Cycling a new aquarium.​
One of the earliest topics a new aquarium hobbyist needs to learn is how to properly cycle their aquarium. There is a ton of information on this process and many different methods on how to accomplish it. There are many different chemical and biological cycles our tank goes through as it matures but this addresses the one most commonly discussed.

The term cycling comes from the process known as the “Nitrogen Cycle”. When a plant or animal decays, or an animal expels waste, nitrogen is released. In our aquariums we initially see this as ammonia. Bacteria converts the ammonia to nitrite and then to nitrate. When we have enough bacteria to quickly convert ammonia to nitrate, we say that our tank has cycled. This is deceiving because the process doesn’t stop at this point and it is never complete. For this reason we need to think of this as establishing a large enough bacteria population to support fish, not completing a cycle. 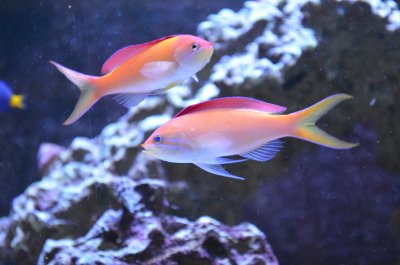 Ammonia is a waste product of a fish’s cellular activity which is expelled through their gills. If the ammonia in the water is higher than in their blood it cannot be released and builds up in the fish causing cell damage. Nitrosomonas bacteria use ammonia as food and convert it to nitrite.

Nitrite is also harmful to fish. In a fish, nitrites hinder the ability of its blood to carry oxygen. Nitrites are a serious issue in fresh water systems. The same receptors in a fish that would absorb nitrites have a higher affinity for chlorides. The chlorides in saltwater block nitrites from being absorbed and protects the fish in marine systems. We rely on a different species of bacteria, Nitrobacter, to convert nitrite to nitrate.

Nitrates are relatively harmless for fish unless it reaches very high levels. Nitrates leaves our tank in any number of ways. We get rid of it via water changes. Algae and some corals can consume it as food.

The last part of the cycle is when nitrate is converted to nitrogen gas. This is done by anaerobic bacteria inside porous rock or within deep sand beds. Not every aquarium has the necessary conditions for this to occur

What conditions do I need for the cycle to occur?

To provide a good environment for the bacteria, we only need to make sure they are wet, oxygenated, and the pH is between 6.5 and 8.5. They will grow best at a temperature close to where we keep our tanks however they will still survive and reproduce at temperatures between 45F and 100F. We also want to monitor ammonia during this process. If ammonia gets over 5ppm it can slow down the rate bacteria reproduce. Above 10ppm it can start killing the bacteria. 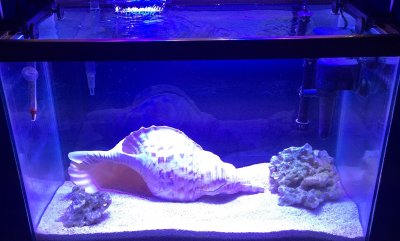 How does rock affect the cycle?

The rock in a marine tank is the core of its filtration system. We use porous rock to provide as much surface area as possible for bacteria to grow on. The water flowing around the rock brings the ammonia and nitrites to the bacteria. If the rock is large enough it may have anaerobic bacteria deep within it that can convert the nitrates to nitrogen gas.

There are many types of rock that are available in our hobby. I won’t get into all of the different types but I do want to address how dry and live rock impacts the cycle

Dry rock is just that. It is rock that has been dried out and has nothing alive on it. Dry rock can be “clean” where it is considered safe to put directly into an aquarium. If it is not clean it will need to be cured prior to use. Either way, it will not contain nitrifying bacteria. This isn’t a problem as nitrifying bacteria are everywhere and it would be impossible to keep them out of our aquarium even if we wanted to.

Live rock is rock that does have living bacteria on it. The main reason to use live rock is to speed up the cycling process. Just like with dry rock, not all live rock is ready to put immediately in an aquarium. For simplicity I am going to put live rock in 2 broad categories. If your live rock came directly out of a marine system and is kept submerged in quality water during transport you can put it directly into your tank. If the rock was exposed to air or shipped damp then it needs to be cured prior to use. The bacteria on this rock will be fine but other living things may have died and should be removed prior to putting it in your tank.

How do I feed the bacteria?

There are many different takes on this and it is largely a matter of opinion. So here are the most common ways from worst to best in my opinion.

Adding a fish – while it will work as an ammonia source, why would you make a fish suffer in an environment in which it can’t properly shed its toxins?

Ghost feeding – When you add food to the tank you are adding much more than just what breaks down to ammonia. While none of it will be a problem, other than possibly algae, this is an uncontrolled process.

Adding a shrimp – The shrimp will decay and create ammonia, but again, this is an uncontrolled process. How much ammonia will this add and how quickly? I don’t know.

How do I recommend doing it?

I’m glad you asked! I’ll start from the point where the tank is set up, filled, has flow, and temperature is in the normal range. It doesn’t matter if you used live or dry rock.

I will either use pure ammonia or ammonium chloride to raise the total ammonia to 2ppm. I will test for ammonia, nitrites, and nitrates daily until ammonia is near 0ppm. I will then dose it back up to 2ppm while continuing daily tests. I will repeat this process in a smaller tank until ammonia goes from 2ppm to 0ppm within 24 hours. In tanks that are 90g+ that will be stocked slowly I will only dose to 1ppm ammonia after the initial dose and consider it cycled when it drops from 1ppm to 0ppm in 24 hours. This is to limit nitrates in larger tanks. Keep in mind that a 120g system that drops 1ppm in a day can support more fish than a 40g tank that drops 2ppm in a day.

But I still have questions!

Ok, let me see if I can answer some of the more common ones.


If nitrifying bacteria are everywhere, why are “bacteria in a bottle” products so popular?

Nitrifying bacteria are everywhere so that isn’t the problem. Some bacteria can double their population in 20 minutes. Luck would have it that these tend to be the more poisonous kind. Nitrifying bacteria are relatively slow reproducers and it takes between 8 and 24 hours for them to double their population. If you start with dry rocks it can take a month or two to produce enough bacteria to support even a few small fish. Using bacteria in a bottle instantly provides a larger source of bacteria to speed up the front end of this process.

My cycle went fine for 3 weeks but now it stalled, what happened?

It could be any number of things. Did you let your ammonia go to high? Do you have a pH issue?

Your nitrifying bacteria may be being outcompeted for resources with other bacteria and/or algae. They may process ammonia fine at first but they will eventually go dormant. When this happens, your cycle will stall until a more marine friendly bacterium reproduces enough to begin the cycling process again. Bacteria in your tank are in constant competition for food. Eventually the one best suited to your specific system will thrive.


Can I vacuum out too much bacteria by cleaning? Will cleaning my sand bed cause my tank to cycle?

Can I use old tank water to cut back on my new tanks cycle time?

You can, but it won’t help much. The majority of the bacteria is going to be growing on hard surfaces, not floating in the water. There will be some, however, so you will likely introduce a strain of bacteria into your new tank that will eventually work very well.

I never measured any nitrite during my cycle, is this a problem?

No, odds are this is not a problem. It is possible that you had a larger initial population of Nitrobacter bacteria (nitrite eaters) compared to Nitrosomonas bacteria (ammonia eaters). In this case the nitrite was processed to nitrate almost as soon as it was produced.

Another possibility is that you have a large population of Nitrospira bacteria. These bacteria convert ammonia into nitrite and then to nitrate within the same cell structure so the nitrite is never released into the water to be measured.

My tank has been empty for 6 months, did my bacteria starve?

No. It is almost impossible to starve bacteria. They will adjust their metabolism and reproduction rates based on the food supply. As the amount of available food goes down, they will process it slower and reproduce less. If they go without food long enough they will go into a cystic stage (typically around a year without food). Once food is available again it will take longer for them to recover from this stage but they are still viable.

This does not mean that your tank is ready for fish after sitting dormant for up to a year. Bacteria is part of the food chain and is consumed by many different organisms. Just because your bacteria didn’t starve doesn’t mean it didn’t get eaten or is still viable. Every aquarium will respond differently based on its unique biology.

Why can I add more fish to an older aquarium faster than a new aquarium?

Let’s say you have 2 identical aquariums set up one year apart. They both have the exact same number and size of fish and both have 0 ppm ammonia and nitrite. They must have the same amount of bacteria, right? Well, no. The older tank will have a larger population of bacteria that is processing ammonia at a slower rate. The younger tank will have a smaller population of bacteria with faster metabolisms. If you add new fish to the younger tank you need to wait for the population to increase which can take days. In an older aquarium, the bacteria only need to become more active which can happen in a matter of hours.

Brew12
Steven Frick has spent much more time under the ocean than keeping a small piece of it. He got his start in the electrical field in the US Navy Nuclear Power program as an electricians mate. After 5 years of service on the submarine USS Henry M Jackson he finished his final 3+ years of service teaching electrical theory at the Knolls Atomic Power Laboratory. Currently, he runs the projects and maintenance for the power distribution system of one of largest electrical consuming heavy industrial companies in the Southeastern United States. He wrote his sites electrical safety policies and routinely acts as a consultant to other industrial facilities looking to improve their electrical safety programs. As someone who loves to both learn and teach, he has focused his attention on his newest hobby, reefing.