Article Reviews (1) Gallery (1) Discussion (250)
Leave a rating
Brown Jelly Disease (BJD) is an issue many reefers have run into. Like most coral diseases, the pathogen causing BJD has not been conclusively determined. Here I will share some observations and test results supporting the idea that its caused by a bacterial pathogen, and so may be treatable with antibiotics.

I'm sure this is not the first time someone's tried antibiotics against BJD, but I haven't previously come across a DNA based study of the results. This is a preliminary investigation based on observations made on my home tanks spanning a few months. It is not conclusive, and is not intended to put the discussion to rest; far from it. It's just another piece of the puzzle as we figure out how to deal with this disease.

Overall my finding suggest that:
Here is the story, including the single case study so far of a tank treated in this way.

A Specific Bacterium Associated with Brown Jelly Disease
Over the last 6 months I've seen several cases where newly imported Euphyllia developed Brown Jelly Disease shortly after I received them. It had all the signs of an infectious disease. A newly imported colony would dissolve in BJD, and several other frags Euphyllia in the tank would also develop BJD if I didn't remove the affected corals quickly enough.

These corals aren't cheap, so my instinct was initially to try to save them (with no success) rather than conduct experiments. But after losing a few Euphyllia from different orders and suppliers my curiosity got the better of me. So the next two corals that developed early signs of BJD (a Hammer Coral E. ancora, and a Grape Coral E. cristata), I let it develop. Once they were in full-blown BJD, I sacrificed and sampled them.

Both of these samples were dominated by a single type, an unclassified bacterium in the genus Arcobacter. To clarify what I mean by that: this is a type that has been seen before, it's a perfect match to a sequence record in public DNA sequence databases. But, like so many microbes found in environmental samples, the species has not been formally described and named. 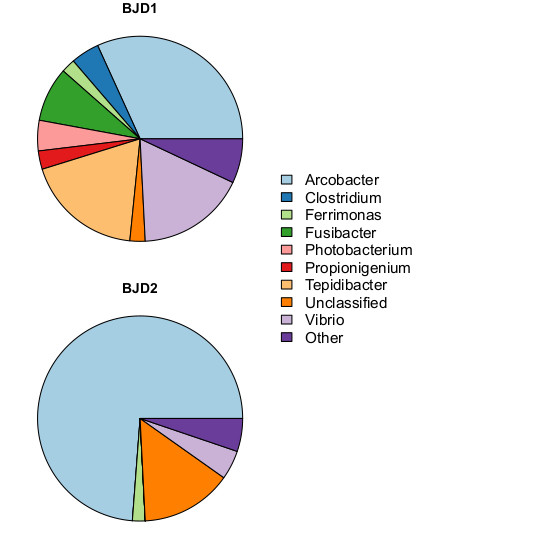 Identifying it to the genus can be pretty useful, though. The genus Arcobacter includes several known pathogens of humans and other animals, including A. butzleri, which is a food-borne pathogen that presents a serious risk to human health. When you sequence samples of two different diseased corals, and find them both dominated by a genus known to contain pathogens, it's worth noting.

It also gives us a good guess at the likely physical description and lifestyle. These are rod-shaped to helical, non-spore forming, and swim in a corkscrew motion using their single flagellum. These occur in association with animals, and also free living in waste water, seawater, and other aquatic habitats.

This information can also be useful in developing treatment strategies, since the members of a Bacterial genus often share characteristic sensitivities to the same antibiotics. We'll get to that.

Infecting a Euphyllia Garden with BJD
Who would intentionally do such a thing?? Not me.

What happened was this. I continued to buy Euphyllia, a fraction of them continued to develop BJD, and I was experimenting with short antibiotic dips. (This approach never yielded much success for me, but there is more work to be done on that front. )

Then one batch of especially nice corals started to BJD within 24 hours after arrival, and I panicked. I decided my Frag Tank must have the BJD pathogen, and I needed to get them out of it. I triaged the new corals, sacrificing the worst cases and transferring a couple that I thought were clean into a different tank... my Euphyllia Display Tank.

This was not my smartest move ever. They were so pretty, I acted irrationally

Next thing you know, both of the new Euphyllia and 4 of my existing Euphyllia in the tank were showing early signs of stress. They all showed oddly deflated tentacles that were not fully extended, and I could the beginnings of some of the characteristic Brown Jelly stuff on the two new corals. I removed these plaguebearers, pretty though they were, from the tank.

So I sampled the water at this point... after introducing the new corals, at the earliest signs of stress. What I found: exactly the same bug (Acrobacter sp., sv1103) at unusually high levels. I found 92 sequences matching this perfectly, representing >1% of the total community. (These were never found in biofilm samples, this analysis is based only on water samples) 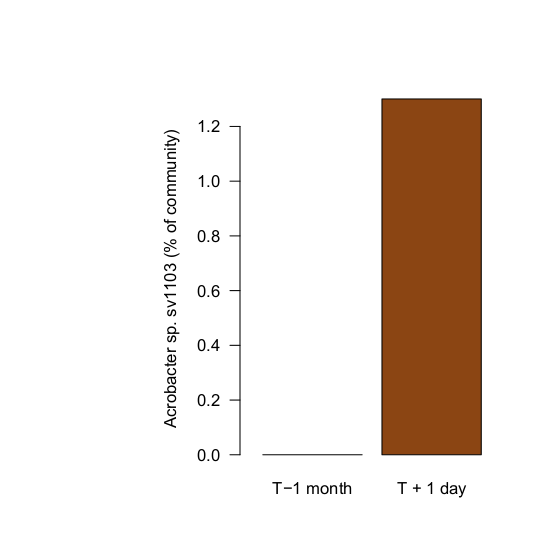 Treating BJD with antibiotics, in the aquarium
What to do? I could remove all the Euphyllia and try a dip, but I hadn't been having much success with dips. So I looked at the tank and realized, the only corals I cared about in this tank were the Euphyllia. Fish are easy to move to another tank if something goes wrong, I have plenty of tanks running with room for a fish or two.

So I decided to take the plunge and treat my whole tank with the antibiotic. Although it's often repeated on the internet that adding antibiotics to your tank will kill the good bacteria, I hadn't seen any evidence of that.

Meanwhile I had evidence an Arcobacter species was associated with BJD, published reports of the antibiotic sensitivity of these bugs, and a tank full of Euphyllia on the verge of succumbing to BJD. So I dosed the tank.

I chose Ciprofloxacin because it is effective at the lowest doses, reasoning that in this way, I could minimize collateral damage. I based this decision on this study because it had a nice comparison of dosage trials for a wide range of antibiotic; I saw several other studies that also supported the use of Ciprofloxacin to treat Arcobacter infections.

Within 24 hours of the first dose, all of the affected corals showed signs of improvement. Their tentacles inflated again, although the remained not full extended. Within 48 hours they were fully extended and looked perfectly healthy again. 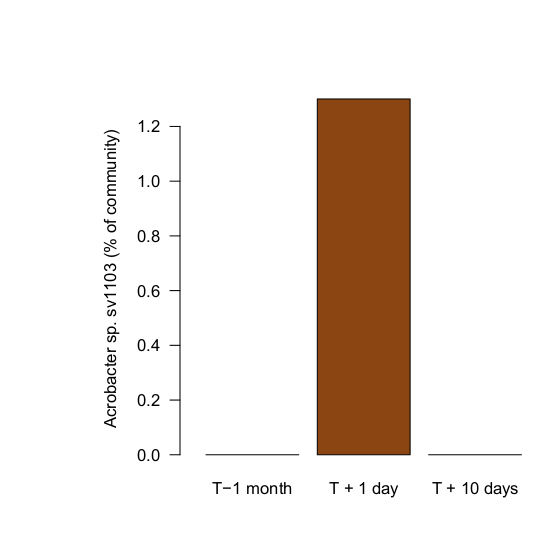 In a future experiment I will address both issues -- this was an experimental trial born of desperation.

But doesn't that kill the good bacteria too?
This is of course a reasonable concern. There's a wide range of views on how to achieve the right microbial community, and how much the various parts of the community even matter. But I think few experienced reefers would say the bacterial community doesnt matter at all. So it makes sense to be cautious about adding antibiotics to the tank and potentially killing off whatever parts of the community you think are important.

But of course the dose makes the poison, and remember that I chose this antibiotic specifically because it was effective against this genus at the lowest dosage of any antibiotics tested.

The system has a moderate bioload with 4 fish in a 40 gallon DT with 30 gallons of sump volume, along with a bunch of corals. There is no algal refugium or macroalgae. So if the nitrifying community were to die, I would expect to see an explosion in nutrients and algal growth. This didnt happen. (I confess, I didnt measure nutrients this time around. I base this conclusion on the lack of algal growth that would be fueled by a rise in nutrients)

More directly, I compared the aquarium microbiome before and after the treatment. Here's a table summarizing the major stats we look at in comparing aquarium microbial communities:

Did the treatment damage the microbial community? Not at all. If it had any effect at all, it was to restore the community to its previous state by selectively knocking out a few susceptible bacteria.

If all a person cares about is the nitrifying community, that was not removed. There was a slight decrease in AOM while NOB were restored from undetectable to a more typical level.

If a person is interested in the microbial functions of the community more broadly, the summary statistics of Diversity and Balance scores were also improved by the treatment rather than harmed. The introduction of diseased corals lowered both scores, and the antibiotic treatment increased both scores.

This point about the broader microbial community can be illustrated most easily with a barplot showing the community over time. In these plots, each color represents a different microbial family. 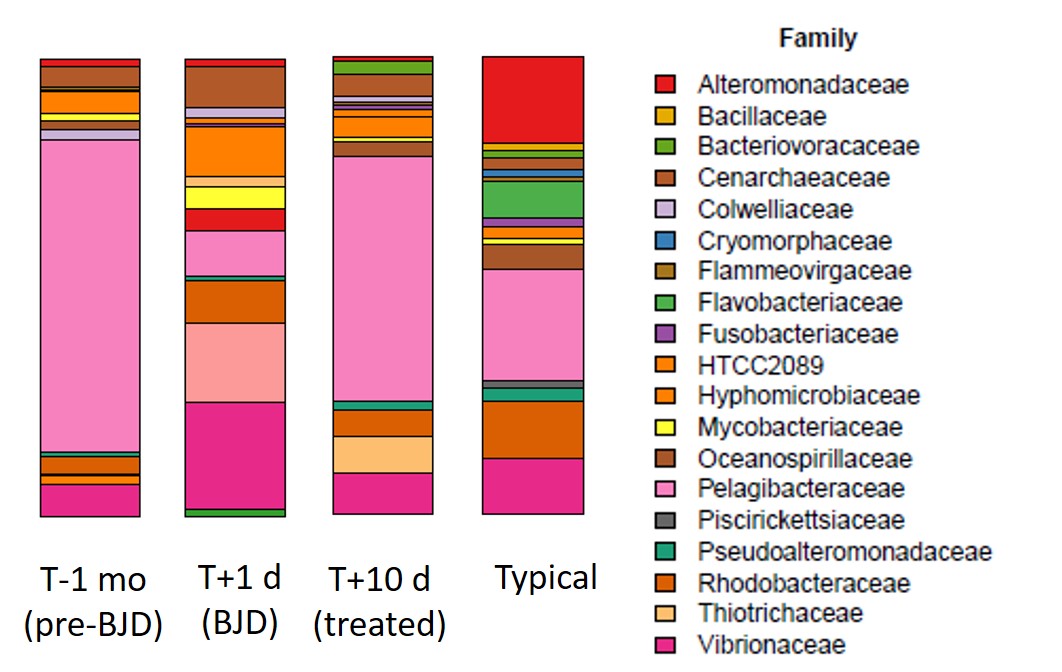 The figure shows that the microbial community was fairly typical before BJD, became atypical during BJD, and was restored to something like its previous state following the antibiotic treatment.

A skeptical reader may point out that since there are no replicates here, we can't be confident attributing the changes to the treatment. It could be coincidence. Perhaps the corals recovered on their own and the microbial community resumed its previous structure after a transient disturbance caused by adding diseased corals. Based on my previous efforts to save Euphyllia with BJD I find this a little unlikely, but certainly not impossible.

Ultimately that objection would be correct and in the future I will do a properly replicated experiment to test this. What I've shown here is a just hypothesis with some preliminary evidence supporting it.

How Common is this Bacterium in Saltwater Aquaria?
In a set of 148 aquariums I've sampled (this is not the entire database, its the "high quality" database made up of normal, healthy tanks with good sequencing coverage), Arcobacter sp. sv1103 is not detectable in a majority of tanks. 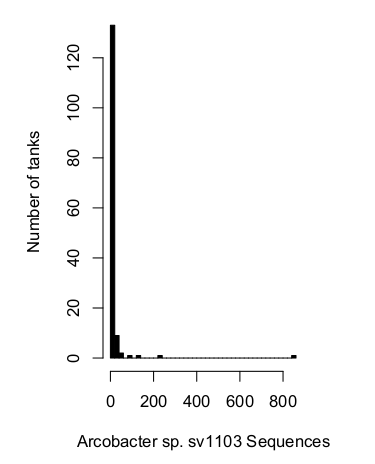 We can express this same idea a few different ways. For the majority oftanks, this sequence was not detected at all (80%). For nearly all tanks (95%), this bacterium was absent or extremely rare (<0.00006%).

This context makes the comparison with my BJD infected tank even more stark. That 1.2% is huge in comparison with the typical levels observed across a large number of aquaria.


Summary
Based on what I've reported here, I hypothesize that infections with Arcobacter sp. (sv 1103) contribute to Brown Jelly Disease in LPS corals, and that these infections can be safely and effectively treated in the aquarium with low doses of Ciprofloxacin. Depending on the results of further tests, this could be a useful tool for the hobbyist community in the fight against BJD.

But I know some of you, like me, enjoy running experiments on your own tanks. Many of us have a bottle of Cipro sitting around. And anybody who keeps Euphyllia is likely to encounter BJD at some point. Anybody want to test this? I'll throw in the microbiome testing before and after if so...

Thanks for reading and may your tanks stay free of Brown Jelly!


[unless you're the kind of person inclined to run experiments with antibiotics on your tanks, so you can help me duplicate this ]
Reactions: tanked4u, #1Fellowreefer, kiswanson and 39 others

Pros: Very detailed and supported with data.
I love your article. Thanks a lot for the useful information.
Read more…