Article Reviews (10) Gallery (1) Discussion (26)
Leave a rating
So, you want to add a Maxima clam to your reef tank. OK, great!

While we normally think of Maxima clams as gold, black, green, or blue, there are some very rare color patterns. The Chimera clam is a rare two-faced Maxima and occur at a rate of about 1 in every few million. 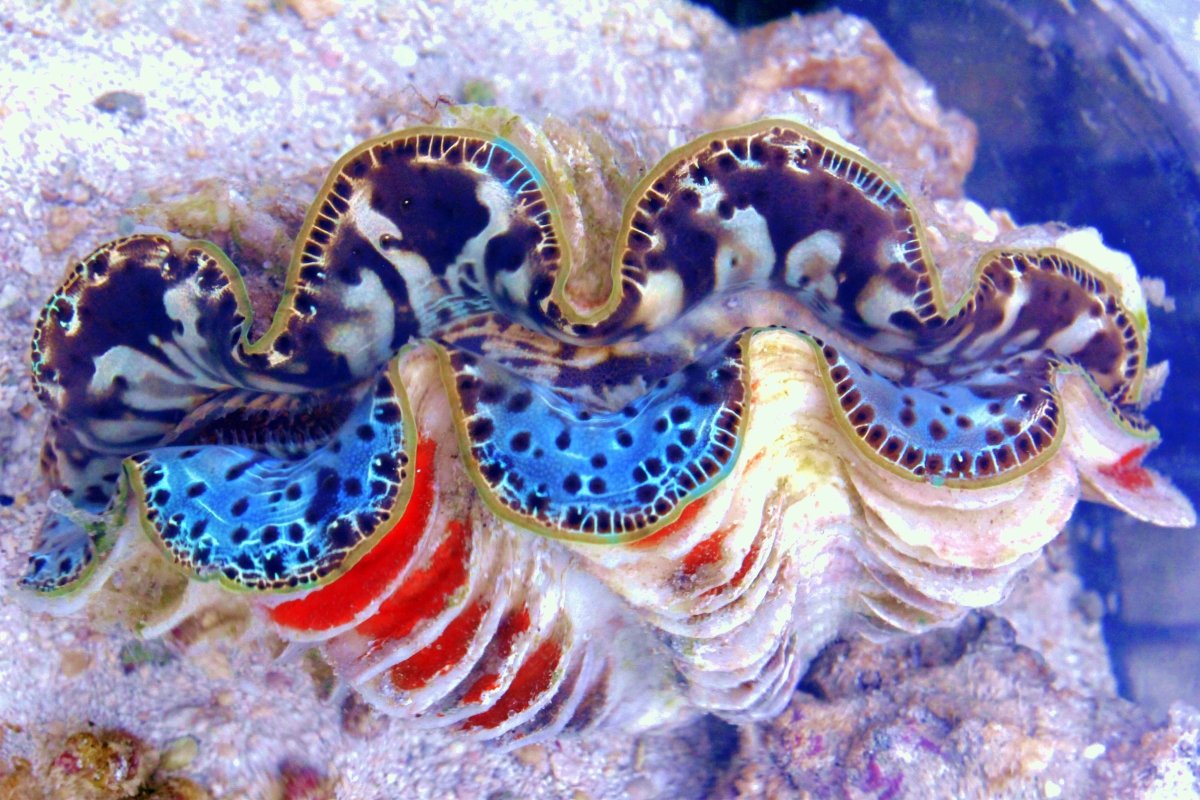 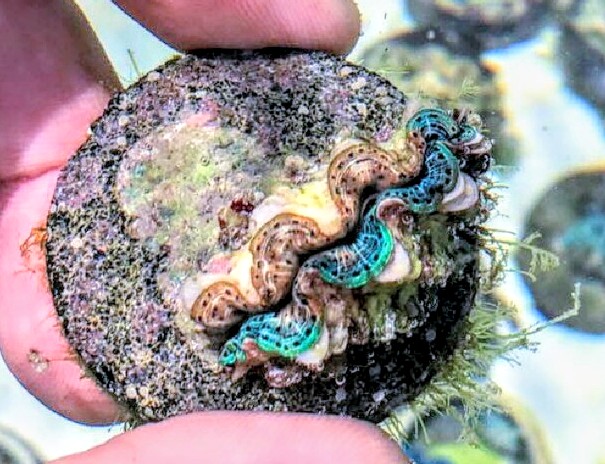 Over the last 20 years I have handled many thousands of Maxima clams and regularly get inquiries and see threads about how to select and keep these amazingly beautiful creatures.

FWIW, here are some of my random experiences and observations.

In 2010 I traveled to French Polynesia to help set up a new collection station and clam farm. Prior to that time I had imported clams from Vietnam and Palau, but this was an opportunity to actually see clams on the reef and be part of a program to culture them. You can read more about my adventures here:
https://pacificeastaquaculture.com/blogs/coral-farming-in-the-solomon-islands

In the waters around the remote Islands of French Polynesia there are hundreds of millions of naturally occuring Maxima clams. So many so that some small Islands that are covered completely in ancient clam shells. 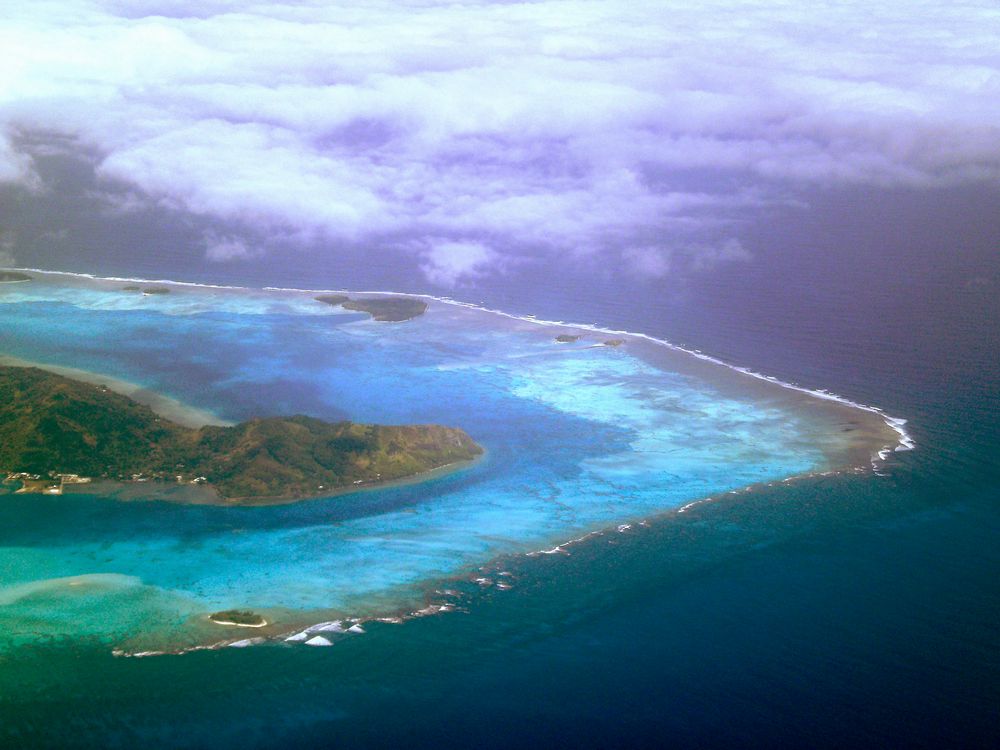 The clams are found within about 1 to 5 feet below the surface under intense tropical sunlight on rock outcroppings in areas with strong water flow. In these remote areas water temperatures can vary from the low 60s to mid 80s. The currents are intense and the water is crystal clear.

These are the typical rock outcroppings in French Polynesia, note the nature of the reefs in this area--scattered outcroppings. In this pic I'm checking clam sizes. Only clams larger than 4.5 inches can be collected legally. 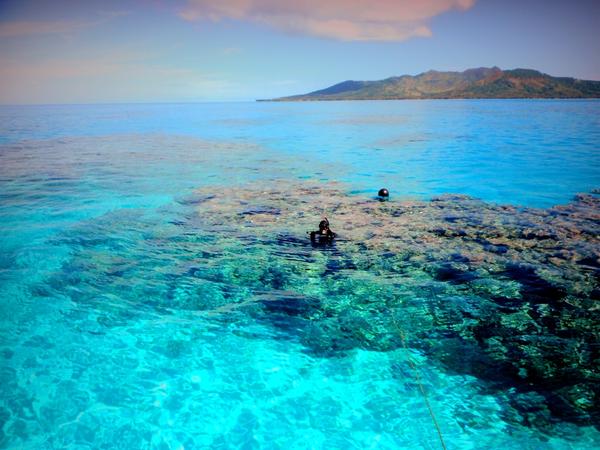 Maxima clams grow embedded in rock. Note that it is common to see Maximas in the wild with less mantle extension than what we normally expect. Also, so-called gaping is a transient observation in these clams. A normal clam can look quite gaping a one time and later appear totally normal. Occasional gaping and mantle extension are not good consistent signs of health, long term gaping over a 24hr+ period or retraction of the mantle is always a sign of imminent mortality. 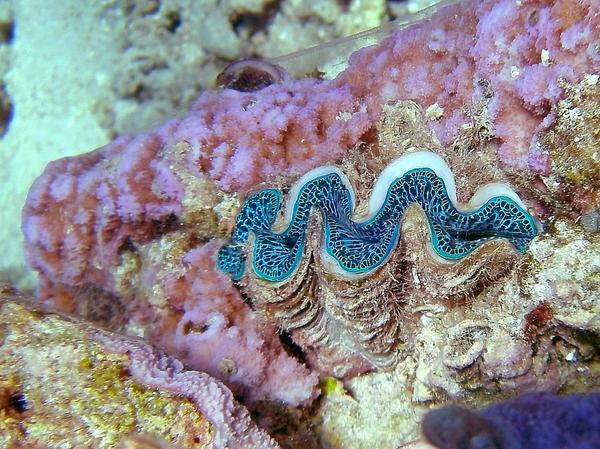 Scuba gear was not available on these uninhabited remote islands, so we would hold our breath, try to secure ourselves from the intense currents, while delicately chiseling a clam from the hard coral rock. Not an easy task!! 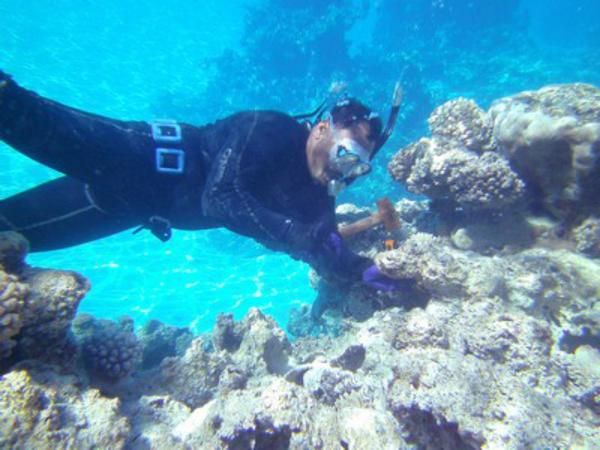 Plus, there are many dangers that lurk in these waters. A huge number of poisonous well camouflaged stonefish, sharks, etc. 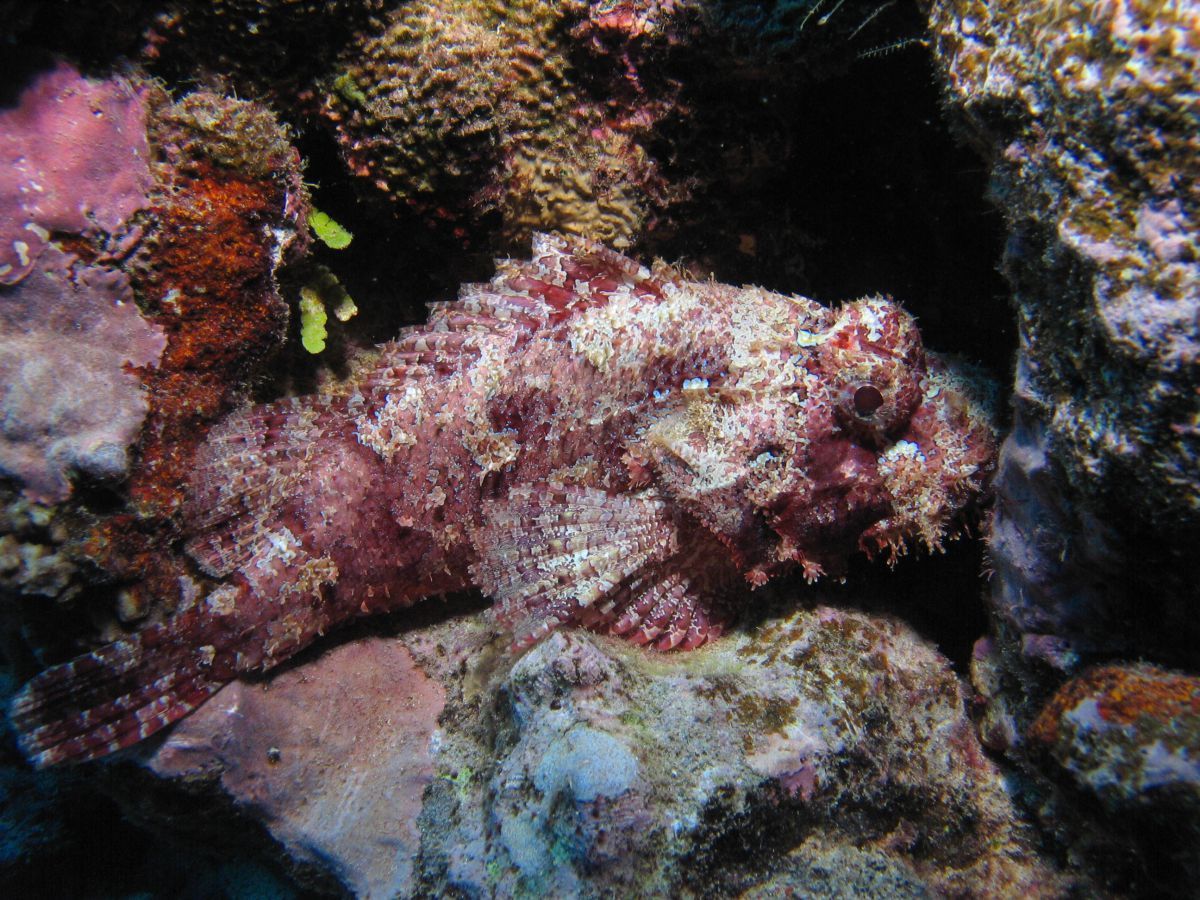 My partner and I planned to collect and sell wild clams to fund the farm and eventually sell cultured clams. Over the next few years we carefully collected many thousands of clams. The clams were packed in water and shipped to Tahiti and then housed at the holding facility and cleaned and prepared for shipping. The shells routinely needed scrubbing for removal of algae, Aiptasia, Pyramid snails, etc. 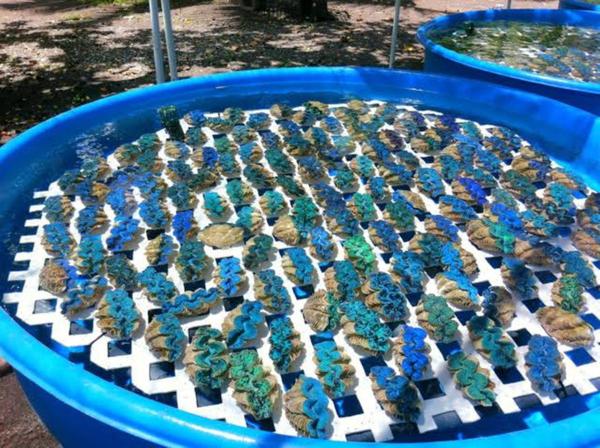 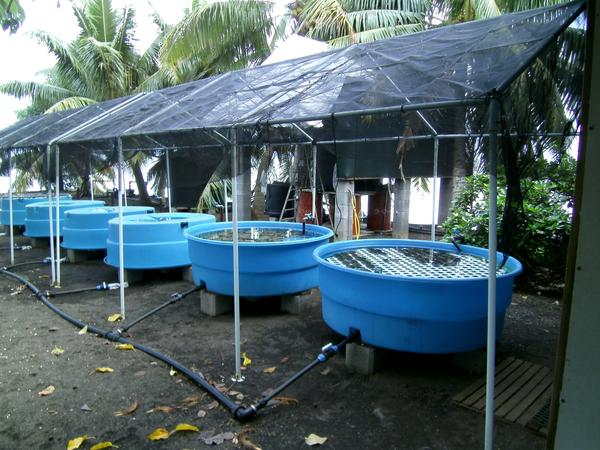 Pyramid snails can be difficult to see. A meticulous scrubbing is essential. These snails will kill the clam if allowed to persist. Once the foot of the clam is no longer embedded in rock, the fleshy foot area is vulnerable. With careful inspection and scrubbing the shell with a brush these snails are easily removed! 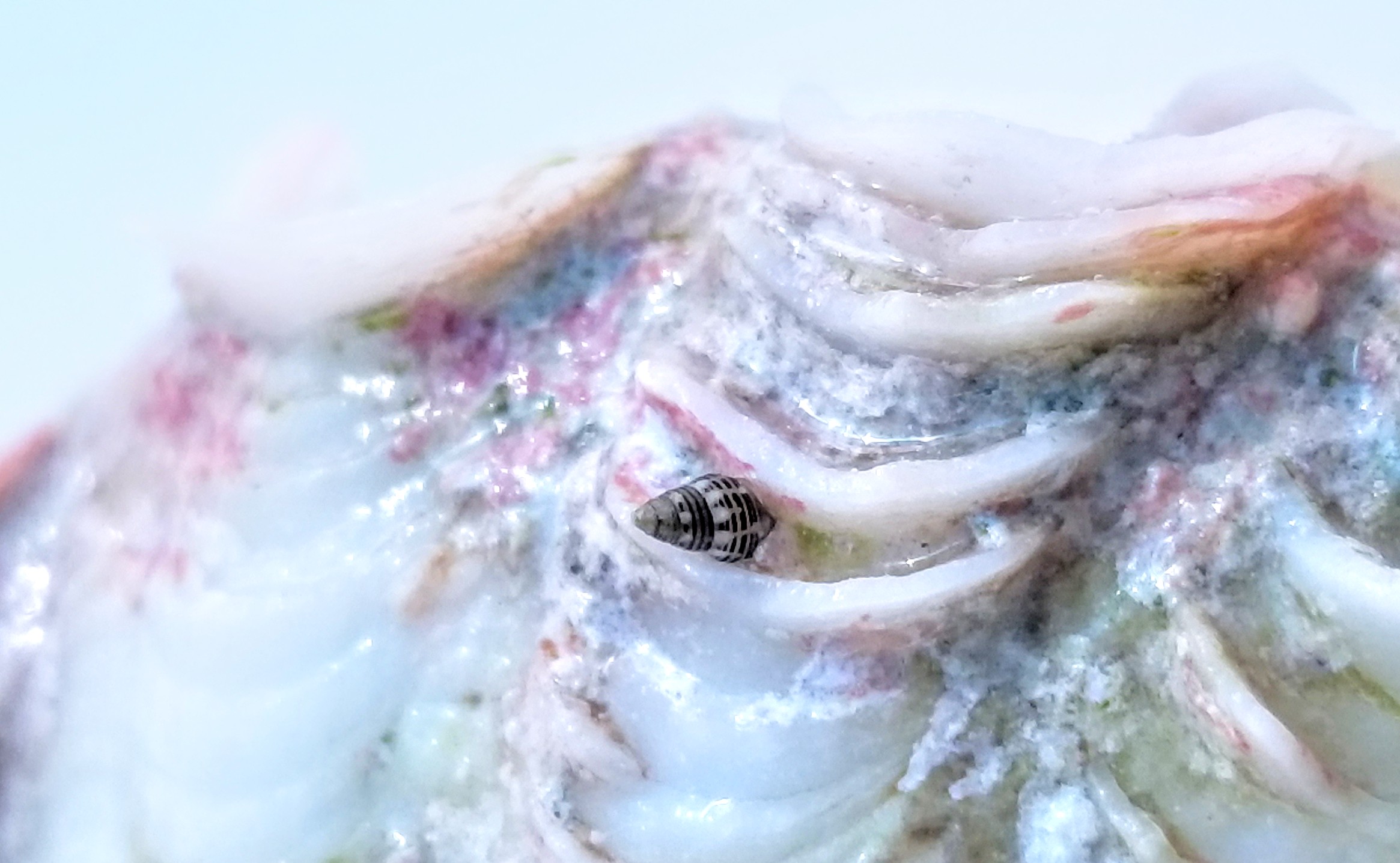 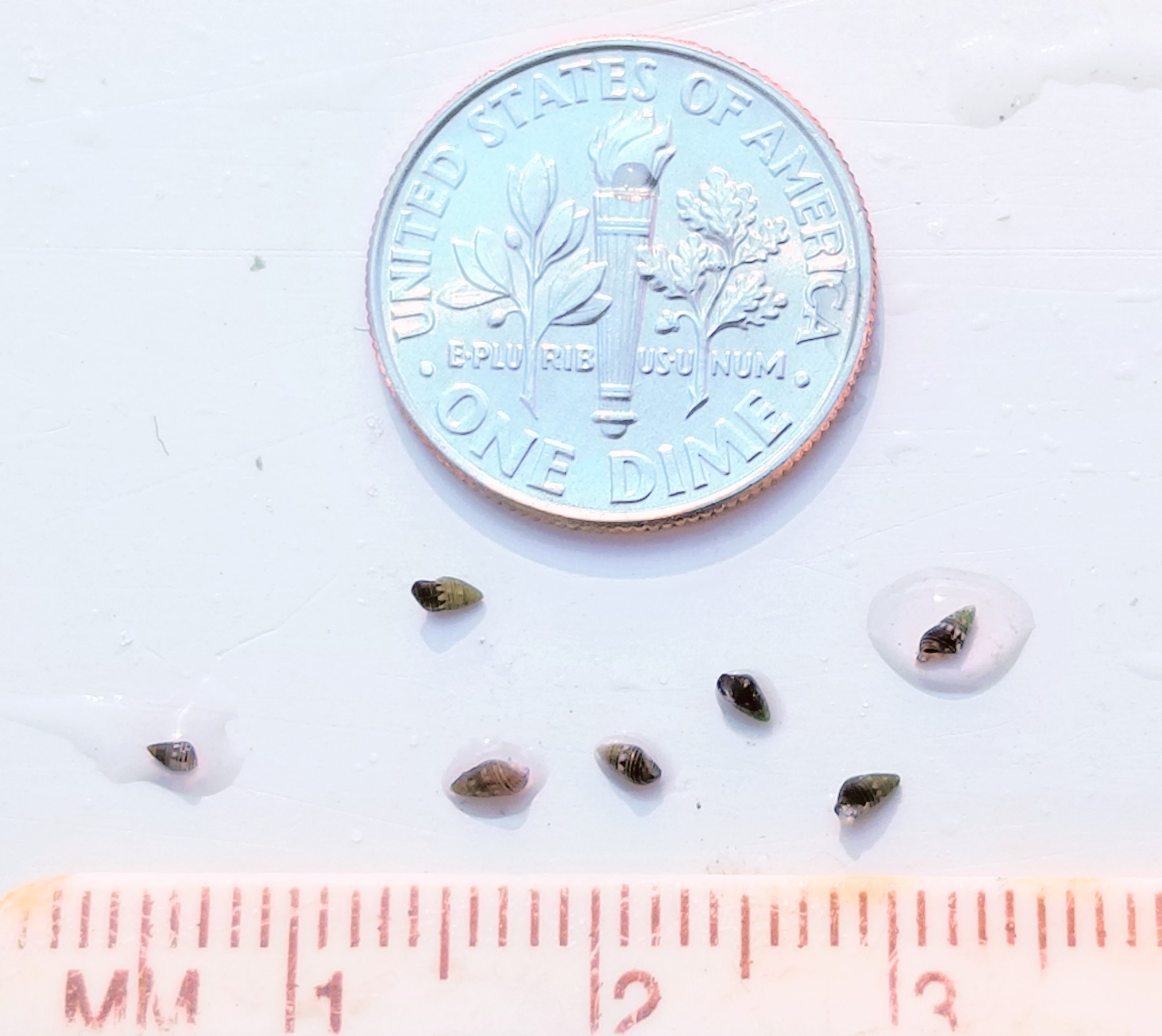 During these early years of the venture we would rotate collection to different islands. The colors and patterns were distinctly different in the clams from different islands. Generally these wild collected clams did fairly well in most well established tanks.

As the years went by my partner became more interested in fish collection. I helped him set up his systems and established a protocol for handling, treating, and feeding the fish prior to export.

Fish collection was easier for him and more profitable and so he hired local divers to collect the clams. These divers were use to collecting the clams for food, not the aquarium trade. Maxima clam meat is commonly sold in food stores in Tahiti. It is also an important strategic economic commodity in the region. The divers did not handle the clams as well as we did previously and usually damaged the foot, and they began shipping them dry to Tahiti from the remote Islands. These practices stressed the clams and mortality levels skyrocketed. Even though we instructed the divers how to correctly collect the clams the mortality rate was still too high. We worked with the local university and government and discovered that the wild clams are infected with Perkinsus.

Info about the parasite:
https://www.eurl-mollusc.eu/Main-activities/Tutorials/Perkinsus-olseni

The stress of rough collection and shipping allowed the parasite to destroy the clams. It was at this time that I stopped importing the wild clams and devoted my efforts to get the farm running. Today I only import and sell cultured clams. They are free of the parasite and generally hardy and easy to keep under a variety of lighting.

To select a healthy clam it is best to ask some questions of the store you plan to purchase from. If they have no or limited experience or knowledge about clams I recommend avoiding the purchase there. Acquiring, preparing, and maintaining clams is a specialty that many stores do not fully understand. Check to see that the mantle is not retracted and that the clam closes quickly when a shadow is cast over it, this is a natural defensive mechanism and a good indication of health if the clam reacts quickly and fully. A clam ready to die will not react well if at all. Not much is known about clam health and diseases or the symptoms of infection or infestation so these basic observations are all we have.

Also look for any areas of bleaching in which part or all of the mantle looks washed out or lighter than other parts. The coloration should be rich and even. If possible, examine the shell and look closely for pyramid snails or other pests. While most are easily removed it is best to avoid any clam with obvious hitchhikers. If possible, examine the foot. It's the open fleshy area on the underside of the clam and is used by the clam to attach to a hard surface. Most folks confuse the fibers the clam produces to attach with a torn foot. See more about that in this video:

Cultured Maxima clams are relatively easy to keep if put in a good environment. Normal reef parameters are fine. Wild clams nowadays are very difficult to keep alive and should be avoided. Freshwater dips or other treatments have been tried and do not eliminate the Perkinsus parasite. If a clam is larger than about 3 to 3.5 inches it is wild collected. No clam farms are holding and growing cultured clams larger than about 3 inches. I recommend avoiding the larger wild collected clams and the practice of so-called saving a clam that is dwindling at a LFS by buying it and trying to save it only rewards the store with income to buy and kill more clams. If you do this you are actually killing more animals than you could ever possibly save. If a clam does not look good at the time of purchase you will not make it better by putting it in your tank. The only exception to this rule is at a swap, so many folks test the clams for light reactivity that the clams soon just stay mostly closed and often have an abnormally reaction in this particular setting. Again, go with a vendor that has experience and credibility that is not trying to just make a short term sale, but rather gain long term reputation.

Clams derive nutrition from the products of photosynthesis and utilization of dissolved organics in the water--they do better in "dirtier" tanks than cleaner tanks. They do not need to be specifically fed. Give them as much light as you can. However, we have kept some cultured Maximas under poor quality cheap LEDs for 5+ years and they are alive, healthy, and growing. Cultured clams about 1.25 inch and larger do not need to be fed. Give them lots of light and consistent normal reef tank water parameters and a firm spot to attach, and then leave them alone! Watch out for any fish that might pick on them including some pygmy angels and the occasional wrasse or tang, beside all the usually recognizable non reef safe fish. They can be placed on the rocks if in an area that is concave so they don't fall over. Never attempt to glue or epoxy a clam, they must be free to open and close and move if they wish. If you place them on the sand then use a ceramic clam cradle or some rock rubble under the clam so it can attach. A healthy clam will attach quickly and stay attached, usually within a day or two. Normal growth, observed by a rim on the edge of the shell of brighter whiter new shell, varies greatly from tank to tank. You might expect 1/4 to an inch or more growth a year. In the wild Maximas grow to about 12 inches.

That's about it for now. I'm sure I'll think of some other tidbits and post more including more pics and videos.
Reactions: nanocrazy4life, attiland, Txdragonslayer and 42 others

This is exactly what I was looking for as the wife would like to have a one in her tank. Beautiful selection!
Very informative. Thanks for furthering my knowledge on clam care in captivity
Been a huge clam fan for years and started collecting them once again with my lagoon tank. Love the top down look of clams and now I have at least 1 of each type available. 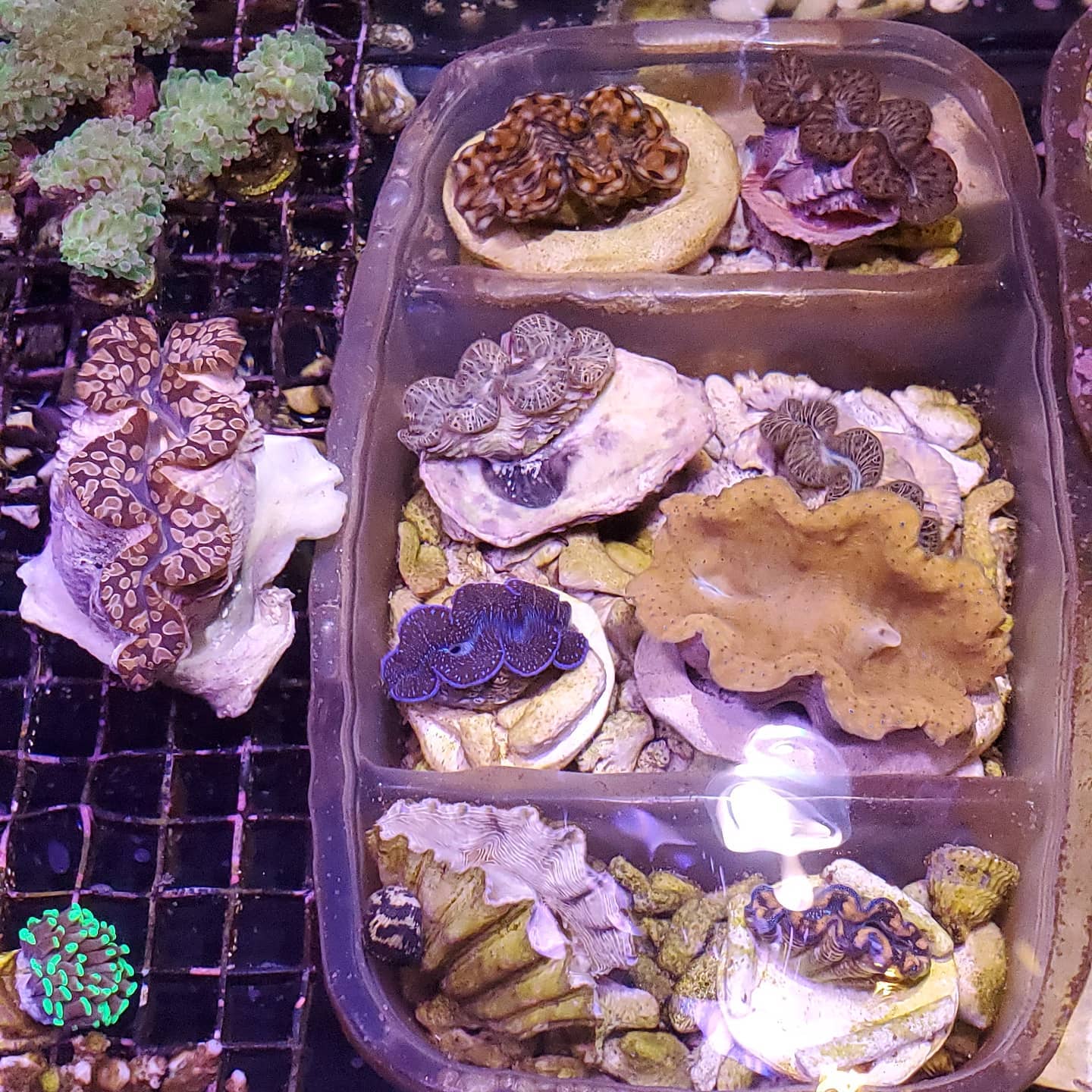 Reactions: nanocrazy4life, attiland and Txdragonslayer
Loved reading this article and gave a lot of insight into selecting a proper clam and caring for it in your own tank. It was very interesting to see a culture farm get started from start to finish!
Omg those are so beautiful. Too bad I have two puffers and a zebra eel. Might not be a wise addition.
Read more…