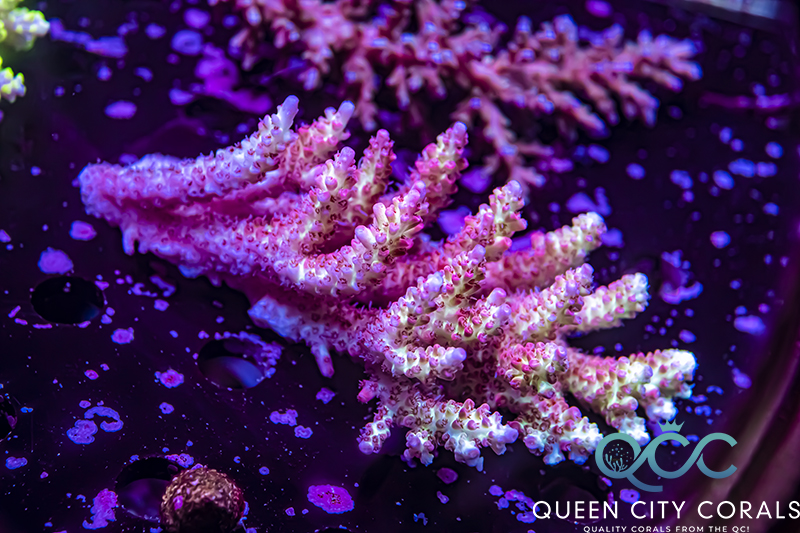 There are tons of great resources that talk about the benefits of higher pH on coral growth but many of them merely use anecdotal evidence from their own tanks, and while this is great there are tons of variables on our own reef tanks and it is very difficult to apply these results to the thousands of different tanks around the globe. I also would like to mention that the majority of reefers have no need to chase their pH, soft corals will be largely unaffected by pH as long as it is within a range of 7.8-8.3 and stays consistent. It is also important to note as I will demonstrate later in this article that you can grow stony corals at any pH from 7.8-8.3 just fine and many methods that are used to increase pH can cause more harm than good.

As an aquarium store that grows many of our own corals, we want to get every little bit of growth out of our tanks as possible. Because of this and the recent discussion in the reefing community, I have been researching the effects of higher pH on coral growth and while there have been some awesome resources from reefers and companies displaying the benefits of higher pH, however, I also find tons of value in experiments performed by the scientific community due to their ability to remove most extraneous variables and focus on their dependent variable. I have recently come across three articles, the first Ocean acidification effects on calcification and dissolution in tropical reef macroalgae, which examines the effects that lower pH has on the calcification process of macroalgae. The second Effects of light and darkness on pH regulation in three coral species exposed to seawater acidification, which looks at the impact of lighting and pH on coral calcification. And finally Decreased light availability can amplify negative impacts of ocean acidification on calcifying coral reef organisms, which exposes coral and macroalgae to high and low light as well as high and low pH.


The secret to higher growth rates​
While these articles all look at slightly different things they all demonstrate the same basic principle, no matter the coral, no matter the algae, calcification rates increased at higher pH. And this is usually where most resources on the subject stop. Higher calcification means higher coral growth means I should run my pH at 8.3 via a refugium, CO2 scrubber, fresh oxygen for my protein skimmer, or a myriad of other methods regardless of the time or cost. But it is important to look at the results of these experiments and look at the nuisance that exists in this very complicated mixture of biology and chemistry.

These articles don’t just present their results and say higher pH means more growth so I don’t think that we as a hobby should do that either. The common idea that all three of these studies show is that pH has no significant impact on calcification rates during the day for pH values that are consistent with those in most reef tanks. The real difference in calcification rates is when the lights are off, all three studies showed that in both algae and corals calcification rates, at pH ranges from 7.8-8.3, only had a significant decrease during dark hours. This often-overlooked caveat to the commonly held belief that higher pH means higher growth is extremely important when it comes to changing your tank’s pH to get better growth.

While these results did vary slightly based on coral species the variability is something that seems obvious to hobbyists, generally easier corals like Stylophora and Pocillopora were less impacted by lower pH while more typically delicate Acropora species were more impacted by lower pH even during the day when calcification rates remained very similar. Dark calcification rates were seen to decrease by between 40-155% in corals however most of the calcification occurs during the day so a 155% decrease in dark calcification rates translated to just a 48% decrease in growth. This 50% decrease in growth was also shown at a pH of 7.7 a level that few established reef tanks run at. Another interesting finding is that lower pH is more harmful to growth under low light, “Low light significantly reduced growth rates of A. millepora by 96% compared to controls”, this is an astonishing finding that show the impact of other factors on growth that act with pH (Vogel et al. 2015).

Where do we go from here?​
This information is all great, but how do you apply it to your tank, how have I applied it to my tanks? There are a couple of things that I learned from these articles and hopefully, you too can understand is that the catchy headline of “Increase your coral growth by 50%!” is grounded in really good science but has been co-opted and ground down into an easily applicable number of 8.3 which is the pH that we all want to hit. The question becomes how do you get there rather than why do you want to get there and there really is a set of questions you should ask yourself before continuing on with your quest to get to 8.3.

*One important thing to remember is that if your alkalinity is too low you will most likely have low pH, and for many people slowly increasing their alkalinity to around 8-9 DKH will greatly increase their pH.*

The first is what corals are you keeping, something common with all parameter chasing is that it varies based on your tank. If you have a softie tank with an LPS or two then I would say if you can add a refugium with some ease and cost-effectiveness then go for it! There are tons of other benefits to refugiums outside of increasing pH so I see no issue making a small change to hopefully get a benefit.

The next question I would ask is what is the status of your tank? There are 3 basic answers to this, the first is: horrible, my corals aren’t growing and I have random occasional die-off. If this is your answer then I wouldn’t worry about pH because you likely have bigger issues that need more attention whether its Nitrate or Phosphate issues, lighting, flow, or even some sort of predator, increasing your pH isn’t going to help any of these issues and it is only going to take time away from you addressing these issues. The second answer to this question is: amazing! Everything is growing quickly, I regularly test my parameters and everything is doing amazingly! If this is your answer then don’t change anything because it is only going to risk your success with an endless cycle of tweaking and tinkering that leads to instability. If it ain’t broke don’t fix it! The third answer is: good but not great, my corals are all healthy and I test my parameters regularly and everything is stable and within acceptable ranges, but my corals are growing very slowly and don’t look as good as they could. If this is your answer then maybe.

The final question you should ask is what is your pH and what is your plan to increase it. Now there are many answers to this but the best ones in my opinion are if your pH is below 8 especially during the night try and get it to at least above 8 first with a refugium and secondly by increasing your water changes and exporting more nutrients as this carbon build-up can lead to lower pH, and finally if that doesn’t work try to increase the ventilation of the space by drawing in fresh air for your skimmer or just opening a window when you can or adding a fan to increase the circulation of air in your house. If your pH is at 8 or 8.1 I would recommend the same things if you really want growth and have the time and money to spare, if you don’t then don’t worry about it and just enjoy your amazing tank! If you do have extra money and time then I would recommend the same methods as above with the possible addition of an additive that raises pH but does not affect your calcium or alkalinity if your tank is smaller, or if you have a bigger tank running a recirculating CO2 scrubber on your skimmer.

But all of these solutions should also be implemented in a way that makes sense with the science we just learned. For example, if you are running a refugium make sure you have the lights on when your tank lights are off, if you add a fan to the room where your tank is make sure it is running at night when the biggest impact of low pH is felt. Also, get a PAR meter and make sure that your lights are at the proper intensity for your corals because even with lower pH lower lighting has a greater impact on coral growth.

Conclusion​
These results show if nothing else that corals are extremely complicated and increasing your pH to 8.3 won’t magically give you 50% better growth as some may have you believe. Instead, it is about examining your system as a whole and looking at the multitude of factors that are impacting it, and diagnosing what does what and also how they affect each other. The reason this is a rewarding hobby is because it is difficult to have an amazing tank and even with all the gadgets in the world you still have to put in the work to make your tank look stunning.
One thing that I don’t want to do with this article is that chasing numbers is the way to have a successful reef because there are tons of amazing tanks with a pH of 8.1 and even 7.8. The point that I would like to make is that you don’t need to spend money getting the next great thing to achieve the next great parameter, but rather look at your corals and learn what they look like when they are happy and what makes them happy. Because they are living things and there is no one size fits all recipe for coral growth so it is important to understand your specific tank and maintain stability within it. I can confidently state that the best tanks are the ones that are stable because even if they aren’t getting the best growth or coloration they are able to maintain long-term growth and are far less likely to crash due to tinkering.

A very well reasoned and researched article and worth a read. Excellent points particularly regarding the benefits or NOT of adjusting the PH variable with sound recommendations based on your current tank performance. Great to see the scientific sources referenced as well.
Reactions: REEFUNLIMITED. and Roli's Reef Ranch
Read more…