If I don't start playing catch up, I'll probably forget something...

Rewind to a few weeks back and I participated in my first ever live sale. Reeftide's Pot of Gold Sale. I literally spent 8hrs glued to my phone hitting refresh. It was definitely fun, but also a little much for me and the family being glued to my dang phone all day. I didn't want to miss a really good deal or one of a couple frags I was hoping for. All in all I bought 10 and received 1 freebie. Here is what I got:

Shipping was fast and well packaged. I was very pleased with that. Everything appeared healthy as well. I have had them all for nearly 3 weeks and everything is doing well except for the splatter hammer. It started great, but after a few days it receded a lot and got the pinched tentacle look. Long story short, it has lost lots of tentacles and has been sitting in a low flow/area for a couple weeks now. I'm not sure if it'll make it or not.

Now for some photos! 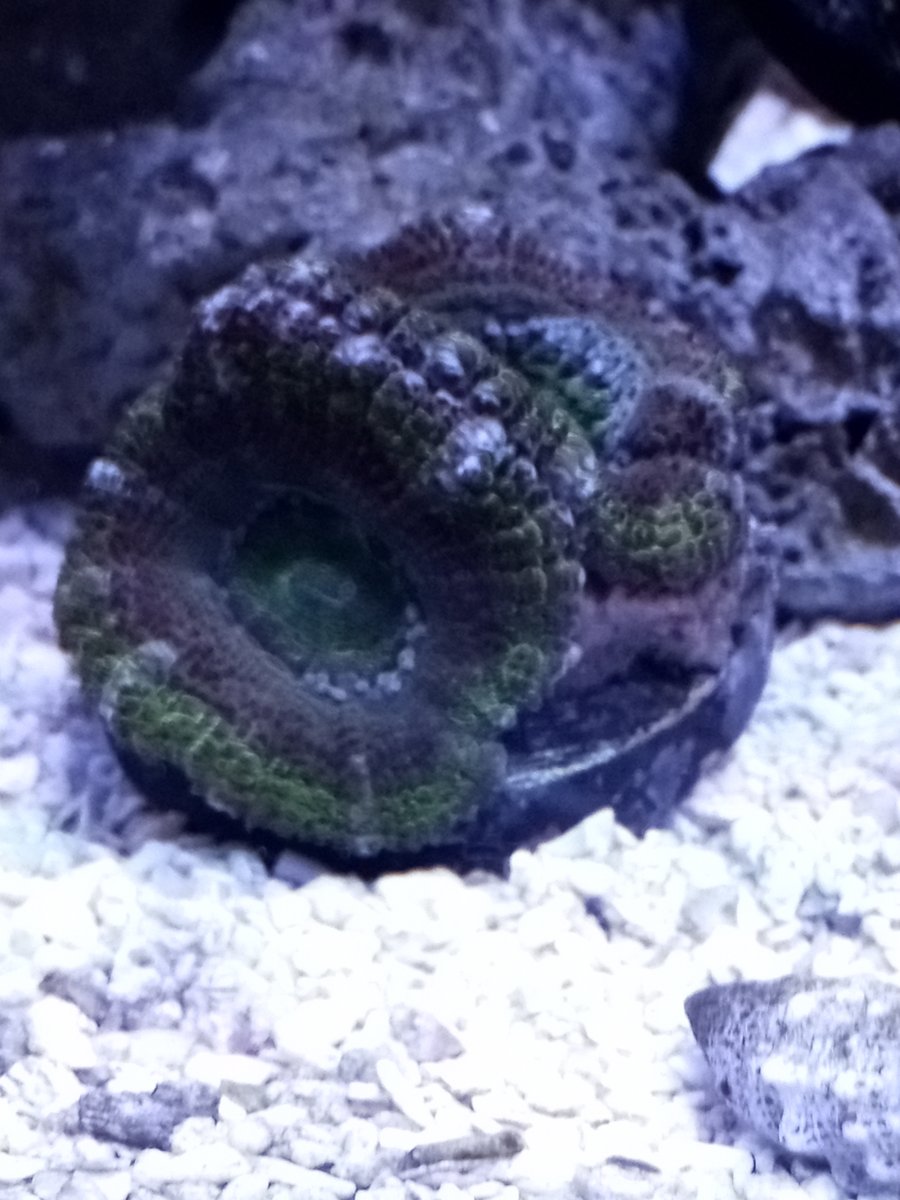 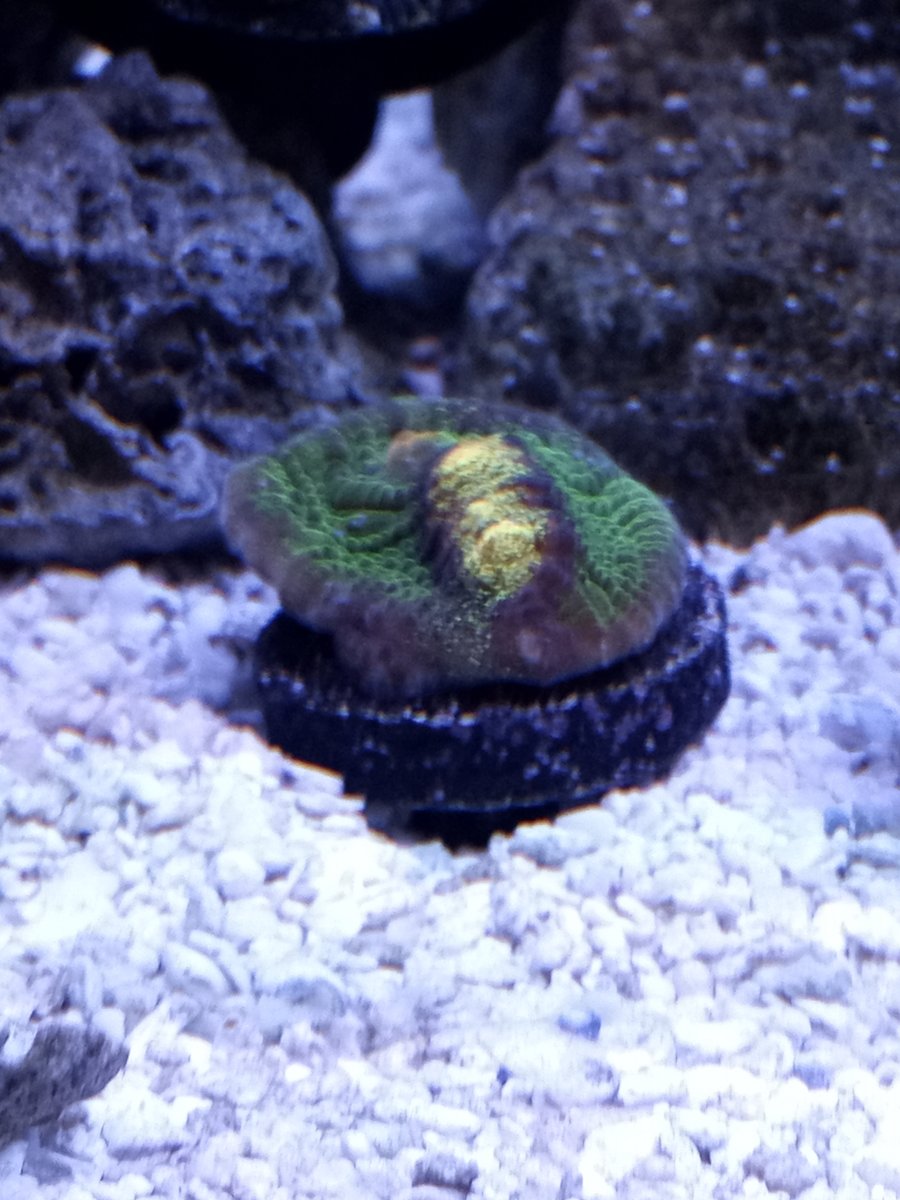 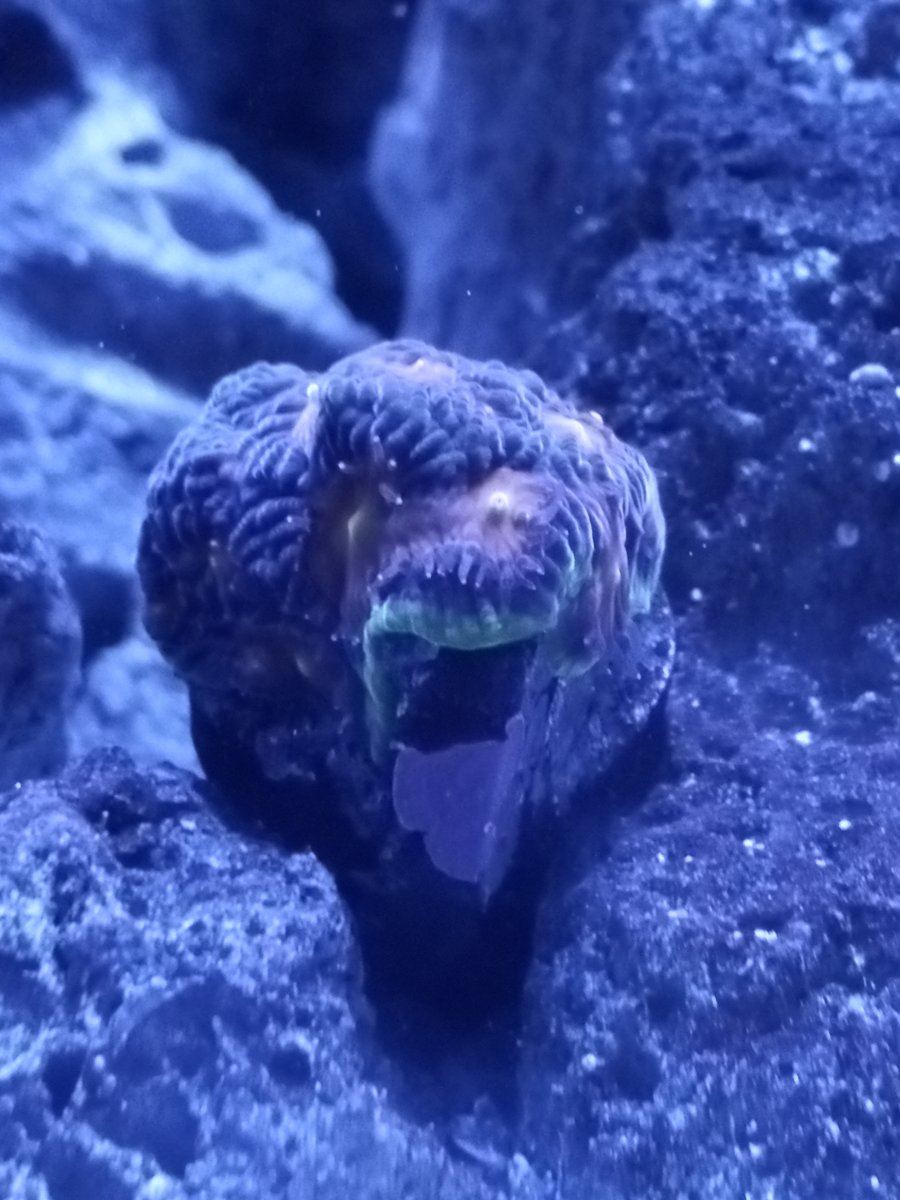 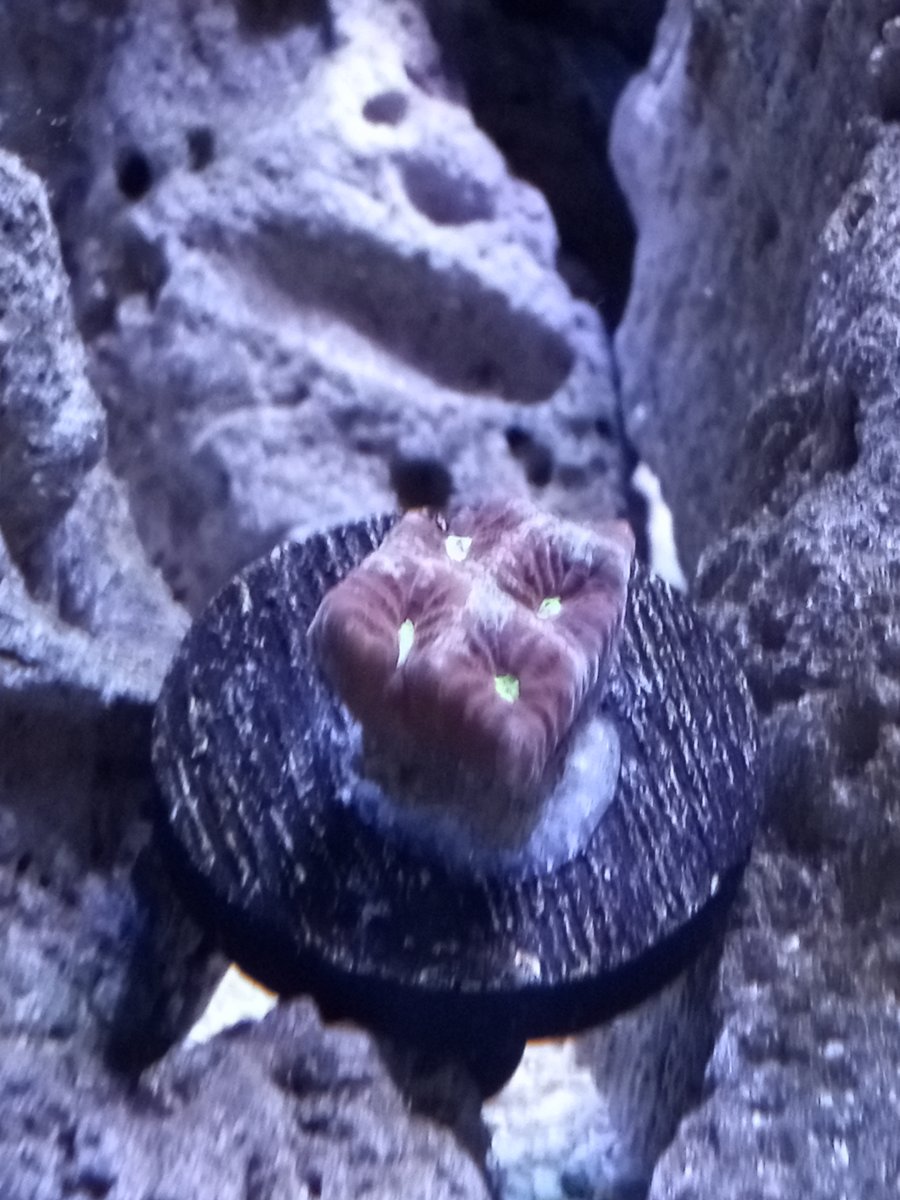 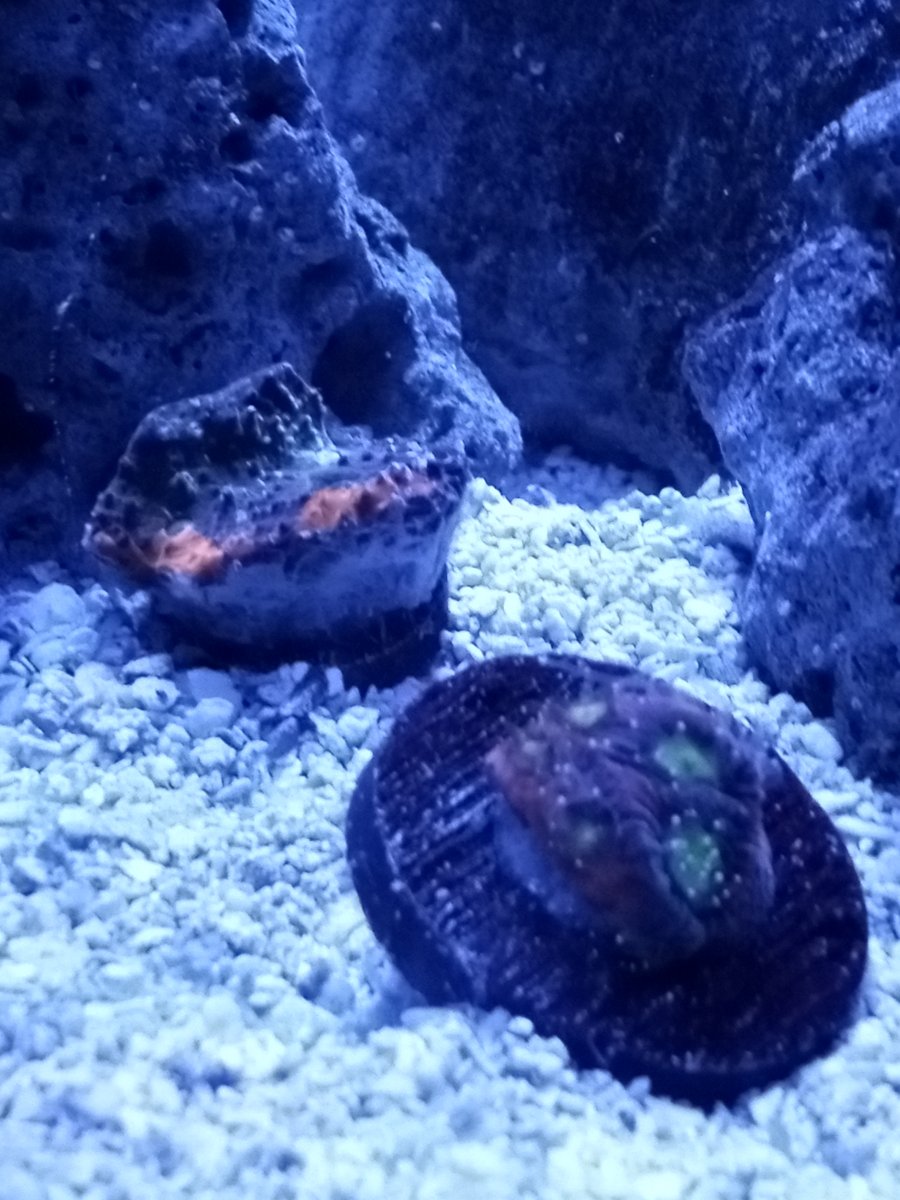 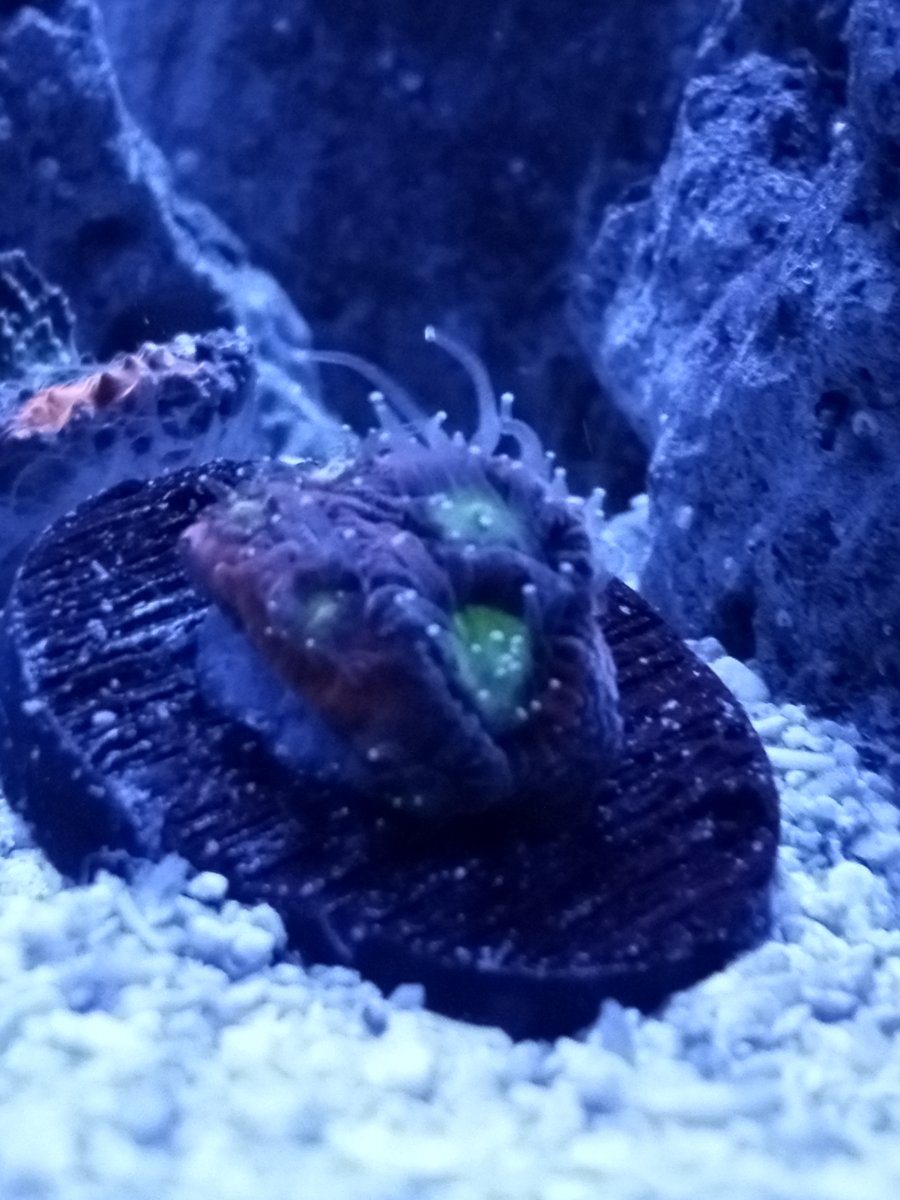 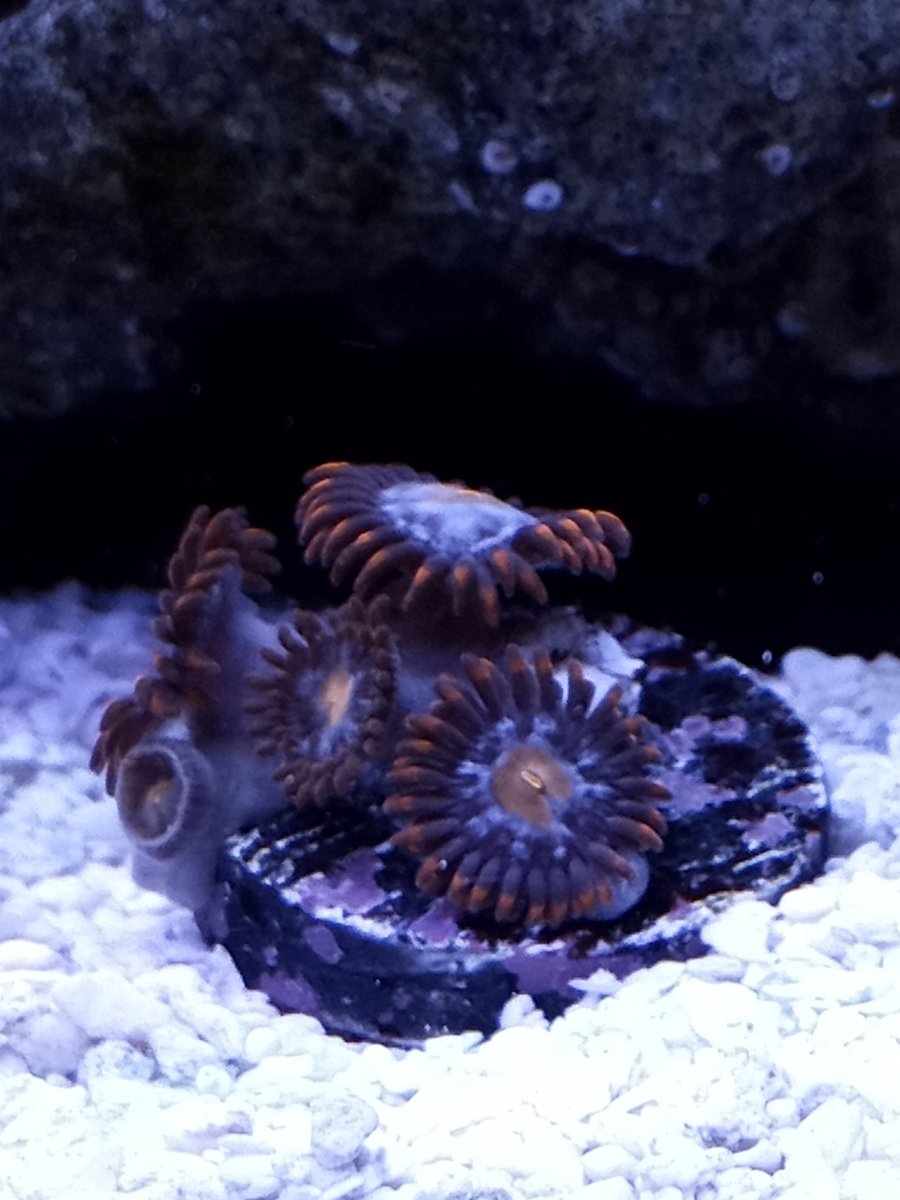 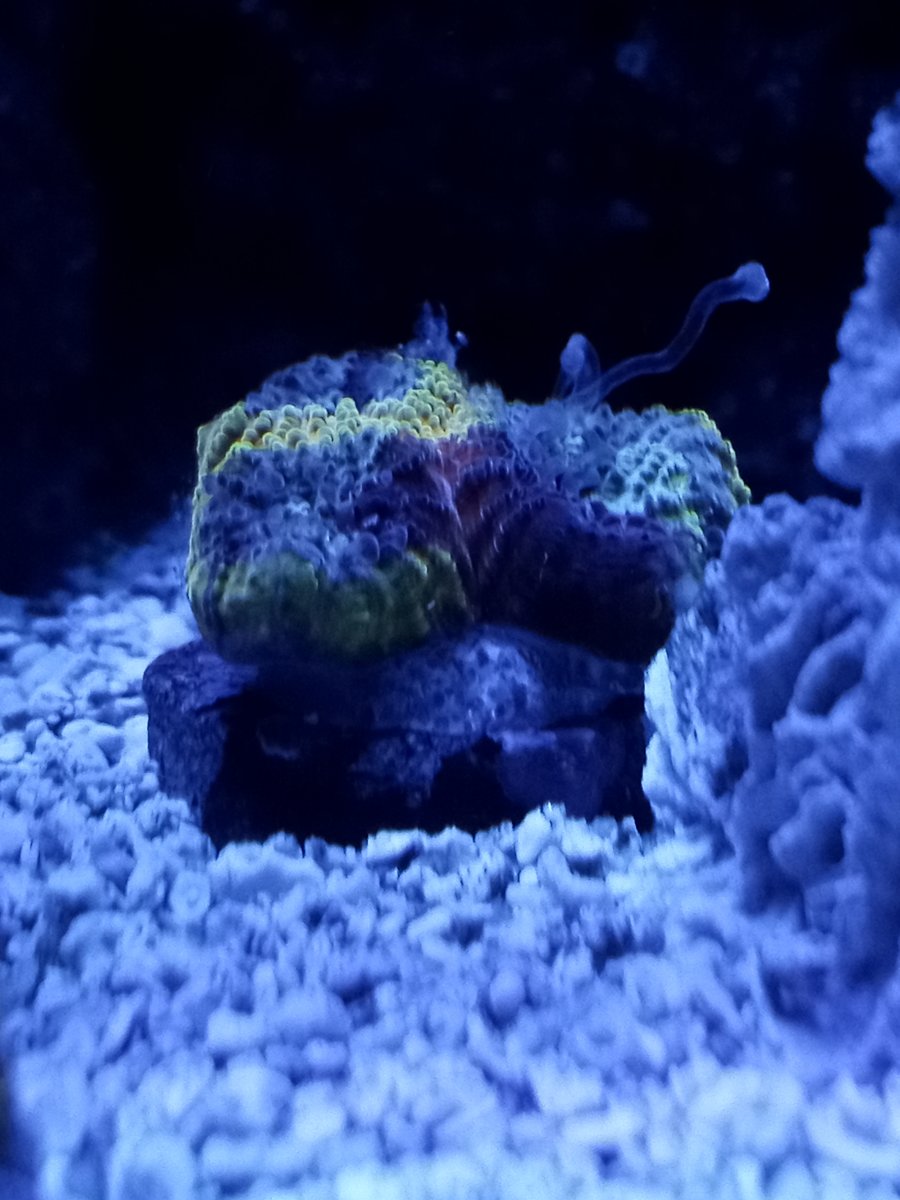 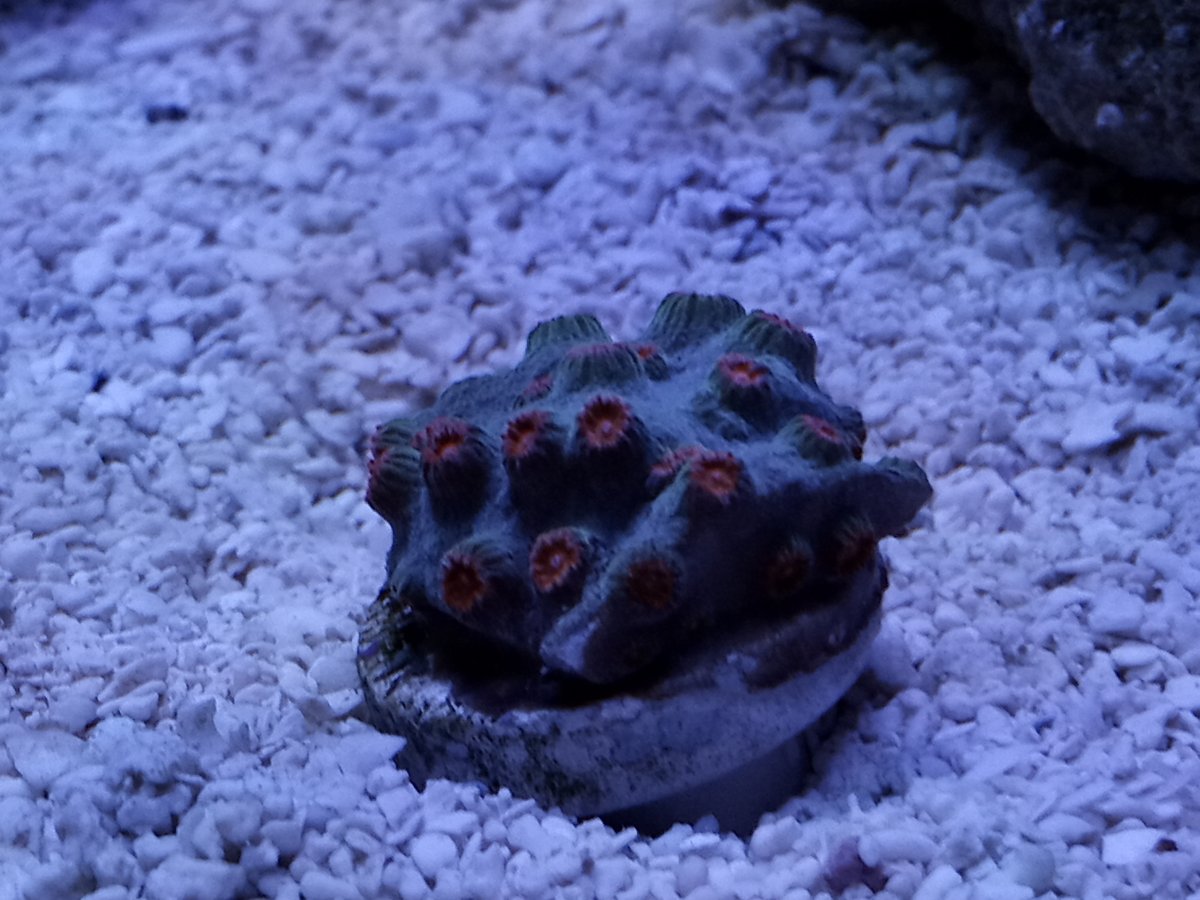 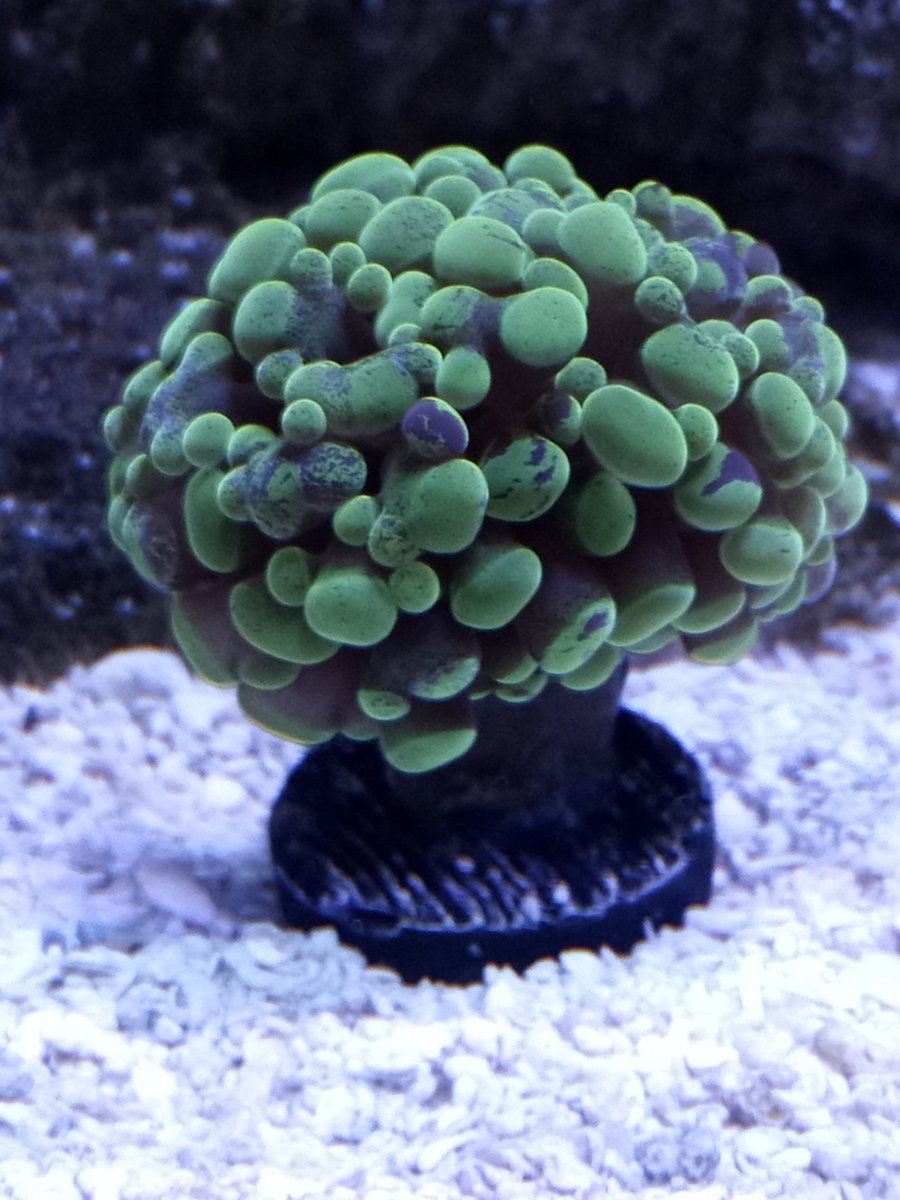 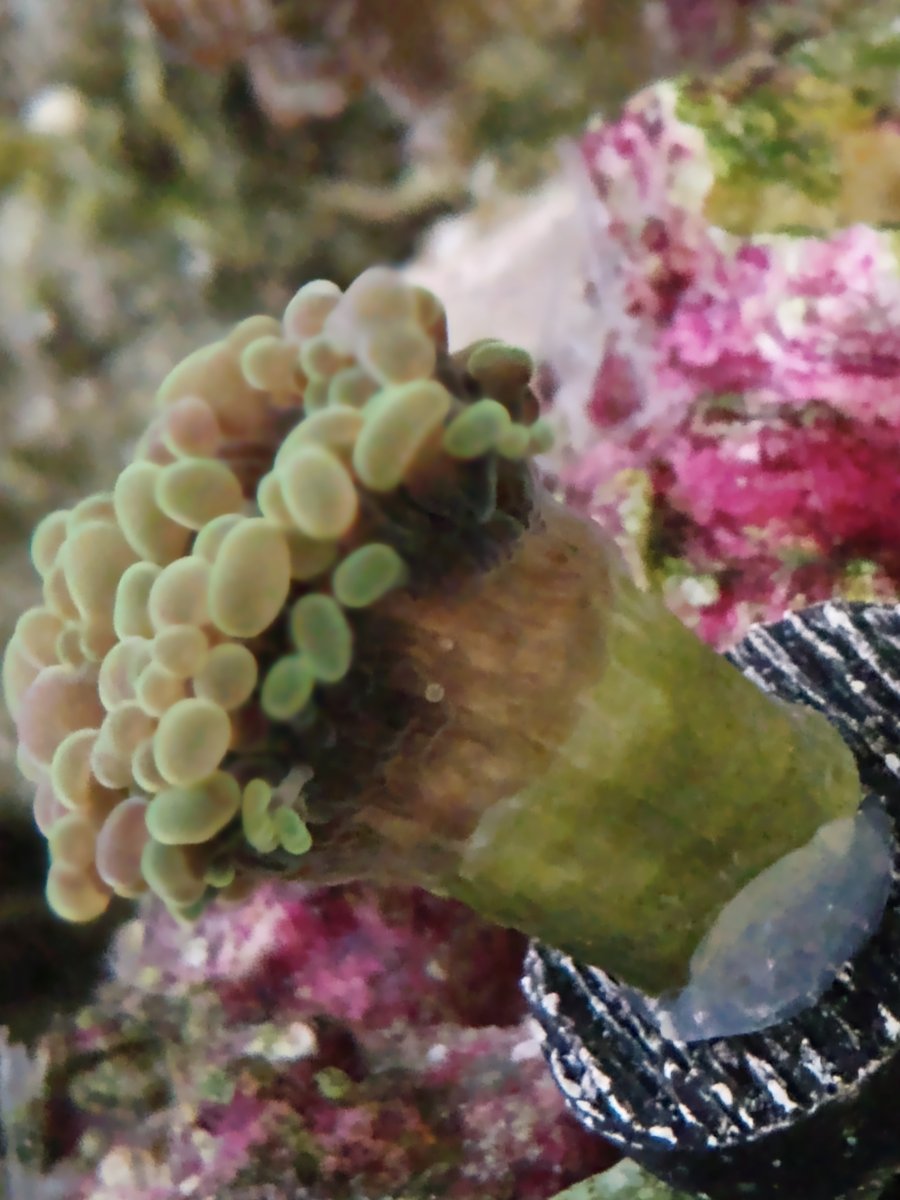 On the same day that my coral shipment arrived, the BRS order with the new RODI filters, Hanna phosphate checker, and Salifert magnesium test came in as well.

The magnesium was reading 1125 that day and 1090 the next. Wow, that's really low. I decided it was time to start dosing. I couldn't go to the lfs for a couple days, but when I did, I picked up Fritz Alk, Ca, and Mag. The person working at the store told me to just dump half the bottle of magnesium in and see what it reads. I was told you can't raise it too fast. I wasn't sure if that was accurate so I did some research and just followed the directions on the bottle which had me dose 125ml. It took several days of raising it by about 120ppm/day, but it finally arrived at the 1350+ range. Alk was dropping at the same time during Mag dosing and I wanted calcium bumped up a bit. I was testing twice a day for about 10 days straight. I have to dose everyday and have been able to sustain Alk at 7.7, Ca 395-400, and Mag at 1350-1425 currently.

As for phosphate, the Hanna first tested at 0.31, then 0.55. I wasn't sure if it was accurate or not because I made some rookie mistakes such as spilling reagent powder and shaking the bottle causing mico bubbles. I only have 10 packs of reagent so phosphate isn't tested often. The past 2 tests have been 0.41 and 0.39. I believe these to be more accurate.
Obviously this is quite high. I'm looking into options to safely drop them while not blowing the bank and causing more work than needed. I did clean out the skimmer and placed it in the tank. After 3 days of running, phosphate was 0.39, but nitrate dropped to 5ppm. I really want it at least 10 like it has been so the skimmer is not currently running. I'm curious if high phosphate is why my corals, more specifically zoas have stopped growing? They are all looking great, just not growing.
25 packs of reagent have been ordered, but they aren't due for delivery for a few weeks.

Lastly, everything on my RODI has been changed out. Membrane, sediment, DI, and 1 and 5 micron carbon. It is making water at lightning quick speeds. 70ish minutes vs 4.5hrs previously. I've since overflowed the jugs twice...
OP
C

Now that I've been dosing, I've noticed my lps looking a lot better. The toadstool as well. Tomorrow will be 2 weeks of consistent good levels of calcium and magnesium. Alk was pretty stable before. Generally 8.45-8.6 and only occasionally 8.3. Since dosing, it's sitting at 7.7.
Phosphate is the next parameter to tackle.

While the new hammer continues to struggle, the original hammer is really taking off. It's splitting a 3rd and possibly a 4th head right now.

One other thing I forgot to mention is that I sold my green agave, green paly, and Nirvana. With all of the new corals coming in, it's time to get more selective on what we have. I didn't want to, however, my wife insisted and has been complaining about those for weeks. What's funny is she chose 2 of those...
The zoa/paly garden is forever changed.
OP
C

Last update for now. A week from today I'm taking the family to the Indianapolis Children's Museum. Afterward, I'm picking this up.

I've been wanting a Mccosker's Wrasse, but they've been non-existent in my area. Thankfully someone on here has one. I'm really looking forward to getting him!

That's it for now, folks. There is yet another major update as well as several other things things, but I'll save that for next time.
OP
C 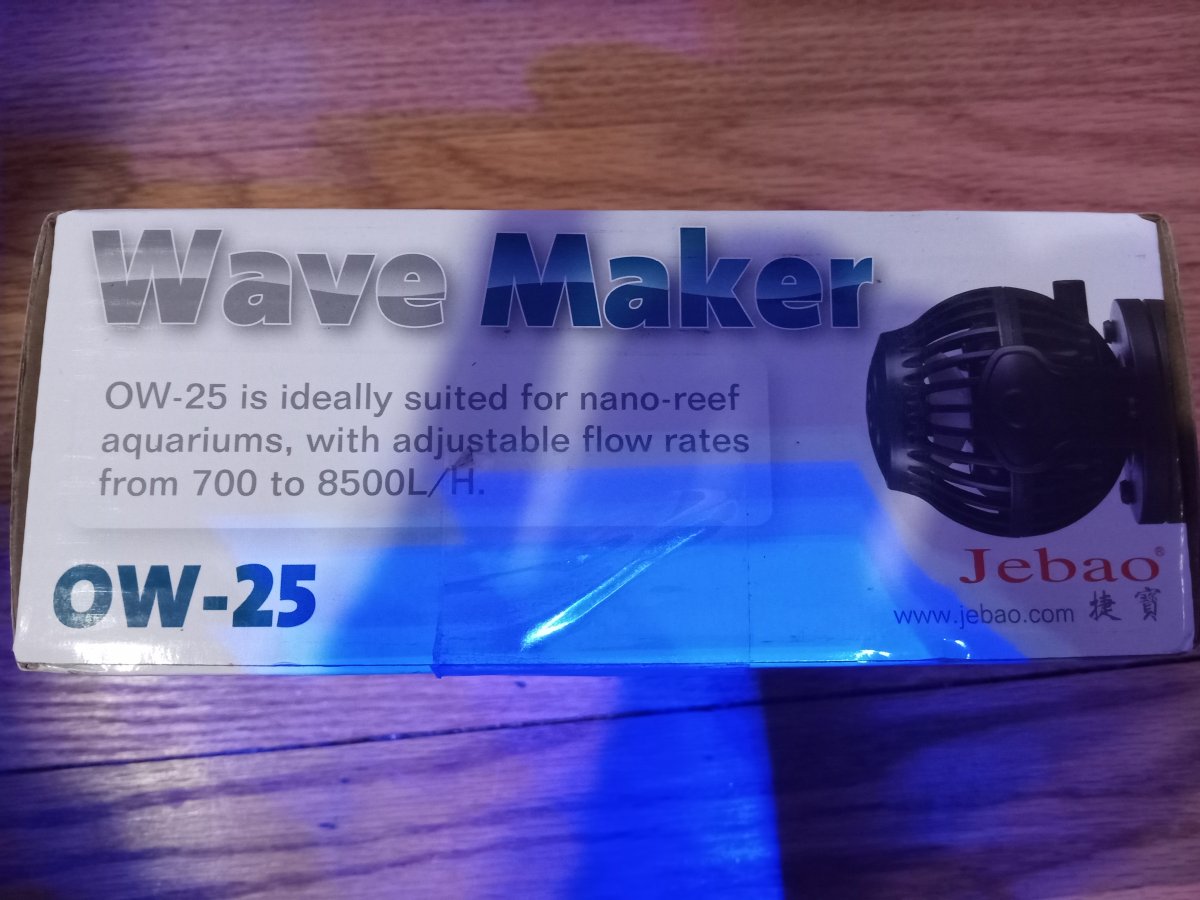 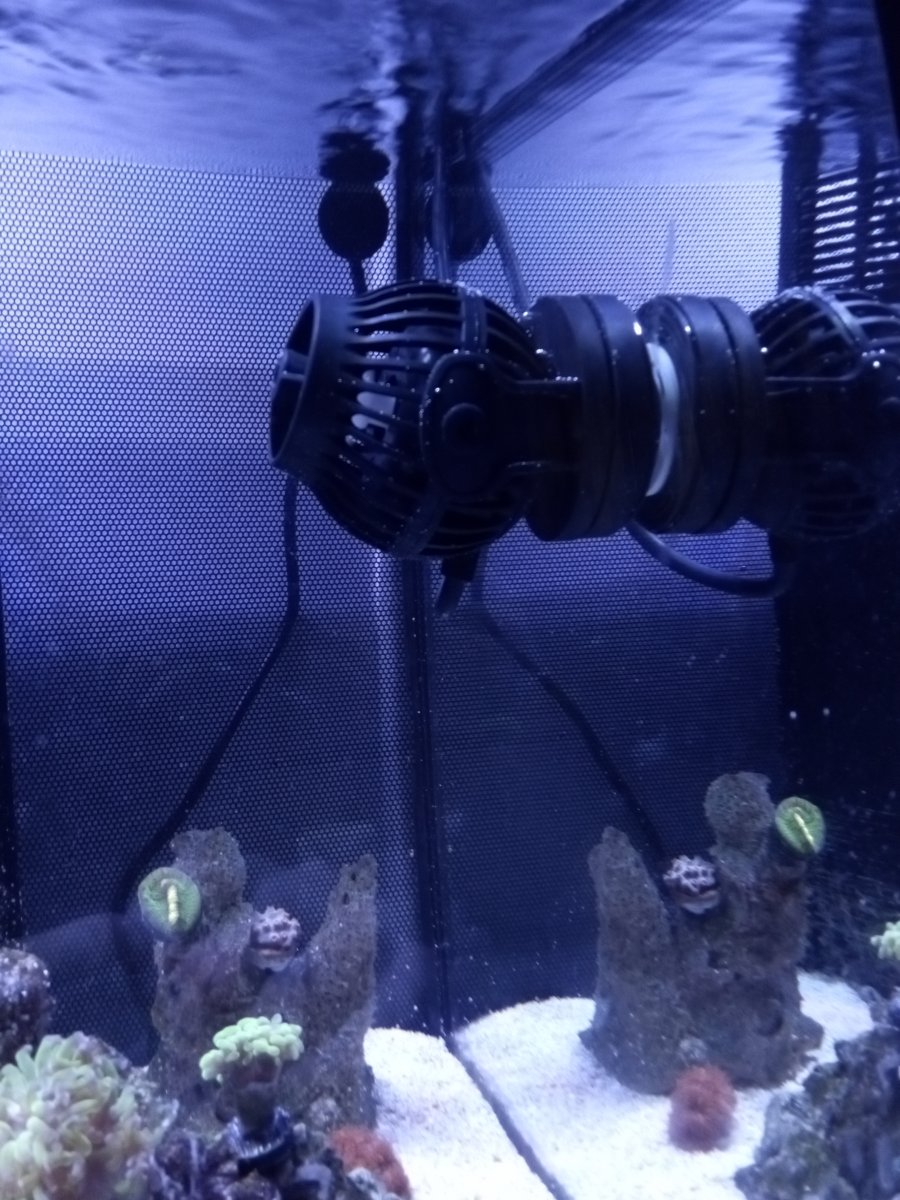 I compared the reviews between the OW-10 and 25. The 25 was supposed to have much better power overall and it definitely doesn't disappoint. It's only been running a few hours now, but I currently have it set at level 3, random flow. What a world of difference compared to the Hydor 240. I'm still using one Hydor on the opposite side for the time being. I plan to upgrade that side to an OW-10 in the future. I'm not seeing the big dead spots as before and the water surface is receiving phenomenal agitation. No more dust all over the surface.
The clowns seem to enjoy playing in the hefty current, but the RG has yet to come out of the rocks.

Dang, nearly 2 months since I last posted on this thread. I've been incredibly busy with a new job and life now that it's warmer out. I still can't post much of anything right now, but in a nutshell, all was well with my reef right up to almost the 4 month mark. Then, the majority of my corals, especially the zoas, began melting and withering away quickly. After about 2 weeks of not knowing what was wrong, I realized my nitrate test kit was super inaccurate and my nitrates were actually 0 for probably 3+ weeks. I ordered Brightwell Neonitro and after about a week of dosing, most corals began bouncing back. I did officially lose my Utter Chaos. The first coral loss. Some others are hanging on, but not sure if they'll make it or not. There are some corals that are thriving relatively speaking as well.
That's all I have time for. Maybe a better update with photos will come soon. Tomorrow, the tank officially hits 5 months!

Thursday at 6:34 AM
Mrsirtang
M