vetteguy53081 said:
Ive tried 4 different foes and everyone went after my zoa and in turn evicted. No More for me
Click to expand...

This may help answer the question for me whether or not I will include zoas in my reef... no way I'm giving up foxes for zoas by personal preference for the fish.


Lost in the Sauce said:
Well you should impressive. I read that all wrong. I thought you worked, where the fish were coming in. Not had homie at work that reef.
Click to expand...

Ah, I see how it was confusing. I wondered why you asked.
Yes, I have a co-worker who has had a 125-gallon FOWLR for years and another co-worker who used to keep a 75-gallon FOWLR until he moved houses and had to sell it (which was fortunate for me as my introduction to the hobby!). Now the latter is interested in getting a tank again or at least in us setting up and keeping a tank in our office.

At least there is a reasonable chance I'll keep the 10-gallon QT running at work for now in case I need it for shipments.

Dont give up what you love. I just probably wont try another anytime soon.
OP

Small update:
A video of my Mertensii butterflyfish in my work 10g QT:


...and a video of one of two scissortail dartfish (the other is hiding under the fake coral) from an LA order of three but one was DOA:


Nothing much else to share other than that most of my fish continue to do well in my QT's with some losses shortly after shipping. I should have some time to make good progress on my build in the week after Christmas (in which I am taking off work).

Due to losses covered by guarantees, I have some credit with LA and SaltWaterFish.com, but I am holding off using it until they have the right fish available. I also don't like this cycle I am in with continually more spending for continually more losses, so I plan to try to communicate with my Westerly LFS about fish orders and try to get fish through them rather than having them shipped with higher losses.
OP

Well, my Work 10g QT scissortail dartfish are out and swimming about, but I did not bring my camera to work for any pictures/video. They have been mostly hiding or staying near the bottom up until now... Now they are darting about and investigating the tank after I fed them this morning a couple hours ago!
The Merten's butterflyfish is still quite active and doing great! There is a net-scrape wound on the top of its snout that appears to be healing and does not seem to affect the health of the fish.

My QT at home has a nice community of fish that will hopefully be rehomed to my 125-125 build in a month or so if I can make enough progress on the build right after Christmas.

They can take time to get curious and explore. Glad they are out and about. Healing snout is a big plus!

Mibu said:
They can take time to get curious and explore. Glad they are out and about. Healing snout is a big plus!
Click to expand...

I'm especially glad to see the dartfish healthy and curious since one of them was not doing well at all when it first arrived. It was laying on its side on the bottom of the bag and continued to do so in the acclimation bucket and when first introduced to the tank, though it would dart if disturbed. I thought it was not going to make it, but it seems to be doing great now!
...not as much can be said for the one of the three that was DOA, though I did try to acclimate it as well just in case it was just shock or shipping stress... sigh, now I have more credit at LA again...

P. S. The darting hovering swim of scissortail dartfish is quite fascinating to me! I'm hoping to have 4-5 in my reef.

I love dartfish. If they are allowed to be out and about, not harassed and bullied into hiding. Great fish all around!
OP

Saltwaterfish.com delivery today with 2 more 4"+ Fiji bicolor foxfaces (Siganus uspi) and a 2.5" raccoon butterflyfish (Chaetodon lunula), all fat, healthy, and doing well now in my Work 10g QT after acclimation!
Foxies are hiding (as expected) but raccoon is out swimming about nicely: 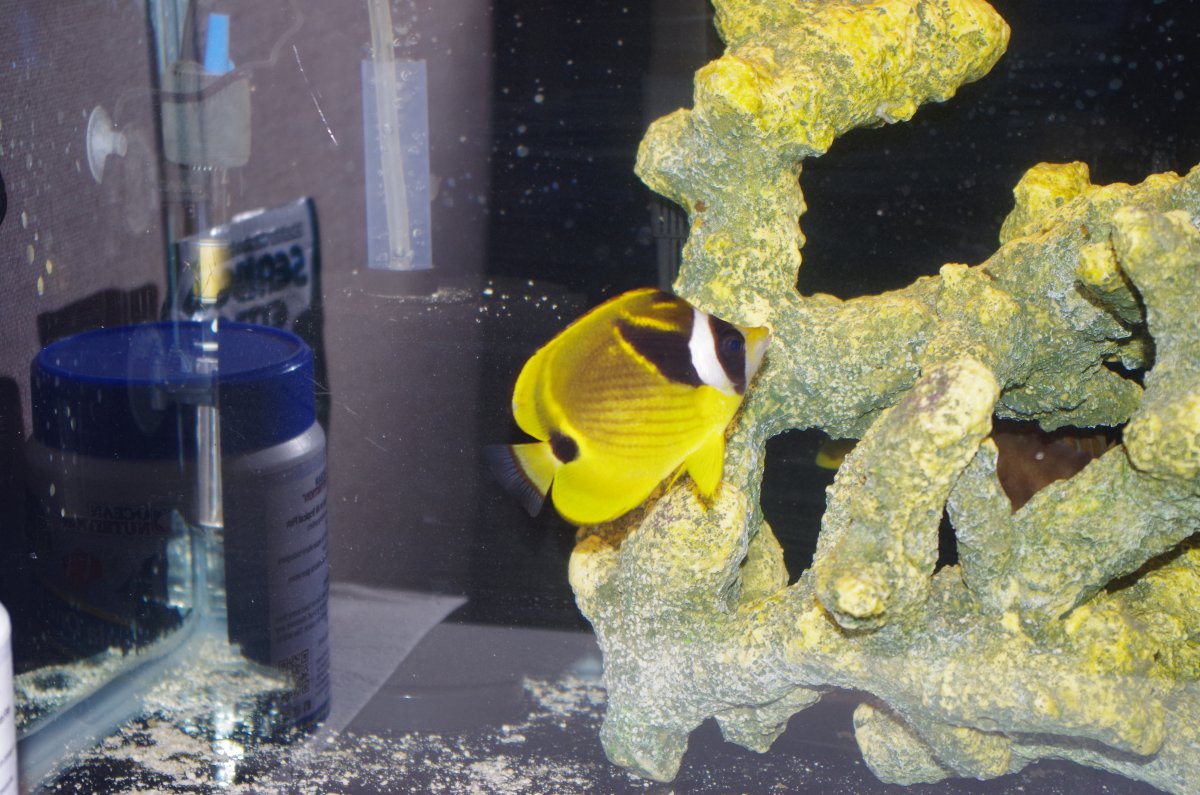 One foxy peeked out to see what I was doing, and I'm pretty sure there are cryptocaryon cysts on its front right fin... at least this is a QT and I can medicate if necessary, though I am inclined to wait it out a bit first (maybe that's just stupid?):

the spot on the fin looks large. could be lymph. try to find other spots just in case.
OP

Mibu said:
the spot on the fin looks large. could be lymph. try to find other spots just in case.
Click to expand...

I'm hoping it is just lymphocystis. There is one larger spot in the middle of the fin and a row of spots along the main spine on the lower part of the fin.
Last edited: Dec 16, 2021

It looks distinctly like the new foxface just has Lymphocystis rather than Cryptocaryon.

One day after delivery on 2 new Fiji foxies, SWF re-stocks the tiny Fiji foxies (~1.5-2"), so I might have ordered 2 more to have the tiny ones I wanted originally so I can enjoy raising them.

I'm discovering how hard it is to photograph or video dark-colored fish that likes to hide while in a blacked aquarium: 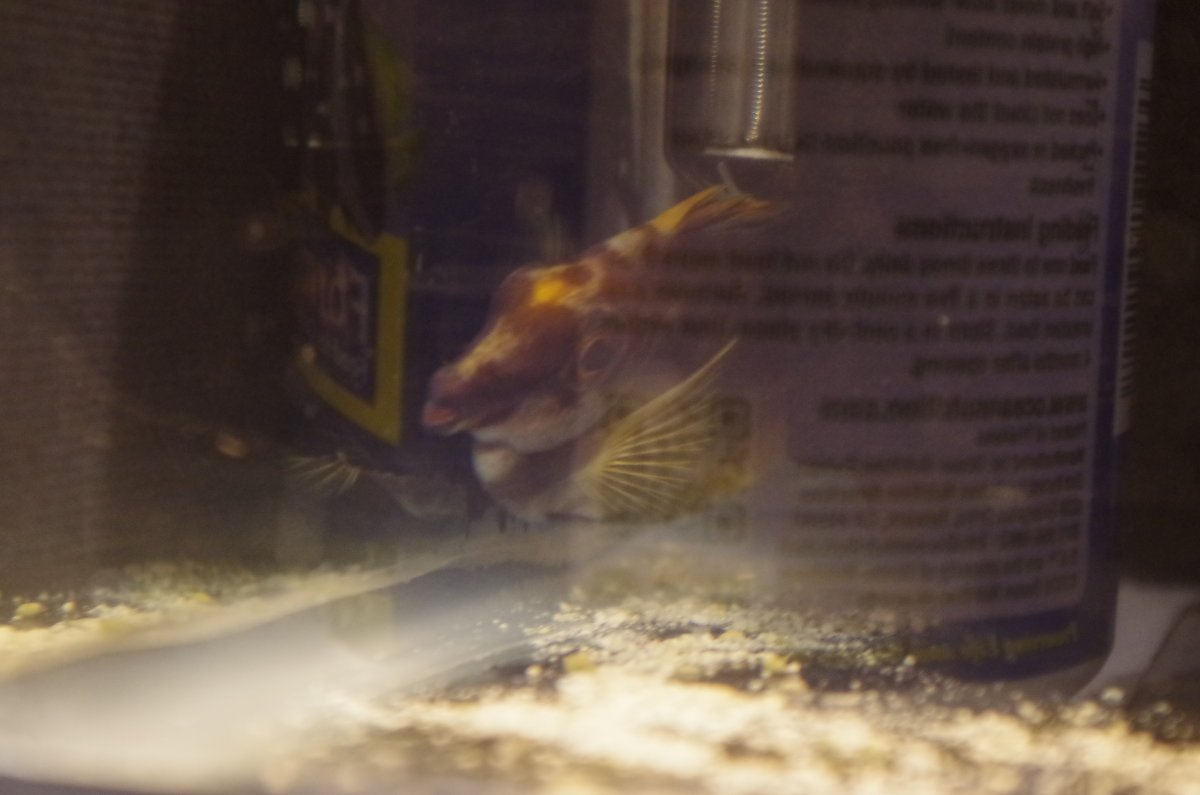 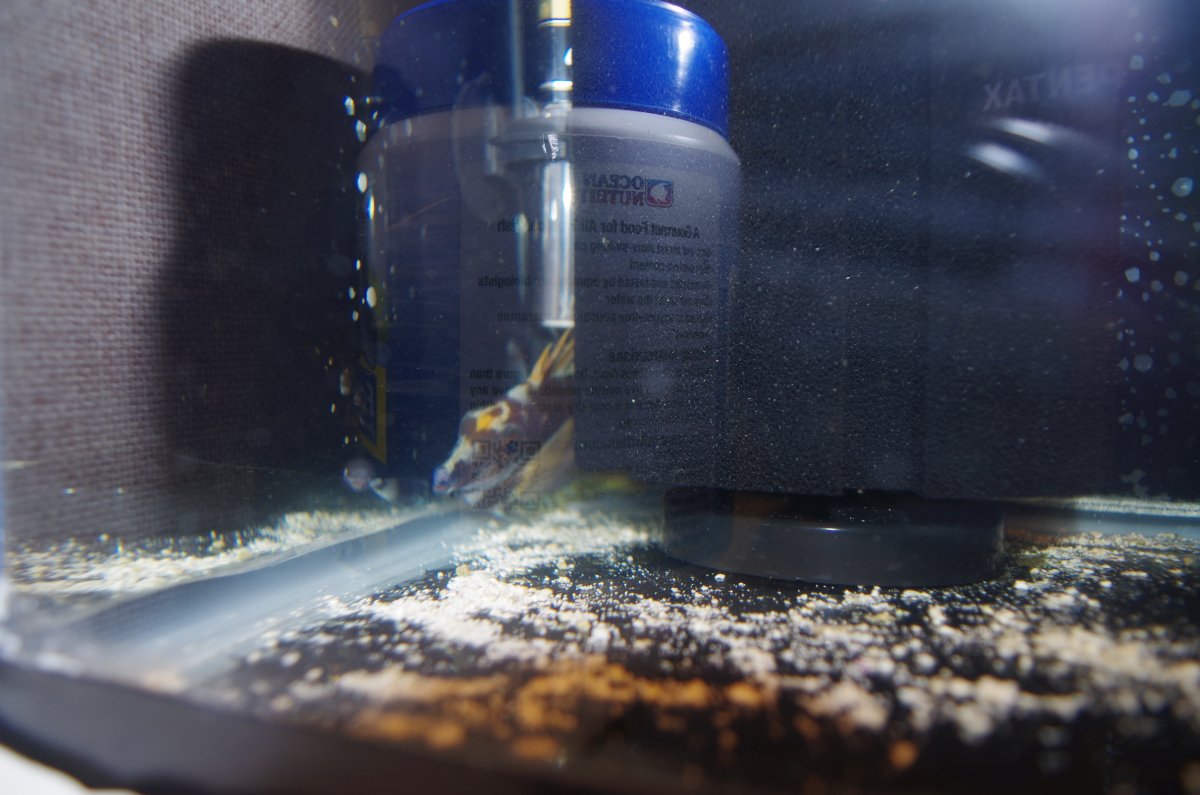 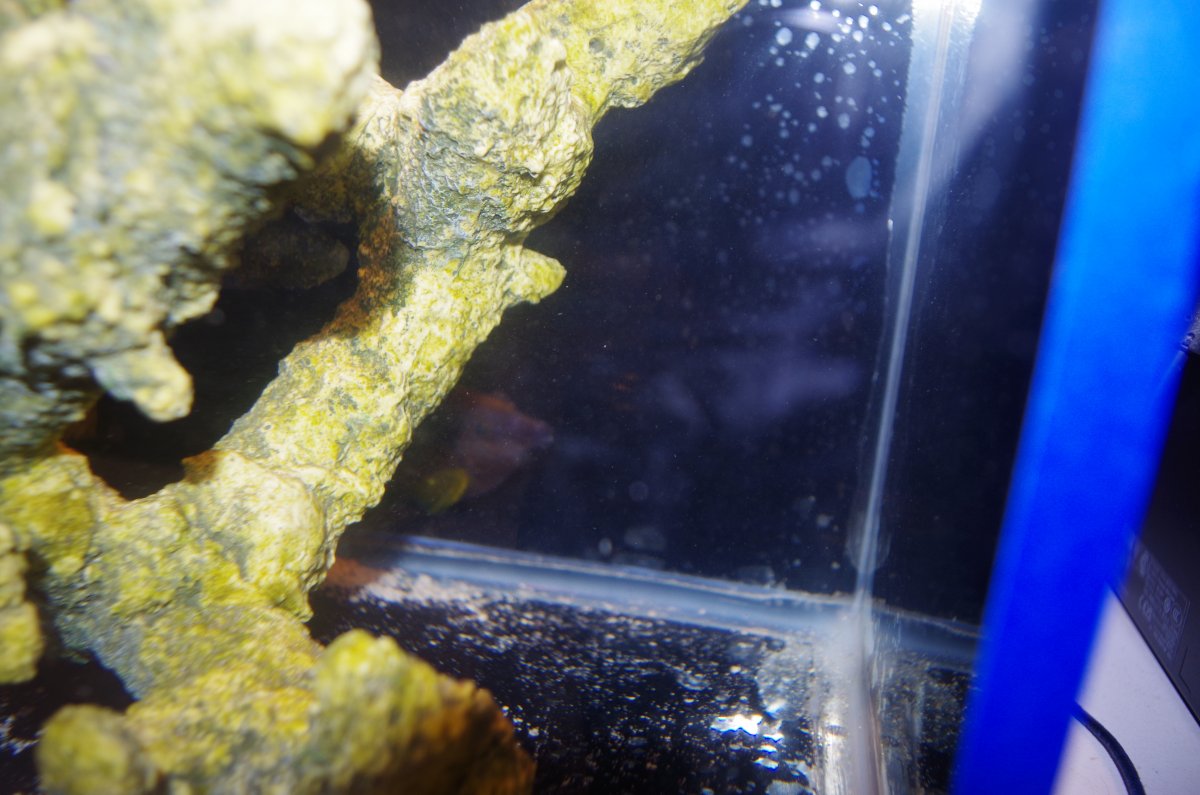 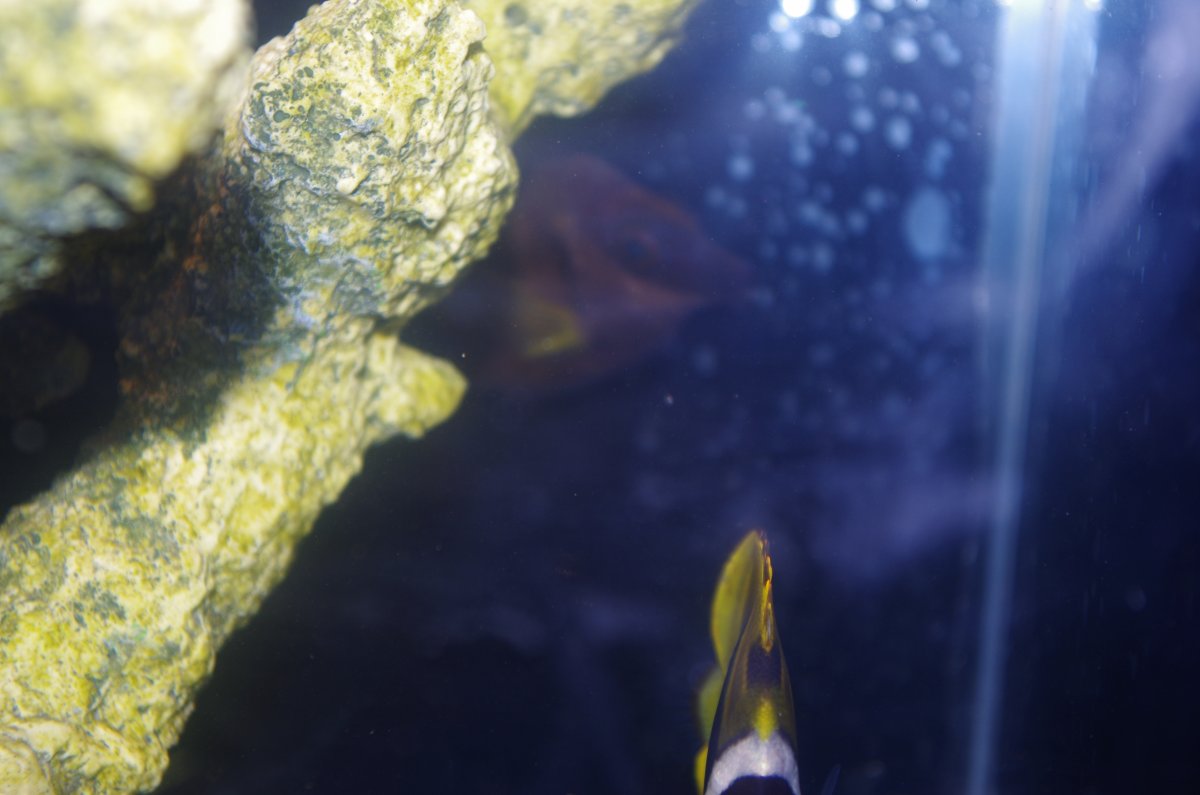 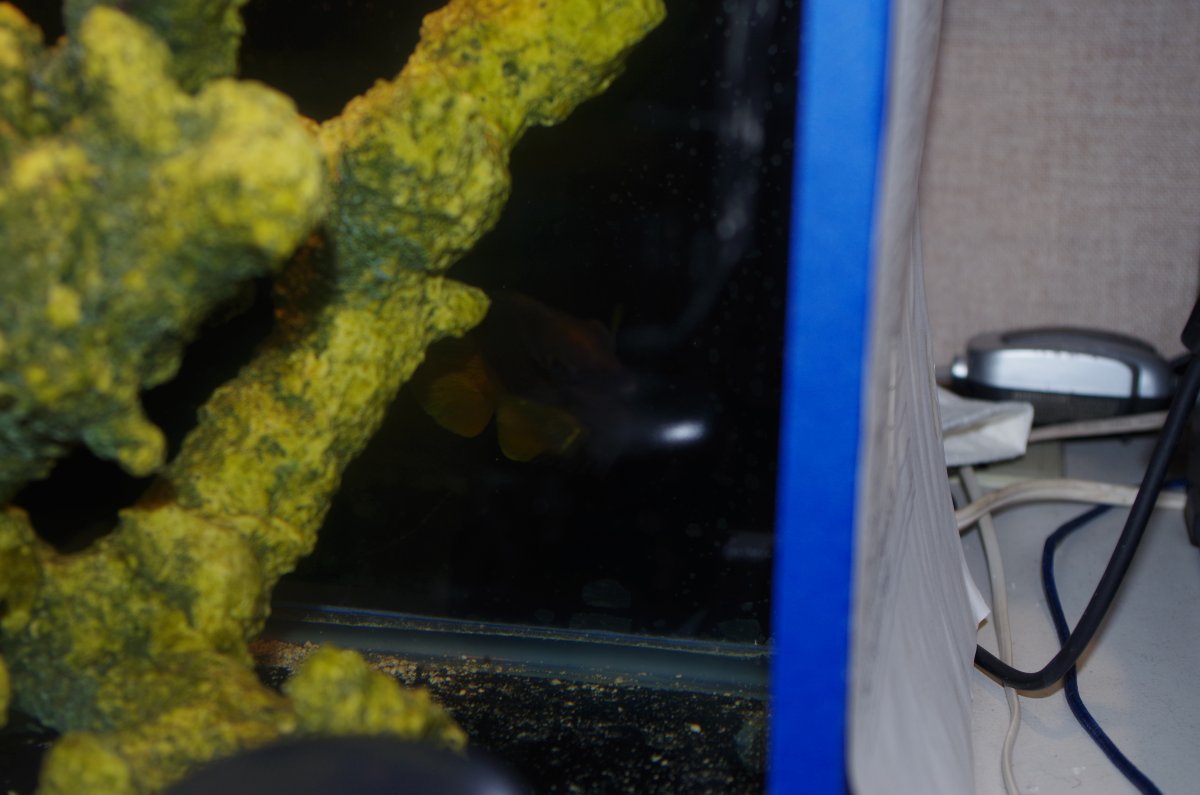 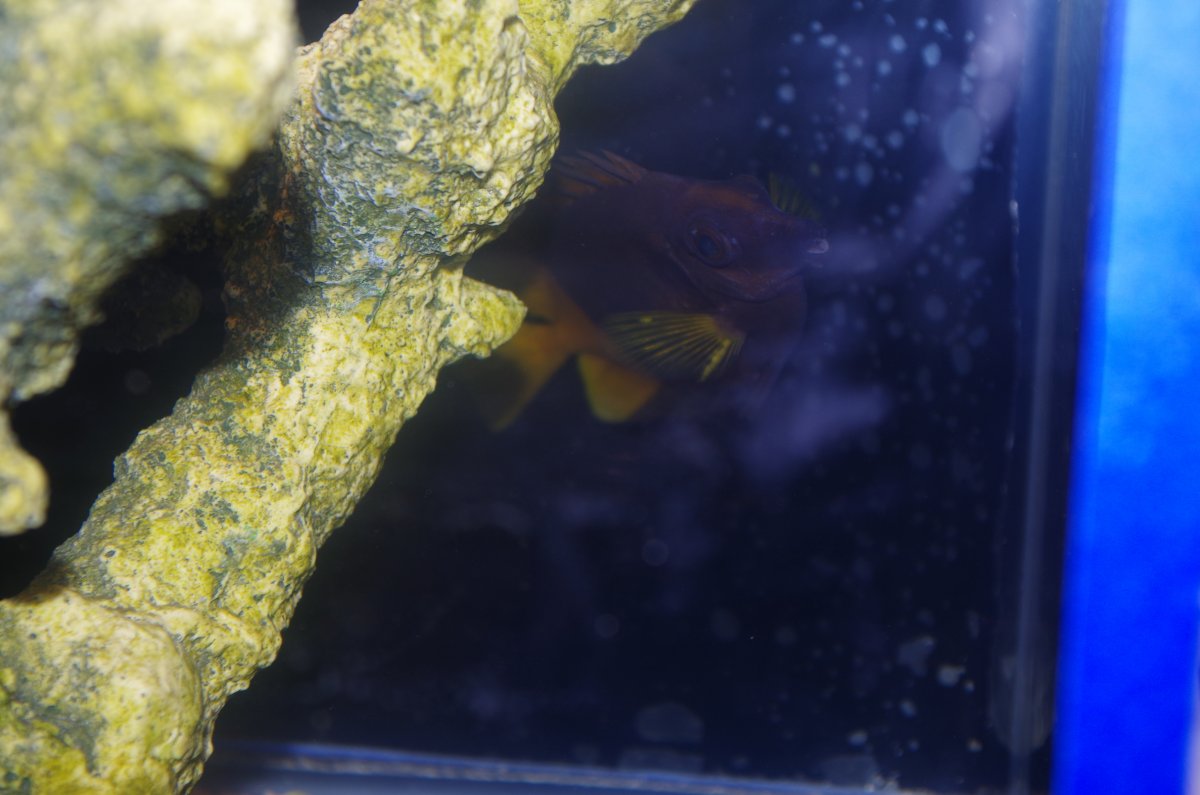 The fish in the home QT's are all doing great except a tiny Tomini tang that I got from LA about 1.5 weeks ago. It has a pinched belly and is pretty skinny. I started it out in a 5.5g QT, but transferred it to the 75g QT with the other fish where it promptly hid all the time and was probably not eating for a few days. It is now back in its own 5.5g QT for now to see if it will start eating and regain health.

Maybe when I am back to work early next year, I will be setting up my extra 30g breeder tank or 29g tall tank at work for a bigger/better QT. I'll want something nice for starting the tiny Fiji foxfaces so they do not get picked on by the bigger ones.

Lymph sometimes needs to be treated with meds, it really isn't contagious. But, can spread on the fish's body. I treated my copperband with feeding her metroplex laced foods, it wasn't going away after a month. Only took a few days and it was gone. Just something to think about if it is protestant.
OP

Mibu said:
Lymph sometimes needs to be treated with meds, it really isn't contagious. But, can spread on the fish's body. I treated my copperband with feeding her metroplex laced foods, it wasn't going away after a month. Only took a few days and it was gone. Just something to think about if it is protestant.
Click to expand...

Thanks for the advice, @Mibu !
After only quick research, I had figured there was nothing for me to do for this other than regular maintenance/feeding, but I'll keep this in mind if it persists.

Soren said:
Thanks for the advice, @Mibu !
After only quick research, I had figured there was nothing for me to do for this other than regular maintenance/feeding, but I'll keep this in mind if it persists.
Click to expand...

These are foxes, should be fine. It should clear up on its own with in a few weeks. If it gets larger and worse looking, I would look into meds for it. CBB never got worse, it just wasn't going away.
OP

Finally, some videos of the Work-QT with a bit of foxface showing:


Of course, they come out and swim about as soon as I put my camera away! I think they are already getting used to me sitting at my desk but get shy if I turn toward the tank!

Fish in QT's are all doing well except tiny 1.5" Tomini tang that did not make it...
Foxface with Lymphocystis seems to be doing a bit better although the Work 10g QT now has a slight cloudiness from a bacterial bloom.
I'm preparing for a shipment tomorrow of 2 tiny Fiji foxfaces (Siganus uspi) at 1.5-2.25" as well as another Auriga butterflyfish (Chaetodon auriga) <2.25" to replace the one I lost in my QT (I also now have both a Mertensii and raccoon butterflyfish, so I'll have 3 butterflyfish total which will probably mean I'm again keeping a second setup in my basement since I can't have all 3 in the macroalgae portion of the 125-125 sump, besides the fact that I'll need the second setup for pairing attempts with the Fiji foxfaces once I have 6 in total...).
For now, I'll have the 75g QT with a 75g sump for two larger QT's, will have [email protected] QT's, and will still have [email protected] QT's as needed in addition to the work 10g QT that will be emptied of fish while I am home tomorrow afternoon through January 2 for paid time-off/holidays. I will also probably set up my 30g breeder and 29g tall tanks for QT's (1 at home, 1 at work?) for extra space for larger fish. The foxfaces and raccoon butterflyfish look cramped in the Work 10g QT, though not nearly as bad as I originally thought they would be...

Build updates may be coming in early January if I can make good use of my time off.

I don't have a camera with me at work right now, so no pictures/videos to share today...

Sorry for the loss of the tomini
That's a lot of work on QT's. I would be over whelmed. Good work!
OP

Mibu said:
Sorry for the loss of the tomini
That's a lot of work on QT's. I would be over whelmed. Good work!
Click to expand...

If this was not my main passion right now with not much else to look after until puppies around December 29, I'd probably be overwhelmed, too!
Also, to say that I am managing that many is false, as I am only really up-keeping the 75-75 setup and the Work QT right now with the 5.5g tanks all running but empty of fish and one 40g breeder awaiting draining and cleaning after wipe-out (it has just been sitting for a month) and one 40g breeder just running with some newer sand and the live rocks from my 75g FOWLR after tear-down. I need a few more options for closer observation and separating fish, so I will need the 40g breeders ready as well as wanting to up-size the Work QT for receiving orders to avoid issues due to water quality in such a small 10g volume. The cloudiness is a certain indicator that bacteria could quickly become a problem when QT'ing any larger fish at work, even short-term!

Side note: the foxies are quite active today in the Work QT since I forgot to grab my camera!

No aggression or issues, just swimming around a bit and flicking up their spines every once in a while with an occasional chase of the raccoon who seems to hold its own without trouble.

once the foxies settle down, that flicker does too. I think it's fun to watch. But those spines sure are scary.