I have gone back and forth about making a build thread. I have never had a fish tank before and I am sure I will have some rocky moments, but I figure this may help others embarking on their first fish tank ever and going big at the same time. This is also a tank that doesn't include a sump...so I hope I can prove a beautiful tank can not include a sump and still look great. I already made the choice to put in some clown's without QT. One died and I did the 80.6+ F fallow, lesson learned. I also plan to risk it with a few safe, but still reef caution fish...it will be interesting to see how that goes. Eventually I plan to add corals, but I will put all the fish in first. This tank has been up for about 3-4 months at this point, but here goes:

- 2 O. Clowns (Snowflake and Caramel)
- Skunk Cleaner Shrimp
- One Spot Foxface (in QT doing well)
- Long Spine Urchin (I think, he was a hitchhiker)
- CUC including snails and some hermits
- A ton of clam hitchhikers.
- Two small gorgonian hitckhiker corals
- Three brain-like corals...I keep forgetting the name. Appreciate if anyone IDs them
- A lot of different kind of hitchhiker sponges.
- 75 pounds of premium live rock from 'Gulf Live Rock', if anyone is curious I can list all the good hitchhikers (and a few bad ones)
- 120 pounds of live sand
- 50ish pounds of dry rock that is starting to grow life

I have gone back and forth on what I will stock. My next planned fish was going to be a longnose butterfly...but I already have the yellow from the foxface...a red tail trigger sounds oh so tempting instead. I also wanted a yellow tang, but now I am tempted by the purple of a purple tang. Here it is for now:

- Longnose Butterfly
- Flame Angel
- Purple Tang
- Mandarin Goby
- Probably some more rock on the left side to create bigger arches when the fish are full size.

Seems I still have some minor diatoms sticking around the tank, but really hasn't gotten better/worse for the last few weeks. I haven't tried to go tackling it due to that. There also is a bit of hair algae...but hardly concerning and not really multiplying at the moment.

Here is to hoping positive gains ahead and the 'other half' not questioning the reef supply purchases too much. 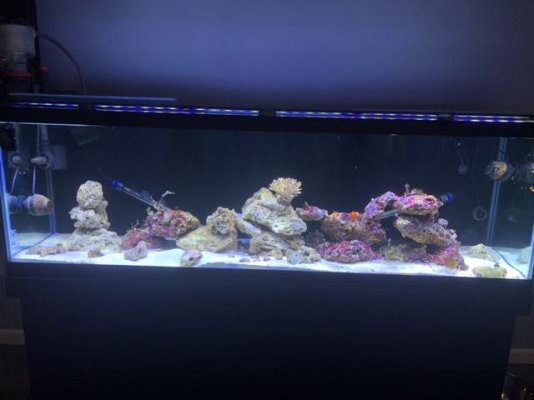 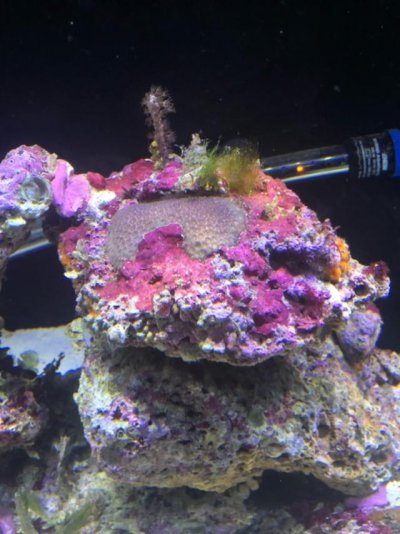 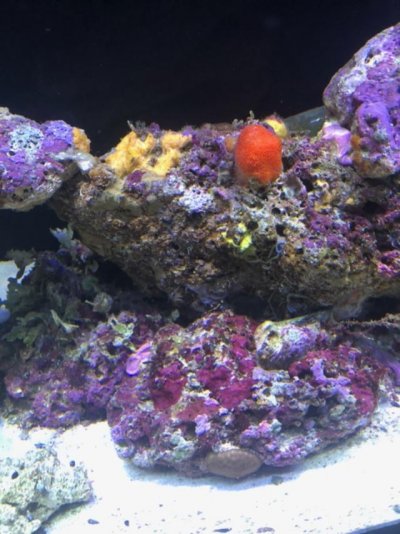 Kudos on the new tank!

A 6' 125g was my first tank as well many years ago. That live rock looks great and I started with something similar also. I think you are on the path to success. I have ran more tanks without sumps than with sumps so don't worry about that.

Very nice. How are the current USA lights working? I was thinking of buying them.
OP
M

Adrift said:
Very nice. How are the current USA lights working? I was thinking of buying them.
Click to expand...

So far it has worked really well. I really enjoy the fact it completely reaches across a 6 foot tank and the Bluetooth controls/settings are great for the price. I was looking for something that I could customize the light spectrum for and that would do an automatic lighting schedule for me.

The only complaint I have seen about them is I guess they aren’t overly powerful getting useful light to corals at the bottom of a bigger tank. Obviously I don’t currently have a bunch of coral to test that, though my Gorgonian at the top of the tank looks no happier than the one near the sand bed. It may help that I decided to use the included bracket that puts the light right by the rim of the tank. It might be a different story if I used the bracket that has it six inches above the tank.

Foxface left QT for the DT. He is the first algae eater in so he is currently living the dream with all the macro on the live rock. Not sure what specifically he is eating in this picture, but it looks tasty.

Next up will be a blue throat trigger and flame angel. Dr. Reef had good prices on these QT’ed so I will wait and see how long it takes to get those.