I started collecting equipment for this build about two months ago. I had a vision in my mind of what I wanted it to look like and I've been slowly piecing it together. There is nothing flashy about it, but it's coming together bit by bit. I would love some feedback on some components of the build, as I'm really not sure if they offer any benefits to the system.

I liked this tank because of the height it has compared to biocube or Evo and I was pretty set on not doing an aio setup anyways.

I set it up in a corner of my apartment with only two panes of glass being display, with the other two being covered with rock and hiding equipment. I may build a rock wall at some point, but angle grinder, pond foam, egg crate... It's a lot of work.

Although these tanks do not have tempered glass, I decided not to drill and instead going with canister filter and hob equipment. The canister (Fluval 206) is tucked away in the cabinet below, but the other equipment is where I get stuck. I acquired some of the equipment at a steal and had some from my last build. Let me know whether you think I should use it, ditch it, or trade it in.

Reef Octopus Classic 1000 - It's way to big for this build. It's rated for 65-110gal and although it fits, it takes up to much space on the back. I'm thinking of selling, or trading for a Tunze 9004 or something similar. I don't love the idea of an in-tank skimmer, but space is limited.

Coralife Turbo Twist 3x - There are a couple ways I could mount this, but I'm not sure if the benefits are worth the space. I'm pretty sure a 9w UV bulb isn't powerful enough to kill ich or parasites. I think there are more effective ways at preventing algae blooms, dinos and diatoms.

Fluval Large Breeder Box - Thinking of using this as a mini refugium, but it takes up one whole side of the tank. The benefits from mineral mud and chaeto would probably be very minimal, but it would offer a safe haven for pods and I think it looks good. Lol. Thoughts?

Reactor/Phosban/GFO? - I don't have one, but thinking this would be the biggest value for space. I'm curious if I could hook up a sicce to run a loop between the UV sterilizer, the reactor and the fuge?

Is this all too much for this small of a tank? I mean, should I ditch all the equipment in the spirit of a minimalist style tank. Is it realistic to manage water parameters without it?

Thanks for taking the time to read through this. 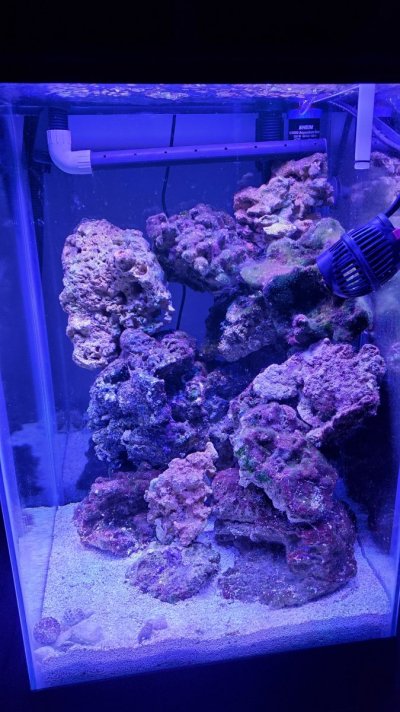 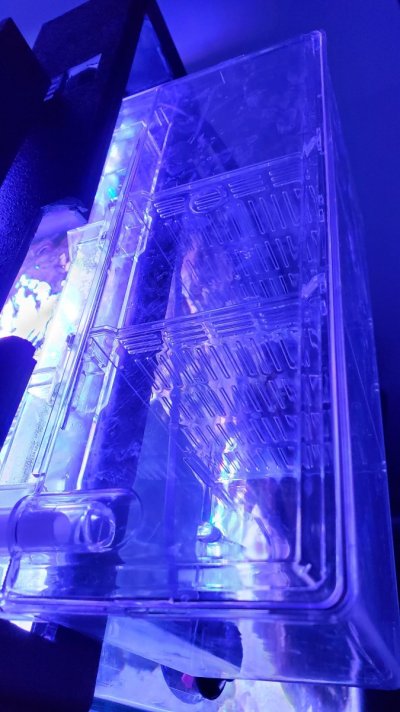 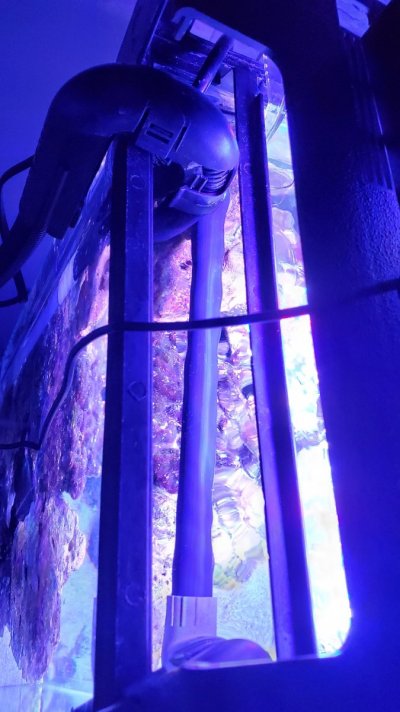 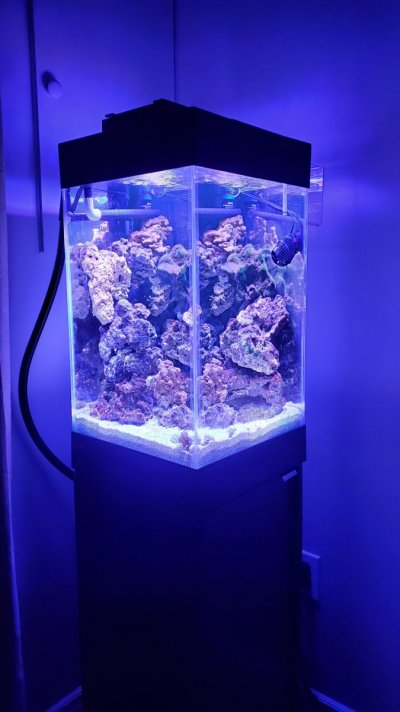 It looks good so far, you have to just do what you need to do to try and keep the water parameters in check and stable especially if your adding corals.

You could use the equipment you already have and then change things around if and when you need to.

The Supreme Guide To Setting Up A Saltwater Reef Aquarium

The Supreme Guide To Setting Up A Saltwater Reef Aquarium This article was sponsored by @MarineDepot at www.marinedepot.com. Introduction The marine environment is one of the most complex systems on the planet. The aquarium you are about to set up is only a tiny sliver of the vast ocean...

Not much of an update, but I'm coming into month three...

I added some cuc now that the tank is pretty well cycled.

I seeded with some Figi liverock that my uncle was keeping for me from the build that I shut down in 2016. The rock spiked my nitrates and moved things along really quickly. Considering all the livestock that he keeps, I was surprised to find some feather dusters, spaghetti worms, and even some Zoas that had shrunk up to nothing. A few of the feather dusters have been picked apart, but still hanging in.

I added some blue legs, an emerald, and tigger pods last week.

Still haven't run any tests, but the hair algae is starting to die off so nitrates and phosphates must be coming down.

I picked up a Sicce Micra Plus to run a loop from the Turbo Twist to the mini fuge, but have to work out the plumbing... The UV looks like 5/8 barb and the mini fuge is 3/8. Should I just use a reducer for this? I'd also like to be able to adjust the flow of the sicce, but not sure the best approach. Two-way valve? Shut-off valve? Any suggestions would be great.

Thanks for having a look. 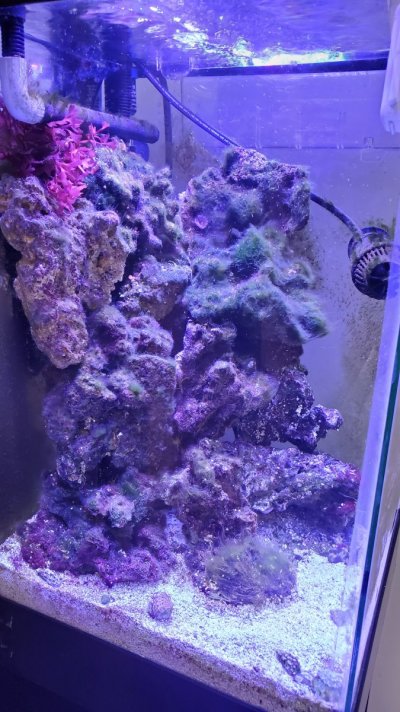 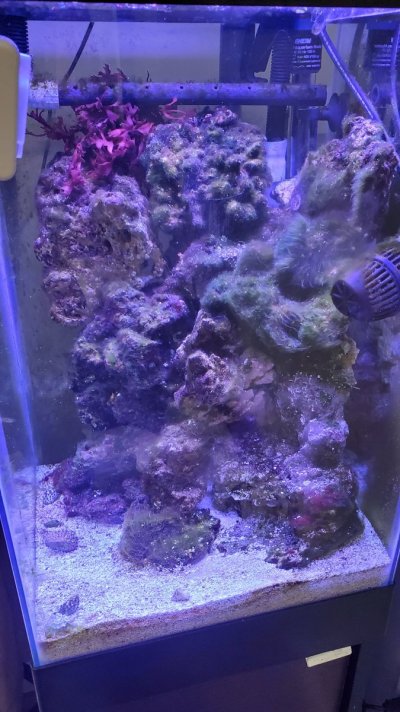 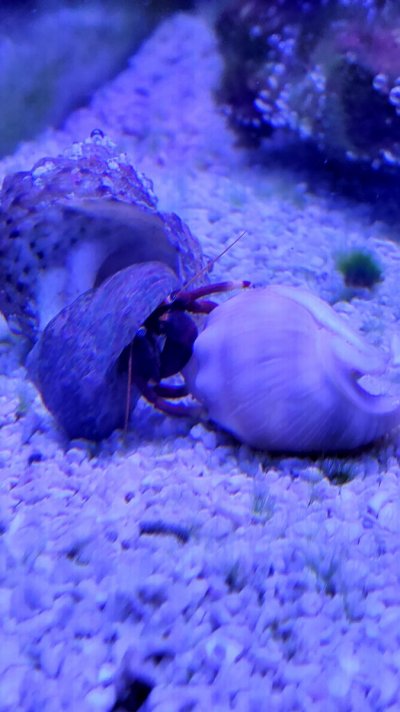 Latest P04 test was 0.47 on the Hanna Instruments HI 713 checker. Still working my way through the ugly stage and this is actually an improvement from previous week's test results. Added a small amount of GFO to my canister filter which has really helped.

S
Nano Build Nano bowl as coral quarantine for my 720