I tried to start a build thread with this as I was working through some things I got caught up in the mix. I wanted to share my build with the community here and also hopefully get some feedback and new ideas as we go.

A little background on this tank:

I purchased for $50 on FB marketplace. Not 100% sure but if I had to guess this tank is 10+ years old. I know, I was asking for a nightmare to happen but the price for a tank that measure 60X24X27 and holds roughly 165 gallons I couldn't pass it up! This thing was stripped and re-sealed twice. (I messed it up the first time and it still leaked) Lets just say the second time around I was very generous. Long term the tank will be swapped out for something a little more "Modern" but for now its my little project and after 3 years still no water issues (Fingers crossed!).

Here is the tank on the day I brought it home. I didn't get any better pictures but the silicone work on it was crazy! You can see my best friend Otto is thrilled as well! 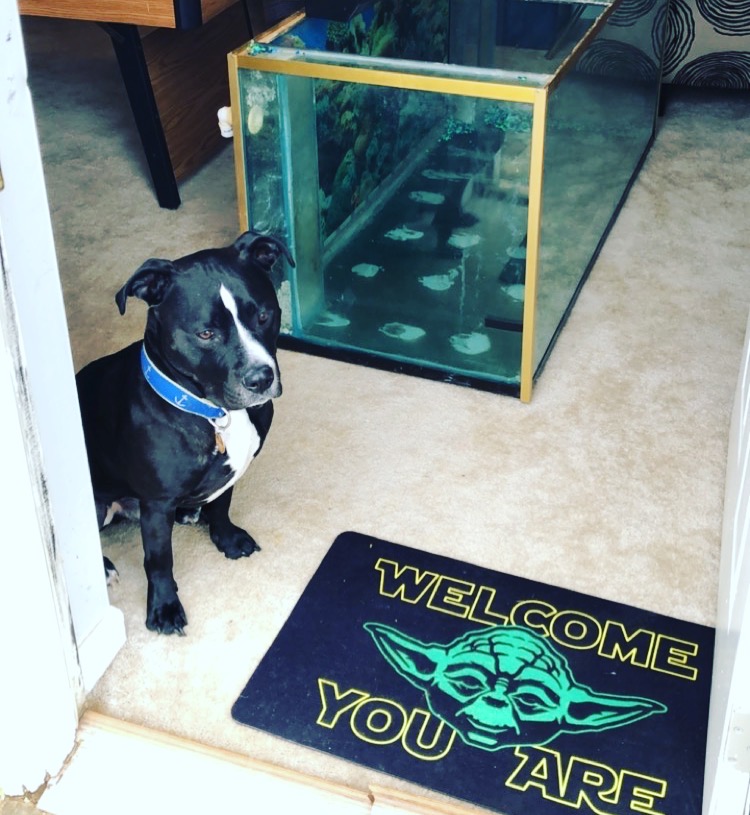 Didn't take long. I got the blessing from the Mrs. and started chopping away. Keep in mind these photos are BEFORE lessons were learned. Viewers beware: You may experience nightmares from some of my original filtration, equipment, building and maintenance techniques! 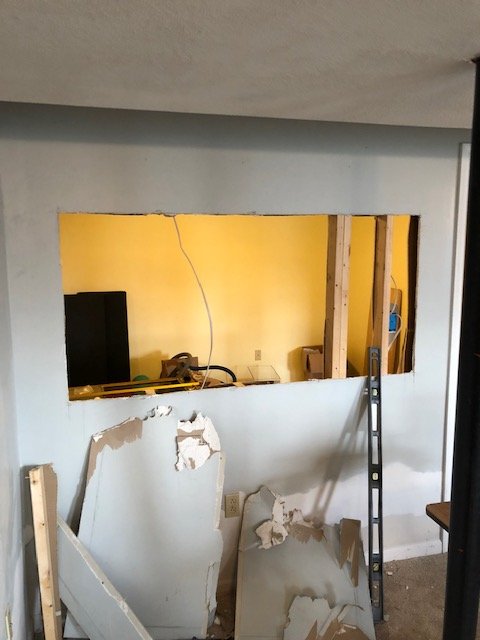 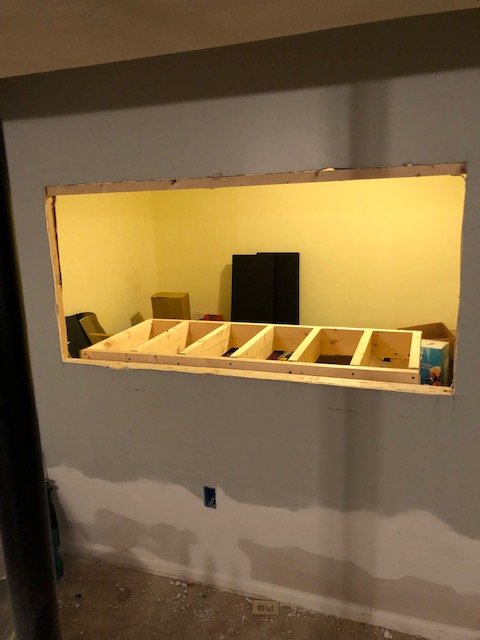 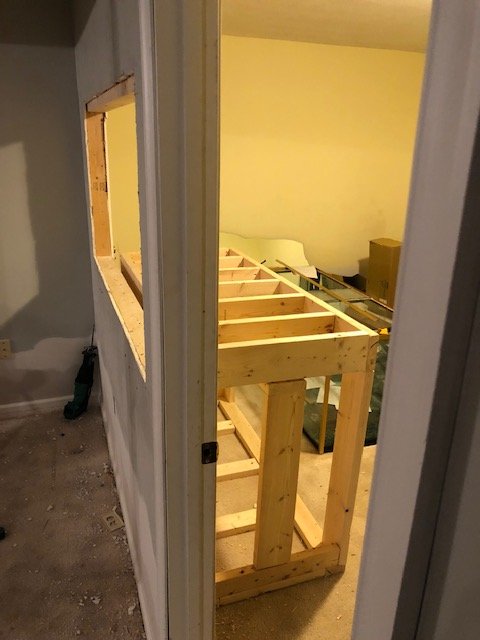 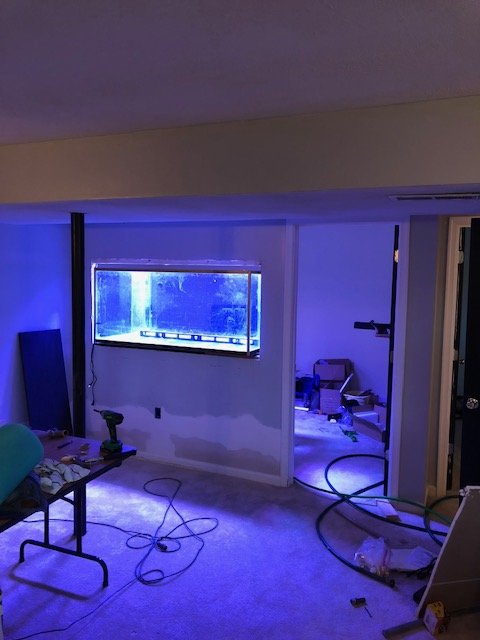 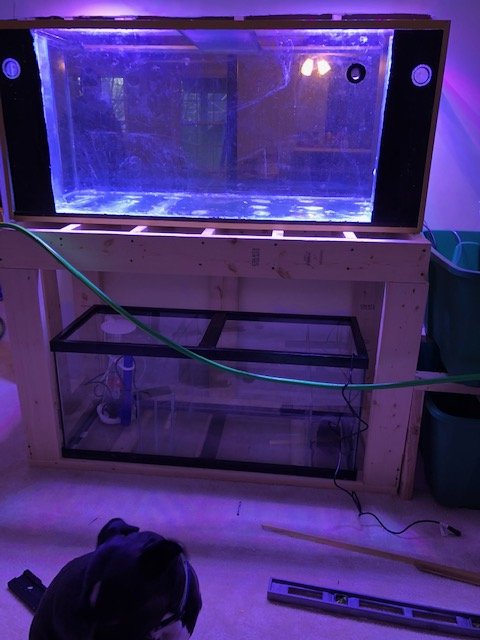 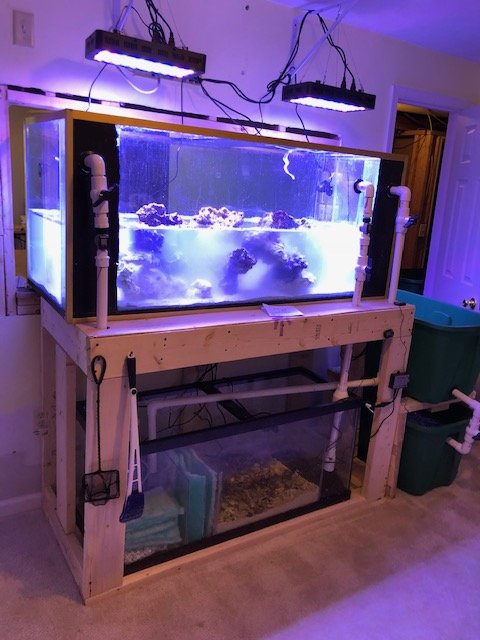 After original install 3 years ago I got started in reefing with this vision to have one of these beautiful tanks. You know, huge colorful SPS colonies, beautiful happy livestock, and no nuisances at all! Ill be honest, I had no idea what I was getting myself into. I drew up what I had in mind and just went after it. I caught myself chasing problems rather than preventing them, didn't test enough, didn't research enough, and relied on trial and error entirely too much. I will say looking back I was learning a lot. Things like - don't get a damsel IMO, chaeto is always the best idea, lighting isnt always the place to cut corners, nothing happens quickly in a reef tank that is good, etc. etc..As I went but could never really figure out the nutrient balance in my system. Had a handful of fish, corals, inverts. Nothing crazy, mostly softies, clowns, tangs, wrasse's, gha, cyano, diatoms, bleaching, aiptasia, ick....you know "beginner" stuff. Didn't matter what it was, if it was bad for your tank, I figured out a way to get it into mine...Lets just say I created my fair share of challenges for myself the first time around. IMO it was because I wasn't versed enough in reefing and didn't truly give it the time and research it needed. Knowing what I know now, I would have been less hard headed and used this build thread as a resource and get opinions and feedback as I went from the beginning and not 3 years later 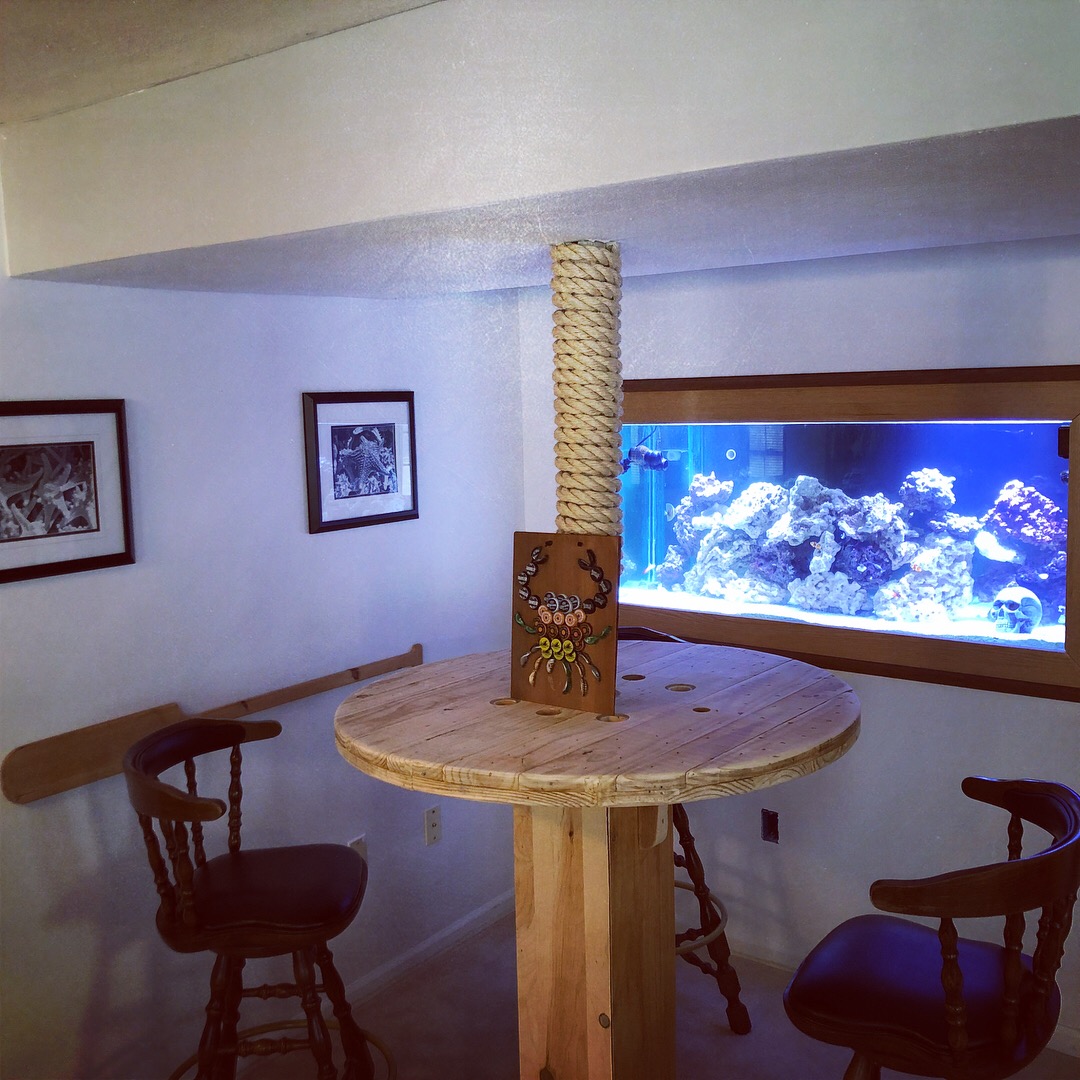 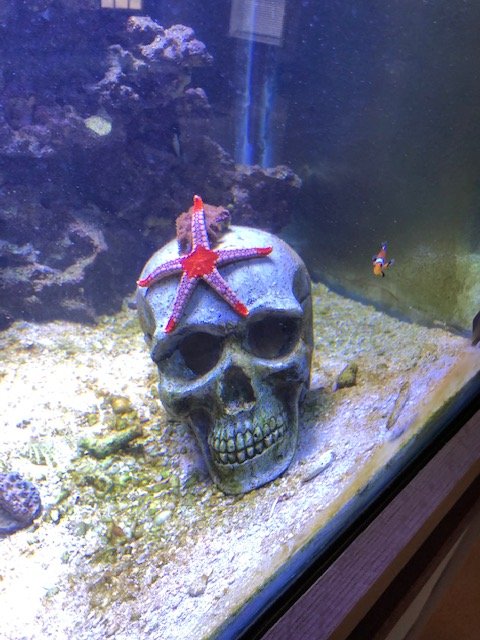 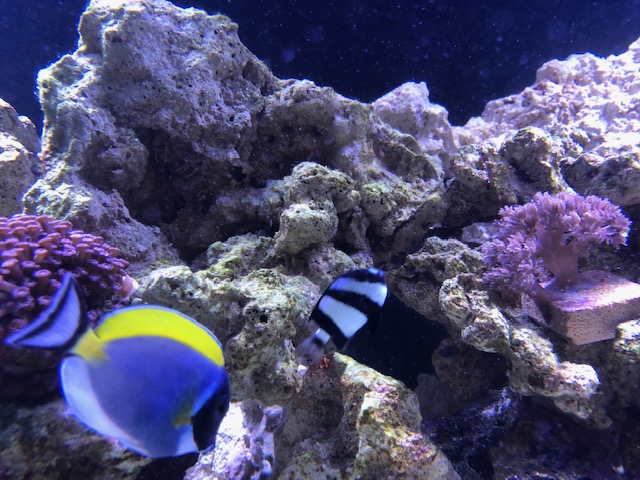 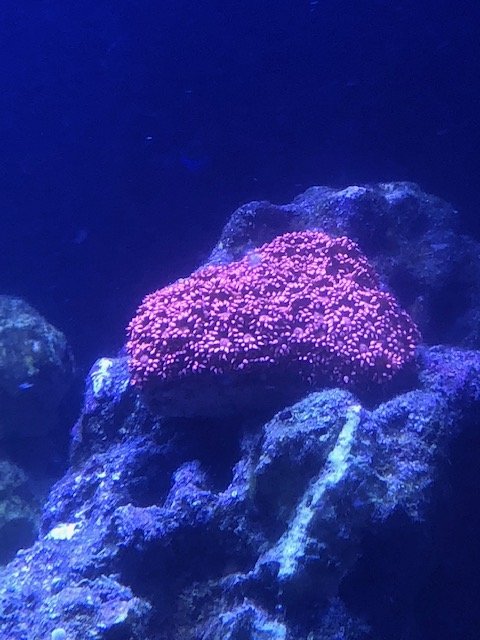 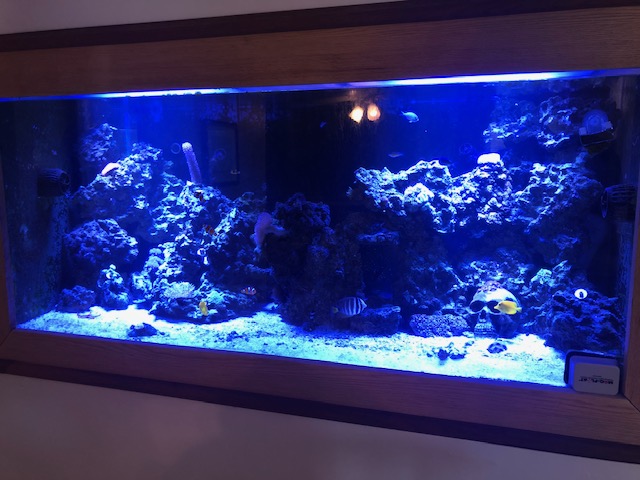 Unfortunately about 6 months into having the tank we had a power outage in the winter that we couldn't come back from. I lost almost everything and honestly was ready to give up. I wouldn't say it was a total failure because there were a lot of lessons learned in this trial and error project the first time around. Back to the drawing board. I played around with rebooting it as freshwater but FW just didn't motivate me to give it the same attention. 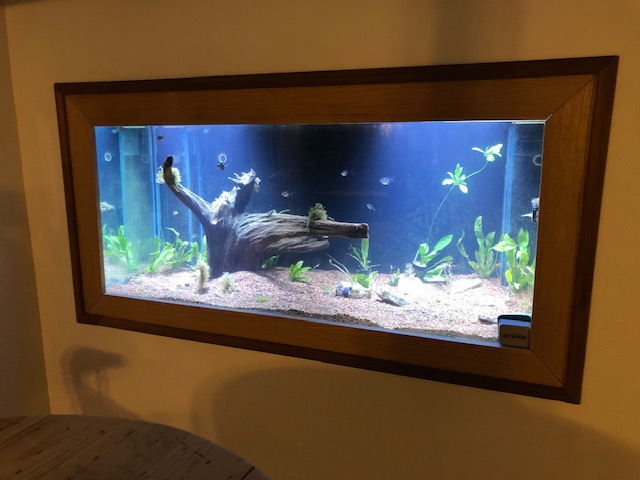 So I gave all of my FW supplies to a fellow hobbyist, cleaned the tank and started researching and learning more about reefing so I could do it "right" this time...Whatever that means! I let the tank sit for over a year and it took working from home during quarantine to finally decide to start the reboot!

The sump of the old tank was a 90 gal display that I cleaned up and used to hold the livestock that survived the power outage. After about a year of strictly maintenance and ZERO unnecessary purchases, upgrades (other than an algae scrubber ), livestock additions etc. 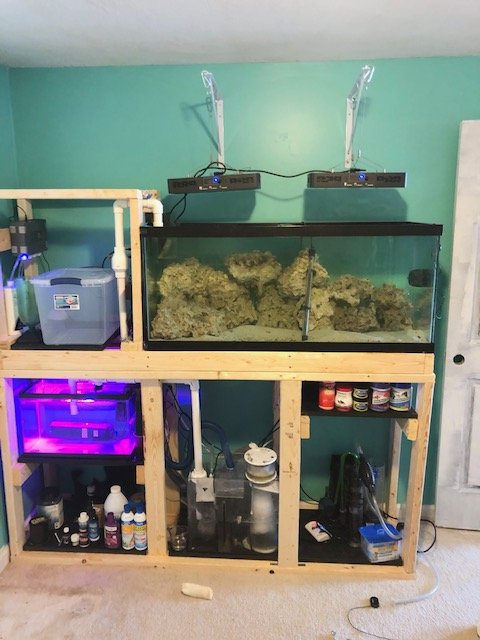 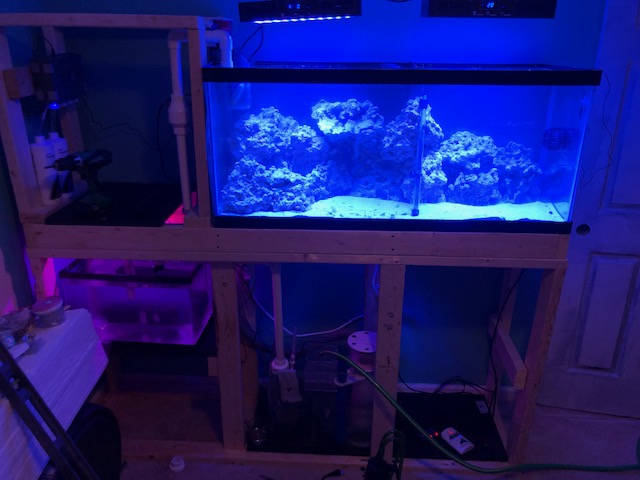 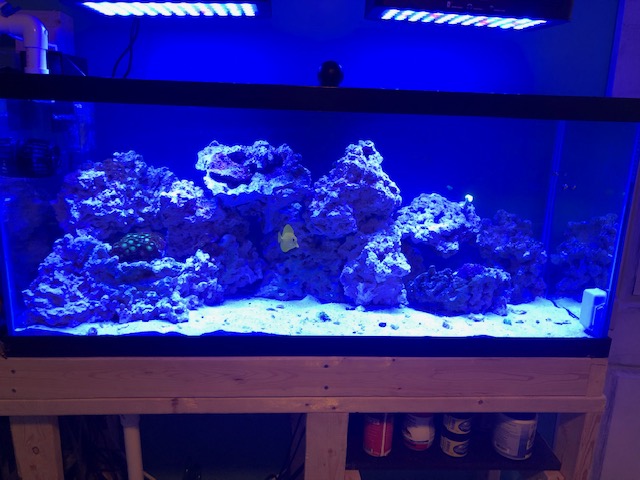 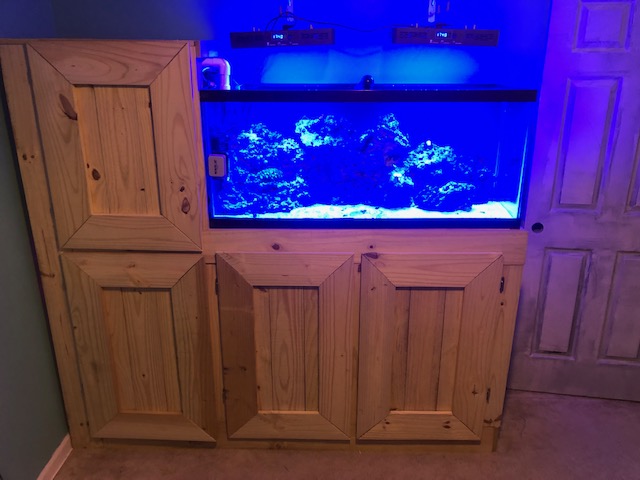 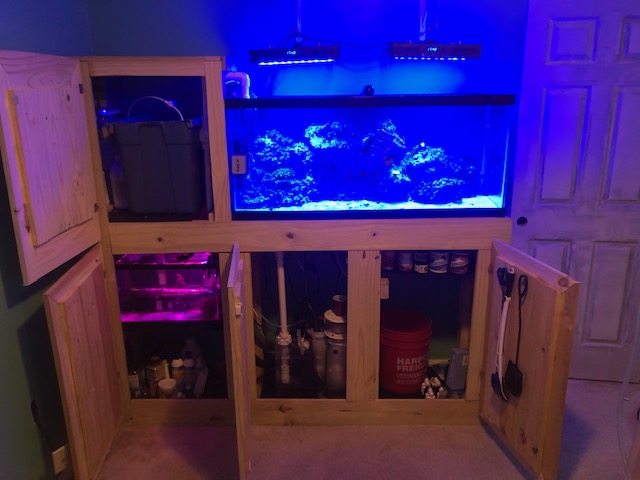 I finally got the patience required to try and work on nutrient balance on a larger scale. I started working on the wall display again.. 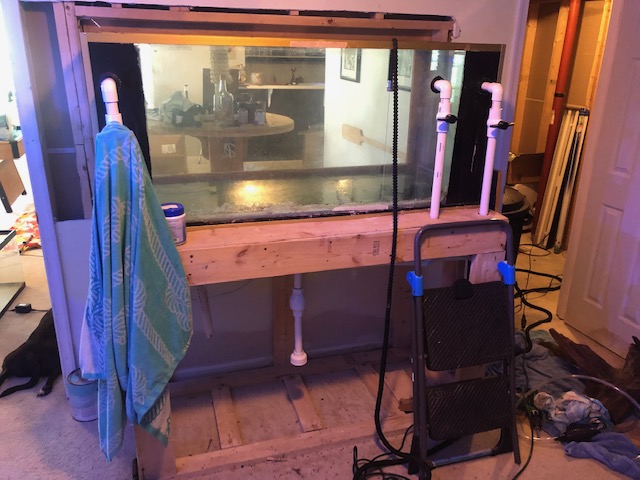 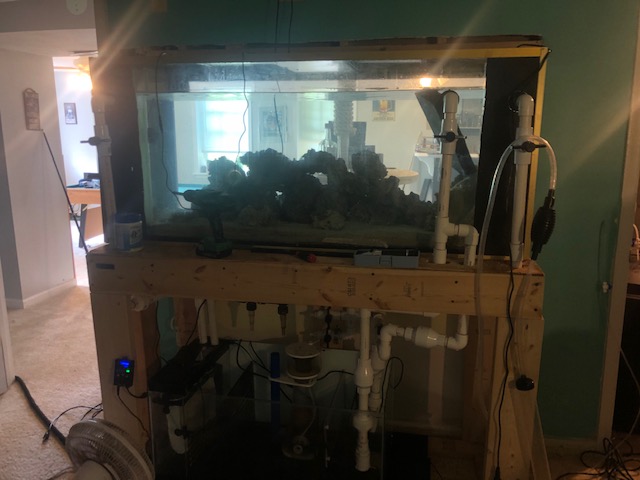 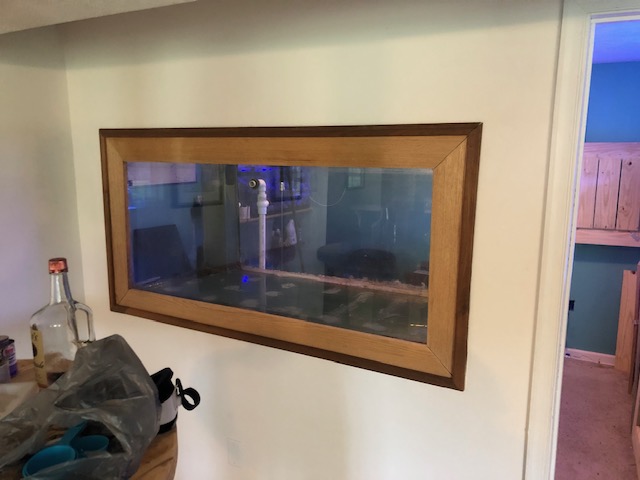 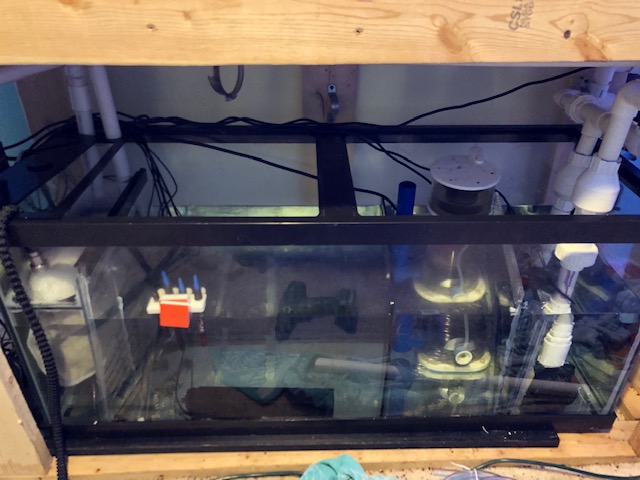 As I was building I realized I wanted a lager sump. I was going to keep the 90 as are display but from a maintenance perspective it was just taking time from me focusing on the main display. I decided to convert it back into a sump with a triton 40 G sump kit. The original plan was to us a 40 breeder for the sump but I wanted more space and to have more bio filtration (Live rock) in the sump so I converted the 90 back with the same sump kit. I had to shave some of the acrylic down but it worked out just the way I wanted! 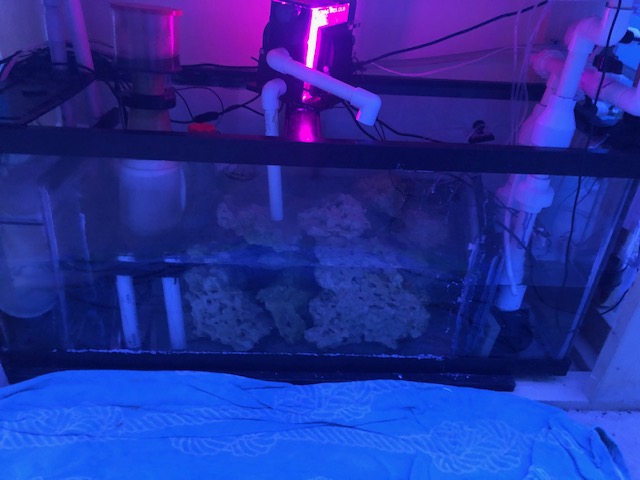 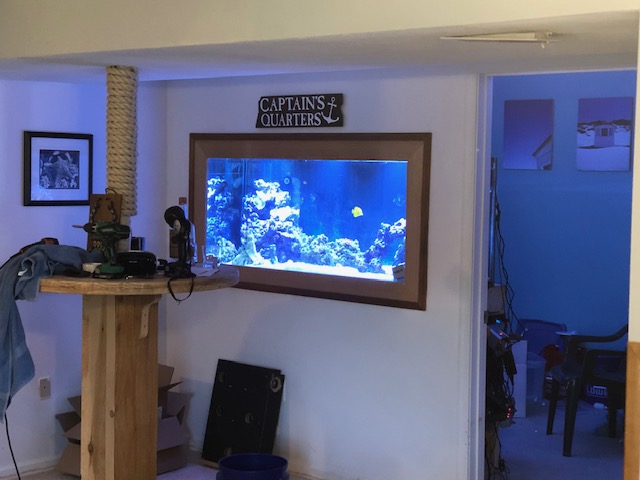 Here are some Photos of the tank over the last few months. A good bit of equipment changes/upgrades to cover during the reboot process including full apex, DIY T5/LED Hybrid project, ATO, Kalk stirrer (problems that I need help with ), and anything else you guys may want to hear about. The tank has come a long way just in the last few months. More updates to come over the next week or so!

Oh and if anyone is wondering how Otto is doing... He's here having breakfast with me on the deck! 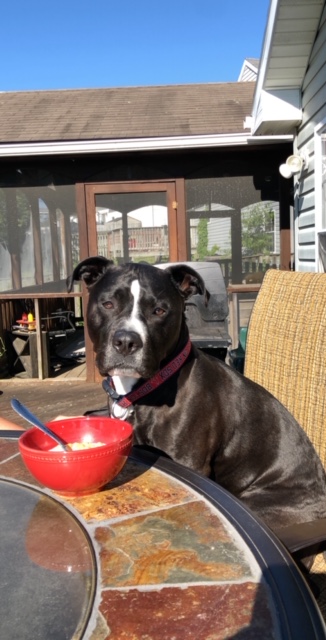 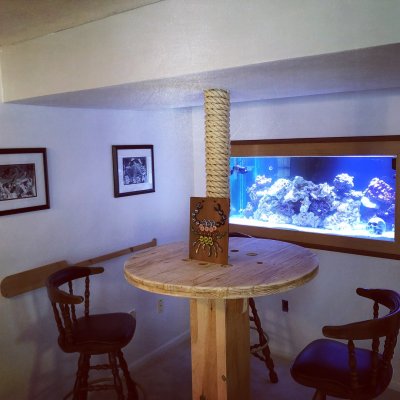 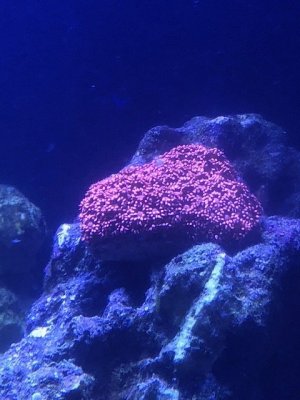 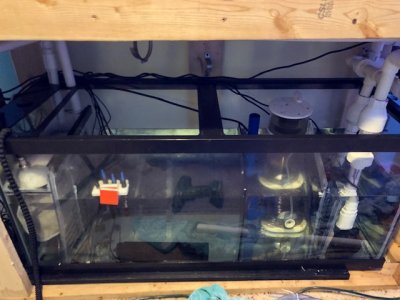 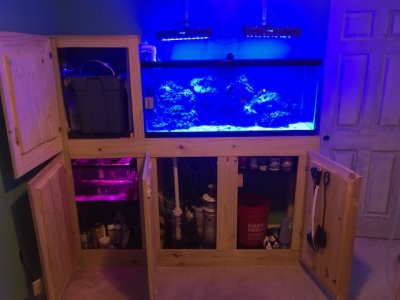 Pictures posted out of order