About me:
Happy to finally put together a build thread - I have been in the hobby since I was 5 and salt water since I was 7 29g "Reef" aka an anemone and some inverts - keep in mind this was 1995... Worked at fish stores since I was ~11 and on the books at 14. So yea I was a bit of a nerd for this stuff (I'm a gear head) and had 180g reef just before college but timed that about the same time so priorities changed. Joined Reefcentral in 2006 and R2R not overly long ago since college made it difficult for salt water, but I had a python and some nice freshwater aggressive planted tanks. Also fun for those with lower maintenance requirements. I do miss plecos... For Salt tanks I have had - 29g Salt, 33g Reef, 180g FOWLR, 75g Reef, 70g Reef. Fresh I have had 75g Aggressive Stingray, 65 planted Aggressive and shrimp, both moved around with me in college.

This Build:
This is a 240g reef - I wanted this to take care of itself. I travel for 1-3months at a time so I didnt want to worry about the tank or teaching someone how to tale care of it. I dont tend to buy anything new because its too expensive and most of the time its the same thing as the older models. Ive been in the industry long enough to know whats worthwhile.
I love pictures and dont like having to search threads for pics so I put them all here - though some are below
Google Pics

Gear: Keep it simple - Maybe...
Dimensions: 72x30x26H - Glass cages starfire used - I drilled it on the side for the FijiCube 2400GPH Overflow (maxed it out at ~1300 gph not happy about that...)
Sump: Trigger Platinum 39 - Few new items and that is only because of the integrated roller mat, Which is awesome! and was the main contributor to having this long duration maintenance work. at $1000...
Skimmer: I got a great deal on a Eshopps S300 and that has done well running - I also got a great deal on a Octopus 300 EXT DC pump - but i havent had time to hook it up and as much as I love gear - i think it might (sadly) be overkill until I get more fish/bioload
Lighting: Started with Orpheks Atlantik V4 (2 new 1 used) but I didnt like them for many reasons and went back to Radion G4 Pros (5x)
Refugium: Eshopps RS300 3rd gen - Pics might help how I rigged this - Has a refuge (flower phase red) light on it
Frag tank: working on it but it was a 10g sump that is soon to be a 10g tank
Reactors: 2gallon Kalk Reactor Eshopps I think? A Media reacto its 18" tall and runs carbon - I dont have much phosphates for GFO beyond what the Refugium can handle. An a Octopus Calcium reactor which I havent hooked up yet (Another great deal but havent needed it yet).
RODI: 6 stage with the Aquaticlife Smart Buddie Booster pump - this thing is great and highly recommend - running off a wifi plug timer
Controllers: I have an APEX Fusion - ATK - FMM - Feeders - 2 DOS - and 2 cameras
Supplements: I run Part C by TM, Aquaforest Build Vitality Amino and Energy, Ca and KH as needed beyond what the gallon of Kalk does a day. Fuel every day since its the only mix that has everything! and I dont refrigerate after opening (Shh), Phyto and Zooplankton. The basic stuff is on Jebao dosers and the Kalk, CA, KH, and Nitrates(not using currently) are on DOS.
Testing: Apex Trident and (Not working now but I have the Reefbot on there which I liked when it is working).
Pumps: I run everything off two return pumps eFlux LOOP DC Flow Return Pump 3170GPH - They are running about 1300GPH combined though - thanks to the overflow lacking and the Apex Flow monitors (not a fan but needed to prove to Fiji their poor design).
UV: Lifegard PRO-MAX - 3" High Output Amalgam - 55 Watts
Flow: Currently just 2 gyre 350 10s period on 100% - seems to be ok but Im sure Ill be adding something as the coral grows. (It cant be that easy

Some important notes:
1. I have yet to have a refugium and a guy at Reefbuilders 2012 once told me that they are excuses for people to have additional tanks. and that made sense since I usually see people treat them like little tanks. Over the years I have seen/read multiple tanks with them and noticed that copepods and similar life do seem to do better with them. The nutrient mamagment side I think is easier with GFO. I do like having the light cycle opposite of the tank for PH stabilization. However I think it does act a lot like a settlement chamber and its hard to clean. The perfect medium may be a plant/photo reactor.
2. Stand build - this is very important and much of us go overkill on this. that said I keep my stands TALL (42") for room and better viewing angles. also stops me from putting my hand in the tank though I bought tongs so I still can . I used some PVC panel from Lowes for the base and it is awesome. flexible and water resistant plus its a pretty white. One thing I did on this tank which I thought was particularly savvy was the use of a larger footprint stand base, and used L brackets to hold the panels. This provides a 4" ledge around teh entire tank with additional 8" of space in the stand (front to back) and that has made fitting things much easier as well as mounting space.
3. I run a 4x8 light cycle - 4 on and 8 off. this allows me to enjoy my fish in the morning and after I get home from work - also helps with temperature. Most importantly and why I started this is I read a book on growing coral and the author said a study was done on the photoactivity period of chloraphyll - it peaks at 1 hour and slowly dies off after that. then starts over again after 8 hours of night. so you get better growth with 2 cycles a day. I havent heard ANYONE else do this. but for the reasons above I do.
4. I buy most things used but also its great to buy peoples tanks who are breaking down - since I was starting up a again I needed a lot of the basic stuff and by buying a bunch of used tanks I was able to start up fast - DOWNSIDE is you will get any nuisance animals.
5. I dont quarantine - I have had bad luck with it. I did have a tough time with velvet on this tank - It took out about $600 in fish before I was able to get the UV on - I run a UV constantly now. I had Flatworms as did my friend who is meticulous about everything ( I think it came from teh Special Grade Sand but not sure so) I used flatwork exits about 6x 10 bottles. That can be seen in another thread. I dont have patience for quarantine. Just my experience. Larger tanks I could understand that it is better to do and I agree, but I dont - I dip in copper and paraguard, I dip in coral dips etc.
6. First time I built my own rock and that was fun - but needed more space for fish to hide so made some modifications - but overall I enjoyed it would always go this route.

Fauna:
There is a lot but I set it up for SPS and there are about 50 corals and 35 fish. I like tangs, wrasses, and dart fish. some shrimps. a horeshoe crab and some other randoms.
Last edited: Nov 1, 2021 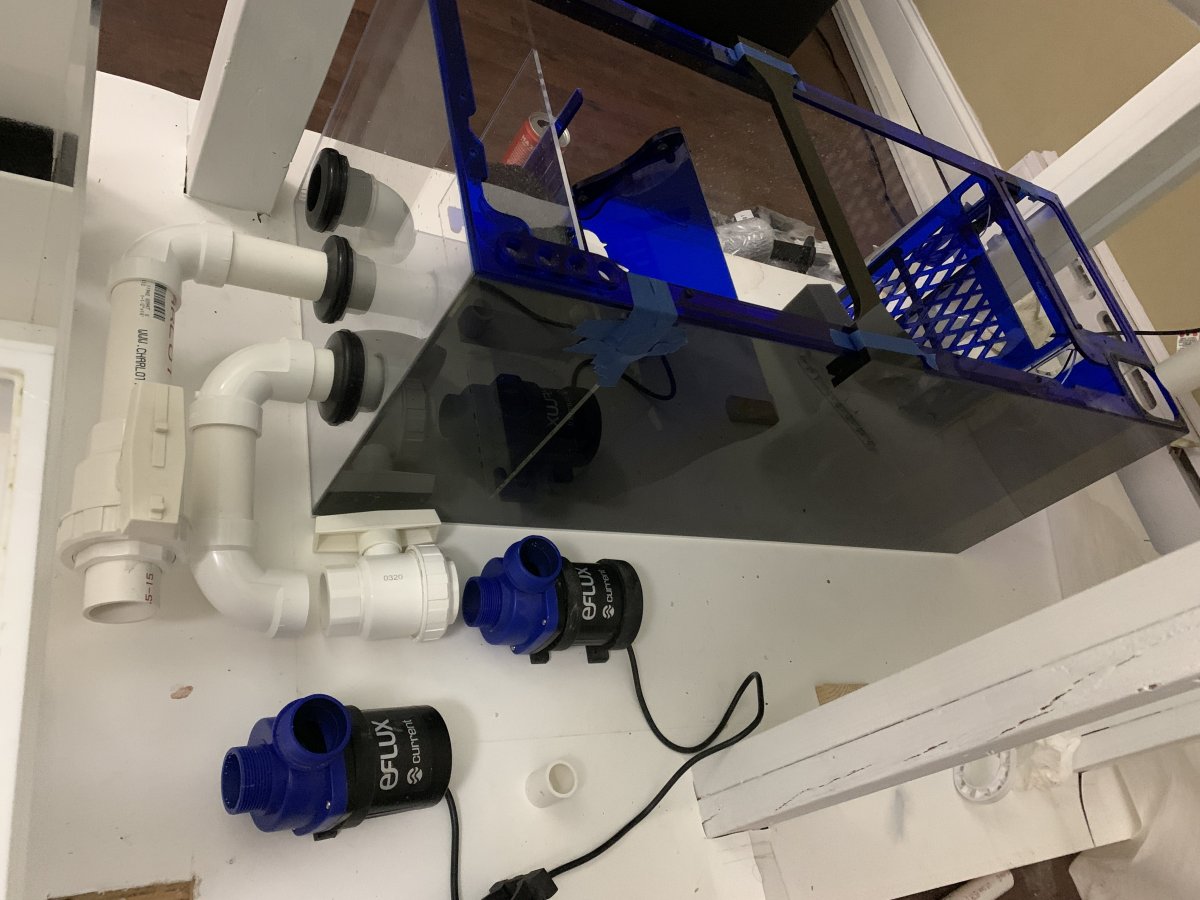 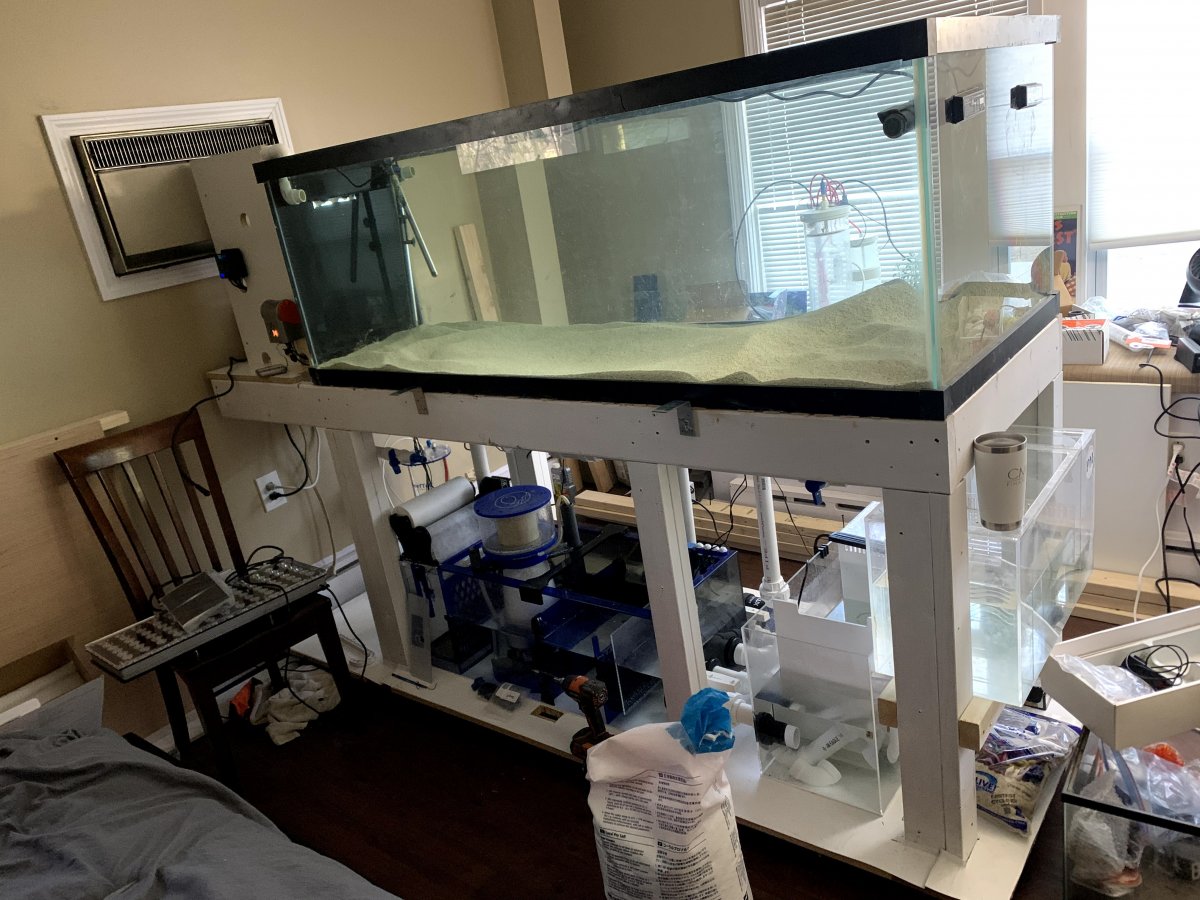 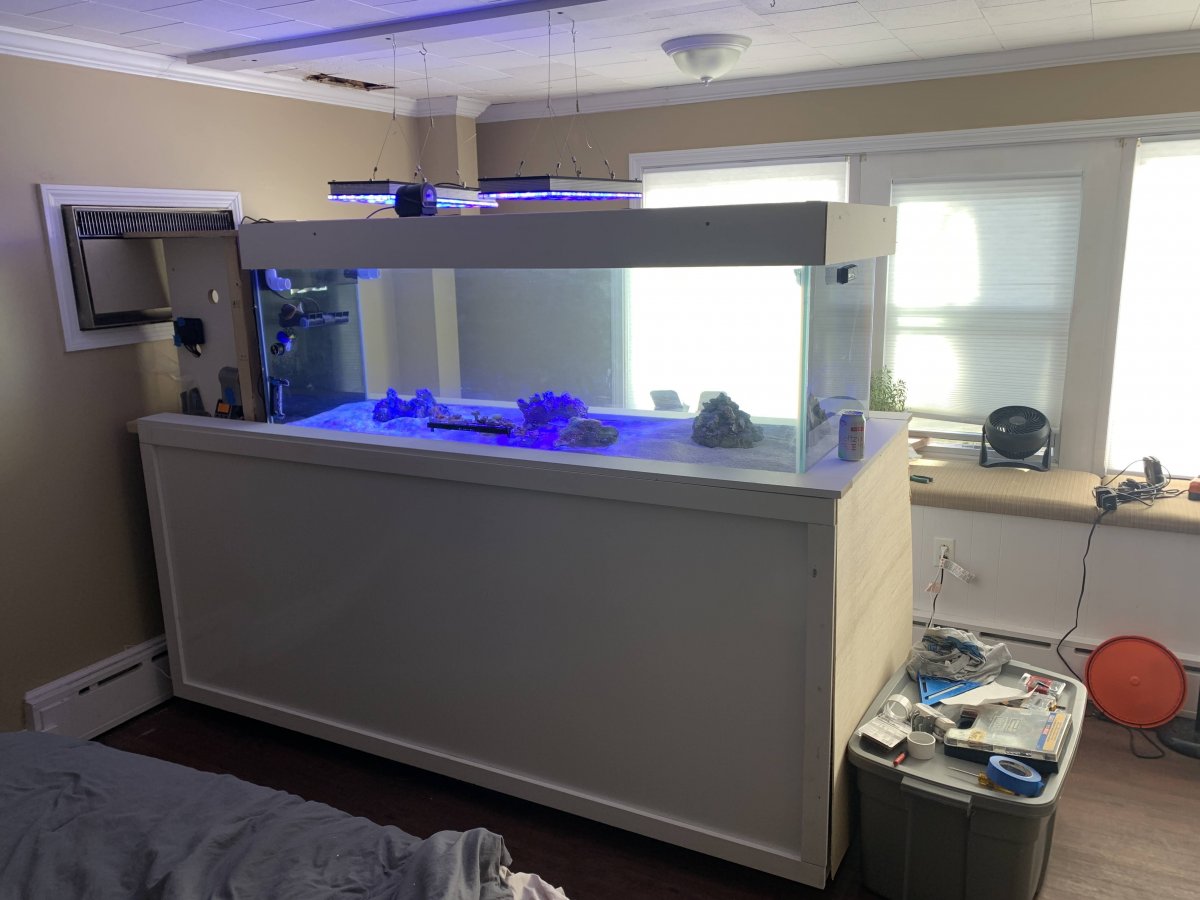 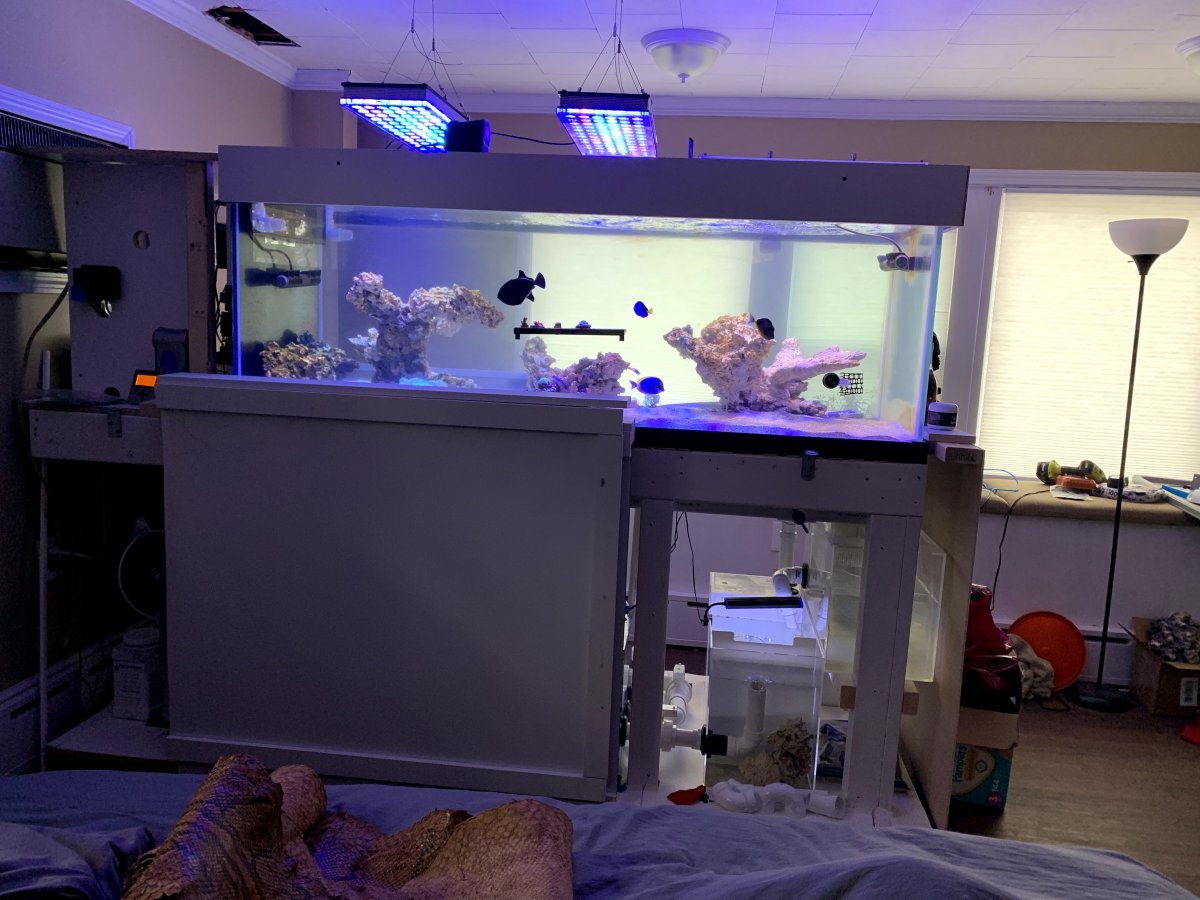 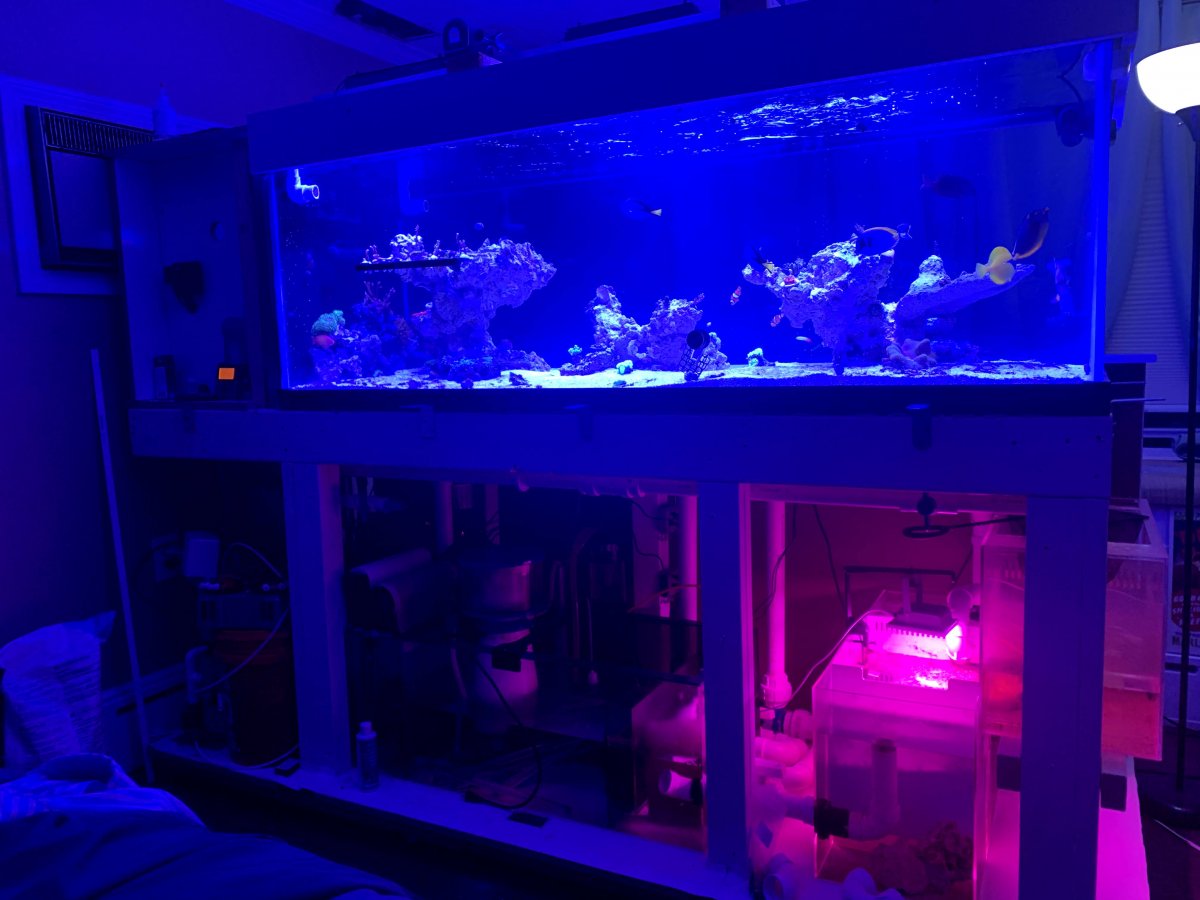 So I’m trying to decide if I should upgrade my skimmer. I have a eshopps s300 and an octo 300ect with dc pump. Pic below to show size difference. Also have a neck cleaner with the 300 which is nice when I’m out for weeks. I can run the 300 from the overflow as a direct feed since it’s recirculating.

the new brs 16years of skimming advises to use a smaller skimmer that will pull out more as opposed to a large one that may be too big and your tank may not have enough organics to create the density of foam for proper skimming.
I have 35 fish 10 medium and 20 small.
nitrates are 5-10. Phosphates are usually low 0.02 ish

C
Large Build My Waterbox 7225 Peninsula Build – If you Give a Mouse a Cookie.