I have a little more than 3 cups of cheato if anyone is interested for $15 shipped. Shipping will be via USPS first class and I would prefer to ship out early in the week to avoid weekend delays. I'm currently setting up a clean cheato grow out tank, so while this cheato was previously dipped and has been QTed for a month, it has not gone the full 72 days of QT yet and I wouldn't feel comfortable labeling it as "clean cheato".

I would love to see your new setup for tour Chaeto! Sounds pretty awesome
OP

Thanks- I'll see if I can't grab some photos. This has mostly been a Covid project for me to make my own clean cheato and I doubt I'll keep it running long term. I simply wanted to play around and see what procedures/dips would eliminate pests from the cheato without harming the actual plant.

andrewey said:
Thanks- I'll see if I can't grab some photos. This has mostly been a Covid project for me to make my own clean cheato and I doubt I'll keep it running long term. I simply wanted to play around and see what procedures/dips would eliminate pests from the cheato without harming the actual plant.
Click to expand...

Mad scientist! I like it. I would love to see this and how it could be done!!!!
OP

@bsr2430 - once I finish construction on the larger grow out vat, I'll post a picture! In the meantime, here's a photo from early on when I first started growing the clean cheato. I decided to start four cultures to have redundancy in case one culture became contaminated. In addition to a lengthy series of dips, treatments, and QT to try and remove any other organisms, I decided to grow out each culture from a single 1cm strand to minimize possible hitchhikers (and it makes it easier to scan with the microscope to confirm the dips were effective). Obviously it takes a while to grow from such a small fragment, so I simply used some 2 gallon rubbermaid containers I had on hand. 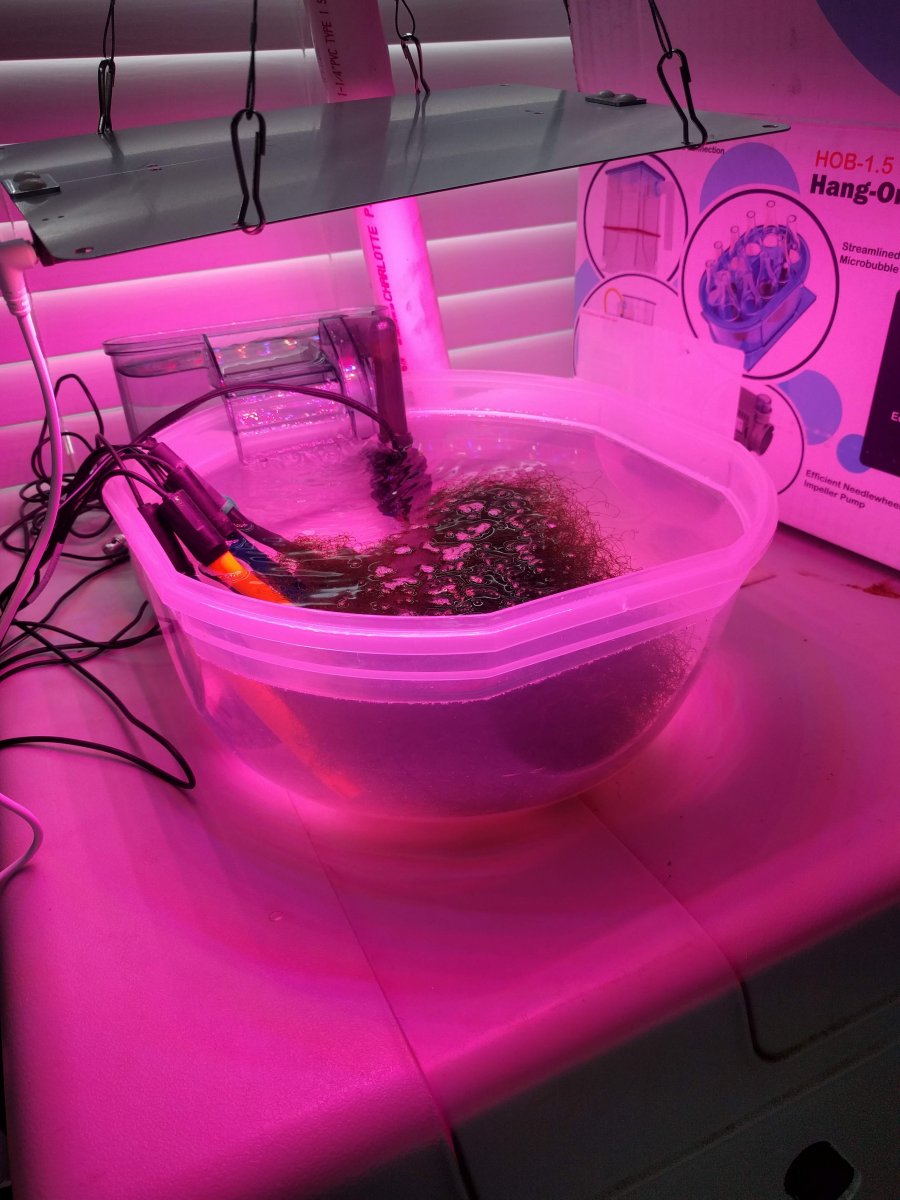 I freaking love this!!!!
You must keep me up to date on this, I’m sure many will buy from you with being 100% pest free.
Once again, I love this!
Such a great idea!
OP

Thanks! I probably won't sell too much of this stuff- I'm purposelessly going to grow it "small batch" so I can keep running tests on it- I figure most people can buy from the handful of trustworthy vendors already selling clean cheato.

I was mostly curious as to what would be necessary to effectively clean cheato- there doesn't seem to be a consensus and from what I've read, many seem to just "wing it" and do a series of dips on the cheato and hope for the best. I had access to different samples of some pests, so I was more curious to figure out what would actually be efficacious in case future hobbyists wanted to do this at home. Once I'm finished playing around, I'll probably do a write up so the information is publicly available.
You must log in or register to reply here.
Share:
Facebook Twitter Reddit Pinterest Tumblr WhatsApp Email Link