Final design for the bracing. Hopefully it's strong enough and low enough. Also with enough room to be able to clean the sand bed underneath.

I am wondering if their is any advantage in starting to cycle the dry rock and the sand in a plastic bin this week using just some basic tank starter kit (i.e. bottle bacteria)?

Its either that or I wait until the live rock and the sump, and all the fittings and pumps arrive, then start the cycle with both dry and live rock together in the main display tank. Although this would probably take a month or two longer than if I just start up the dry rock and sand cycling in a plastic bin this week... ?

Also, if I do start to cycle in a plastic bin, is it worthwhile having the sand in there too? I'm open to advice, (or a good thread/link) that I can use as a guide when cycling dry rock (and sand?) in a plastic bin.
Last edited: Jun 26, 2021
OP

I guess I'll need a good RO system to get started as well. I was thinking something like this should do the trick, but I'm not really sure what I need... 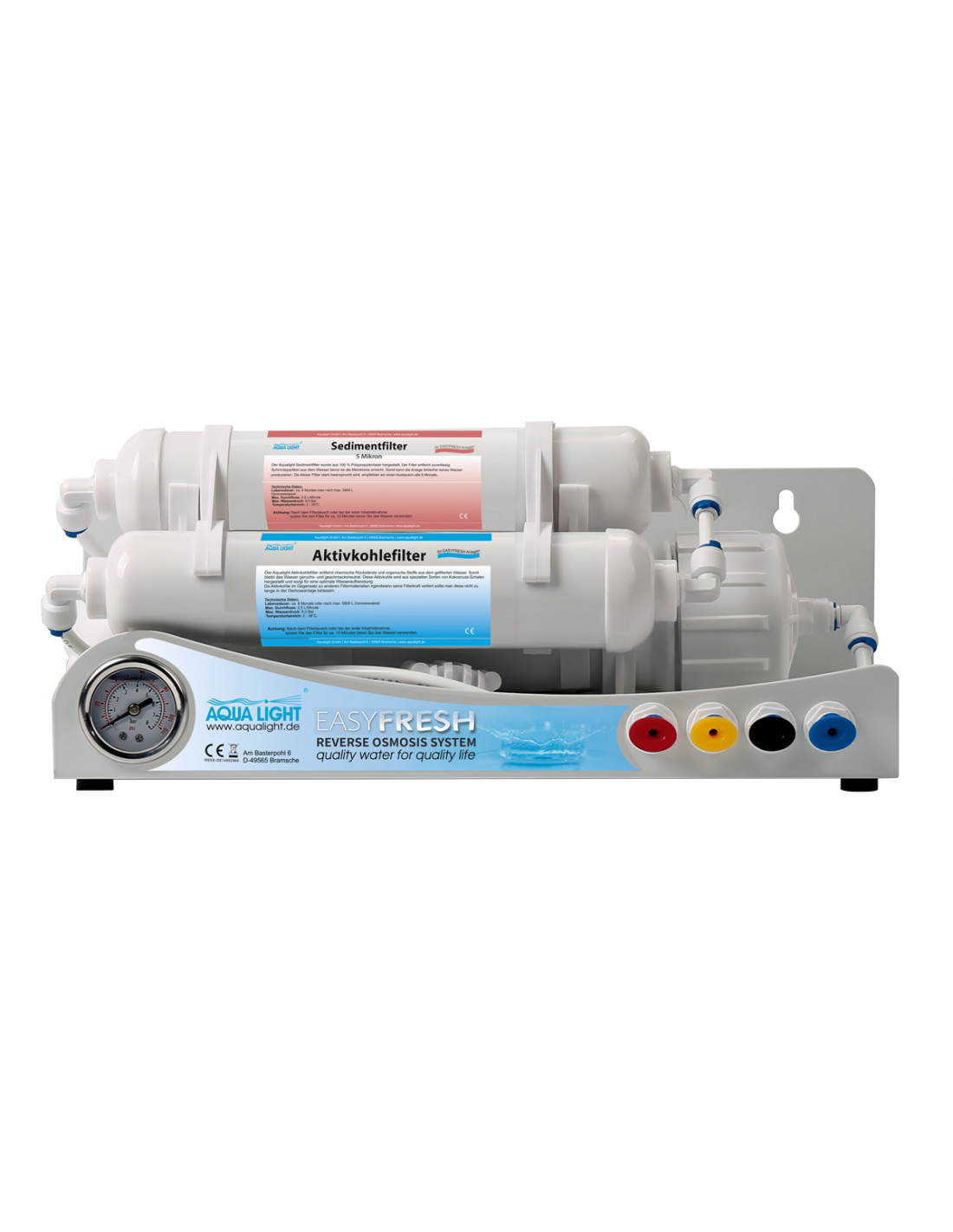 Or maybe go for the full filtered drinking water solution. Get a tap and a reservoir as well this could be a nice addition to the office! Maybe something like this: https://www.homeloft.se/products/ap...is-drinking-water-filter-system-chrome-faucet
OP

I also did this today.

Tomorrow I will start to glue the rocks in some form that can be essentially "draped" over the top of the plexiglass supports.

In future, I will add as much live rock as I can onto this base frame, and also have some small isolated live rocks perhaps standing alone in the sand bed. 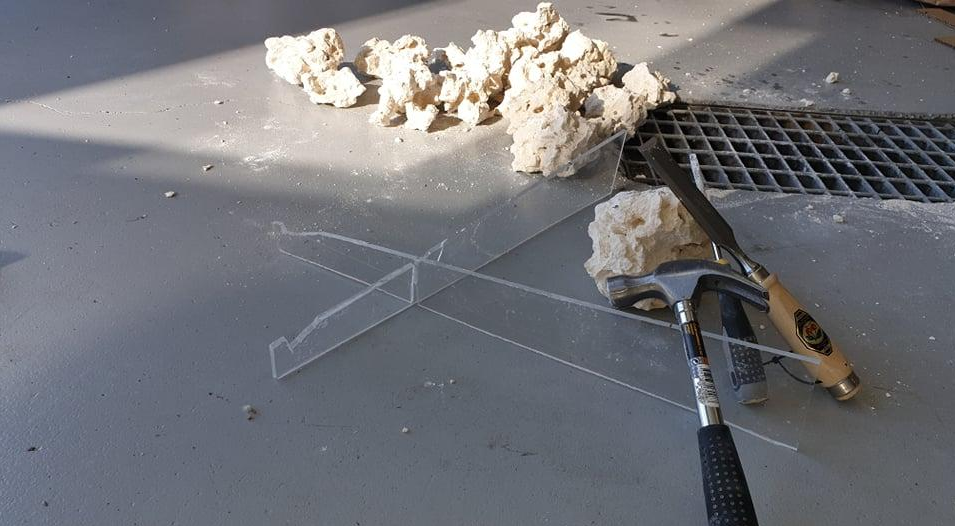 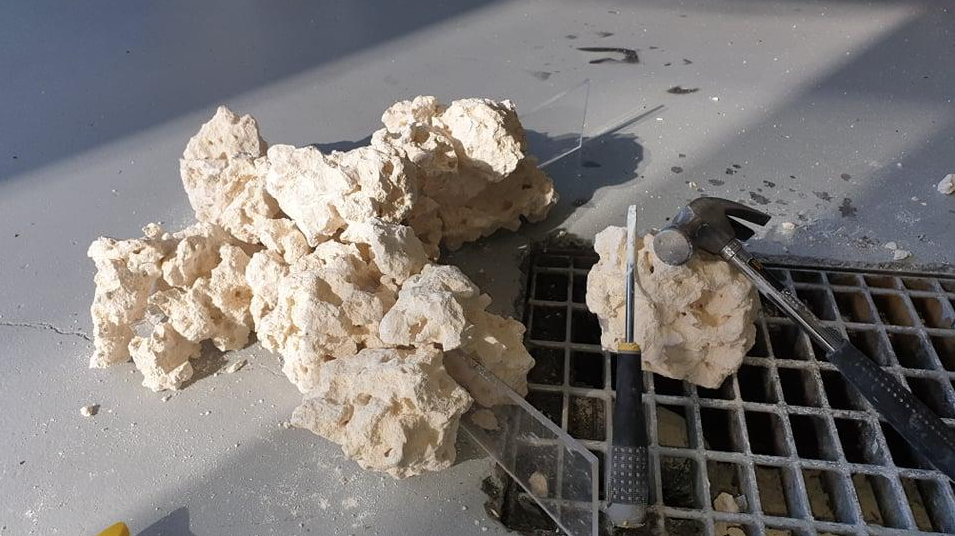 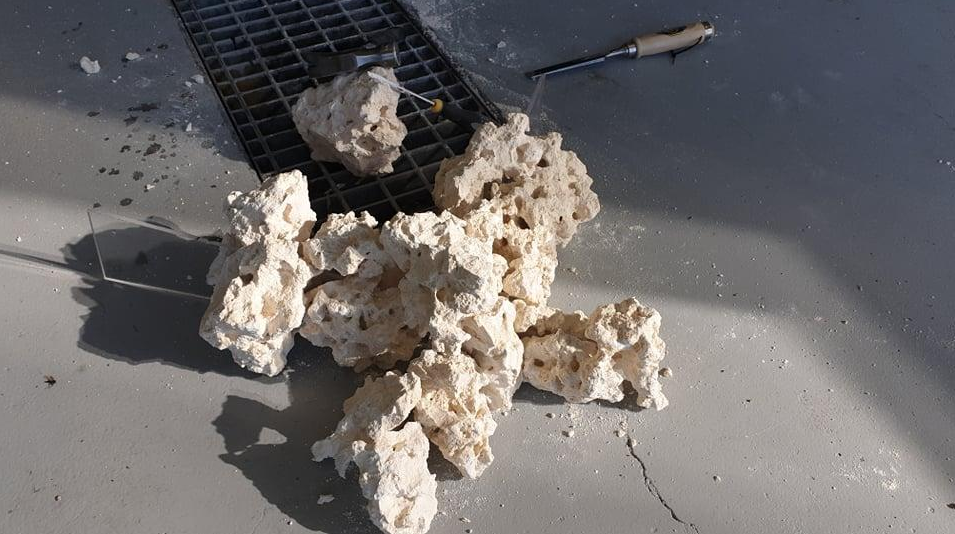 Here is my list to get the dry rock plastic bin to begin cycling. It is only a guess, since I'm an uber rookie.

After I cycle the dry rock in a plastic bin for a month or two. Then I will add it to the main display and also add real live rock as well at that point. I guess that is a good plan?
Last edited: Jun 27, 2021
OP

I've been thinking about which salt and other additives to use. I figured that the Tropic Marin Basic Care 03 strategy will hopefully work. Not sure if this is the ideal brand/method, but I guess it'll do the job? I've already ordered a different brand of bacteria starter kit though (Brightwell Aquatics MicrōBacter Starter, Clean, & QuikCycl), but I'm guessing this won't be a problem especially since I plan to add live rock soon after the cycles has started.

Apparently according to the video below if I get keen I can build my own "all for reef" too.


Feel free to let me know if anyone thinks this strategy is a bad idea for any reason? 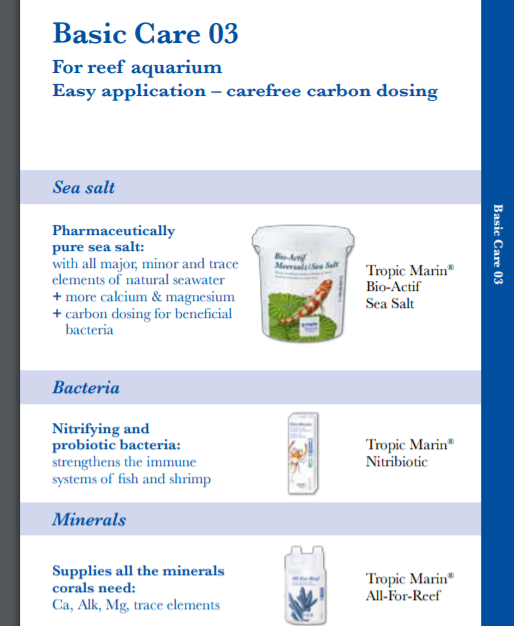 Its a good day today I hope, I finally gathered the courage to glue on the base support structure. It is two Acrylic arms glued in an X shape. I tested their breaking limit which was around 8kg per arm if the weight was all placed at the very end. Which was phenomenally stronger than I had anticipated. I glued them in place with Acrifix 0192, and used the same glue to cover them in sand so that they hopefully blend seamlessly behind the surrounding live rock and coral structures.

Tomorrow I will test the strength of the whole structure, most importantly the glue bond between the black acrylic rear plate and the clear acrylic coral support frame. Acryfix 0192 is a molecular polymer bond so technically it should be enormously stronger than silicone (if it worked). Fingers crossed it can hold a lot of weight! 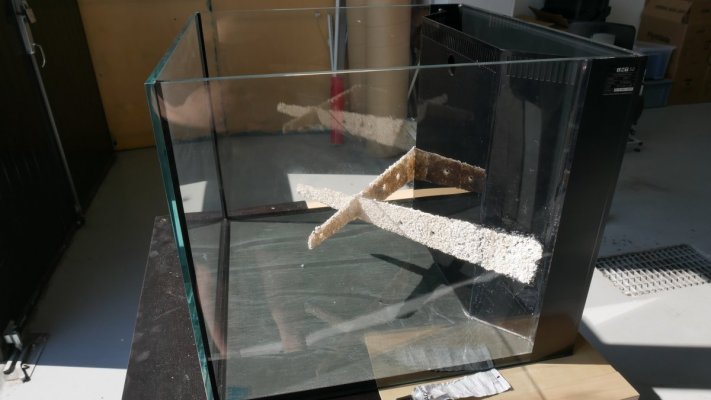 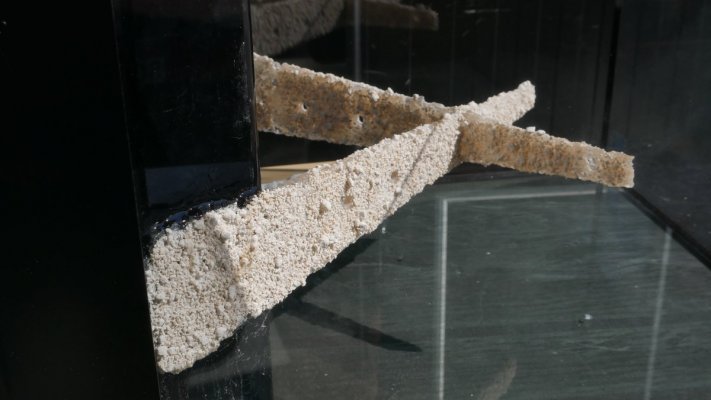 I tested the strength. The strength of the floating reef structure is truly Epic! It feels as solid as metal girders.

I will be able to hang an enormous amount of live rock and coral onto this frame.

It can carry 10-15Kg+ of stone and coral with ease. I am pretty relived that it worked, since it is a permanent change to the tank, and will be nearly impossible to remove without using a circular saw.

I can highly recommend this method to anyone that is willing to permanently optimize their tank for floating reef style aquascaping. Just keep in mind, that this bond is insanely strong, and almost impossible to break, it is similar to a metal weld, you can likely only break it using a circular saw or dremil drill.
OP

The last delivery arrived today, it took some time to get it all!

So now that I have the bacteria itself, and the salt and salinity checker have arrived, I can begin cycling the dry rock in bins. Then once I have the tank itself ready and the sump connected, then I'll move the dry rock from the bins into the tank and then add live rock as well. I wonder, does that sound wise, or am I lining myself up for problems? Perhaps I should add some live rock in the bins as well to get it started with a bang!

Either way, lots of fun to have over the next week or two! 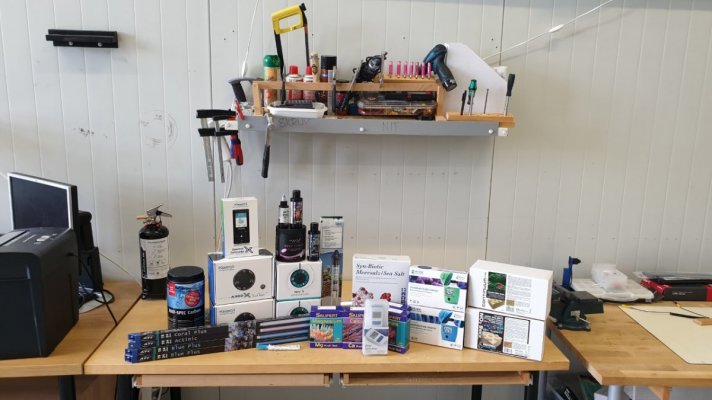 I already got started on the DYI lighting solution. This is its first incarnation. My plan is to hang on some black Acrylic covers to make the outside look tidy and sleek. Although that may be easier said than done. If the Acrylic fails, I can always just use wet area cabinet wood to complete the black-box look.

All the lights can be moved left, right, up, or down by either sliding them along the alloy rails, or by changing the respective screw hole height on the upright braces. This should hopefully allow me to get the ideal positioning if I ever get my hands on a par meter. 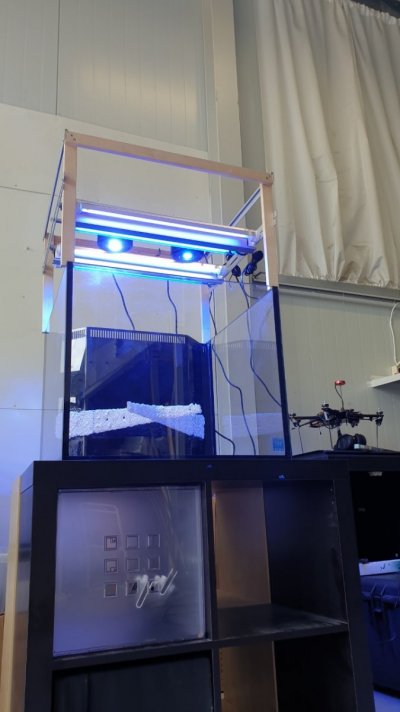 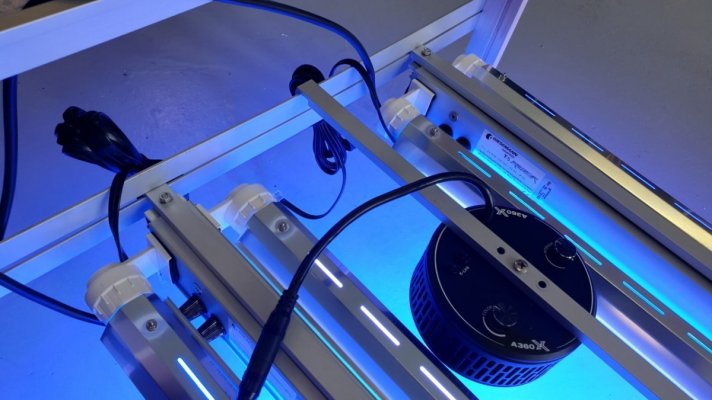 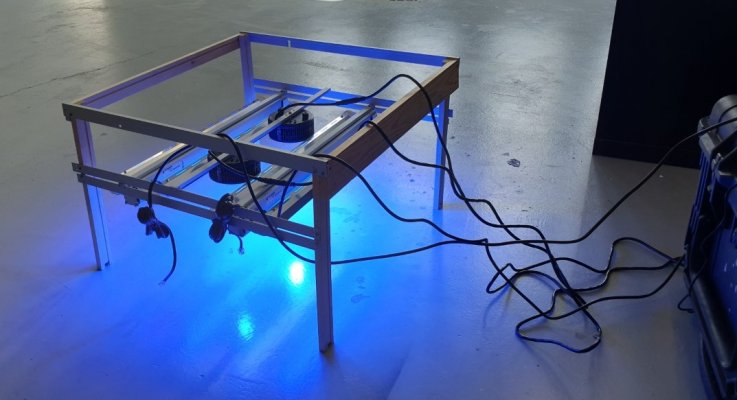 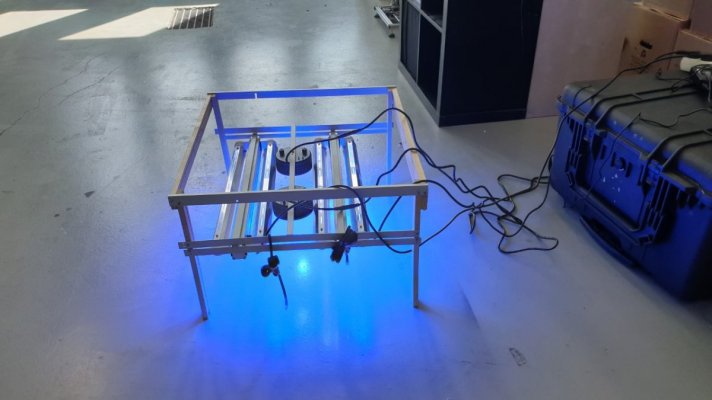 This is very cool so far!
OP

Thanks Revhtree, this is my favorite photo so far... The floating reef frame is already looking luminous under the lights. 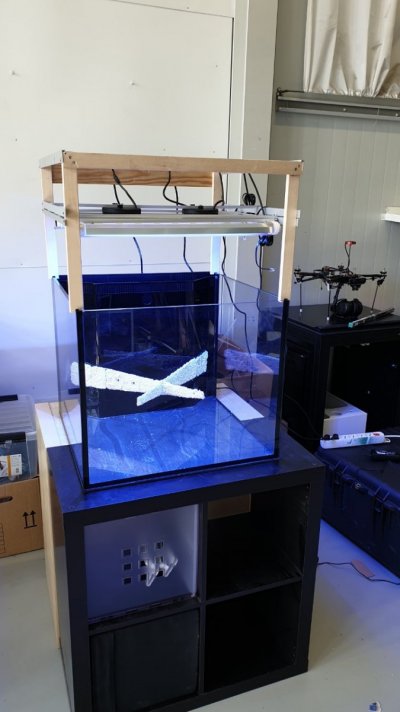 The cycle is finally started. I added "MicroBacter_StartXLM" and "MicroBacter_QuikCycl." in a 60L plastic tub with 1kg of live rock. I'm using a Sicce AC pump for flow from the large box into the smaller box, and have the sand at the bottom of the smaller box. I also have two ceramic bricks in there and a bunch of dry rock.
I ordered two normal bricks, but they sent me one normal brick and one NO3 brick. I'm not sure what the NO3 brick does, or if it will do more harm than good in a new tank. I just threw it in their and hoped for the best...

Overall, I'll try and maximize the amount of live rock if I can. 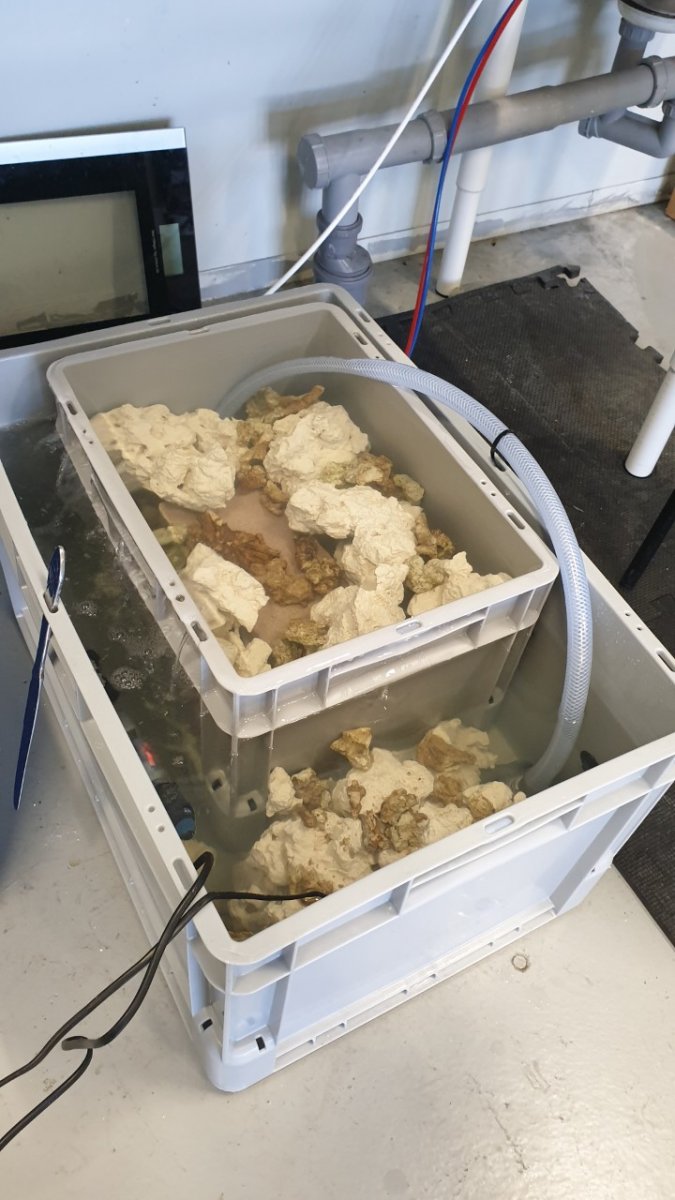 Following! So cool the floating designs!