500g Reef Tank Build Saga: A Guide on What Not to Do

I've been in the reef tank hobby for about 15 years now. I started with a 30 gallon freshwater tank converted to saltwater and then over the years, like most of us, that evolved into a 120, I moved, downsized to a 75, which the next year doubled to a 150...I moved again and decided if I was going through all the effort to move everything I might as well put it in a bigger tank, a 240. Then of course I moved again, and had the same moment of clarity and ended up with a 320. I've always been interested in building tanks, so the 150 and the 240 were both built in my garage out of acrylic when I lived in Florida. They were a ton of fun to do but since I felt like I had gotten pretty good at that I decided the next tank was going to be, of course, even bigger! I was wooed by posts at MonsterFishKeepers about plywood tanks. I said to myself, "That looks easy enough!" So I started down the path of designing and building a plywood tank with acrylic windows. As the title of this thread implies, that was a colossal mistake. I certainly made some bonehead decisions along the way, but I really want this thread to be a word of caution, and maybe you can learn from some of the issues I ran into and mistakes I made. #nofilter

You may be asking yourself why I would go and replace a 320 with a larger tank, or maybe not, because bigger in this hobby is universally better. But I really would have been ok with keeping this tank. 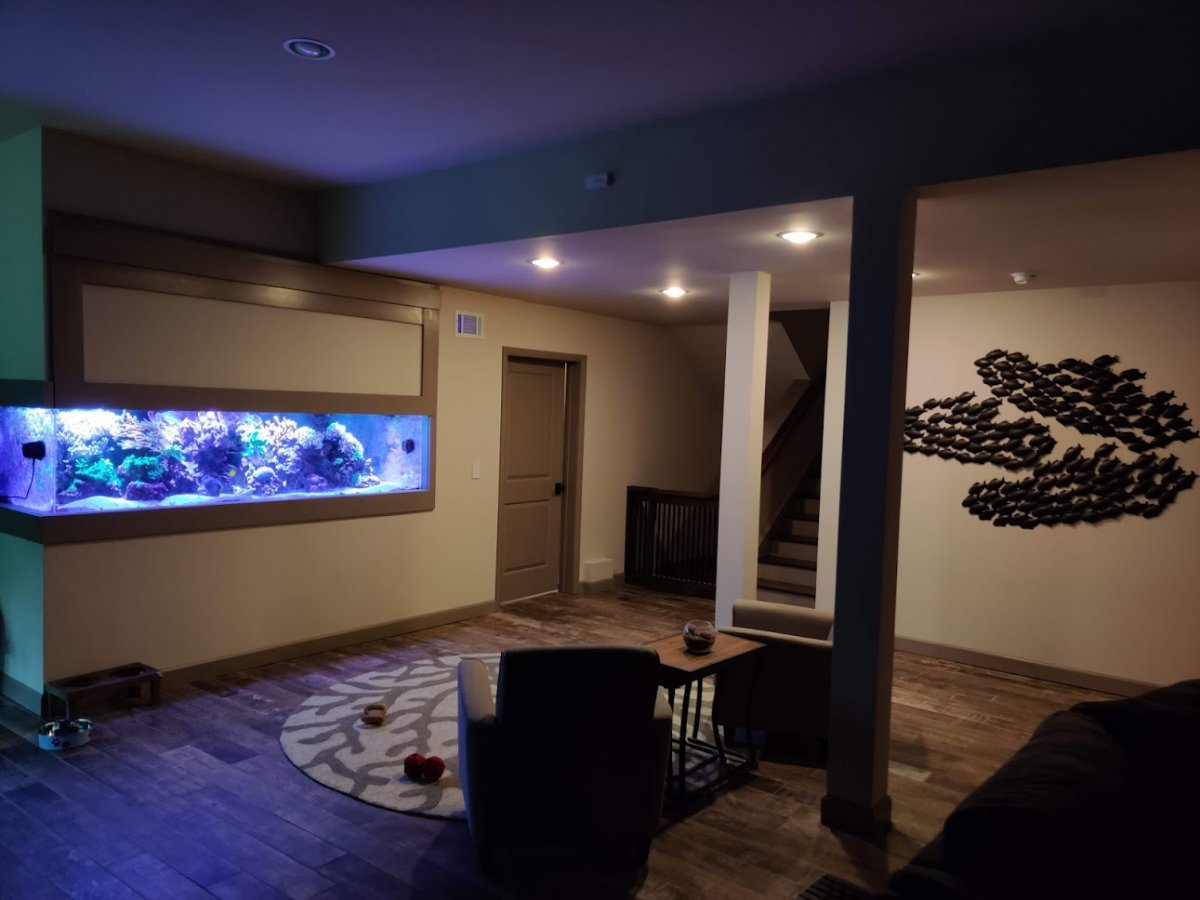 It's just that it has crazed badly. Unfortunately, the previous tank was at my place of employment. To make a long story short, my boss decided to move to New York on short notice so I needed a solution quickly and didn't have time to build a new tank and I really didn't want to risk moving a 240 (I worked for a University at the time and he was moving the lab! The tank was in our reception area). I ordered a 96x36x24 from FishTanksDirect which is another long story but to keep it short, they make tanks out of acrylic that's far too thin, it bowed and crazed on both viewing panes. I hated looking at the thing. 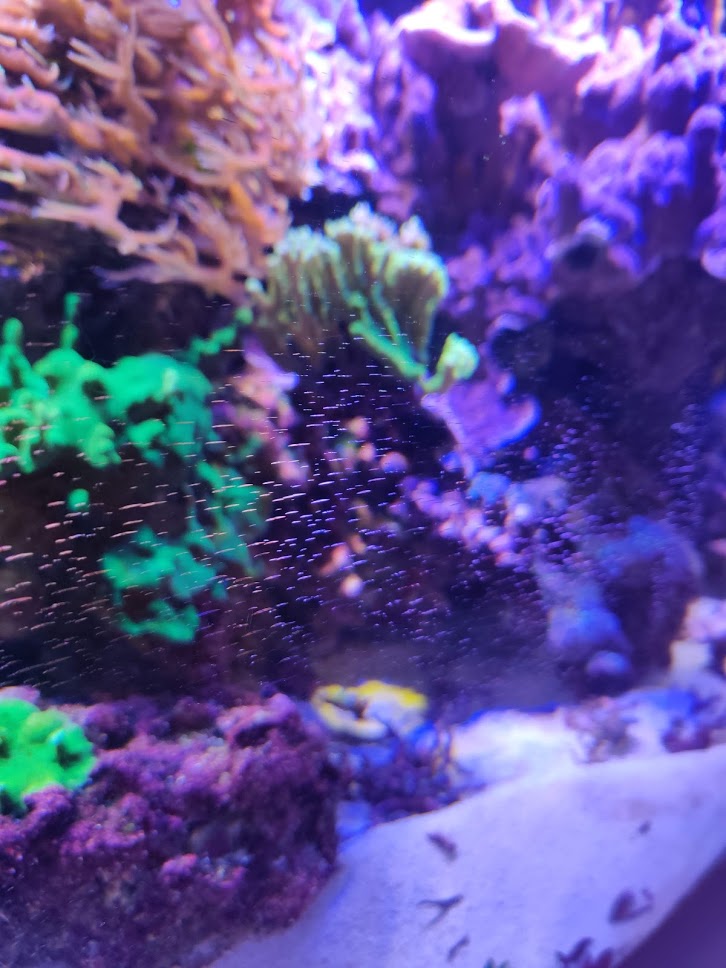 And that's when, after spending countless hours on MonsterFishKeepers and watching youtube videos I got the bright idea to build a plywood and acrylic tank (spoiler, there are only a handful of ways to be successful with acrylic windows...just use glass). I designed the whole thing in SketchUp to be sure all of the measurements were right and finally pulled the trigger on the build last September (It hurts to type that).

I filled up the CUV at Lowes with some wood and ordered all of the necessary components for the build of this monster which turned out to have outside dimensions of 105x43x43, internal dimensions were 97x37x37, so just over 500 gallons. On the next post I'll go into the details of the build of the tank, the problems I ran into and the 1200watt DIY light fixture I assembled for this project.

C’mon, more details! This is like a good story with a teaser/cliffhanger.
So, I am subscribing to it

Urtoo said:
C’mon, more details! This is like a good story with a teaser/cliffhanger.
So, I am subscribing to it
Click to expand...

I contemplated posting everything all at once but then I realized how long that was going to take. You'll appreciate my pain and suffering more if I drag it out in installments. I promise.

What was the thickness of the acrylic on the tank that crazed and bowed?
OP
H

Thanks for your reply. How long did it take before the crazing and bowing started?
OP
H

Bowing was immediate, the micro scratches showed up within a year, more stopped appearing after 2 years. It's inevitable with acrylic if it bends or bows. The outside of the tank is stretching and the inside is compressing. What makes it worse is they're not removable. I've heard some people having success with 400-2000grit sanding, but then you're just making the plastic even thinner so they'll come back. Best to just build with the proper thickness for your length and height. The "holds water" thickness is much thinner than the "doesn't craze" thickness. The cyro calculator is basically 3/4" to 24h, 1" to 30h, 1.25" to 36h. You'll see a lot of people on line quote that .25" less at each height "works." My definition of works might be different, or maybe others don't mind this happening eventually. There's also the whole, "not every manufacturer has the same density" argument so what works for Acrylite won't work for Chemcast but it's fine for Marga, etc. Fun times. Just go thicker and don't worry about it.

h2so4hurts said:
You'll appreciate my pain and suffering more if I drag it out in installments. I promise.
Click to expand...

Just lie back on the couch now and tell me "how does that make you feel?"

h2so4hurts said:
I ordered a 96x36x24 from FishTanksDirect which is another long story but to keep it short, they make tanks out of acrylic that's far too thin, it bowed and crazed on both viewing panes.
Click to expand...

Ouch .... my current 450 is one of their Tsunami tanks (96x36x30). They list it as having 3/4" acrylic sides but that seemed awfully thin to me so I had them go up to 1". I don't see observable bowing and no crazing after being setup for 28 months. Hopefully that holds.
OP
H

You were smart, see two posts above.

Thanks for sharing. Another reason that I will continue to use glass for my tanks.
OP
H

AlexG said:
Thanks for sharing. Another reason that I will continue to use glass for my tanks.
Click to expand...

Hopefully you stick around for the fun parts Your build thread is impressive!

h2so4hurts said:
Hopefully you stick around for the fun parts Your build thread is impressive!
Click to expand...

I will be watching this one for sure. Sorry things have not worked out as planned on your build. Sharing lessons learned though is valuable to everyone thanks again for sharing. I had my fair share of challenges with my system build. When my big tank was bowing on a test fill it was not a good feeling but I shared what happened so others could learn from my mistake.

ca1ore said:
Ouch .... my current 450 is one of their Tsunami tanks (96x36x30). They list it as having 3/4" acrylic sides but that seemed awfully thin to me so I had them go up to 1". I don't see observable bowing and no crazing after being setup for 28 months. Hopefully that holds.
Click to expand...

h2so4hurts said:
You were smart, see two posts above.
Click to expand...

this is very interesting. ive had a plan to use my 48x21in glass (big box store) tanks front panel as the viewing window for a plywood tank. not for salt but for my main large planted fresh and discus tank with the plywood part going through the wall into the fishroom. my understanding is that with 3/4 ply; waterproof epoxy the inside; fiberglass the joints/the whole thing, and I have a tank that should easily last the 20 years a normal glass tank is expected to last. Very interested to hear your experience with the plywood itself. My viewing panel will be glass though. thanks for sharing

AlexG said:
Thanks for sharing. Another reason that I will continue to use glass for my tanks.
Click to expand...

One time... just one time I went with acrylic because I designed a 2-tank setup (185g each) flanking three stairs leading to my sunken living room. I wanted circular ends, and that's not an easy do with glass. Cleaning the sides was torture and my heart broke with every scratch.