Nearly 10 years ago, I set up my 75gallon for the first time, only to tear it down on its one year anniversary due to new job/training/relocation (I'm military). My reclass ultimately got canceled and I've been too bitter about the situation set up the aquarium since. I had just reached the point where I felt the tank was ready for the creatures I wanted to keep and had designed my stocking plan around.

I want to setup my indo pacific biotope tank again, centered around the spotted foxface and mandarinfish and a few lps corals/anemones. Any other indo-pacific creatures in the tank are selected based on the job they perform to sustain the ecosystem.

So here we go again, setup 2.0. My aquarium is a 75 gallon glass tank on a stand and canopy I made in 2010. I am very much a beginner and have only cared for a school of chromis and a detritus team of various sand sifting stars, crabs and snails. I started adding water yesterday and should be done by tomorrow.

For my filtration system, I like to incorporate both mechanical and biological filtration methods. I have a HOB overflow to get the water from the display tank to the sump. My sump is a standard 40 gallon breeder with acrylic baffles. I used OPTIX 24 in. x 36 in. x 0.177 in. Temper Elite Green Edge Acrylic for my baffles. It bonded to the glass pretty well and we'll see how it holds over time. In the sump, the dual overflow goes to a roller mat with a back up emptying into the skimmer in case things get backed up in the primary. The skimmer section is next followed by a refugium area for copepods and other critters/bateria to establish colonies. After this is a spot to toss cheato or some sort of nutrient absorbing algea. Finally the return and ATO section, that will get the water back into the display tank via 3 locline returns that can be postitioned anywhere. I also have 3 mag mount power heads for flow. I love the flexibility of the locline and mag mount power heads. I'll finish the equipment list in an update and post more pictures once the system is up and running. 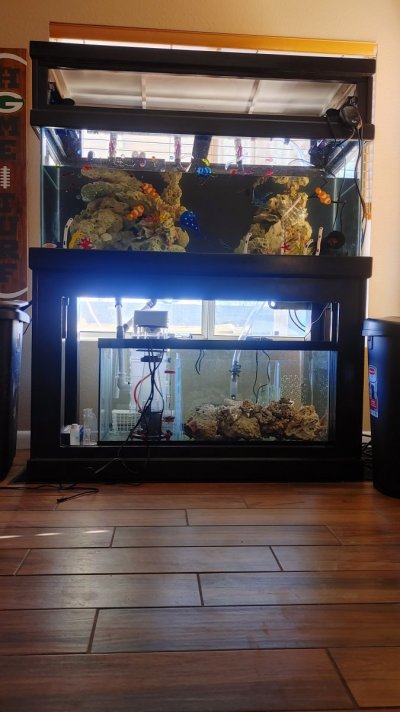 Best of luck with your current build!
OP
S

1 month update
Things have been going well and over the past month I have added live sand and kept the lights off. I also threw a shrimp in for the initial tank cycling nearly three weeks ago.

Today we picked up our first inhabitants, a rose bubble tip anemone and two clownfish. Both the anemone and clownfish are aquacultured.

This is going to be the longest 2-3 hours if my life.