Display/topside:
1.75g aquaeon glass tank. Only overflow drilled, the return is still just a pvc over the top. Got used from dude getting out of hobby came with 20 gallon sump underneath, cheap led light, 300w heater, ancient salt, overflow utube box, which I broke, so made a custom pvc diy jig. Had to set it to a relay, to keep return pump off after losing power, flooding kitchen and almost burning out my magnum 9 pump, which came with as well.
2. Kessil ap700 x1. Custom program, 0900-2100, sky blue except for ~1hour in am and ~1 hr PM, where its ocean blue... saltwateraquarium.com. I built a custom black pipe stand/rack for the light/ painted with rustoleum flat black.
3. Single box overflow, cpr brand about 8x5x6. 1" pipe. Schedule 40. Plumbed through floor. 1 inch reamed schedule 40 pvc flange. Plumbing from top to bottom (approx measurements). 1" bulkhead, 1" screw to reg pvc adapter, 2" straight, T- fitting up is a 6" straight with cap and a 1/4 tubing for venting, down is ~ 45" straight with straight coupler( cause we glued the union wrong and had to swap ends), union, straight coupler (this supports the topside pipe via resting on the flange. 3/4 return has same design); below floor: 12" straight 90 elbow, 3" straight, 90 elbow, 18" straight with union, spears gate valve 1". SPEARS-BRS. PLUMBING HOME DEPOT. CPR OVERFLOW AND BULKHEAD- not so lfs, beyondthereef, Schaumburg, IL.
4. (HOME DEPOT)3/4" return, schedule 40, plumbed through floor, flange reamed. See below.
5. (AMAZON) 2x current usa 1050gph wavemaker pumps, 1 is stream the other surge opposing. Uses a controller. No wifi though, dont need it really.
In basement:
1. (AMAZON)Smartaqua 75gpd rodi constant supply to-->
2. Brute 35g (~28g usable) reservoir. HOME DEPOT.
3. Smartbuddies booster pump and gauge (Glycerin). BRS.
3. Brs dual gfo and carbon reactors, with sicce pump. BRS-all except tubing, did not use the supplies tubing as too rigid and too short for my setup, swapped for 1/2id x 3/8od clear tubing. The one coupler has a bad o-ring but its inside dump so currently in use, but needs replacing. Need to integrate a 3 way T with valve to facilitate siphon water changes
4. Hygger hg915 4000 DC return pump, key note I have approximately 11.5ft of head pressure (fhp) this pump is rated for 13 fhp. I can only go down to about 80% of power before pump is overwhelmed. In the 3/4 return plumbing from bottom up---> (approx measurements) 16inch straight, 45 elbow, spears gate valve (emergency), union, 24" straight pipe, 45 elbow, ; topside 51" straight, straight coupler, union, 90 elbow, 5" straight, 45 elbow3 inch straight, 45 elbow, 40" straight, 90 elbow. BRS (spears)
5. (Power distributor/strip) ADJ PC-100A with belkin surge protector. 72000Amp protection. 8x10A plugs 15A total. Amazon
In sump:
1. Fiji cube 40g baffle kit. 3x filter sock from lfs; free swap from lfs, cause I spend at least 50$ a week there. I like the set up, but they really should have swapped the fuge and equipment compartments, cause the sponges to keep out macro are on the other side of the equipment, my cheato will make it into the skimmer pump and reactor pump, but not the return area. And that's too many pumps in one area... Amazon
2. 1x300w(back up, the old heater) heater and 1x200w new heater aqueon primary with inkbird controller. Set @79deg. Petsmart new heater, amazon inkbird heater controller.
3. Simplicity 240dc skimmer, has not broken in yet. Amazon.
4. Cover is a piece of 1/4 plexiglas custom(shoddily by me) drilled and cut for various tubing and cords. Area glass and tile (store name).
5. (Overhead) 1x 65w canagrow grolight. Amazon
~80 lbs of live rock plus 40lbs of dry medium substrate, ~30lbs live (came with tank, but didn't use all of it) coarse substrate, 20lbs of sand, 30lbs live[justadded]) display 10lbs of live sand went into the refugium/cheato chamber) and everywhere else a sprinkling. Carribsand PETSMART. 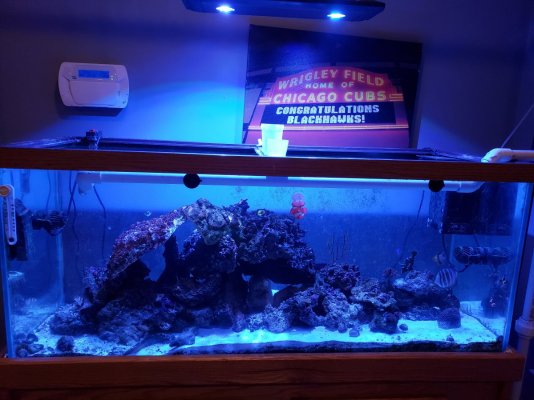 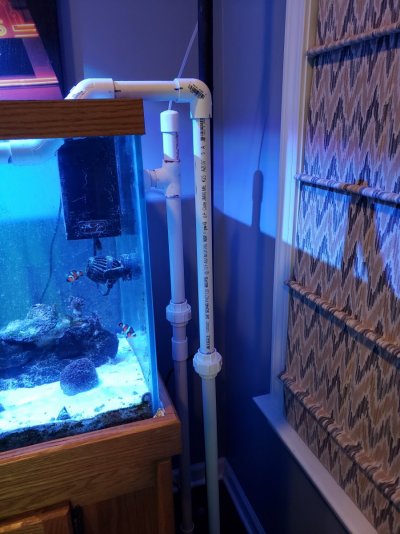 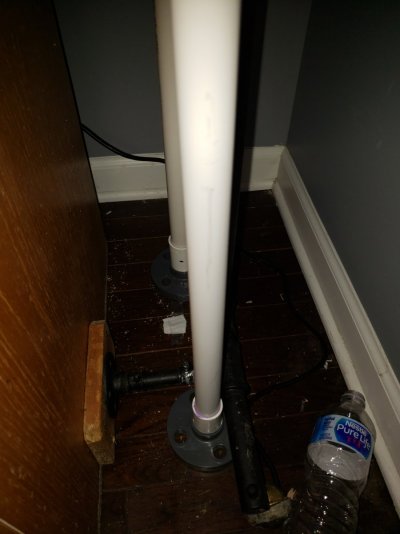 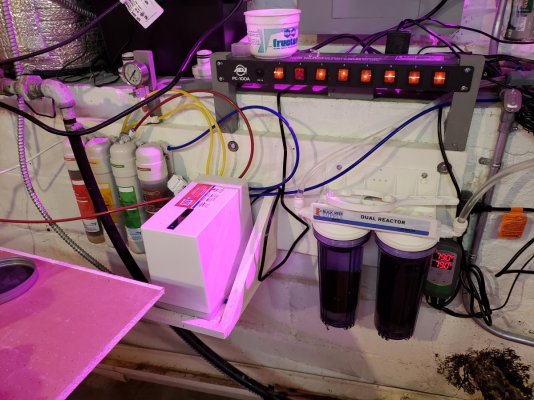 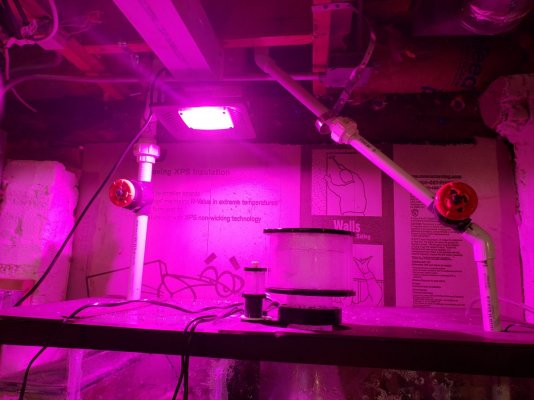 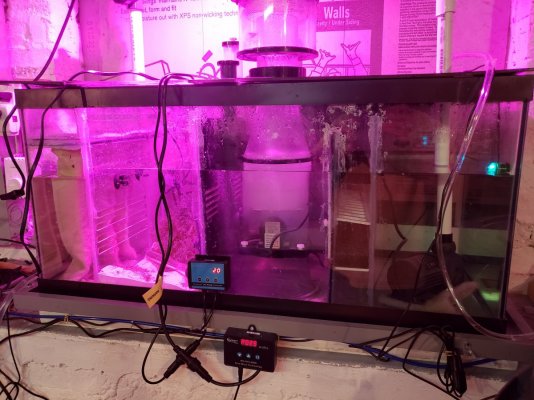 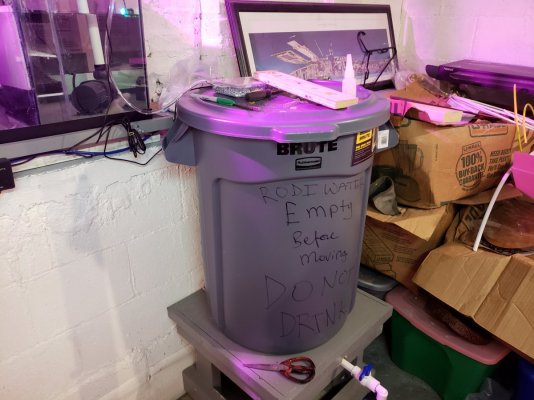 Wyze plugs are a must!