My partner and I bought a house together in January, and we officially took the keys just before February 1st. One of the many awesome features about the house is that it is brand new and has an unfinished storage area directly under the foyer, including an exposed support beam. The foyer is also where we knew we were putting my home office, and it had a large 125" wall that separated the foyer from the kitchen. We also had seen this wall before the drywall was put up, and knew approximately where we could open the wall back up to run plumbing. Given that we both occasionally work from home (during COVID, I'm 100%), we knew we wanted to put all the equipment in the basement, and it was large enough I could carve out a decent section for a fish room. This was also good considering that I wanted to save our engineered hardwood floors from major water spills, and doing maintenance in the basement would certainly help with that. Additionally, the support beam was directly under where I wanted to put the display, so there were no concerns about weight distribution or sagging floors.

I had owned a 66g SCA cube previously, and I really like the SCA tanks as a great product at a good price. While I really really wanted a 180g tank, I opted for a 150g. With the wall being 125", I could easily take 60" of that space for a tank and still have room for 30" cabinet on either side, which would provide us the office storage we also needed. I simply couldn't get the same symmetry with the 180g. So I ordered the 150g to the new house, and as soon as we got the keys to our NEWLY built home, we started cutting into the drywall! Who does that?! Yep, reefers!

So here's the final photo of the build, but I'm going to add posts that describe the process, the ups and downs, and my reefing journey overall. And then follow along as I try to keep everything alive over the next few years! 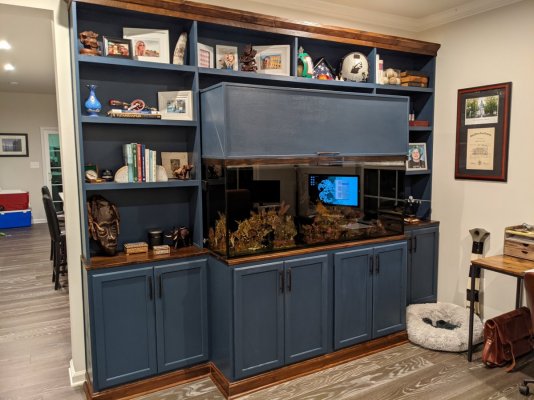 Build Thread Build it, and they will come. My 350G in-wall tank