About the Eshopps PF-1200 Hang On Back Overflow...

When I started in the hobby, my first sump was an Eshopps wet/dry with plastic bio balls (remember those?) and included a hang on back overflow with an over the top return.

I can never make up my mind. Even when I plan a build to the last detail, there is always something I would do differently when I am done. And this has resulted in my having to replace many glass panes over the years, from failed drilling to configuration changes.

I'm reconfiguring a tank which uses a 40 long as a display and a 33 long as a sump. And since I'm never happy with a build, I decided to use the Eshopps PF-1200 HOB overflow.

And since I am always making changes to my builds, I found it best to use petroleum jelly to connect the sections. I rely on friction to hold the sections together and the petroleum jelly seals the joints. I've never had a separation (now I've done it), and only an occasional drip. 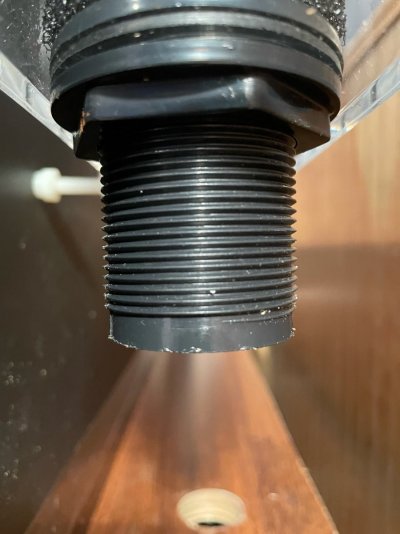 This is the 1" bulkhead that comes with the PF-1200 (it comes with two). It is threaded on the outside and uses a 1" slip fitting inside. Since I don't like to use glue, my plan was to screw a coupler on the end and glue the 1" PVC pipe to the coupler, preserving the bulkhead. But notice the threading doesn't go to the edge, so, if there is a threaded coupler that can screw to the end of the bulkhead, it isn't a standard coupler you can get from the local hardware store. So I was forced to use it as a slip connection.

I did notice that the slip fitment isn't as snug as when connecting two pieced of PVC with, say, a 90 degree elbow. And I was afraid that over time, gravity would cause the PVC to drop out from within the bulkhead, resulting in a flood. So, I came up with this added layer of protection... 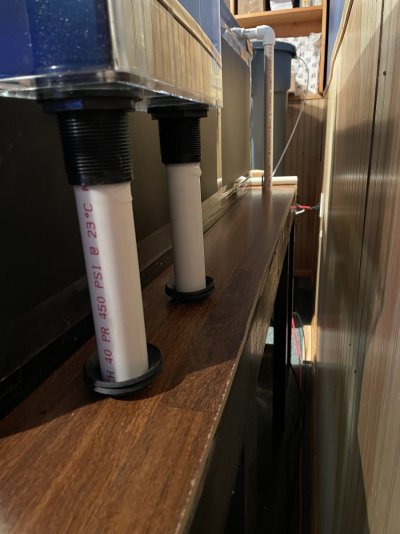 I've placed a 1" uniseal on each drain pipe right above where the drain pipe passes through the top of the stand. I've also substituted clear aquarium safe silicon instead of petroleum jelly. This will act as an adhesive but can still be twisted out preserving the bulkhead in the event of another configuration change.

The build quality leaves something to be desired. While the exterior portion of the overflow is made with a heavier acrylic, the in-tank portion is thin and rather flimsy. Additionally, the drain tubes in the overflow have air tubes glued to the inside to prevent gurgling. These were hot glued in place and one was broken off when I opened the box. Again, aquarium safe silicon worked great to glue it back in place.

So at this point, the overflow is in place and the silicon is drying. Tomorrow at noon, I will begin the leak test.

Glue the pipes in. Preserve the bulkheads by leaving a straight section below them you can cut and attach a new fitting to.

M
Which overflow box is better

T
Help me silence my Waterbox overflow...fluctuating level problem and air getting in the drain (Video)