What's up guys, I thought I'd share an awesome new piece of equipment I picked up from WWW.CoralVue.com which was the kamoer F4PRO wifi doser. I had been using a cheap off brand doser for a couple years, and while it worked ok it certainly wasnt quality of any level. With a dosing pump being one of the most vital pieces of equipment for our reef tanks, the need came to upgrade my doser and I chose the kamoer. Here I will be actively updating my review on this piece of equipment as I use it over the next coming months to hopefully answer any questions and fill any curiosities you've had about the product.

Right out of the gate this thing was impressive. Its packed neatly in a box protecting all of its components. 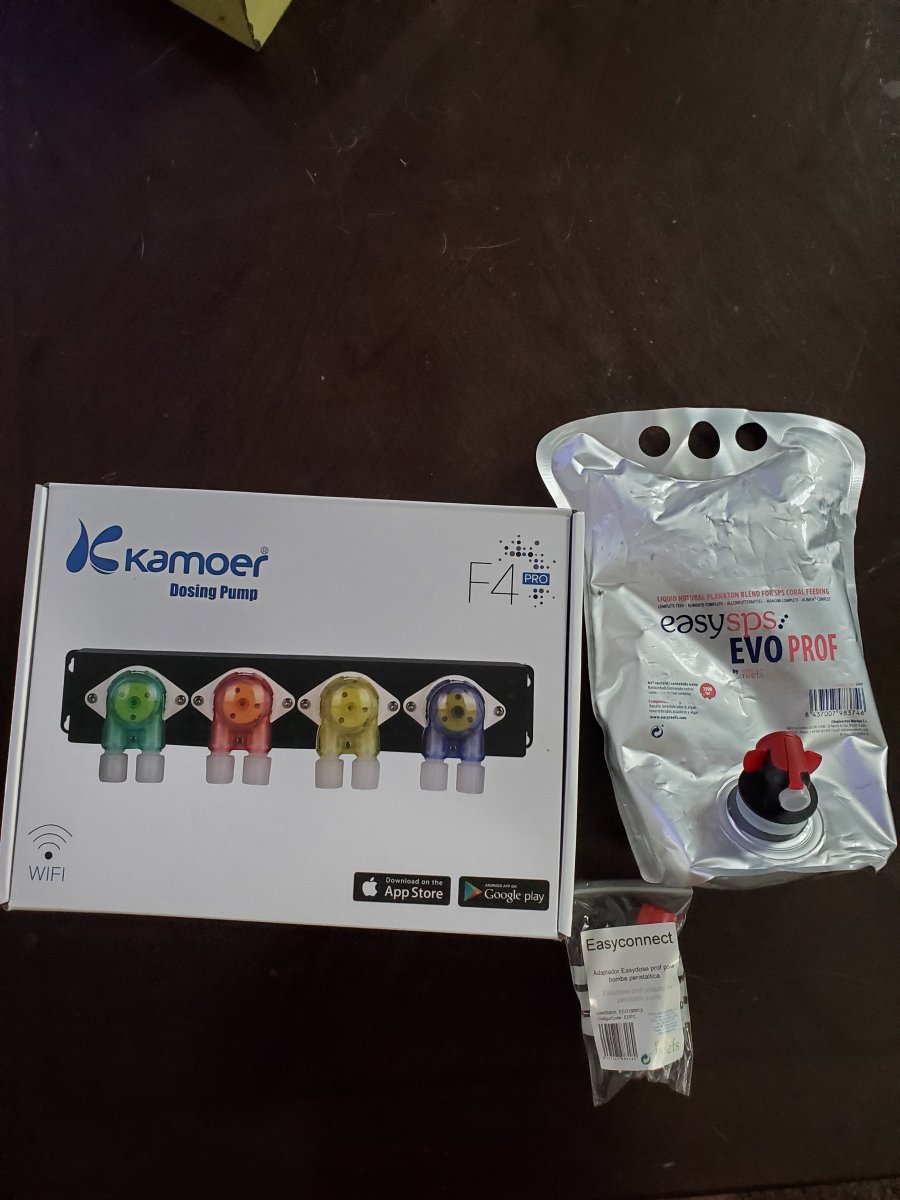 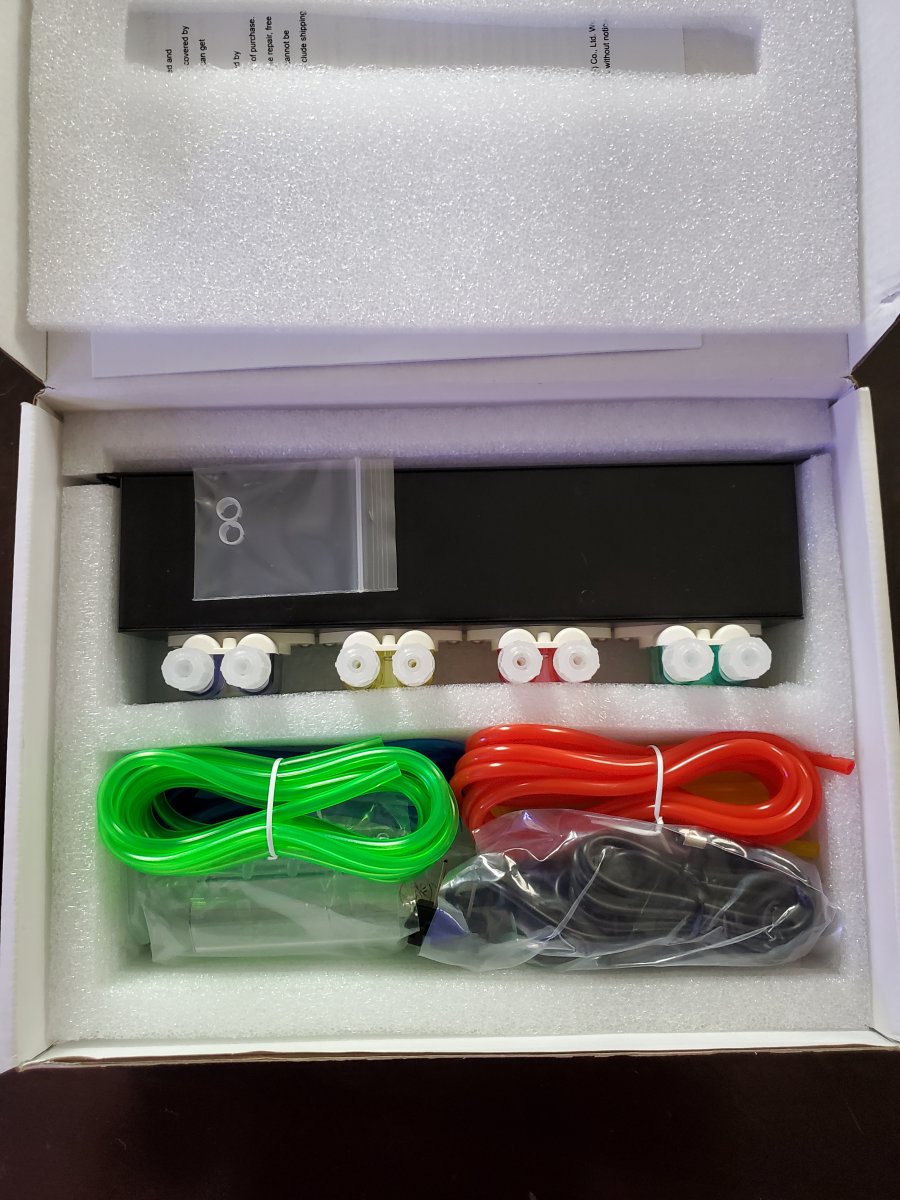 First thing I noticed was how HEAVY this doser was. Soon as you put your hands on it you can tell its quality built. It Doesnt feel cheap and plastic-y like some other dosers. It's also extremely small which makes it nice when it comes to mounting options. It allows you to mount it to a flat surface without sticking out very far and also have the heads oriented vertically. 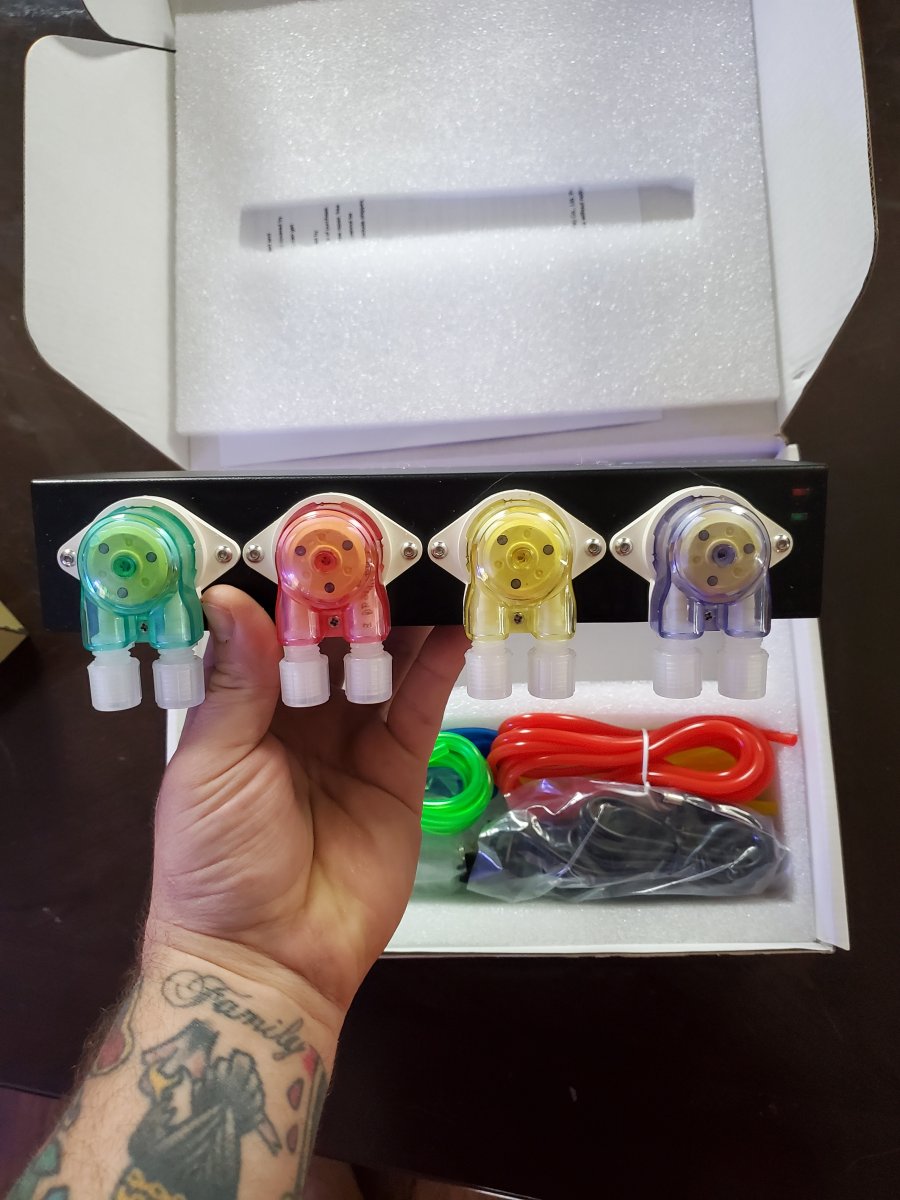 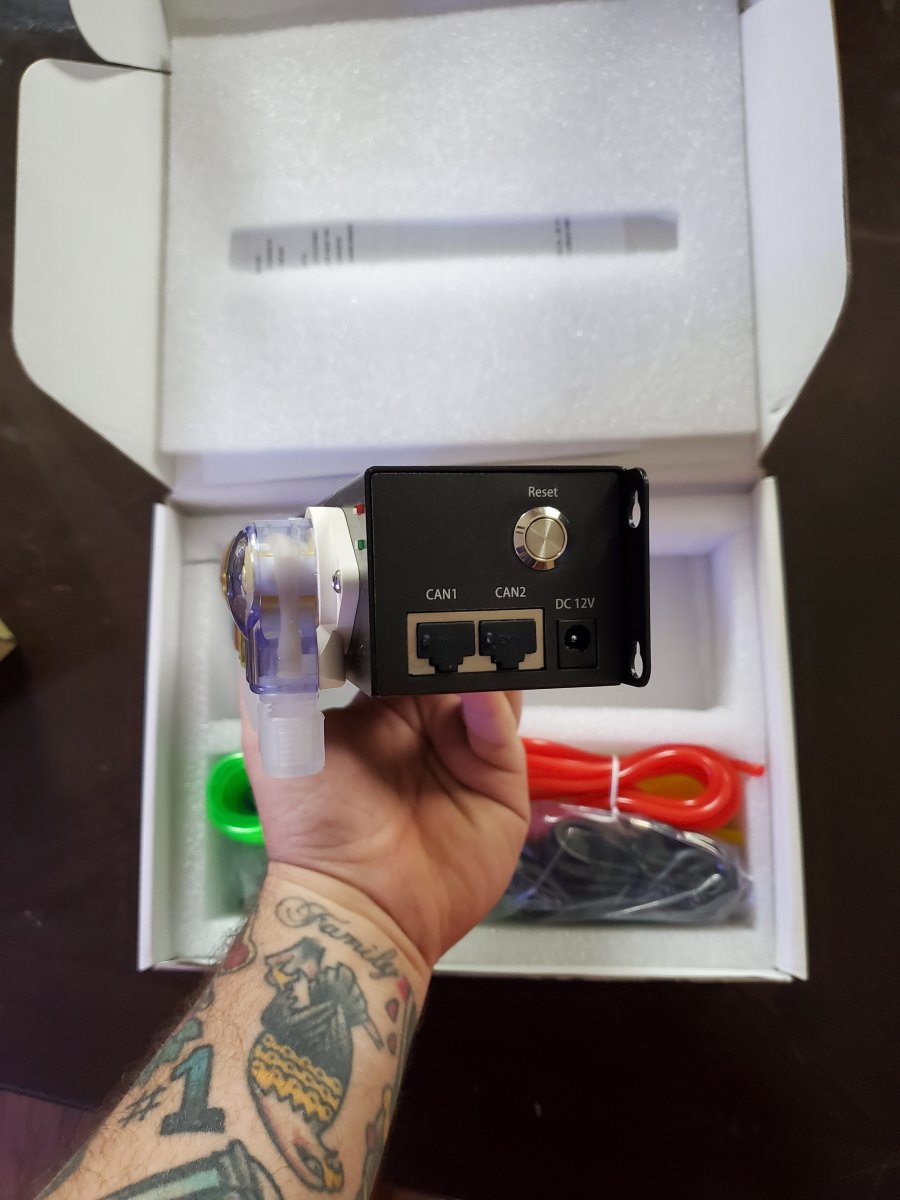 The controls on it are pretty straight forward as it is controlled via the app. It has a power port, a reset button and 2 CAN ports. The front has 2 status LED so at a glance you can make sure everything is ok with it.

Also in the box is a power supply with US plug adapter(product is available in other countries which would have the appropriate plug adapter), a graduated cylinder for calibrating the dosing heads, color coded dosing line that matches each of the dosing heads, and a dosing line holder so you can mount the lines neatly and securely to your tank or sump. They really do include everything you need with this thing right in the box.(besides dosing liquids of course) 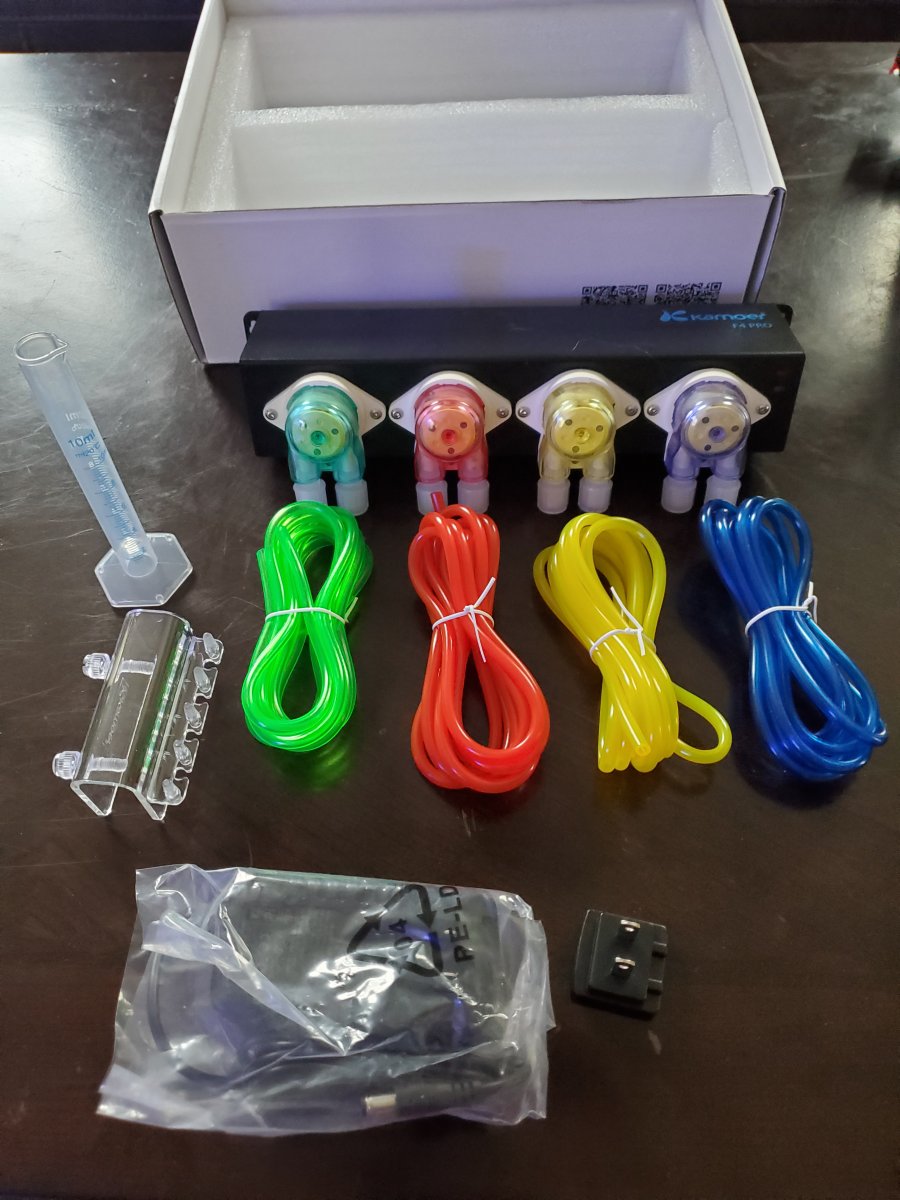 Setup for the doser was an absolute breeze. The doser comes with mounting hardware so it was easy to mount on my control board.

Another really neat feature is the color coded heads and the corresponding color coded dosing lines that come with it. This makes it super easy to follow the lines from doser to sump for any needed maintenance, plus it looks cool which is ALWAYS a fun added benefit the lines connect to the heads with a slip compression fitting similar to an RODI float switch. This makes for an extremely tight and sealed connection which prevents any air from getting sucked into lines which is a known issue on some other dosers. After this it's time to move to the app for the rest of the setup.

Just download the Kamoer Remote app and follow the prompts on the screen. After, select which product you're using from their list, Then It has you hold the reset button to enter wifi searching, then you input your home network and shes online. The system will automatically check for firmware updates and will likely update as soon as its online as kamoer is always perfecting their equipment. IMPORTANT NOTE:like many other devices that connect to wifi, this ONLY works on 2.4Ghz wifi, not 5Ghz so be sure you are connecting to the proper network. Most routers offer both of these options with no other steps needed.

Calibrating the heads was also straight forward with the included graduated cylinder. Just go to the settings screen and calibration, hit start and once it stops enter the amount it dosed into the cylinder. From there it calculates the speed of the head and will be calibrated accordingly. The heads on this thing are extremely accurate. I tested them a good 15-20times per head after calibrating and it dosed the exact same amount every time when testing with manual mode. This is key to achieving system stability.

The app itself is really easy to navigate. Right when you open it lists all connected devices on your profile.

Once you click on one of your devices it brings up a page displaying all your heads, what you've named them, the dosing amount per day as well as the remainder of the fluid you have left. This gives you a quick glance at all the dosing amounts. I REALLY enjoy the "amount left" feature which makes it easy to know exactly how many days you have left until empty. You can set the amount of your container in mL and it automatically calculates time left. For me, I chose to enter an amount just smaller than my container so that when it reads "empty" I still have a bit of time to have replacement ordered and installed before I truly go empty. For example, if my dosing container is 1500ml I would set it to 1250ml so that I have time to replace it before running out. This is a really great feature.

Adding dosing schedules was really straight forward. You make a schedule time for it to dose in. For me I just chose 1 schedule all day, but if you wanted you could have seperate schedules for morning, day, night or any other time periods you wish so that you can dose different amounts at different times of day based on consumption or any other variables. You can also have it skip days if you like if dosing of something needs to be more spread out.

After making a schedule you make a dosing plan. It can dose up to 24 times a day per head, so I chose 24 times and then entered my total daily amount to be dosed. The app automatically breaks that down per dose and does all the calculations and programming from there which is a great thing. I chose 24 times a day for alkalinity and calcium so that I can create theoretically the most stable environment and mimic the stability offered with a calcium reactor by having it dose small amounts throughout the entire day.

A certainly notable feature that many might not think of is the included anti chemical interference options that it offers. This allows you to enter a time you want the pump to dose within the hour as to not dose two liquids at once, this would prevent precipitation in the example of calcium and alkalinity. Shown here I have the anti chemical interference for alkalinity set to 30 minutes, which causes the alk to dose on the half hour, every hour. I have the interference setting for calcium set at 1 minute so it doses at 1 minute past the hour, every hour. This ensures all chemicals get to be fully dispersed in the water before anything else is added.

With the doser being wifi, it also is able to be accessed from anywhere in the world. This is really neat for if you are away from home and want to take a peak or even if have an alkalinity monitor like an alktronic,KHG, or neptune trident this would allow you to adjust dosing when not at home, or while away for work or on vacation. It also is dead accurate on time of dosing because its connected to internet. I checked it at a few internals and it dosed right on time, everytime. A final notable subject is that the warranty is handled through CoralVue so you already know you're getting top notch service if there is ever the need. The possibilities this thing offers is seemingly endless.

Here is the doser installed. 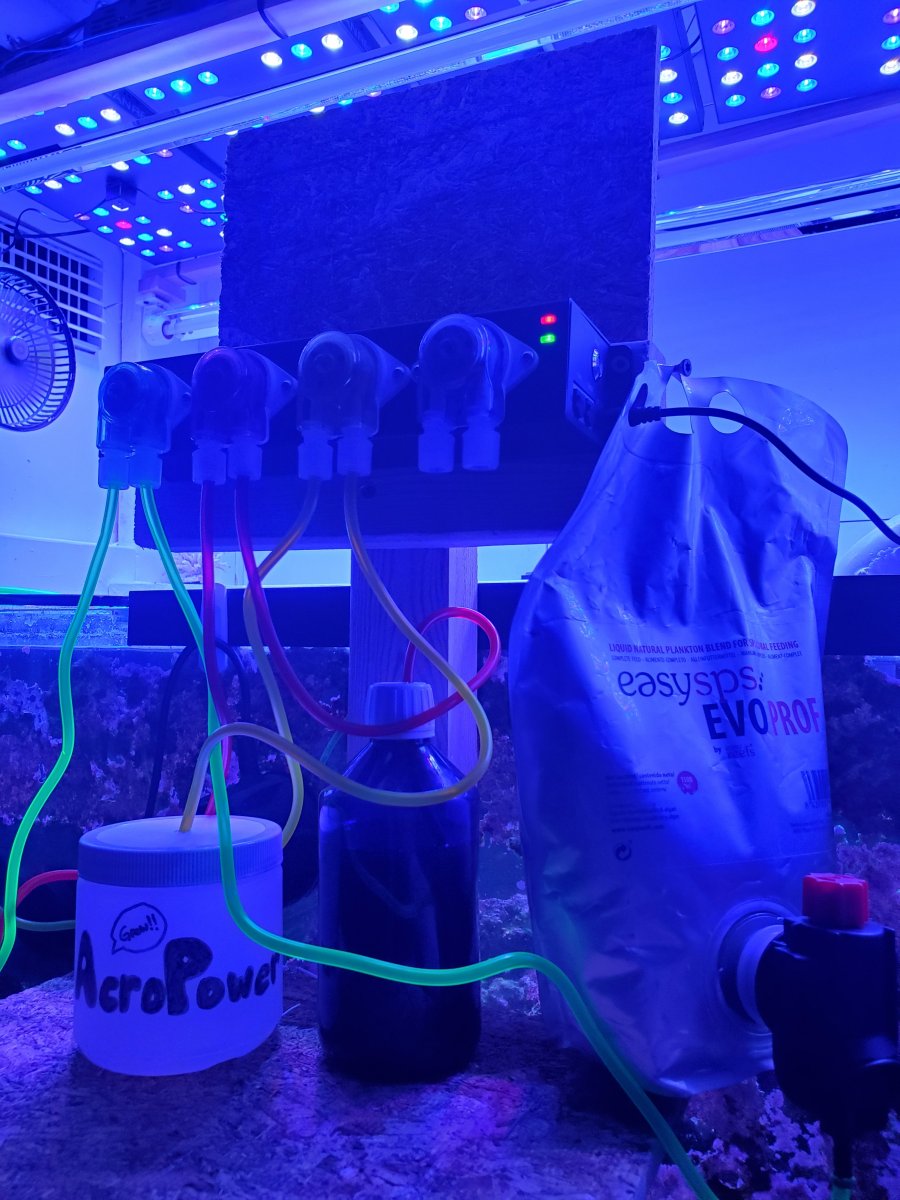 I am using this doser for 2 part dosing as well as dosing liquid coral foods. This will give me opportunity to review its operation with a variety of liquids.

I really look forward to this thing as it has already impressed me right out of the box. The construction of it makes me feel very good about its quality, and the app is very user friendly.

I will update the thread as time goes on, but does anyone else have this doser or interested in it? It really is worth every penny and I suggest anyone that is considering this piece of equipment, just do your self the favor and order. You wont be disappointed.
Last edited: Mar 23, 2020

Great review. I have been using the regular F4 for some time. The app I'm using seems to be more crude then what you're using, but I will say that after calibration it's been rock solid.

Awesome review definitely want one for myself!
OP

andrewkw said:
Great review. I have been using the regular F4 for some time. The app I'm using seems to be more crude then what you're using, but I will say that after calibration it's been rock solid.
Click to expand...

All of the kamoer products that I have used have been quality. This app was a breeze to use and the auto calculations for dosing that it does is really nice. Can set really big detailed dosing schedules with just a few clicks as it takes care of the rest.

I'm also using their paristaltic pump and I'm interested to try the new single head wifi doser that is coming out soon.

@Mshort03 - excellent review! Thank you for taking the time to put together this thorough, high-quality, and helpful information. I have already been looking the #Kamoer F4 doser and I'm sure this will be helpful when I get it. Thanks!
OP

Peace River said:
@Mshort03 - excellent review! Thank you for taking the time to put together this thorough, high-quality, and helpful information. I have already been looking the #Kamoer F4 doser and I'm sure this will be helpful when I get it. Thanks!
Click to expand...

Thank you! Just doing my part to share some helpful information about a great product. You wont be disappointed with it! Hopefully this can help some others decide to make the purchase too if they were hesitant before hand as well.