Hello figured I would make a thread here and get some opinions on what to do with my 2 Yellow Tangs. I've had them for close to a year now and I originally had them in a 210. I broke the 210 down because I ordered a red sea S1000, the tangs have always been buttholes and the bigger of the 2 would chase other fish including my large naso but it wasn't to out of control. Since breaking that tank down I moved them to a 5ft red sea 525xl for that last month. The S1000 is now setup and running and will be moving the fish over in about a week once i get screen tops built but I'm actually contemplating ditching the yellow tangs. They constantly harass the other tangs, the big one is the worst but now the smaller one is starting to become a bully. I've set a mirror up in the corner for the last couple days trying to get them to mellow out but so far not much has changed except the naso, foxface, and sailfin are riled up at the mirror too.

So my thought was either ditch them or try to add another one or 2 to make their numbers larger in hopes they would calm down. That's if i can find a couple. Or a couple purples, but i've always heard they are meaner than yellow but i'm not so sure about my yellows. I'm sure the move back to a bigger tank with alot more rockwork will kind of calm it down a little, but in the back of my mind i'm not so sure and dont want to have to try to wrangle them out of the s1000 once in.

I will be adding a whitetail bristletooth to the 1000 when I move everyone over, atleast thats the hope. 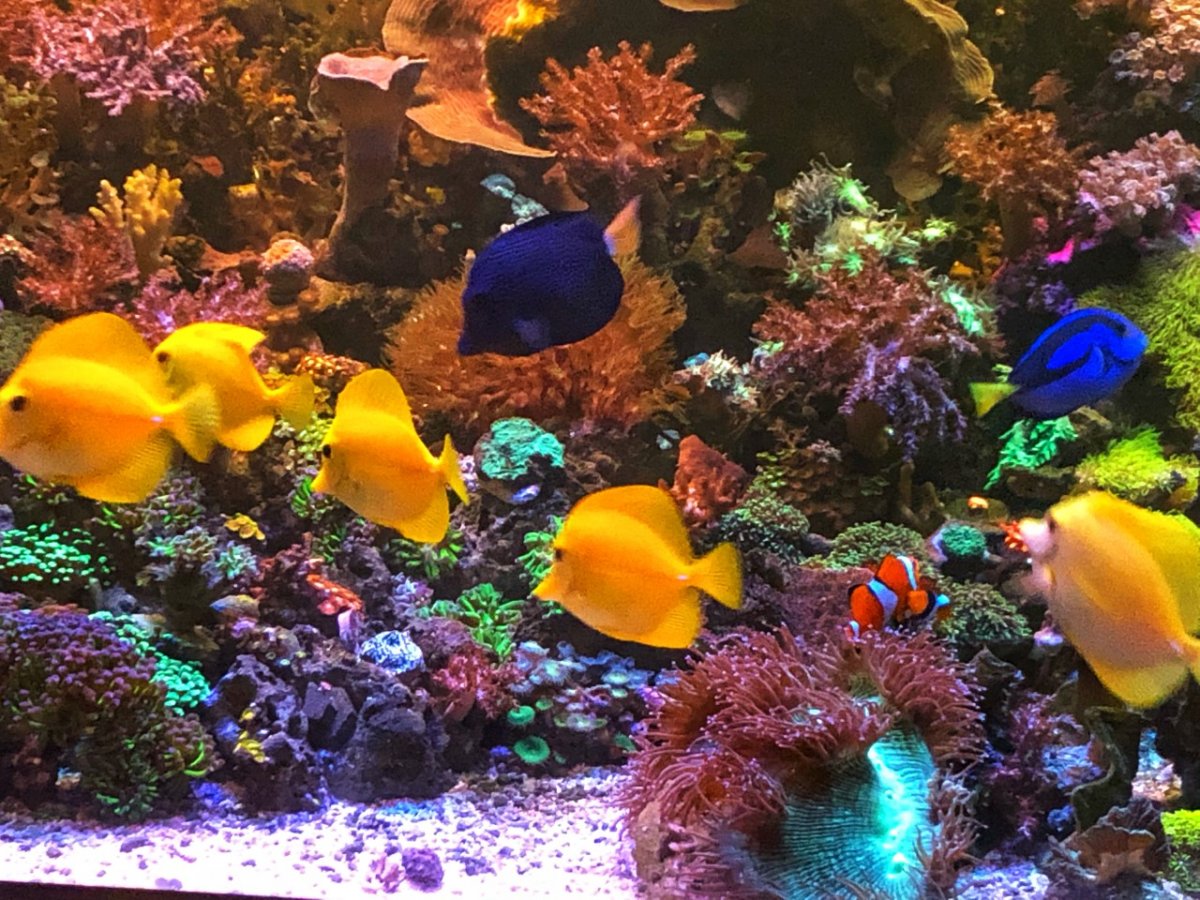 Why not separate the 2 yellows? Sell/trade the larger yellow tang. And add your new tangs at the same time the remaining yellow goes into the new tank. The remaining yellow will have a new environment and some new tank mates. That should alter his aggression a bit, as a new hierarchy is created.

Well i figured with the sailfin and 2 yellows that would be the odd number, didn't think they would tell if he was a yellow or not.

They are good algae cleaners so I'd like to keep more than one if possible. But not sure if adding a single purple or even another yellow would throw off the numbers enough to lower some aggression. And then also the tank move would hopefully break up the hierarchy. I wish the naso would just put them in their place but he's for the most part a gently giant.. He will puff up to them once in a while but never actually puts them in their place.
D

i agree with vette, they do best with larger numbers and keep more to themselves in a shoal. I say buy 3-5 more and have a nice looking mini school. Though if i had a tank that large i would probably add about 50 trying out a small school of 11 or so vanderbilt chromis (can kill each other off in small tanks but larger tanks not so sure, im a vanderbilt u grad and so are both of my brothers so biased with that one) or longspine cardinalfish
D

add 3-5 all at once, the aggression should be evenly split to mitigate danger

since yellows are impossible to get right now would purples be to supplement?
D

no they will fight them to death, maybe if you got 5 purples to spread out aggression but that is about the same price as biota yellow tangs (and i honestly didnt even qt my biota one as i didnt really see a point, probably should do a small monitoring tank but didnt have space and i trust biota)