I have been working on building the equipment rack for the secondary sump which is now complete. I now have a 10' shelf and mounting wall for additional equipment. A second layer of pond liner was added to the bottom of the tank with a few tiles to hold it down. The interconnect line in the sump was extended to ensure the sump water is circulating without making a giant dead spot. polycarbonate tops were cut out and I have mixed salt into the secondary sump. Just need to wait a few more days until the sump is ready to go online with the rest of the system. 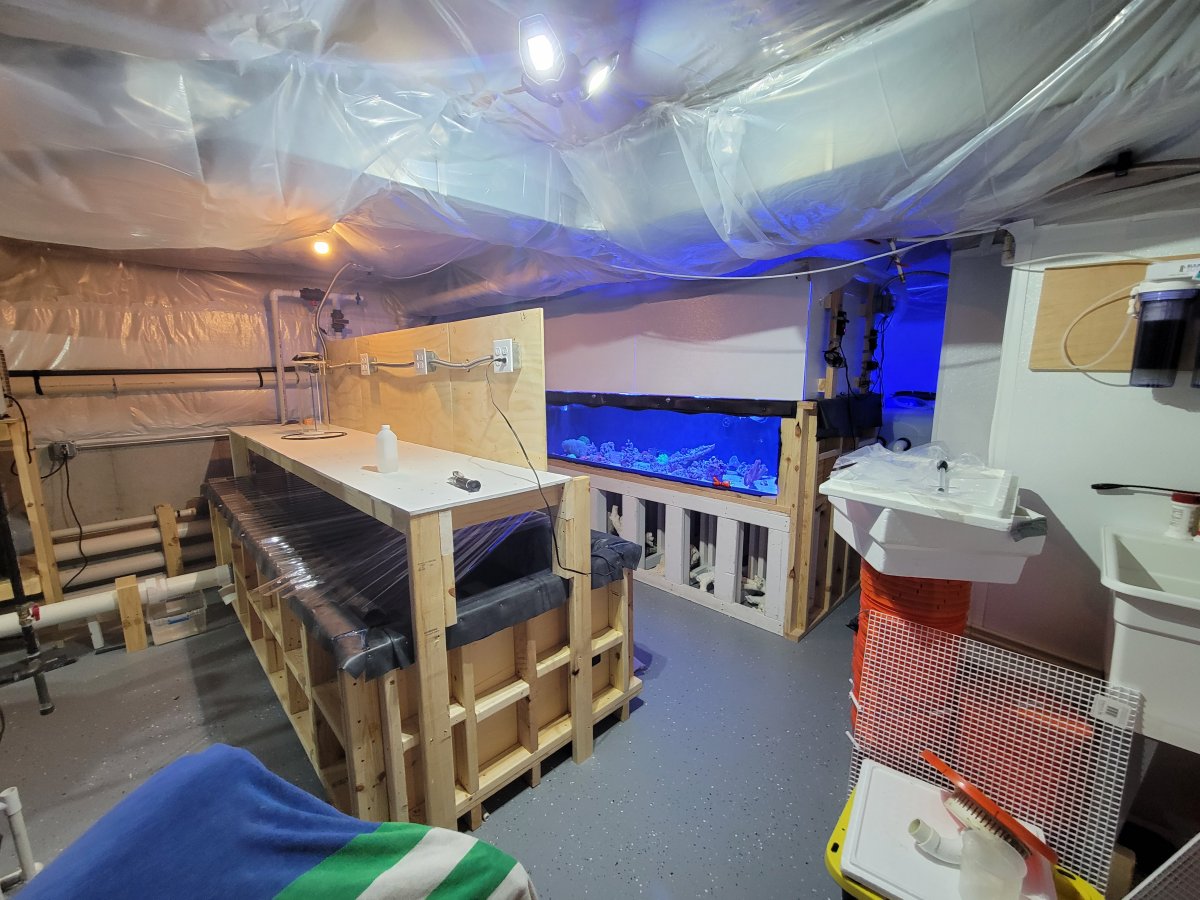 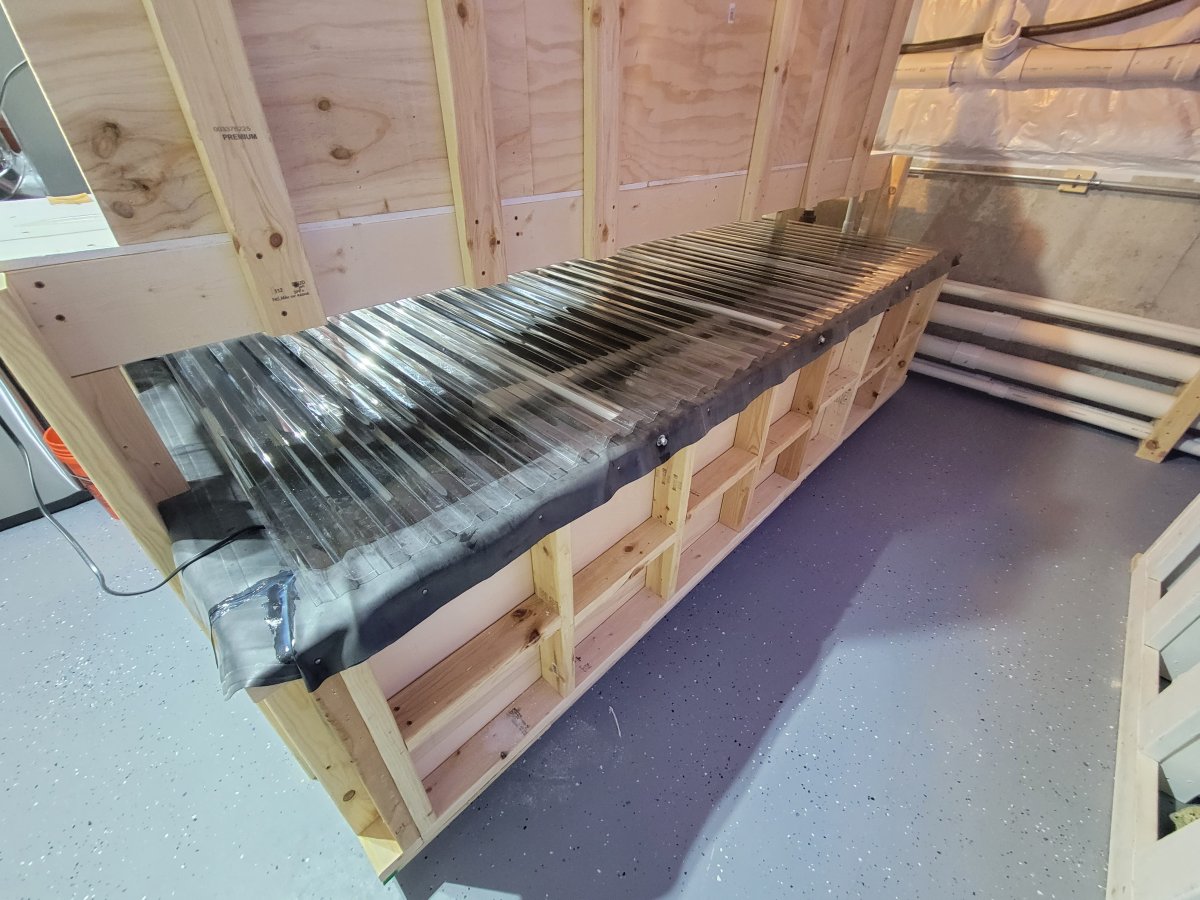 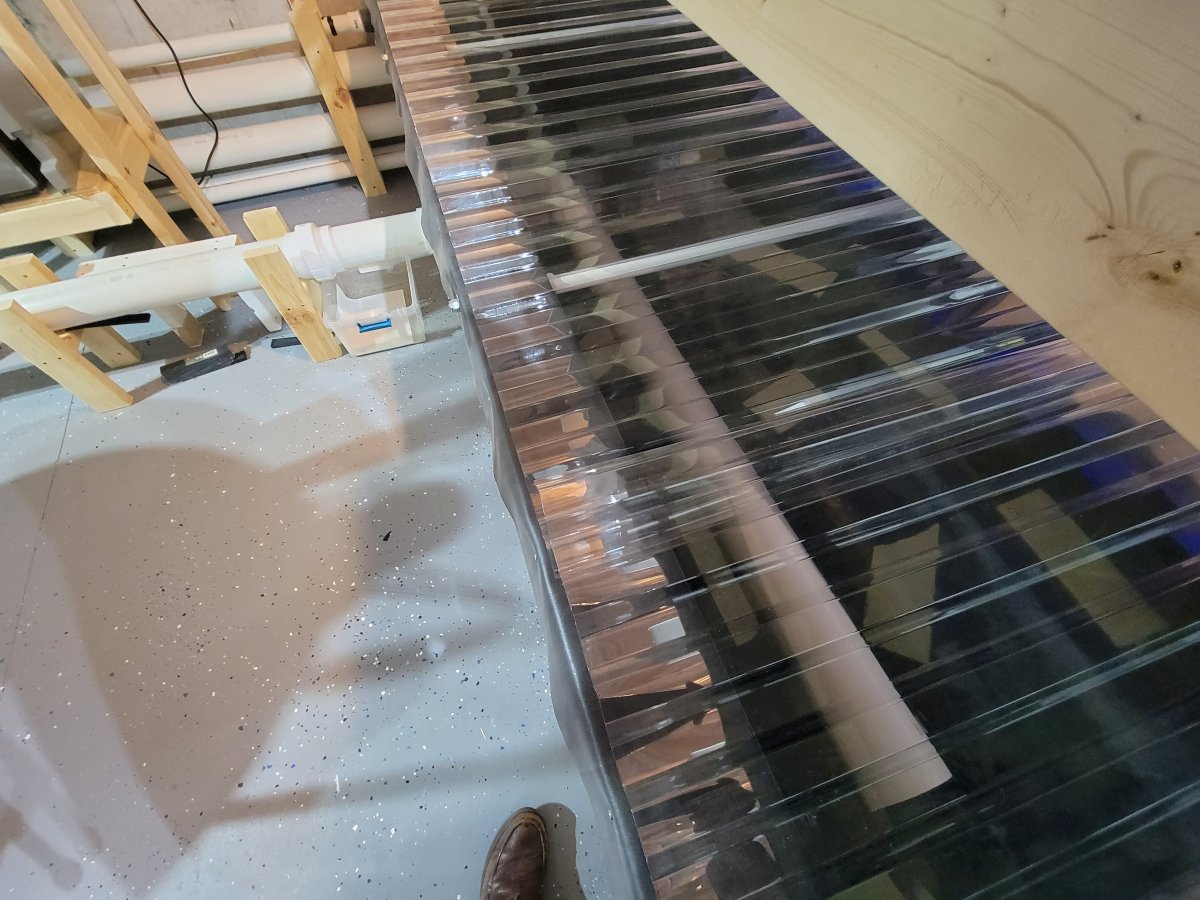 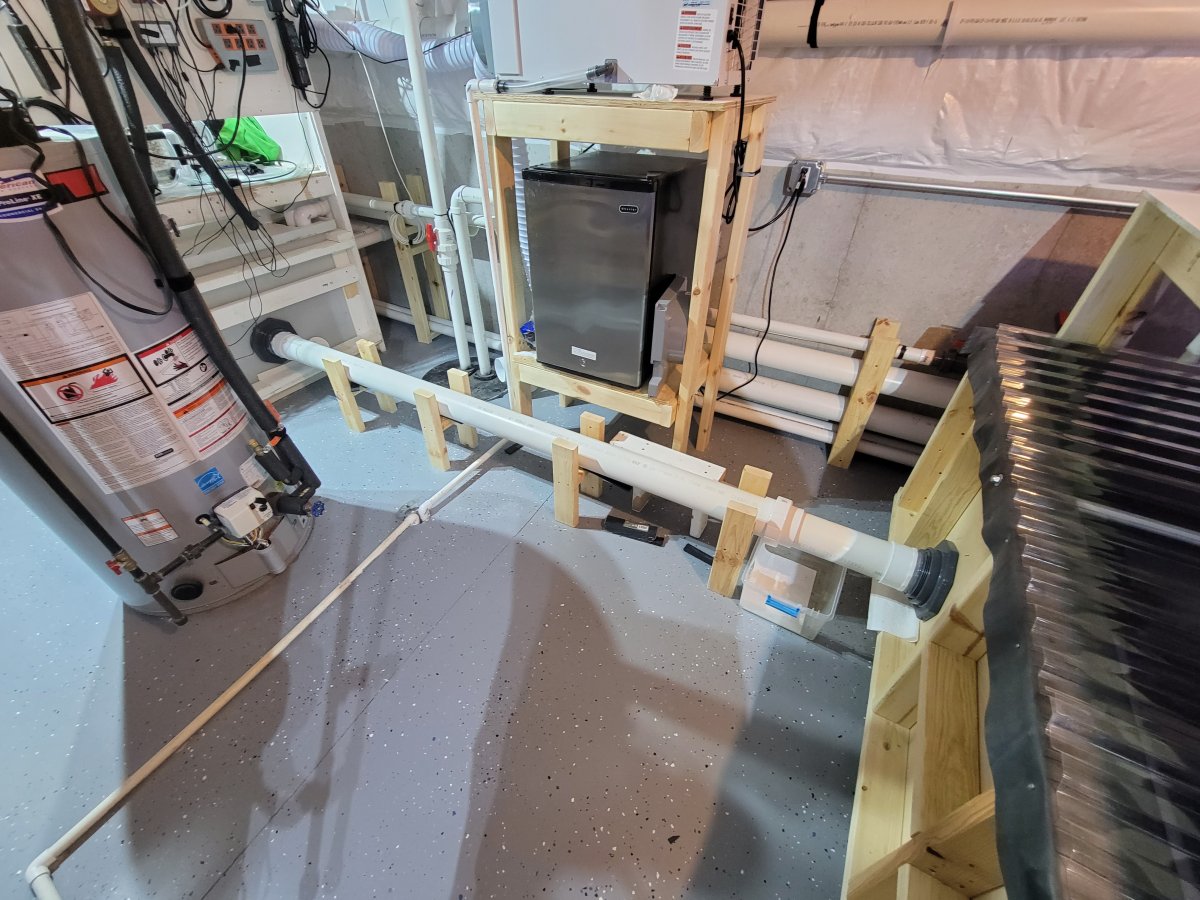 And again how big is that display going to be ?
OP

mehaffydr said:
And again how big is that display going to be ?
Click to expand...

mehaffydr said:
And again how big is that display going to be ?
Click to expand...

At least we know the height now!

We got one dimension I wonder if we ask every day will we get one per day? That's only 3 days to get the details.
Seriously Alex love this new setup and I'm super happy for you that everything is going so smooth.
OP

mehaffydr said:
We got one dimension I wonder if we ask every day will we get one per day? That's only 3 days to get the details.
Seriously Alex love this new setup and I'm super happy for you that everything is going so smooth.
Click to expand...

Don't worry in less than 7 days based on planet Venus time I will likely reveal all the dimensions of the main display.

I did get some work done tonight on my counter for the utility sink. 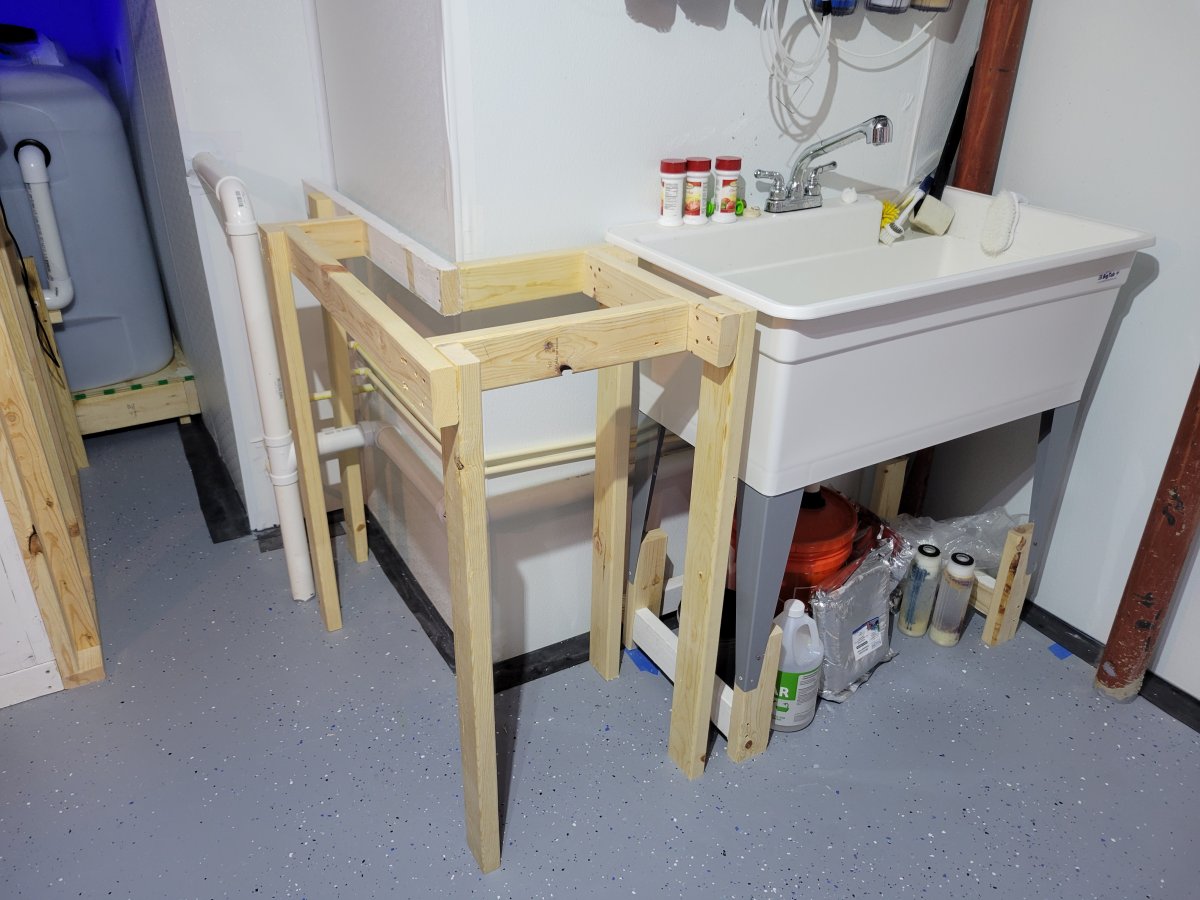 I have completed the workstation for the utility sink with a PVC top with drain channels going back to the sink. I also made a little drying rack up with PVC parts. 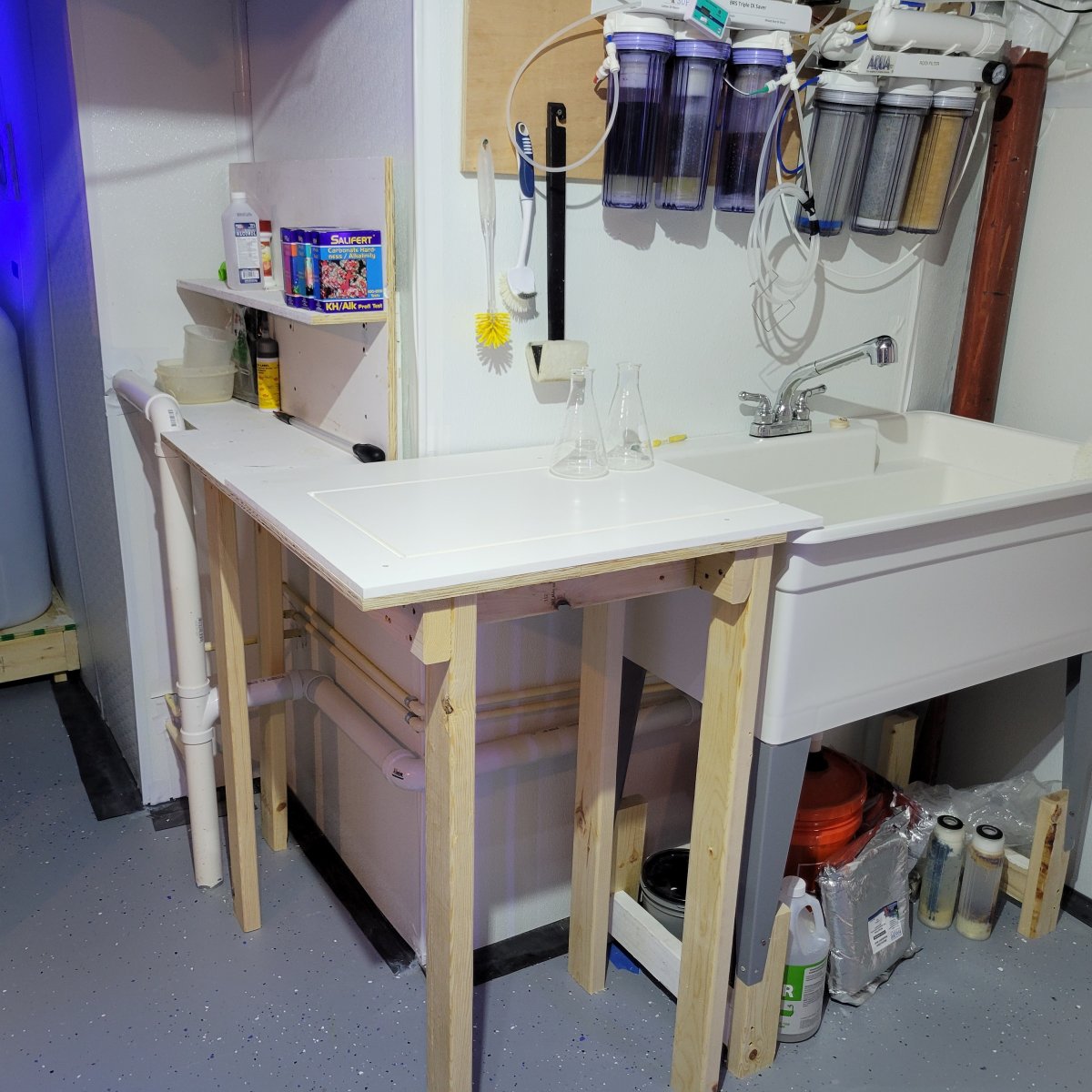 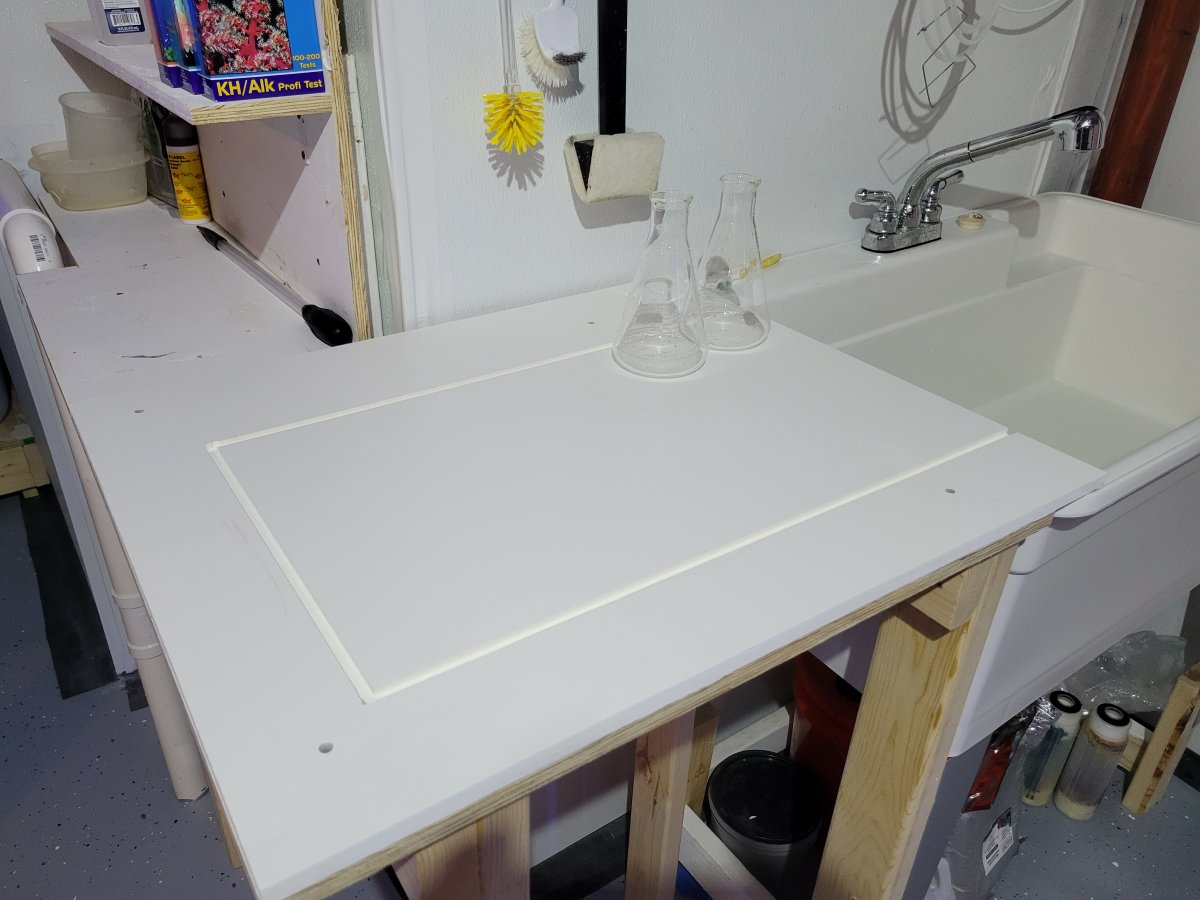 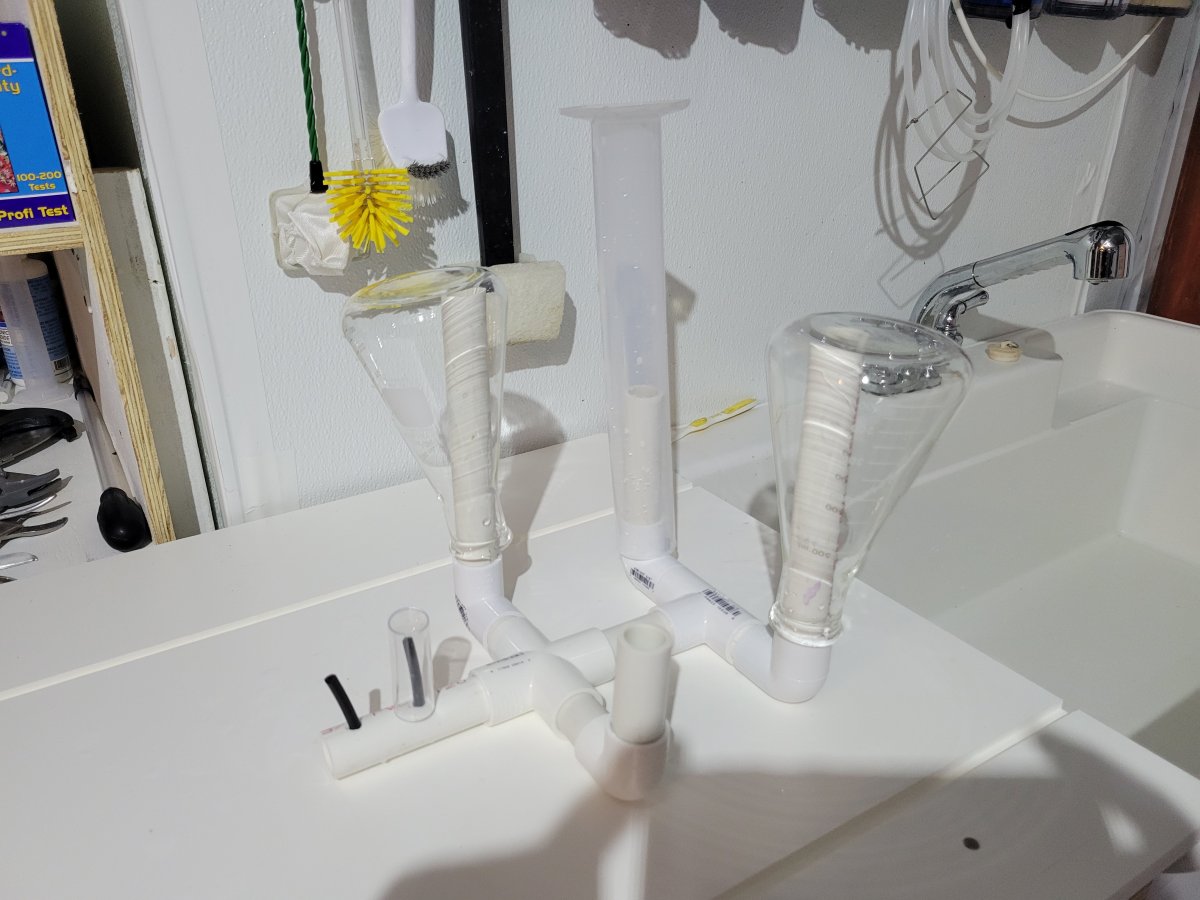 mehaffydr said:
Alex that top with the grooves is awesome I sure might have to steal that idea as long as you didn’t apply for a patent on that
Click to expand...

Go ahead and use it. I know I am not the first to do it. Just wanted to make sure that excess water on the top has a path back to the sink. The PVC sheet was a perfect choice over the plywood underneath an makes it just high enough for the PVC to over hang the sink edge. Now the question is can I keep it clean and free of clutter.

Don't worry in less than 7 days based on planet Venus time I will likely reveal all the dimensions of the main display.

I did get some work done tonight on my counter for the utility sink.

Forgot to mention the secondary sumpnis now 100% online. The 4" interconnect is working just as planned along with the 4" pipe extension into the sump to eliminate dead spots.

The total water volume of the system is now at 2100 gallons . Time to start thinking about the display. 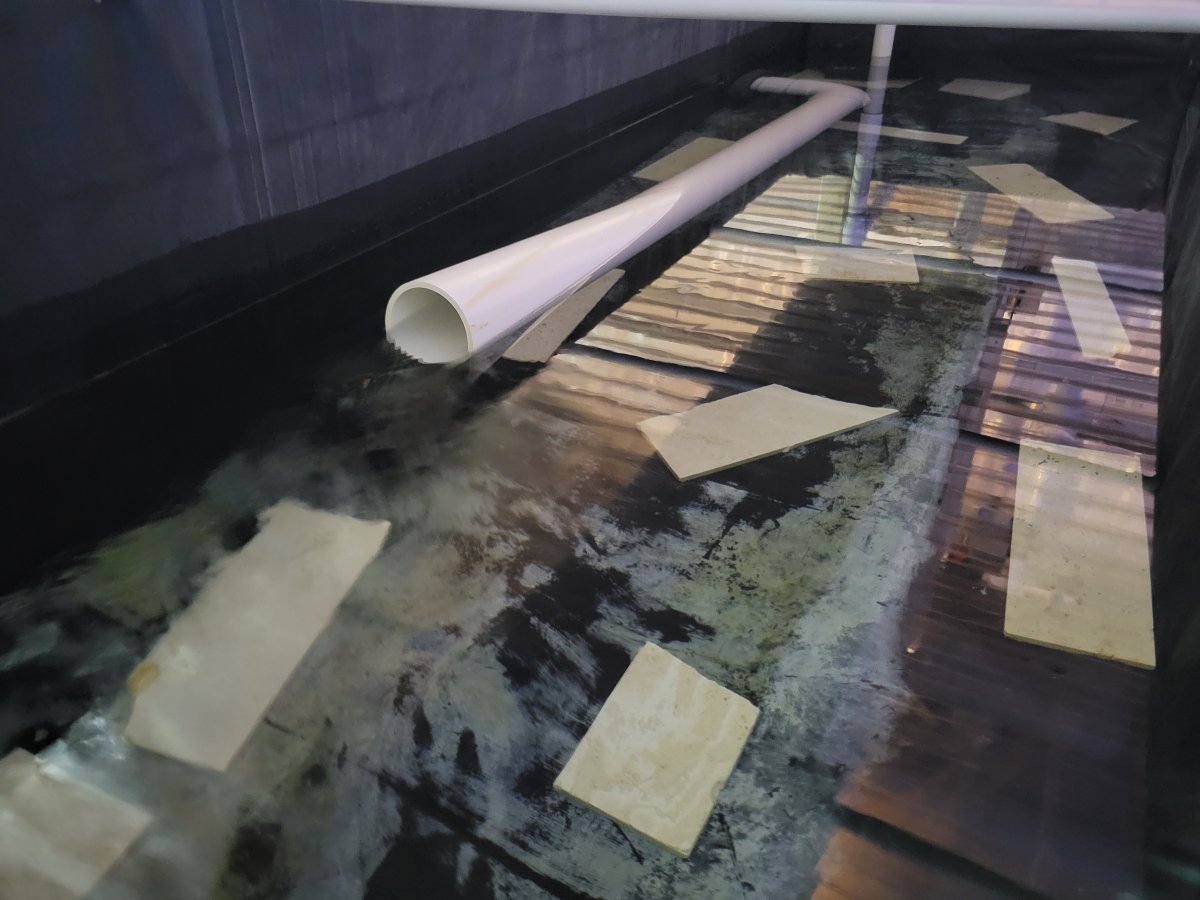 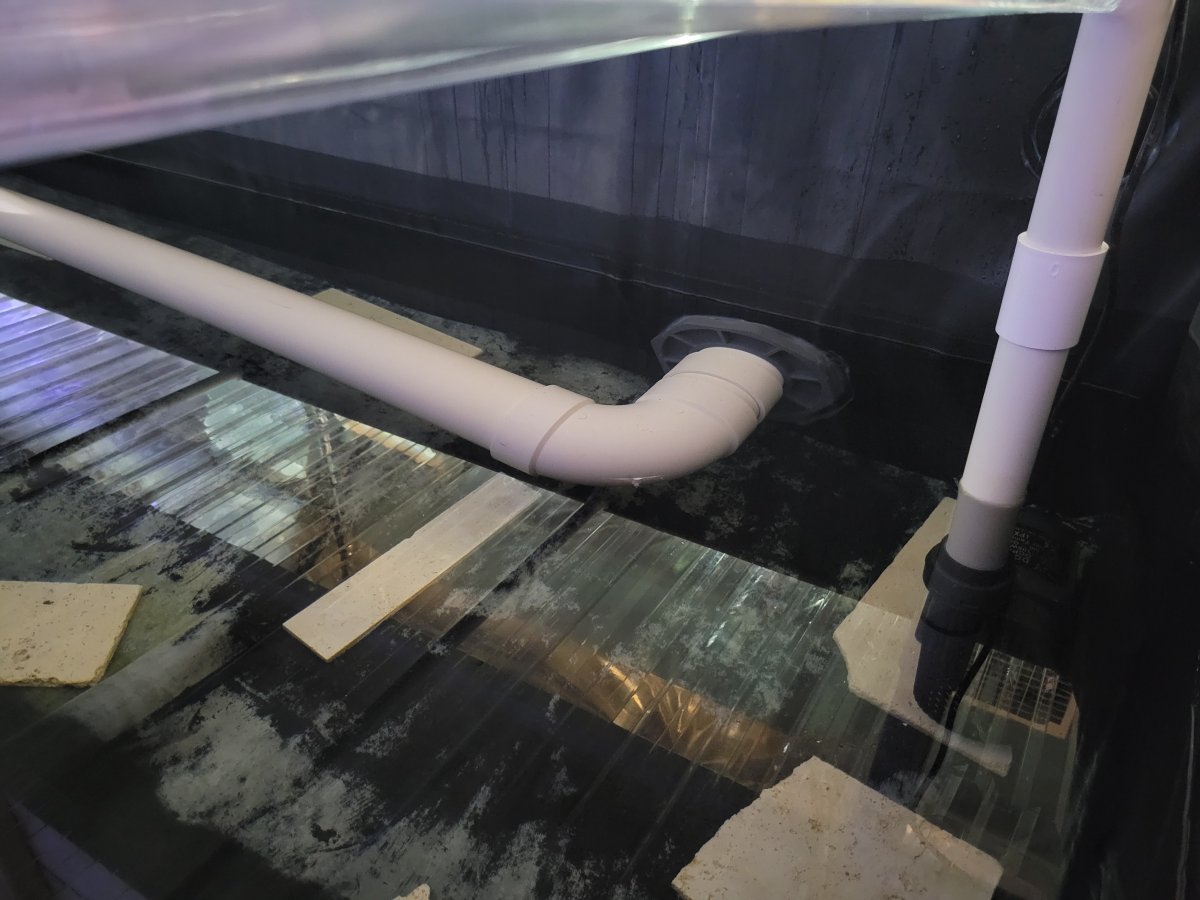 mehaffydr said:
Alex just so you know we have been thinking about the display since December
Click to expand...

I envy you I have been thinking about the display since last June when I bought my new house.

mehaffydr said:
Alex just so you know we have been thinking about the display since December
Click to expand...

I know you can do it, so just go and build it for him and then you will know what size it will be!
OP

Some final touches on the fish room have been completed. I did some cable management for my apex and other cords on that mounting board to make it look a little nicer. I also went ahead and put a PVC top onto one of my old aquarium stands that will be a work bench/microscope station which looks way better now than partially painted plywood. I have also gone down the road of starting to use kalkwasser which is something I have never properly used before. I picked up an avast marine K2 stirrer and had a bubble magnus dosing pump already on hand for the setup. I have the dosing pump plugged into the apex with the pH probe setup as the controller. I am looking to start playing the pH game and I will see how well I can do at trying to raise the pH up to the 8.2-8.4 range. The pH was trending low at 7.88-7.91 without anything. With my alk at 9.6 I wanted to start really slow so it could continue a downward trend so when the kalk was started up the pH rose up to 7.91-7.98 but that's only dosing 50ml 4x/day ( Current total system volume is ~2100 gallons). I noticed after a few days the pH started trending down again so I tested alk and it dropped to 9.3 so I have increased the kalk dose to 50ml 6x/day which is slowly raising the pH back up again as its hovering at 7.96 at the moment before most of the system lights kick on.

@AVAST Marine
I considered making my own kalk stirrer but once I decided the way I wanted to make it would almost be the same cost as buying one which is why I picked up the K2 from avast marine. So far I am happy with how this stirrer operates as its a simple gravity feed and the stirring motor is low wattage and continuous duty. I prefer the stir bar style as I am not a fan of using a magnetic stirrer for kalk. I also liked the fact that if I need replacement parts there is a full list available online for reasonable prices. There was one little issue I was annoyed at and that was the gravity drain fitting that's glued at the top of the stirrer had a leak and was dripping when the filled to capacity between dosing cycles. I took care of the drip issue with some silicone and it is working just fine now without leaking. Beyond this minor issue I have been happy with its performance and I am looking forward to seeing how it performs long-term for my system.

I also have some new additions to the system I want to mention. My LFS Reef Plus called me up because they were doing a tank teardown for a client and wanted to know if I was interested in some corals and a fish. I was sent a couple of pictures and then asked what kind of rock is in the tank? I heard back it was tonga branch. The next day I went down to the LFS and made a deal for a big green bubble coral (one thats bright green in the picture), and giant colt coral along with over 150lbs of tonga branch and pukani rock. A couple days later the LFS owner came by the house and dropped off a beautiful regal angel that was in their clients tank. Its been just over a week since I added the corals and fish and everyone is doing great. The only slight downside was some aiptasia and manjanos on the rocks but I have already gone through and nuked a bunch of them with F-aiptasia.

Also I have got one funky looking Asterina star running around in the refugium that just will not split and I had to take a picture since its been this way for over a week now.

I have run out of stuff to do in the fish room and I will be starting to work on the main display tank sometime this week starting with the tank stand. 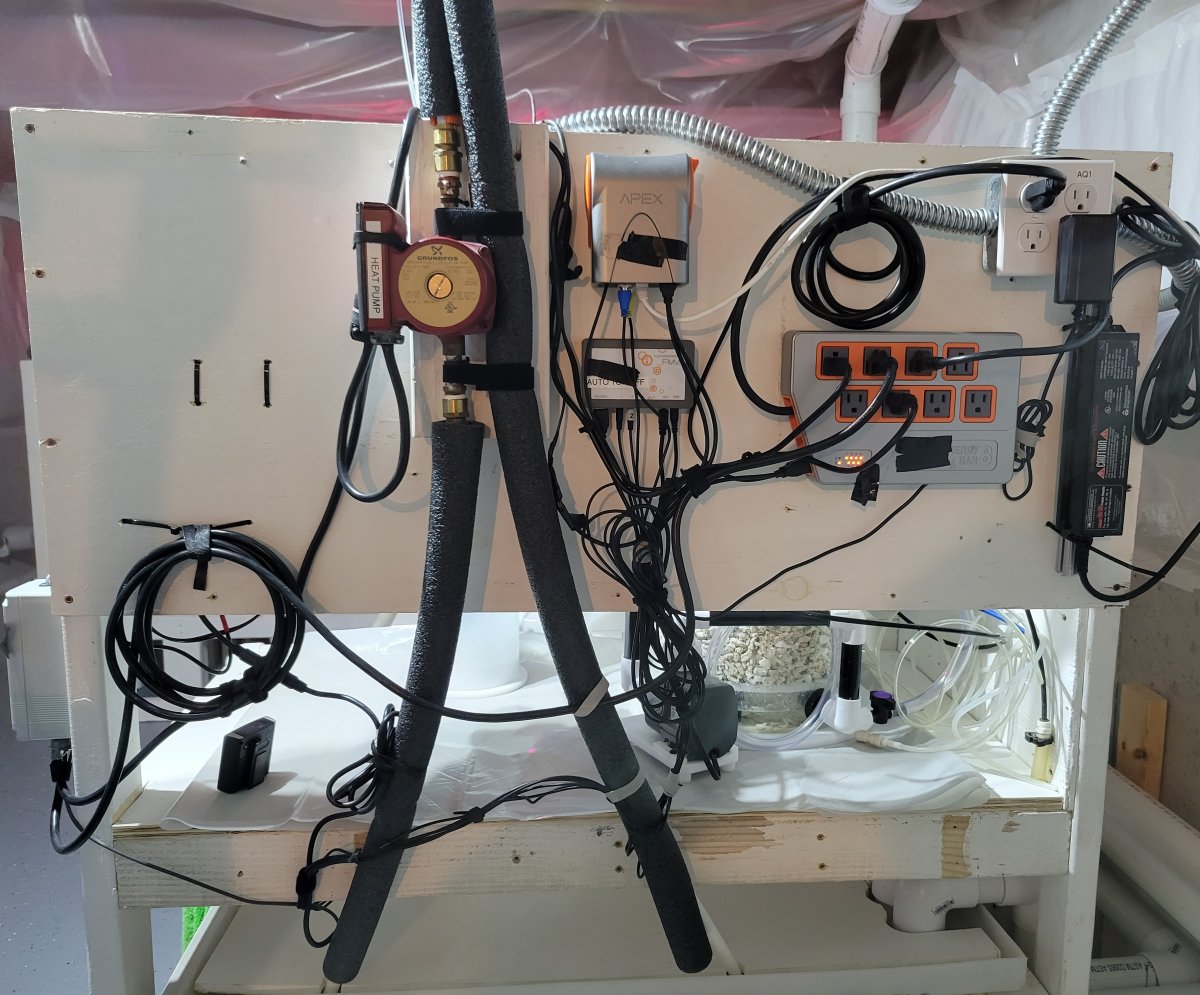 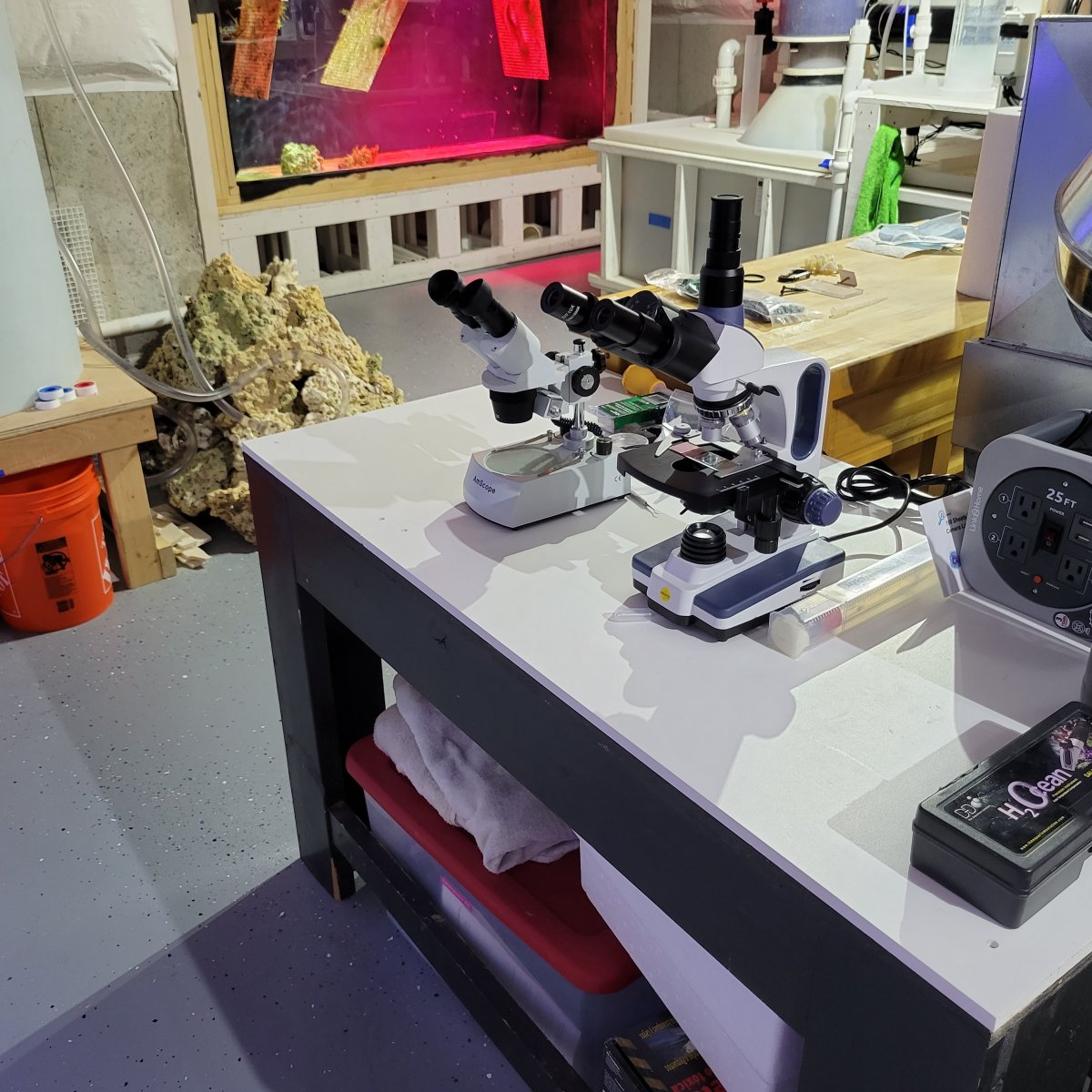 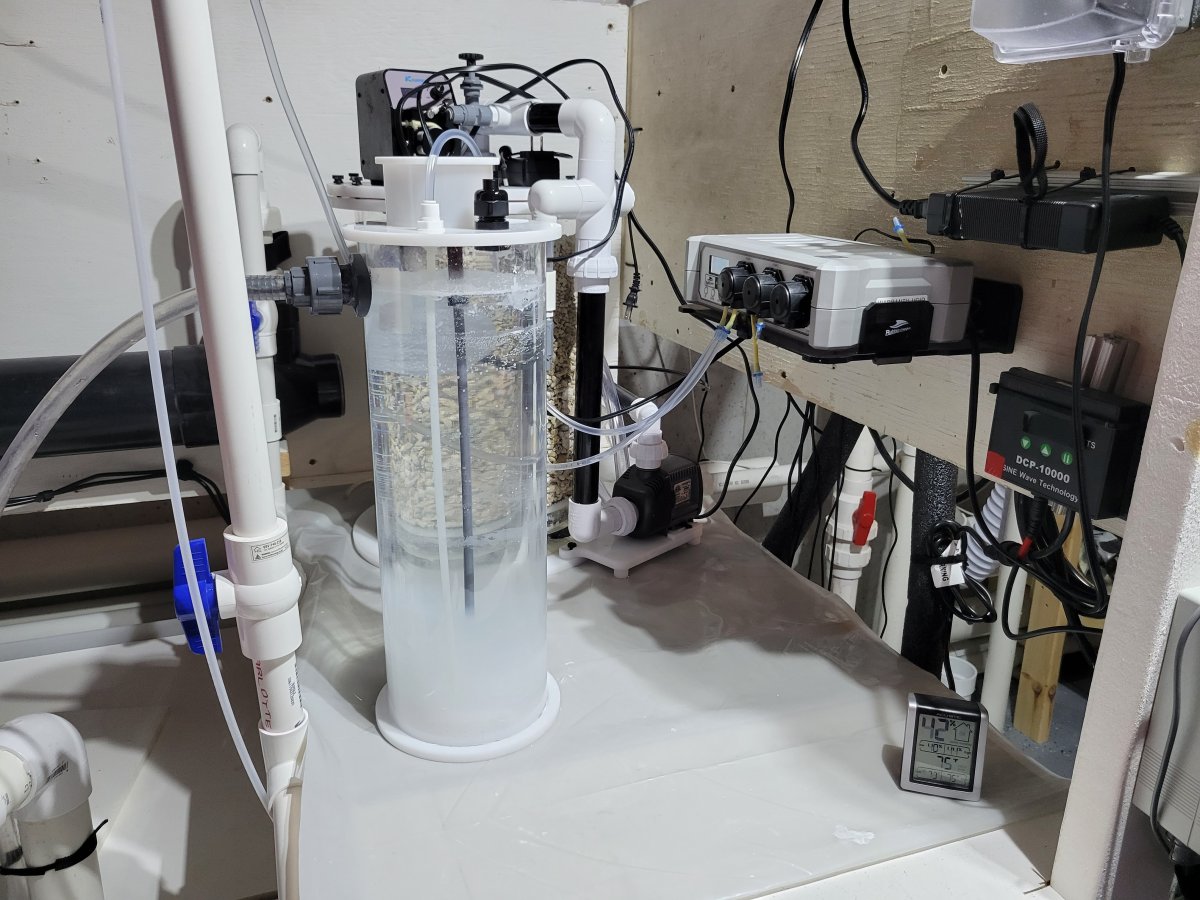 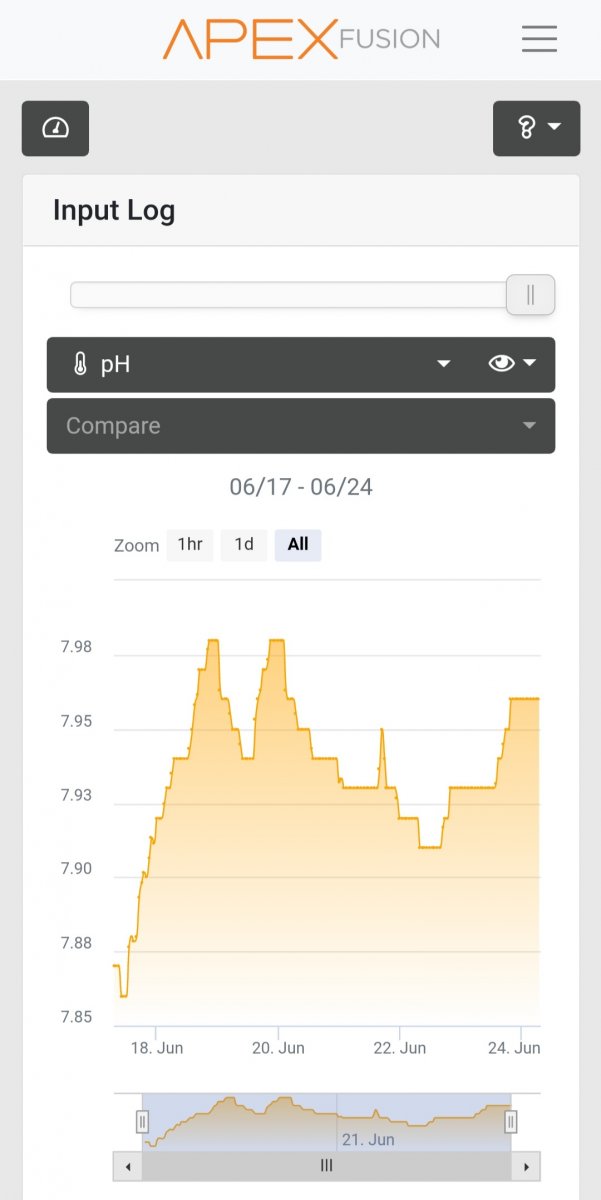 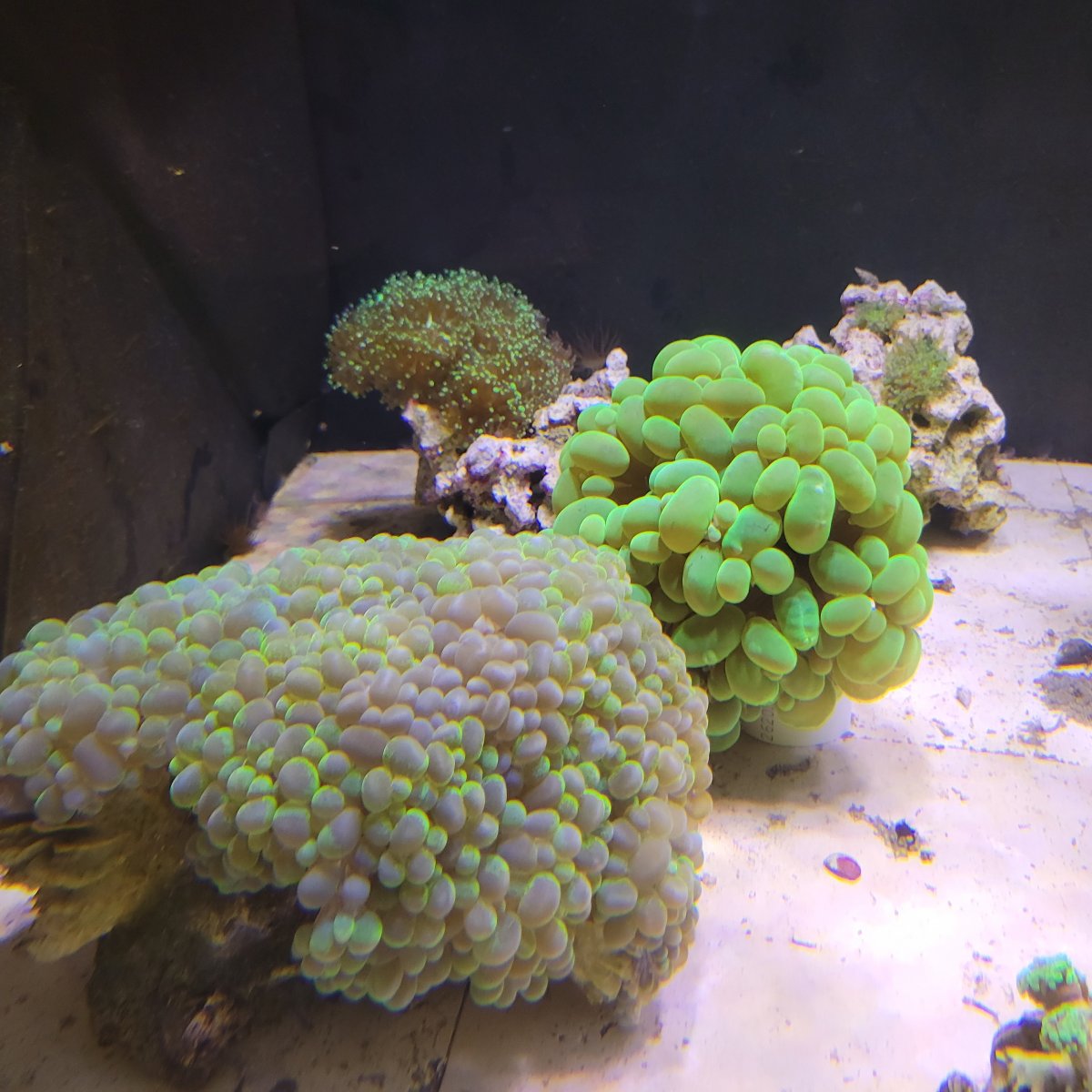 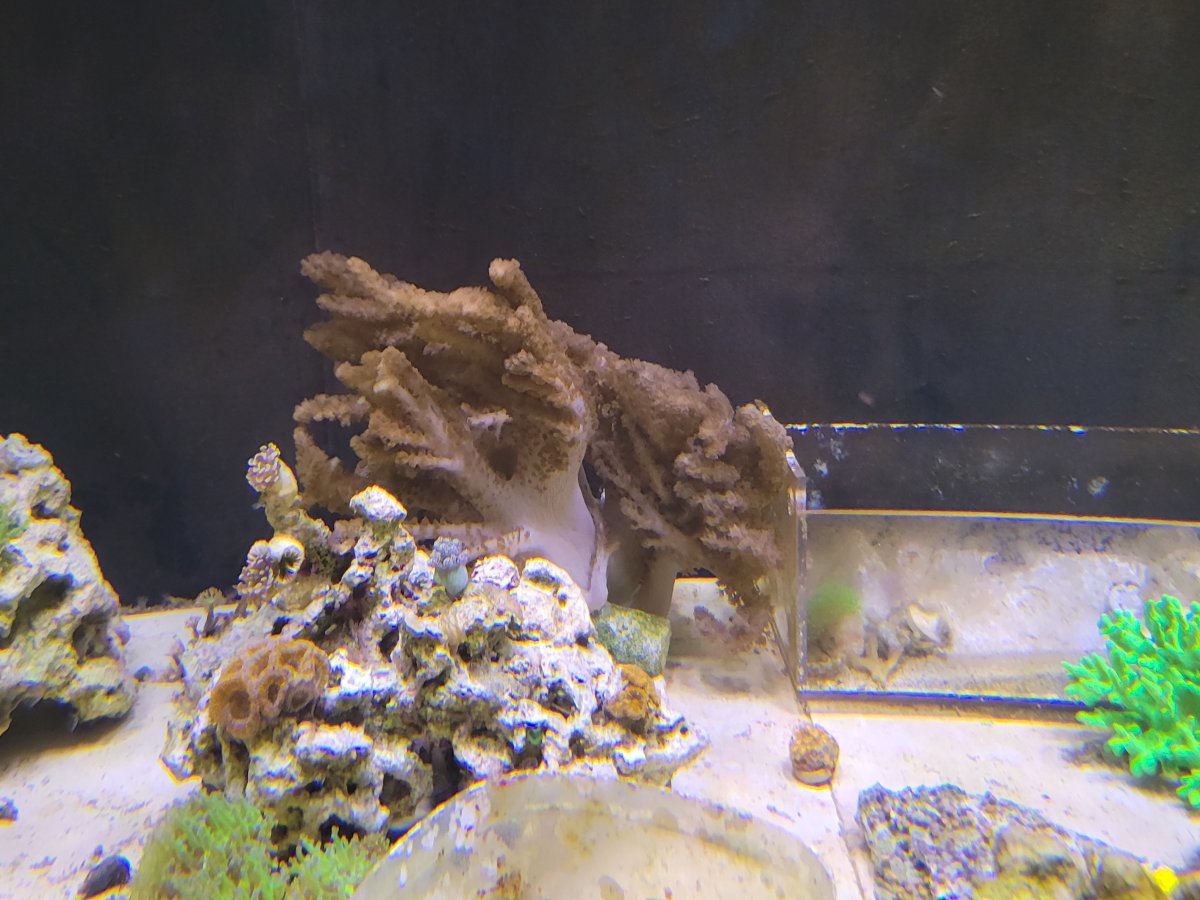 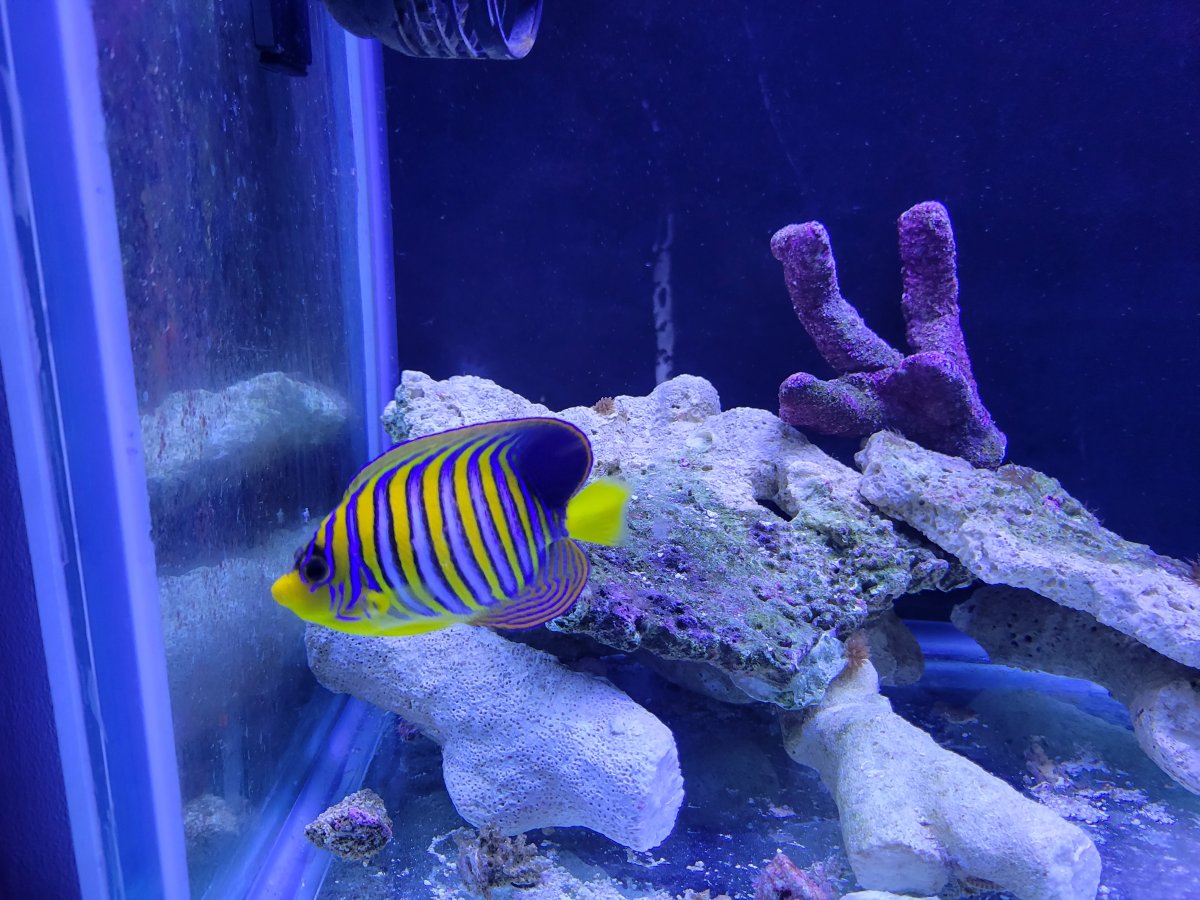 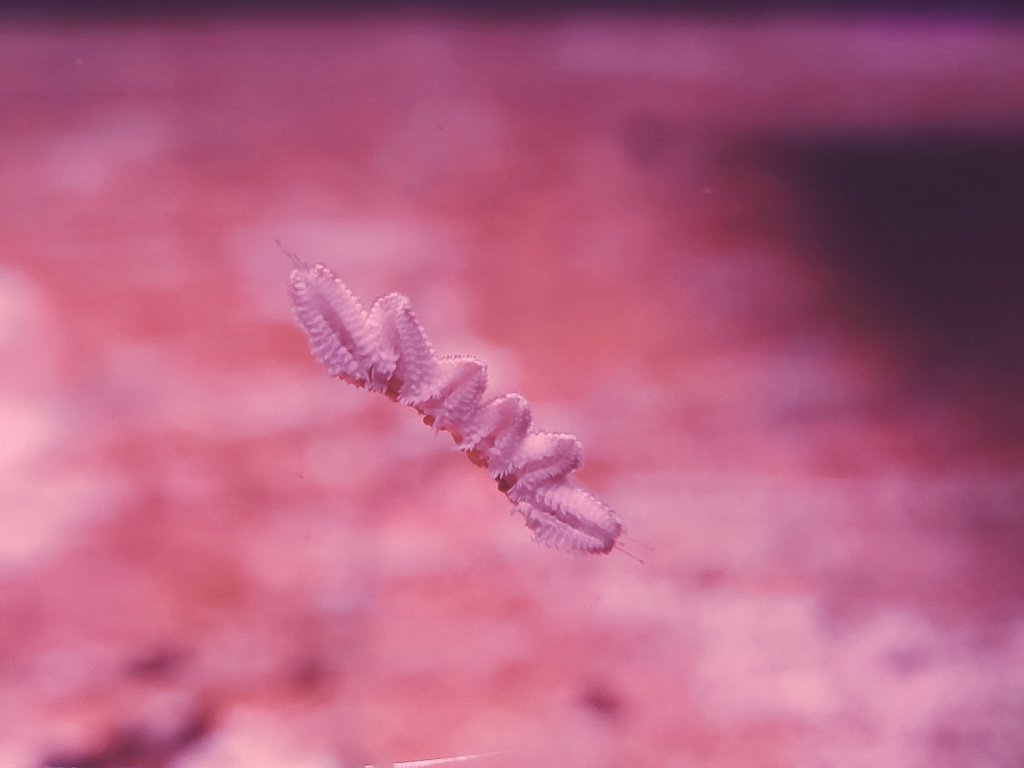 I guess it's time to start filling this empty space with a monster aquarium. Construction will start this weekend. 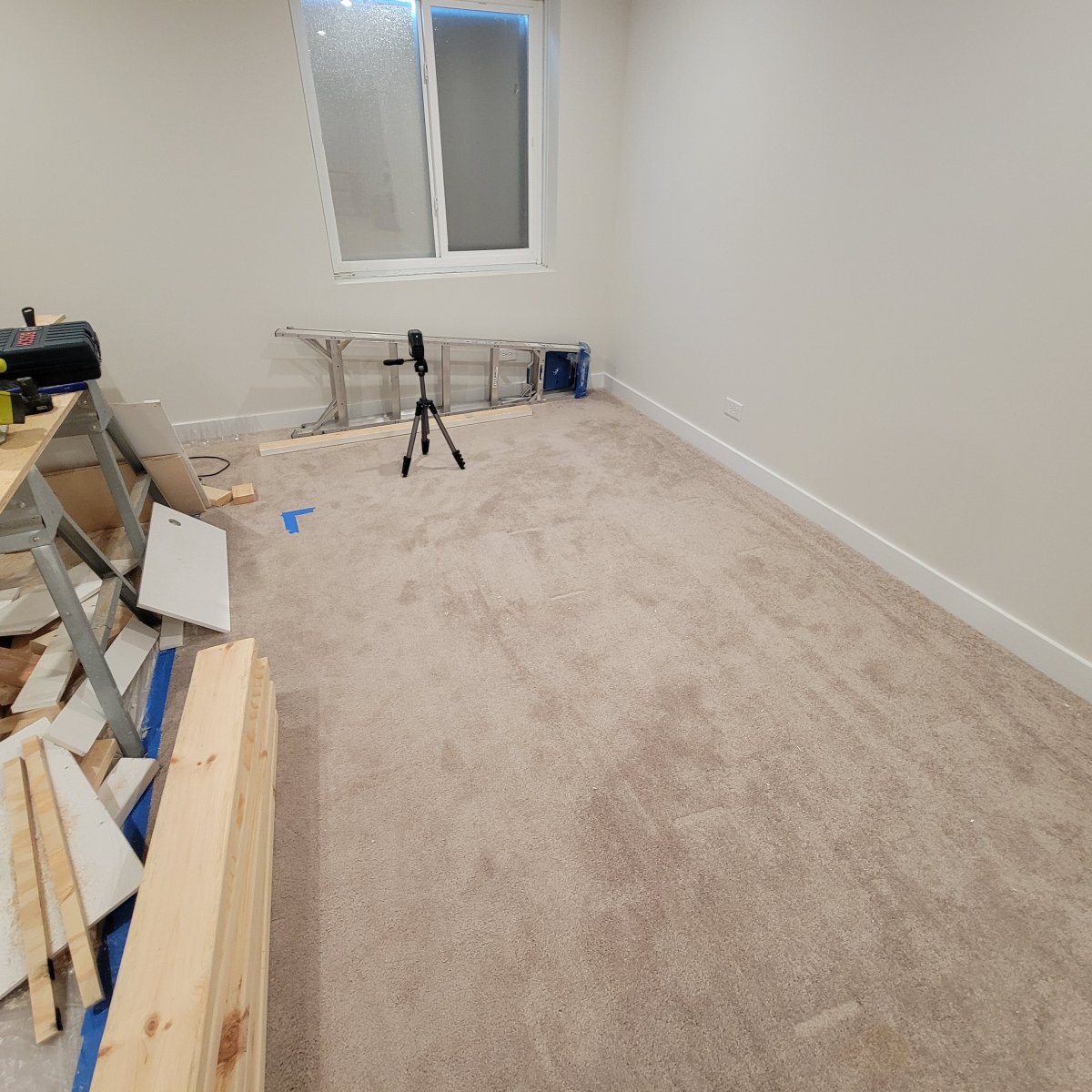 Thanks for the novel…. Errrr I mean update! Haha you know we are addicts. Feed us

AlexG said:
I guess it's time to start filling this empty space with a monster aquarium. Construction will start this weekend.

Guessing competition time Alex! You told us 30 inches high already so I'm guessing 10' x 4' for the other dimensions!