acmonster said:
@AlexG, do you have any links for the trap you built under the utility sink? I'm setting up a sink now in my fish room. I'm finding similar setups for ceramic hobbyists. And a brand called Gleco that sells a smaller container that mounts directly into the plumbing. Thanks again for keeping us all informed of your progress!
Click to expand...

@acmonster I made the trap myself with pumping parts I already had on hand. Its easy to build. I put a diagram below to show what's going on inside the bucket. More or less the bucket should only fill to the level you set with the PVC inside the bucket once its sealed. I added the PVC extensions to ensure I can see there is a proper seal on the bucket and also so that when I go to clean it out it is not completely full of water. I just need to remember to not empty the water out of that bucket into the sink I just removed it from when I do a cleaning. This design would also allow the bucket to simply be swapped out for another one if its really dirty. Let me know if you have any questions. 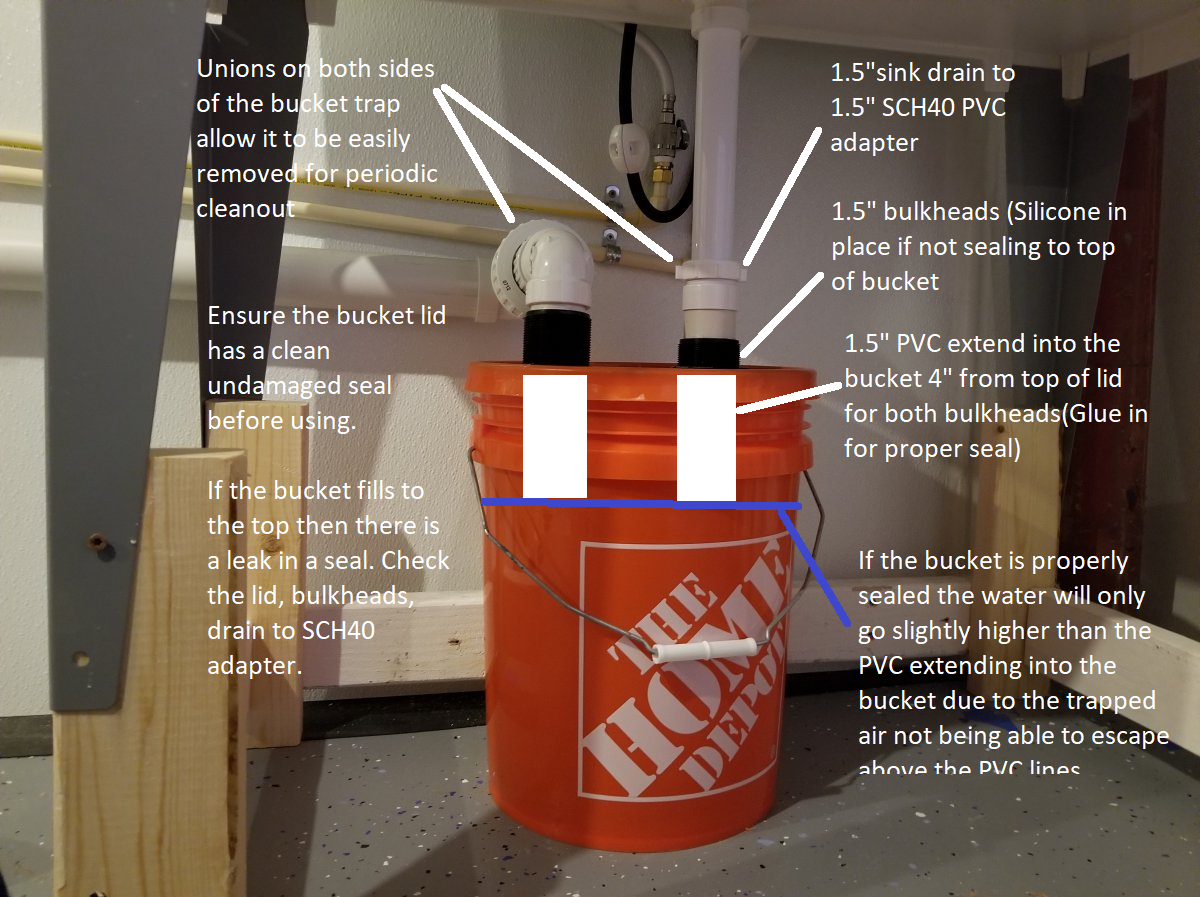 AlexG said:
@acmonster I made the trap myself with pumping parts I already had on hand. Its easy to build. I put a diagram below to show what's going on inside the bucket. More or less the bucket should only fill to the level you set with the PVC inside the bucket once its sealed. I added the PVC extensions to ensure I can see there is a proper seal on the bucket and also so that when I go to clean it out it is not completely full of water. I just need to remember to not empty the water out of that bucket into the sink I just removed it from when I do a cleaning. This design would also allow the bucket to simply be swapped out for another one if its really dirty. Let me know if you have any questions.

What a thorough reply and explanation. You are the best. Thank you so much.
OP

Its been far too long since the last update. After the glass was installed in the 700 I turned my attention to getting the 265 gallon ready for a fill test. Mounted all the pump controllers, power supplies, and cut the lids to accommodate all of the new drain and return lines going in and out of the 265 gallon tank. There are 5 DC pumps that will be in the 265 gallon sump to start (2x recirculating pumps for the skimmer, 1x return for 700, 1xreturn for 400, 1x return for 150 gallon & UV & Bucket filler). for the fill test all water being used is RO/DI. On the first fill test on the 265 gallon tank the 4" bulkhead was leaking so after a drain of ~75 gallons from the sump into the 150 I was able to reseal the 4"bulkhead with silicone. The next day I was able to fill the 265 to capacity with no leaks. A few days latter I filled up the 150 and did not have any leaks on the return or the 50' drain line. Yes the drain line for the 150 gallon tank is ~50' of 1.5" PVC. The 150 was running for about a week and was slightly out of level without creating a twist on the seams but the tank was drained for another test fill and releveled. The 150 is just waiting for water to be made up and it will be ready for another test fill to check level. After 2 weeks for curing the 700 gallon refugium was ready for the start of its test fill. I removed all the bracing holding up the glass, inspected the seal, vacuumed out the inside of the tank and then it was time to turn on the return pump and see if it hold water. The first fill on the 700 was ~12" or 1/3 and it was allowed to sit for a day with a tape line on the glass to ensure the water level was not changing which would be really bad because that water would have to go somewhere outside of the tank. Lots of flashlight inspections of the tank top t0 bottom were done with lots of checking on the glass seal. Before a 2/3s fill test on the 700 could be completed the cross braces needed to be installed. I did not install the cross braces before the 1/3 fill test because I needed to flatten out the pond liner to avoid wrinkles from the holes that will be needed in the pond liner for the cross braces. Also at 1/3 fill test there would be little if any pressure on the top braces of the tank so I felt comfortable with that level of fill test without them in place. The cross brace install was really easy once the pond liner was flattened out and held with some clamps while I put the holes in for the threaded rods. I then sanded the pond liner around the holes and applied silicone where the PVC meets the pond liner. The nuts on the threaded rods were just tightened enough to hold the top braces in place so they would be unable to bow outward from the water pressure. With the cross braces in place I went to the 2/3s fill test and removed any wrinkles that I could get to on the pond liner. Then more leak inspections started top to bottom. The final piece of the puzzle to get the fill test completed on the 700 was the drain lines. I used 2 x 2" drains which I plumbed to the 265 gallon sump. I will admit it was my first time putting bulkheads through pond liner and I figured this will be the high risk area for leaks. The bulkheads and pond liner were both cleaned with isopropyl alcohol and then siliconed in place to ensure a good seal. After 48 hours at 2/3s fill test and making more RO/DI water the tank was ready for a full scale test. I have to admit I was concerned there would be leaks on the bulkheads if anywhere. After the fill test reached the plumbing it was flashlight inspection time for the tank and plumbing. Checking for leaks on the tank, bulkheads, drain lines, bowing on the tank, changes in level. The first test only last ~20min then I shut it down for the night as I did not want the tank to run overnight without supervision. The next morning I got the pump fired up again and have continued with periodic leak inspections. So far nothing has leaked yet and I am letting the return run 24x7 but I will keep inspecting for the foreseeable future. I will be working on the assembly of the canopy for the 700 now and then I am hoping a few more items are received so I can move some other parts of this build forward. Just need to get my dehumidifier in and connected then get the 400 gallon tank running and I will be ready for some full scale testing and an ICP test before I add salt to the system. 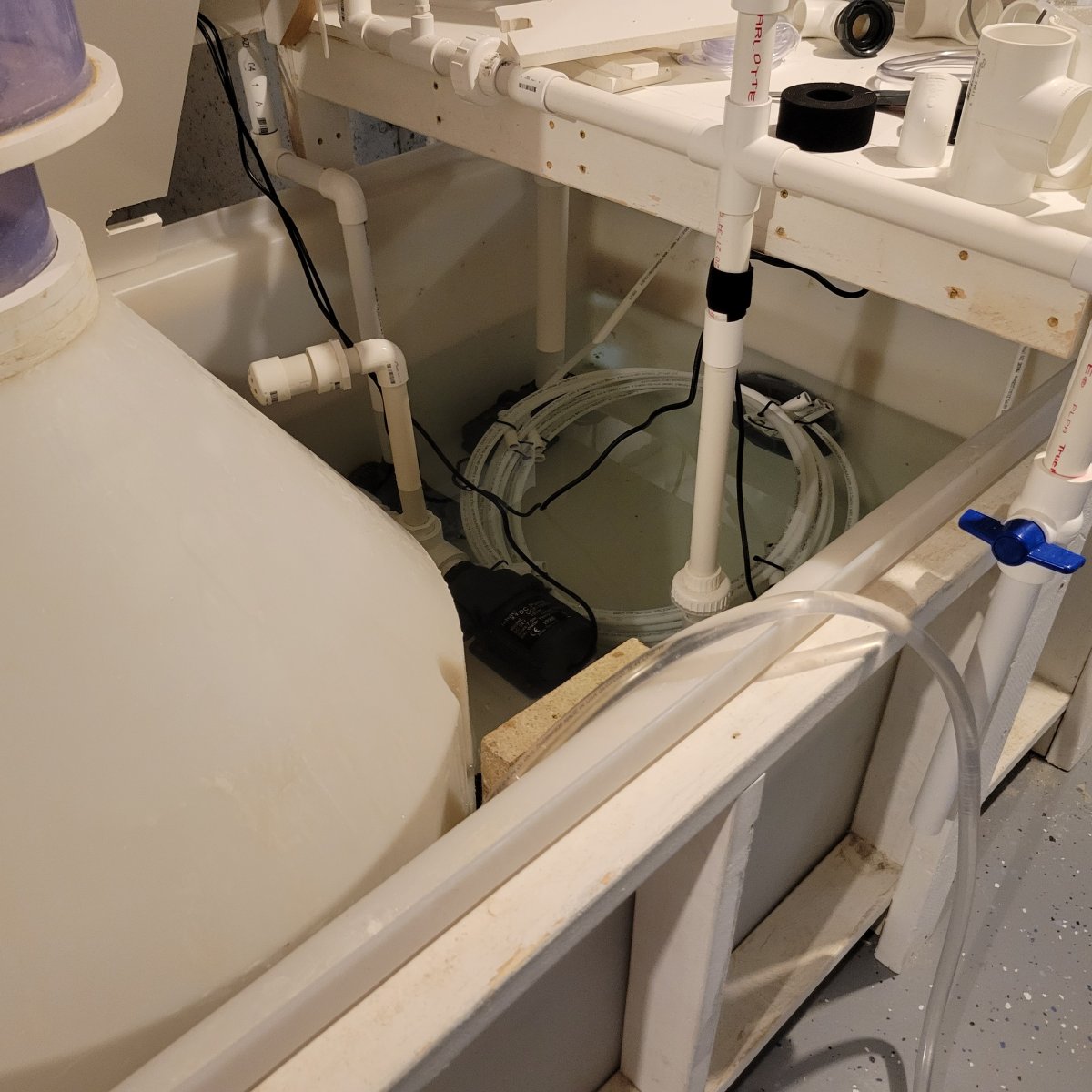 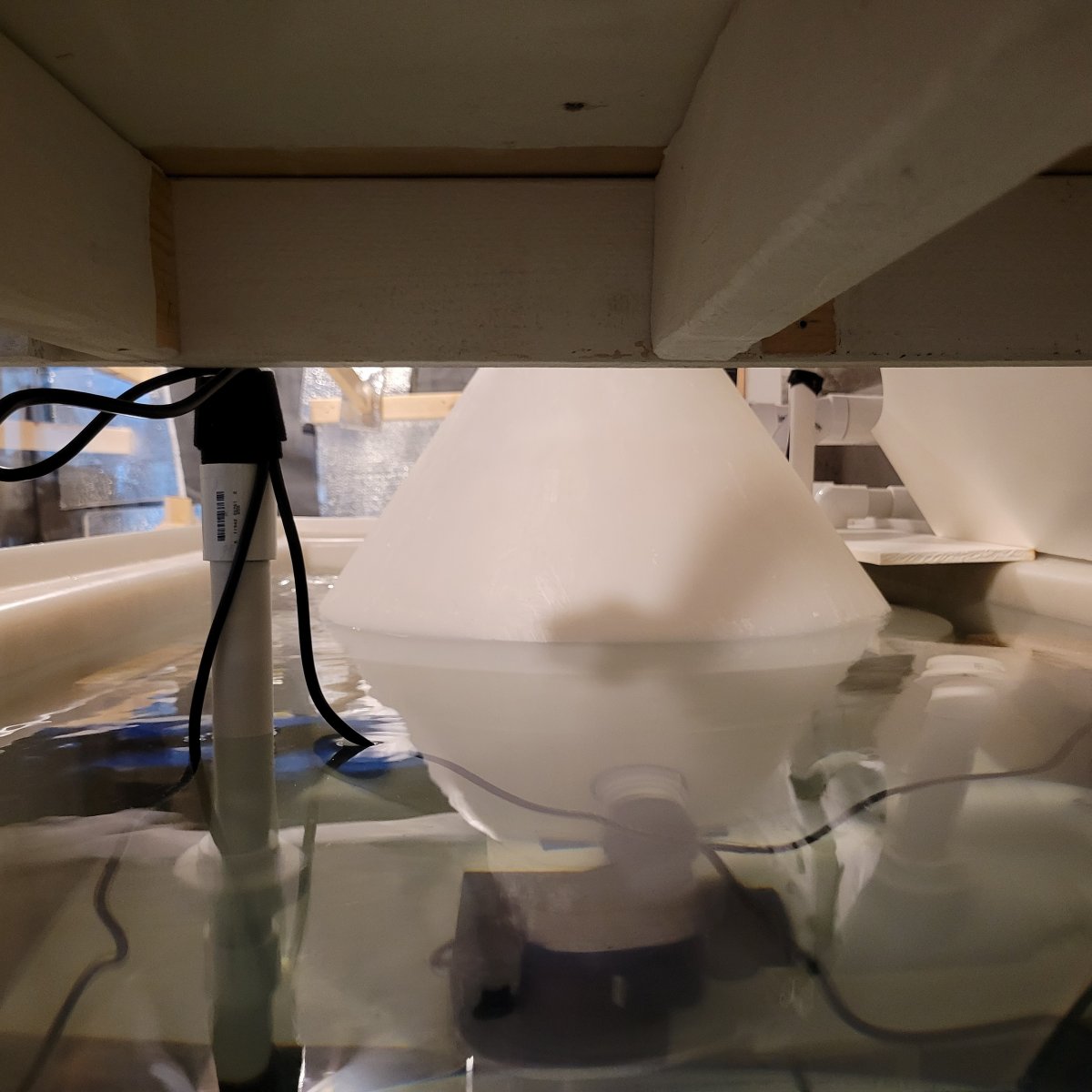 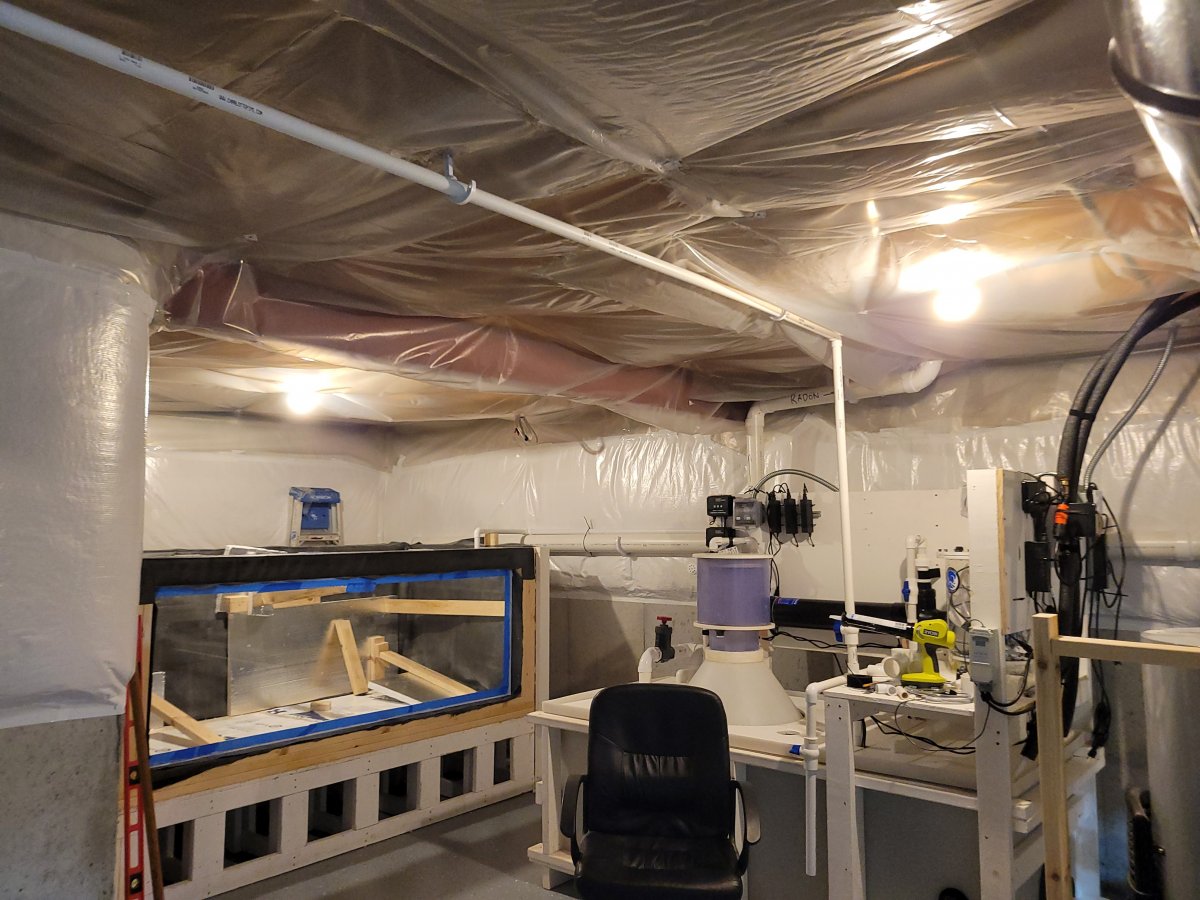 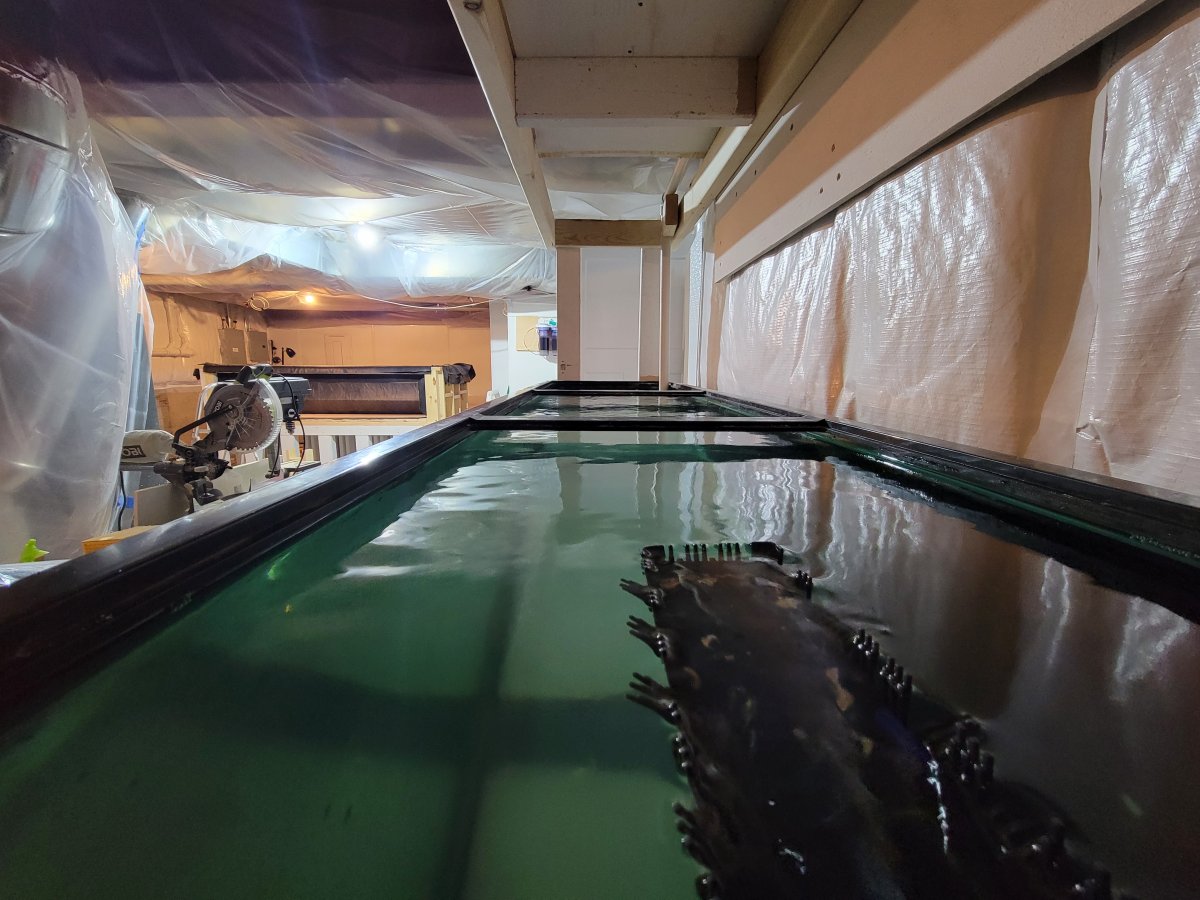 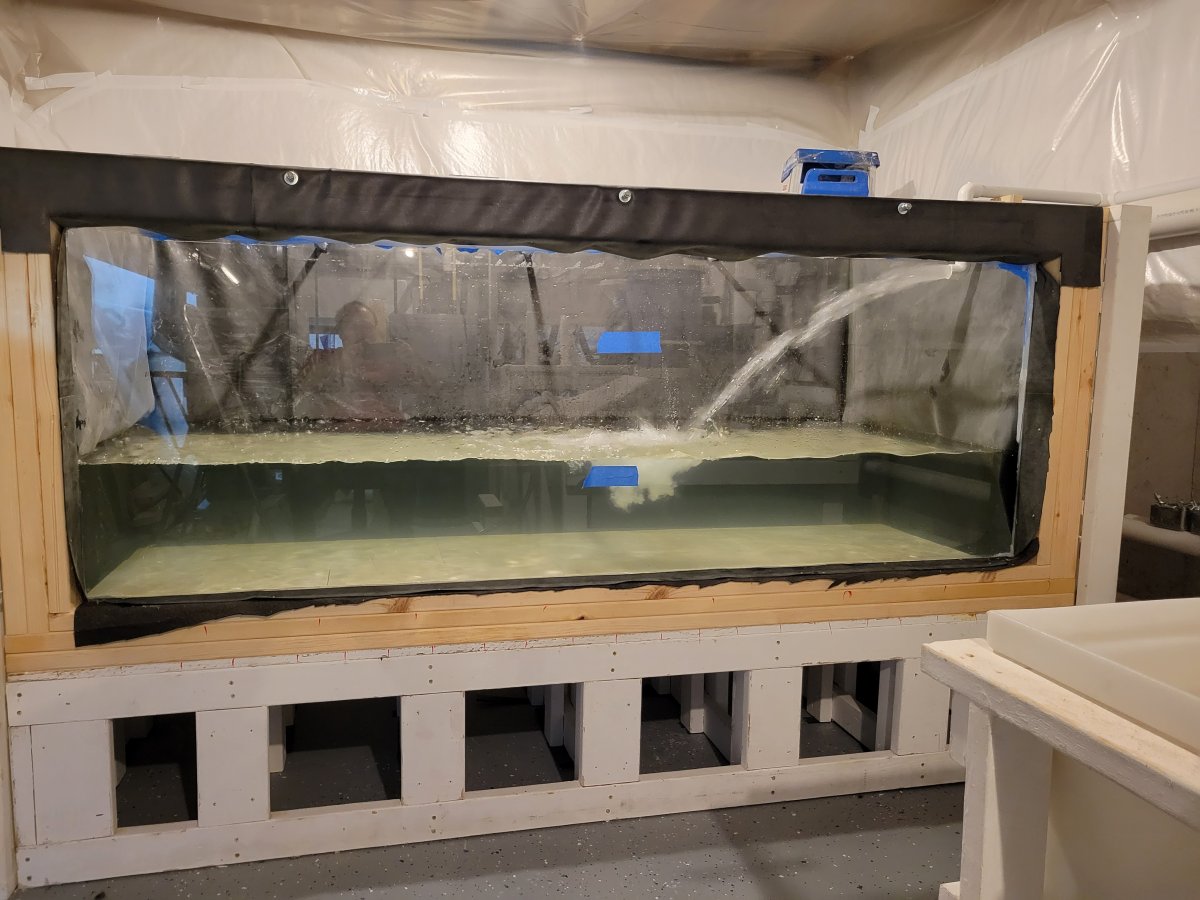 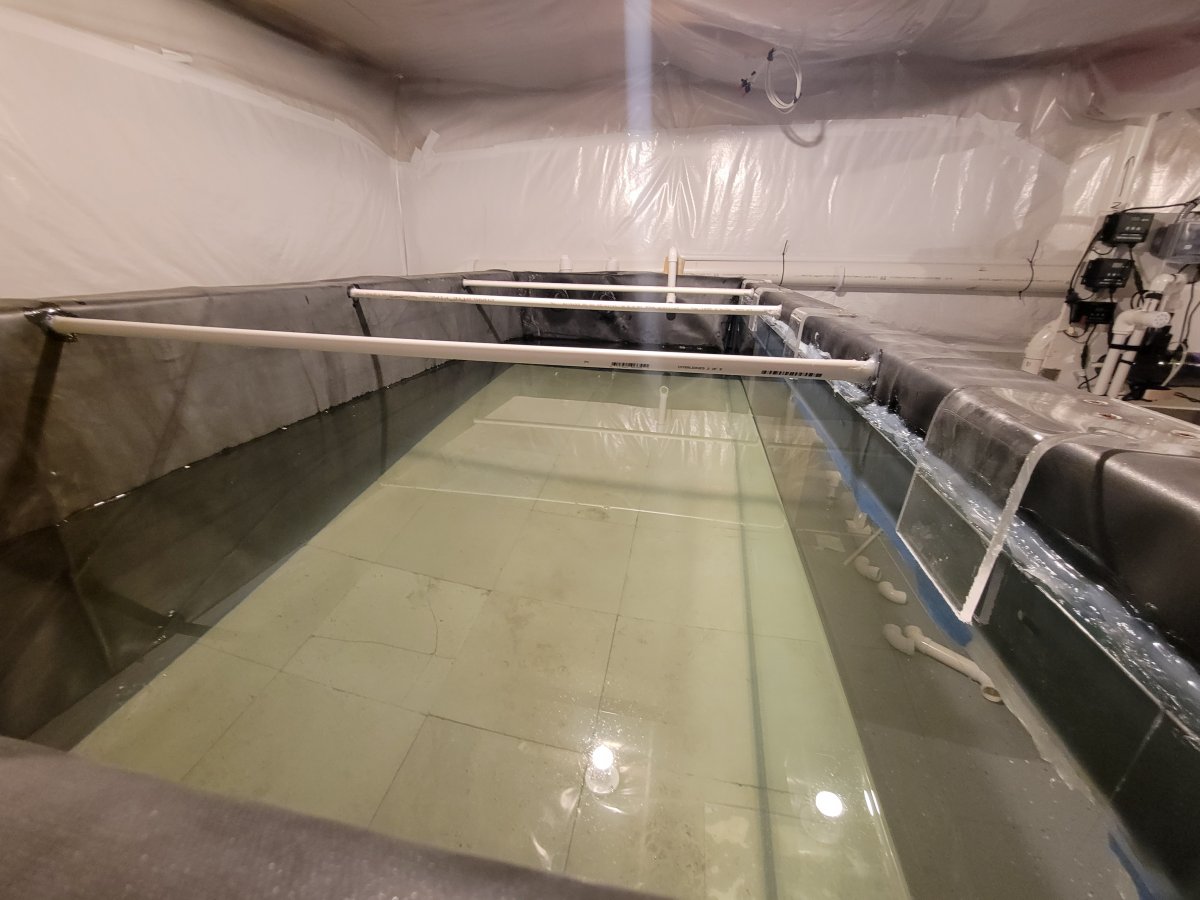 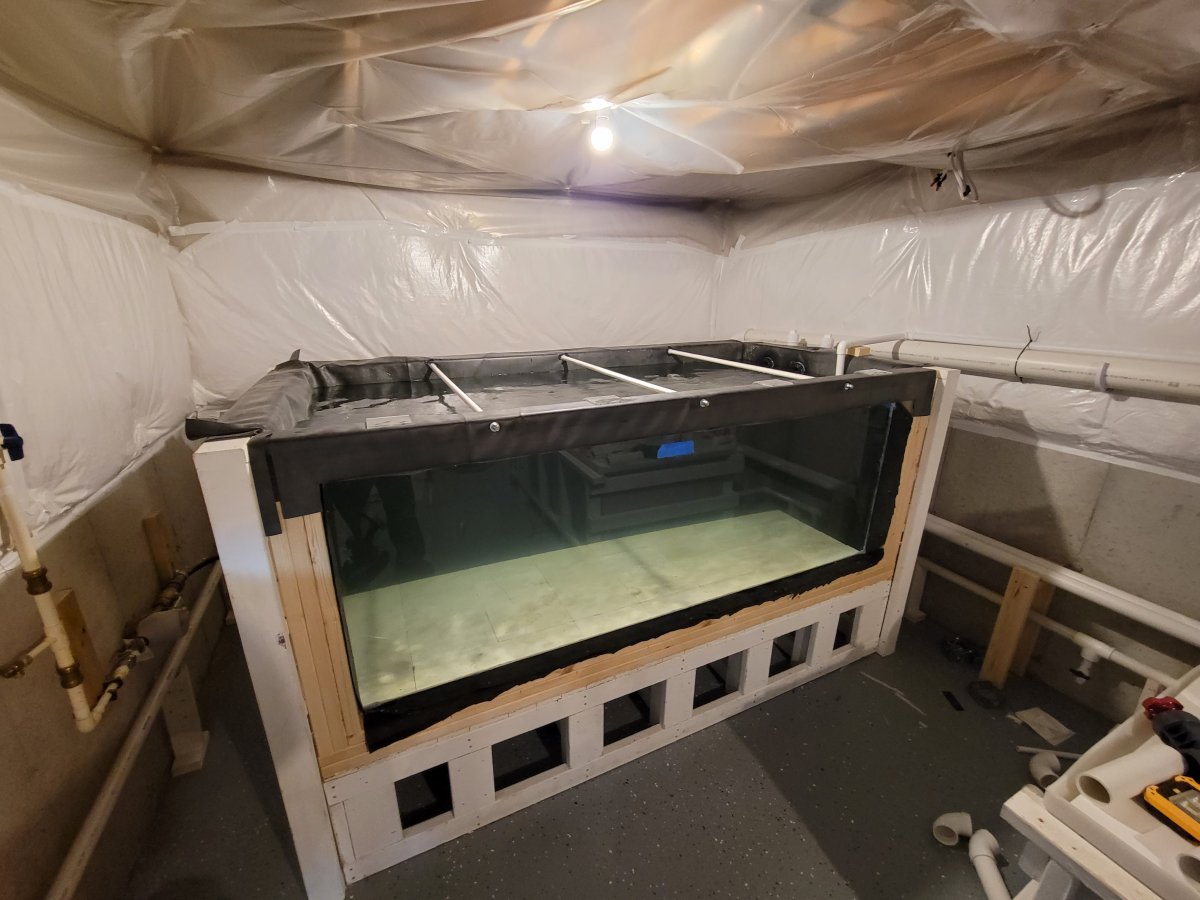 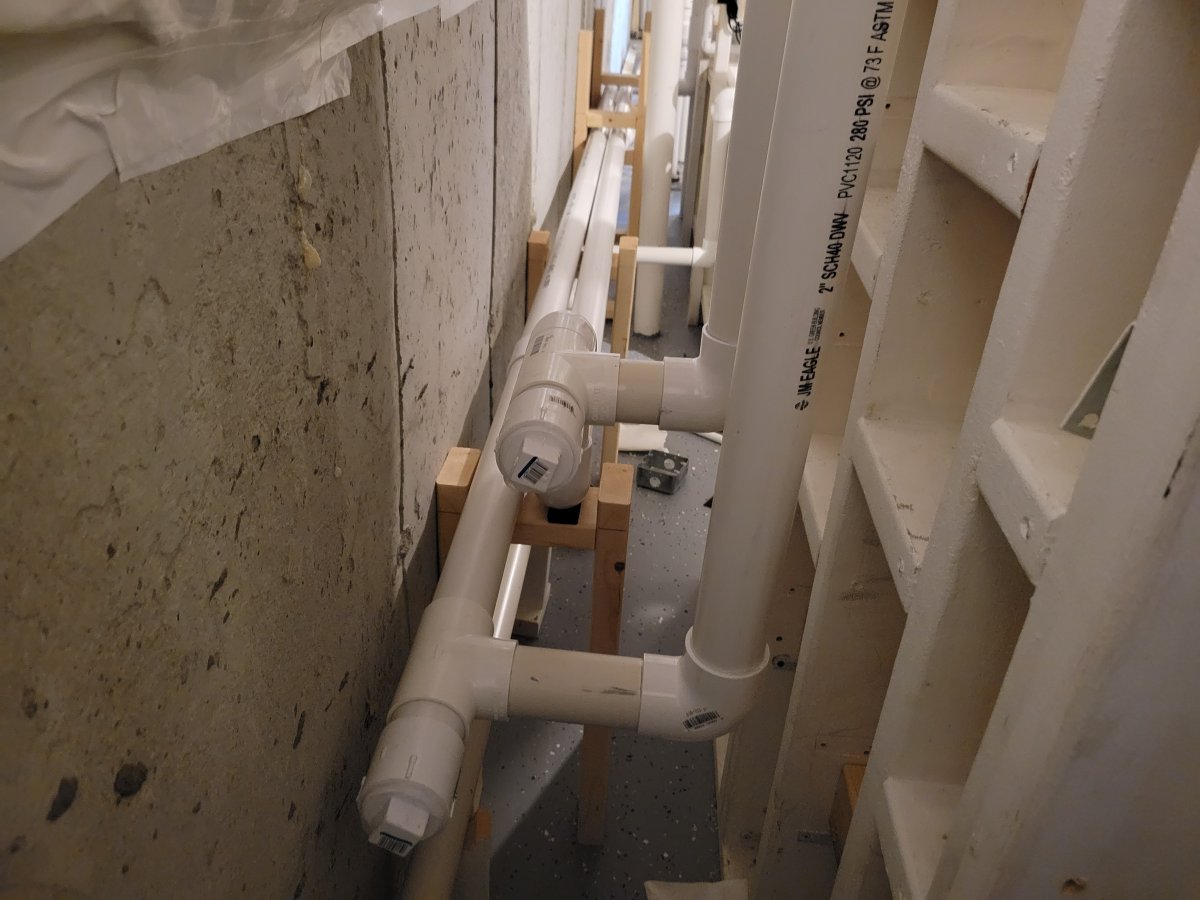 It was a busy weekend. The glass for the 400 came in Friday and was installed Saturday morning. The 400 will be ready for a fill test on 4-3-21 which is a really weird date to land on. I managed to get my canopy on the 700 by myself which was a really bad idea and I should have had my wife help me. Let's just say the canopy went for a little swim before it got into its final place. I should have the canopy powered up, light rack installed, and panels installed this week. My dehumidifier also arrived late last week and I built a stand and got it running tonight. The dehumidifier is a beast and I can't believe how quickly it is taking down the humidity in the fish room. I also integrated the fish food freezer into the stand to save some space. 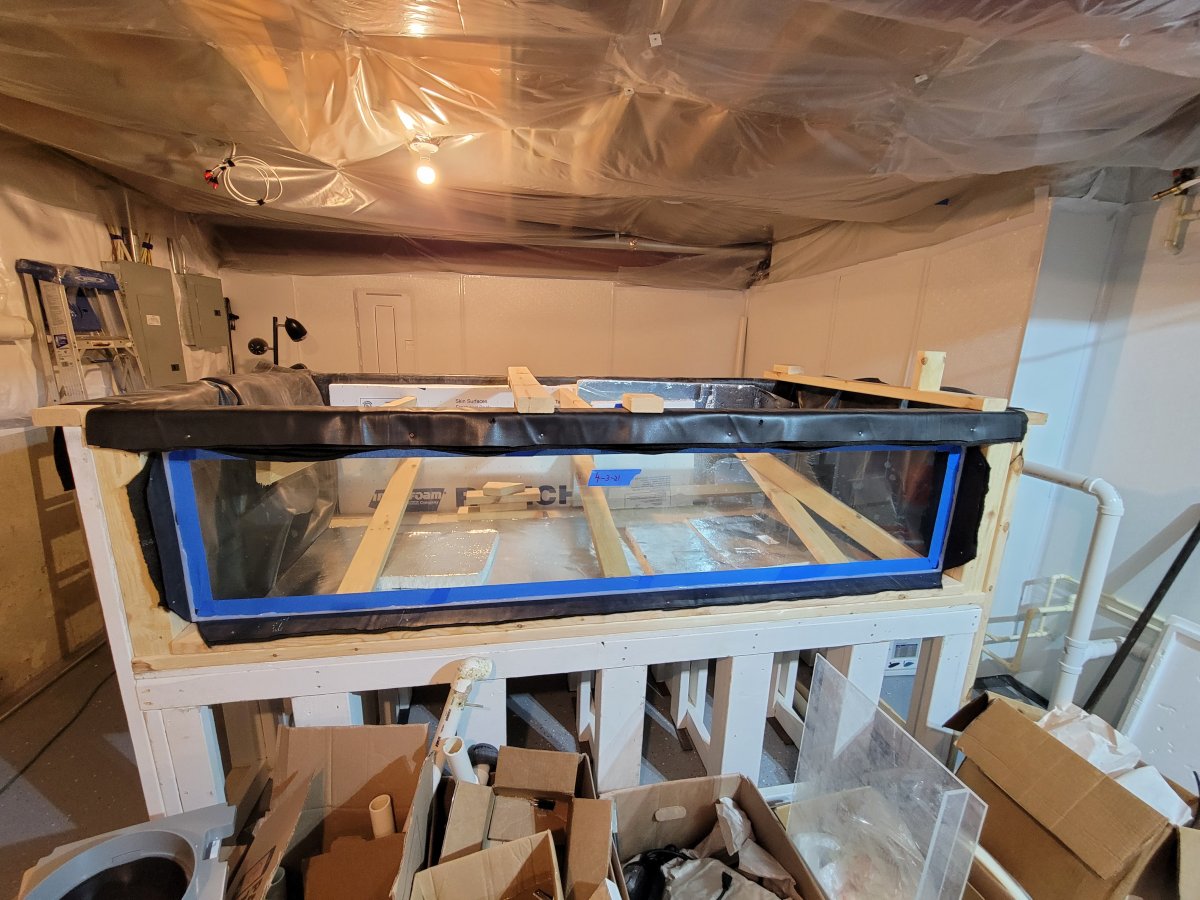 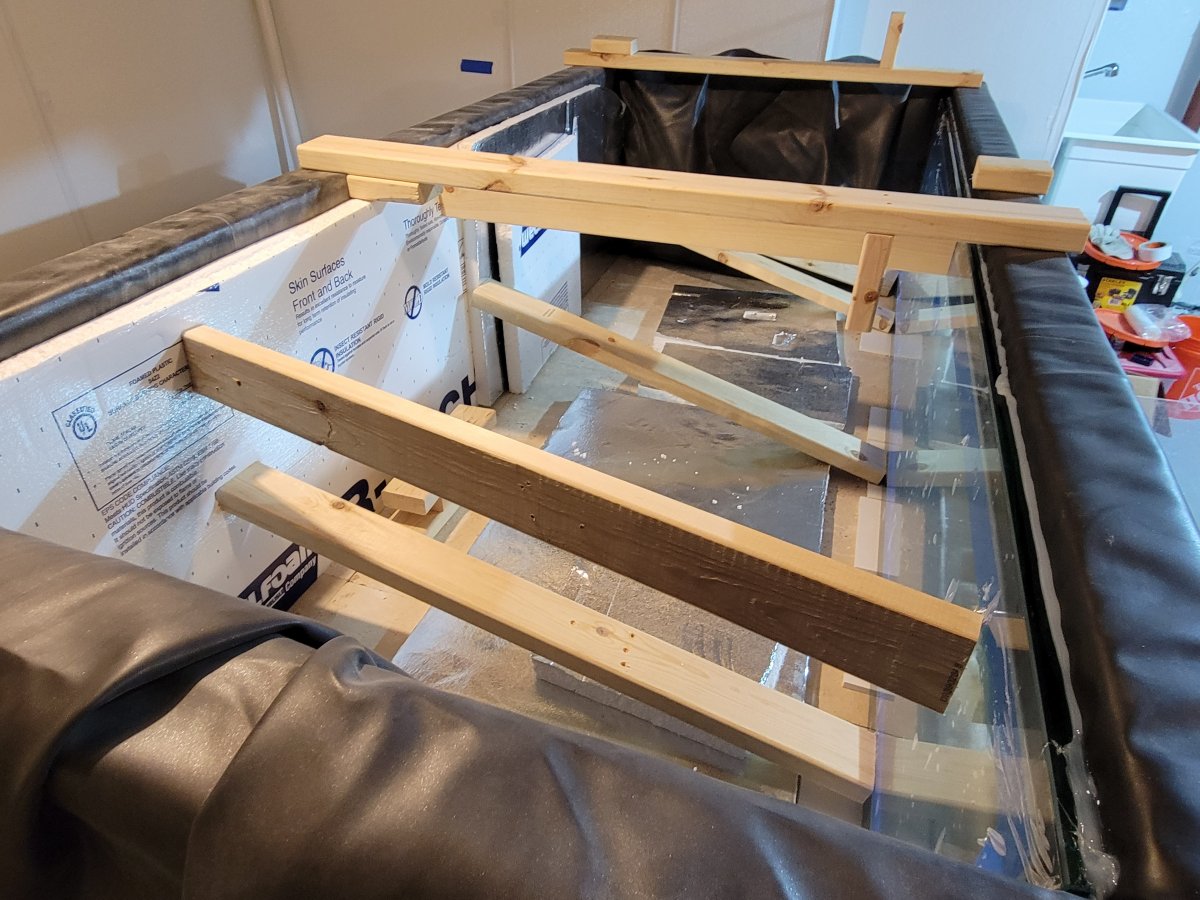 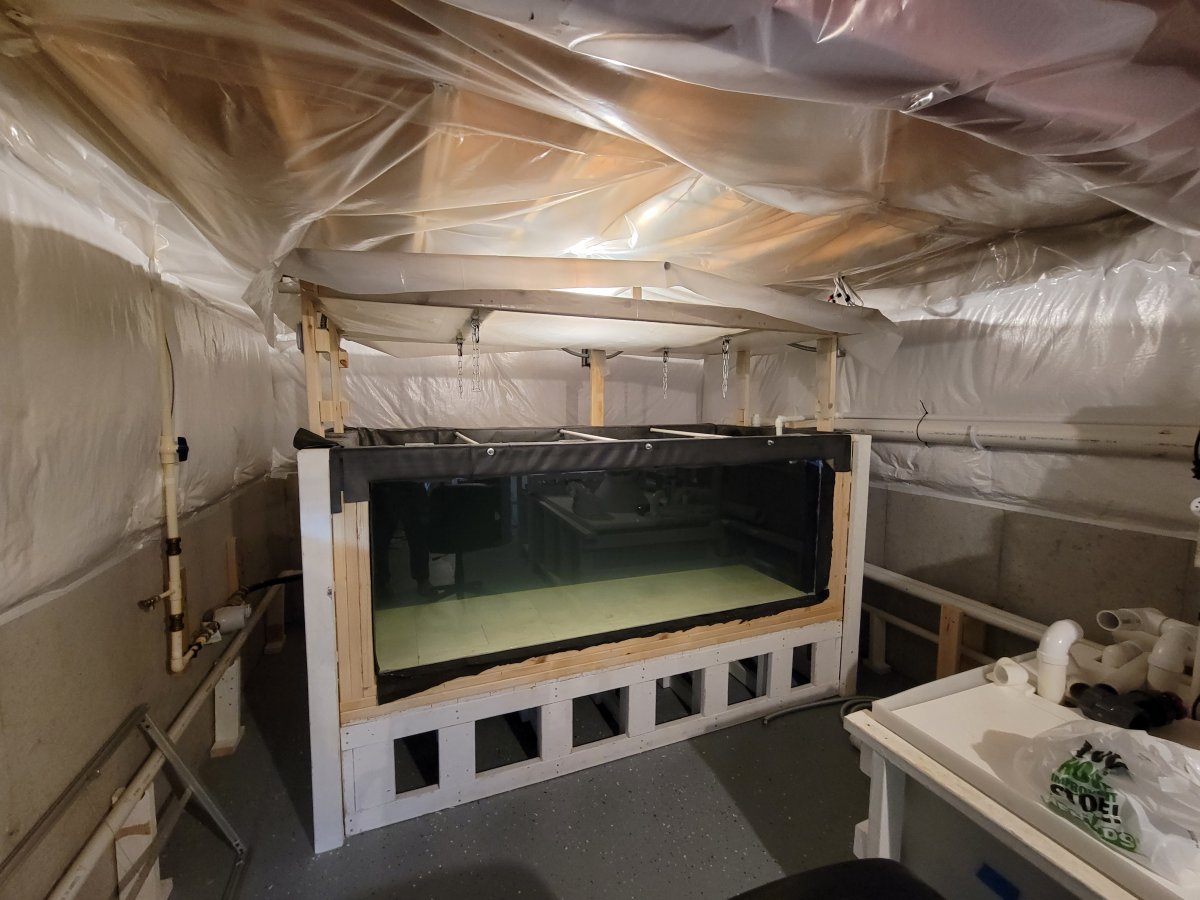 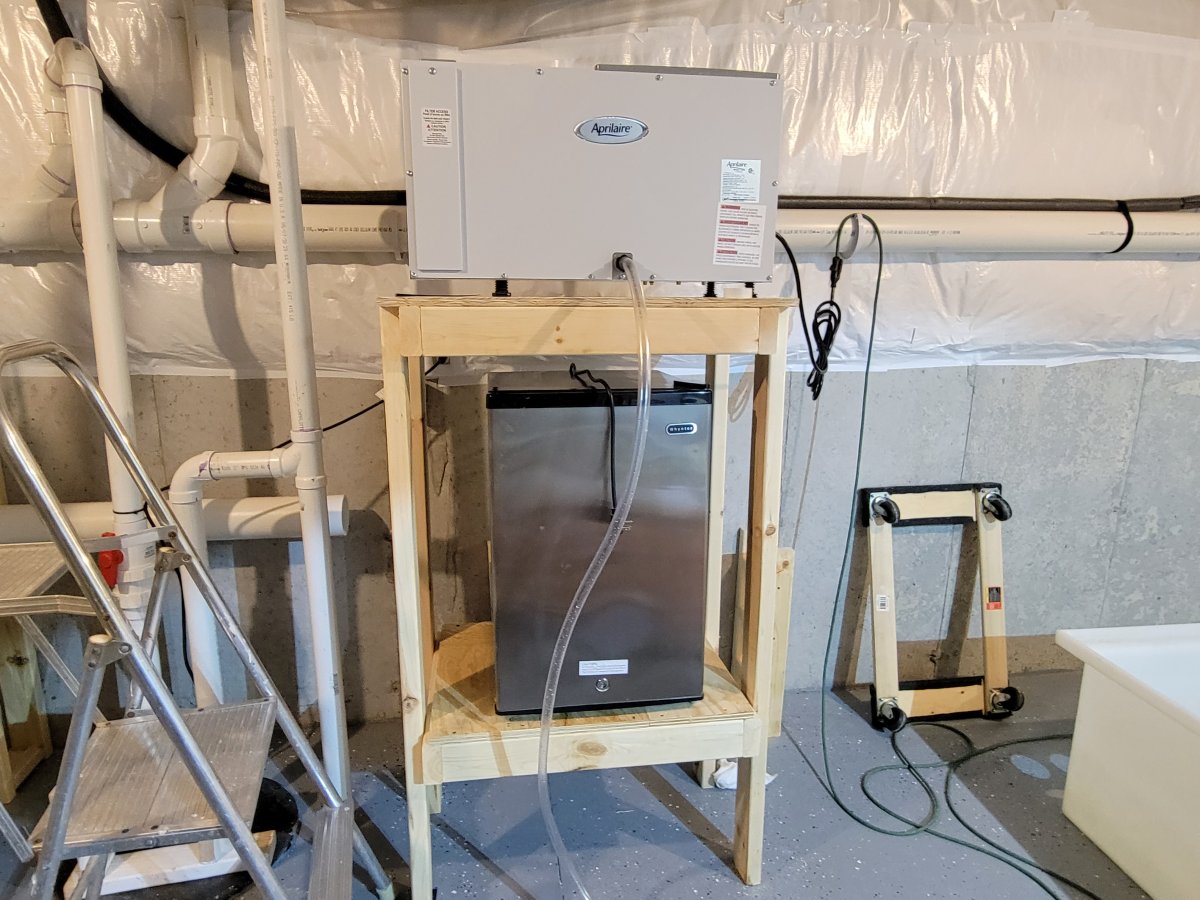 If it were only that easy. I am starting to get closer though with the glass installed on the 400. Once that tank is ready for a test fill I will run an ICP test before adding salt to the water. Then I will transfer everything over to the new system.

I guess it has been a few weeks so I had lots to catch up on. great progress man all the works makes me question why my build is taking forever...lol

nice to see this coming together your last tanks where inspiring and I might do this in my basement in the net few years...
OP

I finally got around to it and got an update video out. 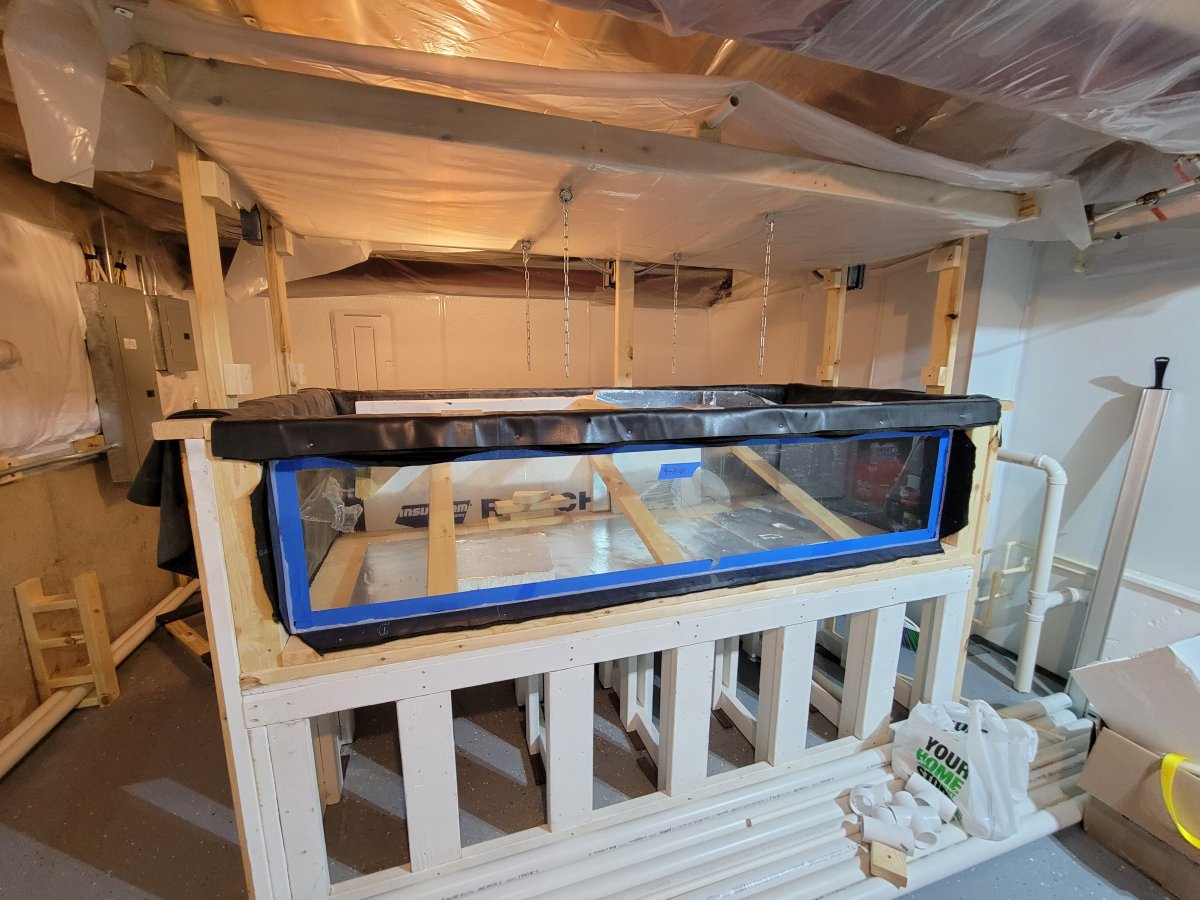 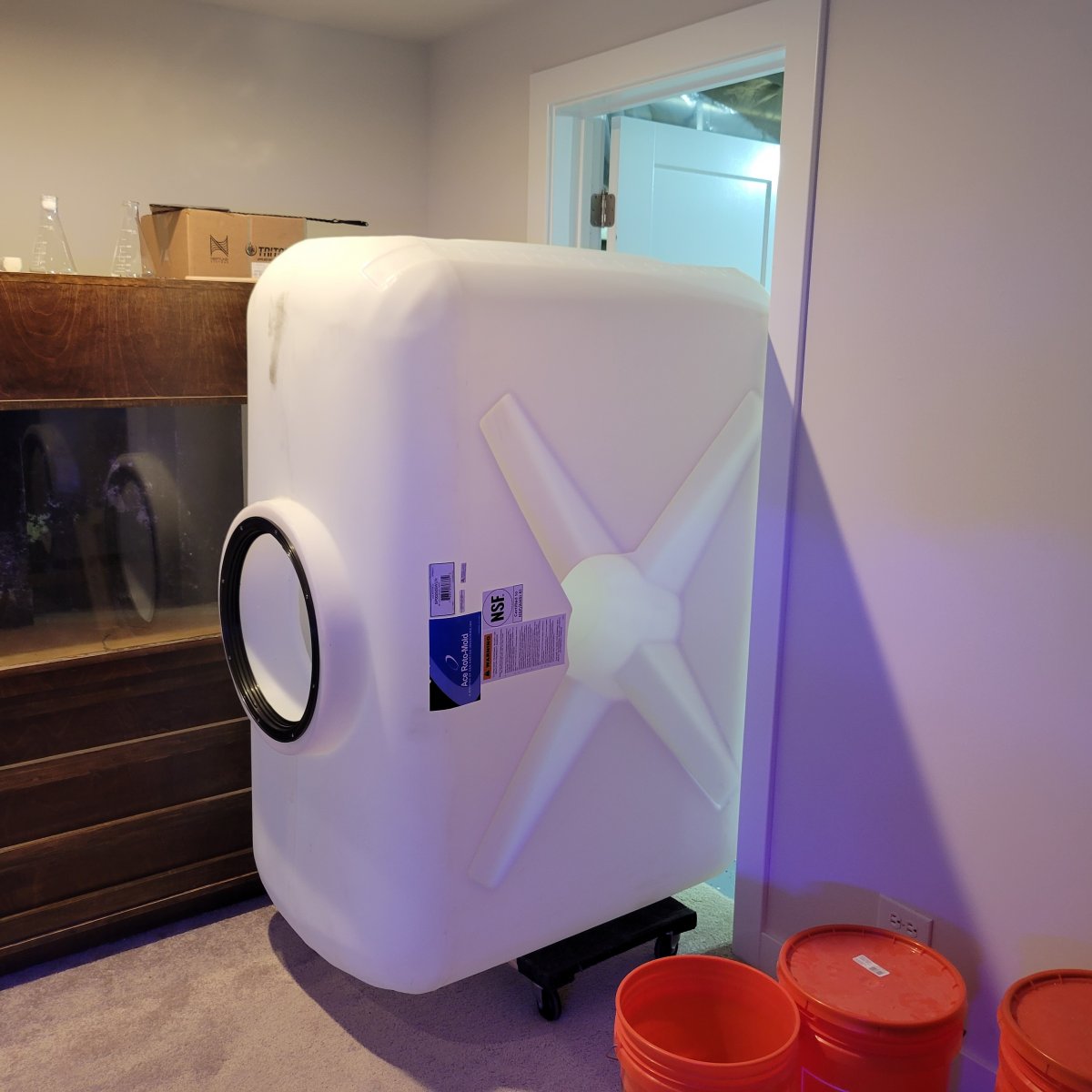 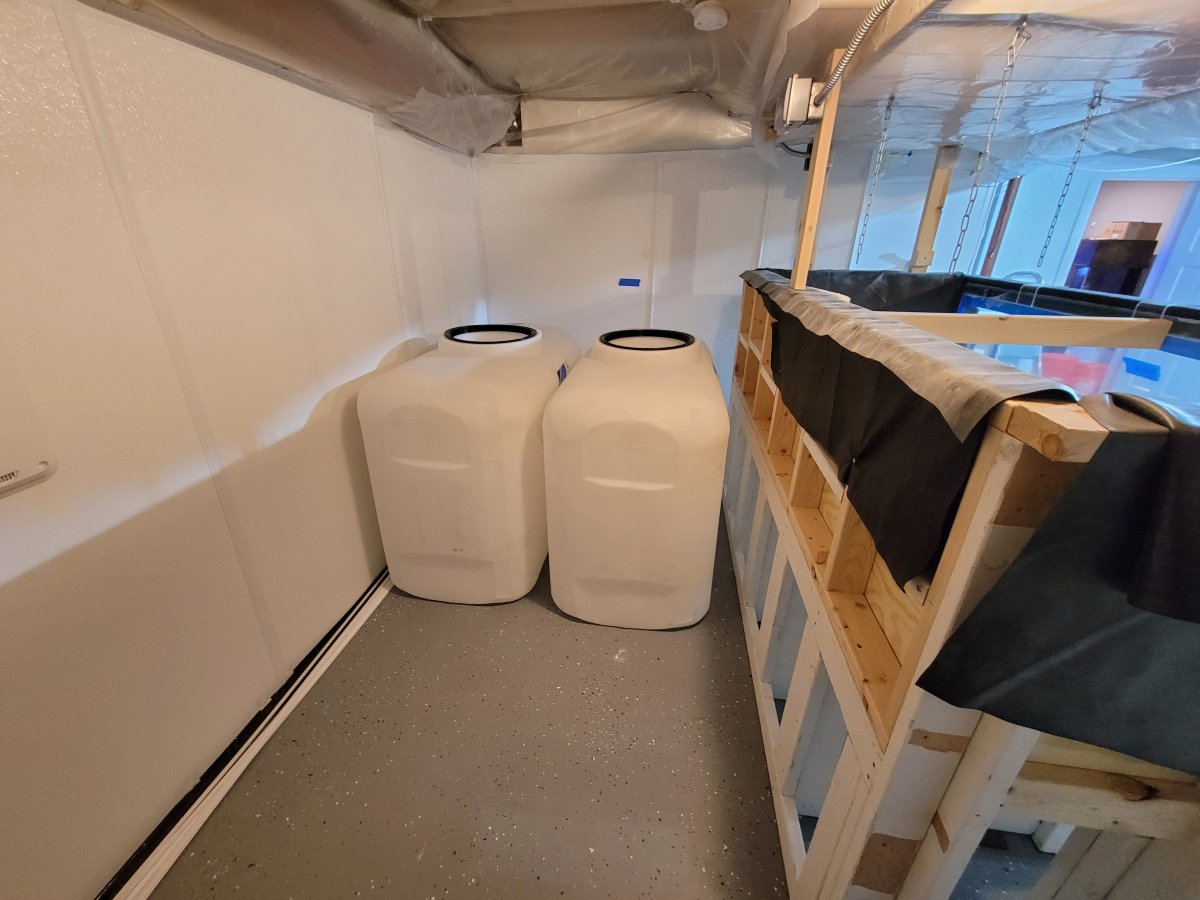 Great system and awesome ideas on your thread!
OP

I got the water storage tanks on stands now. Lumber is getting ridiculously expensive. Today I will be working on plumbing and maybe cleaning up this mess. 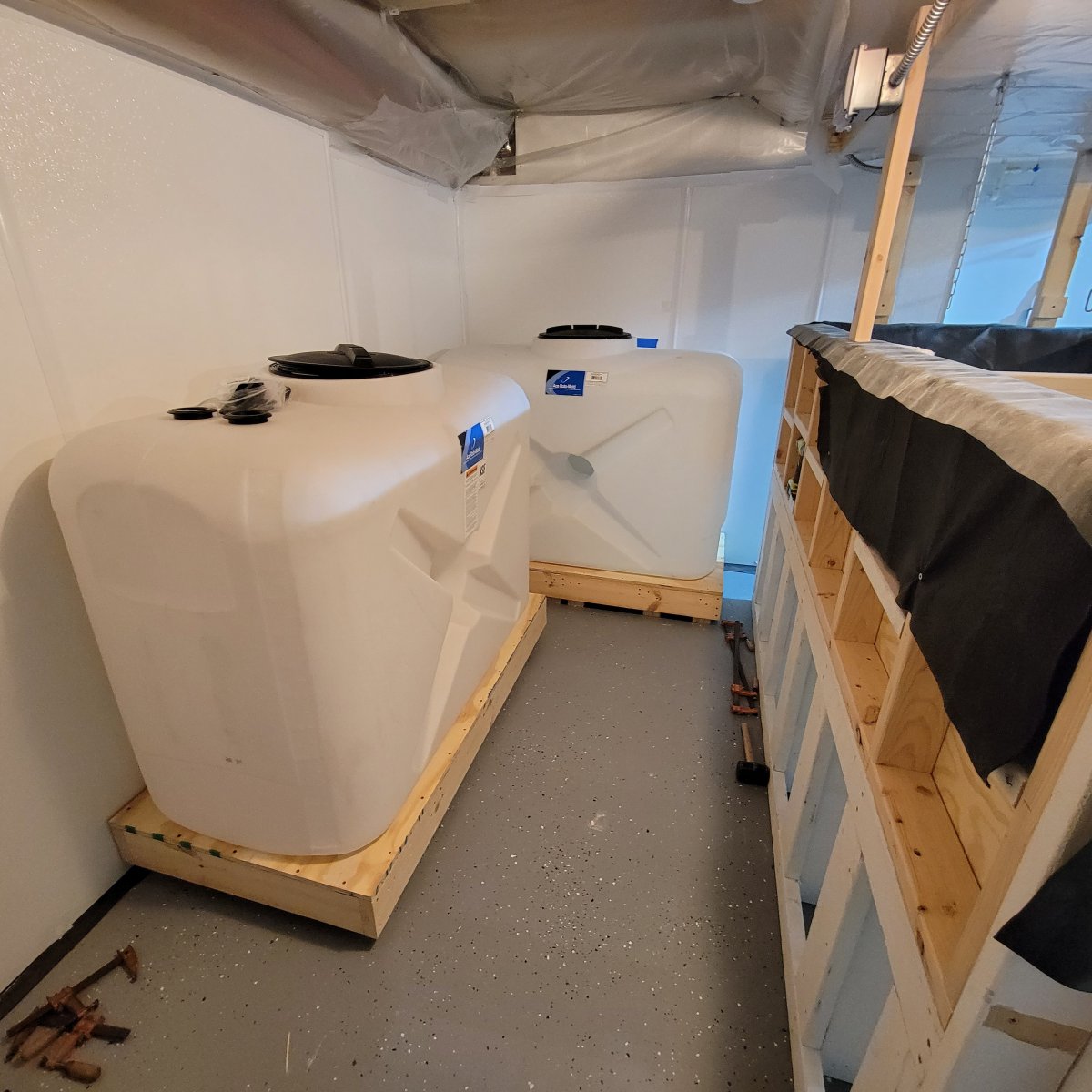 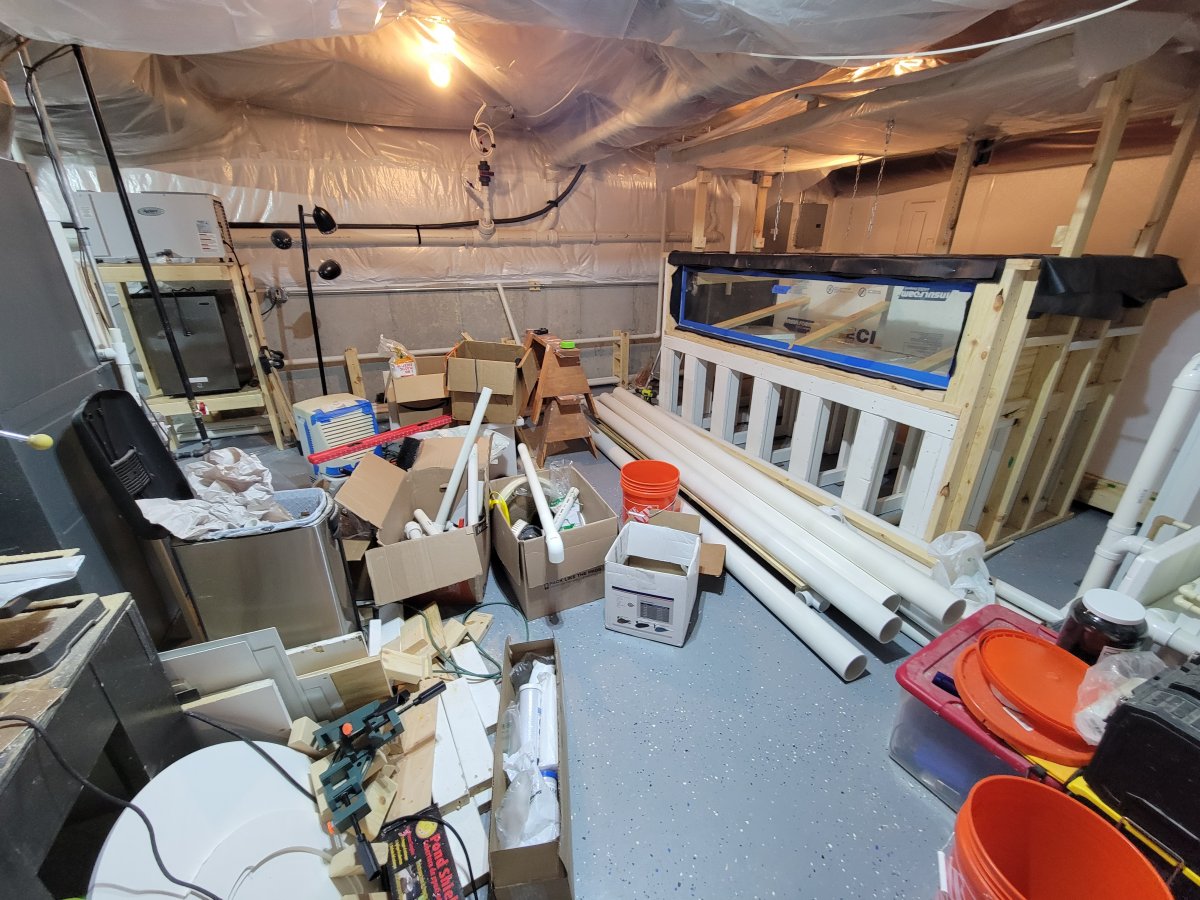 Stick with the orange buckets as they add a nice splash of colour, happy to help!

Update time. It has been a busy weekend of mostly plumbing and the start of another test fill. I got the return line for the 400 gallon tank completed on Friday night along with dry fitting the 4" vent line, 4" display drain line, and glued in the long runs of 2" drain line for the 400. With all that plumbing completed I was able to begin the test fill on the 400 Saturday morning. So far the fill test is looking good without any issues but it will need to be filled to capacity for a couple of weeks to complete its initial testing. The full capacity fill test is on hold for the moment though as I have to finish the drain line plumbing which is more complicated with the inline water storage tanks as I need to be able to isolate those tanks for water changes so valves are needed for water diversion when a water change is going to be done. Its just going to take some time to get all the drain plumbing and valves in the way I want them. I did however complete all of the plumbing for the skimmer gravity feed and the rarely used filter sock tray. I changed the height of the gravity feed lines this time around which should help with water level adjustment on the skimmer. I am sure it will take a bunch of tweaking once its running but even with freshwater in the system I should be able to calibrate the height of the water in the skimmer. 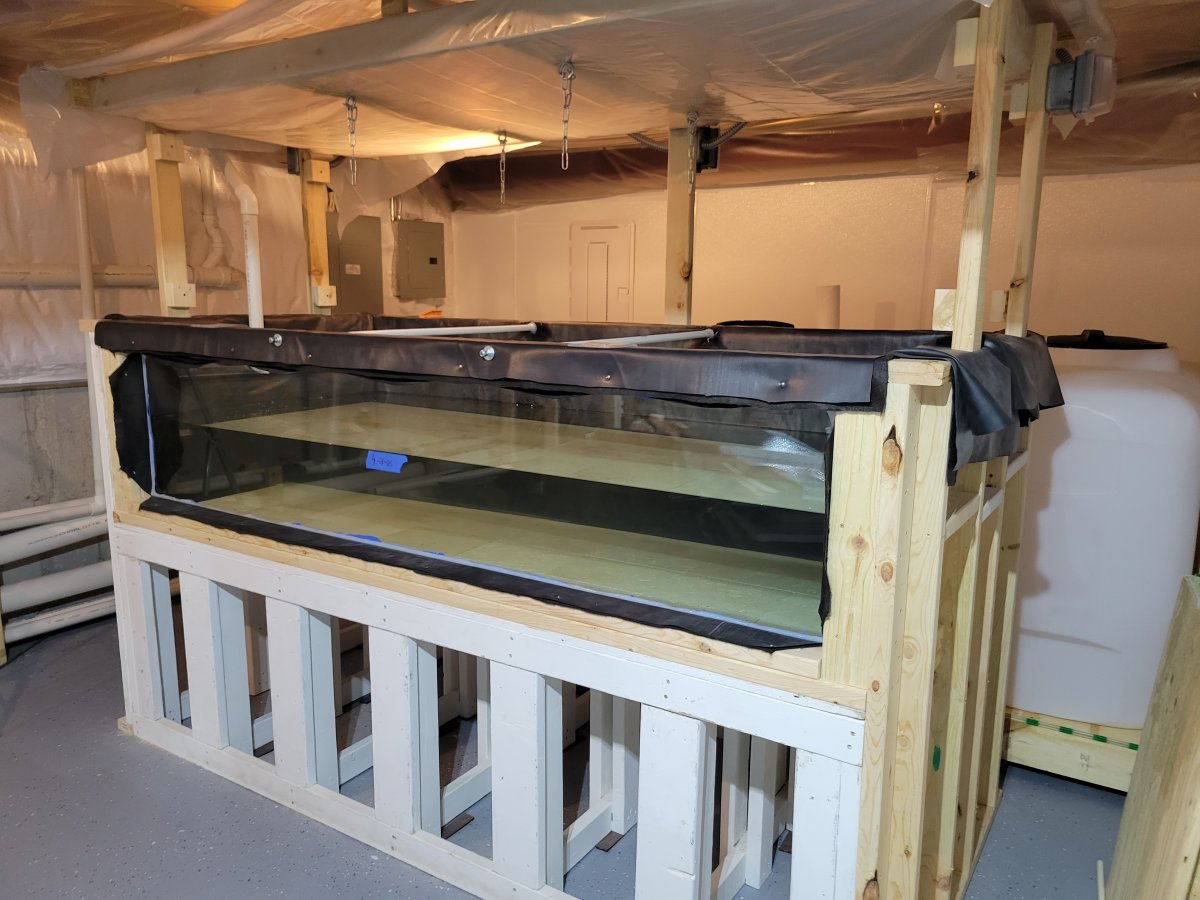 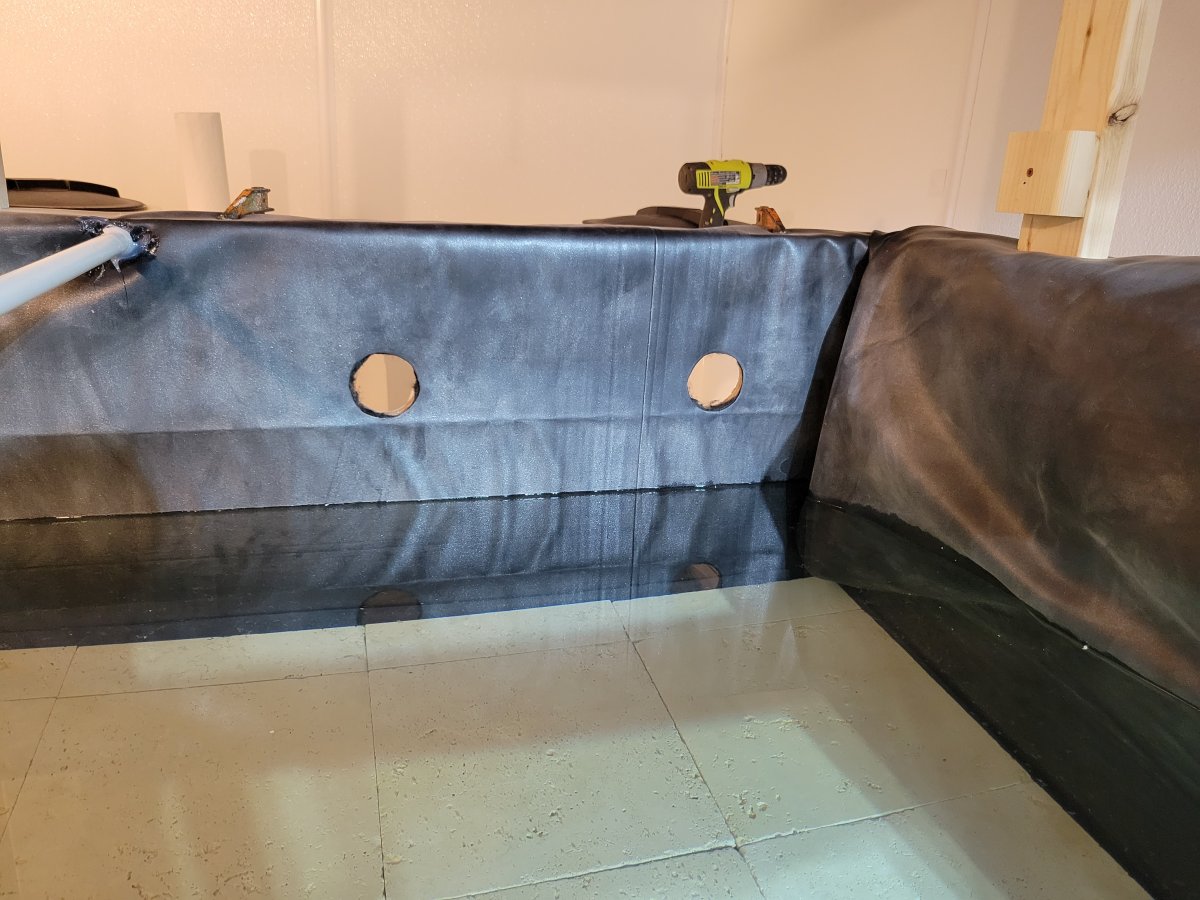 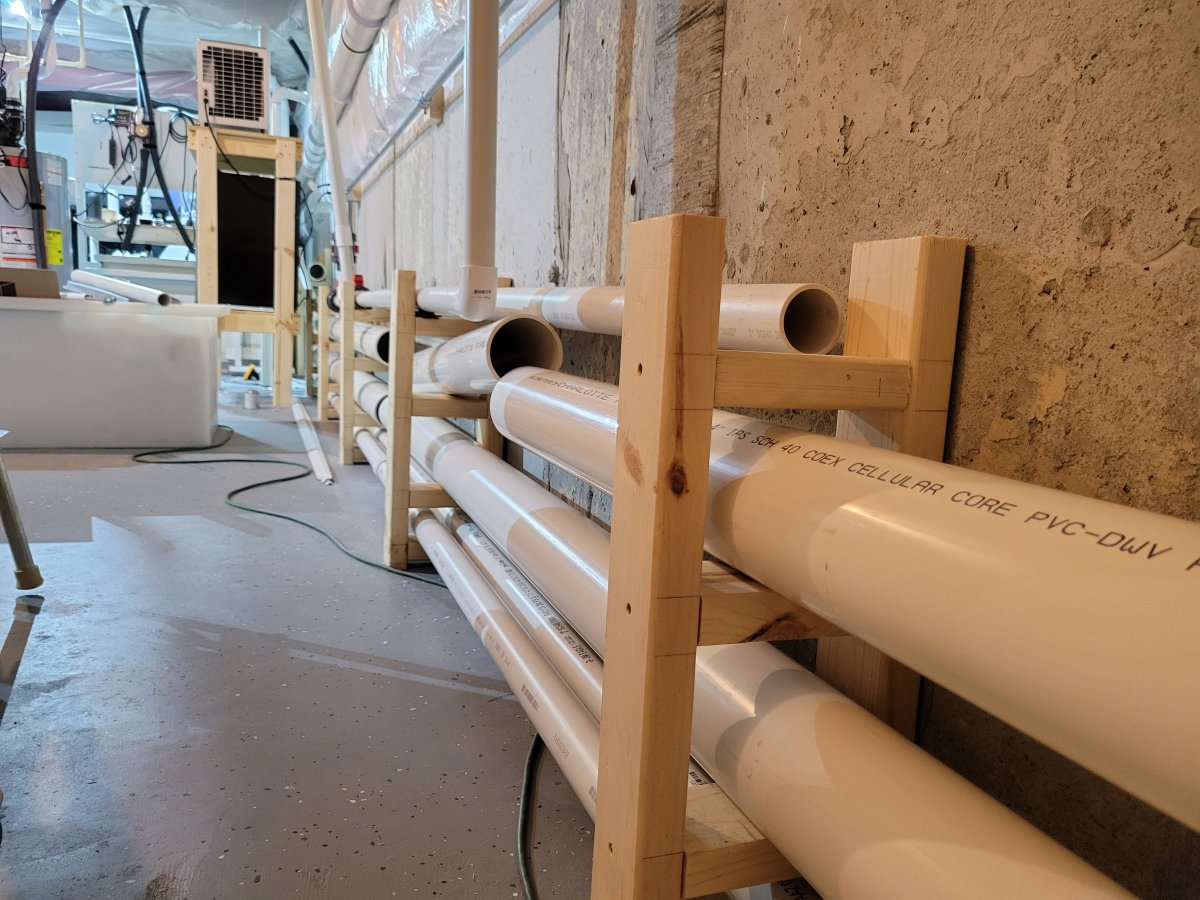 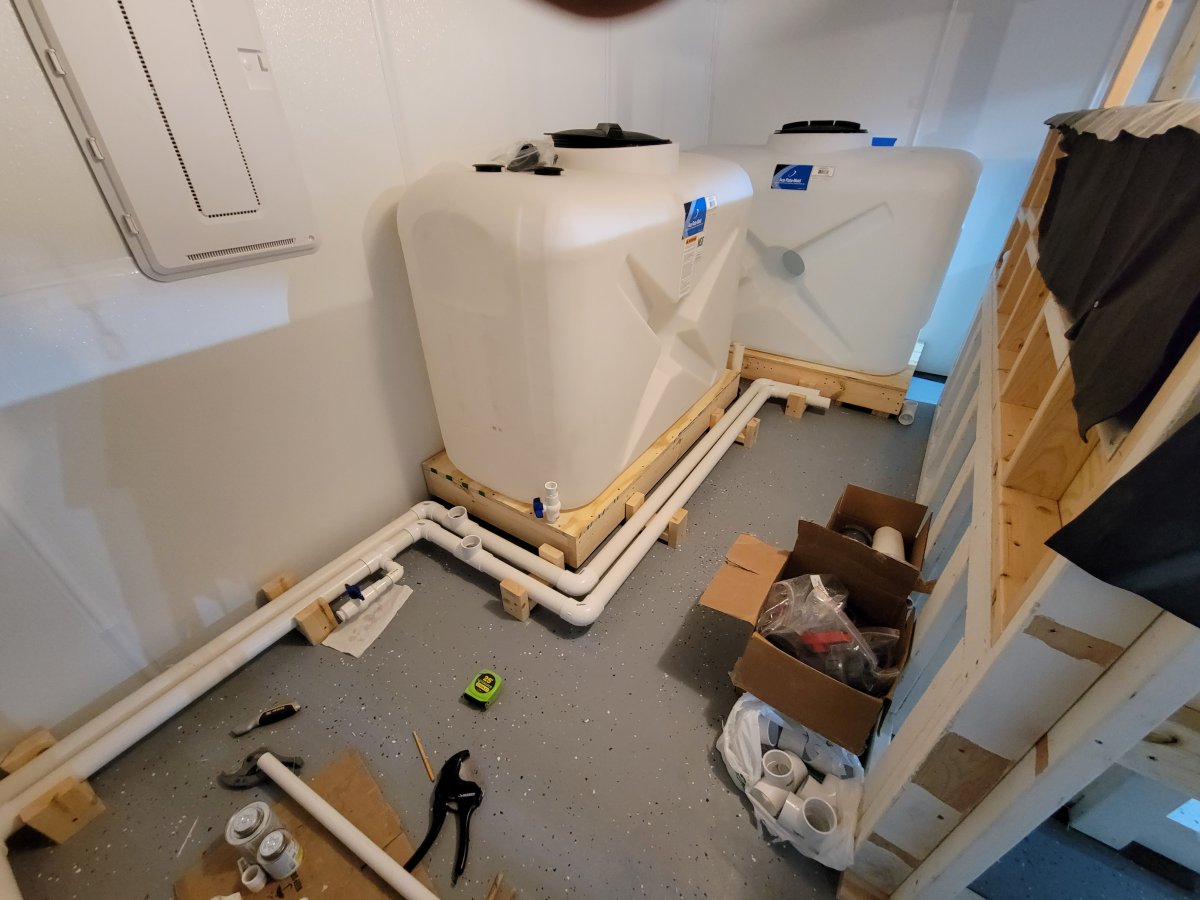 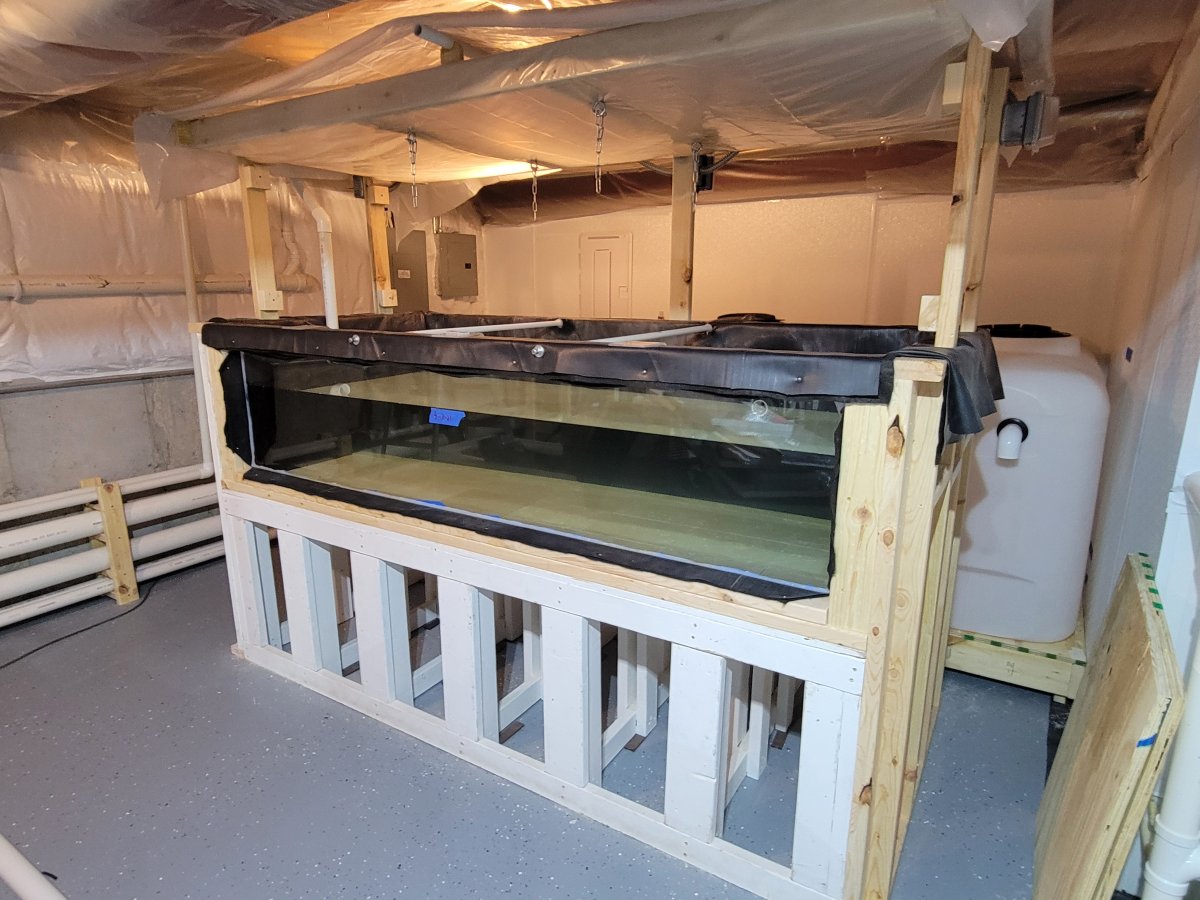 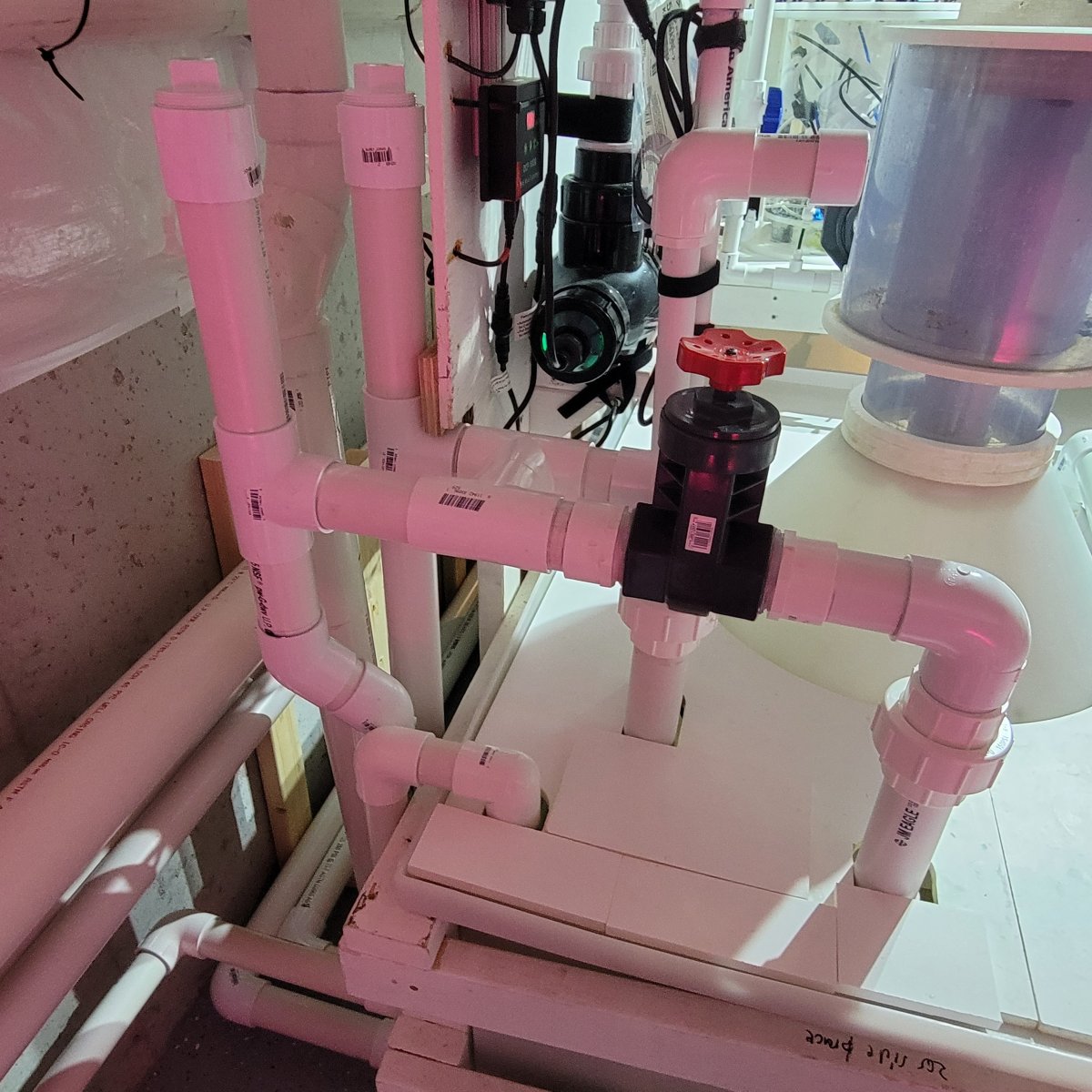 You know the plumbing is serious when it has to have its own support system. :0)
OP

McPuff said:
You know the plumbing is serious when it has to have its own support system. :0)
Click to expand...

Just got done dry fitting this. I still need to build the wood supports for the horizontal runs in the back. 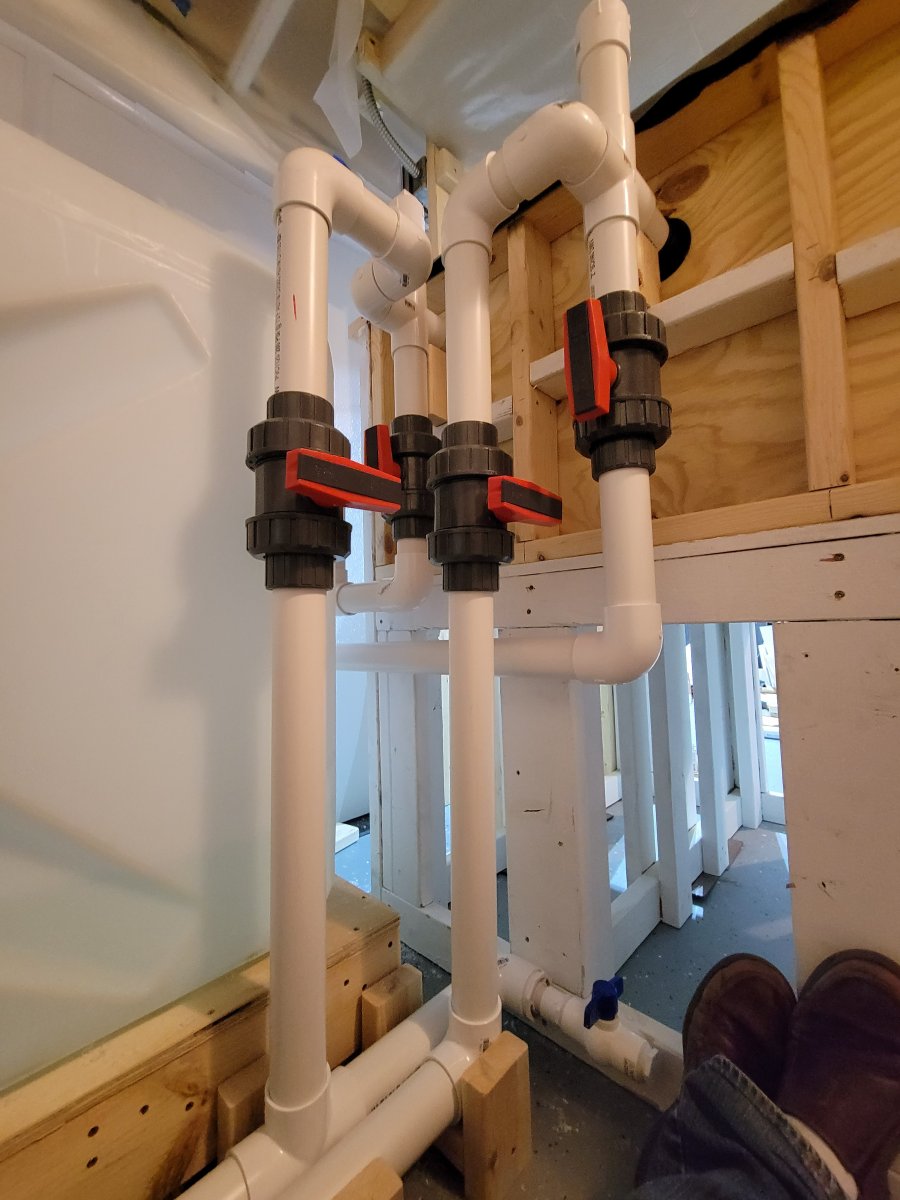 Finally all of the plumbing for the 400 and 2x250 gallon tanks has been glued in place. This is by far the most labor intensive aquarium plumbing I have done to date. 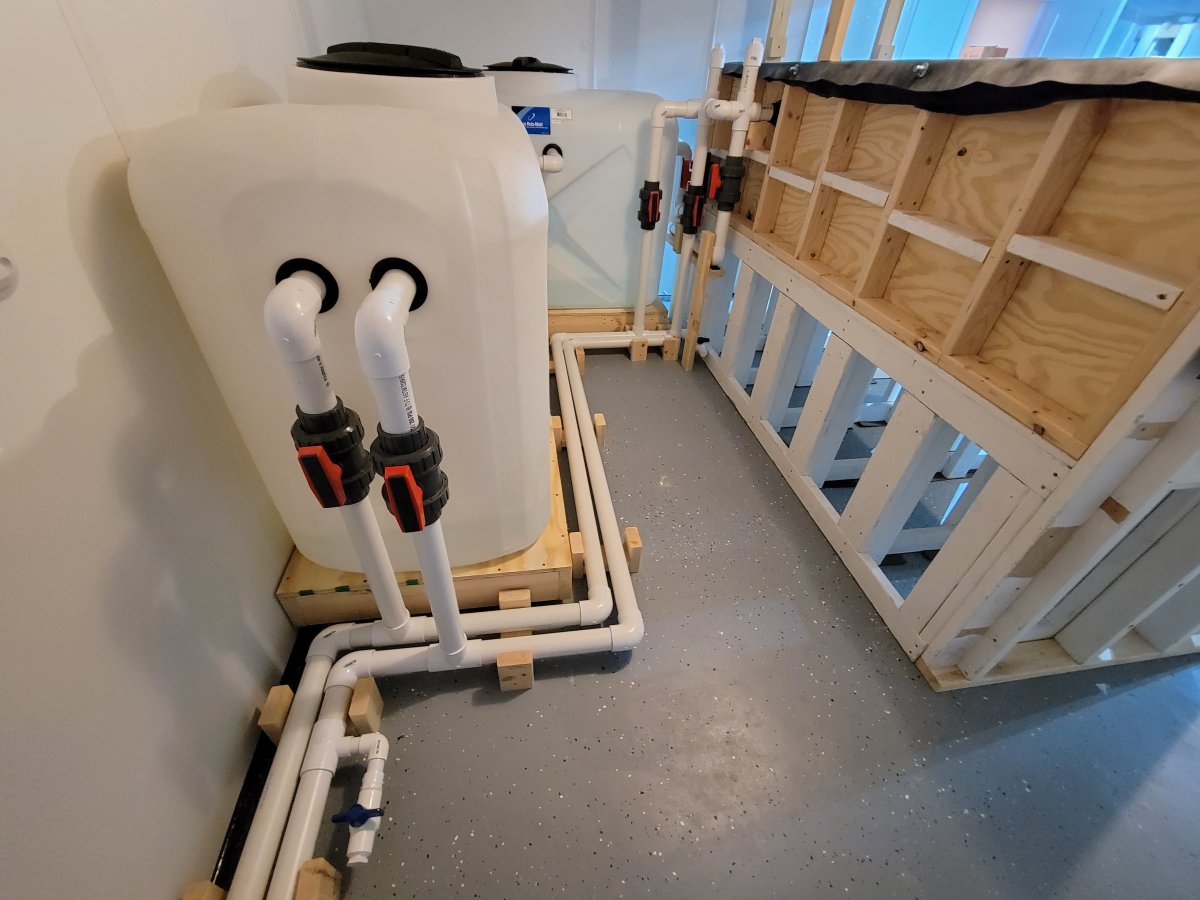