Anemone Dying -Unsure of Cause

Two weeks ago I bought a purple bubble tip anemone. It looked great when I put it in, but it has rapidly gone downhill. At the moment it is dying, if not already dead.

I have a lightly stocked 29gallon tank that has been up and running for 8 months. I have a juvenile coral beauty angel and two juvenile snowflake clowns. I have two hermits and a handful of snails as my cleanup crew. There is a 2.5 gallon HOB refugium with a ton of media, sand, and chaeto, as well as a HOB filter, but no skimmer. The light is a reef breeder photon V2. It's primarily an LPS tank and the lighting is tuned to BRS recommendations for LPS corals.

I didn't suspect nitrate or phosphate since none of the corals have shrunken, but I picked up a salifert test anyway...the reading was 0 yesterday. I also picked up a Red Sea foundation kit to test my Alk, Ca, and Mg. The dKH is 8.4-8.7, Mg is over 1600, and Calcium is between 450 and 500 according to Red Sea.

The fish and other corals have great color and are eating and active. What am I missing? I realize the magnesium is high, but is that known to cause such rapid mortality for an anemone? Is there some other water parameter I can check for? And most importantly, is there any chance this anemone could pull through? 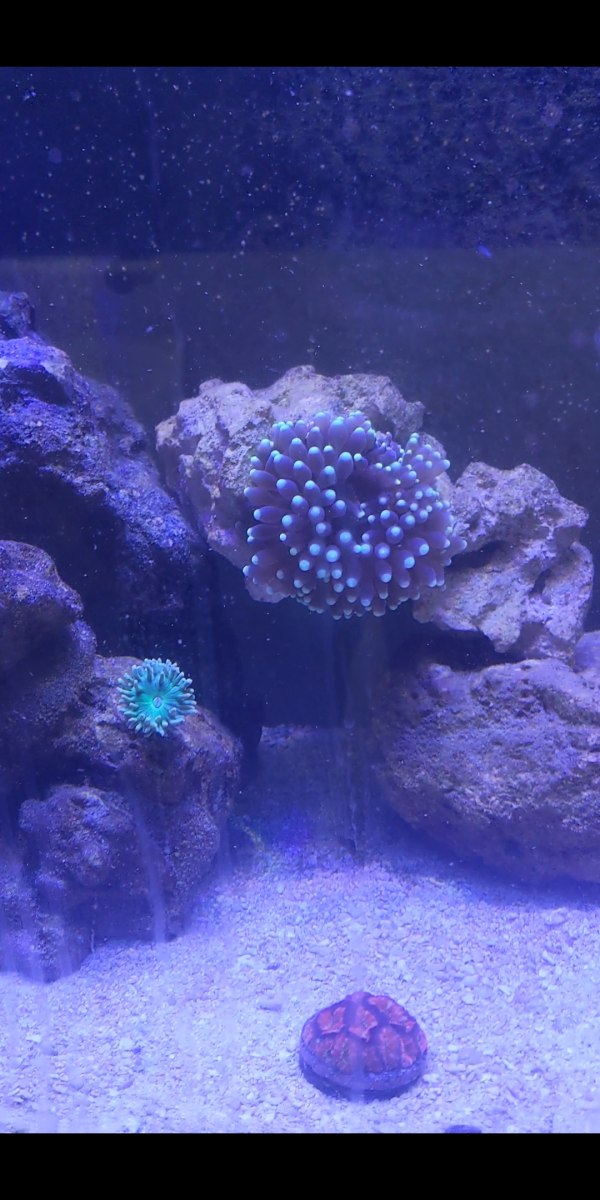 Pictures attached are from oldest to most recent. The most recent pictures were just taken a couple of hours ago. 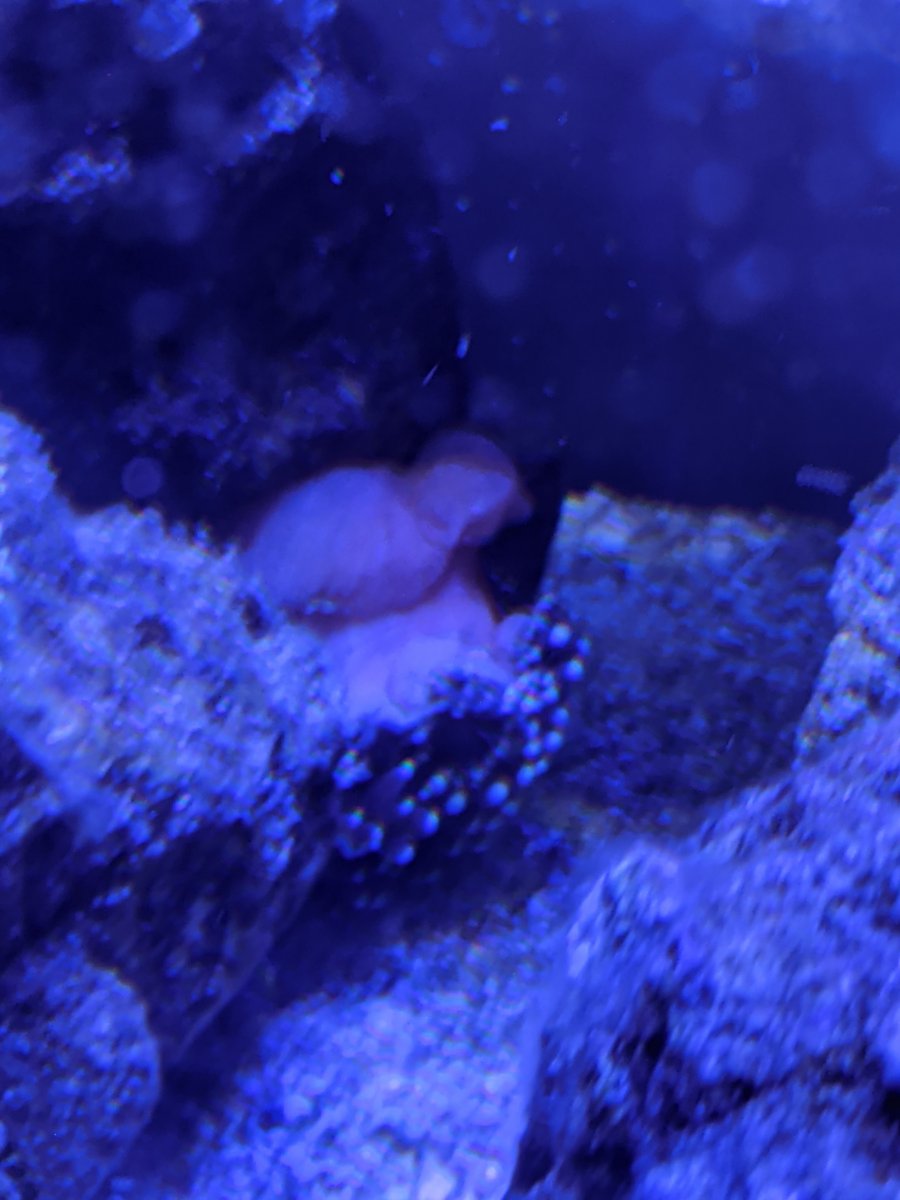 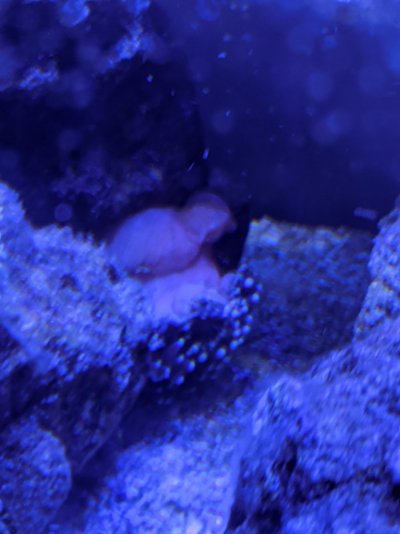 I don't think it's any of your parameters and it appears as thought it has moved from the first picture. Did in move itself? Is it's basal plate attached or just sitting unattached? If it has in fact moved, or moving it may appear deflated. Anemones that are dying usually have an open or everted mouth. Usually accompanied by noticable mucus secretion and deteriorating flesh or chunks of flesh coming loose in the water column. Maybe the picture isn't clear, but it doesn't look like it's dying in my opinion.
OP
C

Naso110 said:
I don't think it's any of your parameters and it appears as thought it has moved from the first picture. Did in move itself? Is it's basal plate attached or just sitting unattached? If it has in fact moved, or moving it may appear deflated. Anemones that are dying usually have an open or everted mouth. Usually accompanied by noticable mucus secretion and deteriorating flesh or chunks of flesh coming loose in the water column. Maybe the picture isn't clear, but it doesn't look like it's dying in my opinion.
Click to expand...

Here are the most recent pictures. For some reason they didn't attach the first time. This afternoon when I got home, the anemone had flopped over and the foot looked detached from the rock. I used a pipette to blow some water over it to see if it reacted, and it became completely detached at that point. The mouth appears to be open with a white bulge coming out.

It's now in a measuring cup hanging on the side of the tank so it isn't blown around in the current. 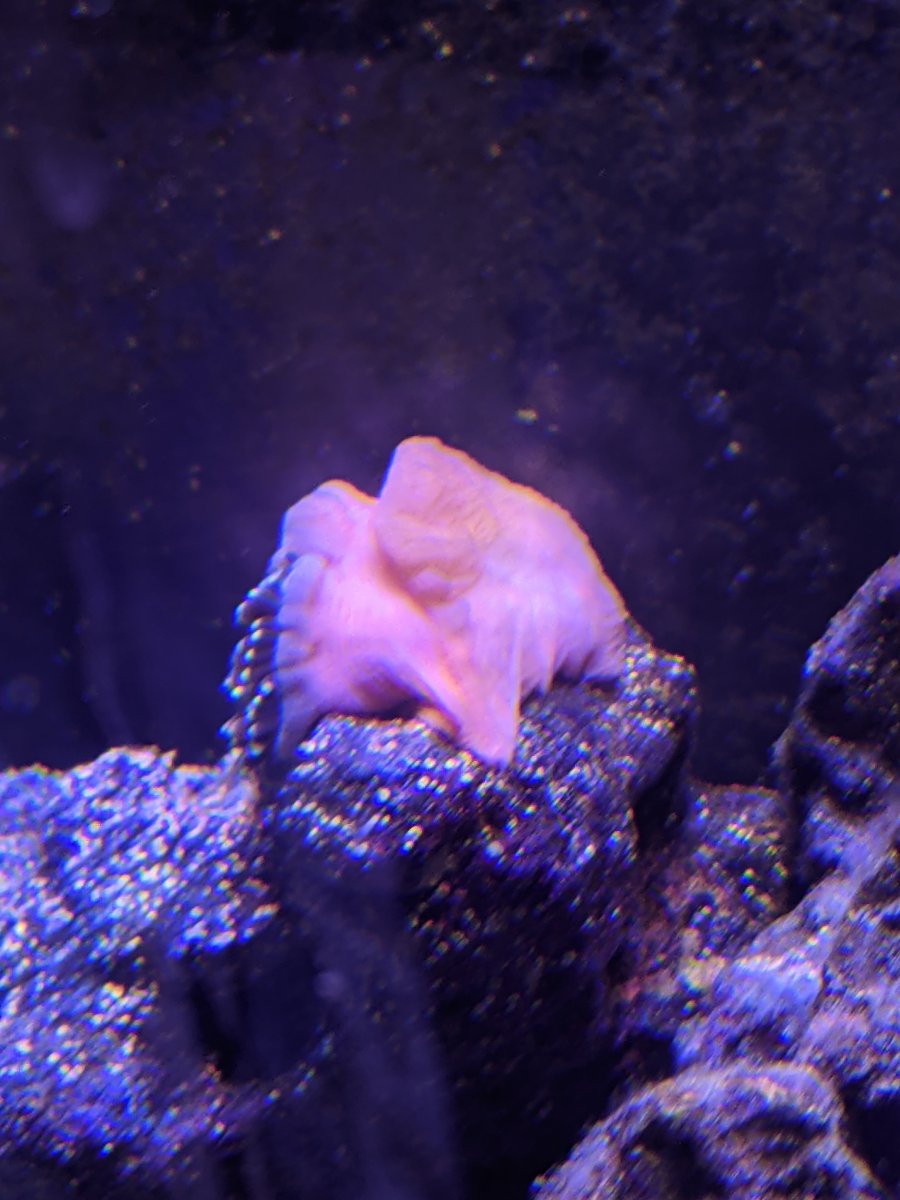 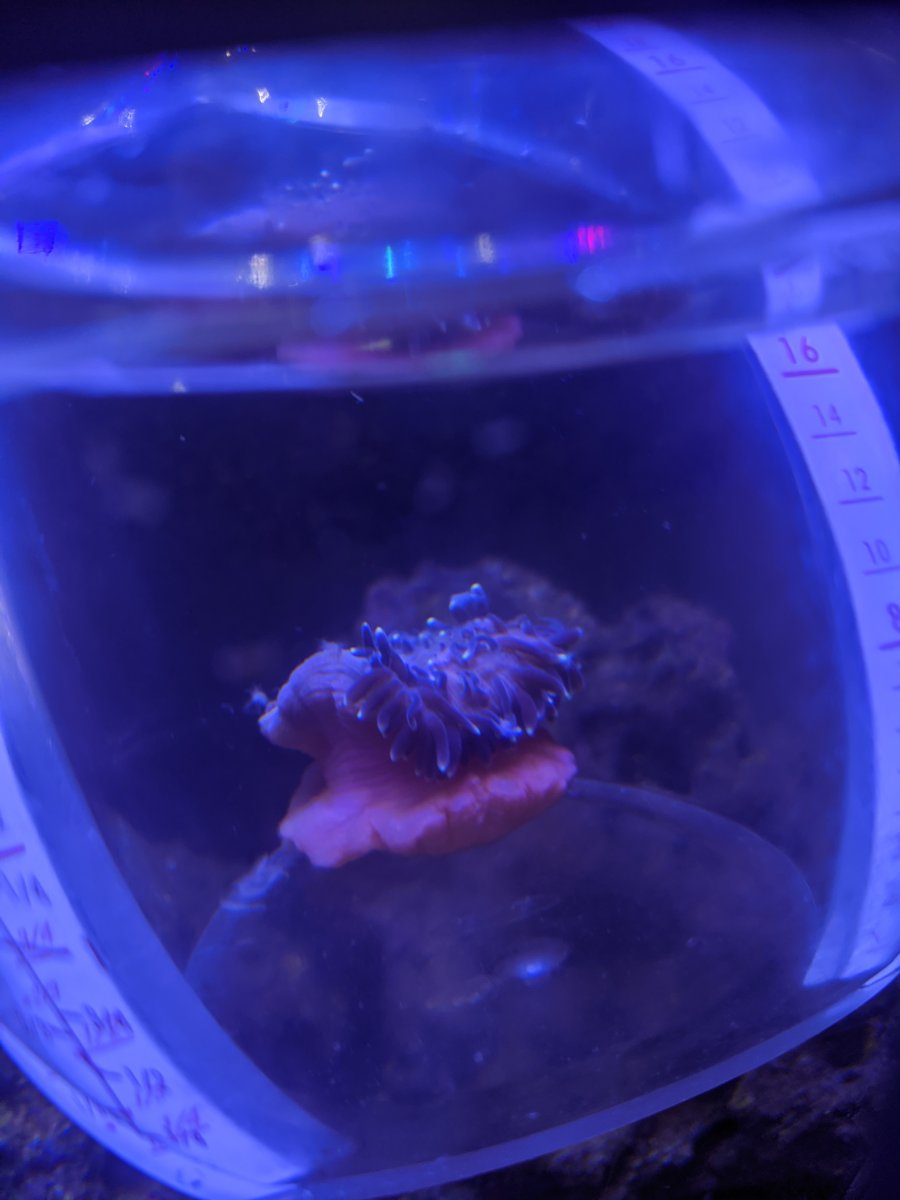 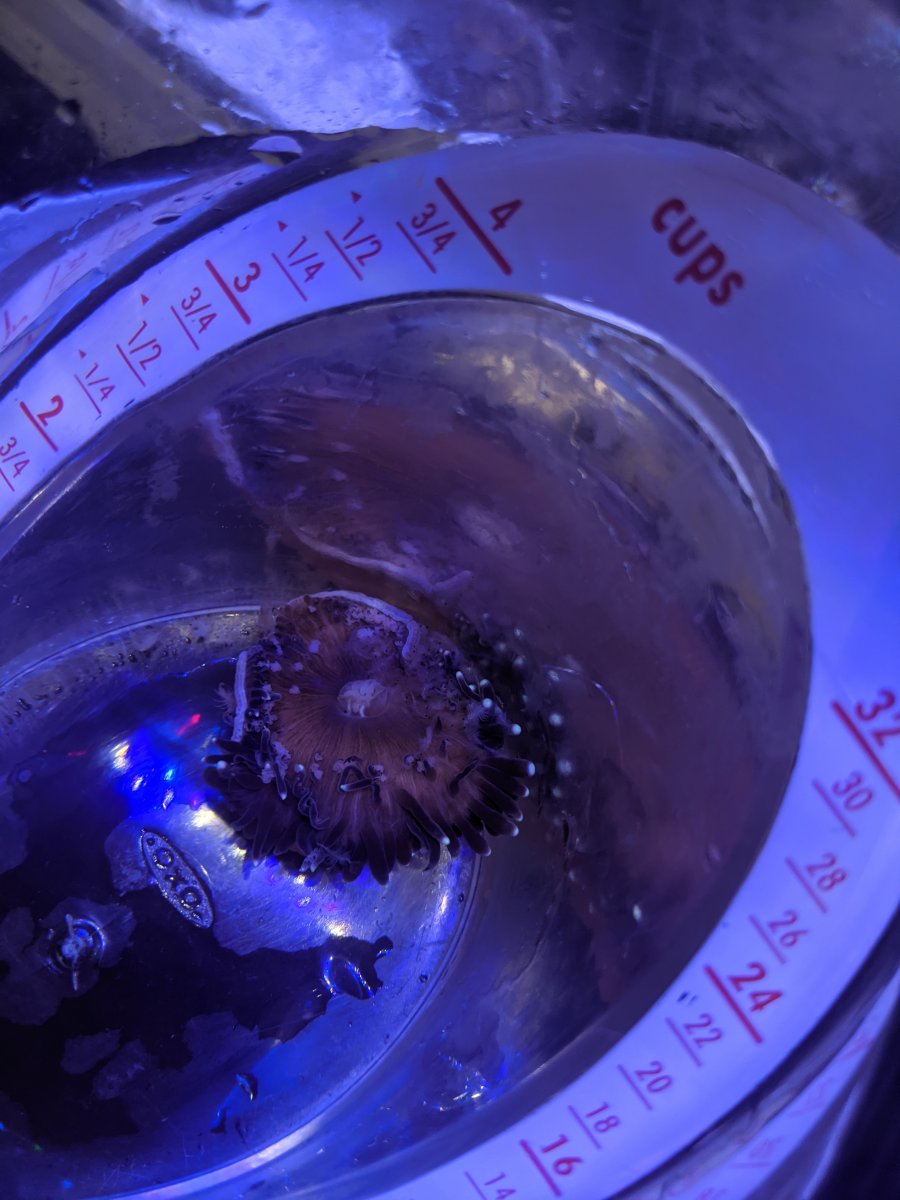 Anemones must undergo a maturation process. Many times they deflate and look half dead bc they are detecting a different water chemistry than what they came from.

When you poke at it, move it, you are just worsening the problem 10-fold. Like every time you F with it.

The thing is either going to live or die. Just let it be and let it figure it out. If it dies, not meant to be.

At this point, find a clear container and put some rubble rock in and put the anemone in the LID-LESS container on top of the rubble and place container on bottom of tank.

Quit messing with it. It'll either make a comeback or turn into mush.

If mush, at least it's in a container you can pull out when it's obviously curtains.

Did I read that right? 0 nitrates and phosphates? I still have a lot to learn on bta's but swore I read they need some nutrients in the water.

From the sounds of your latest description it may have a bacterial infection. You can read about using cipro which is a antibacterial to treat it here.

This is a re-post of what I wrote in ReefCentral on 3/09/2013 Many anemone keepers know, the collection and shipping process from ocean to local fish store (LFS) is a stressful event. Most host anemones do not survive this process without help, especially H. magnifica and S. gigantea. Other...

I do agree that sometimes new anemones will deflate as they adjust to their new environment but this should not happen for weeks straight or over and over and over again. Also, it detaching is not the normal either.

You may also want to consider getting your PO4 and NO3 measurable as this in my experience is good practice for the health of your whole reef.

The reefbreeder is a fine light for your application. I use 2 myself. Do you know what your par is by chance? Light could play a part but im leaning towards bacterial because of the inflation/deflation, open mouth and detachment.

Easy it just me or it it a lot easier to feed a bubble tip anemone vs a ritteri anemone?

S
EMERGENCY Rock anemone spawning but will it cause a crash