So I need a little bit of help with the programming of my apex. I built a three stage acrylic container where I can have RO/Salt Water Mix/Kalk Mix. All three containers are behind a single solenoid. I have a sensor on each container letting me know when the container has run out of water(mix) and a float switch so that the container won’t overflow. I’ve had float switch go bad on me, I want to use the solenoid as protection. I want the solenoid to turn on for a period of time and then turn off and remain off.

The issue that I’m having is with the PMUP. When the container runs out of water, air goes inside of the PMUP and even if the container fills up with water, the PMUP won’t pump water due to the air in the motor. I have to suck the air out through the hose and the PMUP starts working again.

I’m trying to write a code that when the water sensor is opened, to stop the pump and to open the solenoid to fill the container with water.

So I have a sensor, a virtual outlet and of course an outlet for each chamber. What I have programed and re-program and program again trying different logic; was that if the water sensor is opened, it will turn on the virtual outlet and keep it turned on for a time period until the container is filled again. Trying different things, I just left the outlet as basic as if switch on then on with no DEFER or no MIN TIME. That seems to work best but still not what I need. The issue that I’m having now is when the virtual ATO outlet is on, it has a DEFER and doesn’t allow the PMUP from stopping, so it keeps the pump running until it runs dry and then when the container is filled with water the PMUP won’t pump water due to the air in the pump.

I was thinking of using the WHEN command to see if I can manually turn off the virtual outlet and then turn it back on another way (which I’m not familiar how to set it back to automatic; I think that may be a bit out of my scope of programming…

Here’s what I have so far.

If Sw_RO OPEN Then ON

If Sw-Low CLOSED Then ON

If Sw-Hig OPEN Then OFF

If Output Vir-Ro = ON Then ON

If Output Vir-Sal = ON Then ON

Again, The issue that I’m having is when the PMUP runs out of water, it turns off, but I think air goes into the pmup and when the container is filled back up with water, It won’t pump water out again. I have to suck water out through the hose pulling the air that’s in the pump in order for the pump to continue to work.

Hope this is not so complicated to you all as it is to me….. 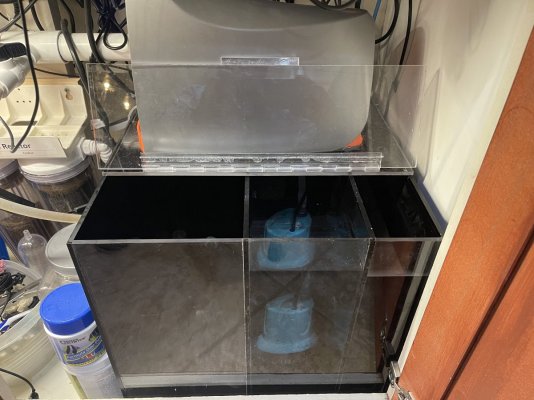 I could probably help, but your description of your setup is very confusing. Could you possibly sketch up a diagram of each chamber showing the name(s) and placement of each sensor, where the PMUP and solenoid are placed, and a more clear description of the whole setup? For example, you said 3 chambers behind a solenoid...does water flow from one chamber into the next chamber? I just don't understand what you're trying to accomplish.
OP
J

SuncrestReef said:
I could probably help, but your description of your setup is very confusing. Could you possibly sketch up a diagram of each chamber showing the name(s) and placement of each sensor, where the PMUP and solenoid are placed, and a more clear description of the whole setup? For example, you said 3 chambers behind a solenoid...does water flow from one chamber into the next chamber? I just don't understand what you're trying to accomplish.
Click to expand...

Well, it doesn't make sense to me either... lol

I have one selenoid coming from the filter. I want to use that as a false safe in case a float switch fails (Which I had one failed on me once) I also have float sensors on each canister at the bottom. That will tell me if the chaimber is empty. The Salt mix, is no issue, because I don't have any other outlet using that pump, so if I code that if that pump is on and the float sensor is opened, then I could turn it off and there's no issue. The issue is with the ATO. Because there are two Virtual Outlets, one for the ATO and one to re-fill the chaimber, if I configure the ATO-Virtual (Virtual Outlet) to turn on and run for 2 mins. If the ATO is currently pumping water, and that chamber runs out of water, the vir-RO (Virtual Outlet) should kick in and turn off the PMUP. But the ATO-Virtual outlet has a Min Time which keeps the pump on for the remander of the 2 mins.

The issue is, if the PMUP pumps all the water out, it gets filled with air. Apex will open the selenoid and fill the chaimber back with water as it's programmed to do so, but the pmup won't be able to pump any more air because it has air inside of the motor. I have to suck out the air and then the pmup will start to work again. So what I'm trying to do is when the SW-Ro float switch opens, immediately turn of the pmup so that chamber won't empty all the way and the PMUP won't suck in air. That way when the selenoid opens and the chaimber is re-filled with RO water, the pump will continue to work.

Hope this makes sense. I tried removing all of the defers and min time with no success.

Water does not flow from one chamber to the other. They are seperated by acrylic walls. What I wanted to do is minimise space by creating something that's more efficiently and takes less space while maximizing on the processes. Like a reservoir, water change and kalk dosing. Went from three seperate tanks taking a lot of space, to a small cube. The smaller chamber will contain 4 Gals of Ro, the Middle chamber will have 5.5 Gals of Salt Mix, and the bigger has 10 Gals of Kalk mix. I don't want to mix them as they are all being used for its' own purpose.

From your diagram we can see the devices and fluid lines
- Please Verify / Correct / Fill In info to fully explain
Assuming the float switches are values (mechanical) verses switches (electrical) please confirm?

Water Line Solenoid - <Opens to provide tap water when a certain programmed time of day occurs >
--- Line solenoid is wire connected to a break out box port and triggered through programming ?

Sensor Kalk - <Triggers when section is low on solution >
--- Sensor is wire connected to a break out box port to trigger water line sensor to open?
--- Is sensor lower than dosing tube end, if so trigger would happen after fluid is to low to dose?

Sensor SW - <Triggers when section is low on solution >
--- Sensor is wire connected to a break out box port to trigger water line sensor to open?
--- Is sensor lower than pump, if so trigger would happen after pump runs out of fluid to pump?

Sensor RO - <Triggers when section is low on solution >
--- Sensor is wire connected to a break out box port to trigger water line sensor to open?
--- Is sensor lower than pump, if so trigger would happen after pump runs out of fluid to pump?

How do you maintain correct mixtures in the SW and Kalk sections when water is added?

DOS Line Kalk - Connected to Peristatic Pump for dosing>
--- Pump is wire connected to what to trigger operation?

My first thought is why are you using "Min Time 002:00 Then ON" for your PMUP? Why not just let it run until the float switch senses the correct water level? For example:

The two timers in this example perform specific tasks:

Min Time 030:00 Then OFF -- After the water has refilled, wait for at least 30 minutes before being allowed to turn on again. This prevents it from running too frequently with just tiny refills, helping to prolong the life of the pump.

This code allows your Sw_RO sensor to prevent the PMUP from sucking air.
OP
J

That is pretty correct. I have three mechanical float switches on the top (but because they have failed on me in the past I added a selenoid before them for safety) I have float sensors that are connected a breakout box letting me know when they are low on water. The pmup, bigger pump and dose rode are all about 1" above the float sensor.

My issue is not the bigger pump, it's the pmup getting filled with air and not being able to start again. If the PMUP only had one outlet, it would easier to program, but there are two virtual outlets one for ATO and one to refilled the RO chamber. But the ATO is the one that keeps making the PMUP running every several seconds when the float sensor turns from open to close.

Suncrestreef:
I see your logic and will try the program now. Thanks.