@AquaticLifeProducts I picked up a used 24" hybrid fixture. Where can I buy the hanging kit? I am looking on your site but am having trouble finding it.

Is there also a tutorial for hanging the hydra 26?

PugsAndFish said:
@AquaticLifeProducts I picked up a used 24" hybrid fixture. Where can I buy the hanging kit? I am looking on your site but am having trouble finding it.

Is there also a tutorial for hanging the hydra 26?
Click to expand...

Old setup .....and new setup with the dimmable hybrid (still need to do some wire/cable management). 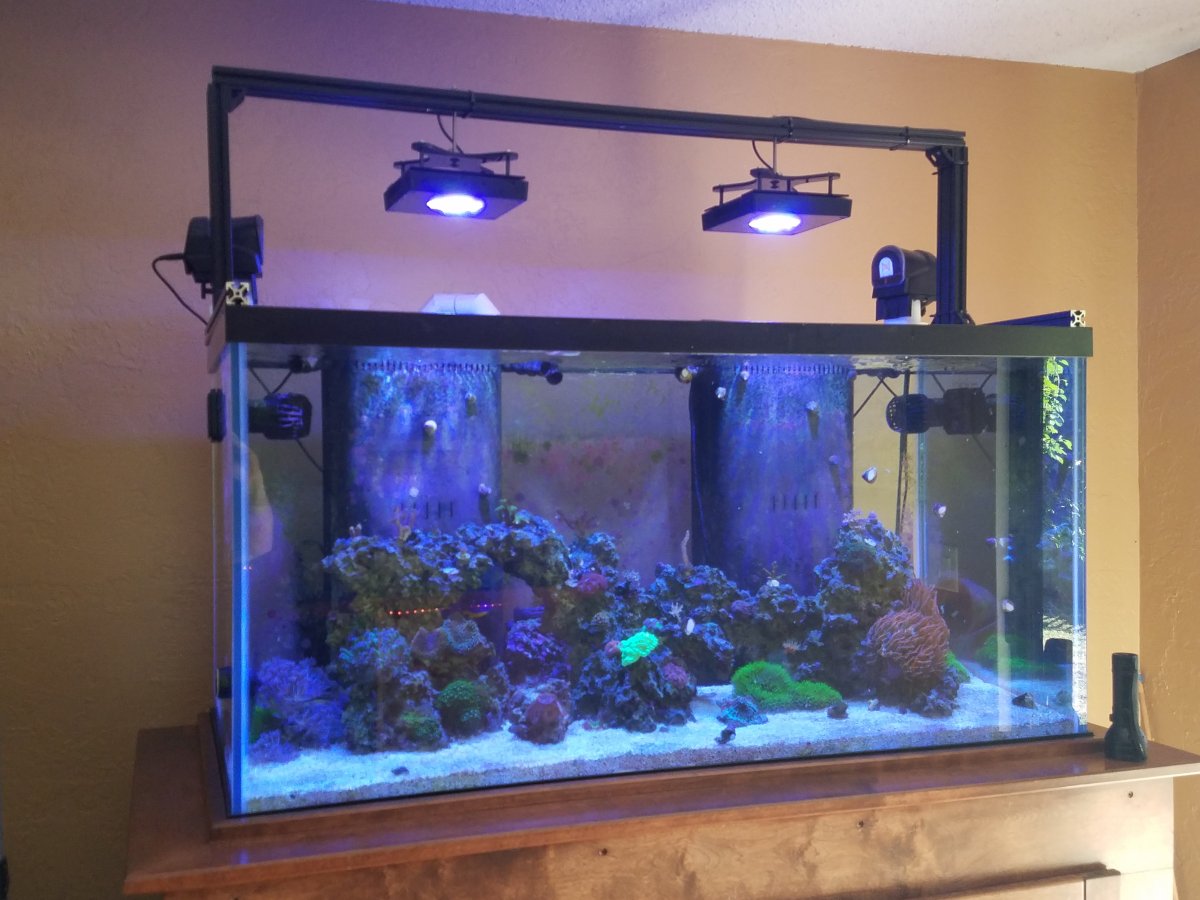 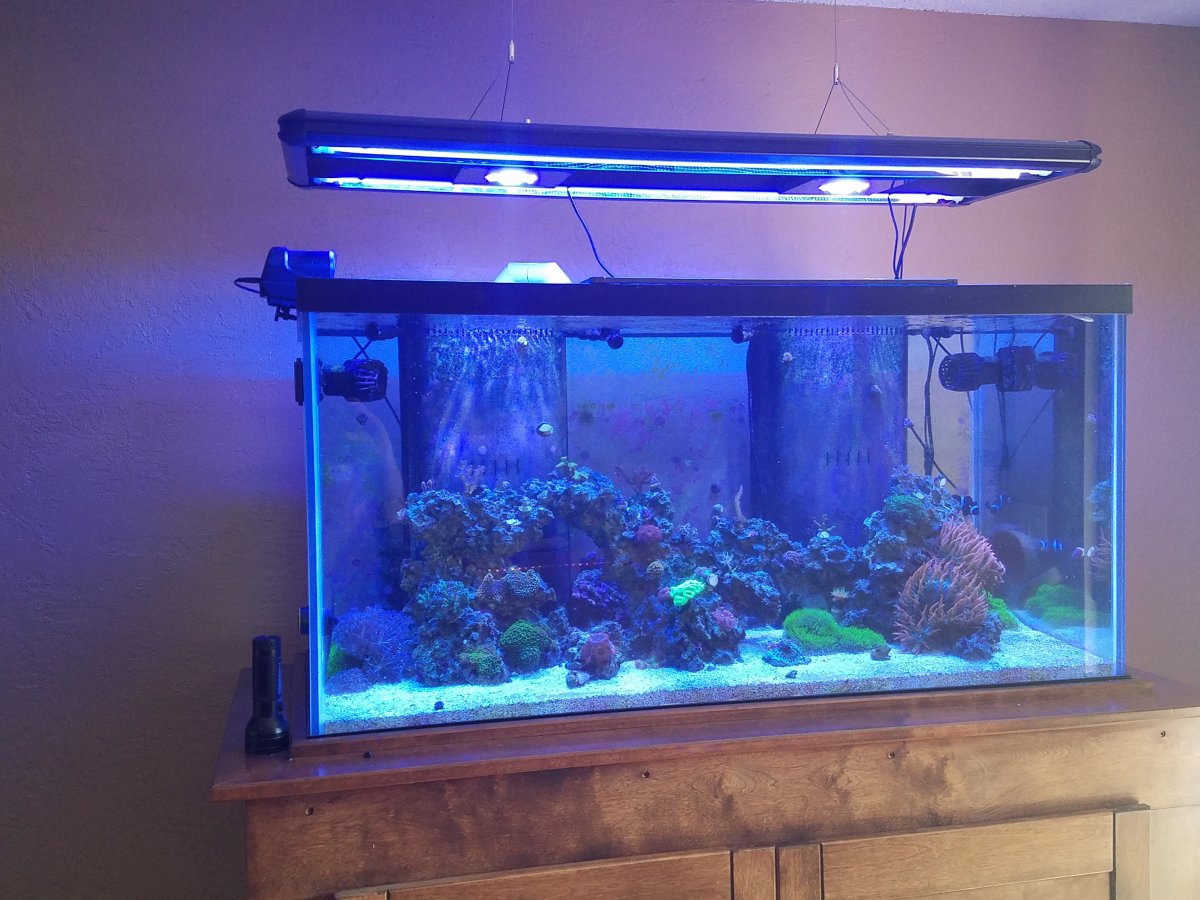 Hi, has anyone got pics of GHL Mitras mounted to this fixture?
Thanks

You need the 19.5" mount rails / plates kit for Mitras support / clearance, unless buying it from GHL Germany @AquaticLifeProducts
M

About ready to pull the trigger on the new DX18 hybrid. What are folks running here over a 4' tank? 36" or 48"? And are you happy with it? I'm leaning towards the 48" over a predominantly SPS tank but not sure if that is overkill.

I should add, I have a 24" on my frag tank running 3 B+ 1 actinic with an AP700 that's super dialed down (repurposed). Love it on that tank too, and it's where all my mini acro colonies are. When water parameters aren't dipping, they have been thriving.
R

Ok - so now that I have the new dimmable hybrid installed, it has been brought to my attention that before I use the dimming functionality, the T5 bulbs should be broken-in by running at 100% for 50 hours plus. Now that the fixture is hung, how can I do this without blasting the corals to death? Any opinions and thougts? Pictures of setup a few posts up.

Just set up the new 48" DX18 dimmable fixture with the floating wall mounts. Overall, I'm very satisfied with the new setup. The fixture feels very well built and got my par exactly where I wanted it. The floating mounts are great and I love having the ability to easily raise and lower them while maintaining the same clean look. If you've followed this thread for long, you know that Dave has polled and asked what everyone wants and what would make the fixture better, and it shows. The cord setup is much better than the non dimmable version and this fixture was clearly well thought out. The cord is plenty long enough for my application, and there are no connection points that would be exposed to water. Having said all that, there are a couple minor issues so far:

1: My main issue if that five of the six brackets that were included to mount the LED's to the fixture are just a hair too long (less than 1mm). The problem is, since the fixture is very sturdy, it is impossible to get the front and the back of the brackets to sit flush in the grooves at the same time. I currently only have the front side of the brackets screwed into the T5 fixture. I tried moving them to different sides of the fixture to see if it was uneven but no luck. One bracket fits perfectly and slides back and forth in the track as intended. The rest are not as secure as I'd prefer, and the LED's are now slightly un-level. I would imagine I just got a bad batch since I had not heard this complaint before.

2: The white wall bracket coating has already melted off where it comes in contact with the light housing. Not a big deal though since you would never see that part of the fixture anyways. I wouldn't have even noticed it if the light hadn't slid towards the wall when it melted causing the front of the fixture to droop. I readjusted it and it has stayed in place since.

3: As mentioned before, using the floating wall mount, the fixture can only be moved about 3.75" off the wall which I would imagine will be a deal breaker for people with tanks wider (front to back) than about 22-24". It worked well in my case but it does sit about 1/2" closer to the back. The bracket does support most of the weight of the fixture so I can see why it was designed that way.

Despite those few problems, the lights serve their purpose by putting out great diffused light and the fixture and wall mount looks nice and clean. I'd buy it again for sure. Well done, AquaticLife!

I overlayed some PAR readings on an old picture of the tank (Reefer XL 525) with 3 AI Hydra 26HD's. 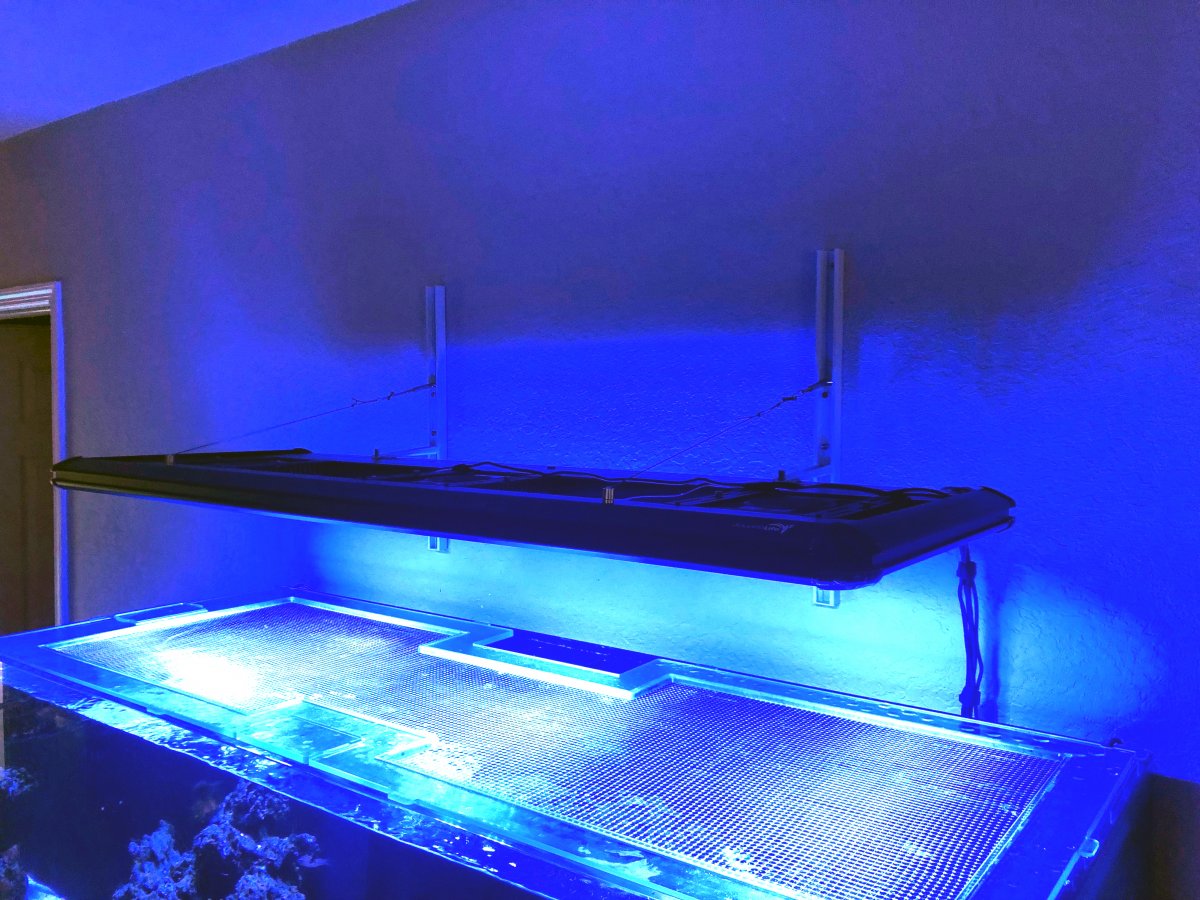 I'm sure Dave @AquaticLifeProducts would be able to help you with those brackets not seating properly.
C

Kyl said:
I'm sure Dave @AquaticLifeProducts would be able to help you with those brackets not seating properly.
Click to expand...

I'm sure you're right, they're great about product support. I'll reach out to him and see if there's anything they can do.

rbarr110 said:
Ok - so now that I have the new dimmable hybrid installed, it has been brought to my attention that before I use the dimming functionality, the T5 bulbs should be broken-in by running at 100% for 50 hours plus. Now that the fixture is hung, how can I do this without blasting the corals to death? Any opinions and thougts? Pictures of setup a few posts up.

They don't have to be ran for 50 consecutive hours. Just 50 hours over so many days before you dim them.
C

Reached out to Dave with @AquaticLifeProducts per @Kyl 's recommendation and they immediately went to work on a fix. Dave sent out new brackets for me, which I installed today. Now all the brackets seat perfectly in the channel. Amazing product support, thanks again Dave!

Dave's the reason I bought the 24" fixture for my frag system. He's been very helpful and made possible the way I went about mounting both of mine.
OP

FernandesReef said:
Hi, has anyone got pics of GHL Mitras mounted to this fixture?
Thanks
Click to expand...

Sorry missed this post. Yes @Kyl is correct the 19.4" brackets will allow the Mitras to fit in the middle, flush with the fixture. Also, in the interest of keeping the fixtures standard worldwide we are looking at a new bracket to secure the Mitras to the 18" width fixtures. This is a new bracket we are tooling now. Small changes will be made to not cover the display and the buttons on the sides. So the "ear" will be narrower. 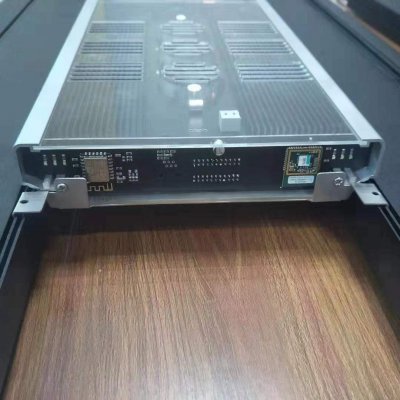 Looking to add the DX18 to my tank I have a Reefbreeder Photon V2+ 32". Will these two be comparable or will I need the extension?
OP

The DX18 is a fixed width fixture due to the wires running front to back of the T5.

I believe the Reefbreeder fixture is wider than 7.0" which would require the 19.4" width fixture brackets to fit the fixture in the hybrid.
T

Not sure if this has been asked before but do you guys still sell the mount for the light like you have in the first post?

I am looking get getting a 60" with 4 gen4 pros and all i can find is your universal mounts. 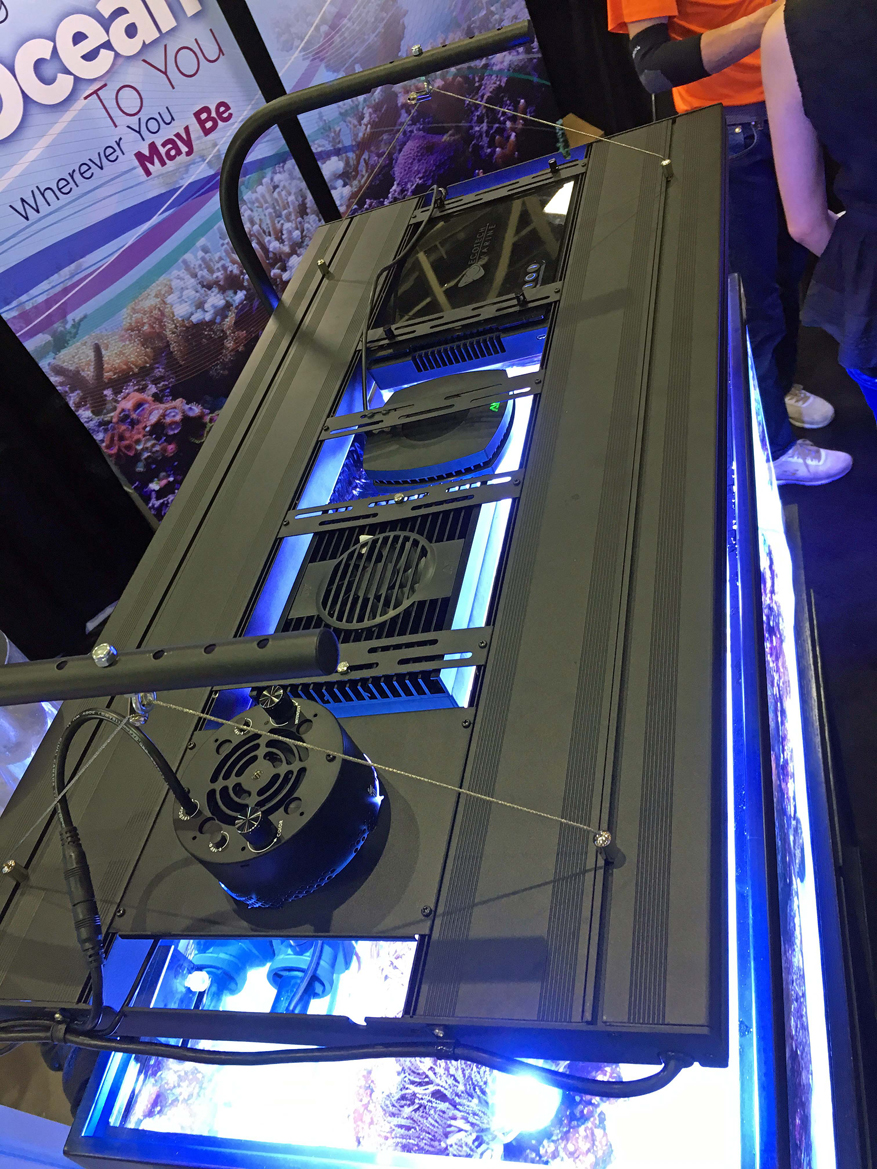