At a loss, high nitrites and nitrates in established tank

@Aqua Man also tried that, zero everything and also tried 2 different salt brands: Red Sea Coral Pro and Aquaforest Reef. One thing I didn't do, but at this point I don't know if it's worth it, is to test RODI (or a fresh mix with salt) with an ICP.

Maybe a slightly different approach to the problem would help. It's an option and I'm not saying it's the best. I'm not trying to troubleshoot the source at first because you just want a good looking, easy to manage tank with the livestock you want growing and healthy and I think the below is the fastest way to get there with the least amount of work (avoiding a full reset).

Chasing a problem can get very frustrating. We've all been there (heck, I'm still there with algae), but there have been a lot of changes to your system in the last 2 years - DSB to bare, carbon dosing, bio media, lots of products. Reef tanks to our understanding thrive best on stability.

The one thing you said works is water changes. Not surprising as wc is the best fail safe maintenance action. All reef tanks until you hit a certain 'natural' stability (levels nutrients, livestock, rock, bacteria, etc) wc are going to be the rule.

I'm not proposing a full 'reset'. What I would suggest is to do a series of large WC over several days to get your nitrates to around 10 ppm but not much below that (at least initially). The soft corals should take it as will your fish (if you're concerned and very patient you could do it over longer time).

Two reasons, one - that is a very high level. And while some reefers have very high levels the vast majority of reefers are most successful when nitrates are low. (I'll stay away from a specific number for long term because that's your preference based on style and method you want). And the second is to get a good handle on where the nitrates are coming from and what the rate of increase is. Nitrate test kits are hard to measure small changes above the lower ranges of nitrates.

Once you have 10 ppm. I would keep the skimmer but skip all products (except for Alk/Ca and GAC) and just manage via wc for a couple of weeks/months. It's 20 gallon tank so a 4 gallon weekly (if you're managing with your high levels at 20% you should be able to manage same at low levels) is very reasonable.

Measure your nitrate increase and how fast it happens. How many ppm per week/per month is it increasing? Then slowly adjust your tank management methodology for those levels. Change amount or type of food - wait a couple weeks, see if that improves, change nutrient mgmt slowly. Pick a method you prefer, carbon dosing, refugium, bio-pellets and slowly adopt it while continuing WC. Rely on the water changes until you find the method that works and that you like. As the tank hits stable levels over time then you'll be able to slowly reduce the amount of WC over time (as a lot of us find we can do over time). Adding multiple methods of nutrient control is fine, but only add after you hit a stable amount of nitrate increase.

You may decide to stick with WC only - that's a valid option for 20 gallon tank and I've seen many tanks managed successfully that way.

Best of luck and keep us updated on your tank regardless of how you go forward with this issue.

I’m out, no troubleshooting from me further on a months old pic. I put honest work into helping at 4 am without knowing the pic is months old and getting looped like that won’t do now that it’s eight am.


Nitrite and nitrate have 100% nothing to do with this issue. The best option for you is to stop making choices for the tank and hand the reigns over remotely to someone, follow their method two months and don’t intuit or change one single thing they recommend


do not take snippets of guesses and try to apply, simply yield to someones method for two straight months providing honest updates and it’ll be fixed.

*do not begin again with sps

start with common corals on their plan. Work up to lps that are directly fed when feeders are out, early in the morning and drive mass back on corals that work well. Sps last.

re focus on feeding and water changes like cpr, not testing, bulk work protein in and then water changed out for months and that will bring it back for sure.


** private message the tank coach regularly, don’t do a thing they don’t indicate to do, pure remote running will fix that tank once you leave behind nitrate concerns and focus on protein in/ out vs protein in and leave to rot, or withhold protein due to nitrate maximums


feeding and water change cpr is exactly how to make use of a bare bottom reef to put on mass vs lose mass, exactly like a human exercise regimen.
Last edited: Jul 14, 2021

Just reminding folks what was pointed out earlier: if there is even 1-2 ppm nitrite (not a concern), you will get false high readings for nitrate.

I'm not sure there is a substantial problem that needs solving, but it is hard to know for sure.
OP
A

@Quietman that sounds like a good plan, I managed to get the nitrates back to around 30 with water changes but never managed to get to 10, I will try to force the system more and go back to a more manageable regime.

@brandon429 man thanks for helping at 4am but I stated clearly in the post that the picture was outdated and explained the reason why I used that pic when asked about it so I don't see the reason to be so disappointed. Also, I am out of options but I can assure you that I have my fair experience in reefing and that almost all the trials that I've made have been mantained for at least 2 months or more to see if they were bringing results and have not been random trials as you may have intended. Thanks again for your help.

@Randy Holmes-Farley yes, one of the issues in testing is just that since nitrate tests rely on nitrate reduction into nitrite it's impossible, to my limited chemistry knowledge, to distinguish between having only high nitrites or having both nitrates and nitrites high...as you said it shouldn't be an issue but it somehow is because stuff dies

Aleph said:
@Randy Holmes-Farley yes, one of the issues in testing is just that since nitrate tests rely on nitrate reduction into nitrite it's impossible, to my limited chemistry knowledge, to distinguish between having only high nitrites or having both nitrates and nitrites high...as you said it shouldn't be an issue but it somehow is because stuff dies

Well, if things are dying, the nitrite is not likely killing things, but rather the result of dead things present.
OP
A

Well, that's a good point, and if it's just that I'm back to: why is stuff dying? I guess the aggressive water changes is my best bet right now

Aleph said:
I'm back to: why is stuff dying?
Click to expand...

Back to basics. Temperature, salinity, flow and light. Verify as best we can and keep stable. Pick a salt maker you like and stick with it for awhile.

Ever get a PAR reading? What lights are you running?

Soft coral do fine in high nitrate environment. A lot of LPS also.
OP
A

@Aqua Man will do that, for reference I check salinity and temperature at every water change, flow is handled by a Jebao SW4 almost at full power and as lighting I have a Coral Box Moon LED Plus, 10 hours photoperiod with 3 hours peak intensity at 30% whites and about 80% blues.
Never got the chance to get a PAR reading unfortunately.

Thanks everybody for the suggestions!

Aleph said:
Thank you all for your help! I will try to reply to everything...

@brandon429 here is a pic of the tank a couple months ago: 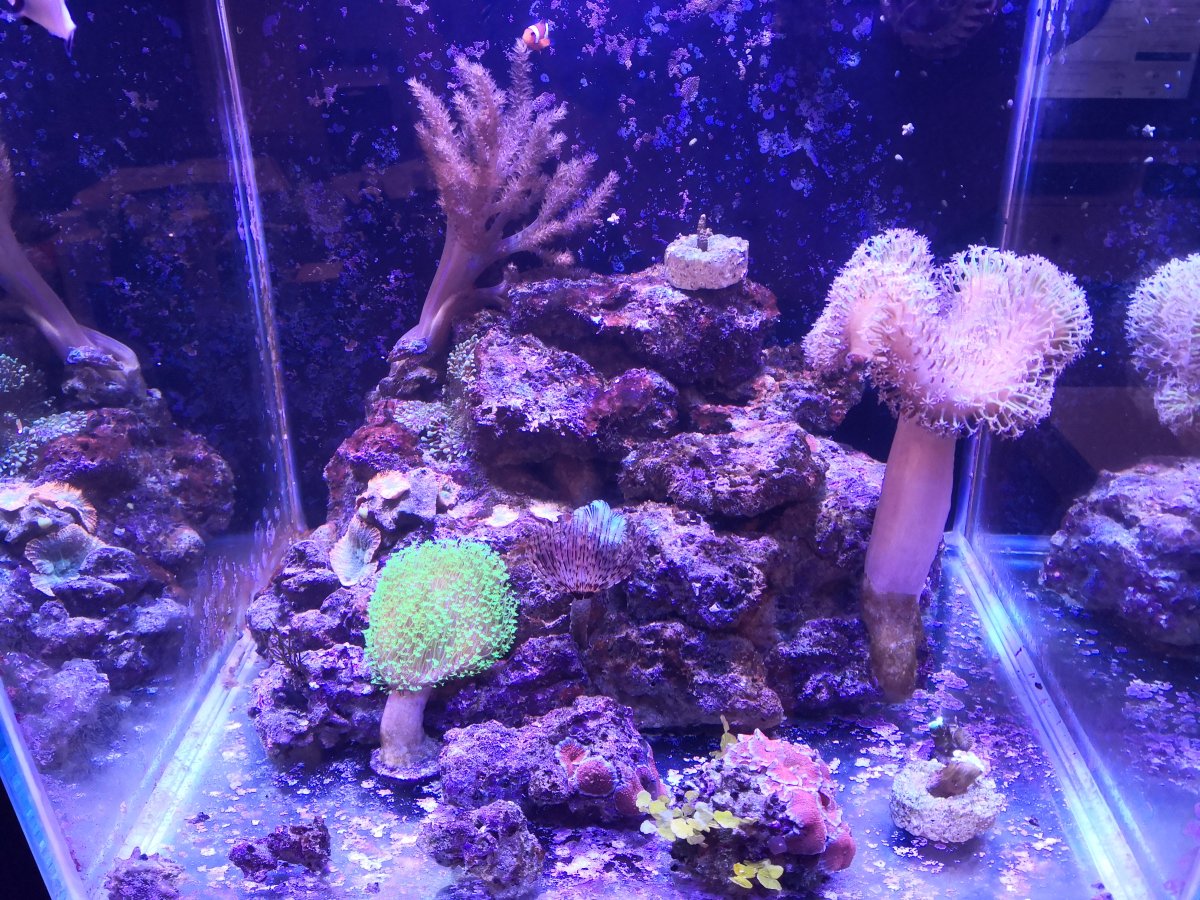 I would gladly ignore nitrite and nitrate values if the tank did well but the issue is that corals are not fine at all, since the picture I've lost almost half the corals you see here, and the remaining survivors are not doing fine.

@BostonReefer300 about the food, something I forgot to add is I also tried different brands of pellets/flakes and it did not make any change (Hikari, Haquoss, Ocean Nutrition and others)

@Jekyl I agree, that's exactly my problem, I can't find the source at all!

@Azedenkae the 50 to 200+ reference was misleading, that was the entire range I observed during these 2 years but in the last months it has been stable at 200+ (over the measurable range of all test kits, even with a 1:2 dilution)
I've also tested the RODI water I use for changes (I use a 5 stages unit) and it was at zero both in nitrates and nitrites.
I don't remember the weight of live rocks I have in the display but you can see the volume in the picture above. In my sump I have Siporax and Pond Matrix, about 1l of each, and about 2.5l of Siporax, Pond Matrix and nameless spheres from Amazon in the Donovan's nitrate destroyer.

@Dan_P I agree about the possibility that some of the things I tried may have been too rushed to conclude their ineffectiveness but most of the things I did, I did for like months, especially carbon dosing. Is there something in particular that you think could have worked if given more time? Also, unfortunately, I am not making this up and I also think we are missing important information, I just can't think what it could be.

@Nano sapiens I forgot to add that I don't have sand, I had a DSB when I first set up the tank but it din't work so I removed all the sand and added more dry rock after about 6 months from the first set up. Could the rocks have had organics stored inside that they are still releasing into the tank? At some point I was thinking of some heavy metal release but the ICP showed nothing above the range.
Click to expand...

Aleph, not knowing the sequence of events that has led to the high nitrite and nitrate levels might be preventing us from giving you more help. Totally up to you if you want to invest the time.

The narrative I am working with is limited on details and goes something like this. Your new aquarium was running fine and something caused you some anxiety and you wanted to fix the problem. I assume you were unhappy with the nitrate level. You then embarked on a work plan that involved a series of attempts to fix the nitrate level. You likely did one fix after another, switching strategies every moth or so, Somewhere along the line the coral began to sicken and the nitrates went through the roof, though it might actually have been soaring nitrites that made it look like nitrates were high.

@Dan_P yes, except that I usually let pass a couple months for most significant changes and actually what led to the discovery of high nitrates and to start changing things was poor coral health, not the other way round (I never tested for nitrates regularly).

Anyway, I think I will keep it simple, double check everything and perform aggressive water changes for a while, let's see what happens!