So I've decided to go back to school because I want a career change, which means I'll be in one place at least a few years. I've decided to take this opportunity to tear down a couple freshwater tanks to free up the space for a reef tank. The biocube's going to stay up, but it's more or less "finished" at this point, aside from regular water tests/maintenance, and I wanted a new project. Plus I want to make use of my biology degree, so here we go.

I figured I'd make this thread now while I'm waiting for Saturday to arrive, which is when I'll be picking up my (used) tank, so here we go.

120gal (4x2x2) tank + stand + 30gal sump. Dual internal overflow boxes and returns. Will have to figure out the return pump but I'm thinking a Sicce 2.0? Maybe 3.0; I'll calculate the weir flow rates once I get the tank.

90 gallon with 30 gallon sump. Eshopps HOB overflow since I'm not sure if the tank is tempered or not, and I don't really want to risk it.

Lighting: Photon 48 v2 - This should be enough to grow all corals from what I've seen. The LEDs seem pretty spread out too so hopefully shading is not an issue, but if it is I can always supplement with more LEDs or t5s. Plus, I love that the light comes with mounting legs that I don't have to spend extra money on.

for flow I'm thinking 2 IceCap gyres, 1 on each side wall pointing at each other and alternating ramp up/down to create a back&forth wave action.

I'll be running some kind of algae in the fuge, along with some rocks for extra filtration. Currently thinking ulva + red ogo, but maybe also pom pom gracilaria too. I wonder if the ulva found off the coast is the same stuff sold for reef tanks?

Going to be mostly dry rock, but I'll move over some rubble from my biocube to jump start the cycle. I also have leftover microbacter7 which will be going into that tank too.

Caribsea special grade and marco rock. Aiming for about 2 inches of sand because I plan on having a couple halichoeres wrasses.


Now for the fish. This is a work in progress. UPDATED LIST FOR 90 GALLON - STRIKE THROUGH = TAKEN OFF THE LIST; QUESTION MARK = MAYBE IF THERE'S ROOM TOWARDS THE END OR I CANT GET OTHER FISH:
5 lyretail anthias? - probably not unless I can't get the wrasses I want
blackcap basslet
royal gramma?
diamond goby
golden head sleeper goby
purple firefish goby
starry blenny
lawnmower blenny?
bi-colour blenny
midas blenny? Is this too many blennies? I like blennies. lol.
melanurus wrasse
yellow canary wrasse
radiant wrasse
red-lined wrasse
white tail bristletooth tang - if not possible, then two spot bristletooth tang
yellow tang? two tangs too many for this tank probably?
bellus angelfish pair/trio
copperband butterflyfish - maybe? I'd like to at least try - maybe not... we'll see
Flame hawkfish? - probably add much later if I do since this guy might bug the shrimp
Dusky Fairy wrasse
lubbock's fairy wrasse
filamented flasher wrasse
McCosker's flasher wrasse

Boy this is a lot of fish huh? What do you guys think? I'm open to suggestions. List isn't set in stone for the most part, but I would like it to be moderately heavy stocked in the end.

That's one way to put it lol. I figure it's probably a fool's errand, but I'm willing to at least give it a try if there's a reasonable chance that it could work.

What is your career change?
OP

count krunk said:
What is your career change?
Click to expand...

I'm going back to school for software development. Oddly enough the thought of a 9-5 almost excites me lol.

Haha 8-5! But yeah just takes a good company and it's not bad at all

BelieveInBlue said:
That's one way to put it lol. I figure it's probably a fool's errand, but I'm willing to at least give it a try if there's a reasonable chance that it could work.
Click to expand...

Low bar goals are boring and baf for the soul.
OP

Not_Eeyore said:
Low bar goals are boring and baf for the soul.
Click to expand...

Hey the lower the bar the less the disappointment. Just ask my parents
OP

Lights have been shipped! Should arrive some time mid next week.

Anyone care to weigh in on the stock list?

I'm thinking of cutting the midas blenny and replacing it with a yellow coris wrasse. Is 4 halichoeres wrasses too many in a 4 foot tank? If so, what about 3 and some type of flasher/fairy wrasse?

I've also been thinking about the angels. I picked bellus angels because they only get to 7 inches, but from what I've read it still seems like a 120 would only accomodate a single specimen, not a trio?

I don't know. But I think if there is the swimming space and your filtration can keep up I say go for it

That's the issue though is I'm not sure if there will be in the long term. Short term it'll work for sure, but I prefer to plan things for the long haul. Maybe I'll just play it by ear and see what happens? Bellus angels aren't that common anyways so it'll probably be a few months before I even have the chance to purchase some.
OP

Scheduled delivery for the lights went from June 3rd to June 7th overnight.... what the heck Canada Post?????
OP

Hoo boy... 120gallon deal fell through. Now what... Not really looking to buy a brand new set up. Currently checking craigslist/facebook/local forums every few hours >.< Might have to settle for a 90 gallon. We'll see. Fish list is getting altered for sure. Will decide once I actually get a tank I guess. Blah *shakes fists* darn you, Murphy's law!

Don't settle, something used will come up
OP

count krunk said:
Don't settle, something used will come up
Click to expand...

Honestly looking at the space I have to work with it might be better to cut down on the fish list and go with a 90 gallon. A 120 would've been nice but it'd be a pretty tight fit, plus I'd need a lot of extra help to move it.

I guess I'll wait a bit and see what pops up.

Ok so I updated the stock plan to reflect the new, smaller set up (90 gallon).

Here it is again for easier viewing:

12 fish total. Seems like a good list for now. I might replace a flasher wrasse with a fairy wrasse, or just add a third fairy wrasse. May also add a royal gramma, but I'm not sure. 2 basslets in a 90 gal could be trouble. May decide to do a group of anthias, probably 4, though if I do, then I wouldn't be adding anything else. I'll most likely skip them, unless I have trouble sourcing/keeping the wrasses alive. We'll see I guess.

I'd like to add either a yellow tang or a copperband at some point, or maybe both. I'm guessing two tangs would be too many for this tank? I'll be buying a biota yellow tang if I do get one, and he'll be added well before the bristletooth, so maybe it'll work out? Not sure I'm willing to try though... Thoughts?

I think two tangs in a 90 will be fine. May need to use accilmation box/add when the lights are out.
R

Following this build as I’m currently in same planning stage. Question...is this many wrasse raise any compatibility issues or are they fine as they are different varieties. Find them to be great looking fish and would like to add a bunch to my build.
OP

count krunk said:
I think two tangs in a 90 will be fine. May need to use accilmation box/add when the lights are out.
Click to expand...

I was thinking of either adding a BIOTA yellow tang, which when purchased is under 2 inches, first and then a month or two later adding the bristletooth, or adding both at the same time. Basically going off the idea that even though the yellow would be added first it'd be so small that aggression shouldn't be an issue at all.


ReefingInTheBuff said:
Following this build as I’m currently in same planning stage. Question...is this many wrasse raise any compatibility issues or are they fine as they are different varieties. Find them to be great looking fish and would like to add a bunch to my build.
Click to expand...

From what I've read, it depends on the wrasse. I pick certain wrasses specifically because they're known to be less aggressive, using these two threads as a guide/reference. I also asked people in the wrasse lovers thread, and from what they've told me, 6 wrasses in a 90 gallon should be no problem with the species that I picked out.

The tank has officially landed! Decided to go with a 90 gallon marineland with corner overflow because I wasn't happy with any of the second hand tanks. Spent all day driving around buying stuff, and still haven't gotten everything. Oh well. Tomorrow I'll build the sump and begin aquascaping. Picked up 90 lbs of marco rock and some Aqua-Forest Stone fix. Should be interesting.

New tank, cleaned up and polished with microfiber cloth: 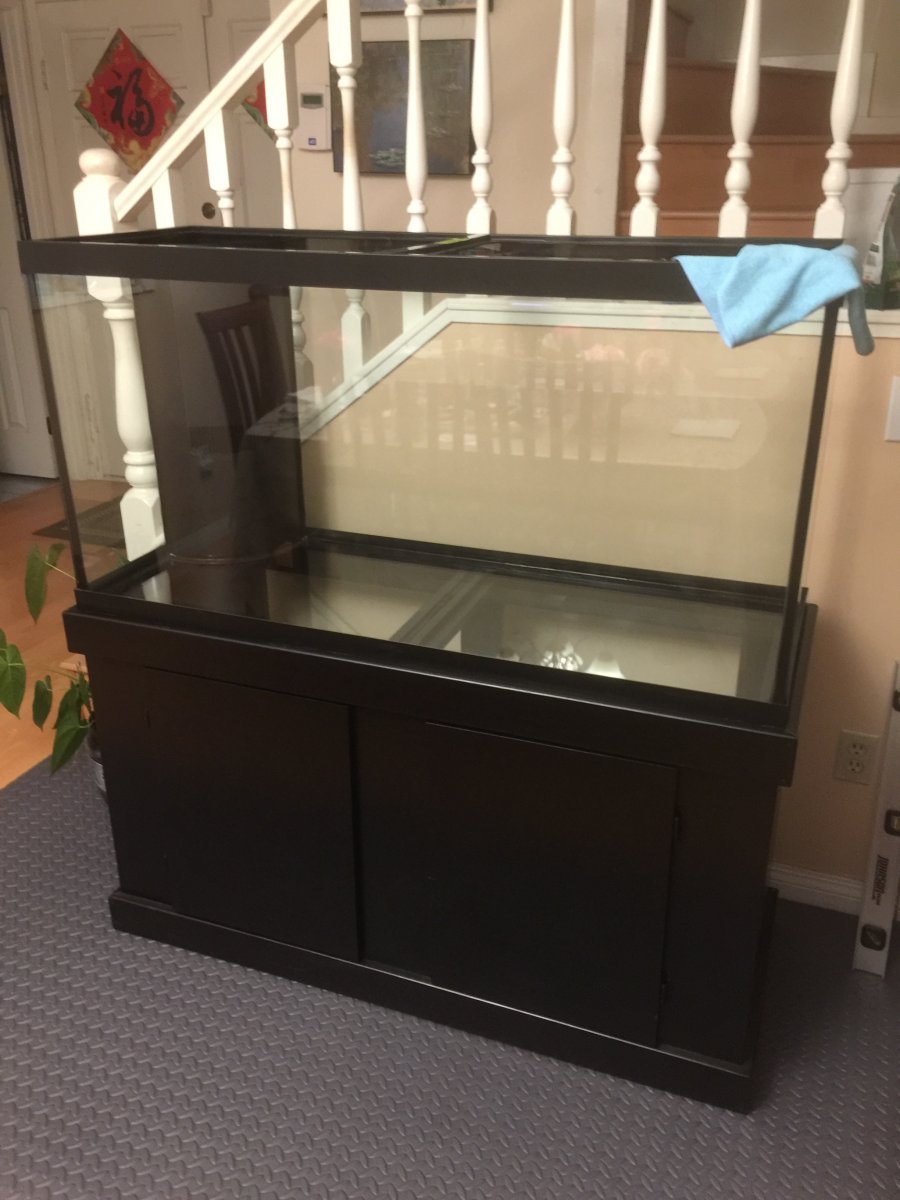