I have 4 year old diy 40g tank (24x24x20) that I made. I tore it down 16 months ago and replace it with a new diy 90g DT. OK, so now I've been cleaning up the old 40g in the garage and thought to myself, maybe I should consider setting the 40 up as a replacement for my 16g frag/holding tank (right side of the stand). This photo is from back when I was setting up the 16g tank a year ago. So plenty of room for the 40g on top with the 16g gone. But I don't want another tank with a sump. There isn't room for one. The cabinet under the 16g tank has a 20g tank used for ATO to both tanks and a chiller.

So here is the question. If the new 40g set up is going to be mostly local stuff (fish, gorgonians, RFAs & other local anemones, snails, crabs, cucumber, urcin, a couple stars, along with a frag rack or two for my cuttings from the 90g DT that go to the LFS, or new corals I don't have placed in the 90g yet, what is the best HOB filtration unit and the best HOB skimmer I can get? Cost isn't much of an issue, I want reliability. Example, the pumps in the AquaClear HOB filters are crap! I have one on the 16g tank that is less than a year old and it's already got impeller issues.

I'm open to any ideas and suggestions.

Wow, bad experience with AquaClear, that surprises me.
I’ve have three, still running past 15 years, with a new impeller every 3 years or so, they wear, then buzz a bit.

This tank running 4 years with AquaClear and Coralife HOBs, I changed nothing on either, but the air intake in the skimmer requires cleaning every two months.

Fine them easy to keep clean.
Skimmer on the right, aqua clear left. 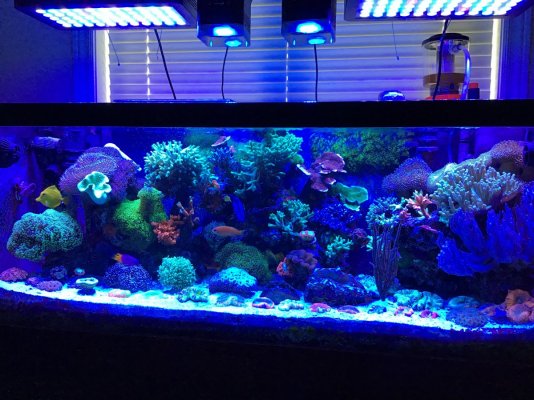 Aquamaxx hf-m is not bad. It's a hang on back filter with protein skimmer, a large filter media cup, and refugium/media reactor. The protein skimmer is just a build in version of Aquamaxx HOB 1.5 which uses Shark 1.0 (modified and upgraded Sicce pump). However, it doesn't do surface skimming.