wrz0170 said:
So the reflector will narrow the beam but just turn down the intensity. That’s easy enough!
Click to expand...

So I just wanted to share my experiences so far with the Hydros control system. I wanted something that could do remote monitoring and automation like ATO and feedings. I have just a Biocube 32 and thought if it would be too much for such a small system. Short answer, it’s not (so far).

I bought the Control 4 (C4) kit which comes with a 4 plug, WiFi power strip. A temp sensor and a Pinpoint pH Probe. I also got the Hydros Wave Engine (WE), their ATO, Rope Leak Sensor and an extra water level sensor. I also switched to an Octo Pulse 2 wave maker which plugs directly into the Wave Engine.

Physical setup was relatively easy as the cables are color coordinated. The fun part is both the C4 and Wave Engine are now part of a Collective. One power brick to the WE which powers the C4, the ATO, wave maker and all sensors and probes. This is done by using a command bus cable between the C4 and WE and using a “Terminator” plug. Control functions are now housed under one App.

I have an InkBird heater controller which is plugged into the WiFi strip. The heater plugged into the InkBird. The InkBird does all the heavy lifting of temp control and the Hydros is my backup. Hydros will shut the outlet down if it reaches the threshold temp that I set in the app. Hence the extra Temp sensor besides the InkBird.

The pH probe is self explanatory. Although it’s reading about .2 lower than what my Red Sea test show. To be fair, I did not calibrate the probe yet with the provided solution.

With the Octo Pulse plugged into the WE, it eliminates an extra cord and a control head. All programming is done via the App. I have two schedules; a day time and night time. The fish seem to like it. I catch them playing in the stream now and then.

The Hydros ATO is another plug in directly to the C4. The level is controlled by a small sensor. As a backup, I have it where if it exceeds 30 seconds, shut it down. I have just a simple 5 gal reservoir with their tiny pump and hose. Direct connect eliminates a plug and yet another control head.

WiFi feeder is nice as it feeds my 2 little piglets twice a day, 12 hours apart and automatically shuts down the return and powerhead for 5 or so minutes while the piglets eat. Then turns everything back on.

I will be adding the rope leak detector around the base of the tank stand when I get to it. If the unthinkable happens, it will be shutting things down with all the alarms and emails.

Will be adding my extra water level sensor to my reservoir to let me know when it’s thirsty. Also to protect the pump. I may add another on the very top of the tank as an overflow protection.

As you can see, all the plugs get filled pretty quickly. I left room on my control head board for expansion for whatever that may be. ie, XS, X2 new X3.

What I like: Setup was easy. Everything found my network right away. Setting up the collective was easy. Just follow their online instructions. Basic programming is easy as it’s just sliders and drop down menus. Advanced settings can be a little more tricky. I still have a lot of reading to do. Support is phenomenal. Their Forum and FB page is regularly monitored. If you have a question, it will get answered in a short time.

What I don’t like: Had a hiccup with my first Wave Engine. There are units floating around that have old firmware that can’t be updated. Submitted a ticket and had a new unit sent to me inside of a week. 2 day shipping. Send the old one back. It sucked having to draw the short straw on that one.

No light control yet. Right now the power strip is on and off.

Few wave makers and return pumps supported. Would love to get a DC return that is 1) supported 2) small enough to fit in the Biocube return chamber 3) and won’t blow my fish out of the tank with 1000s gph.

Power strip is a little finicky to setup but I got there. Also wish they had a few more outlets on the strip.

Make sure 2.4ghz is supported on your router. Little caution there.

Overall, it just sits there doing its thing; monitor and control. I look forward to see what they have in store for expansion and support for other products. 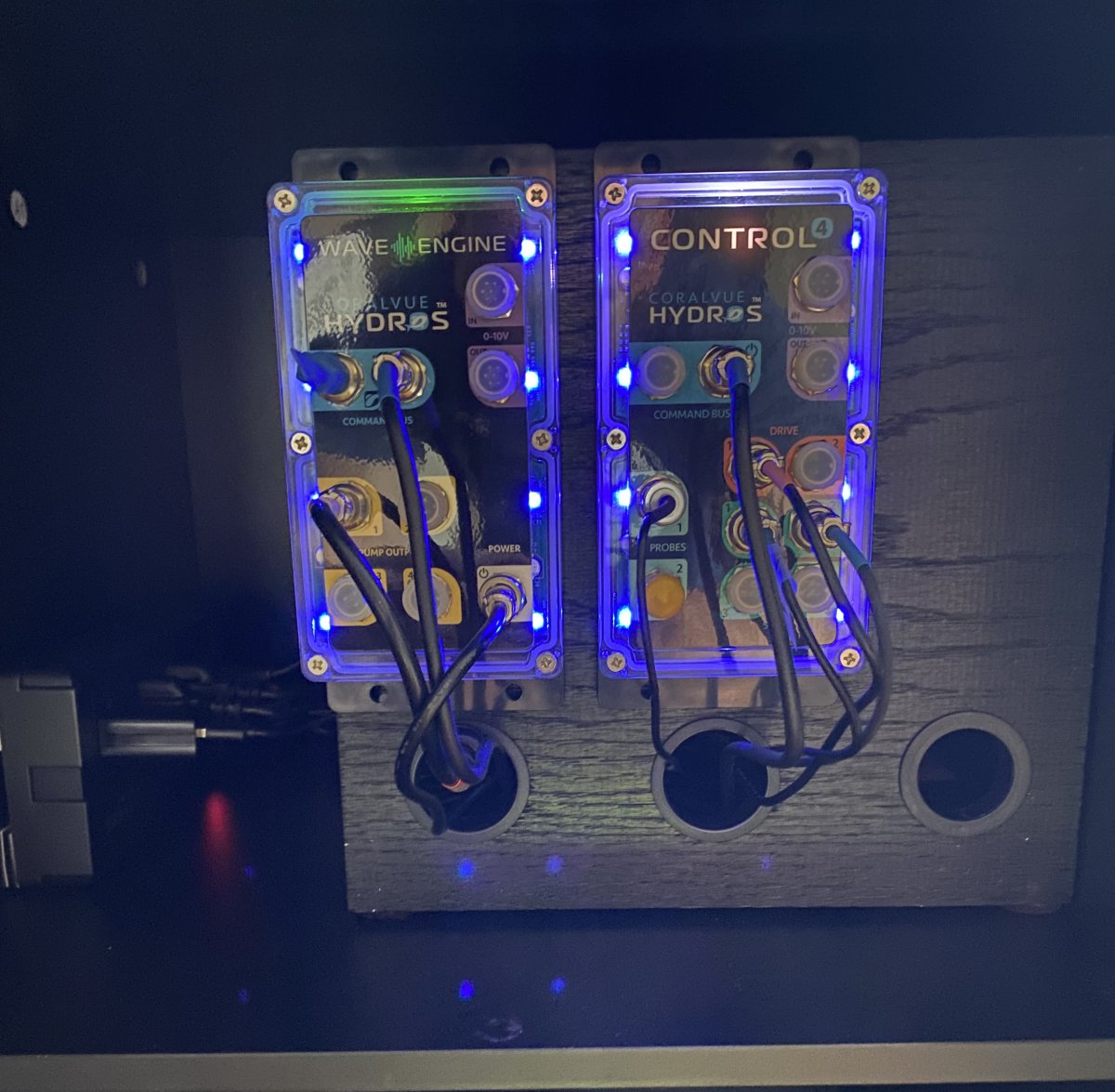 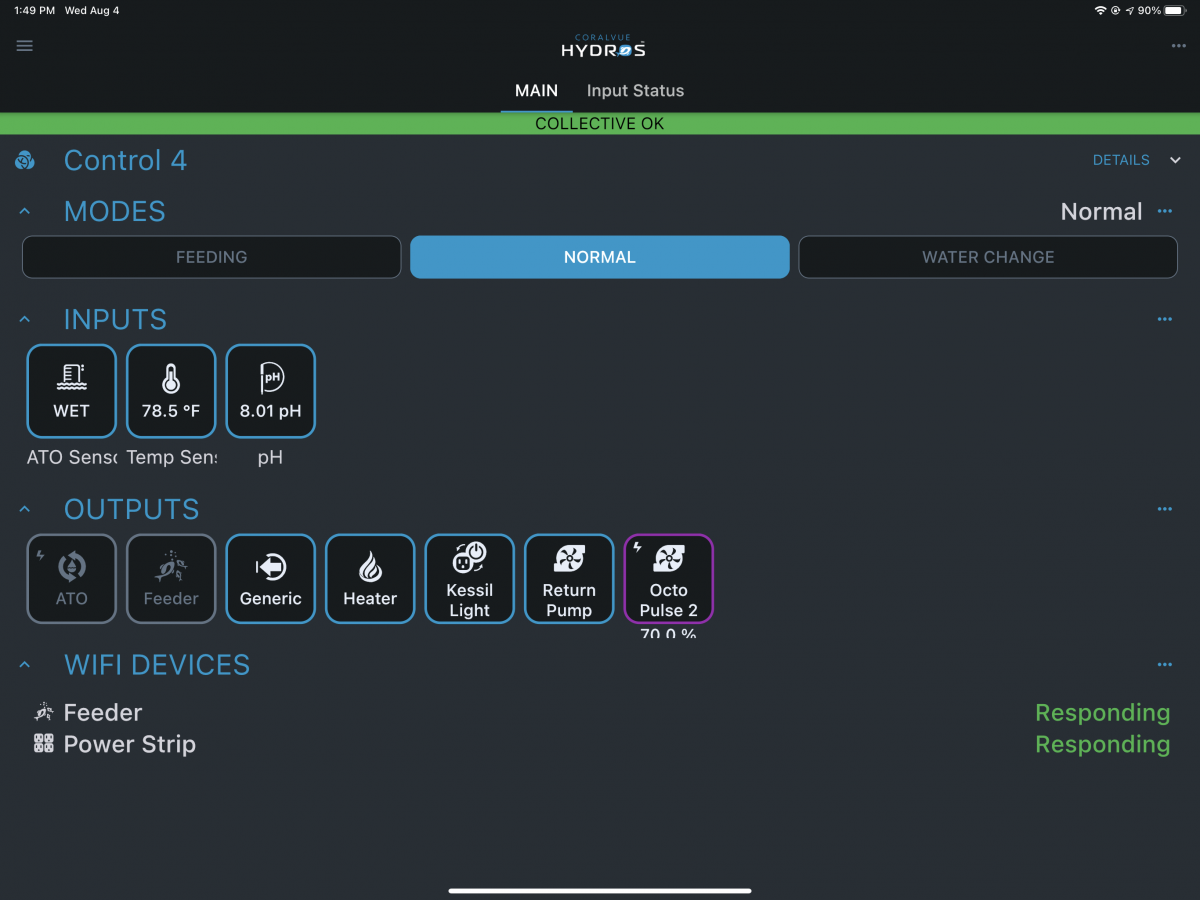 Looking like a cool set up! Any ideas on stocking yet? With the kessil 360, should be able to grow near any thing. Got a a160 over my 29g
OP

Thank you! I admit that I’ve been remiss in updating my build. The tank is chugging along. Parameters are reasonably stable. Minor diatom bloom Going. I’ve been very diligent with weekly WC and changing the filter floss.

My stock so far:

i believe I’m done with the above.

All appear to be doing well. Though paying special attention to the carnation.