Yeah, me too. I stumbled upon his website a few months ago, and it looks like they QT pretty well over there. I might end up giving it a try.

I've heard a lot of good things about Dr. Reef as well. Seems like one of the few people selling well quarantined fish.
OP

drawman said:
I really like that BC Aquatic Man I think it's going to grow out nice!

I've heard a lot of good things about Dr. Reef as well. Seems like one of the few people selling well quarantined fish.
Click to expand...

Same, the Aquatic Man is hands down one of my top 5 acros. The colorations on it is insane, and it is very tolerant/easy to grow.

I'll let you know if I order from Dr. Reef. I'll have to wait a bit because I have to finish treating the damsel in the QT tank first, but it definitely looks like an attractive option. 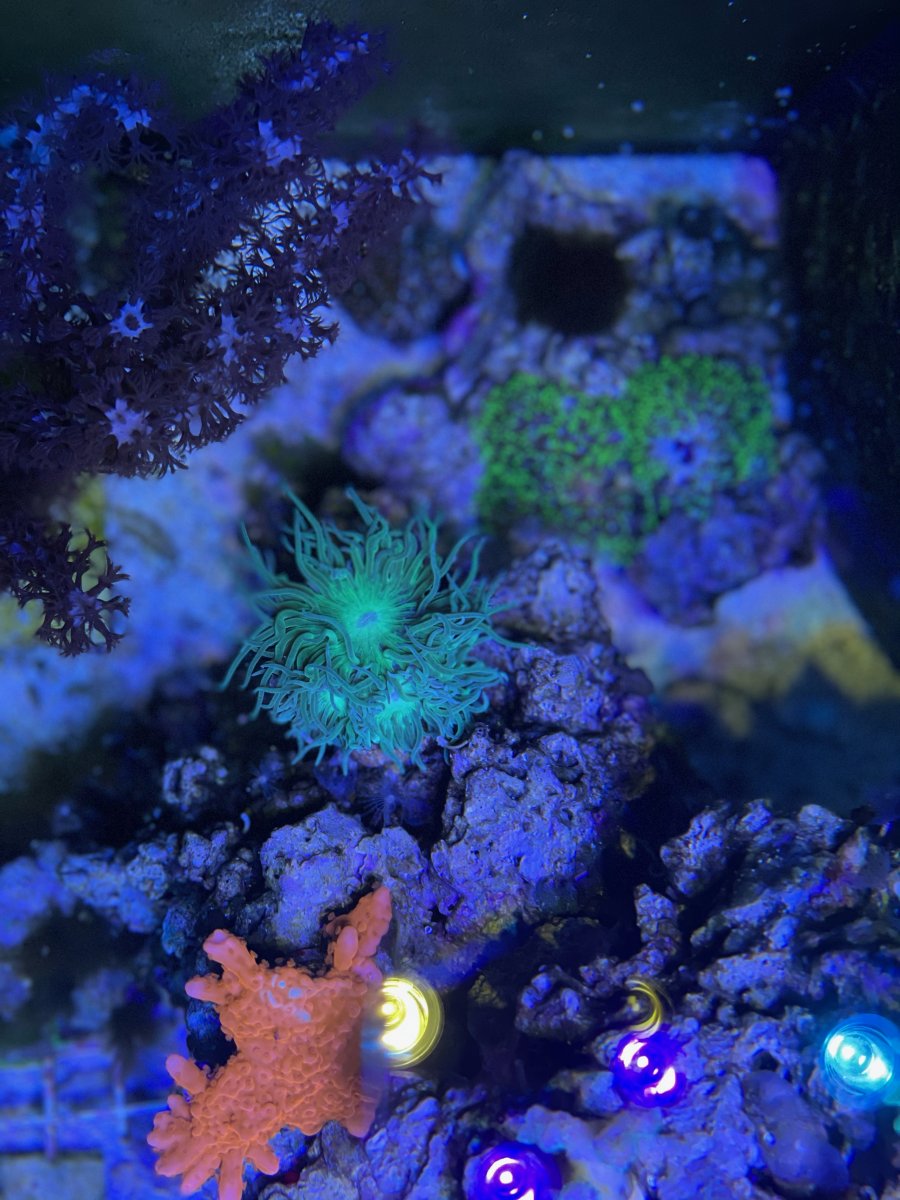 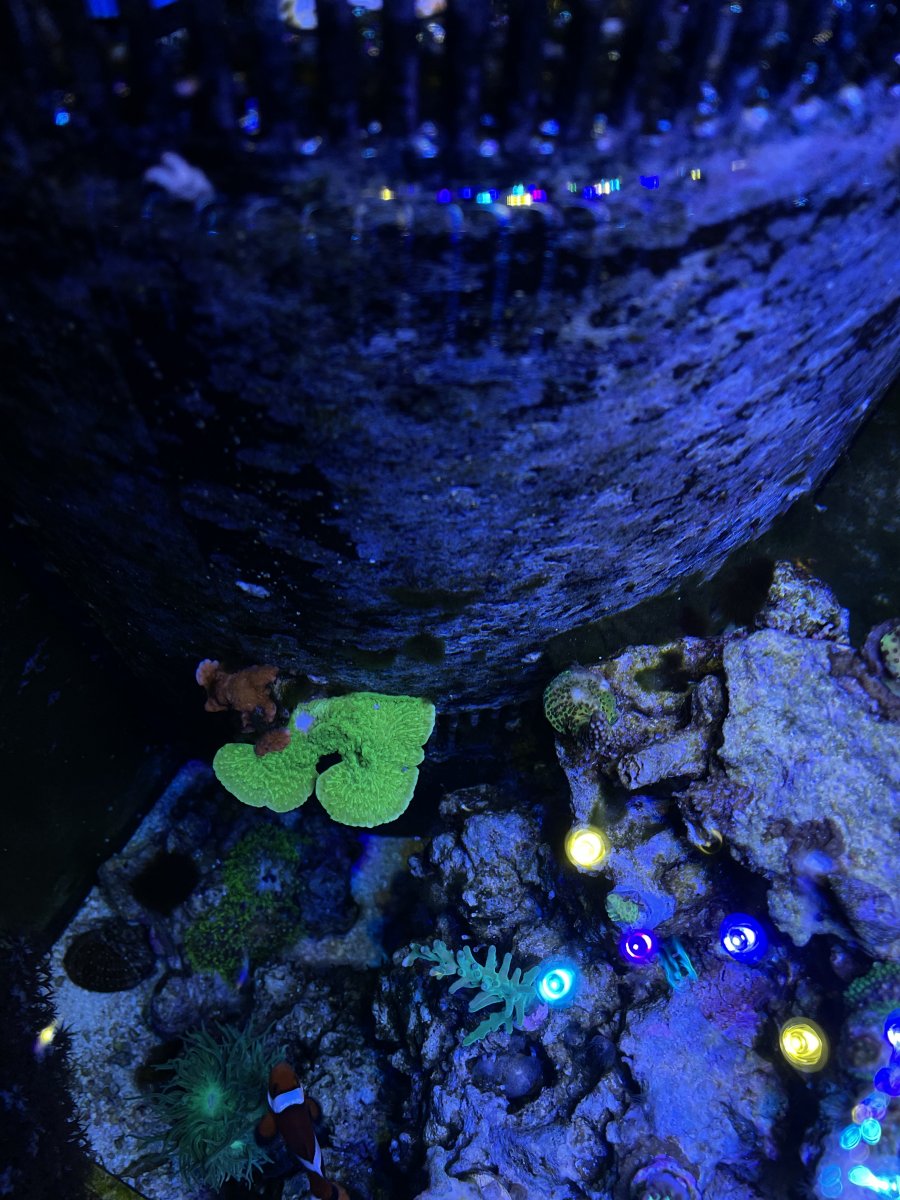 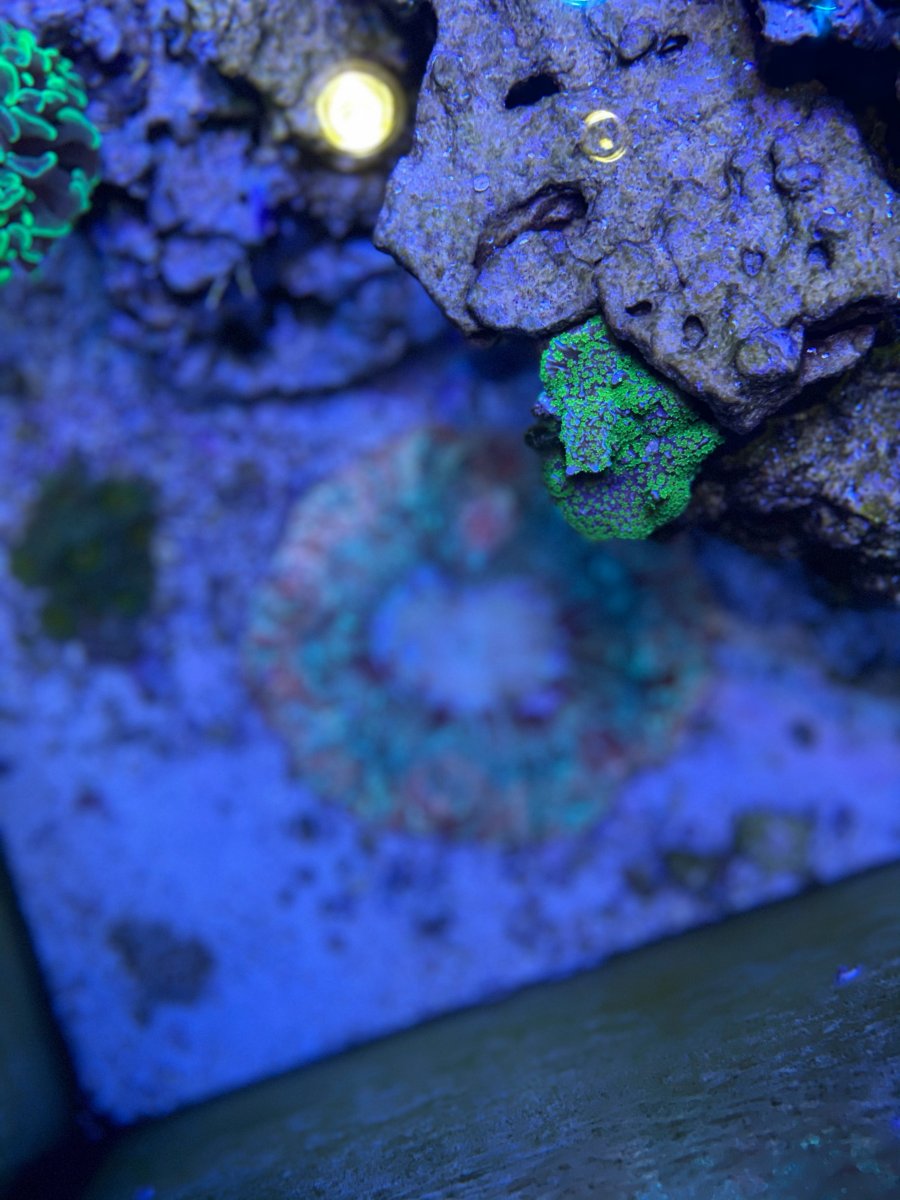 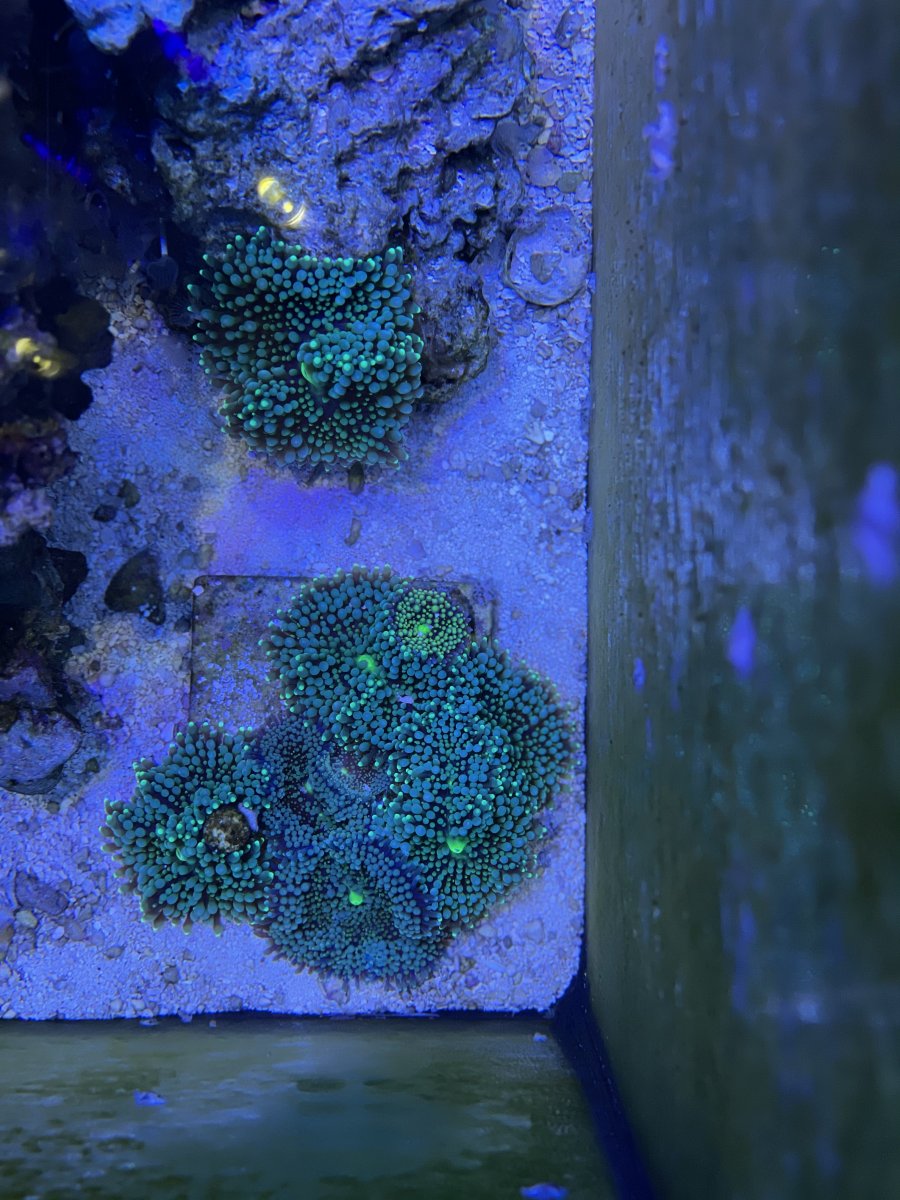 Rating - 0%
0   0   0
Thanks, me too! I’m looking to expand it with some other color ricordeas. I’m also looking to get some Rhodactis in the low light areas like forest fire/similar and WWC OG bounce. Taking any donations

Rating - 0%
0   0   0
Hey, sorry for not updating this thread recently. I've been very busy, and realized that I left this thread on radio silent. A couple updates:
1. Embarrassing as it is, we all do it sometimes to a degree... I neglected my tank for a few weeks, and nutrients bottomed out as I wasn't feeding constantly like normal. In addition, I raised my lighting schedule (wrong move), and didn't have time to watch how the corals would react to the increased lighting. Thirdly, I neglected to do water changes for a long time, and my DI resin was recently exhausted. Plus an alk spike from decreased consumption! Needless to say, I lost a few frags (BC soft sunset, BC Pig Champion, BC magic wand), and almost lost others, which are now in recovery (PC rainbow, RR rainbow loom). I'm super disappointed and kicking myself for letting this happen. But onwards and upwards... Some acros like BC aquatic man, BC blue moon humulis, BC mothership, Ricky's shortcake, and others NEVER SKIPPED A BEAT. Even though they were already my favorites, this only cements them into their places as the top corals in my tank, in my eyes.
2. I fixed these problems above by doing quality water changes with low-alk saltwater. Corals perked up, but some still look pretty sad.
3. I received a Battlebox today! This includes my Bonfire frag for the BC bonfire grow out contest. The amazing pack that Adam put together for me:
BC Bonfire
BC Bohemia
BC lemon peel
BC Rainbows Army
BC Bubblebath Unicorn
BC Bleeding Tree
BC Miss Scarlet
BC Rose Milli
BC Houdini

I'll post some pictures tomorrow, but here is some preliminary pics of the bonfire (with the Bubblebath Unicorn photobombing it lol). 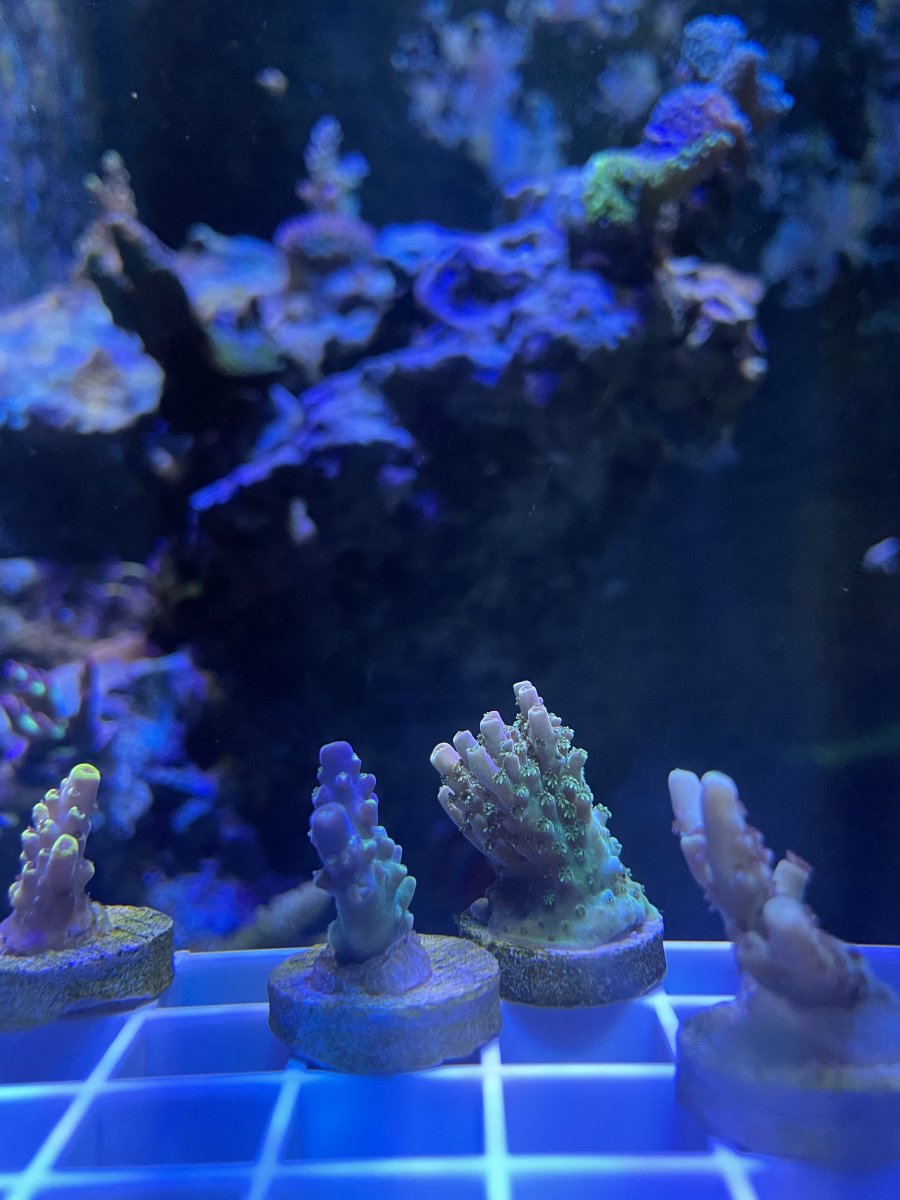 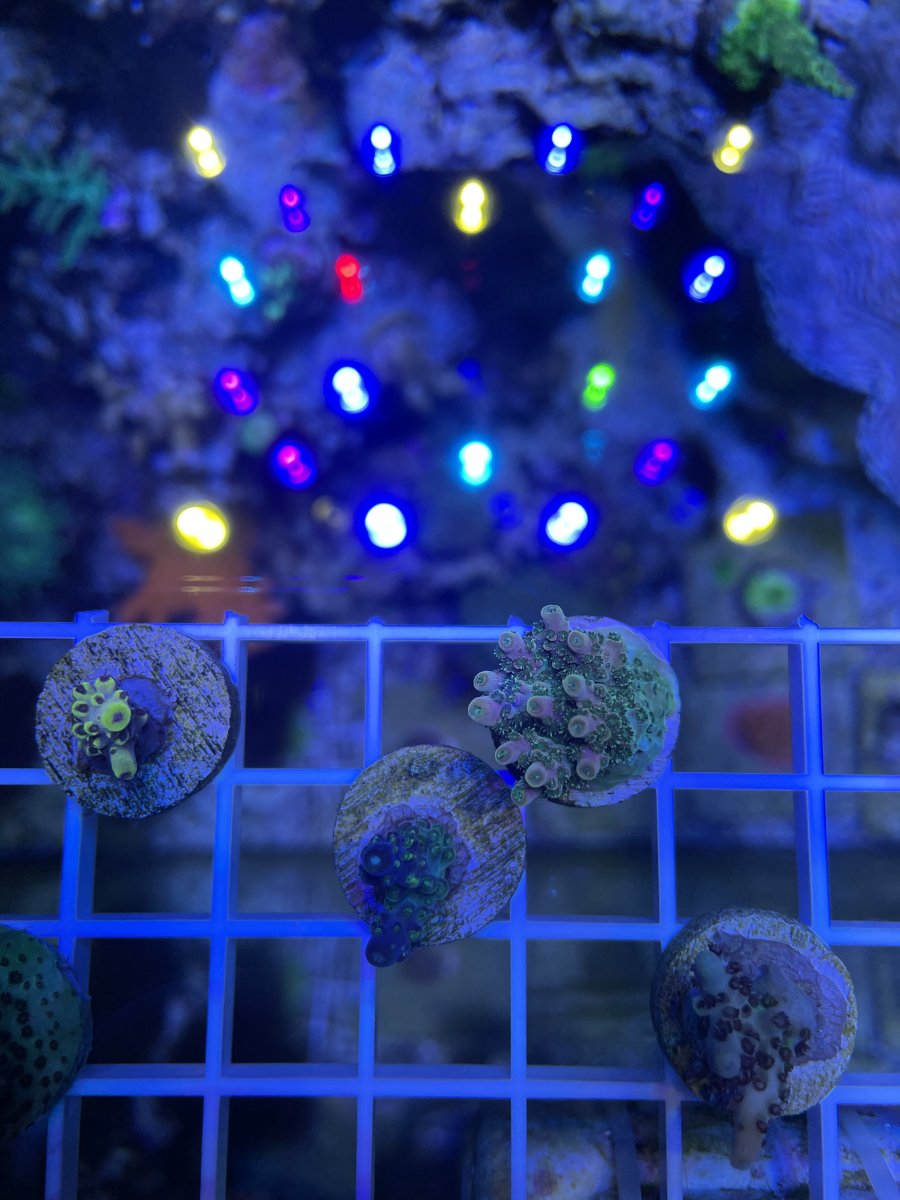 Wish me luck on the SPS-success witch hunt!
OP

Rating - 0%
0   0   0
Going to start automatically dosing nutrients to avoid a situation similar to what happened above...
OP 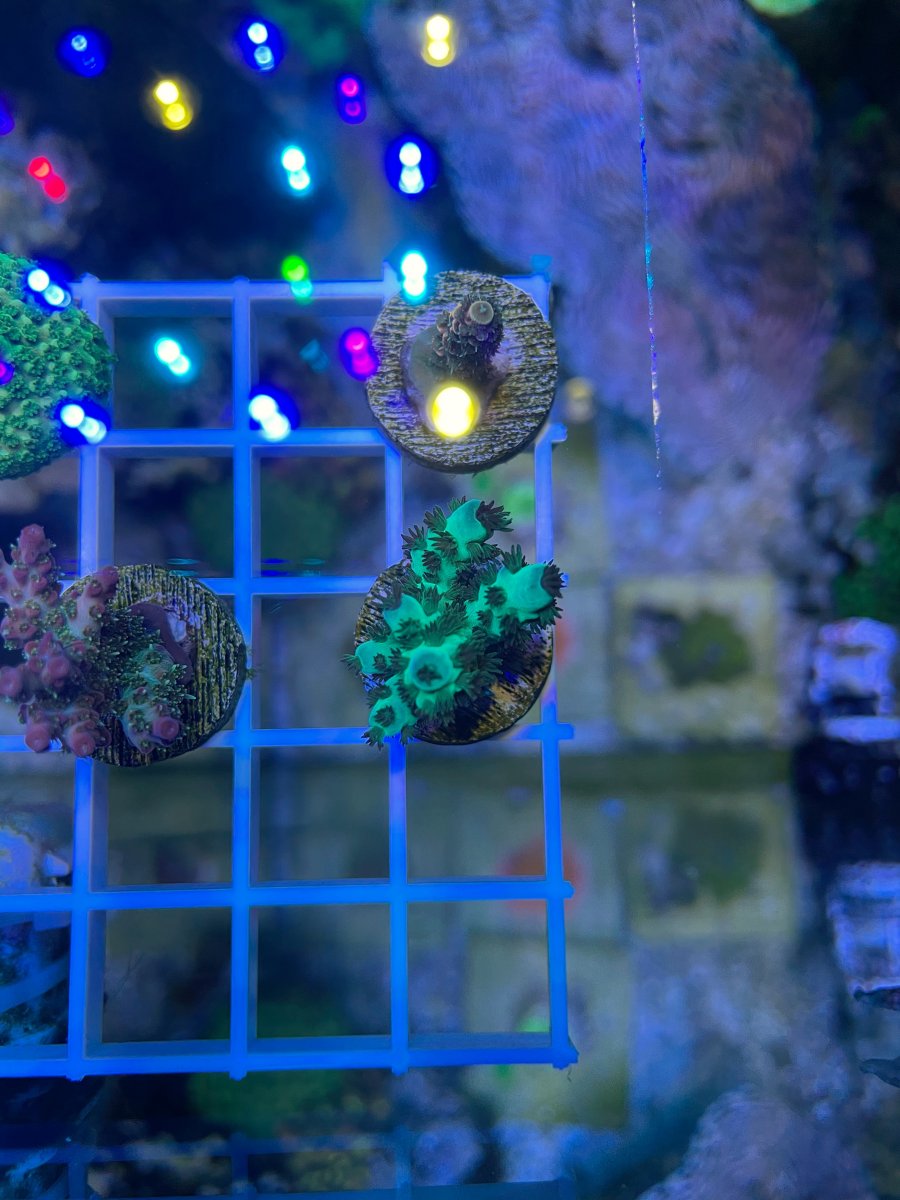 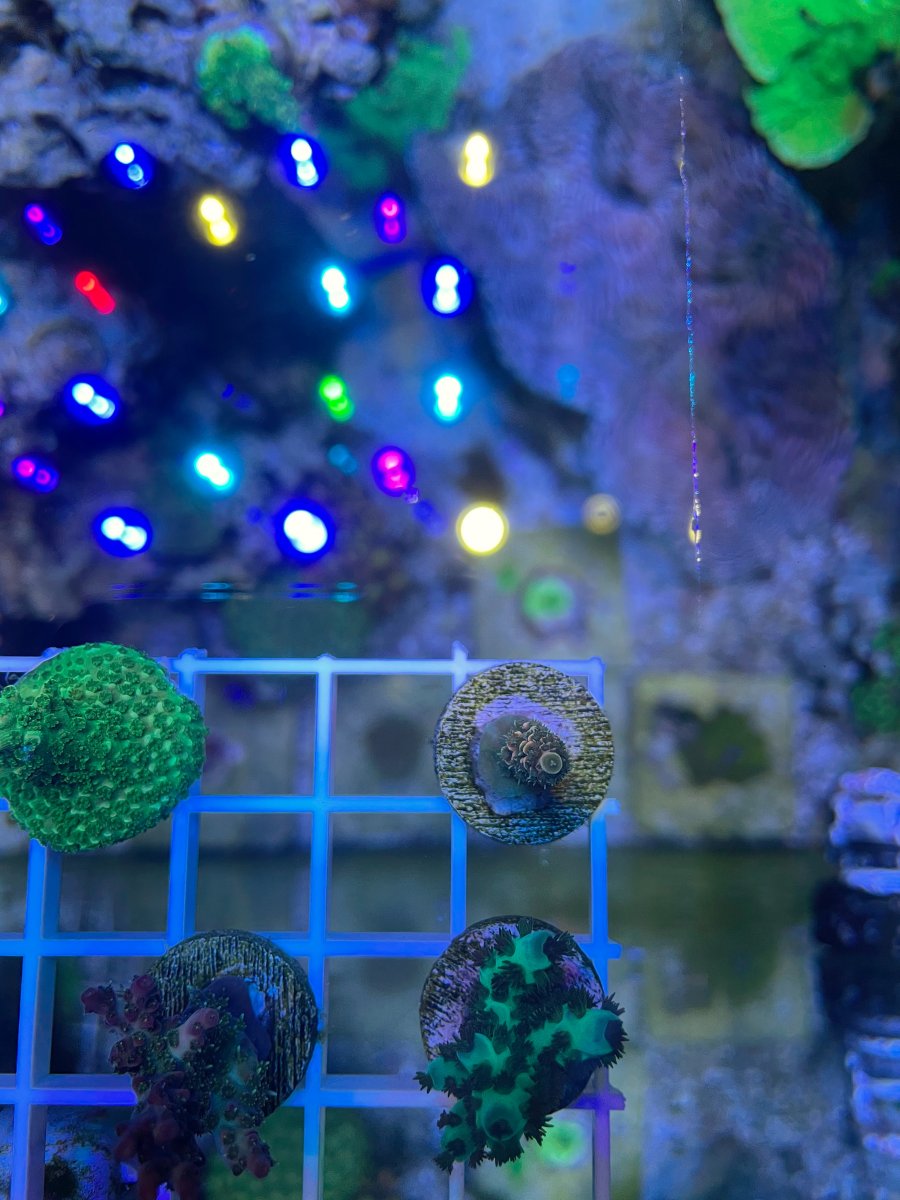 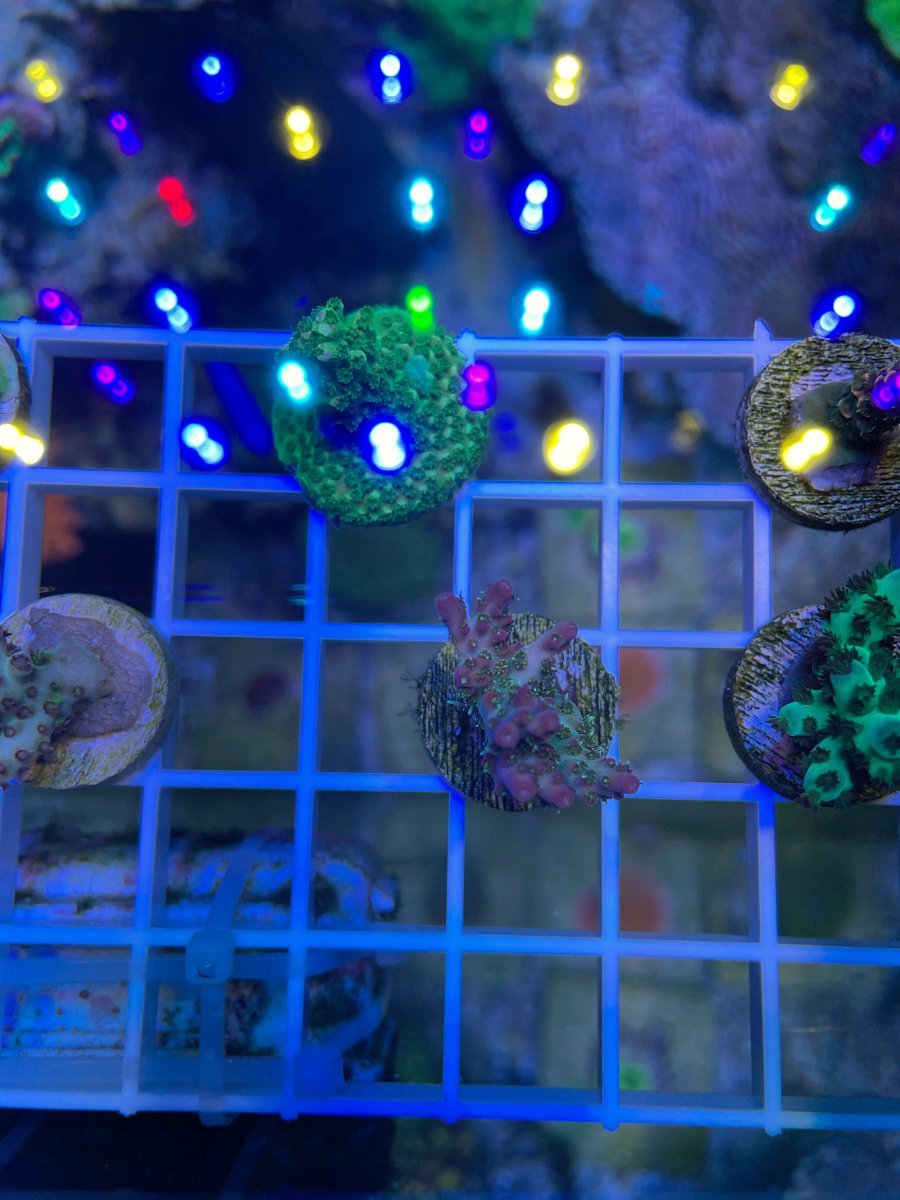 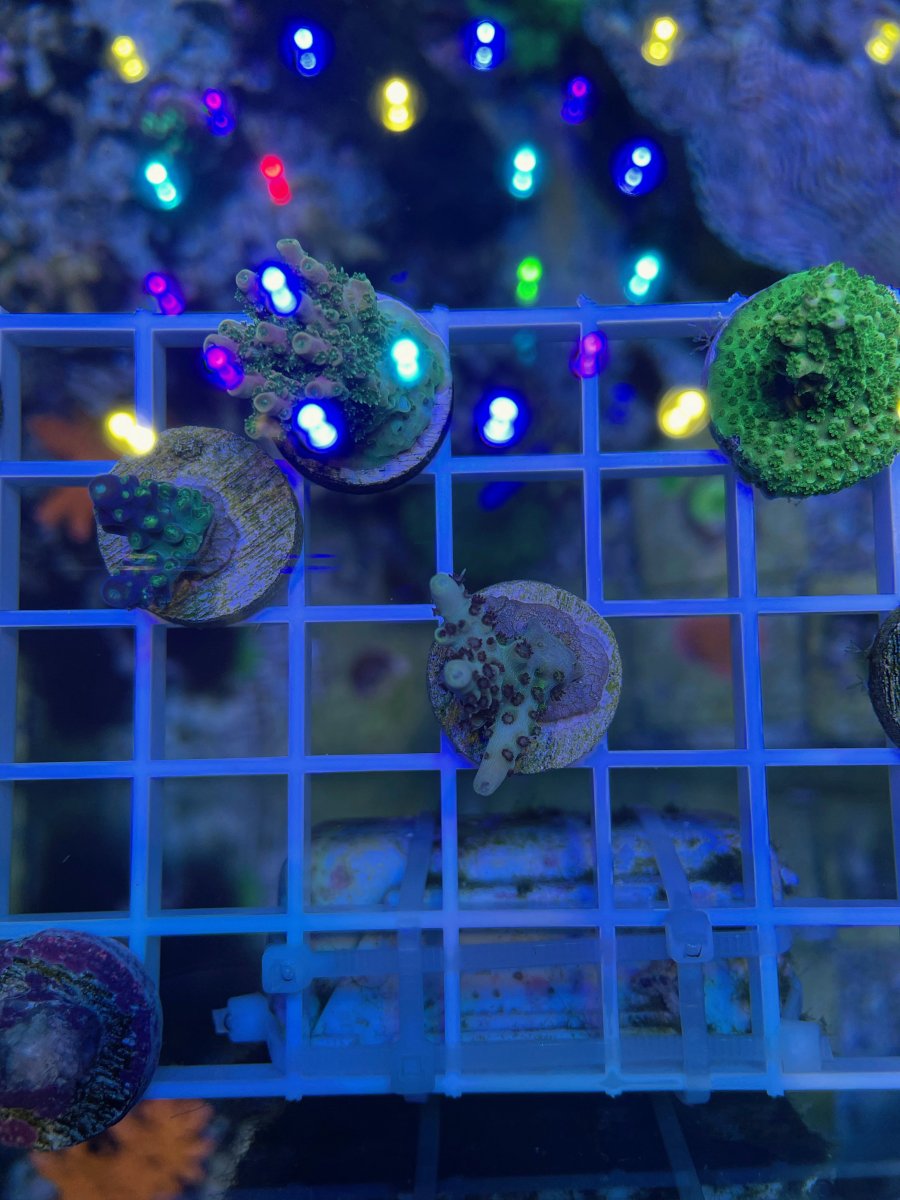 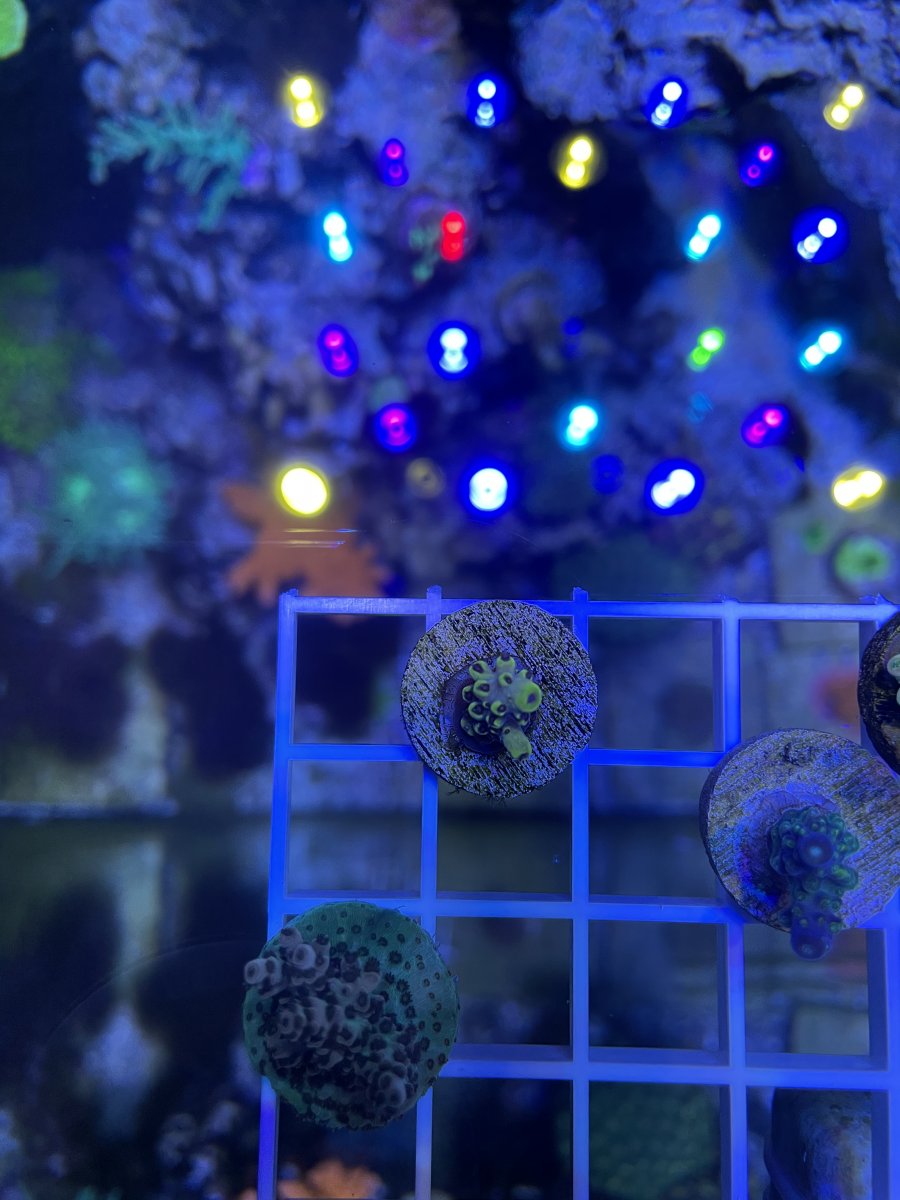 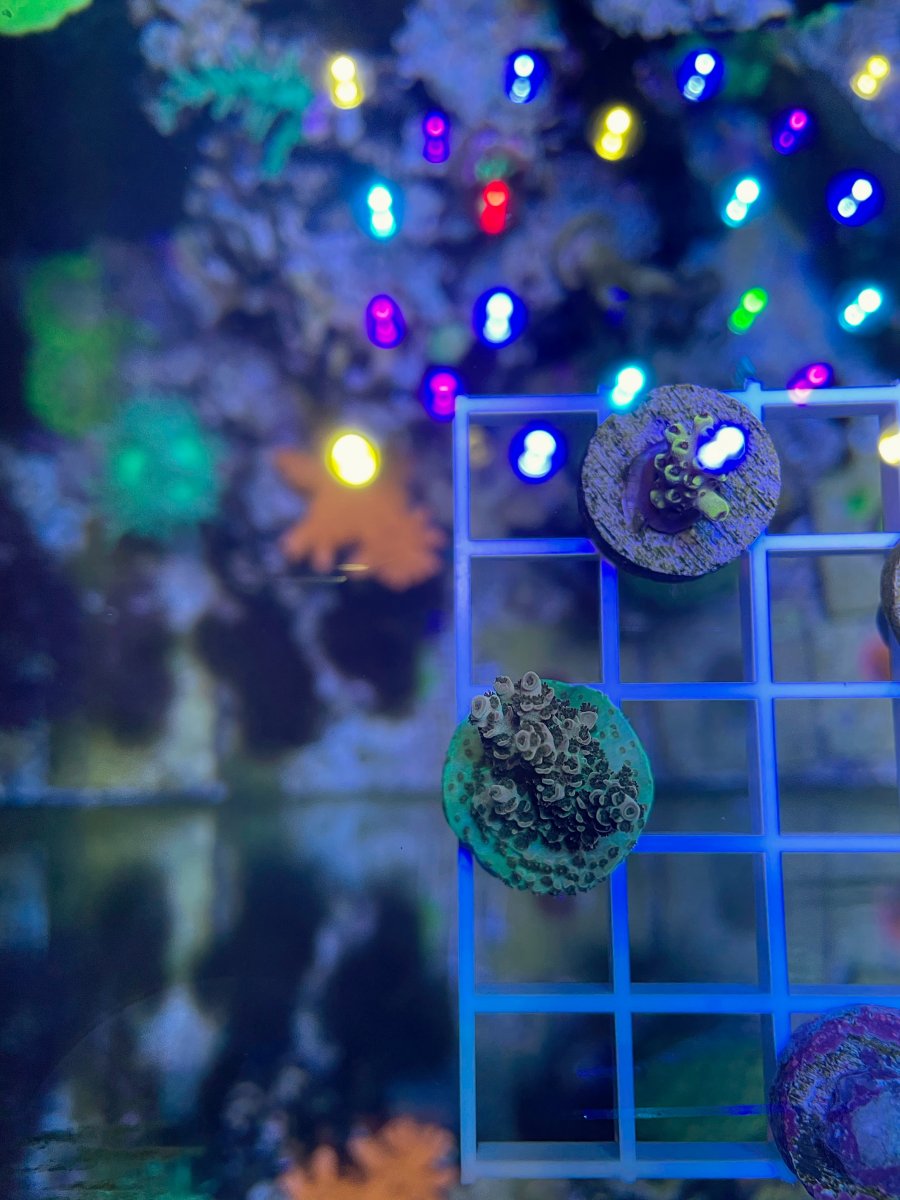 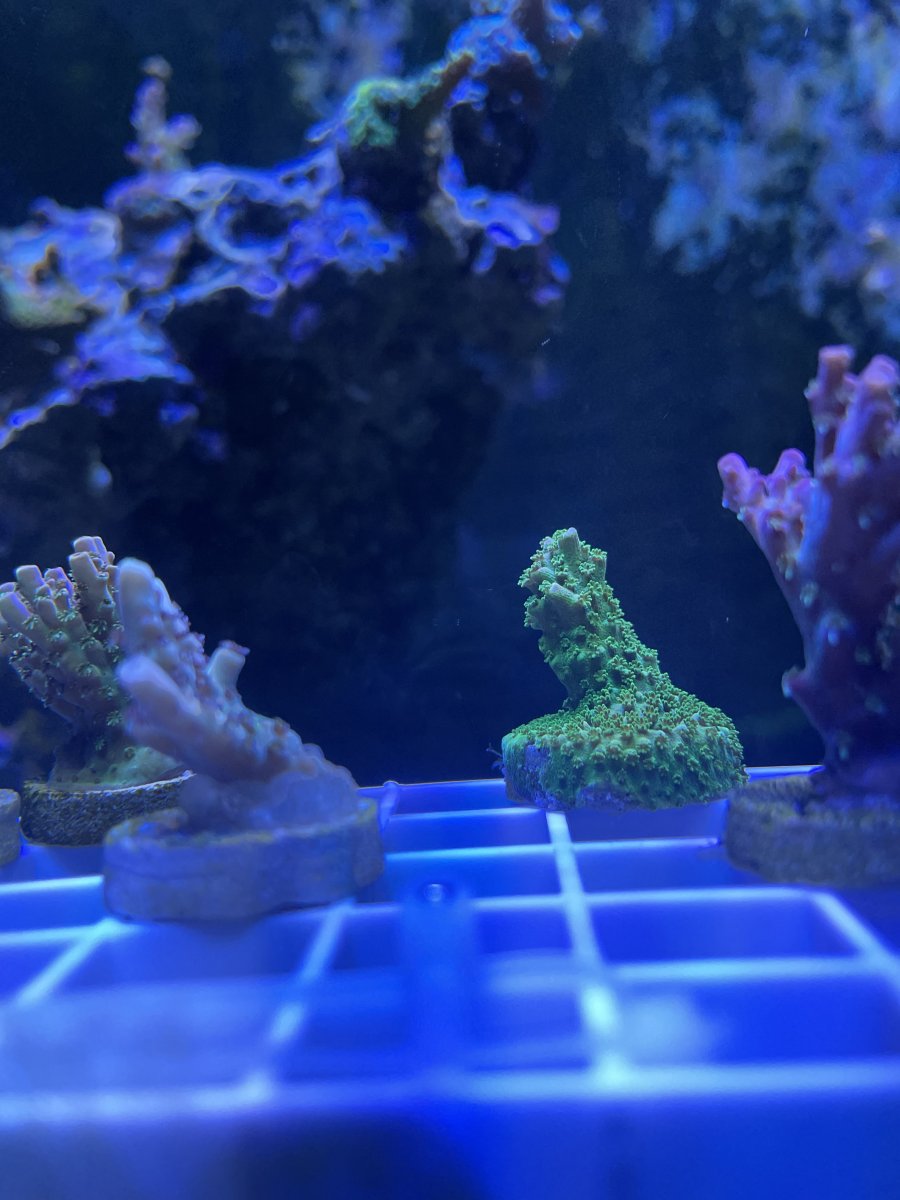 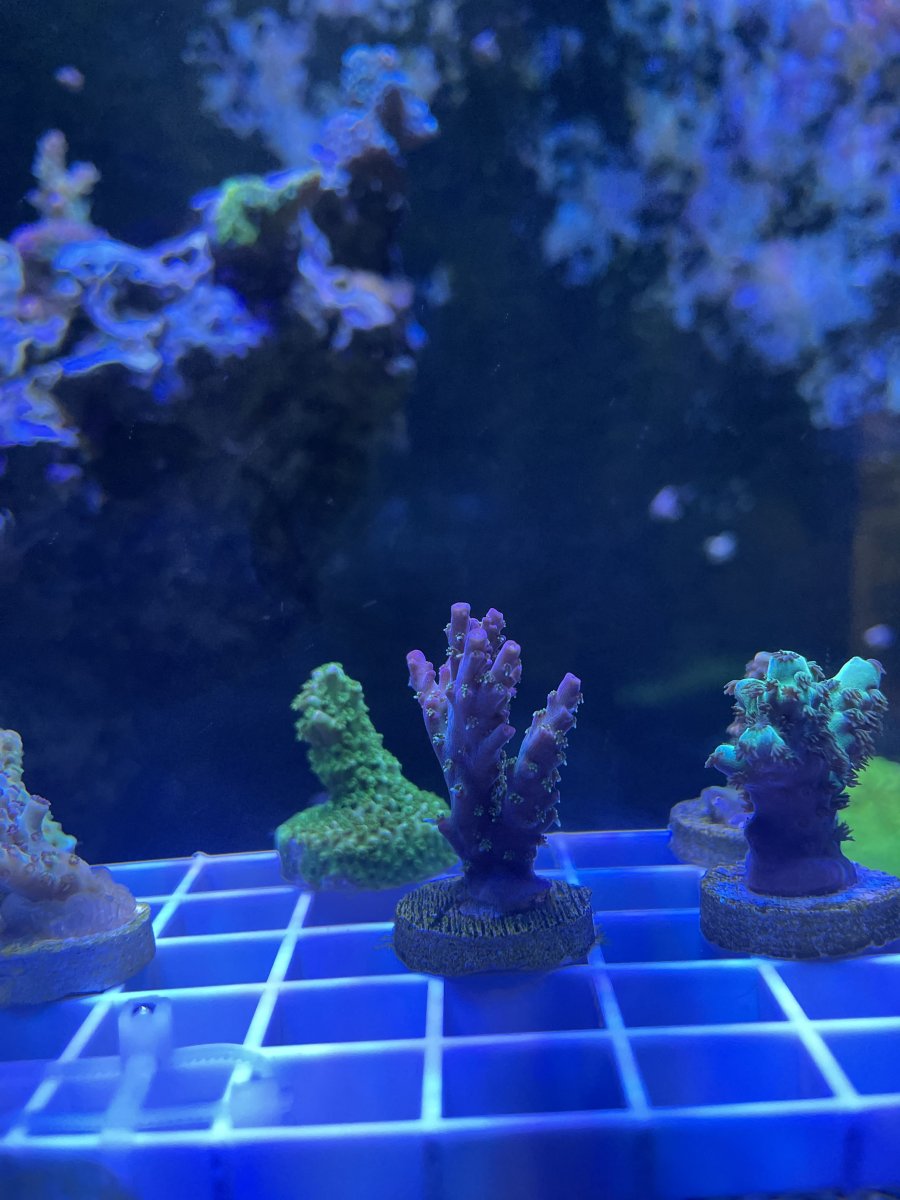 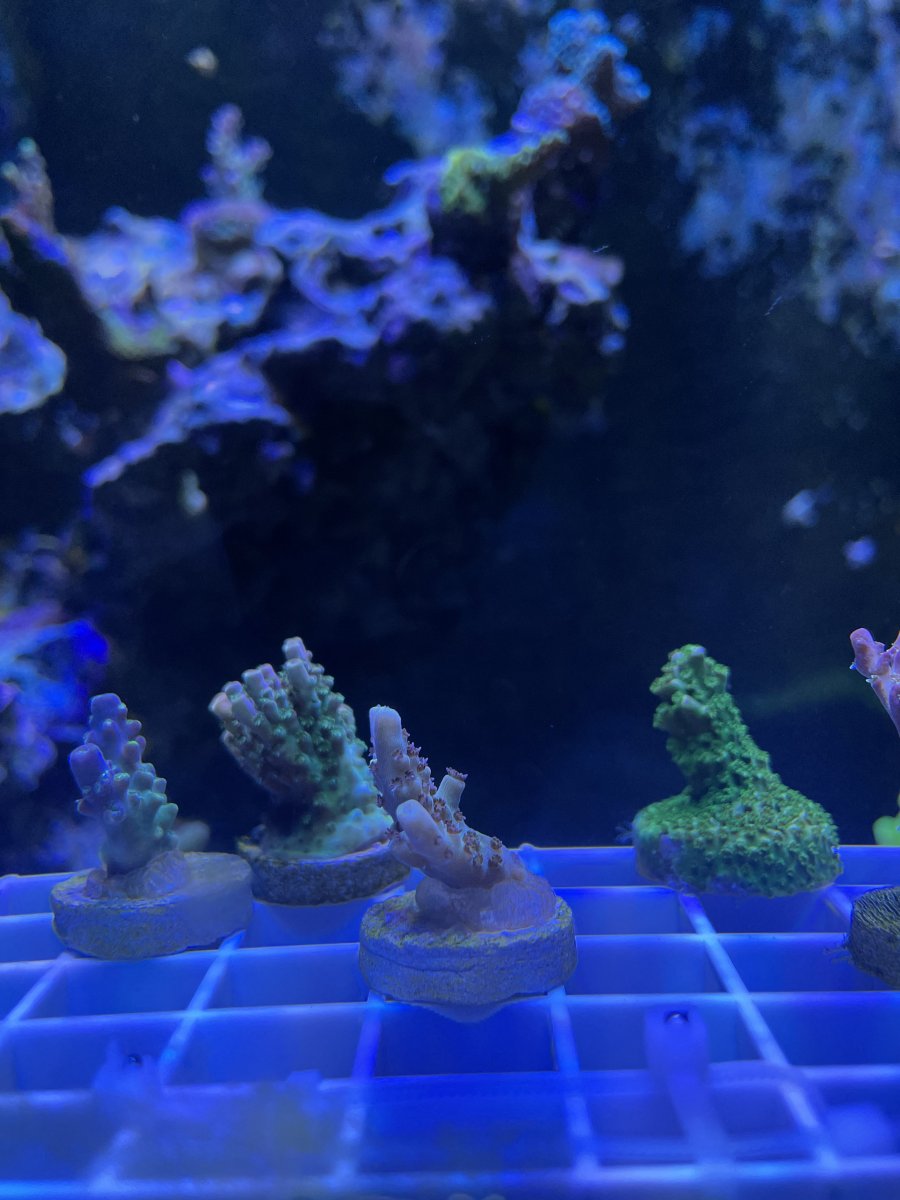 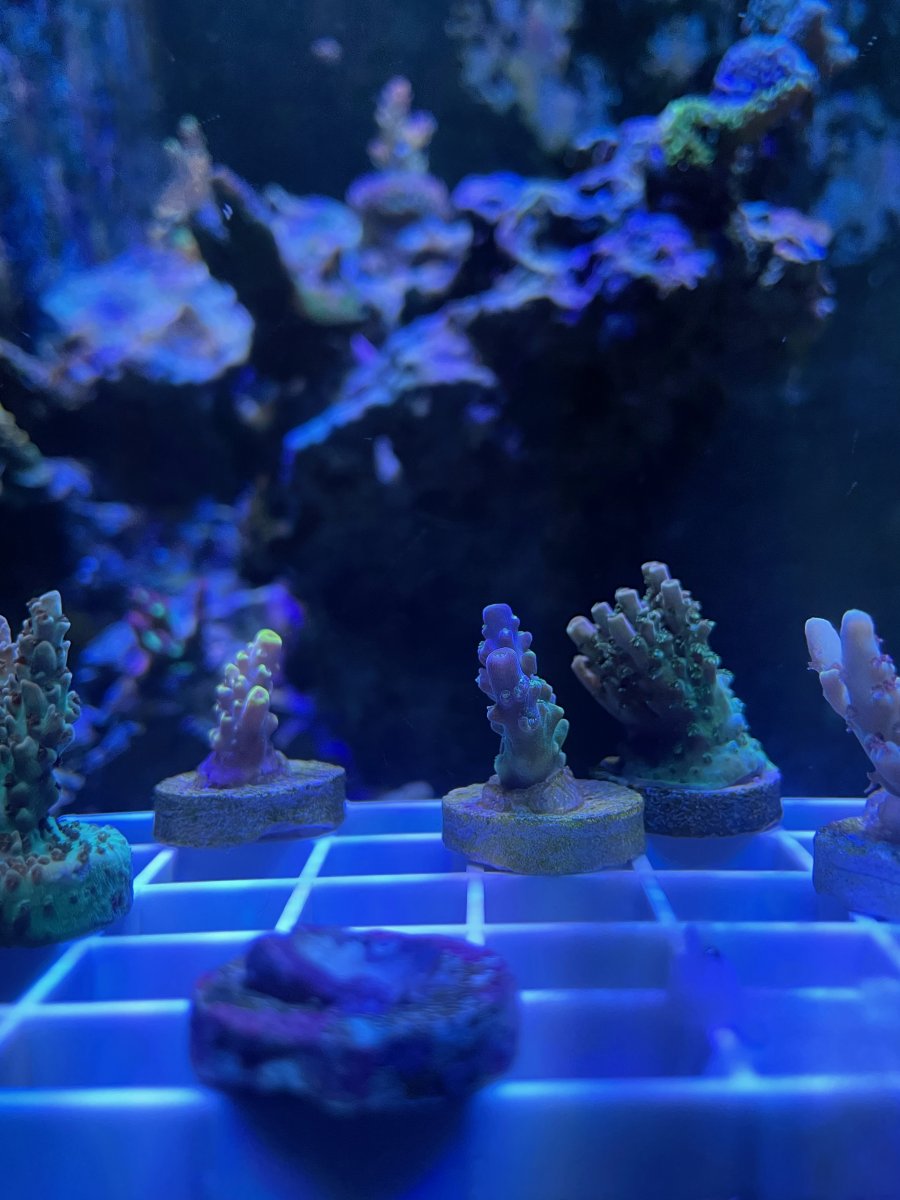 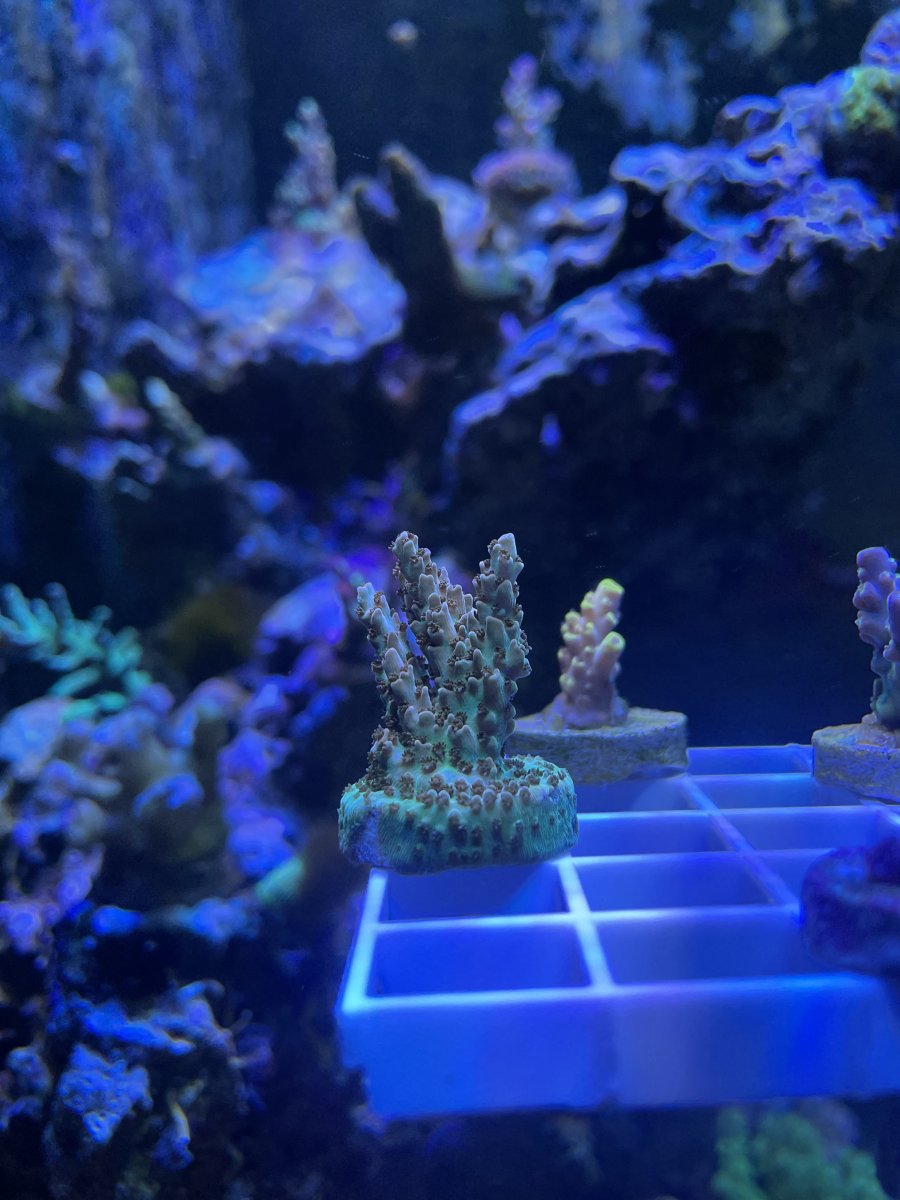 Rating - 0%
0   0   0
My box had one that looked just like the first frag pic with the yellow LED on it, it was called tigerlily but I can't find it on the site. Also got foist fire table in the no name box as well so I'm stoked, gorgeous frags! Awesome looking stuff.
OP

Mav88 said:
My box had one that looked just like the first frag pic with the yellow LED on it, it was called tigerlily but I can't find it on the site. Also got foist fire table in the no name box as well so I'm stoked, gorgeous frags! Awesome looking stuff.
Click to expand...

Some of the coolest stuff you can get from Adam is not on his site! The Foist Fire table is also insanely cool as well. Adam really has some nice stuff, and we’re extremely lucky that he’s so generous with Battleboxes. Would love to see a pic of that tiger lily!

Rating - 0%
0   0   0
I'll get it tomorrow when I take my bonfire photo, it's an awesome looking frag. Think only SPS i'll get from now on will be the no-name battleboxes, with some other selections, very generous!

Rating - 0%
0   0   0
So sorry for your troubles! Better whip that tank into shape for the grow-out competition! Sending good vibes...
OP

Kattkrazie said:
So sorry for your troubles! Better whip that tank into shape for the grow-out competition! Sending good vibes...
Click to expand...

Thanks so much for the good vibes @Kattkrazie! My BC Aquatic man is growing very well despite these problems, so hopefully these other new tables like the Bonfire will do well also!
OP 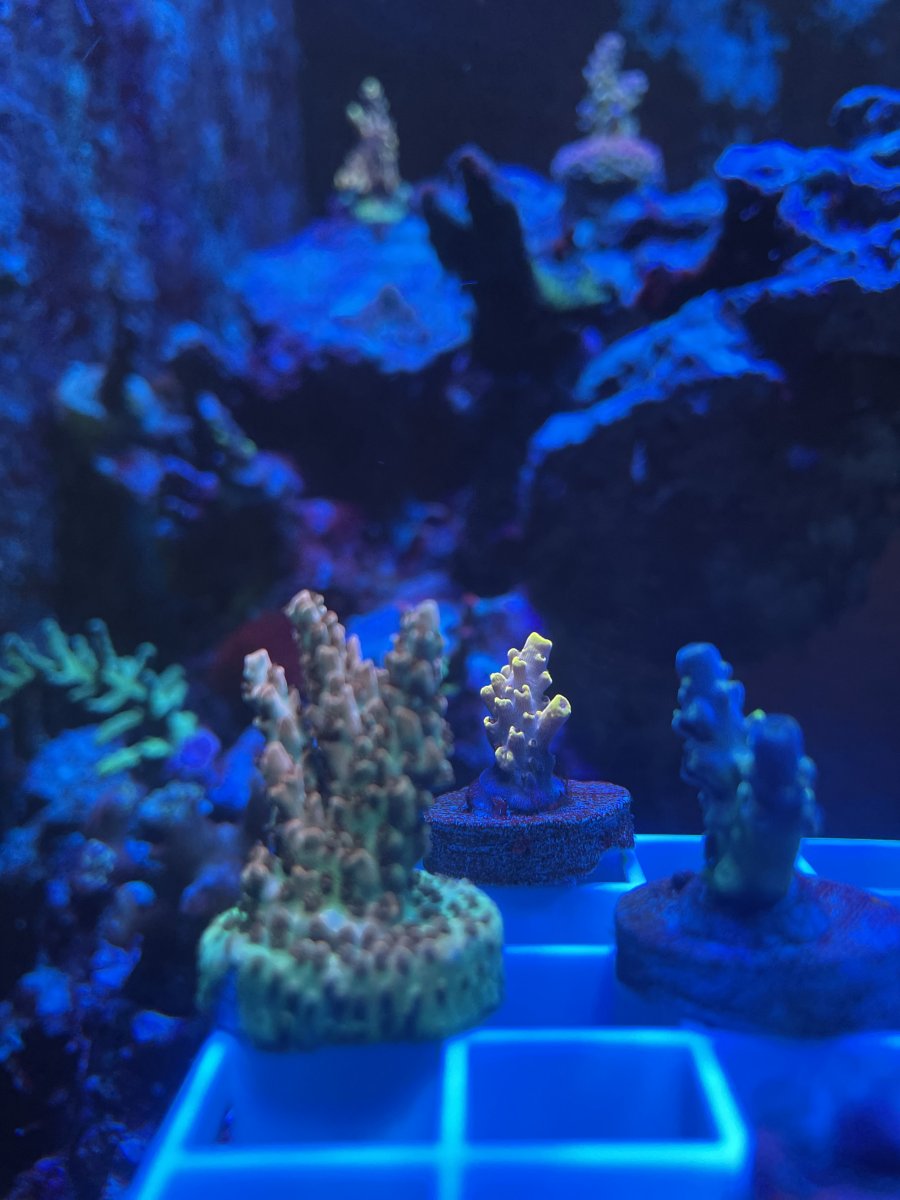 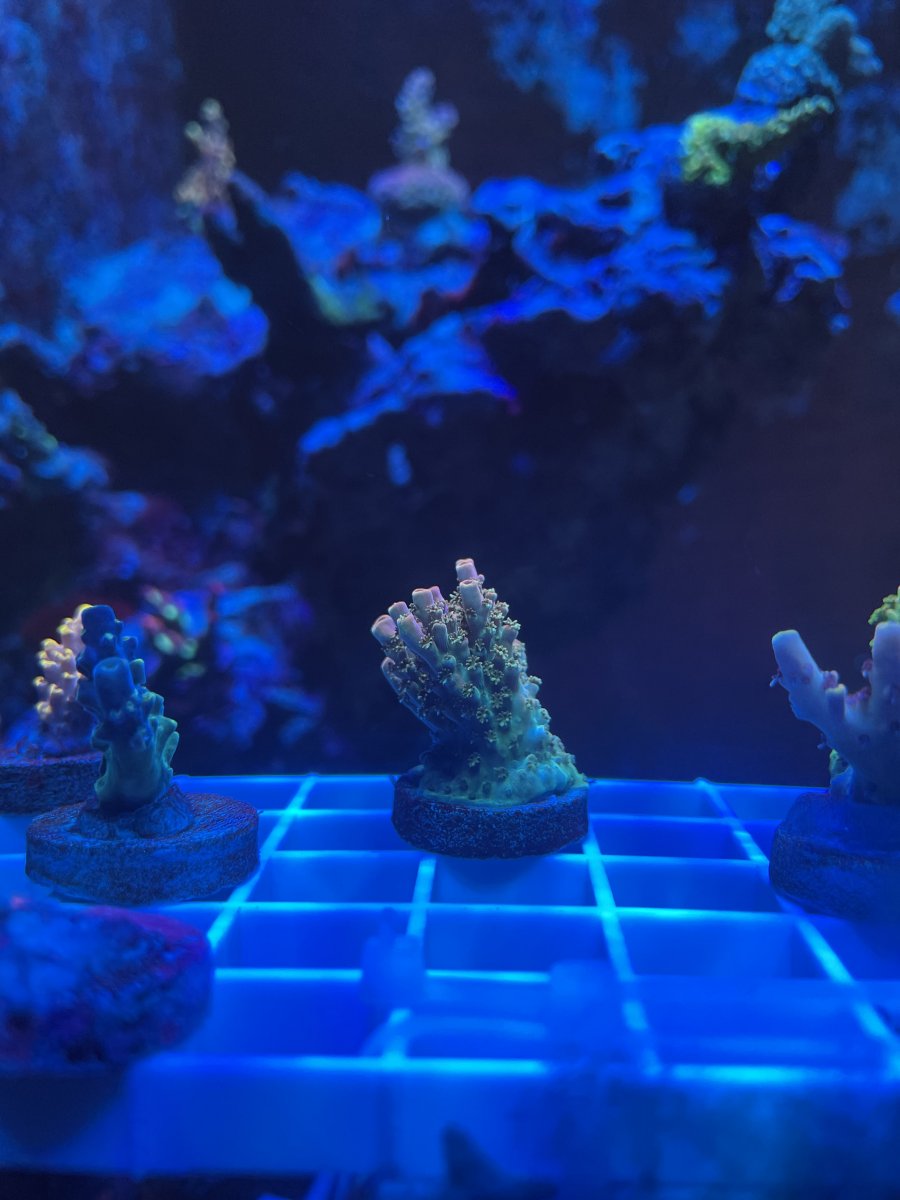 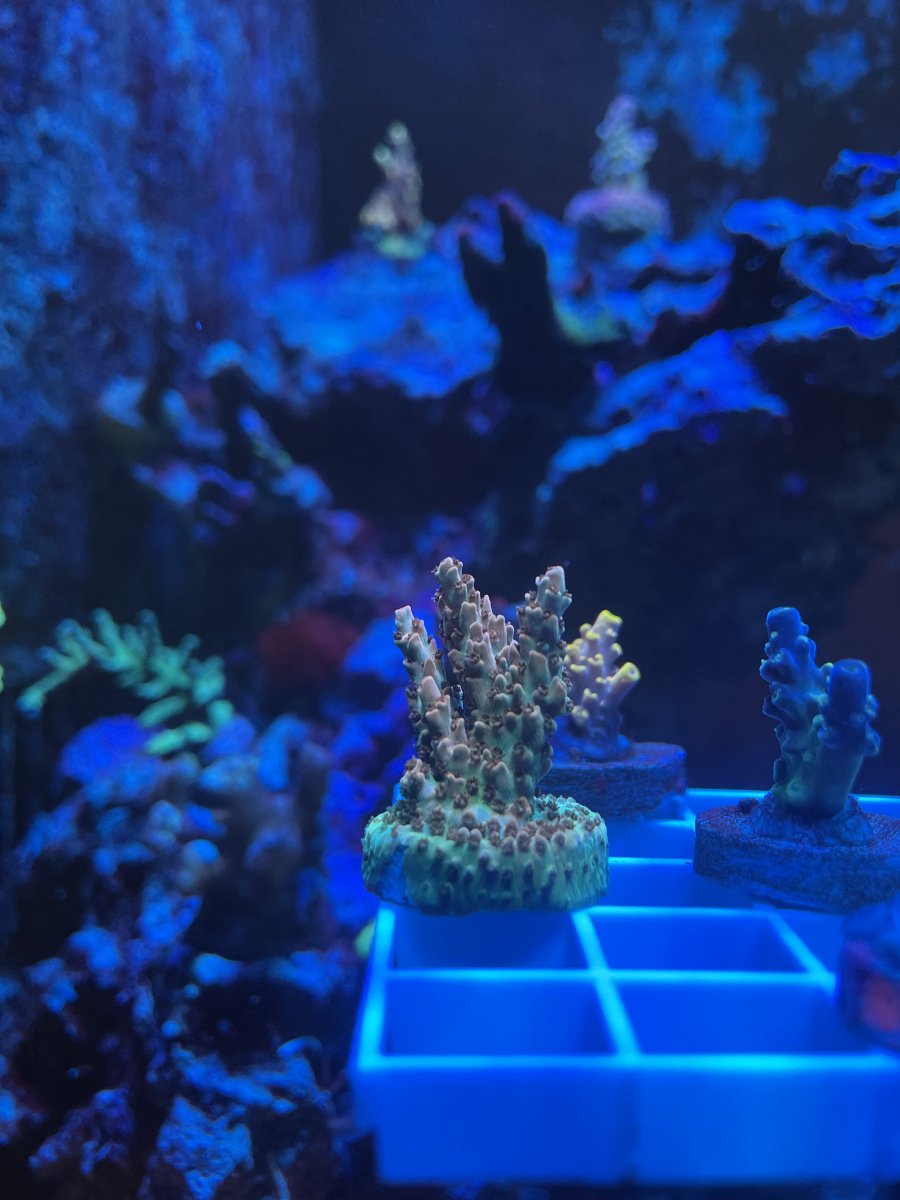 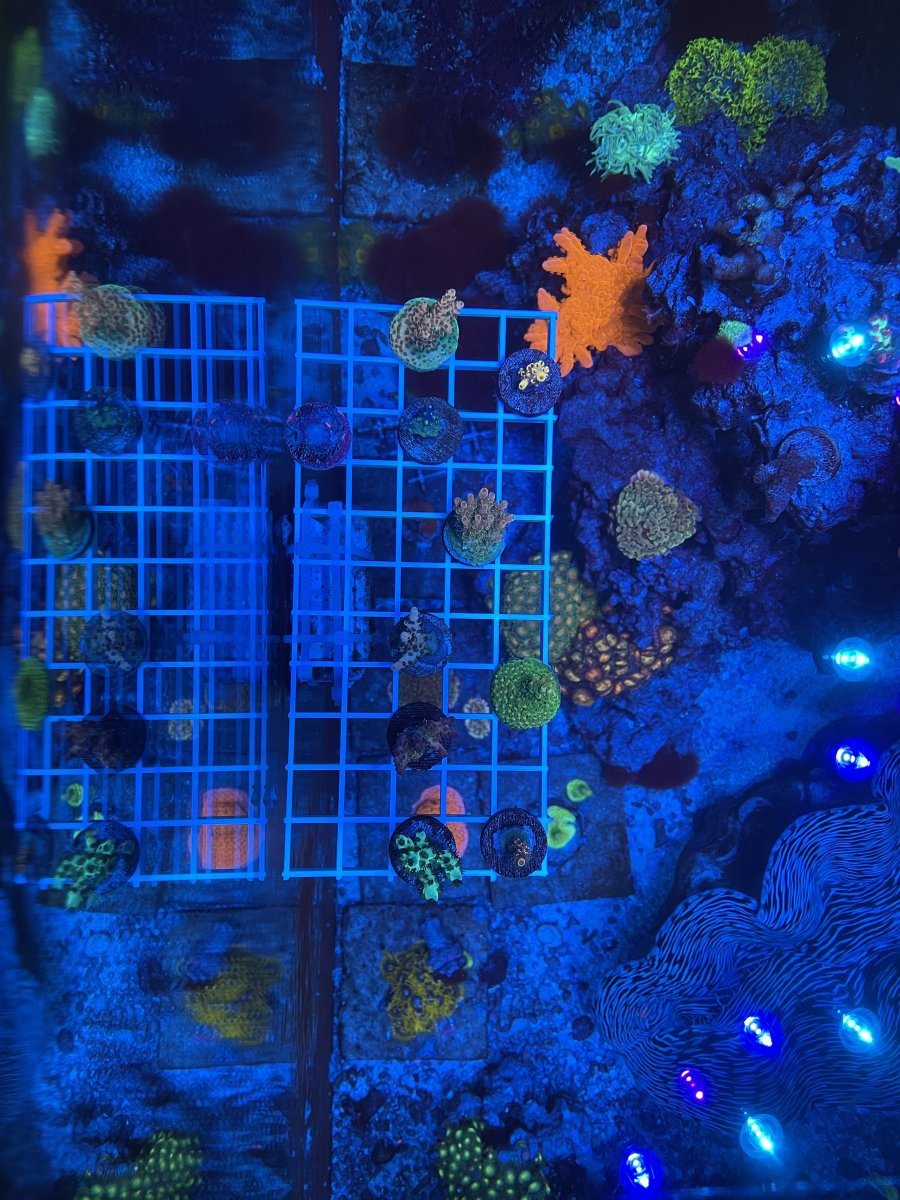 drawman said:
Sorry to hear about the losses. I'm right there with you ready to kick my tank's butt into shape.
Click to expand...

Spring cleaning in the reef tanks!

Rating - 0%
0   0   0
Tigerlily, one day i'll get better picture equipment, I use my iPhone looking through orange sunglasses! 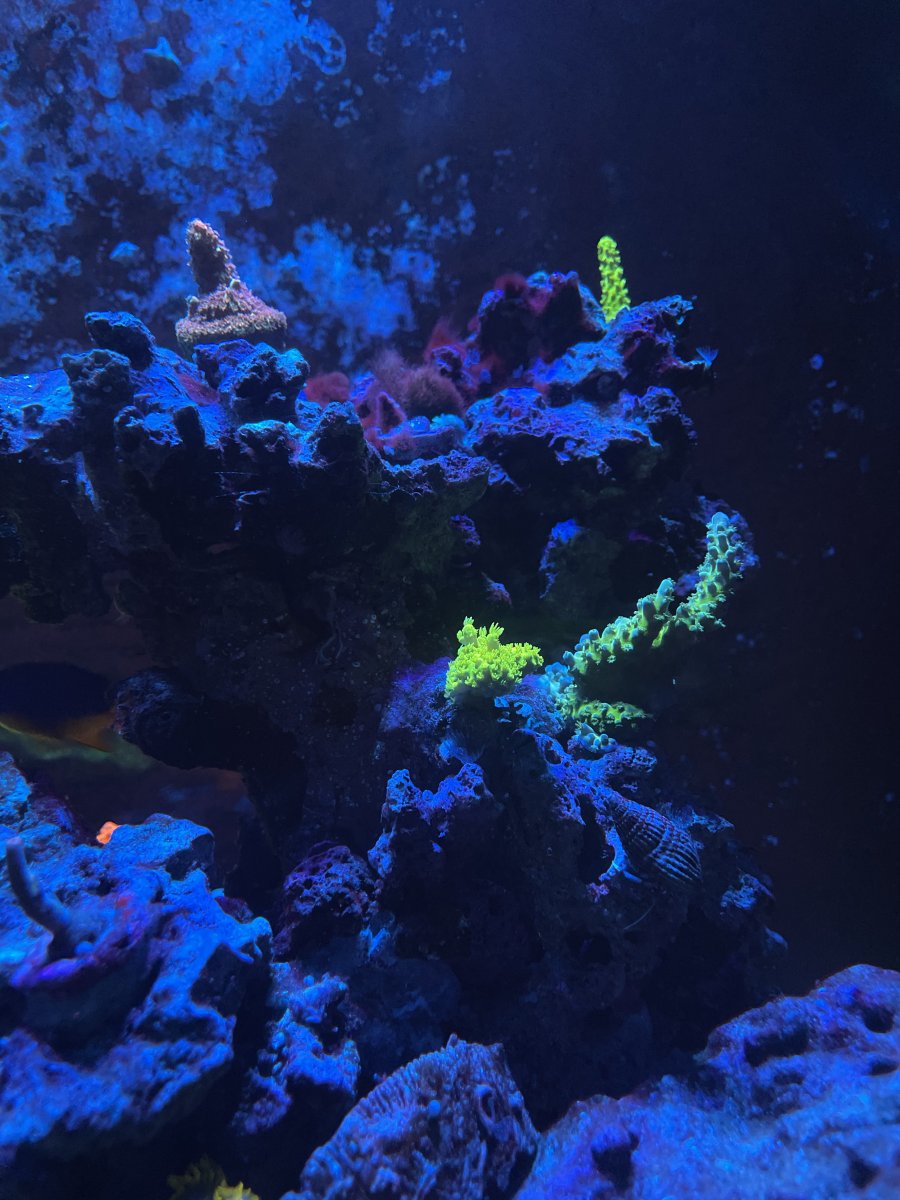 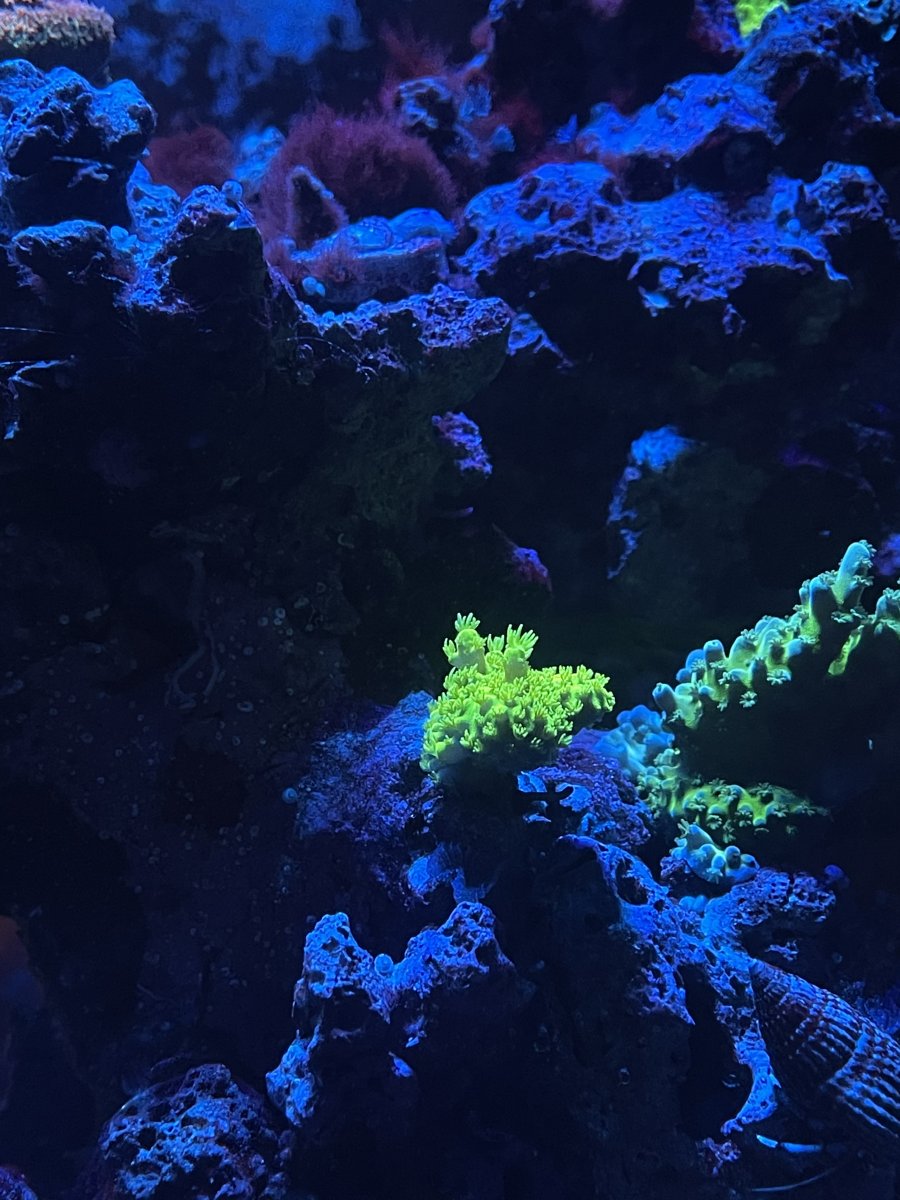 Trachy under actinics, getting bigger! 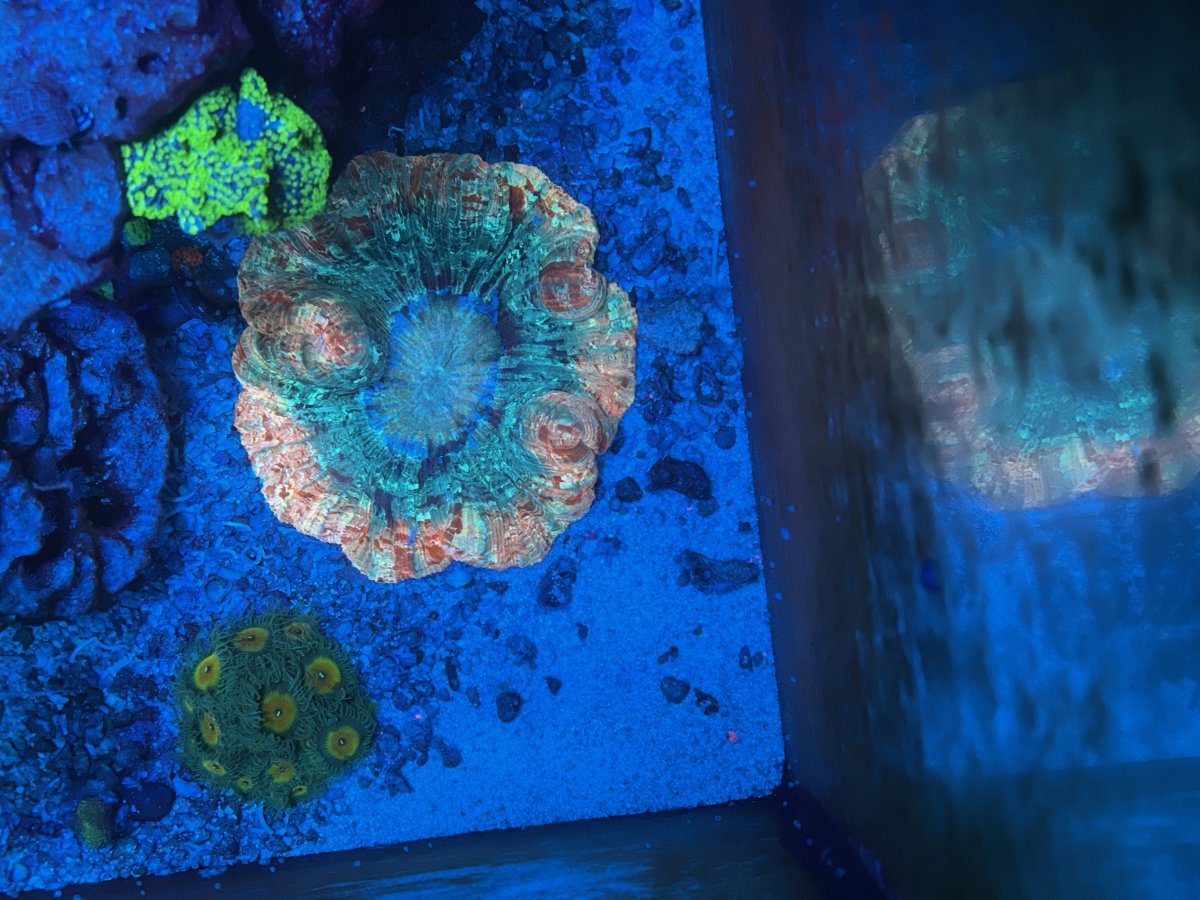 PraziPro on DT with Maxima and urchin