drawman said:
I follow clammania too but don't know much about them. You got some nice ones!
Click to expand...

From what I know, they raise captive-bred clams and quarantine them for at least 3 months in their California systems. They have a great selection of multiple species of clams and are ready to help when you need it. Looking for a few more clams, and that's where I will very likely be getting them from. 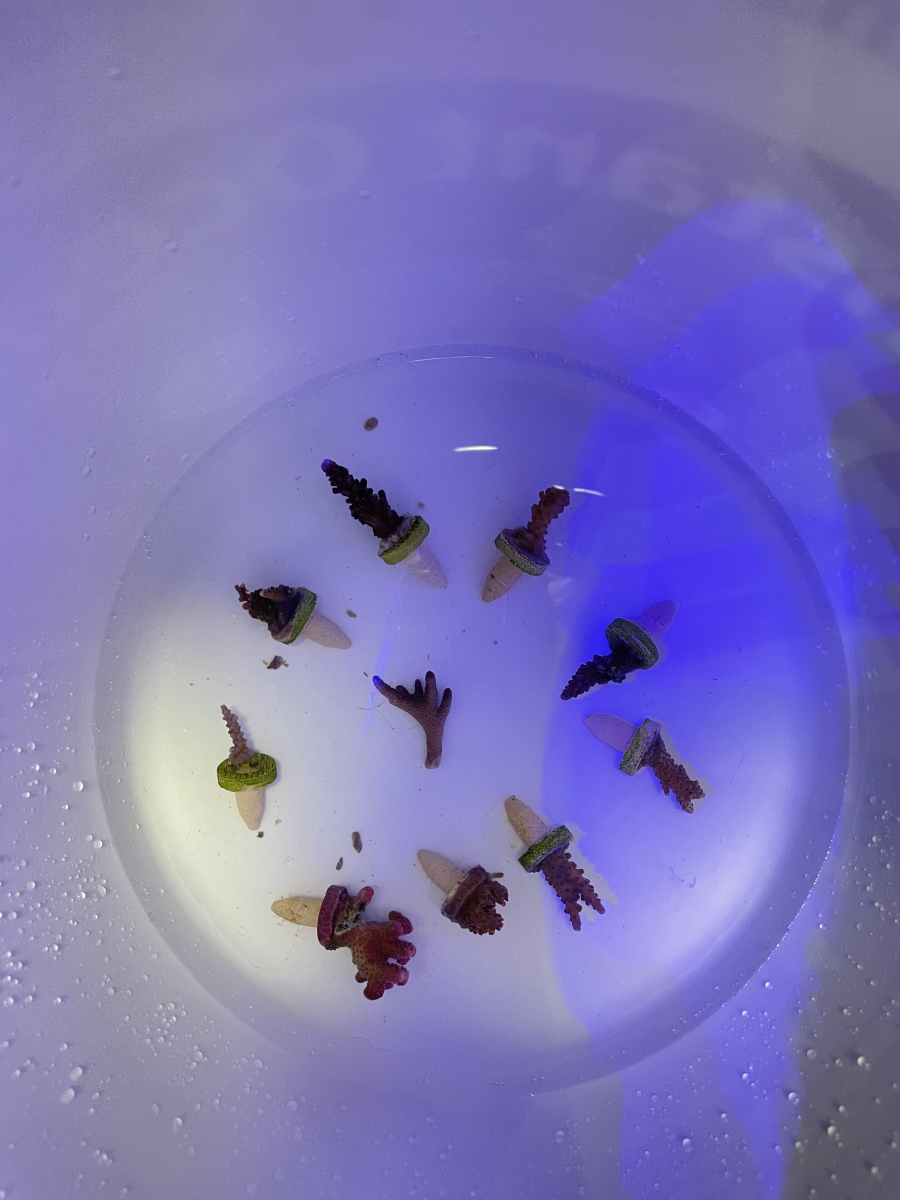 Rating - 0%
0   0   0
Been super busy plumbing a new surprise tank I've been working on for the past year!! Almost done Will post pics tomorrow!

In the meantime, some semi-recent shots I've taken: 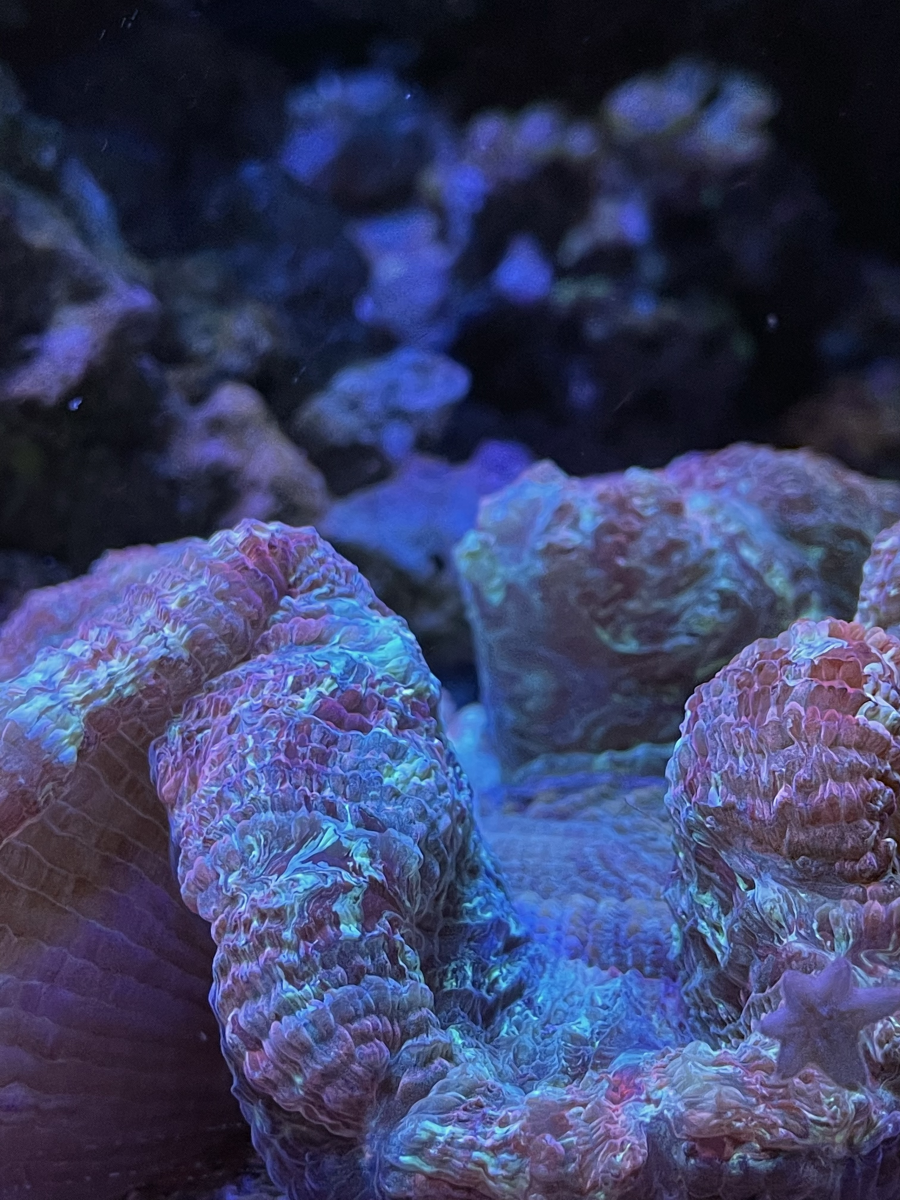 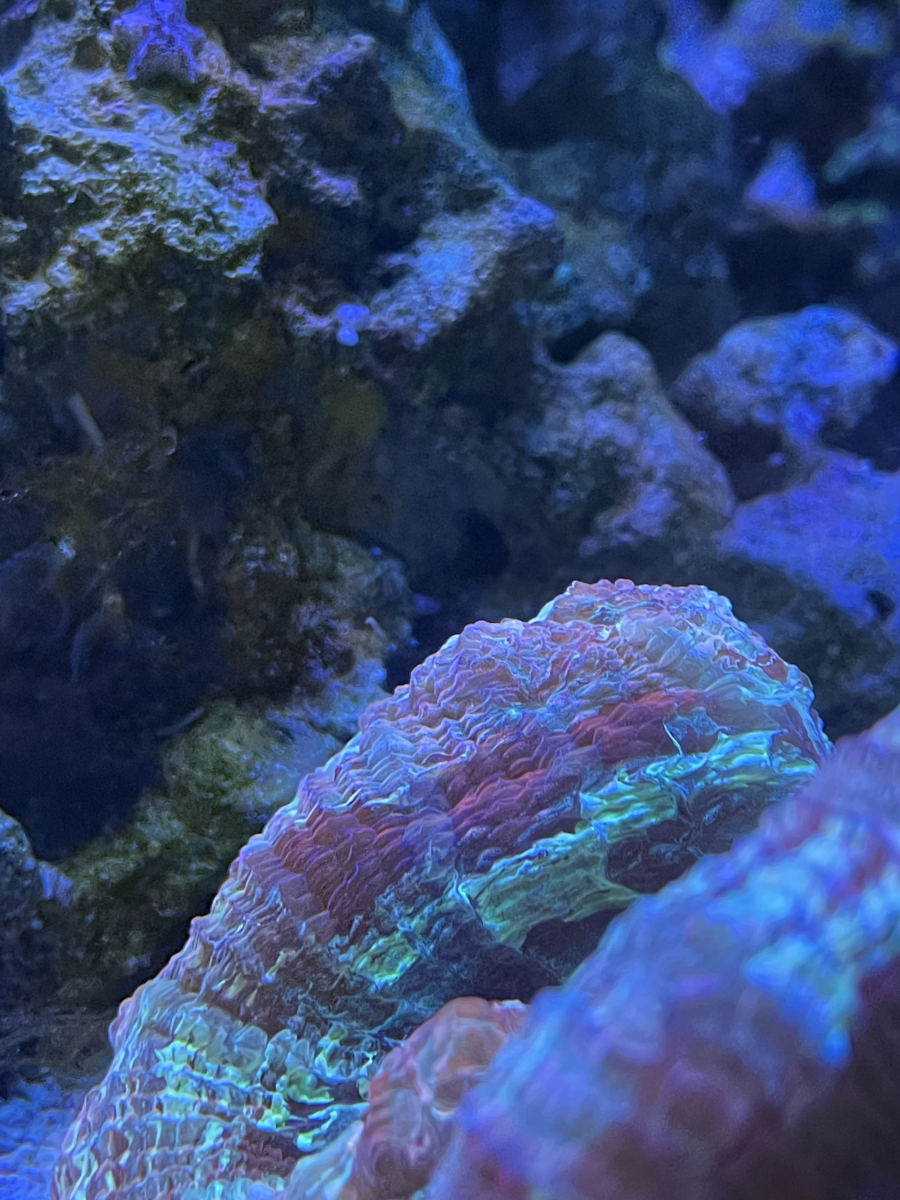 Rating - 0%
0   0   0
Updates, updates, updates...
I just realized how long it's been since I've updated this thread!
Mostly good things have happened since my last post, haven't lost any coral, but I did end up losing my baby maxima to pyramid snails. Oddly enough, the crocea and derasa have not been affected really at all by them, but I'm keeping my eye out.
Speaking of snails, I added one or two stomatella snails that came as hitchhikers on a frag, and for the first time, I was successful in having them breed in my tanks! I've tried this a few times before, but the six line wrasse always took care of them before they had a chance to breed. Now I have them crawling all over, and they keep making more babies because there is plenty of algae in my tank lol.

At this point, I feel like my reefing mindset has shifted to not caring about algae as much as coral health. Sure, I have a bunch of hair algae, but I've also never seen growth like this before from any of my corals.

Lastly, the big surprise that I was hinting at in the last post was the setup of my clam/shallow cube tank that I plumbed into my main system. My plan for stocking it is mostly staghorns, clams, and sand-dwelling LPS, but with the rise of pyramid snails in my system, I might not be able to fulfill my dreams as far as clams go. However, I'm excited to fill it with plenty of acros in the future!

I suspect that overfeeding and the auto water change system that I installed via Hydros is the key to my current success at this point, but fingers crossed for the future.

Also, I noticed some bryopsis, and I'm deathly afraid that it will take over my system, but I feel prepared after many have taken the path of flucanazole in the past with similar tanks.

Here are some quick pics of the tank(s) that I snapped (ignore the dirty glass and algae for now haha): 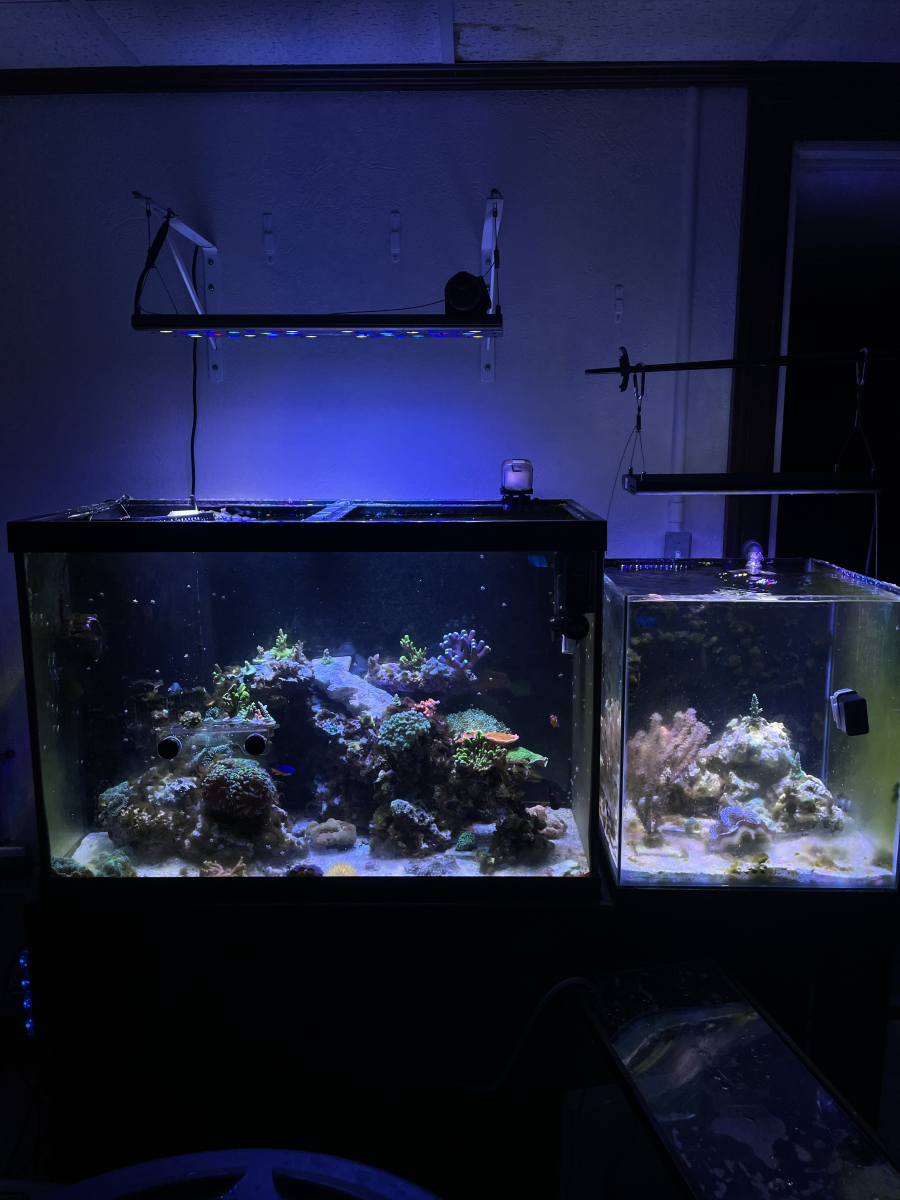 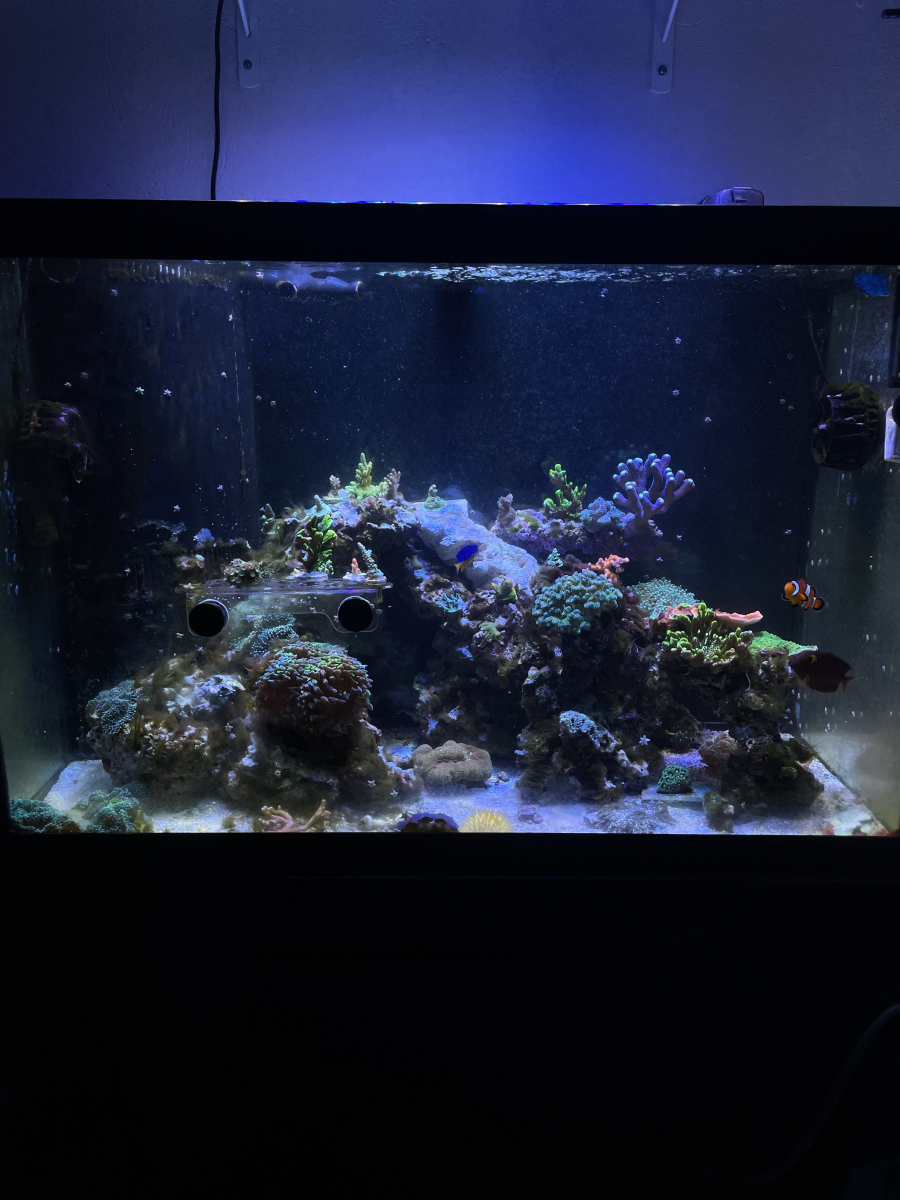 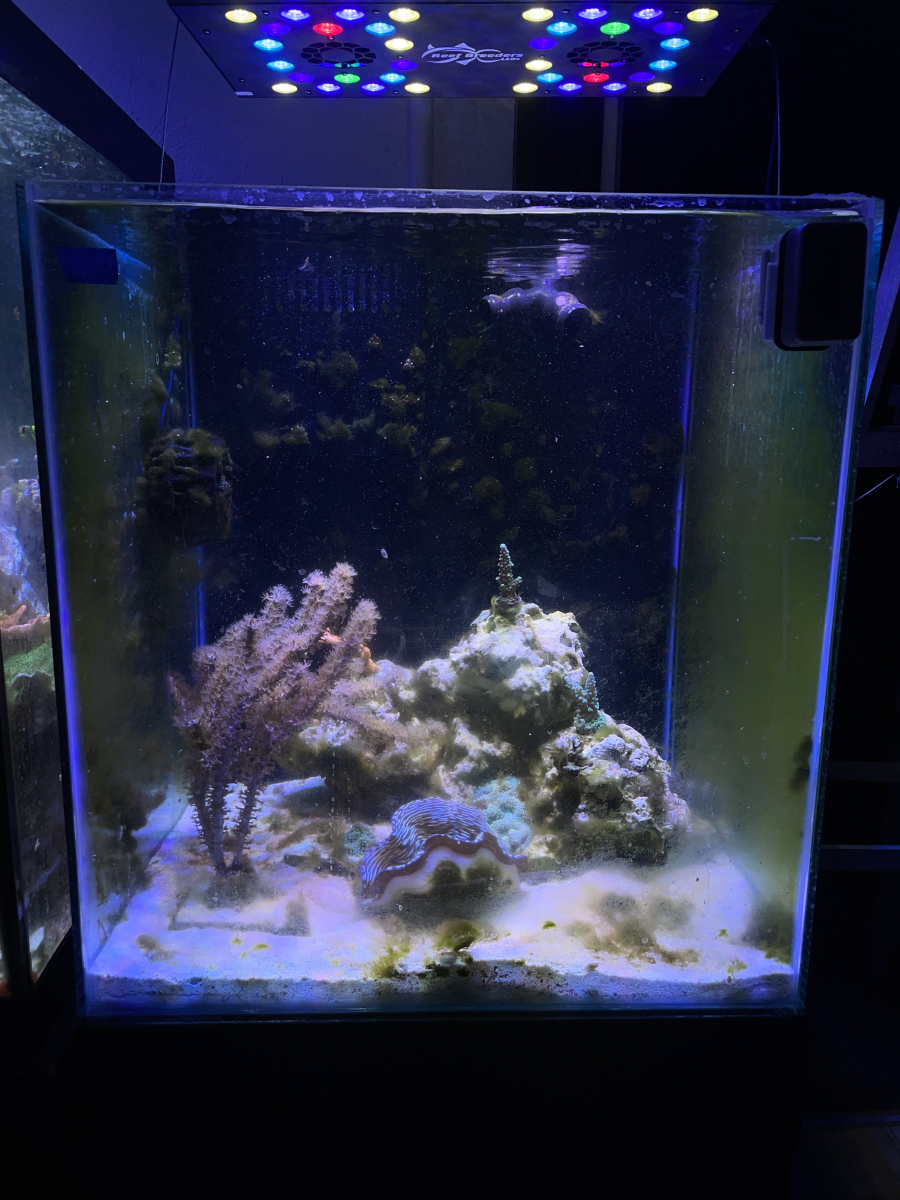 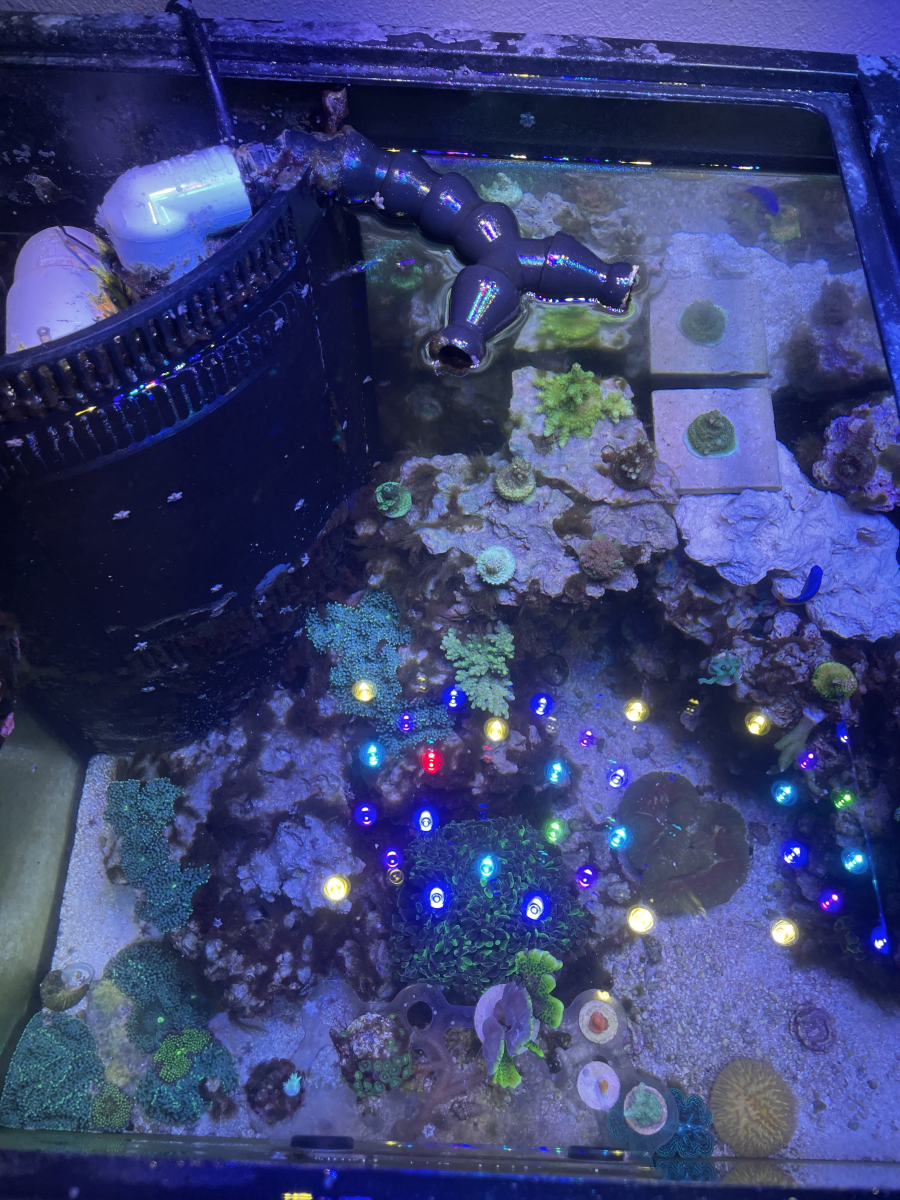 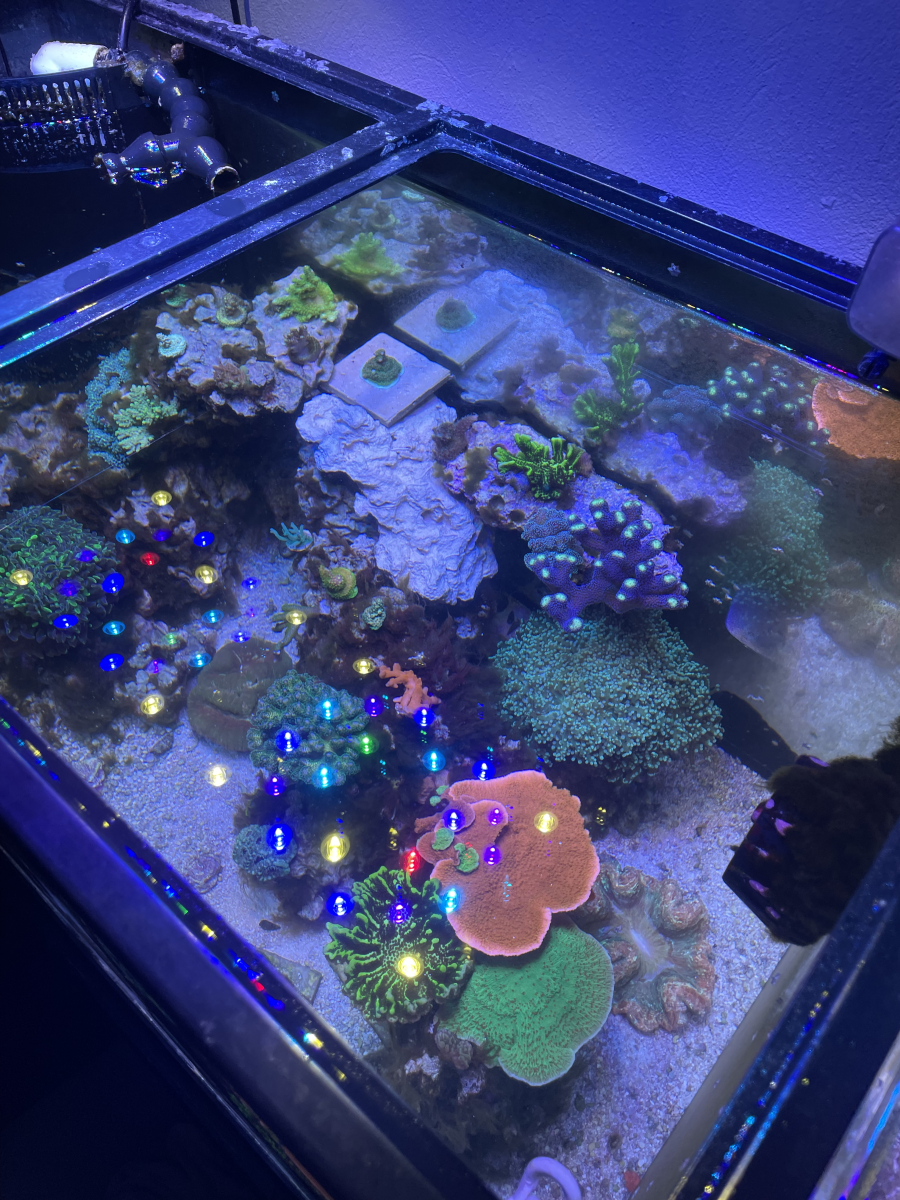 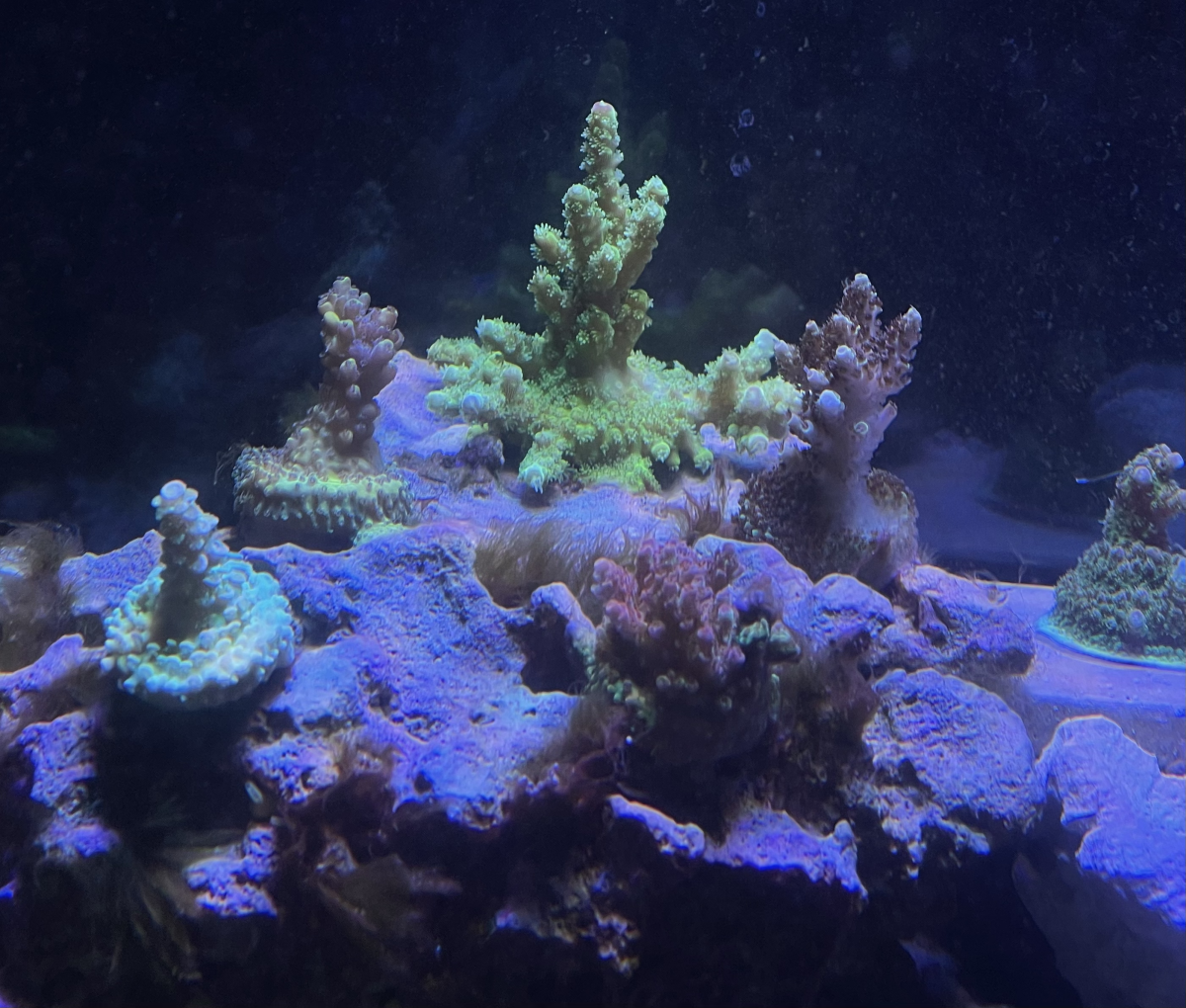 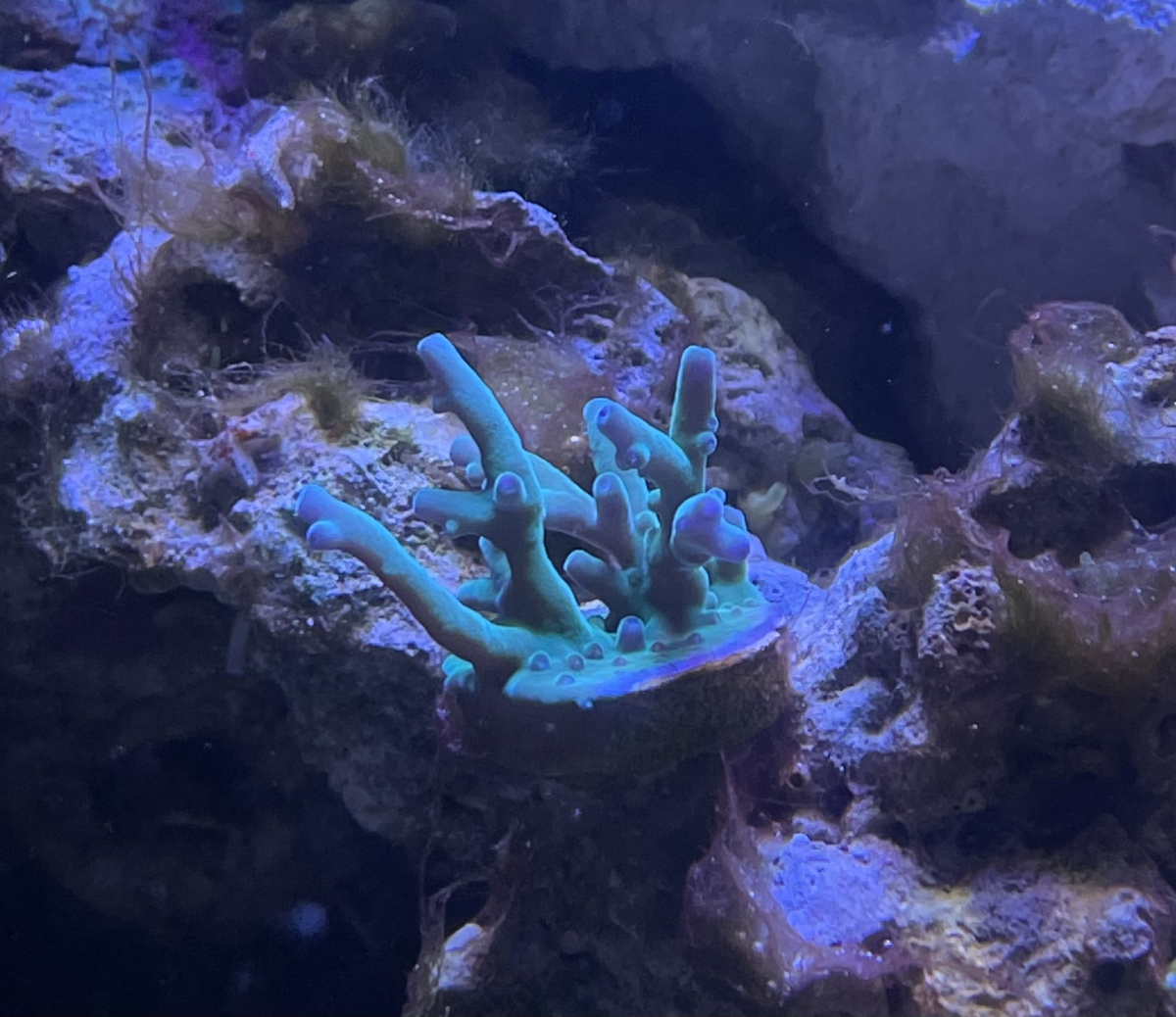 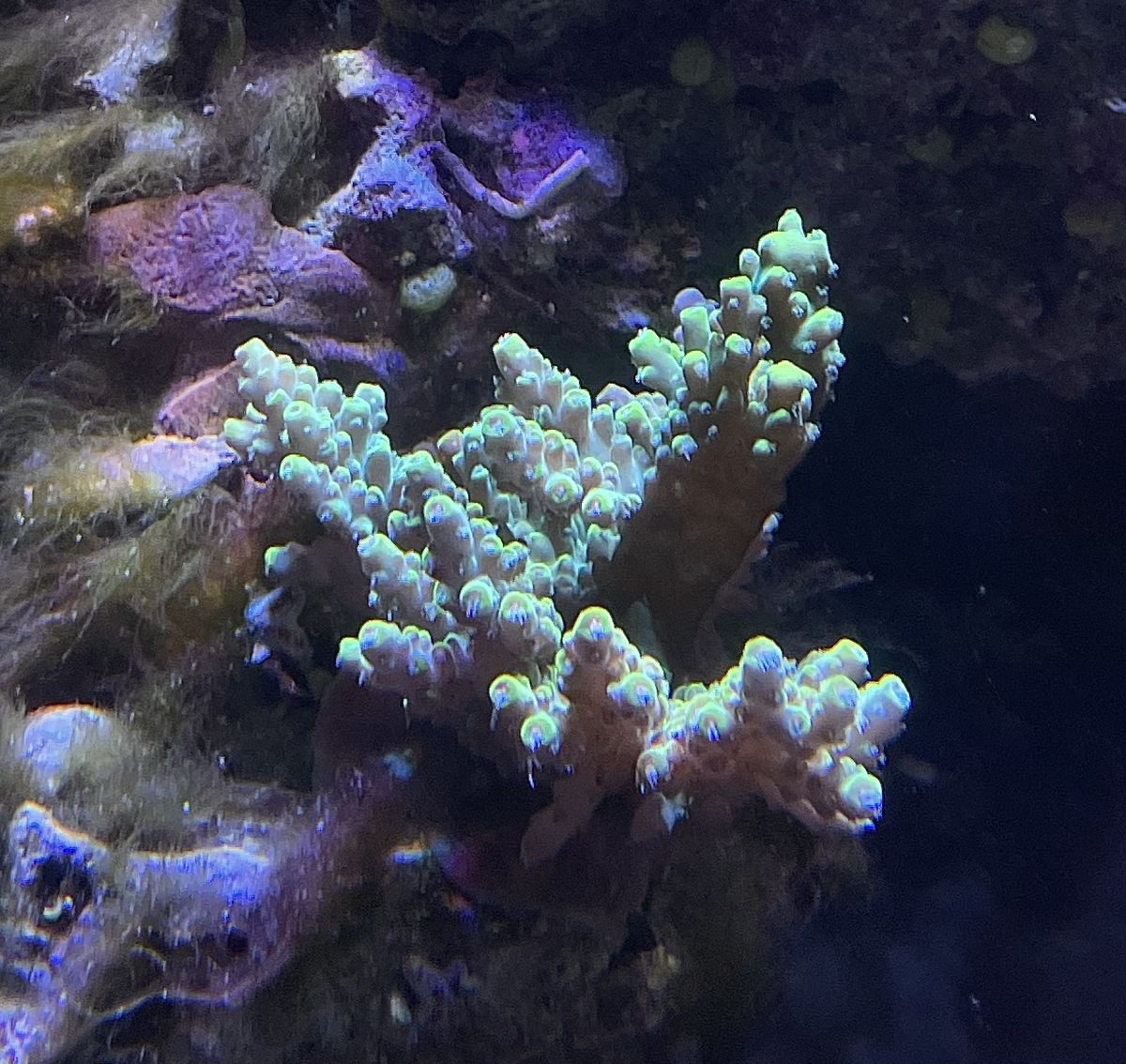 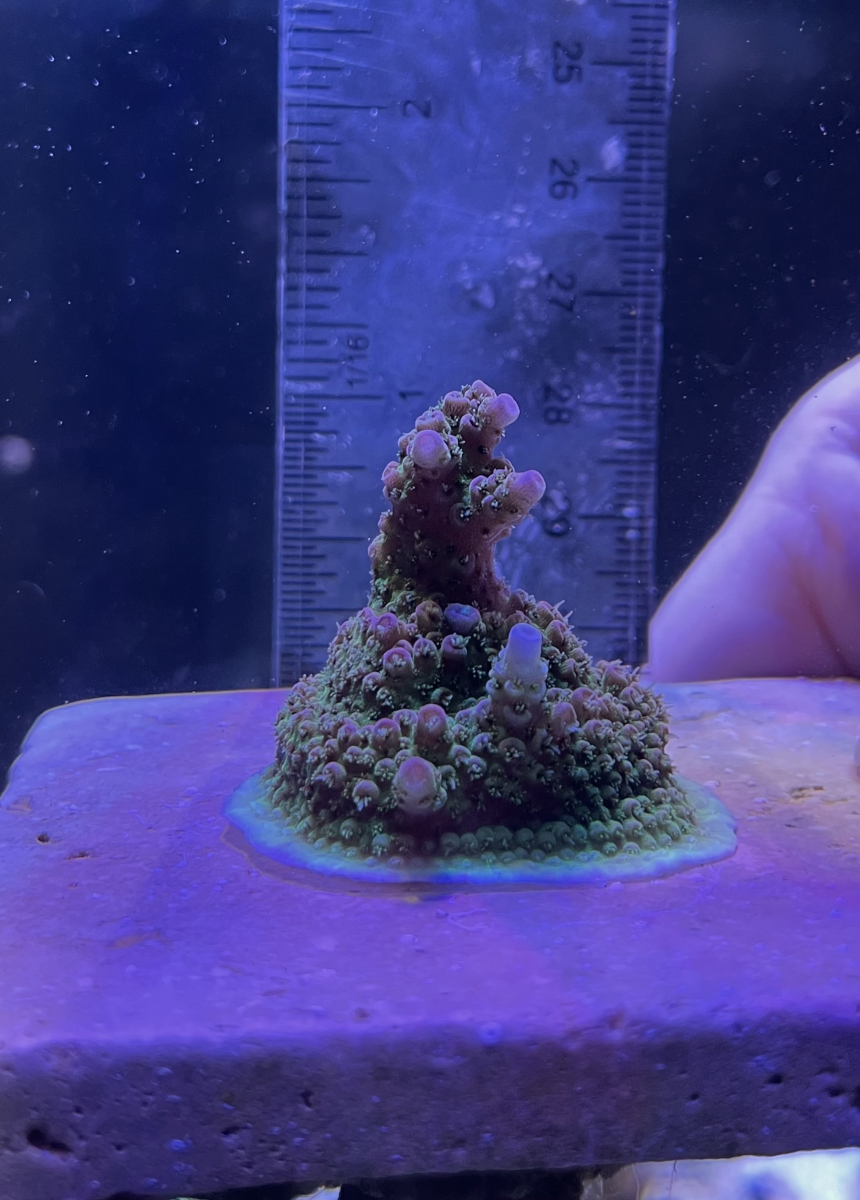 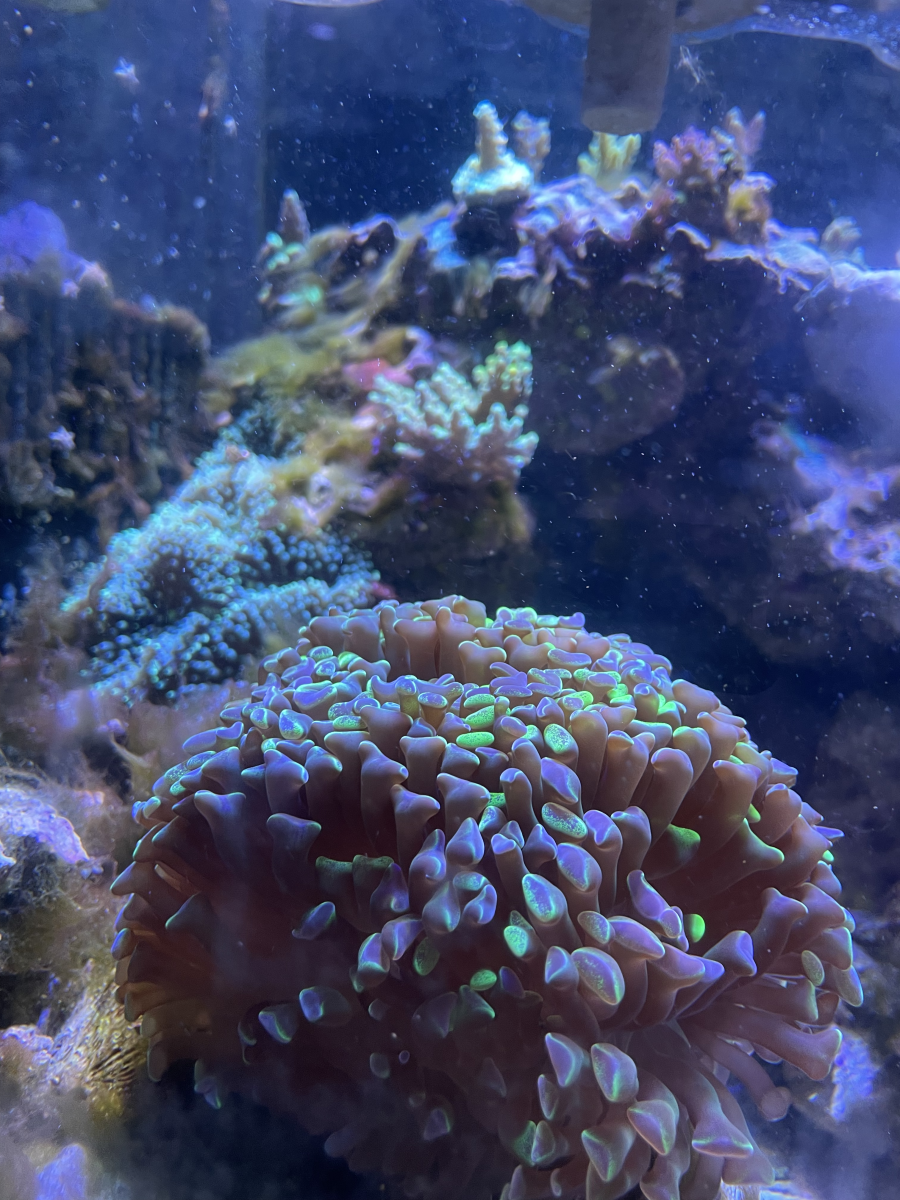 Rating - 0%
0   0   0
I will have to post more pictures soon... Got rid of a bunch of algae manually, and trying my hand at a Lettuce sea slug Elysia clarki to handle some bryopsis in the cube tank. Also, I noticed that everything was growing a little slower recently, then checked my alk and realized it was at 6.7, which is not ideal. On the bright side, this is a good problem to have, and I bumped up the dosing by another 10mL a day for both calcium and alkalinity. I have a slight problem with cyano, but it might have been caused by the addition of dry rock and live sand in the cube tank, and I think it will go away on its own. I've started bacteria dosing some microbacter7 everyday to add more bacterial diversity and potentially outcompete the cyano, but I don't think it will have much of an effect.
Everything else looks pretty good though!
OP

av99 Orange Crush, BC Queen Wasp, BC Rainbow Table, BC Raindrops on Roses under daylight 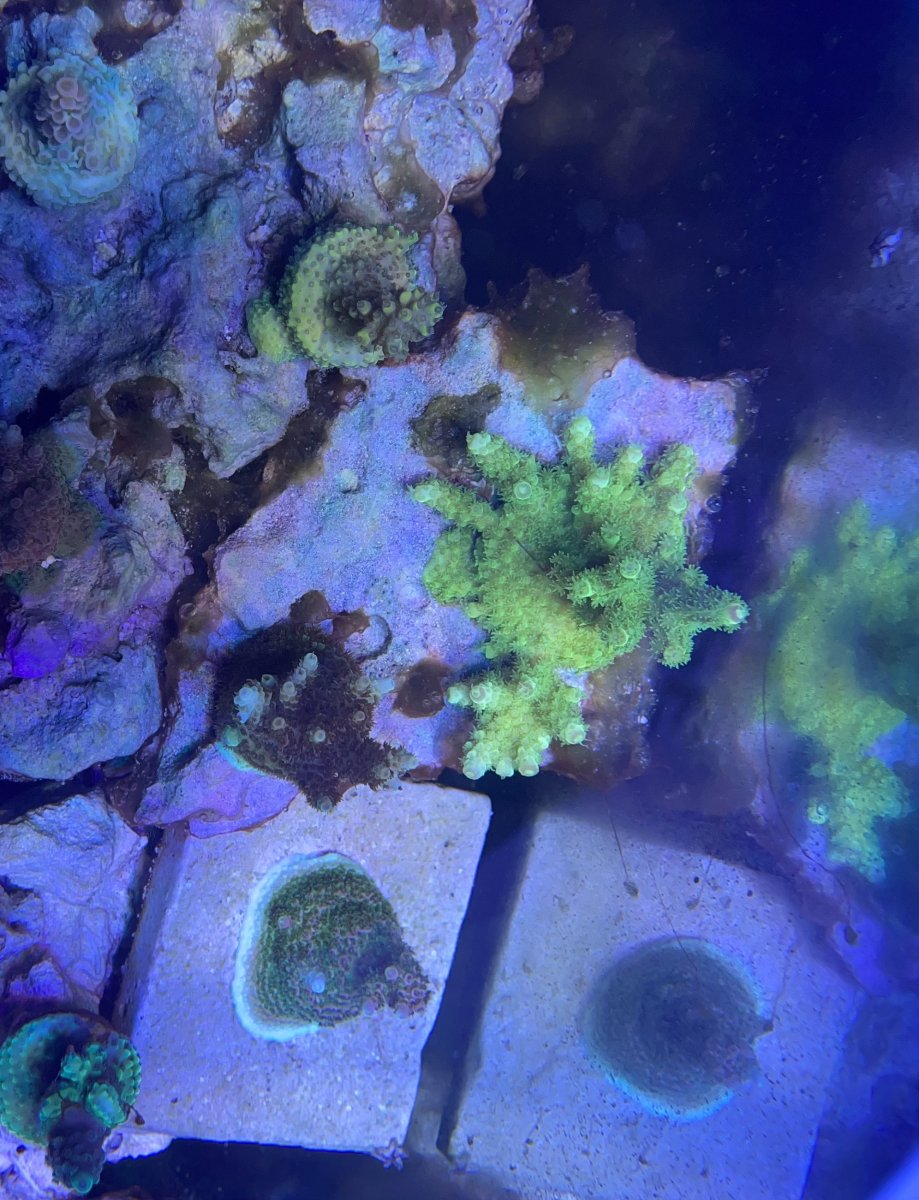 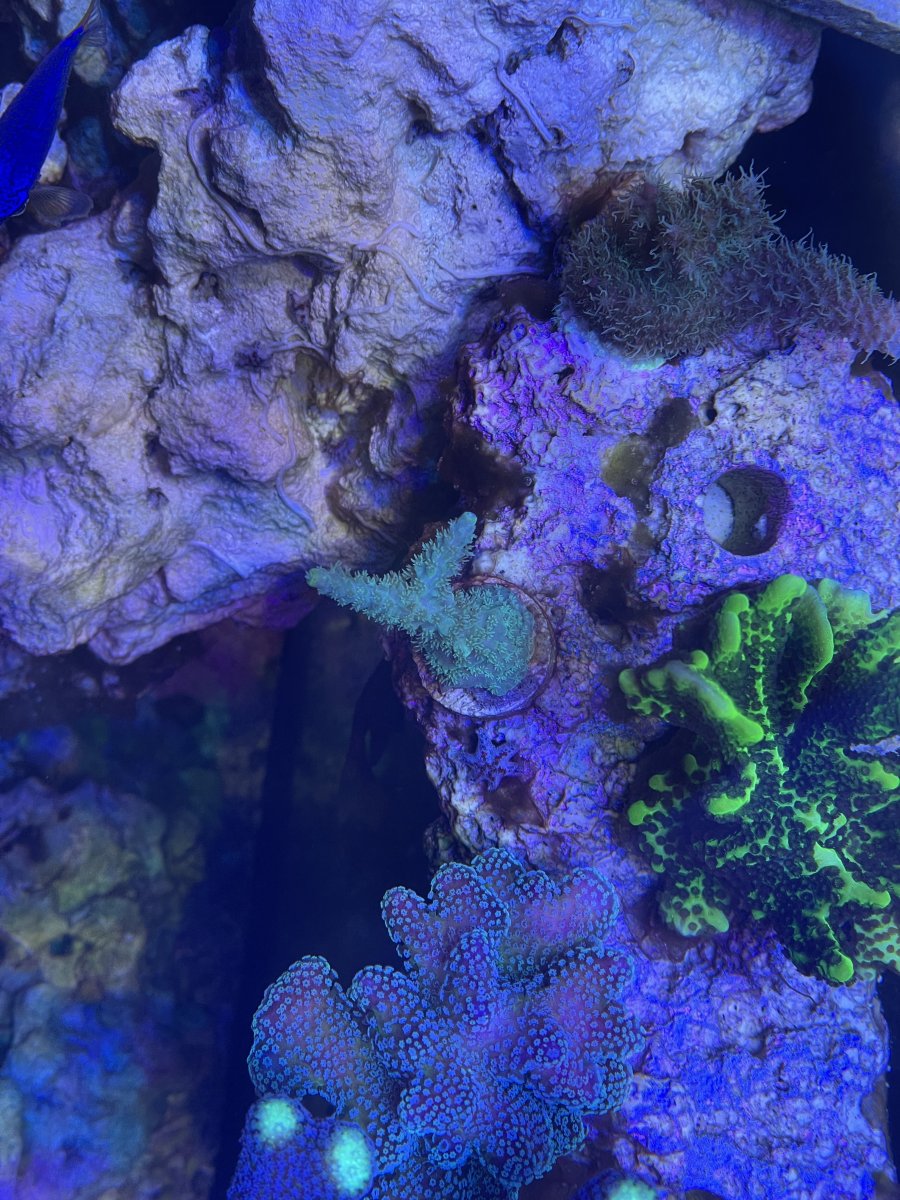 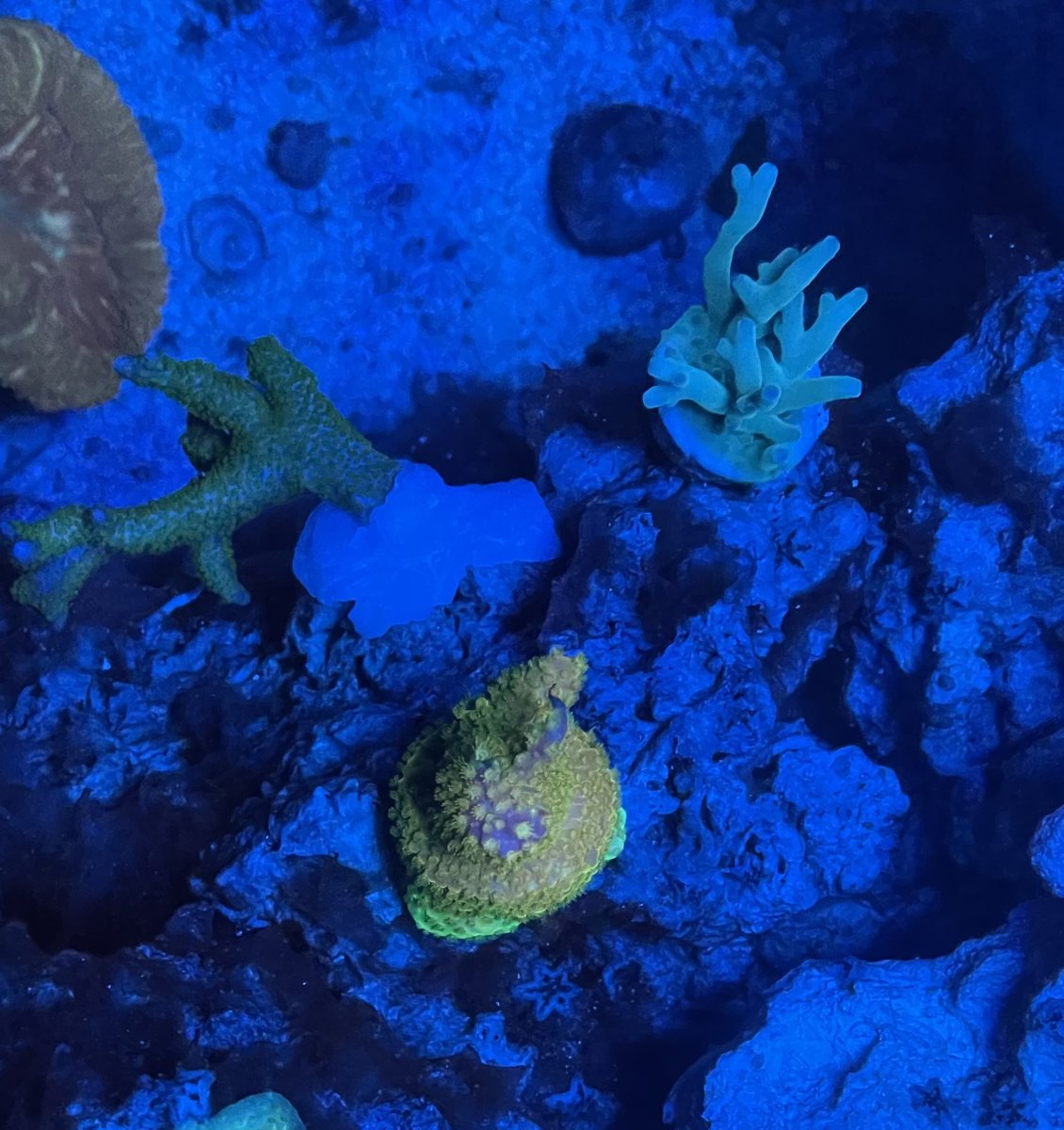 BC Rainbow Table, BC Raindrops on Roses, and others under actinics 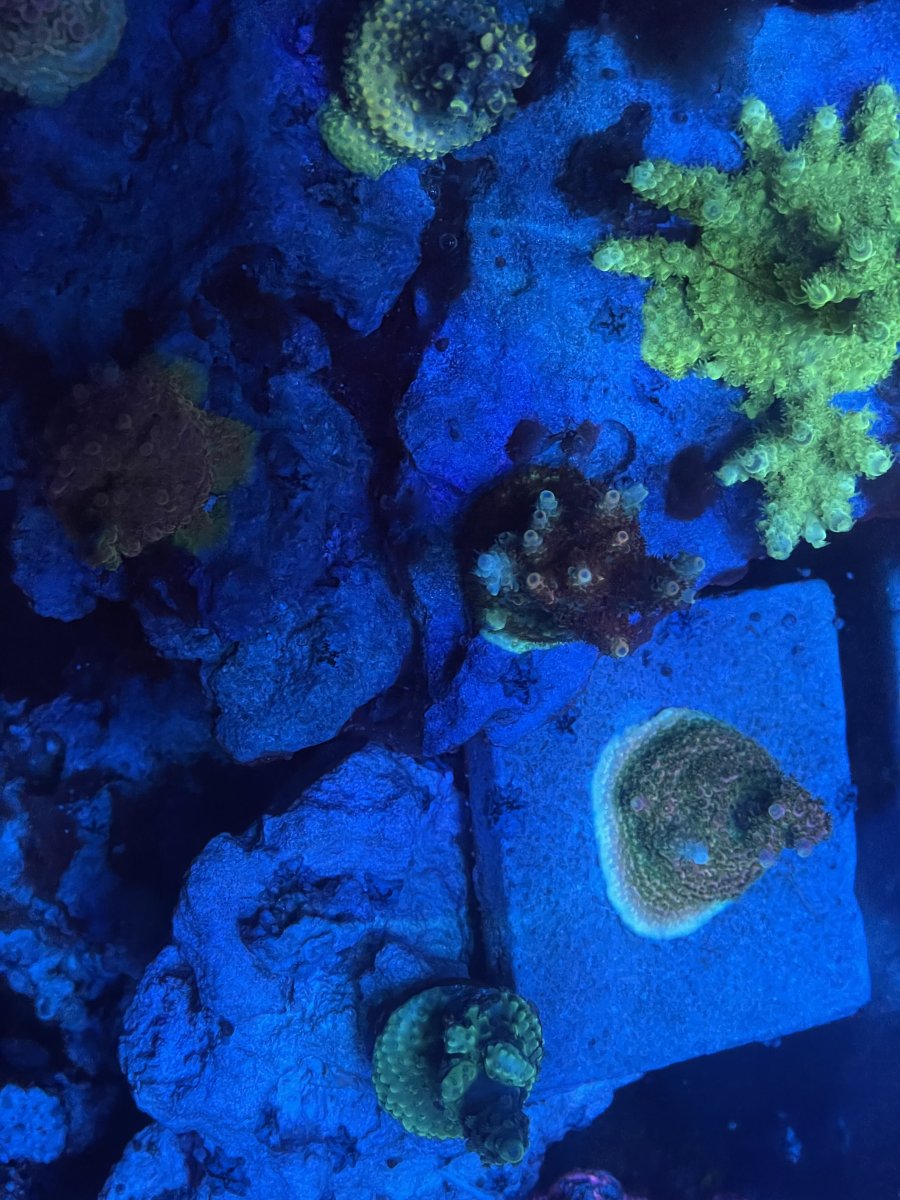 TAC Splash of Rainbow (actinics)
I have mixed feelings about this one. I generally avoid blue light tenuis because I prefer corals that look good under daylight too, but it's fun to watch it slowly color up I guess. Only tenuis I really want is a Walt Disney or something that looks nice under whites too. 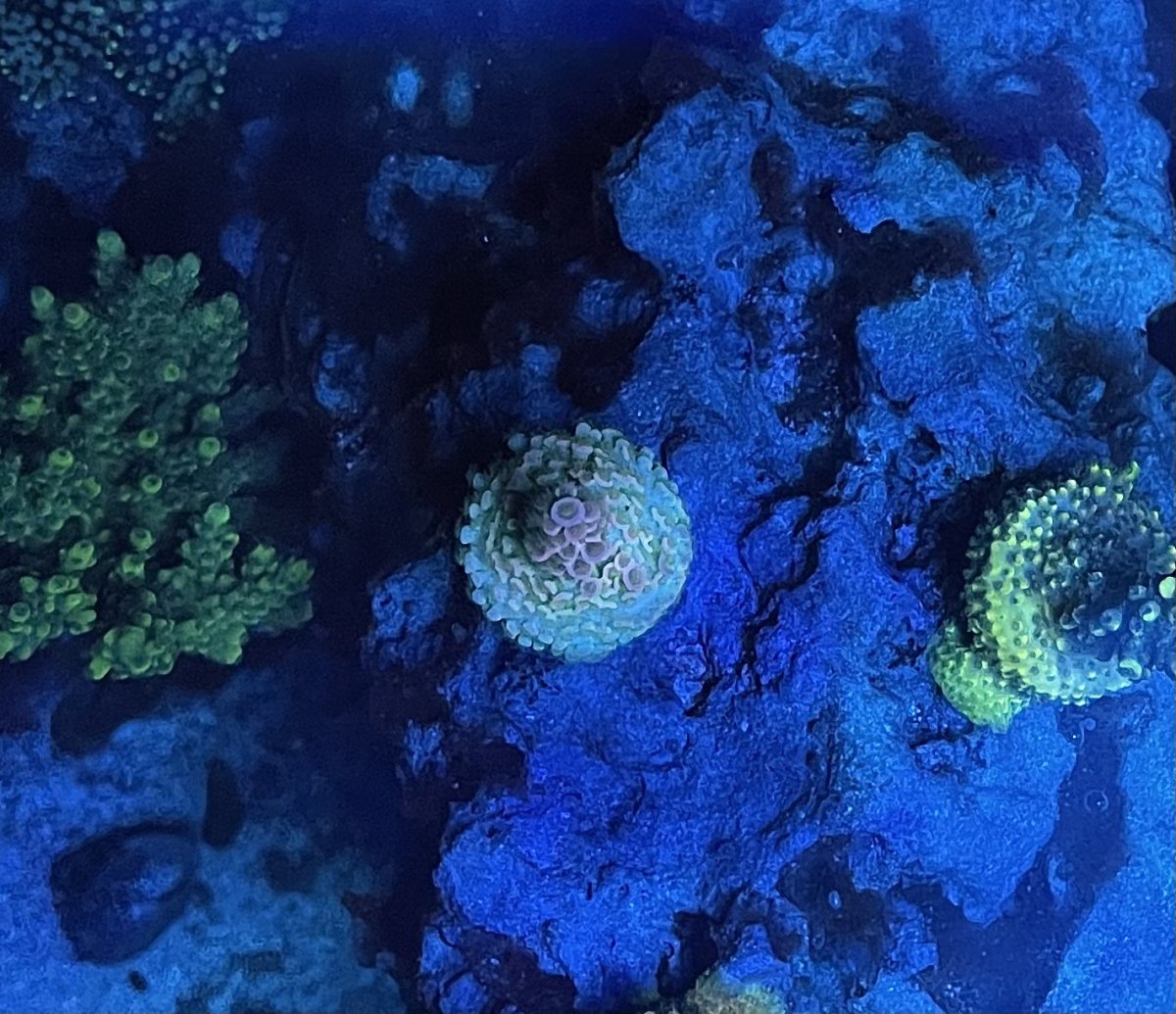 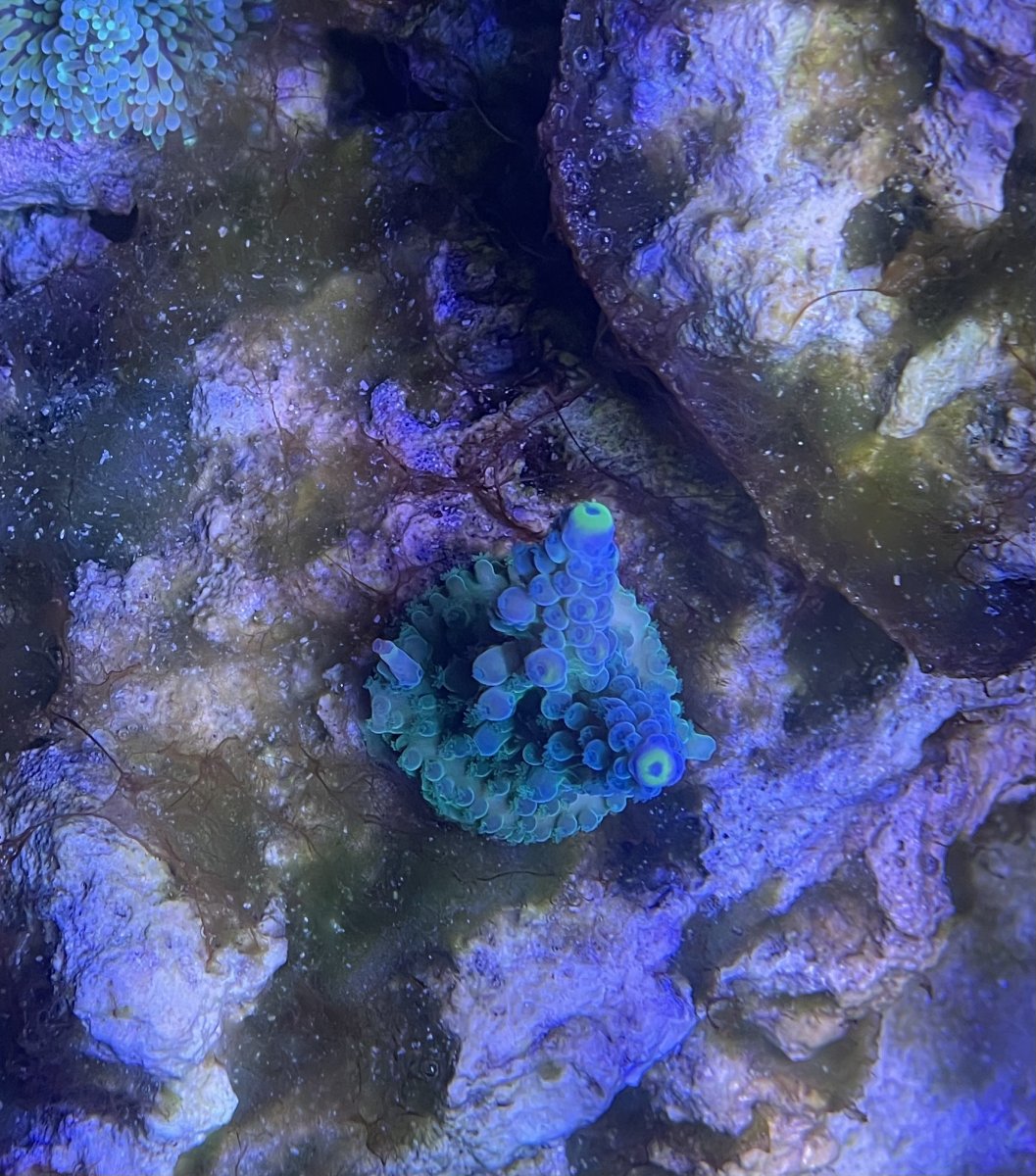 Forgot Name Super Shaggy Thing (daylight)
I love this acro! Shaggiest thing I've ever seen, but I'm still trying to figure out its growth pattern. At first I thought it was a table, but now its shooting branches like a stag or something. 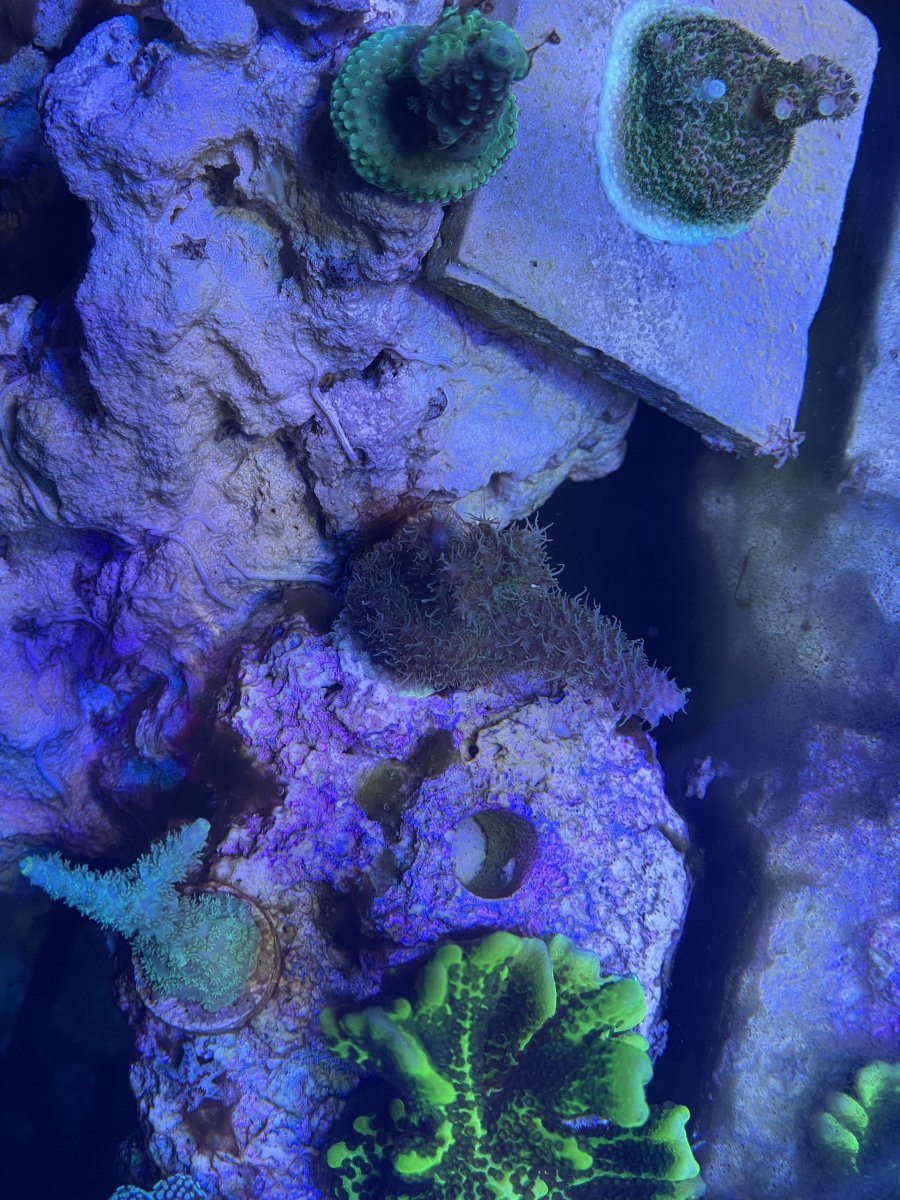 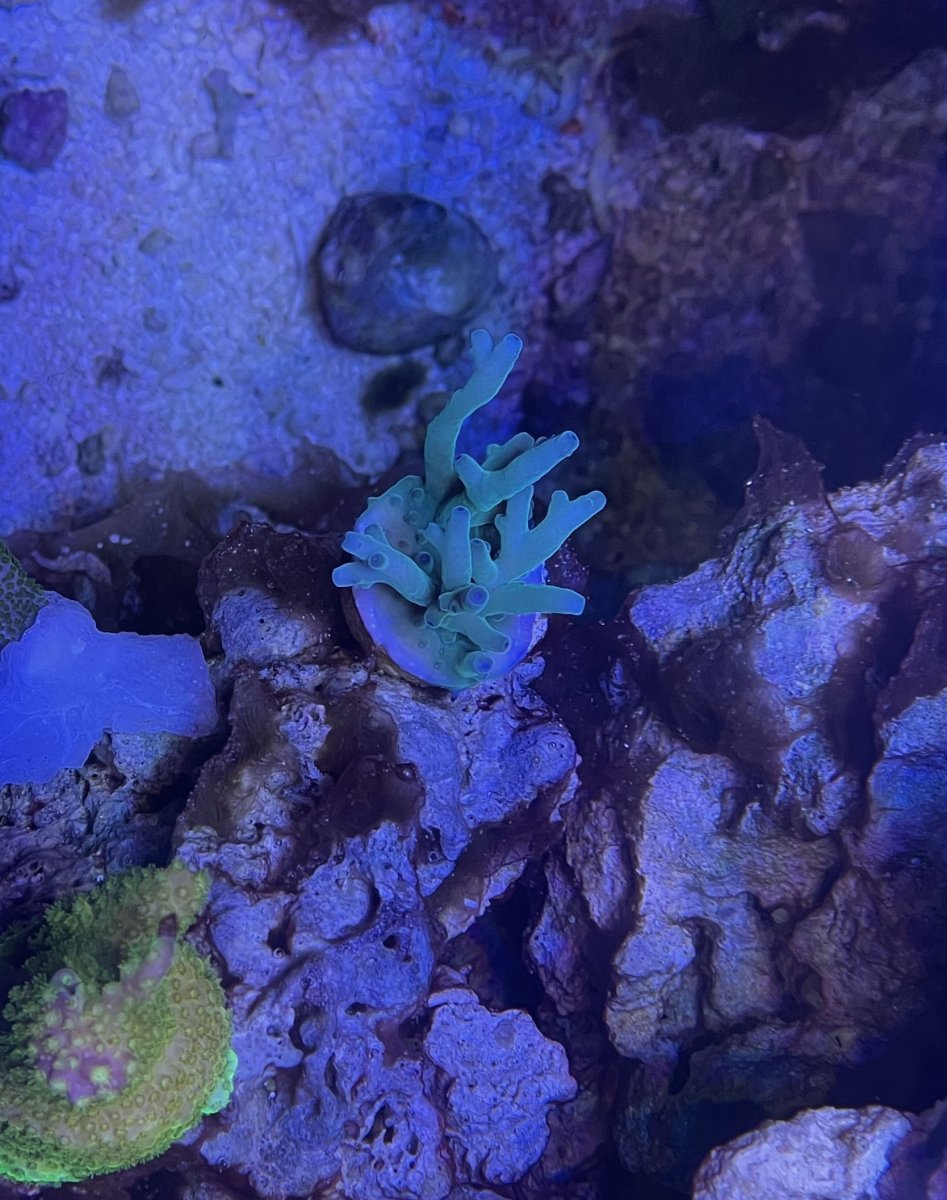 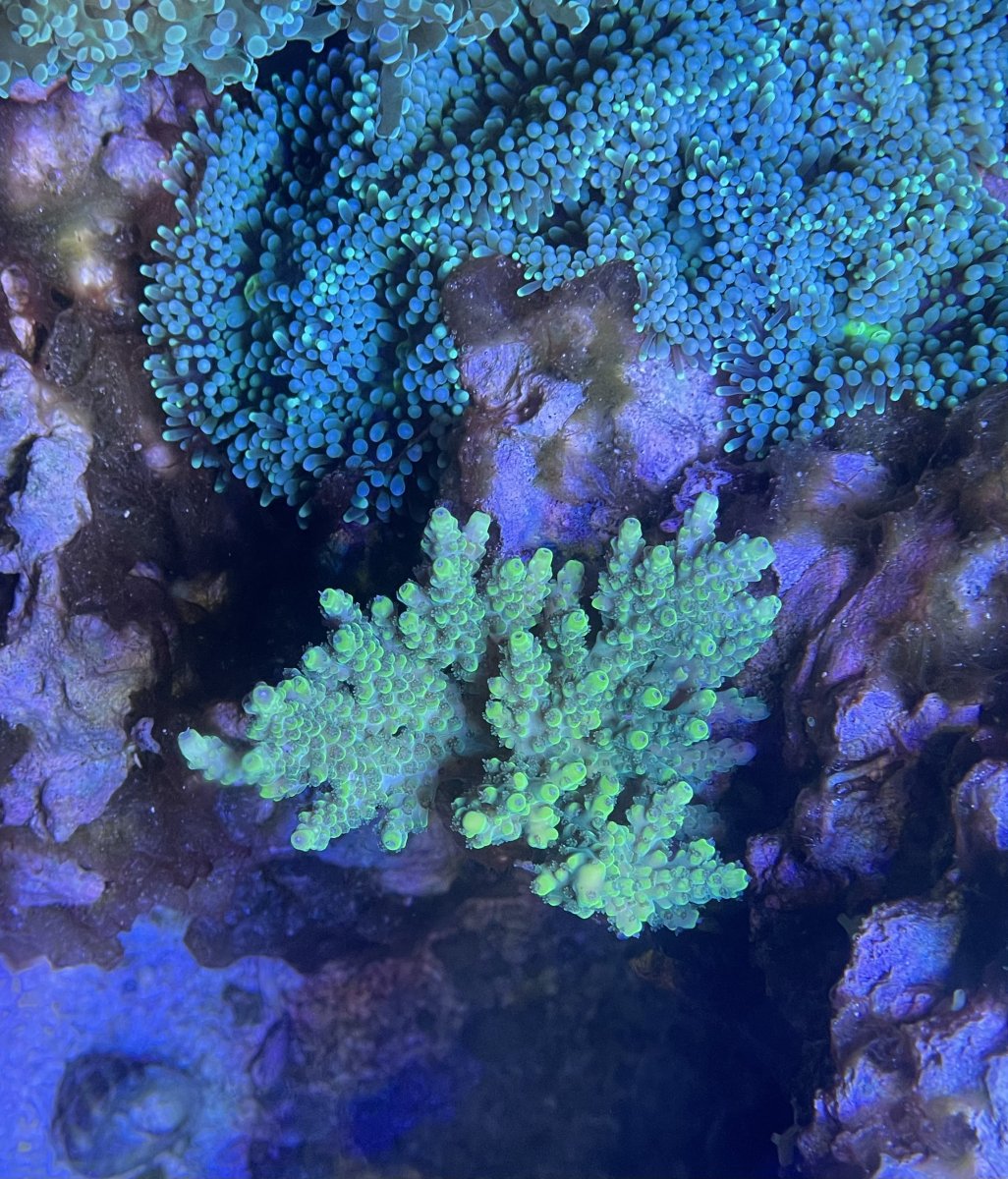 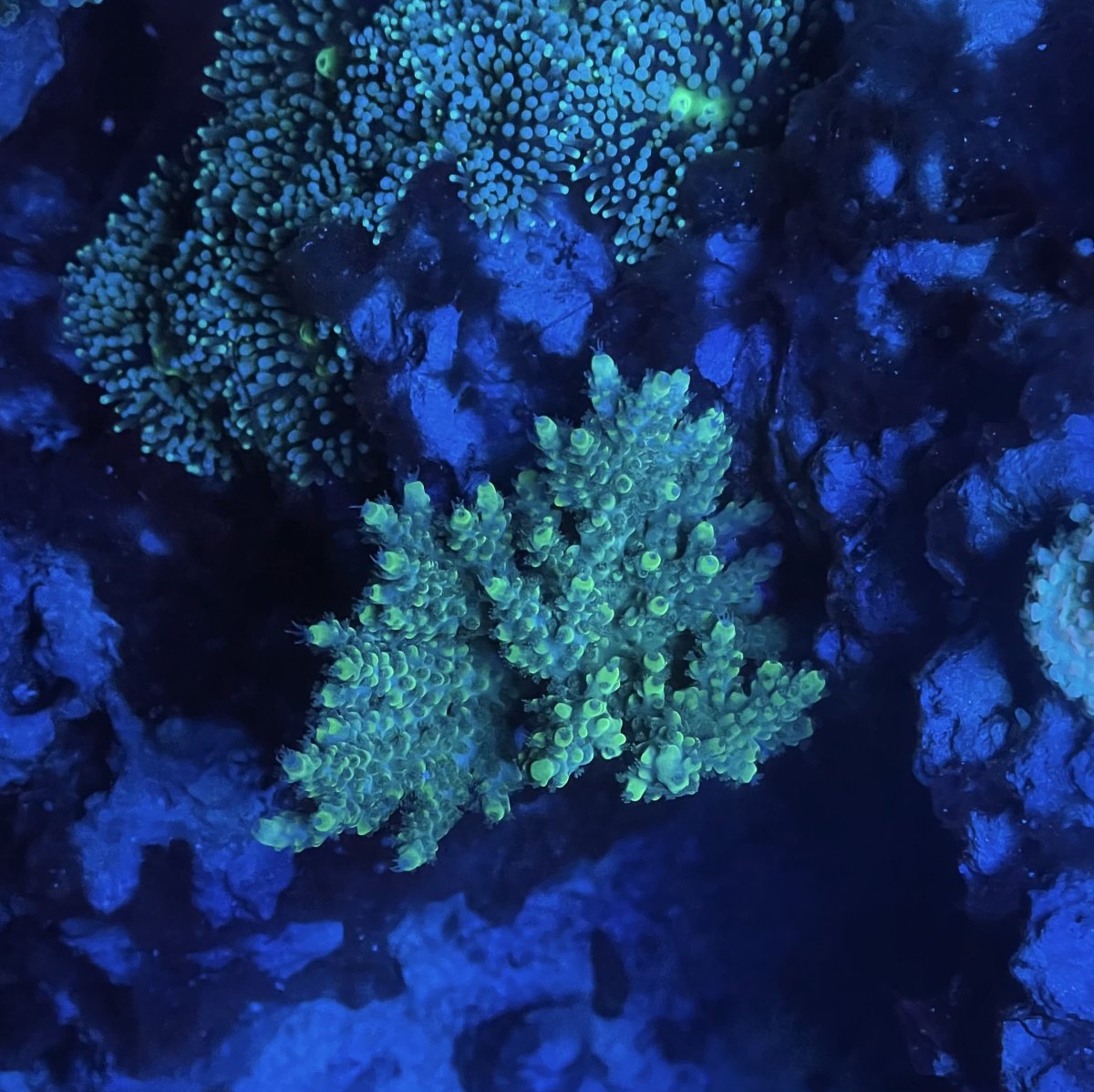 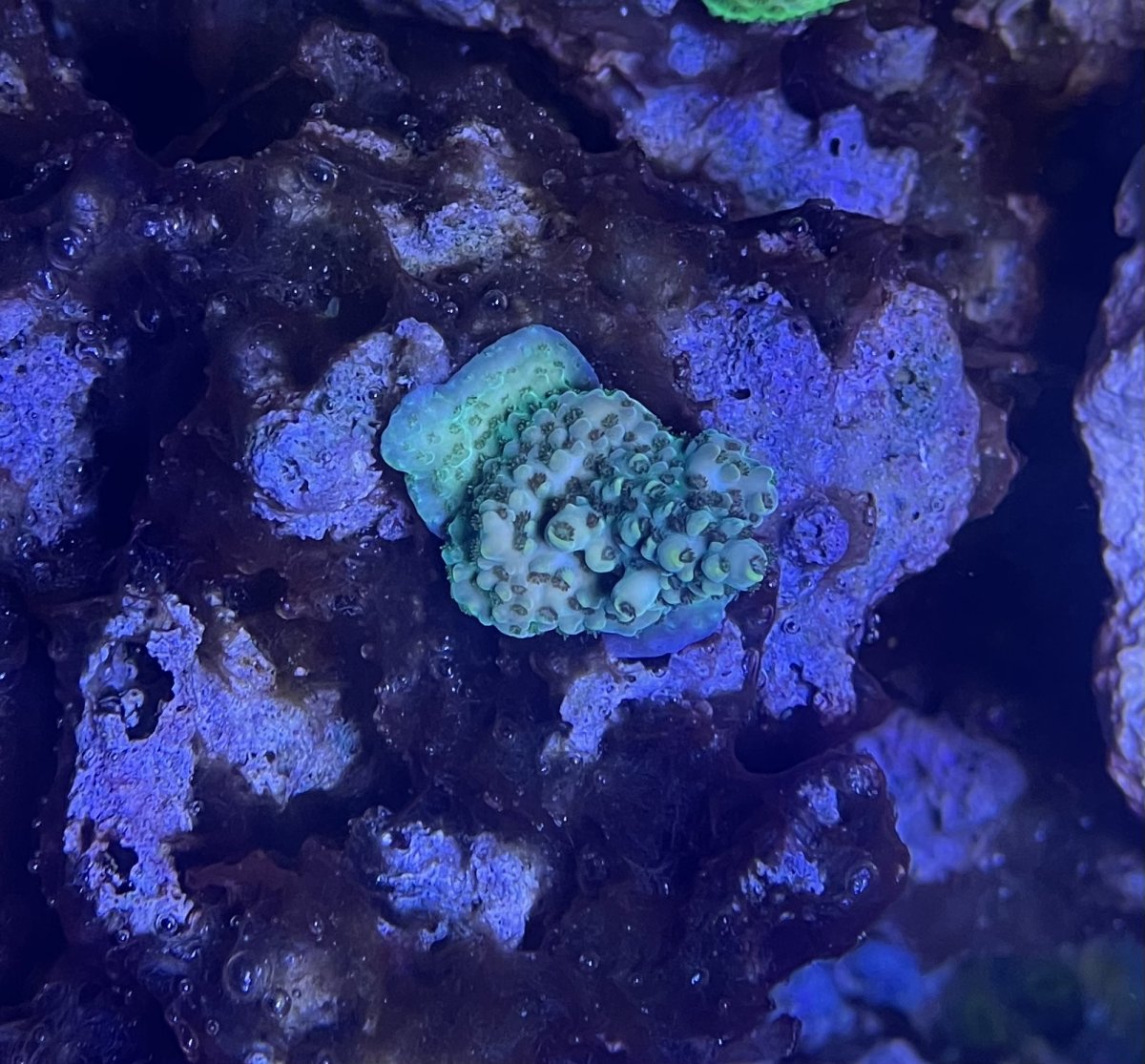 Rating - 0%
0   0   0
Figured I would drop these FTS from New Year's Day here. Also, I never posted much about the addition of the clam/acro tank onto the main tank, and I'm especially proud of the plumbing, so maybe that will come sooner or later haha 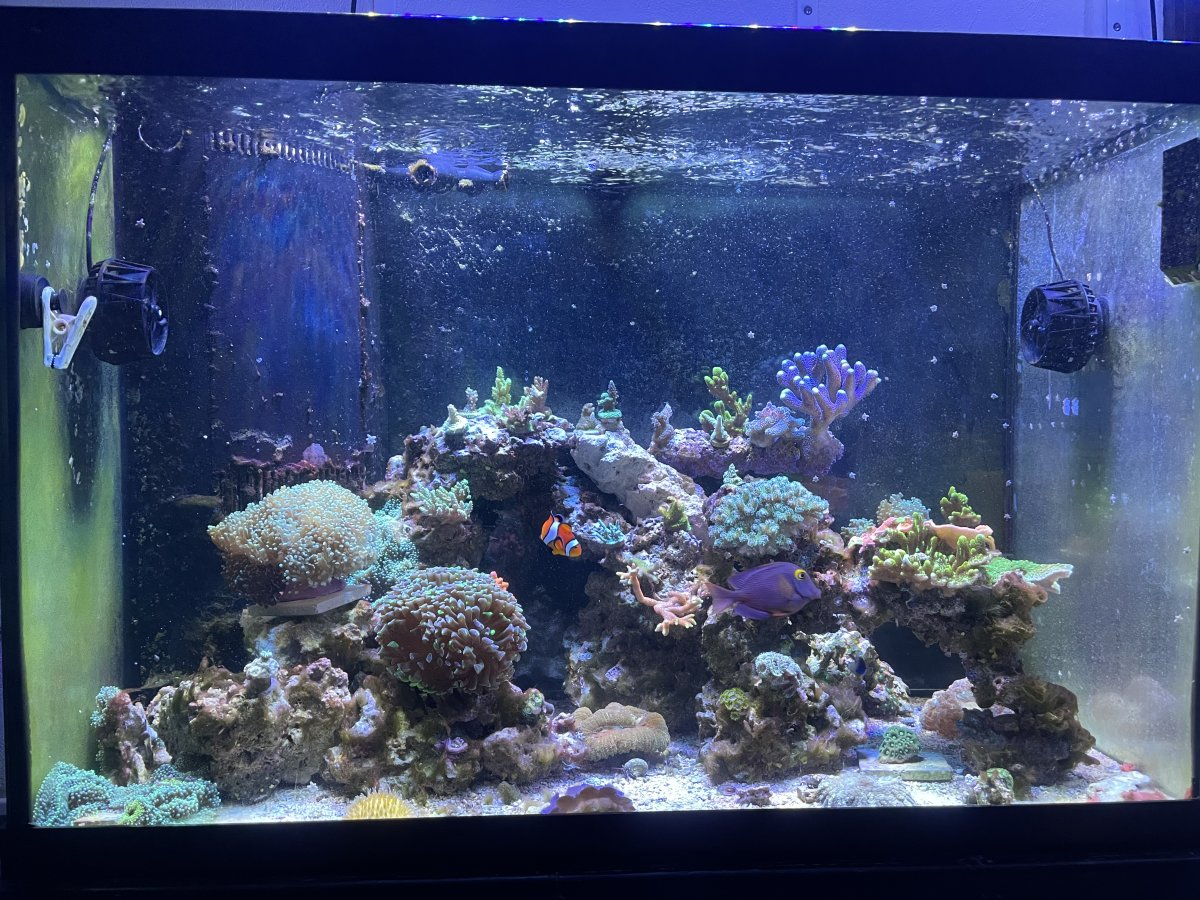 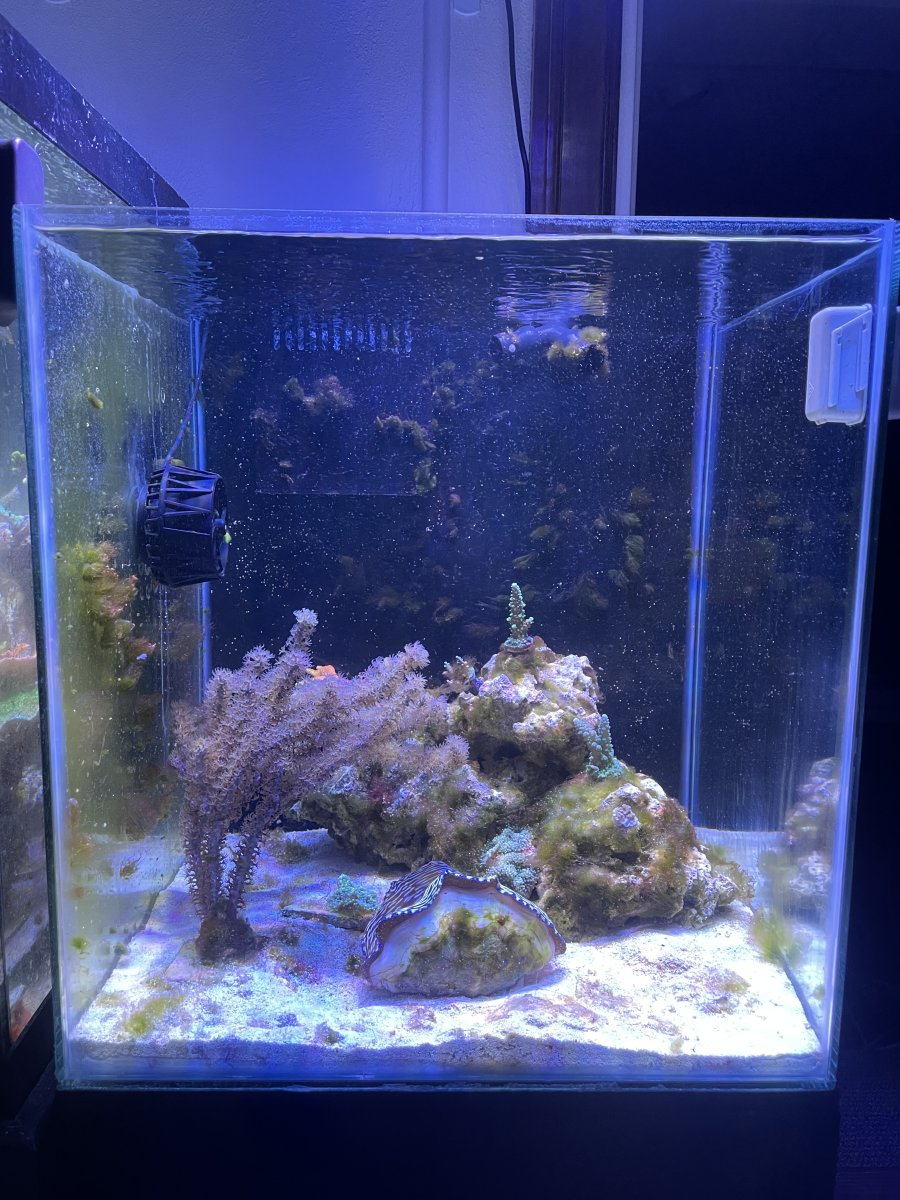 The entire system together: 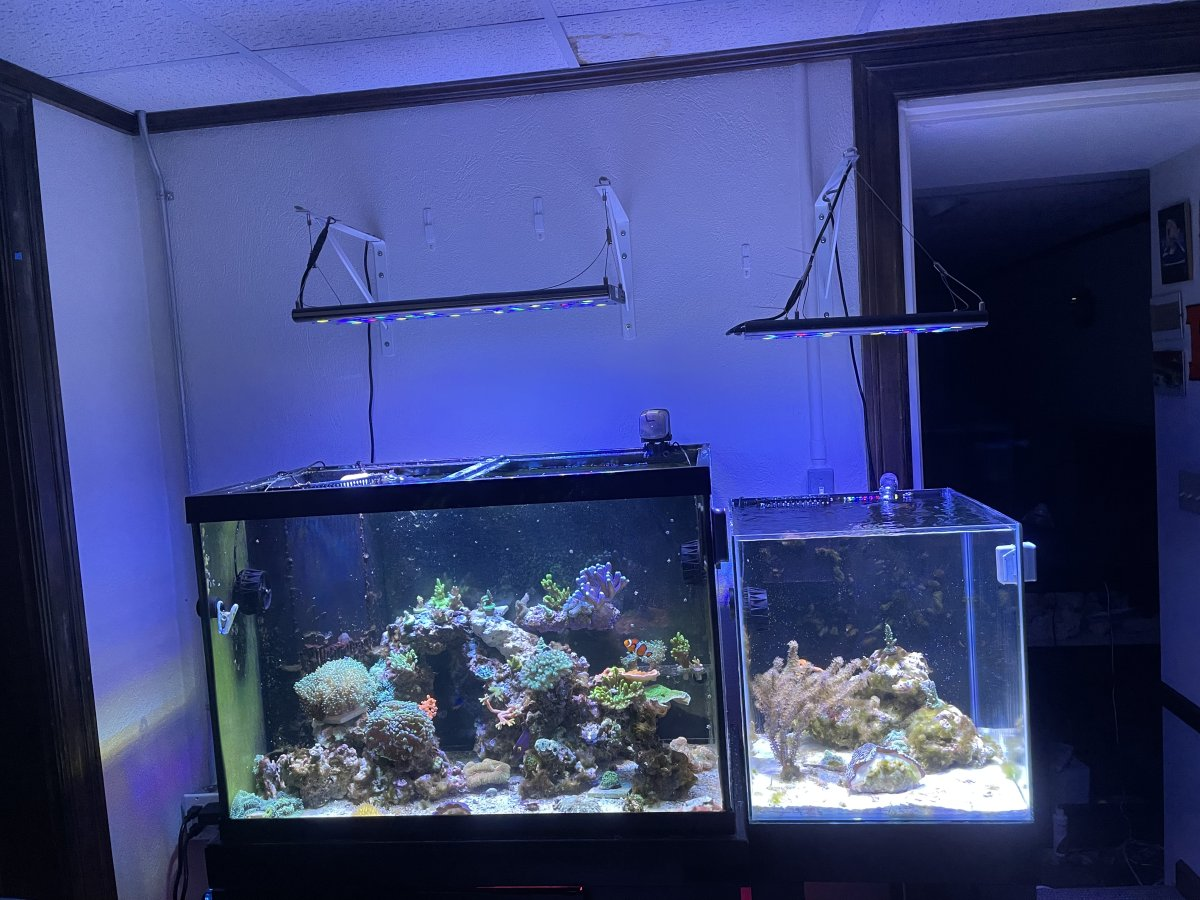 Rating - 0%
0   0   0
And an almost full tank actinic shot that I just snapped for fun a few days ago. Lots of growth growing on, especially in the tabling acros! I'm going to have to start pruning/relocating in a few months to keep them from stinging each other. 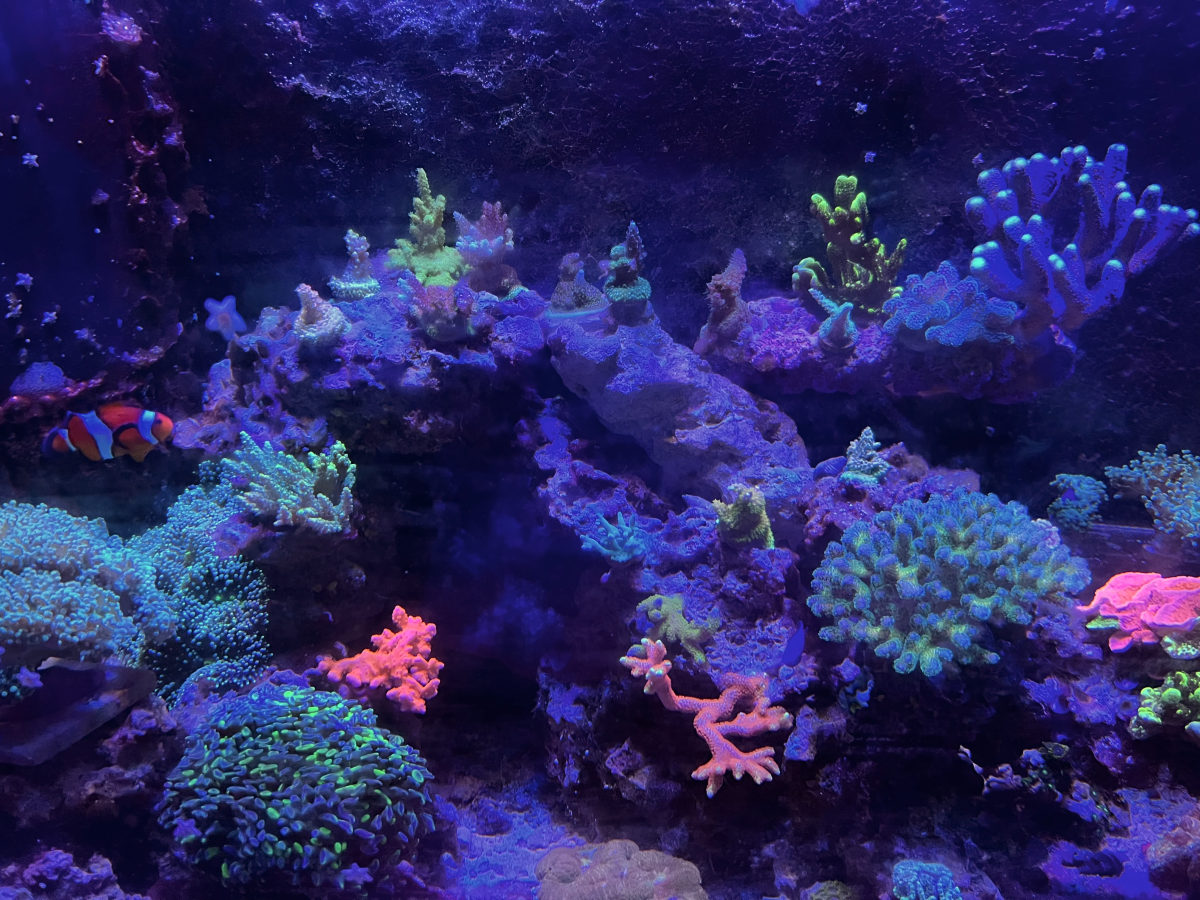 Rating - 0%
0   0   0
My new idea for the clam tank is to fill it with a bunch of shallow water acro light hogs and blast them along with the clams.
Some of the species that come to mind that I’ve always wanted to fill a tank with:
A. digitifera
A. Humulis
A. Spathulata
A. Millepora
A. Gemmifera
A. Abrotanoides
A. Robusta
And more!

BranchingHammer said:
And an almost full tank actinic shot that I just snapped for fun a few days ago. Lots of growth growing on, especially in the tabling acros! I'm going to have to start pruning/relocating in a few months to keep them from stinging each other.

Thank you! Honestly, it's taken a long time to get here, but I feel like I found a methodology that works for me now, and I'm going to stick with it for as long as I can and see where it takes me!
S

Thanks, I try to prioritze coral health over nuking the tank just to get rid of algae. A little algae is natural in every reef system, and it slowly goes away if you're patient.

PraziPro on DT with Maxima and urchin