Can I remove rock without causing too much issue?

So I have had my tank set up for about 8 weeks, I used live rock and media from someone who broke down their tank and added in a large piece of eco reef.
I removed one of the live rock a few days in to setting up as it was covered in aiptasia. The other rock is still in my tank but I’m thinking of removing it as it’s too high in the tank for me to put coral on I think and I have also noticed a few small aiptasia which I am guessing seeded from the other rock that it came with. I am however concerned about it causing issues due to removing natural filtration and also it has a lot of limpets living on it and I feel mean killing them!
Any guidance or opinions would be gratefully received ! 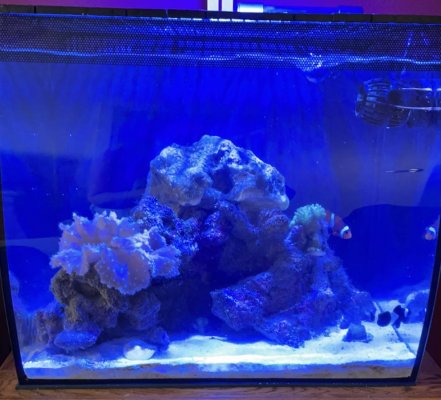 It shouldn't cause an issue. Often times an lfs or someone will take the rock from you.
S

Just a tip, most peppermint shrimp will eat aiptasia. might be a good idea to throw one in just to make sure they don't sprout up again.
OP

Thank you! That will be one of my next additions I think!

SJ701 said:
Just a tip, most peppermint shrimp will eat aiptasia. might be a good idea to throw one in just to make sure they don't sprout up again.
Click to expand...

Do not remove all the rock without replacing it and letting the new rock seed for a week or two (unless you add already wet live rock). You will remove the majority of the bacteria as most is found in live rock.

If you want to replace all at once, cure some rock first or get live wet rock from someone you trust without pests. Just a word of experience. Pests come no matter what. Management becomes a very real thing.

H
It just gets better and better...

V
Newbie is this a coral or just putty?
2