This thread will document what I hope will be an awesome grow out of SPS frags in my AIO tank. This initial post is just to get the thread started and force my hand in actually beginning some legit documentation, which I've been meaning to do for some time.

I suppose it makes sense to start off with some basic specs:

Not sure if I've actually figured out how to start a true tank build thread here, but if so, then next post will list corals and hopefully have some pics, too!
Last edited: Jul 25, 2022 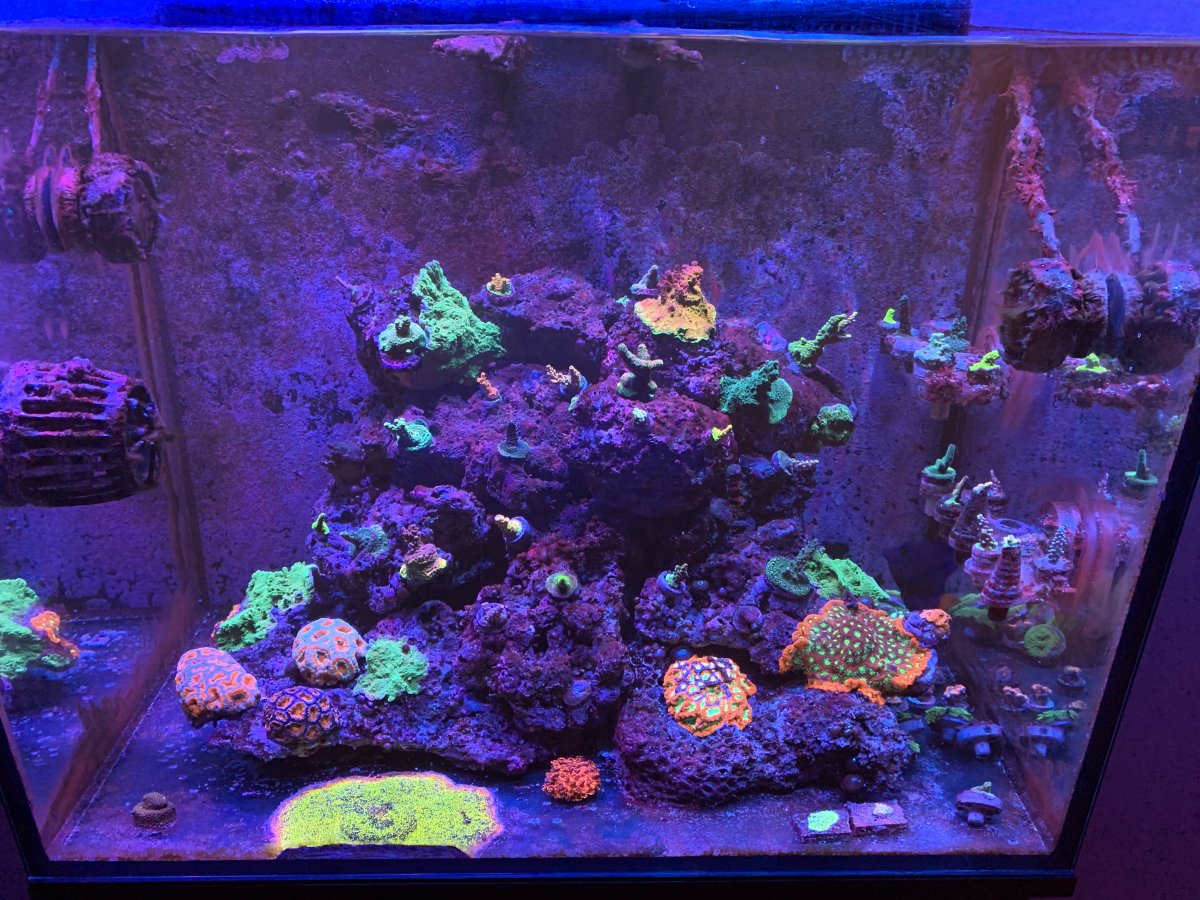 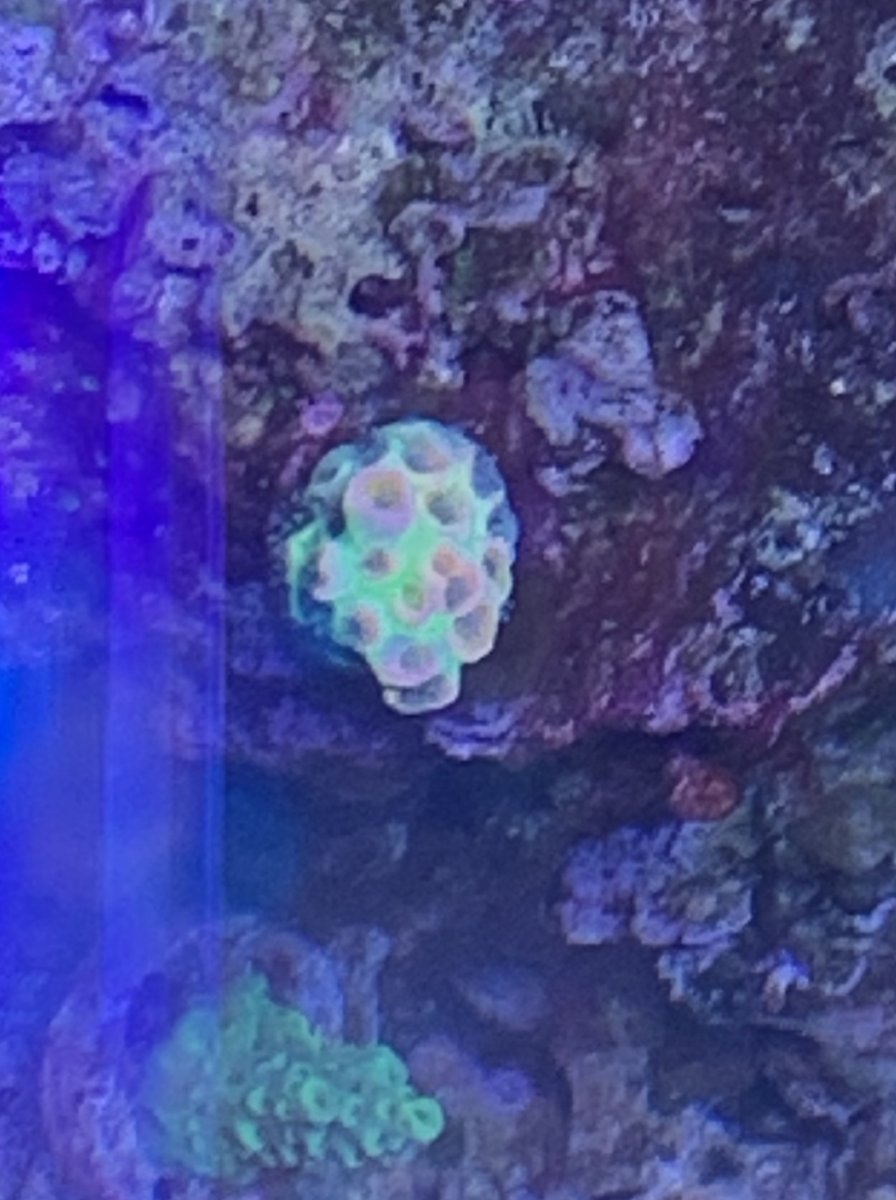 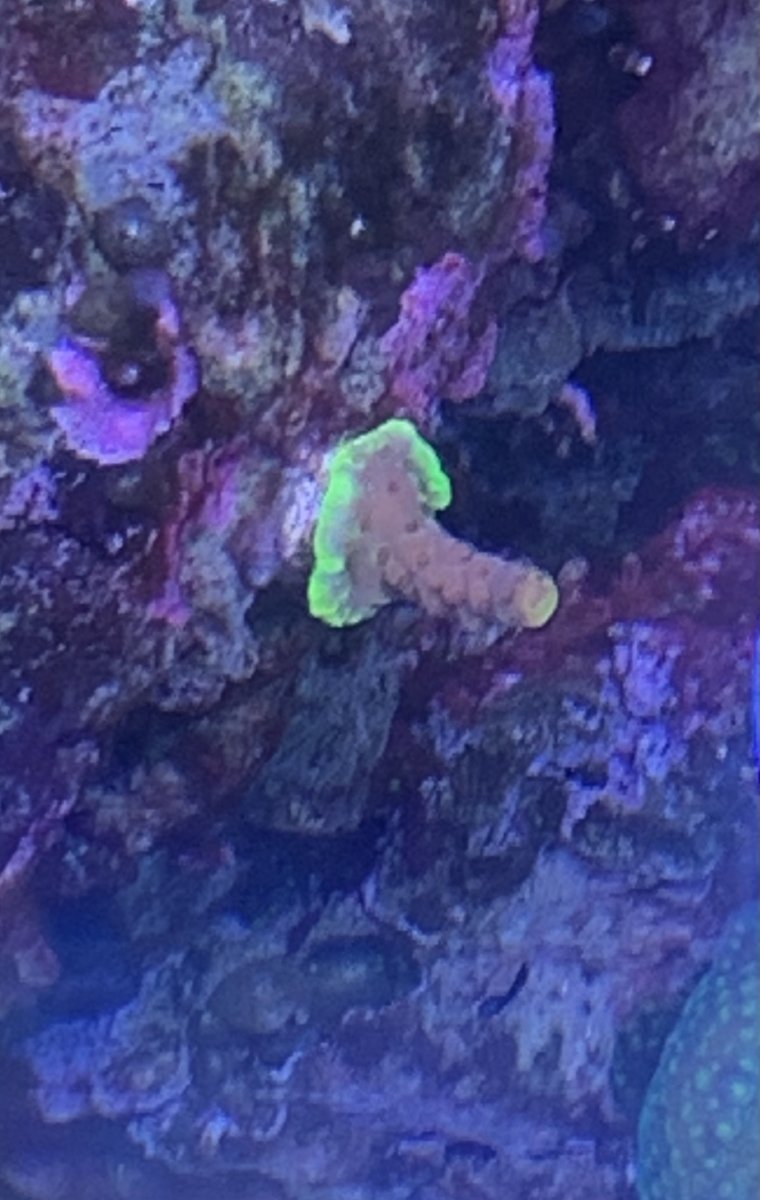 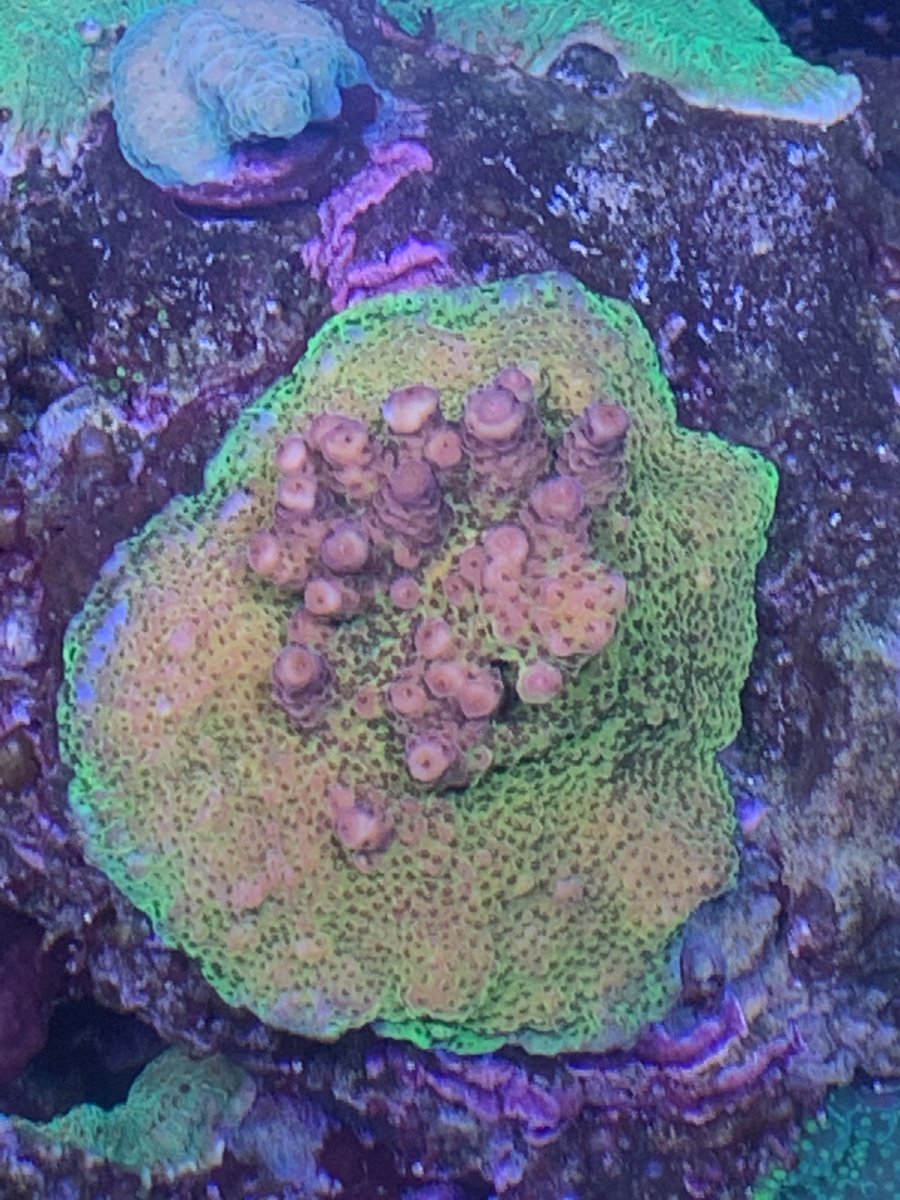 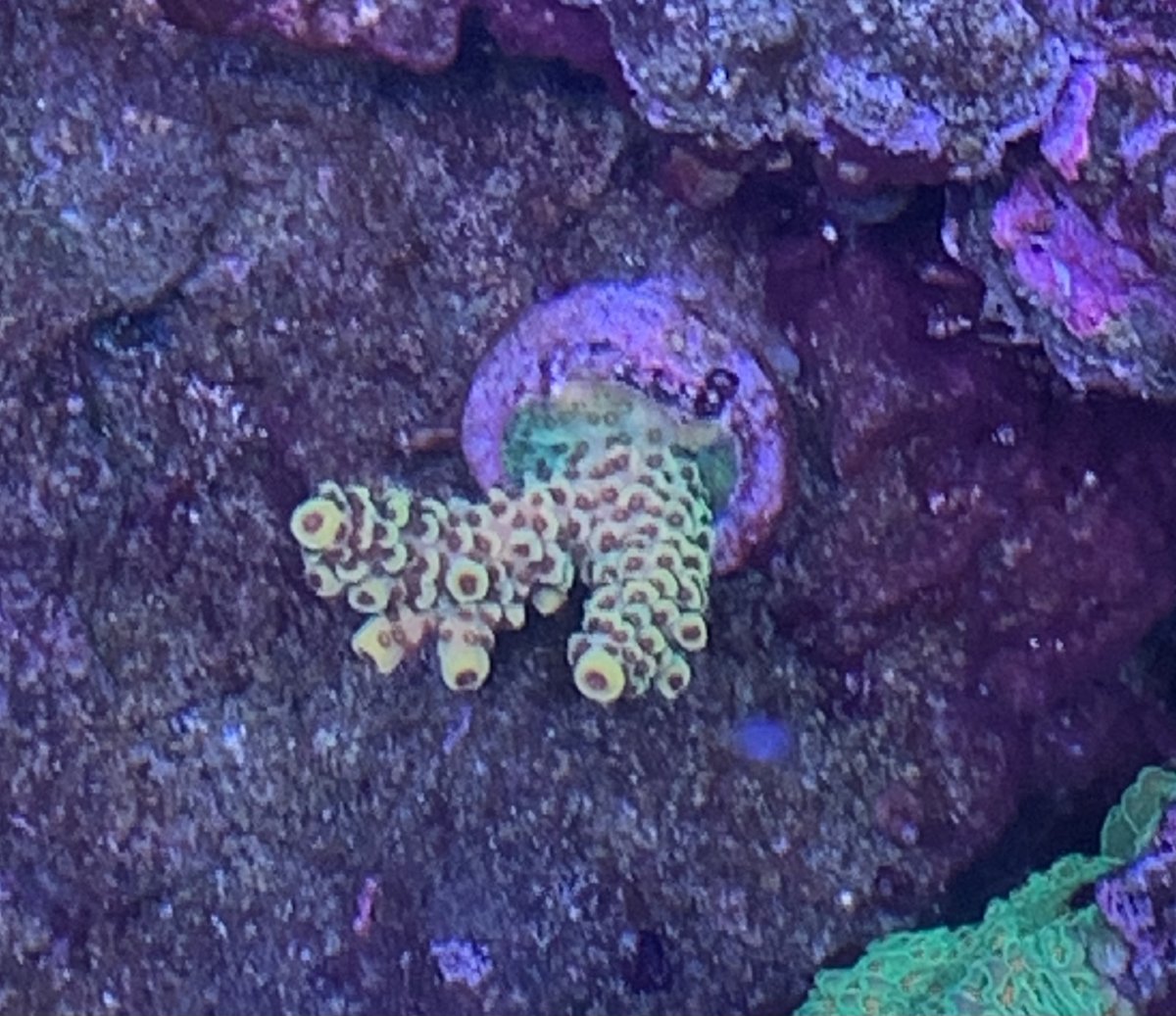 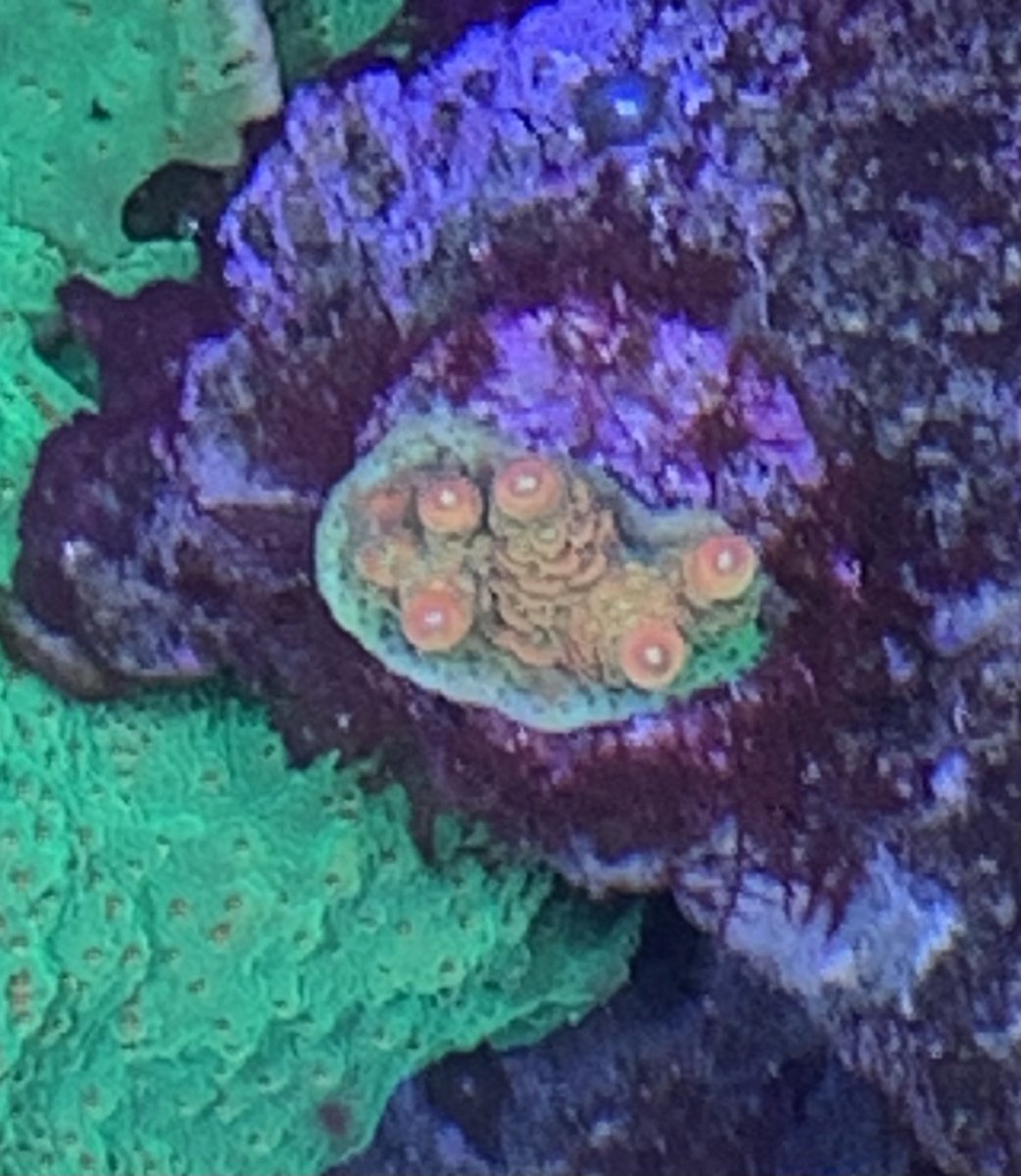 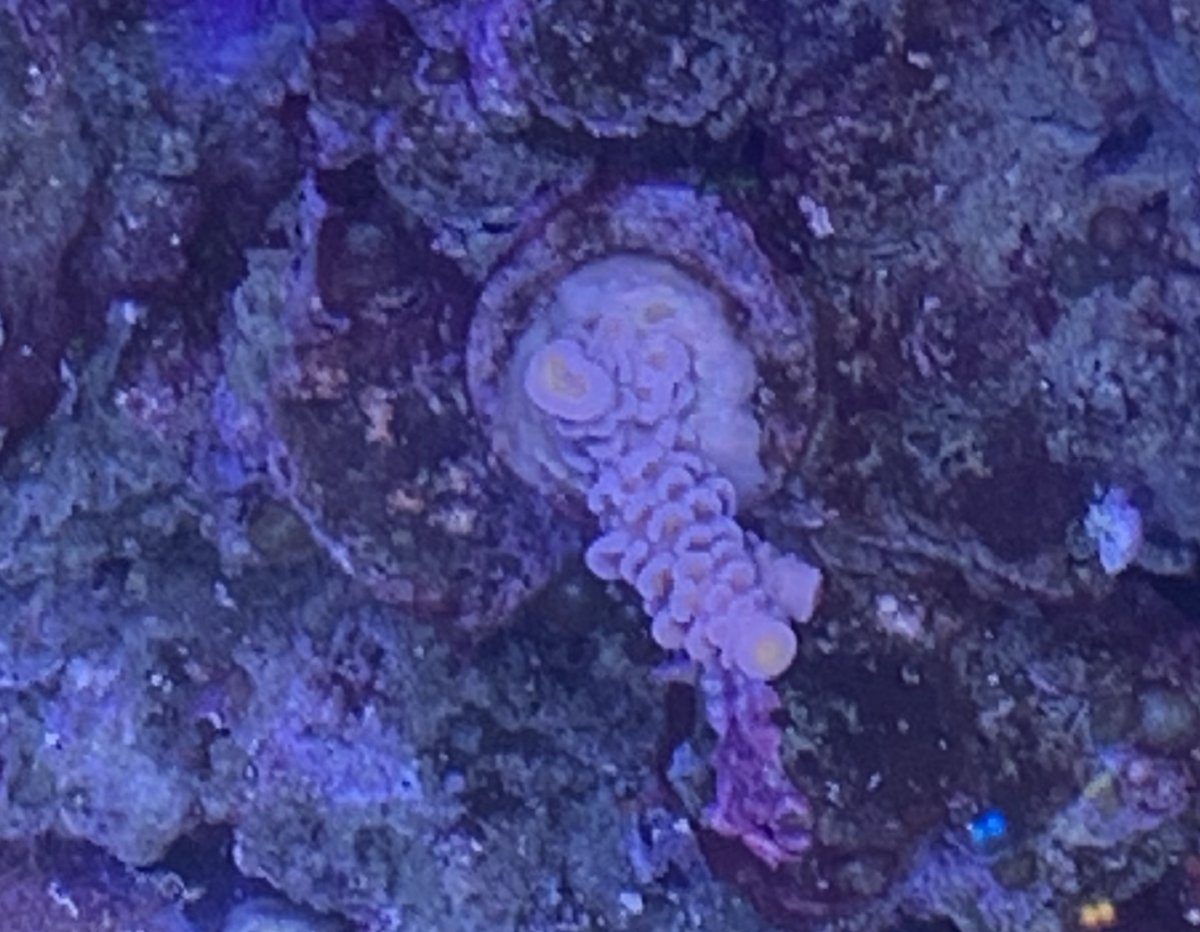 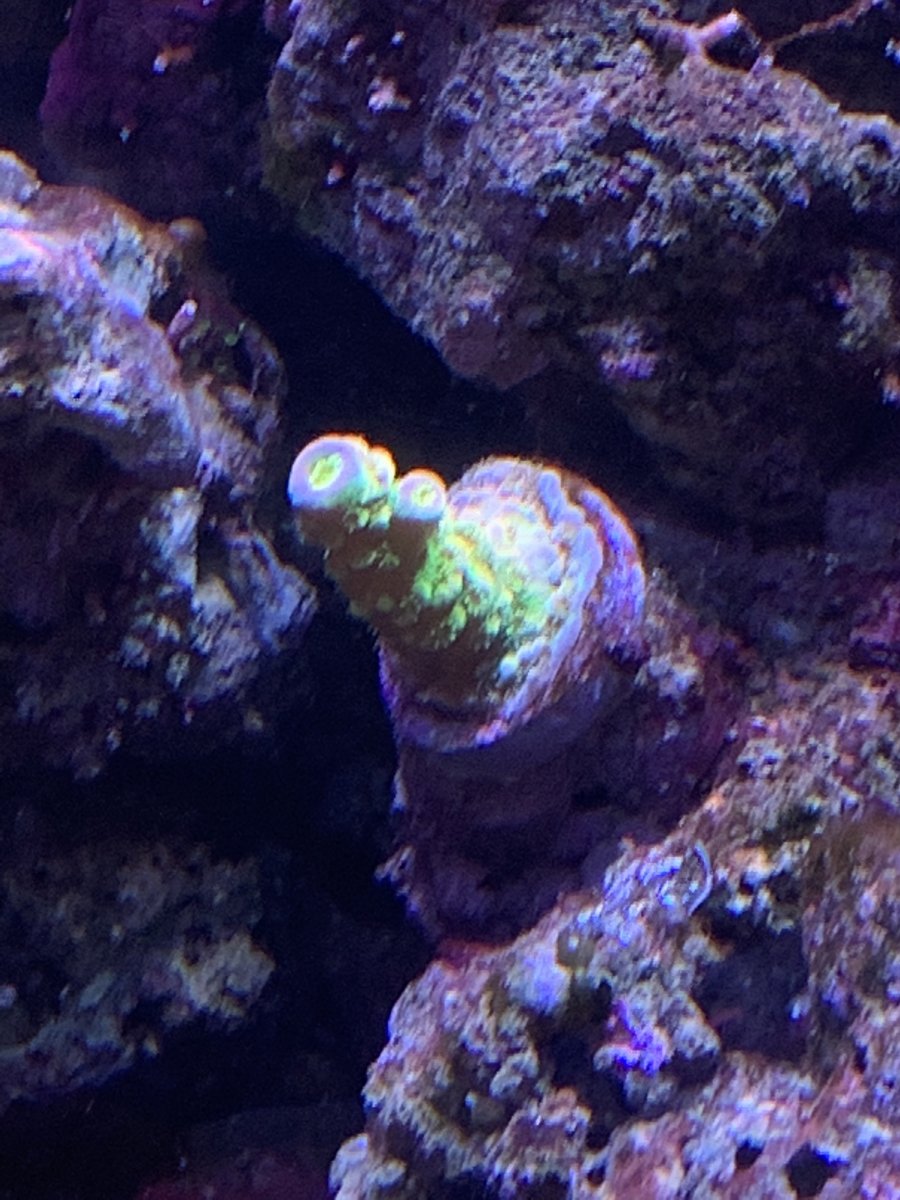 This tank has been running in some form since Fall 2001. The current tank is only the second in that time, all the rock and sand was transferred over, this was around 2016 or so. Over that entire time it has been moved around the country several times, mostly with no mortalities, but not entirely.

In the most recent move, I went bare bottom, which was just about two years ago now (Dec 2019). I've mostly had LPS and softies over the years, but recently made a move toward SPS, along with many gear upgrades.

I went a little crazy with the acro bug, especially after discovering some good auction deals on eBay. I've recently glued most of them on the rocks and am now patiently waiting for them to grow out...
OP
C 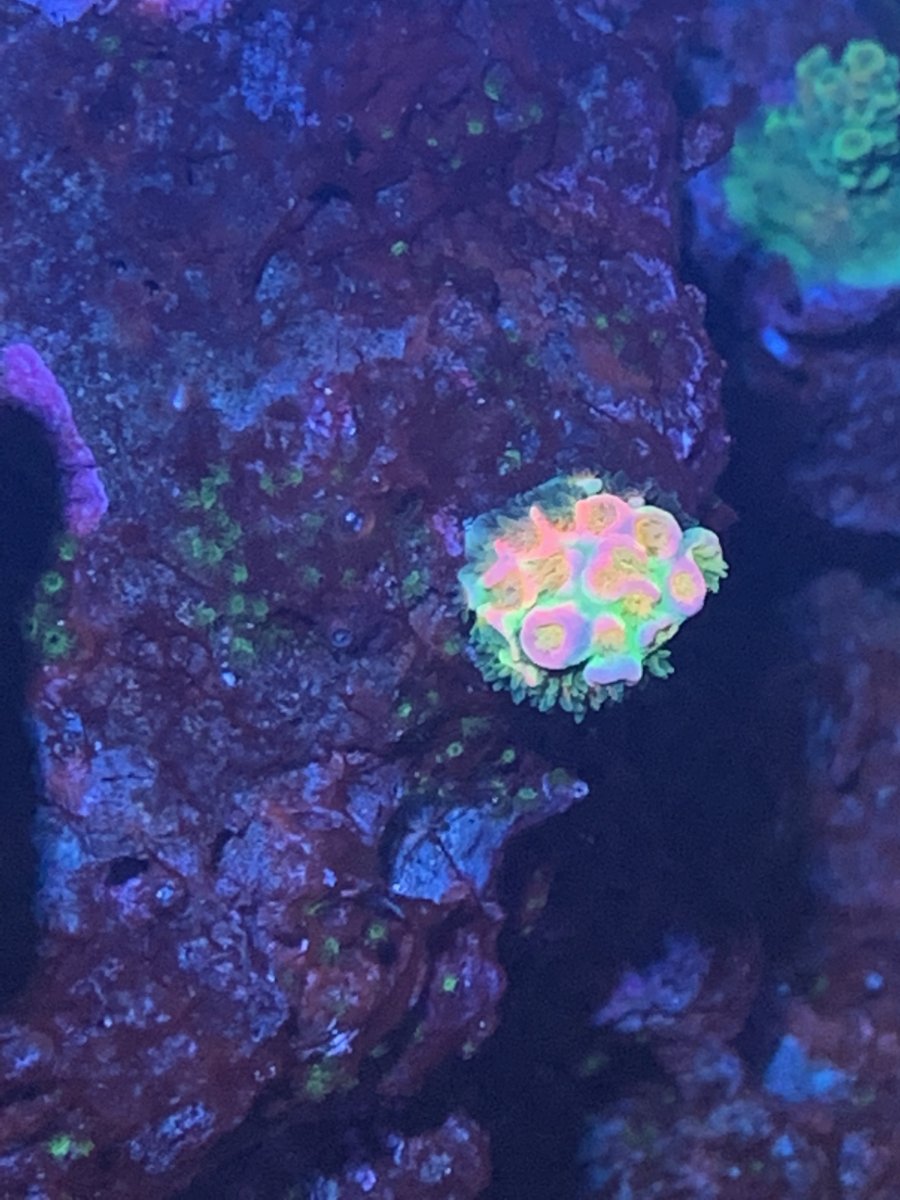 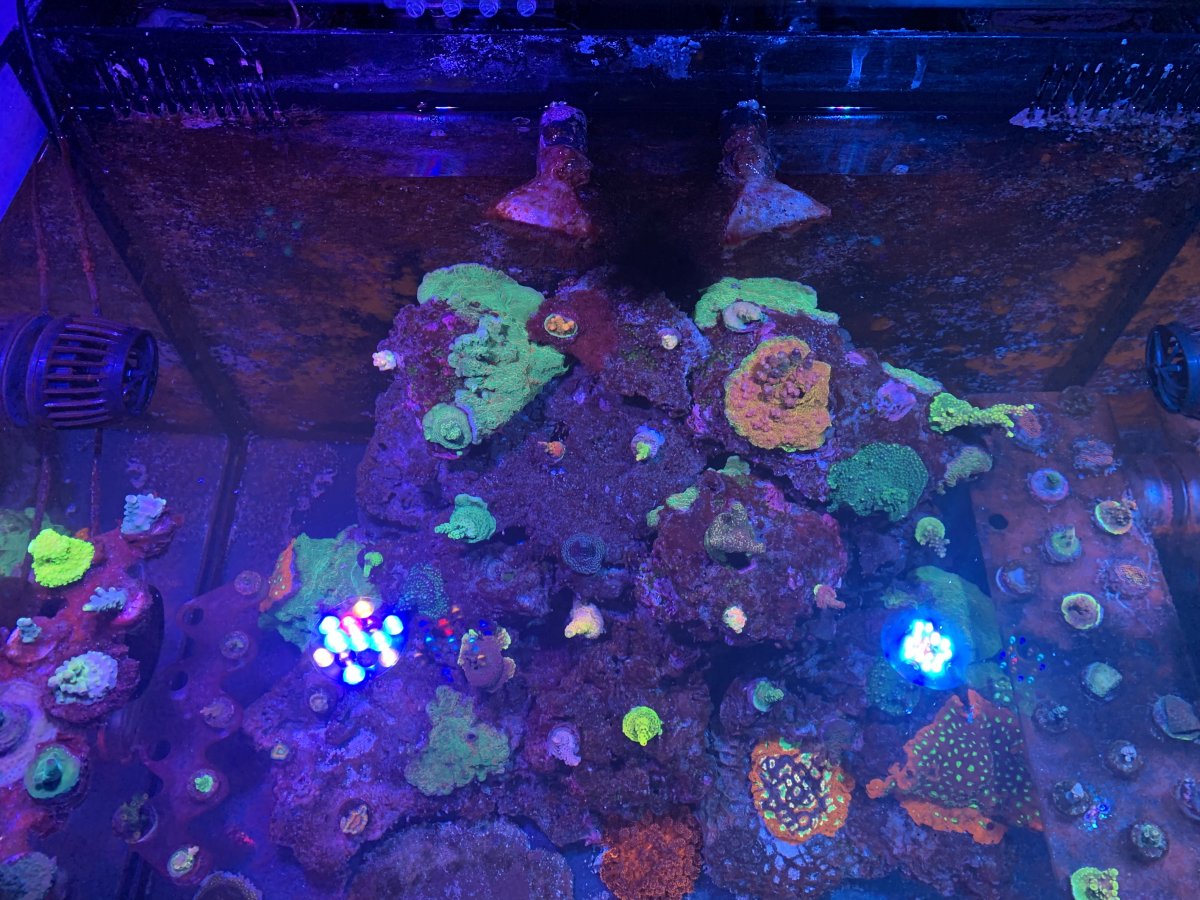 Here are some pics. Almost lights out, so very blue, orange filter on phone. Also, I'm just getting into the Reef Moonshiners program. Have picked up a few bottles, but not all of the ones I need yet. That should be interesting to document here. Fingers crossed I get the coloration everyone else seems to! 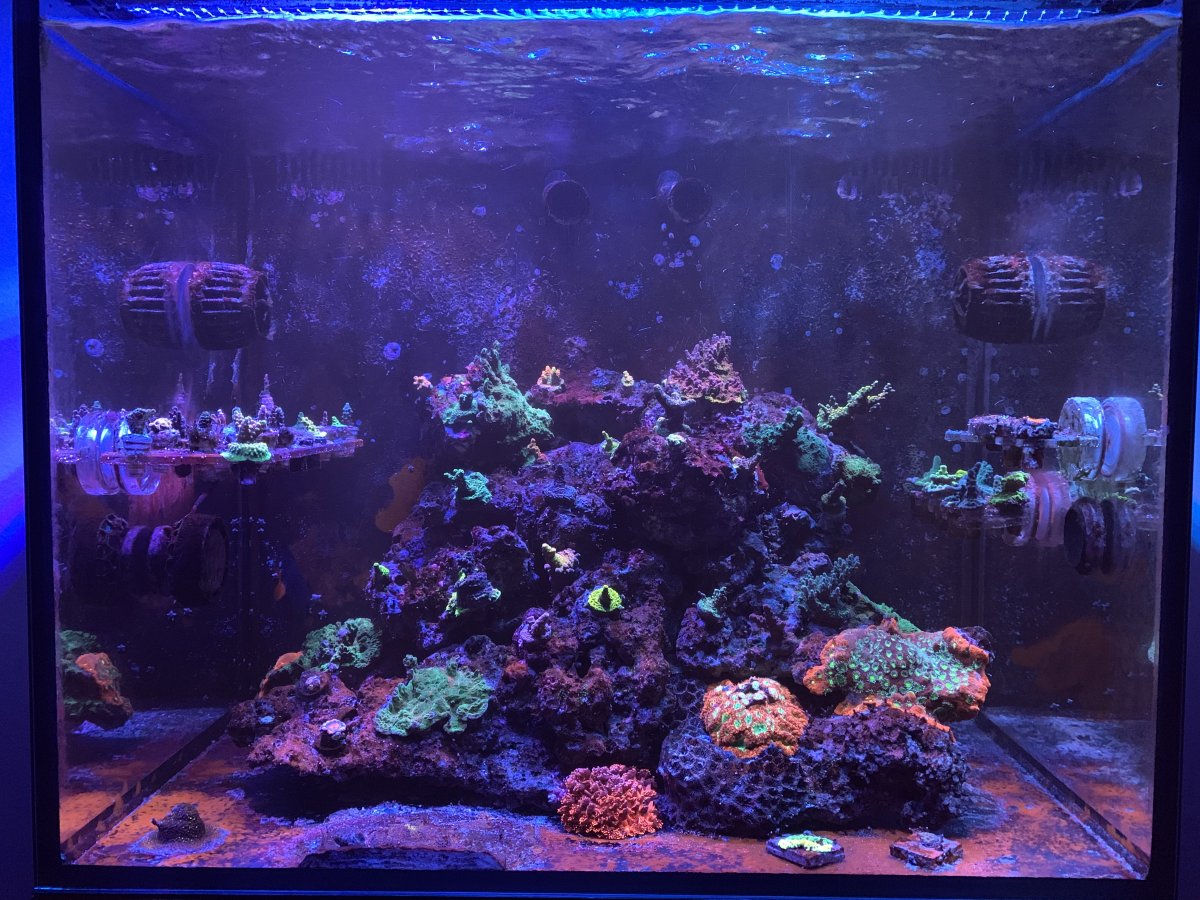 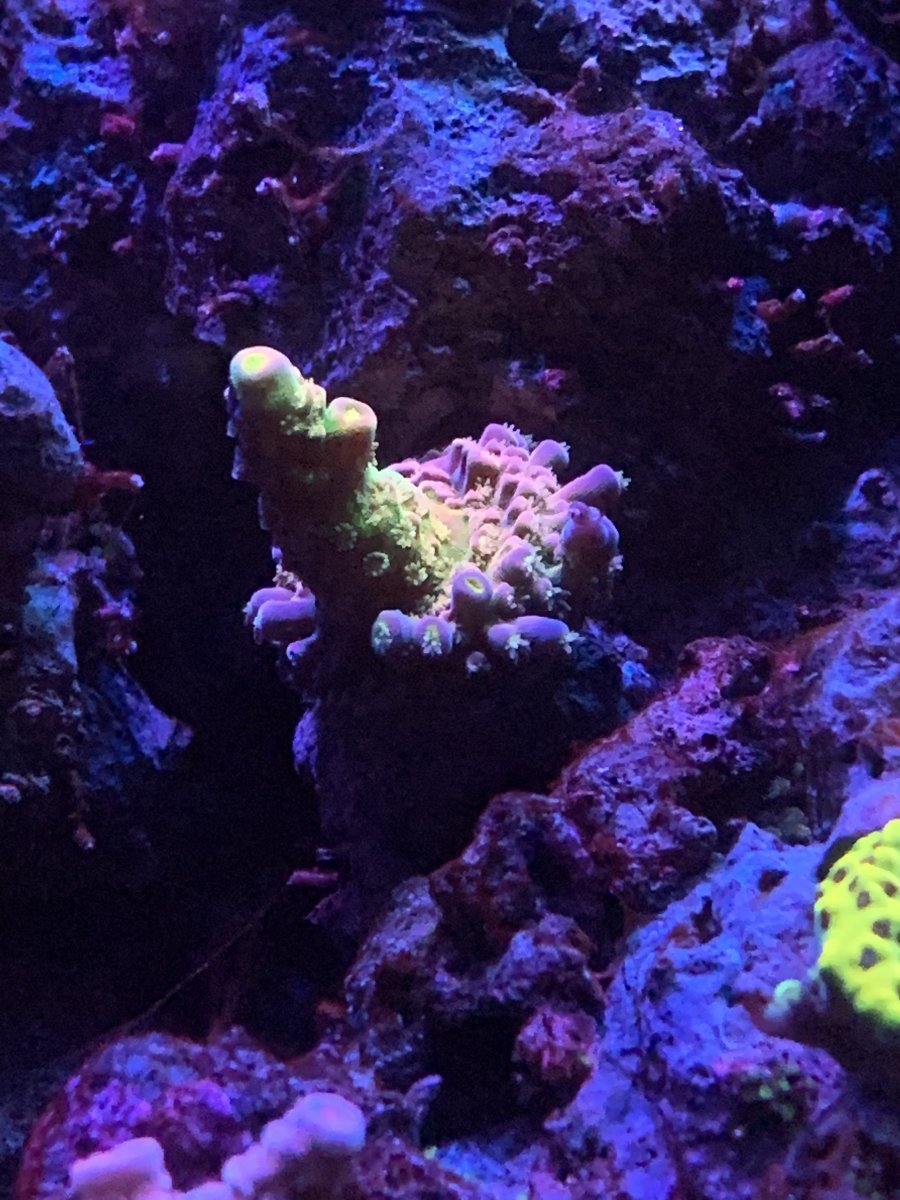 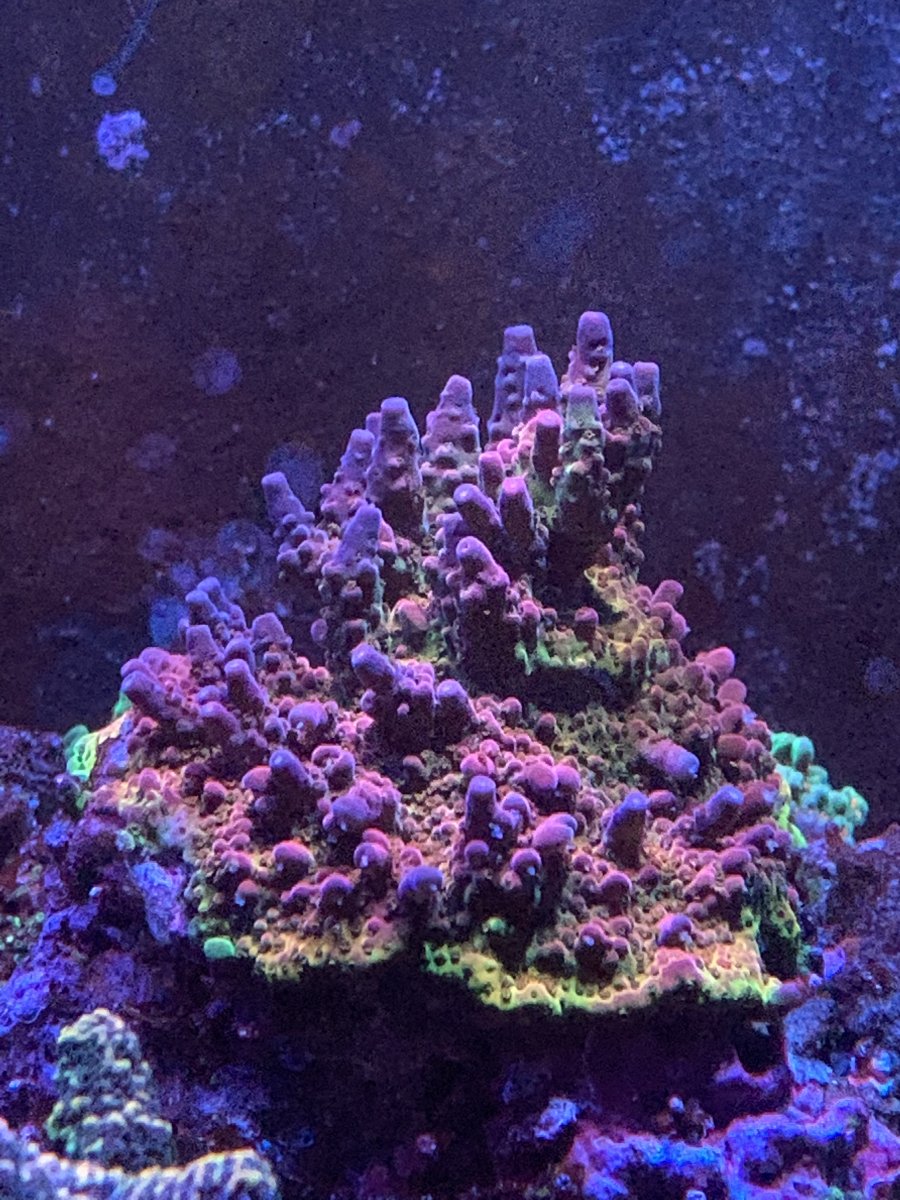 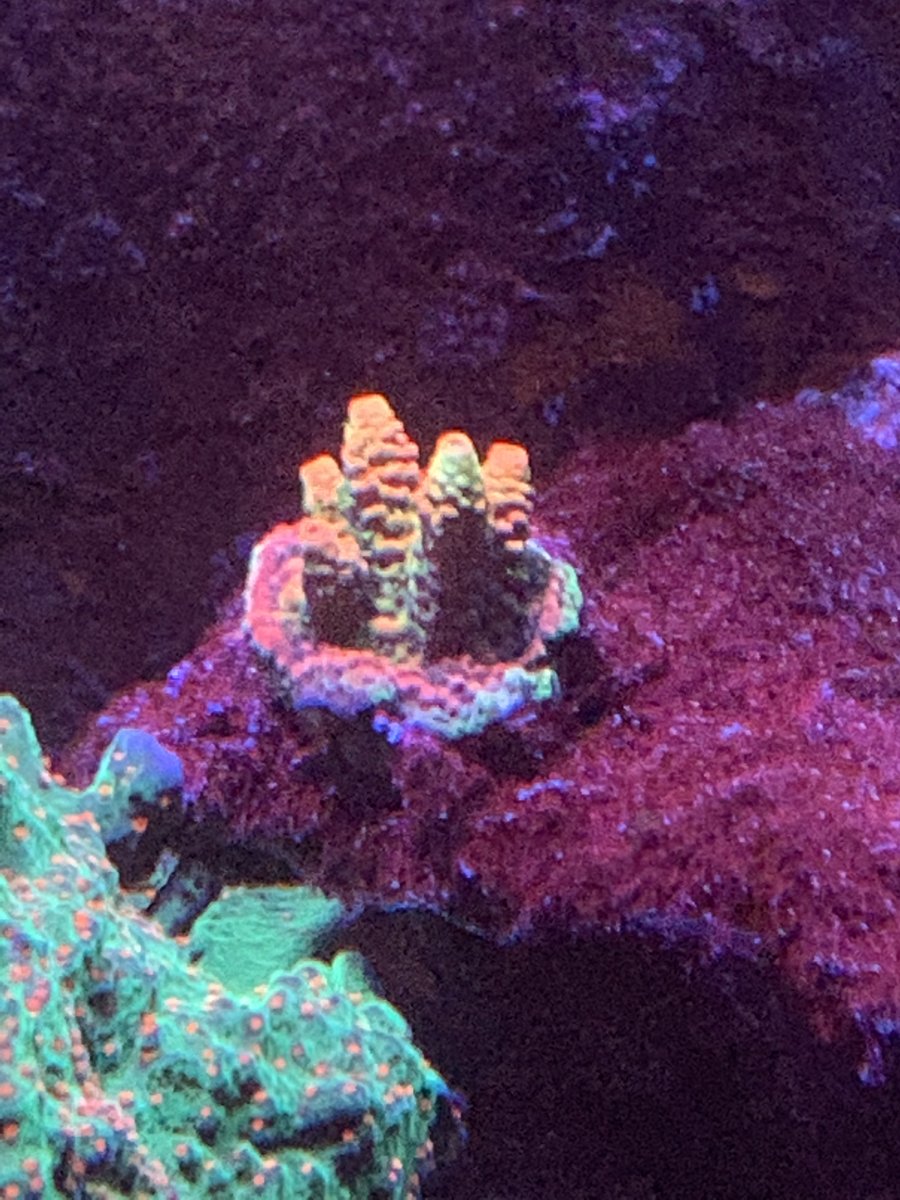 How does your Valhalla grow? Mine is fairly slowish, and the color is super picky on water parameters and really hates ALK swings. Mine has that same pale purple, and gets the yellow rim and tips, and occasionally I get a little of the blue here and there. Don't think I will ever buy another CB coral - vibrance and saturation are really bumped up.
OP
C

jcolliii said:
How does your Valhalla grow? Mine is fairly slowish, and the color is super picky on water parameters and really hates ALK swings. Mine has that same pale purple, and gets the yellow rim and tips, and occasionally I get a little of the blue here and there. Don't think I will ever buy another CB coral - vibrance and saturation are really bumped up.
Click to expand...

Yeah mine is still a lil guy right now. It's finally encrusting well now, recently, but it took quite a while for that. It was such a tiny nub when I first got it. Good PE, mostly that purple color still with the brighter growth edge. That's about all i can say right now, but I'm hopeful it'll color up nicely once it grows out. I guess that's the tradeoff with buying small, relatively cheap frags on eBay....

Just did my first official full correction dose of the Reef Moonshiners method. I started halfway a month ago, all in now. Hoping to straighten out the chemistry and optimize the acro colors.

In particular, I'm keeping an eye on this frag of TGC Cherry Bomb. I received it from a local reefer along with several other sps, almost all of which were pretty pale (I suspect too much lighting). Some have colored up in my tank, some not yet. This is one I'm hoping will color up now. I *think* I might be seeing some already...or just wishful thinking 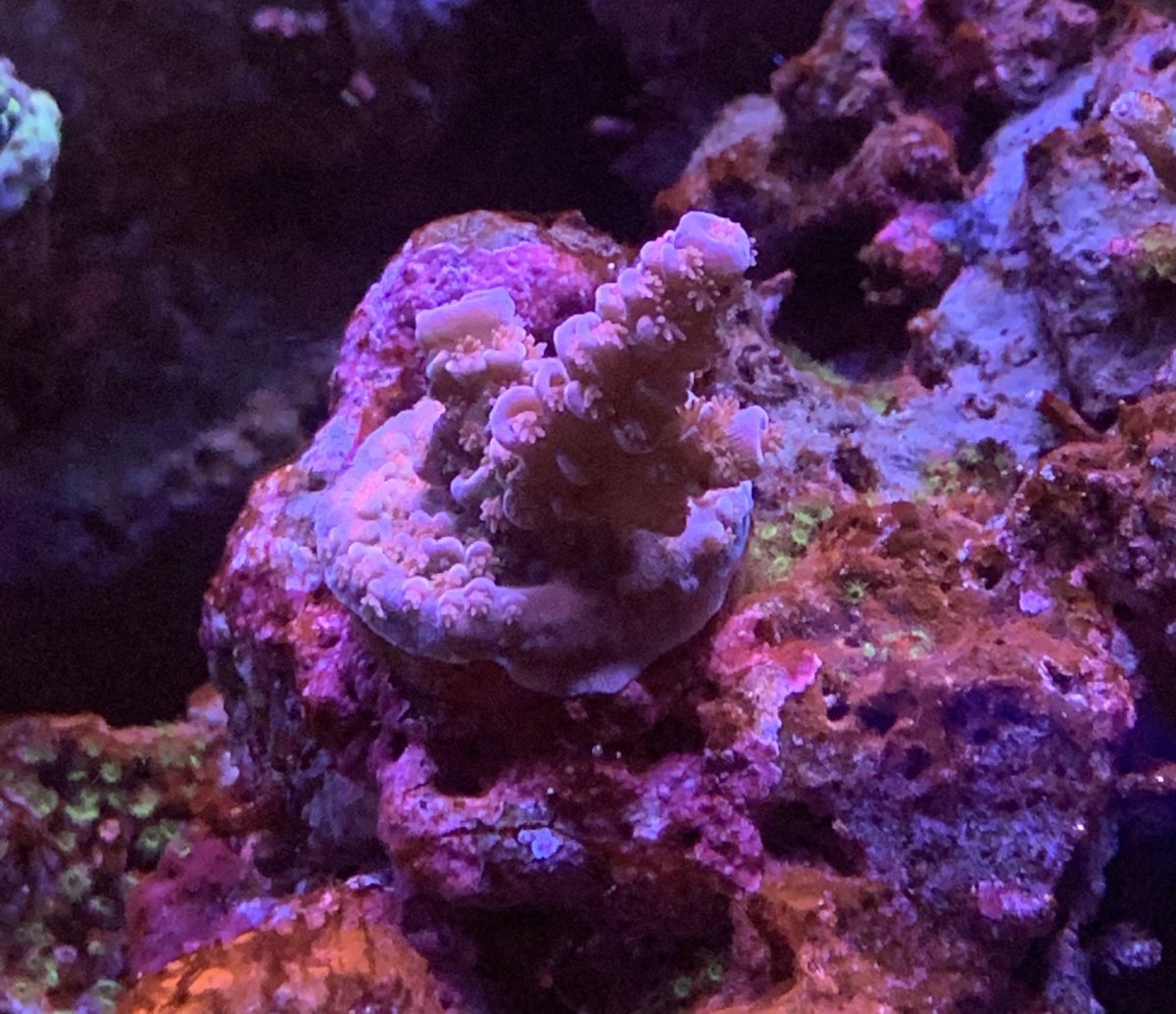 Thanks! Yeah I really like their tanks, too.
OP
C

Some quick update pics I meant to post recently, all daylight pics from 1/29/22:
ASD Rainbow Milli 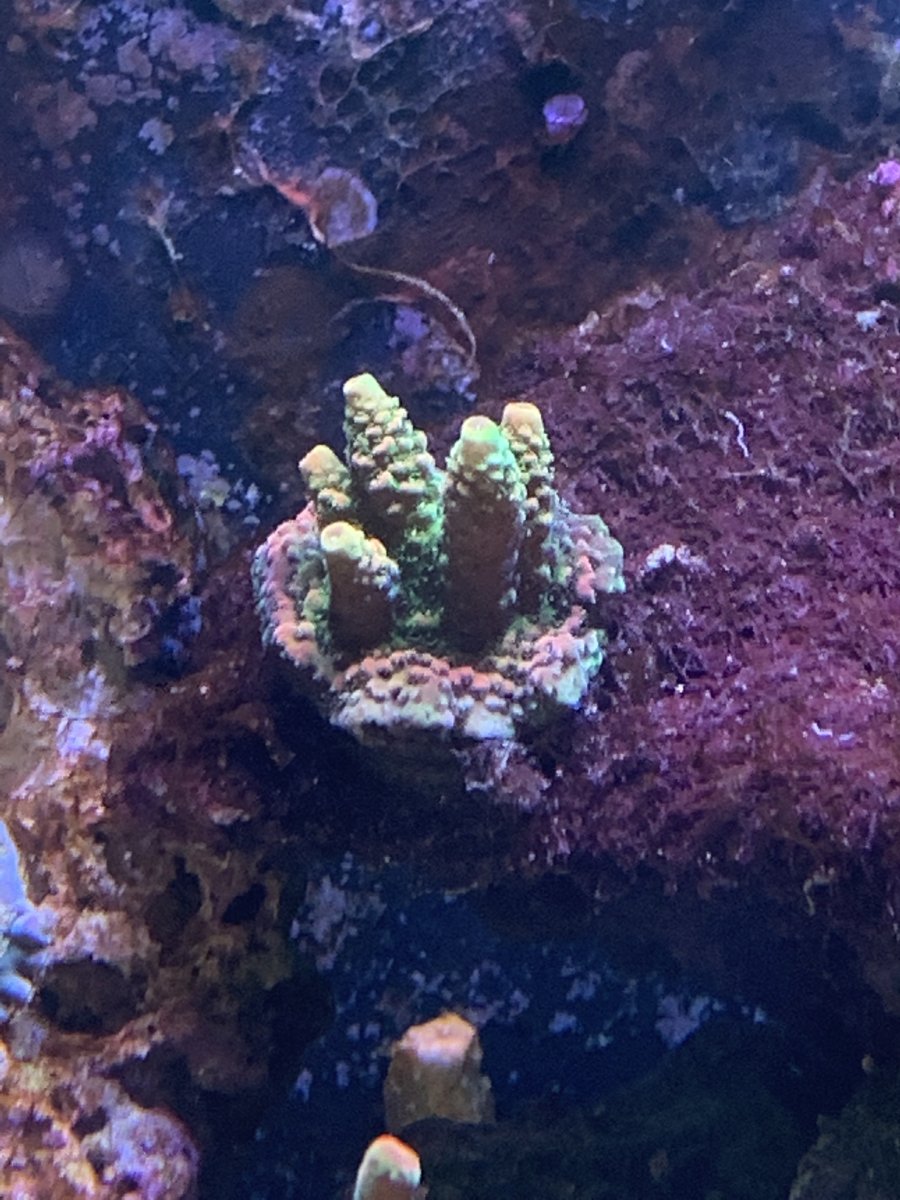 Sapphire milli (w/ other goodies behind it) 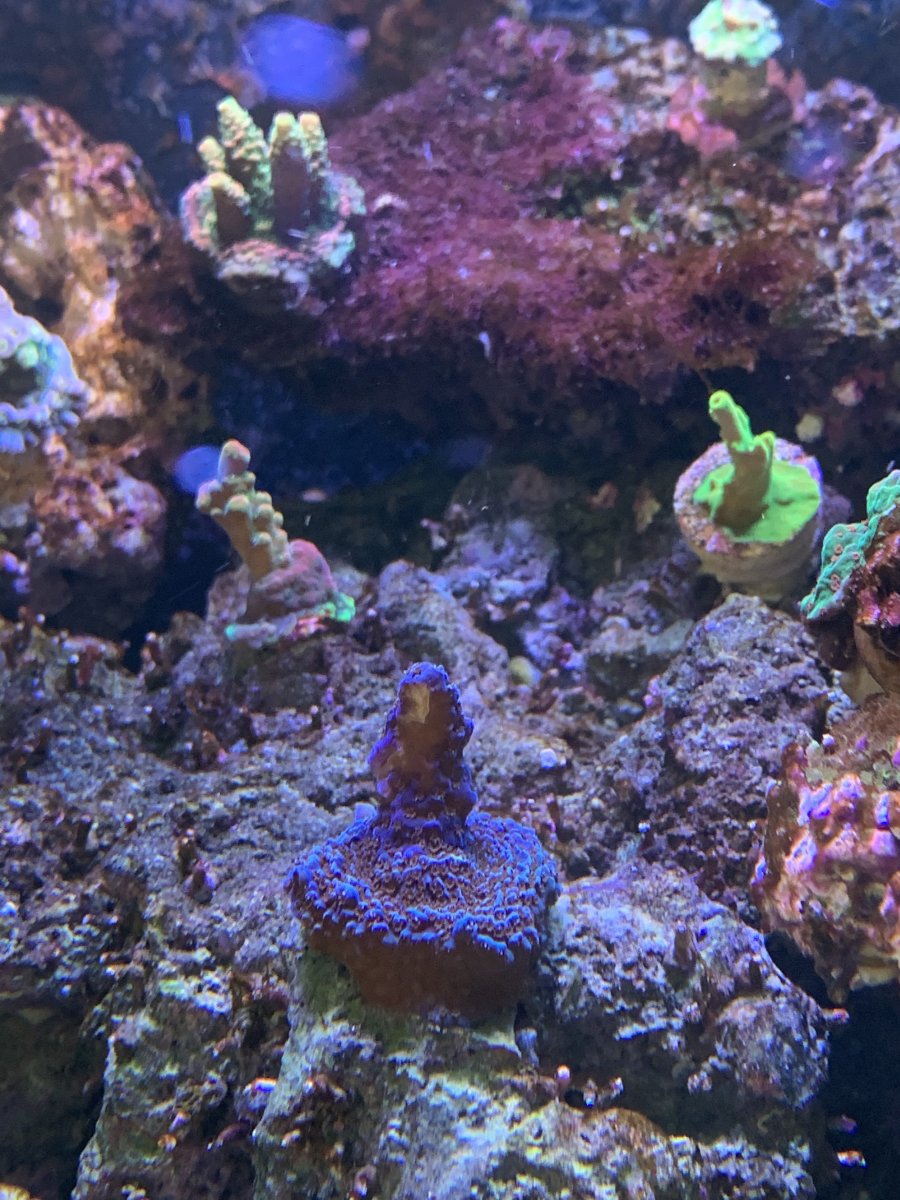 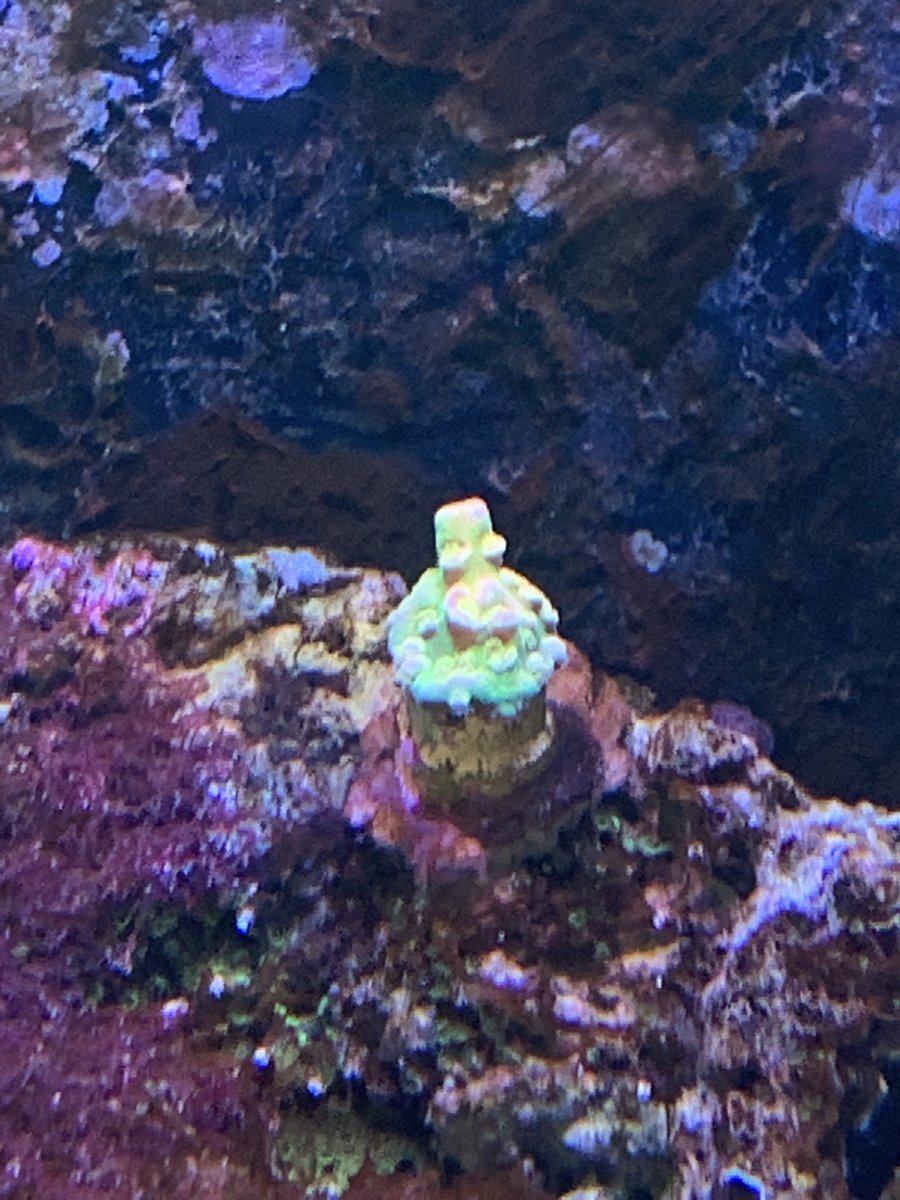 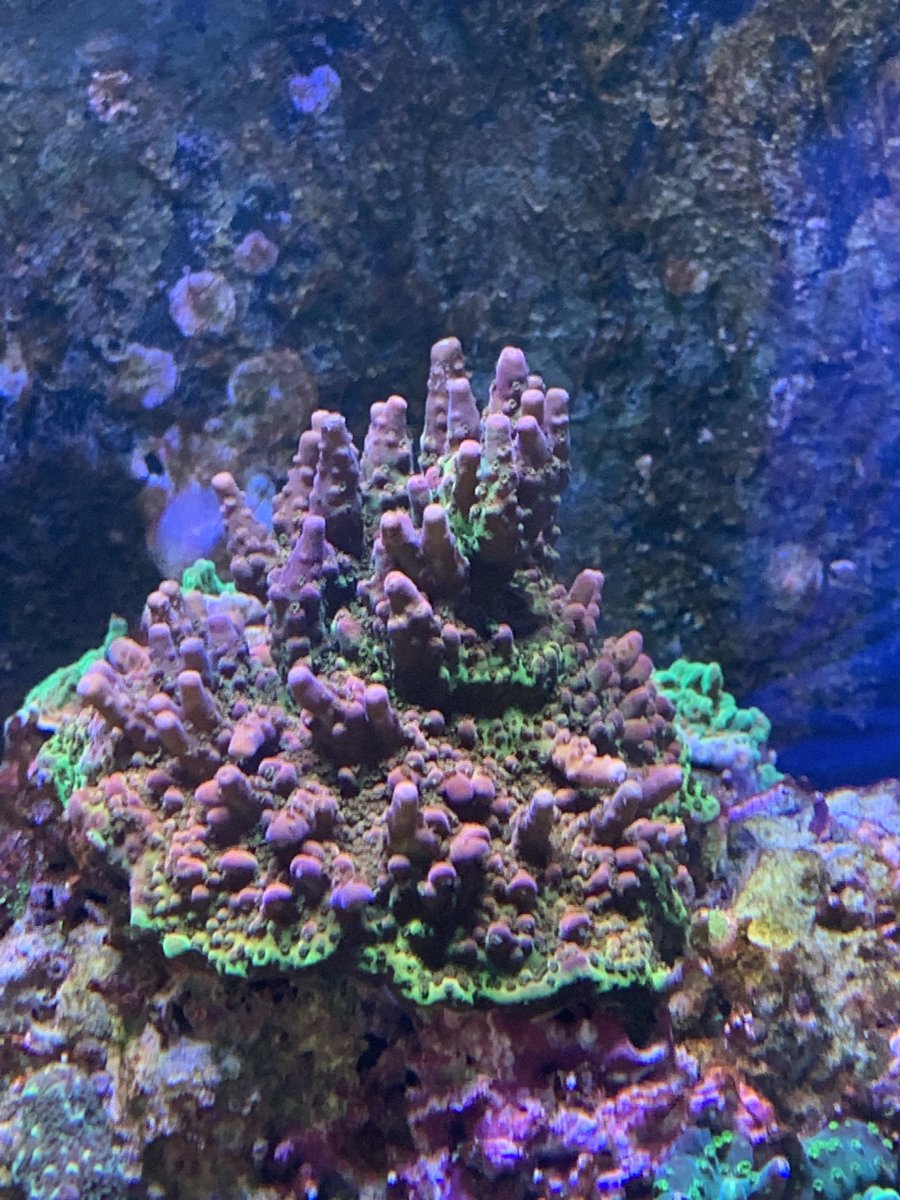 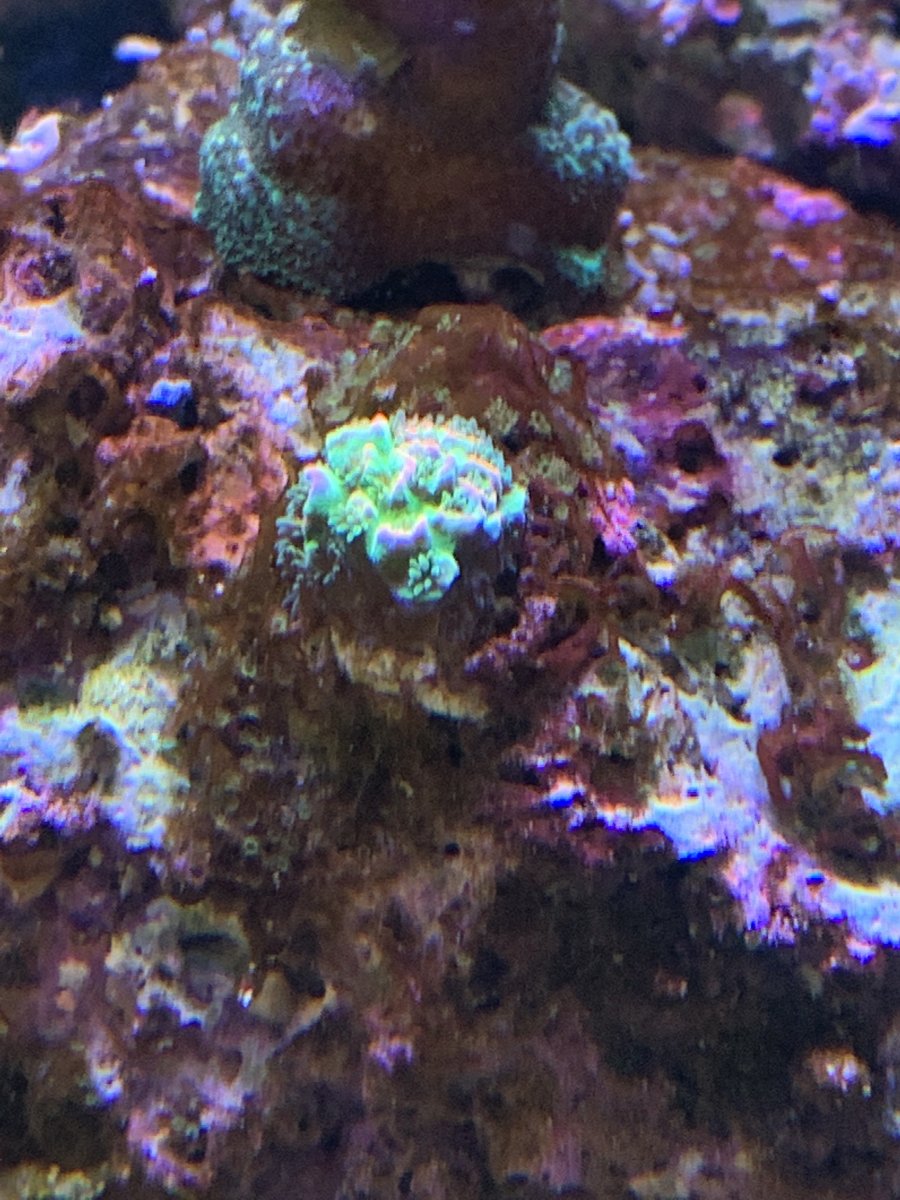 Some recent shots of some CB Watermelon Splash Millis. 2/20: 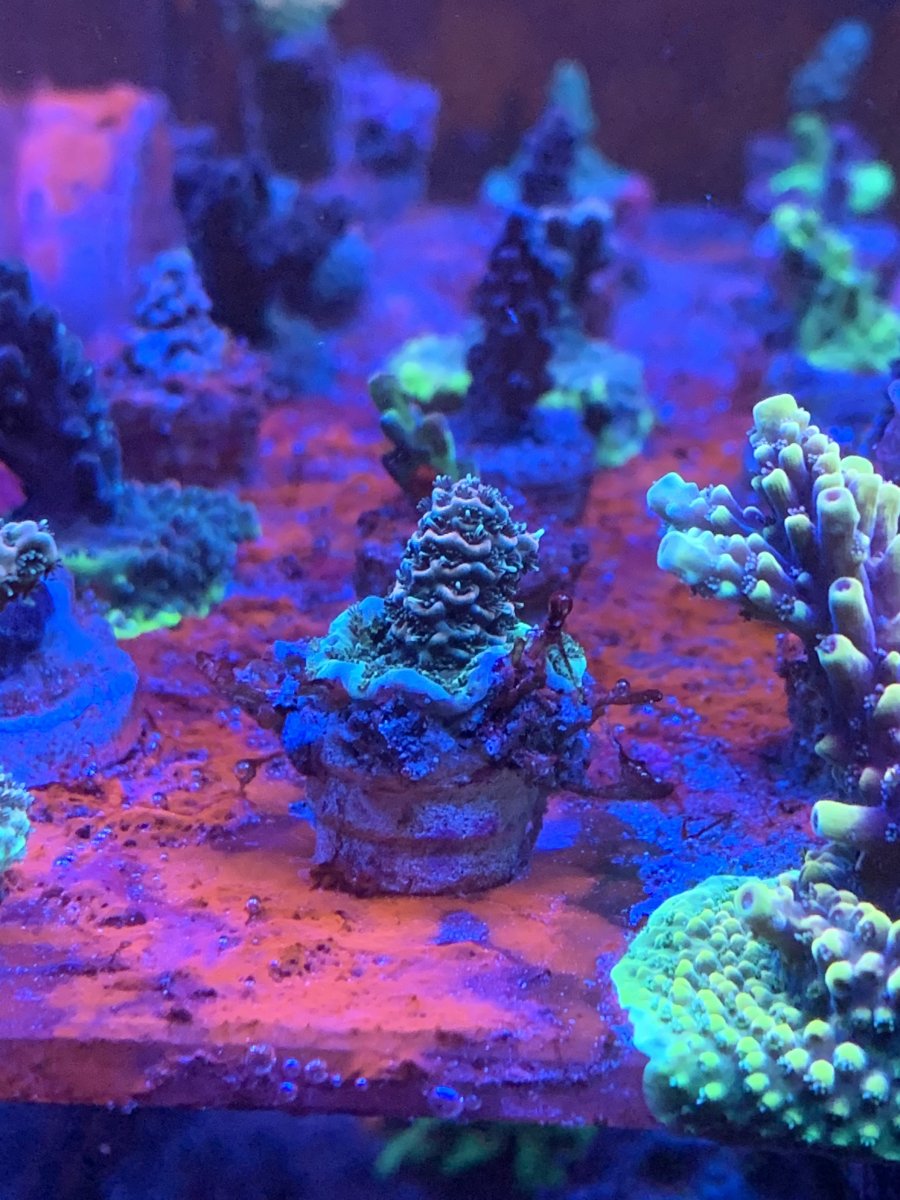 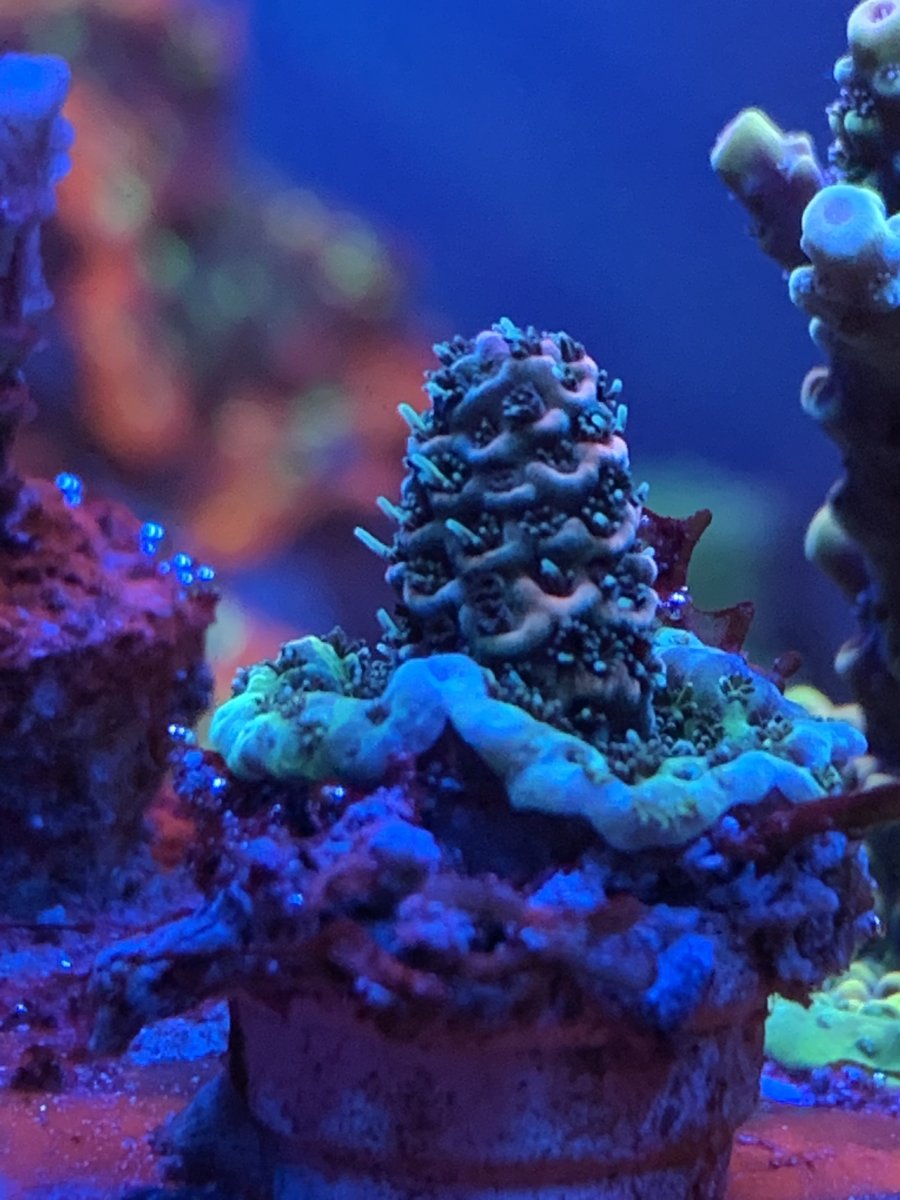 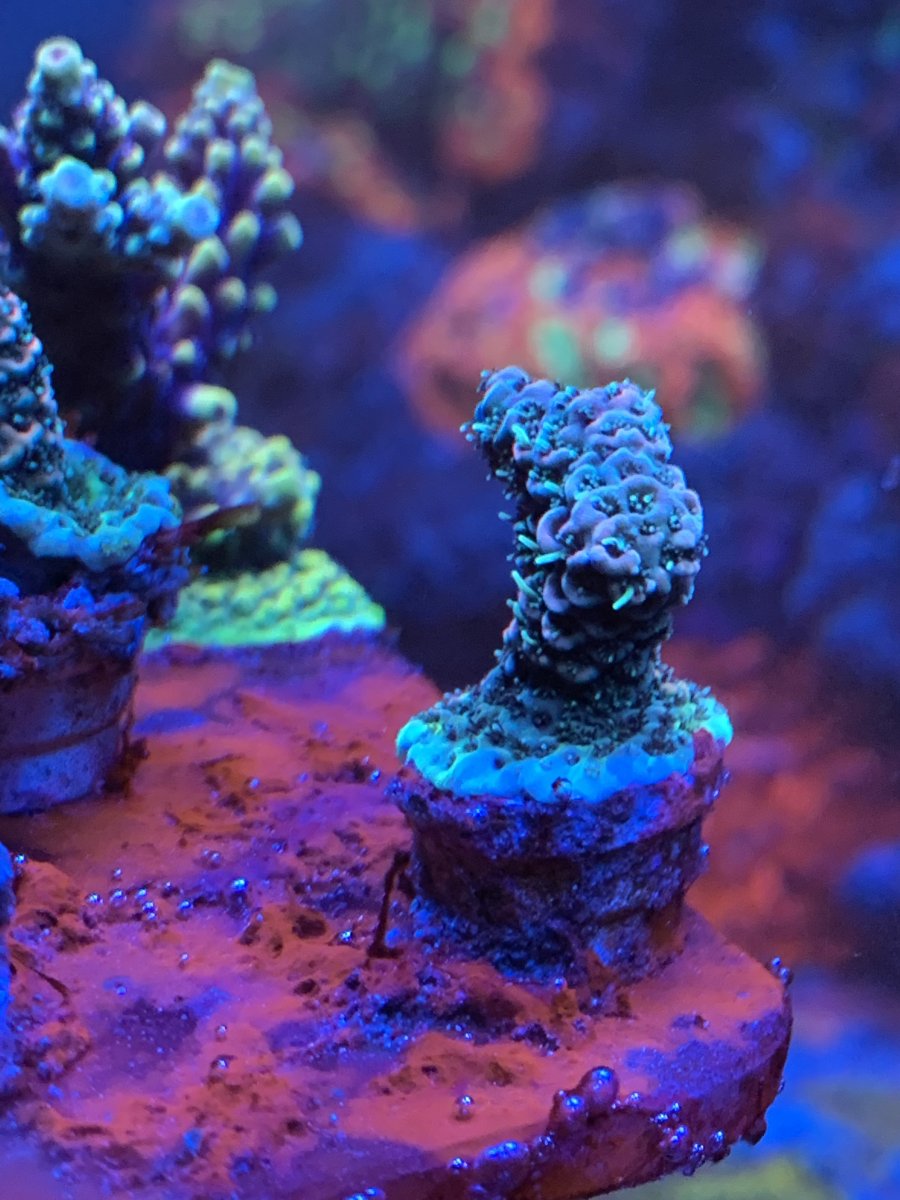 Beautiful tank! You don't have any fish?

Poseidon03 said:
Beautiful tank! You don't have any fish?
Click to expand...

Thank you!
I have two fish who hide for pictures. A flame angel and a purple tang, the latter of which will have to be re-homed before too long. I try to feed them a lot to keep food and nutrients for everyone in the water and they seem happy
OP
C

Got this little guy end of Feb. Fingers crossed he grows up big and strong! 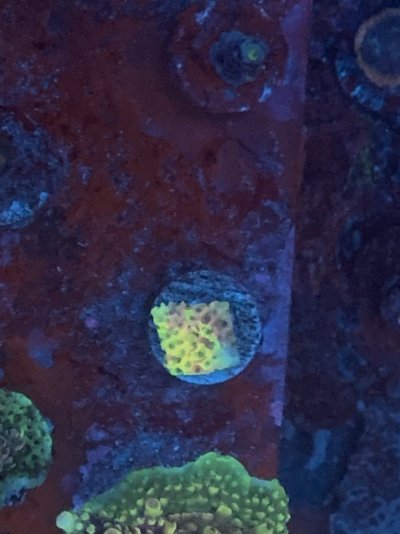