Chemical Algae inhibitors: Are they a cure, or just a band-aid to cover an underlying issue?

McReeferNista said:
Not a fan of chemicals either. I have ongoing cyano, dino, turf, hairy, algae. Some at the same time. Been a year, still at it. Chemiclean helped to get the cyano under control as it was bad #$% and my bac could meet up with its BAC. I have jumped on the bacteria wagon over a year ago, it's difficult, and all tank are not the same. I sit on the side lines here, read what reefers are offering for help and so forth. I wont give up. I love the hobby even though I do pay attention to it more if it goes sideways. like now. Here are a few pics during the end (never the end really) when i succumbed to chemiclean. Then water changes. I have just done another W/C and will take photos again. I thing the cyano wants to keep coming, but I do small changes as this is hard on all the ocean life I do still have in my tanks. I have three tanks. 47 g , 20 g and 10 g the quarantine tank., Good luck. You happened to strike me for some reason.
Click to expand...

Sorry to hear yours and everyone's problems....I know the feeling. (Hair Algae/Cyano) Past and now present.

Fingers crossed I never get dino's. Never had it, don't want it ever from watching other people's battles.

My situation with a 110G tank is almost a year of never-ending-Cyano. As I posted above each time Cyano started getting under control I got back to using Amino's and ruined my progress on Cyano. Amino's do wonders for my SPS Colors & Growth, but they instantly bring back Cyano, and bad!!

So I have just tried Dr. Tim (Re-Fresh) followed by (Waste Away) ....still doing Waste away.
It's working, but cyano is not quite gone. Bit too early for Week 2.
I consider Healthy Bacteria Additives as a good thing compared to other additives. Fighting bad bacteria with good bacteria.

However now that the Cyano is receeding I now have a small patch of Hair Algae that I can't get rid of.
I'm terrified it will spread which can happen if during plucking the algae some get's loose and attaches to another spot. It kind of looks like Bryopsis Algae which I've personally never seen before, so I'm not sure. 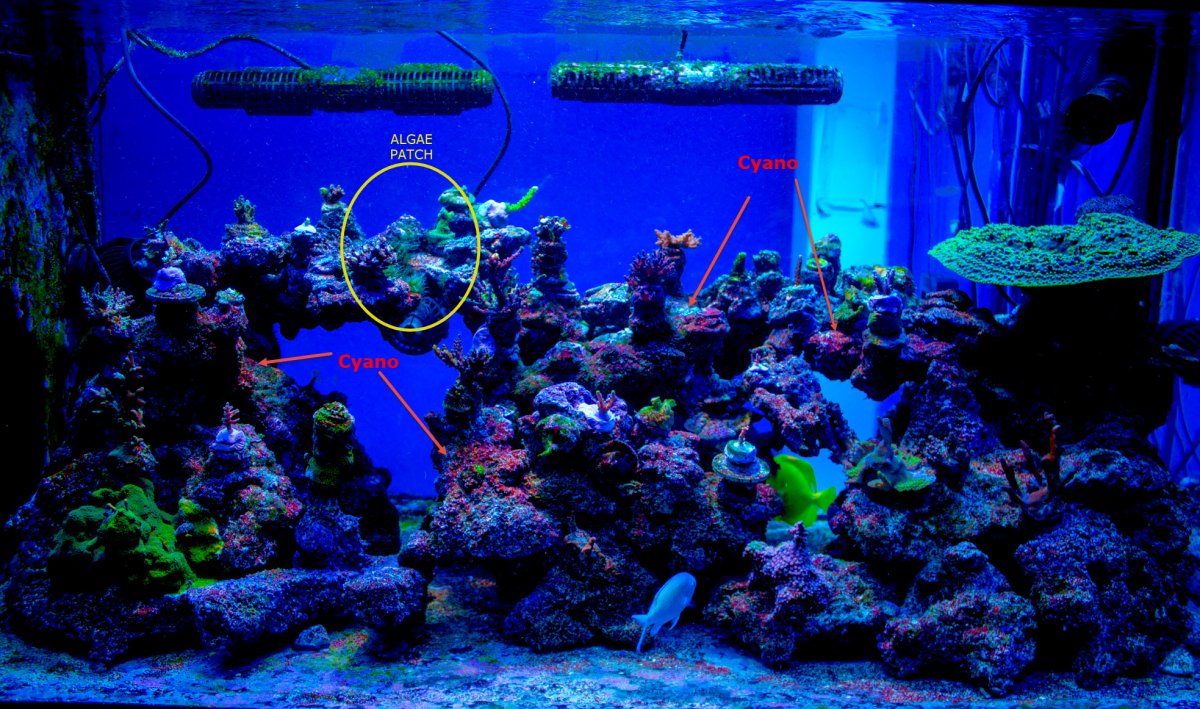 1) Got 4 small Emerald crabs a couple of weeks ago. They are doing wonders cleaning the rocks of fine algae, but so far they haven't touched the GHA.

2) So my next plan of attack is to get a Algae Blenny. I've had one in the past and they are great, however the problem is they may end up dying if they run out of algae. The Blenny has to go into QT since I always QT my fish. I've setup QT with something special. I plucked some of GHA and Crazy glued some to a rock. It's to get the Algae Blenny trained to eat the same Algae on my rocks, while he goes thru QT. No point getting more snail, hermits. urchins since they too don't eat the GHA. I tested everything I could get my hands on from CUC. Only inverts will eat Hair Algae (Cowrie snail and Sea Hares). Sea Hares are the best but they seem to die quickly. I've had two. Never get a Tiger Cowrie, since they eat Corals...SPS and LPS (I've seen it with my Tiger Cowrie do it in front of me while a freaked....I still have the empty Cowrie Shell and a reminder.

Anyone know if that is Hair Algae, or Bryopsis?

Why try an Algae Blenny? We'll I had a Turf Algae outbreak in my other tank. They say Turf is hard to get rid out. He did a great job, then the Tangs learned to eat the Turf and they finished it off.

mdb_talon said:
Diatoms are algae. There is still debate whether dinos should be classified as algae or protazoa. In any case based off the reference to cyano in the original post/question, I think it is fair and was intended that they are included in the discussion.
Click to expand...

As cyano are bacteria how they become part of a discussion concerning algae? Probably because they are able to use light for photo-synthesis and lie at the basis of the evolution of algae and plants.
.
In the competition for nutrients cyano are able to out-compete most algae in nutrient poor conditions as they are bacteria and able to store a high phosphorus reserve.
Symbodinium in corals are photo-autotrophic dino's ( containing evolved cyano) but about half the dino population are heterotrophs and are able to compete with cyano in low phosphorus conditions. Dino's are algae able to perform bacterivory!

If chemicals are used to kill algae , what would be the active ingredient making it possible for the chemical to be reefsafe?

QUESTION OF THE DAY Aiptasia: Do you ever just leave them alone? What happens if you do?
2 3 4 5 6

QUESTION OF THE DAY What does the term "Good Water Quality" mean to you?
2 3

QUESTION OF THE DAY Canister Filters: Canister filters are a viable, inexpensive way to filter a reef tank. True or False?
7 8 9 10 11

QUESTION OF THE DAY Keep THESE TWO THINGS out of your tank for a better reef? True or False?
2 3 4 5

QUESTION OF THE DAY Who lives the closest & farthest from a saltwater fish store? What do you do if you live FAR away?
3 4 5 6 7