Ok let’s get this started. As you can see my Reef Savvy tank has arrived in its fantastic crate! My anticipation for this tank and the build I’m about to embark on has been great to say the least. After a year of planning, lots discussions with Felix at Reef Savvy, and then some hard prep work on my fish room/water station, I am really excited to start this build thread. Here are a few of the details:

· Black background (although in hindsight, I wish there were a way to do clear background to add depth to the tank but not possible with the ghost overflow)

· It will be plumbed as a bean animal overflow system

The quality of this tank is unbelievable although for now it is sitting in its crate in my garage. I still need to do a lot of prep work before I can put the tank in the main display room. 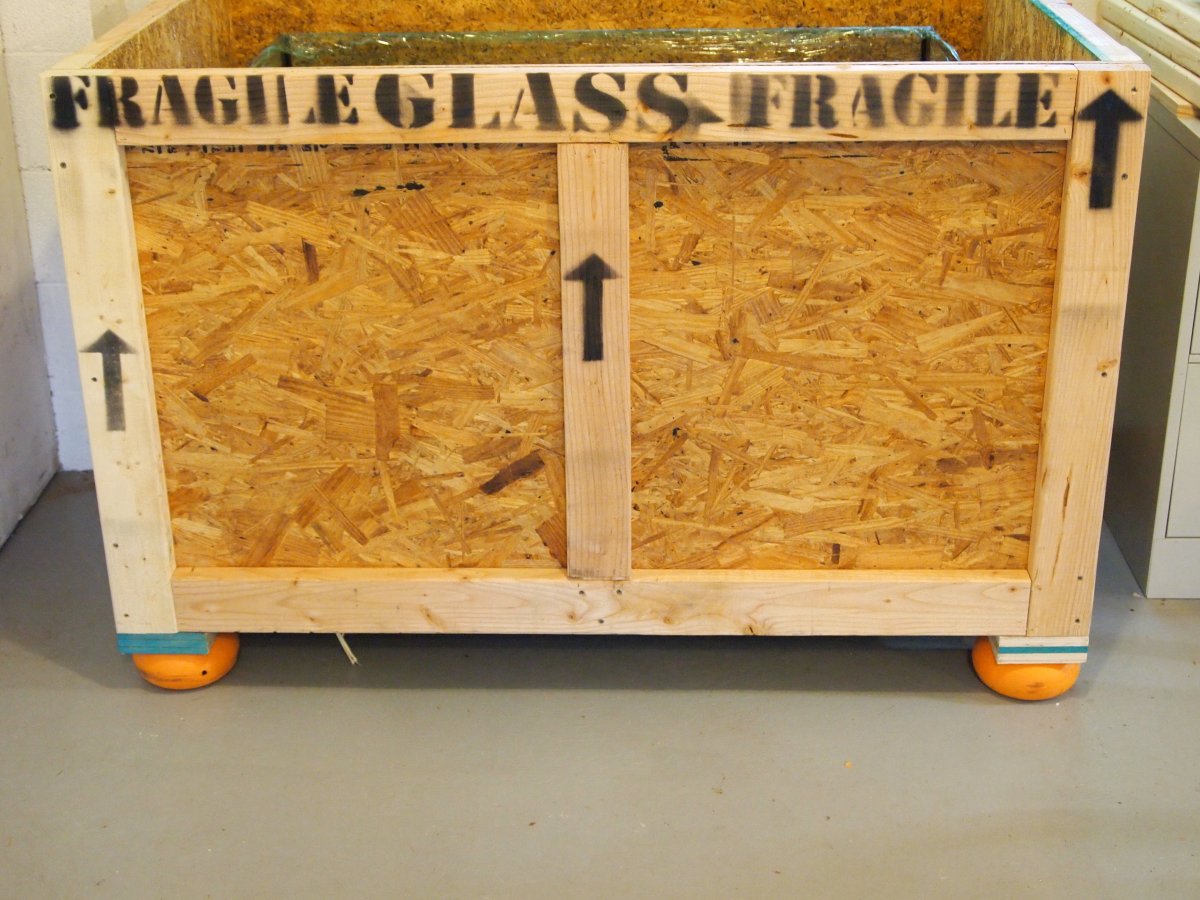 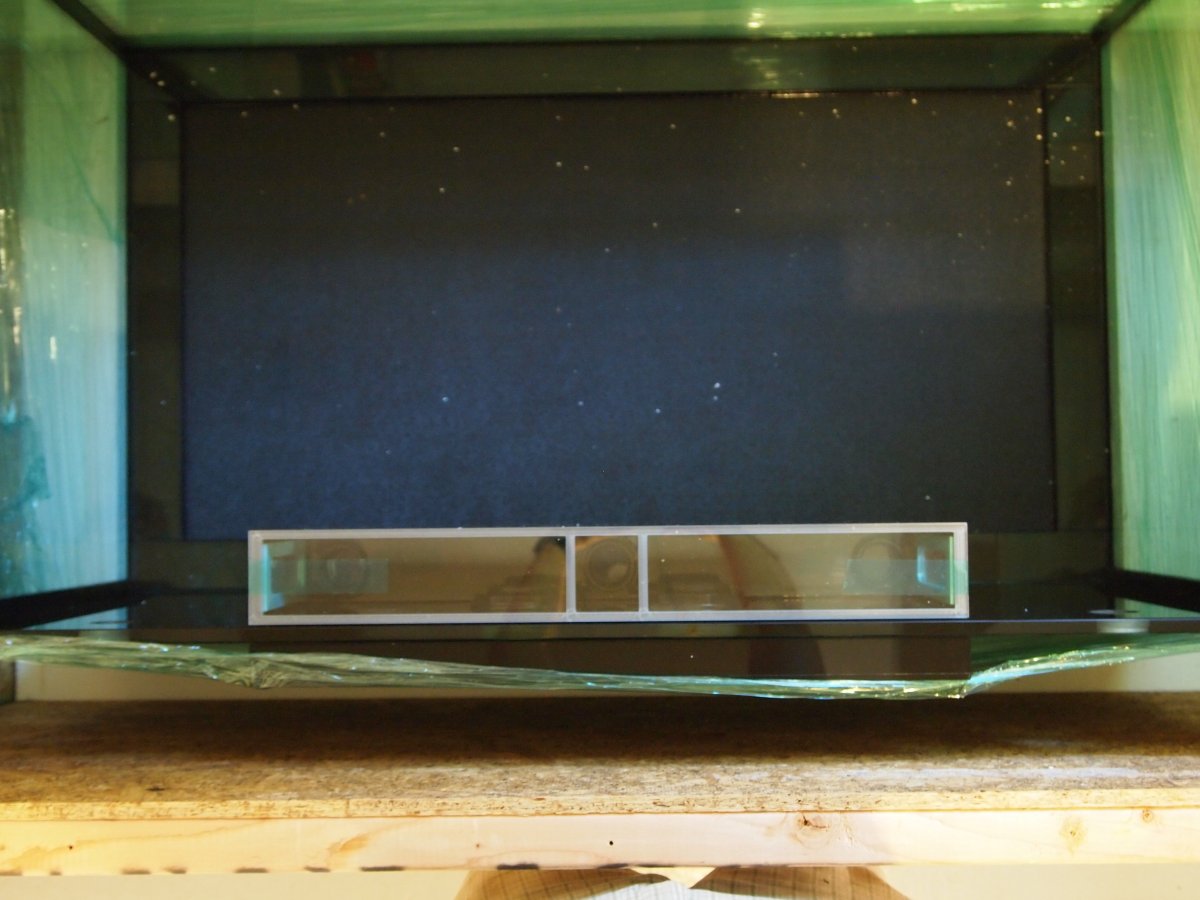 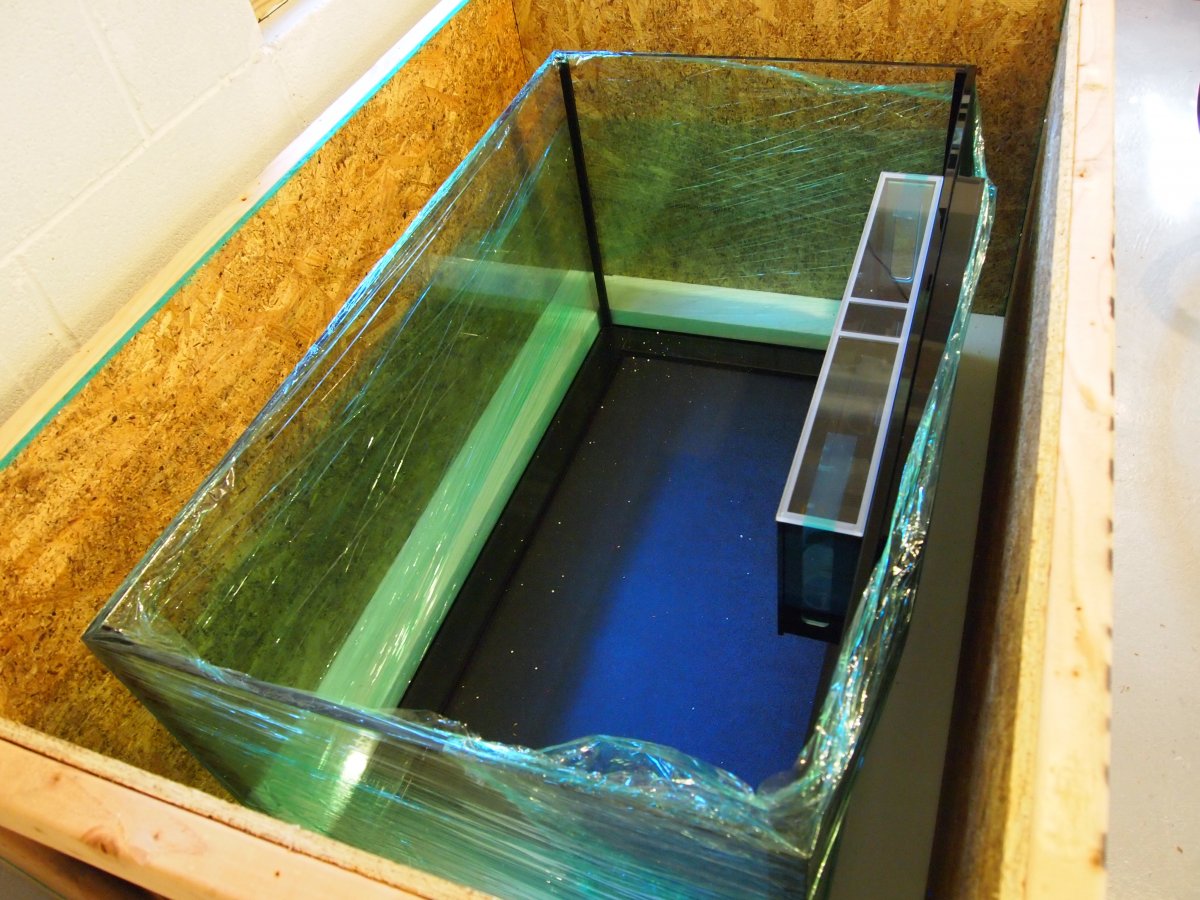 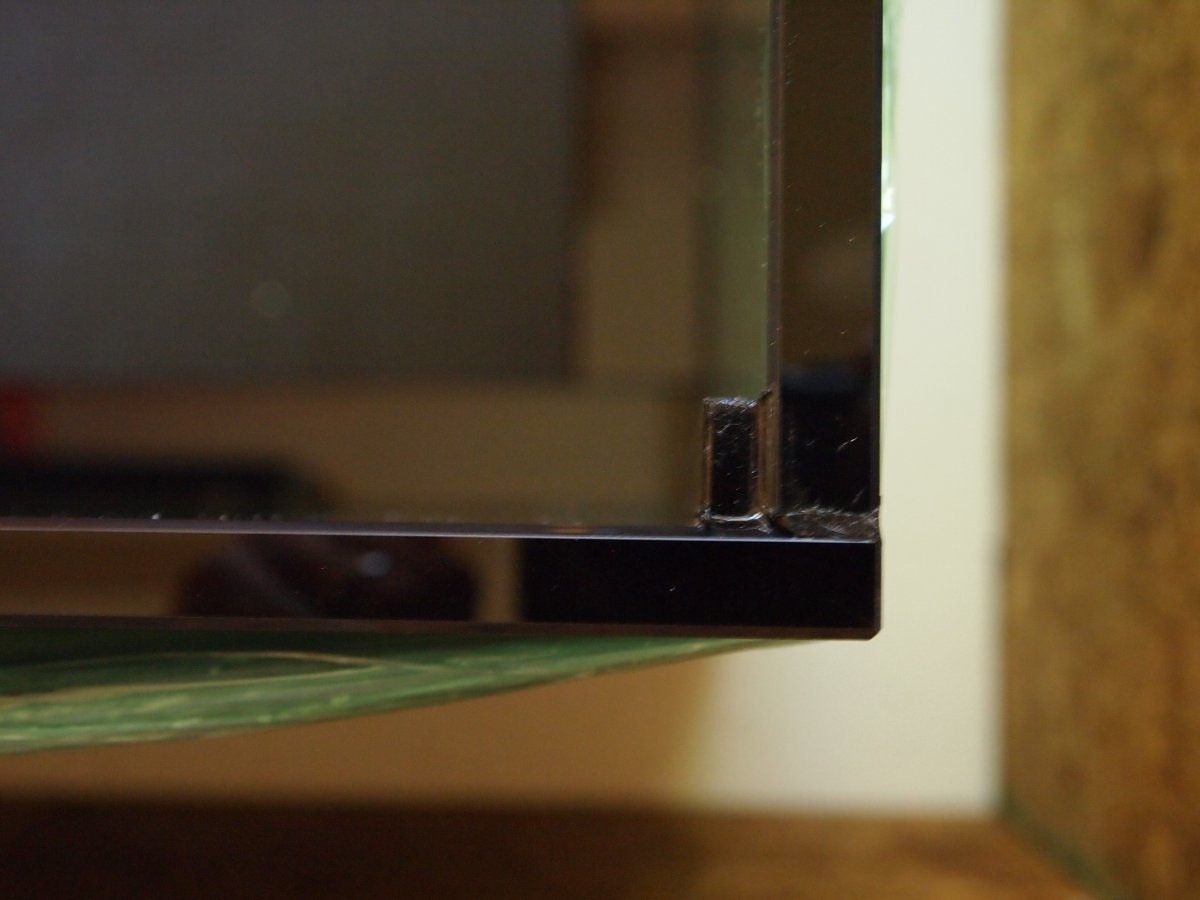 
When setting up my current AIO 40 gallon rimless tank, I was really going for a very specific look. Since the tank didn’t need a sump, I wanted it to “float” on an industrial stand of some sort. I plan to use the same stand for the Reef Savvy, although this tank will have a sump, which will be hidden in a cabinet next to the main display. Here is a sketch of what it will look like. 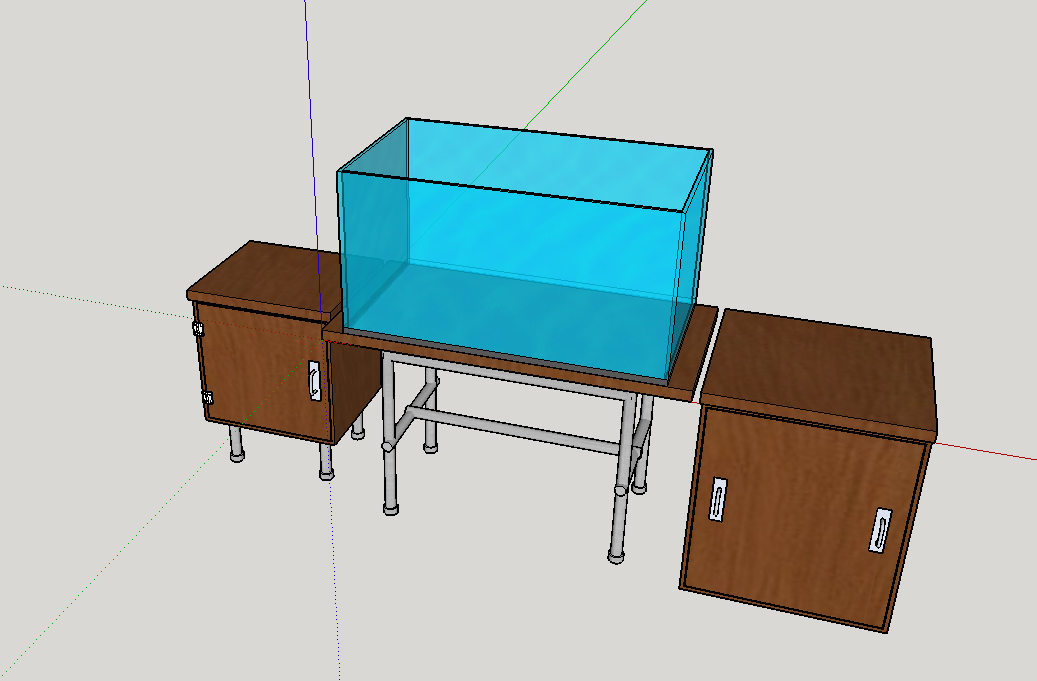 The room is rather small - its an office/TV room so I wanted to keep things simple and hidden. Its also why I opted to not go for a larger tank.

Here is a photo of the previous tank on the same stand. The stand is made from steel pipes and 1.5" thick walnut. 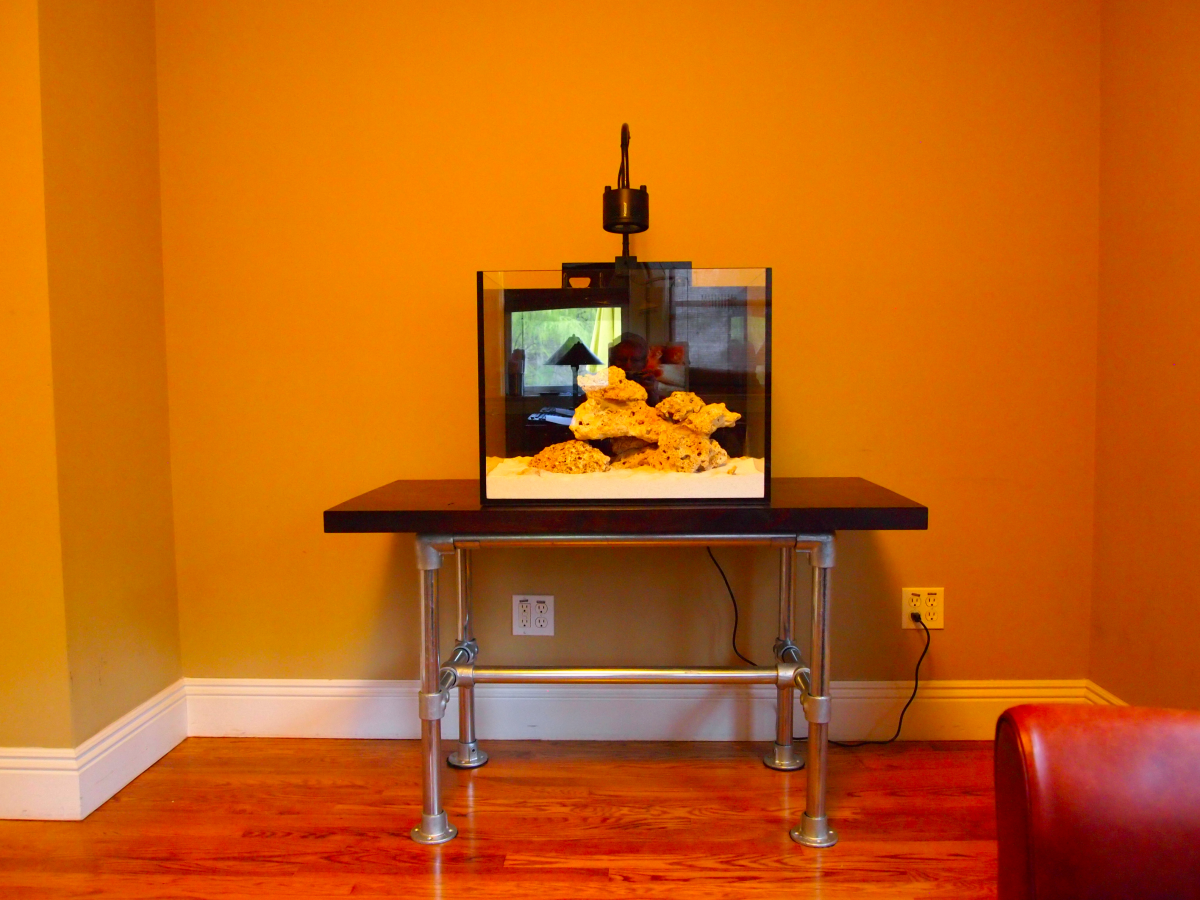 Brett thanks for following.

choss said:
Here is a photo of the previous tank on the same stand. The stand is made from steel pipes and 1.5" thick walnut.

What tank is that?
OP

brett_schn said:
What tank is that?
Click to expand...

Its a 40 gallon Innovative Marine AIO tank. Its actually a great tank but just a bit limiting in keeping any bigger fish.

choss said:
Its a 40 gallon Innovative Marine AIO tank. Its actually a great tank but just a bit limiting in keeping any bigger fish.
Click to expand...

Thanks. How did u make the stand. What’s it made of. Could u send me build plans maybe?

That's going to be a very cool set up!

brett_schn said:
Thanks. How did u make the stand. What’s it made of. Could u send me build plans maybe?
Click to expand...

I will create a detailed post on the construction of the stand and the cabinets so stay tuned.

Thanks buddy. I'm hoping I can get this tank to look as good as yours some day. I'll be hitting you up in a few weeks for some frags...

Jimbo thanks for tagging along. I should get a bunch more details documented by this weekend. So much to do!
OP


The size of this tank is 42” long X 24” wide X 22” high. Coming off a 24” wide cube tank, I wanted to upgrade to a larger tank that still fits the size of the small office I am using to display the tank. The look I am going for is a tank that “floats” on a pedestal stand. In thinking through the dimensions, I wanted to strike a balance between length, depth and height. While I appreciate the practical nature of shallow reef tanks, I enjoy the taller tanks as well, especially as this allows for fish to take up residence at various levels within the tank and makes for a visually pleasing experience. And I wanted to remain “close” to the details of the tank – which one thing I love about smaller nano tanks.


I also thought long and hard about the balance of tank volume (stability) v. maintenance and equipment costs. I have followed many threads where reefers go for very large tanks, and eventually scale back down to something more reasonable.


I plan to run this tank leveraging top technology for automation and reliability. I travel quite frequently so it’s critical that I can run the tank on auto-drive and monitor it remotely. Here are a few things I have planned and will detail in future posts:


· Water changes will be automated. I’m a big believer in stability so I’ll be shooting for lots of small automated water changes per day. No more carrying buckets!

· Controller – This will be my first tank on a controller. The controller will be used for water quality as well as failsafe for the AWC system. It will include high and low water alarms, water spill alarms, cooling fans, etc. I do not plan on running a chiller on this system.

· Dosing – I will dose Alk and Calcium. I am not planning on adding a calcium reactor and may supplement with kalkwasser in my ATO.


If all goes as planned, I’ll really only be cleaning my skimmer and harvesting algae from my refugium. I am still debating running a filter sock or not, so I’d love to hear some pros & cons on this.


Here is a little teaser of what is to come…. 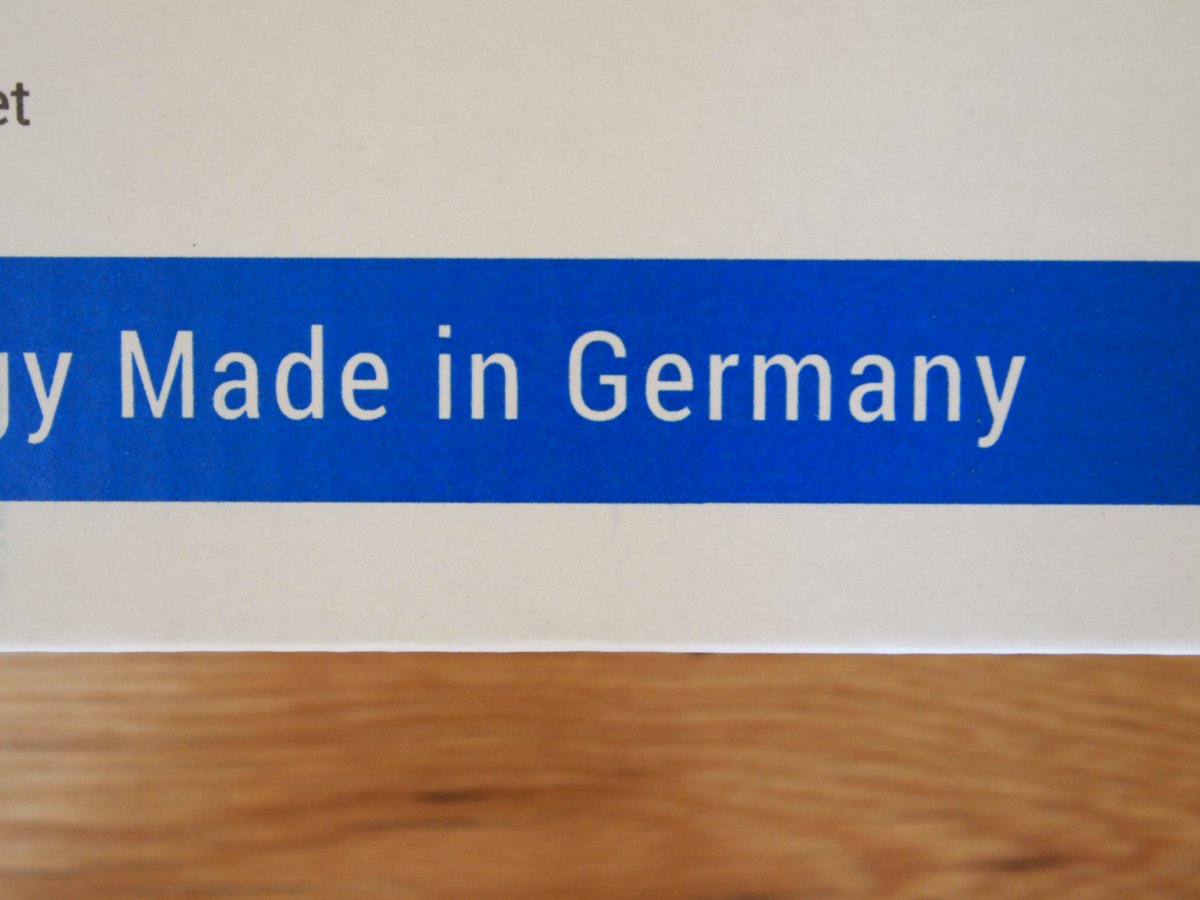 Glad you FINALLY got your tank! Looking forward to the build thread and of course eventually seeing it in person at a club meet up. [emoji1303]
OP

Yeah it was a long wait but worth it. And of course now that I have the tank, I've still got a few weekends of prep work to do.

I love where your going with this and it's clear you've thought about every aspect of the tank.
If I'm right that light fixture should just "top" the tank off

You are right of course but adding a twist. More to come on this topic for sure.

choss said:
You are right of course but adding a twist. More to come on this topic for sure.
Click to expand...

Awesome can't wait to find out!

Excellent news! Let the plumbing begin . FYI, I'm moving to Peekskill in a month so I'm in the middle of a huge re-plumbing job myself.
OP

jgvergo said:
Excellent news! Let the plumbing begin . FYI, I'm moving to Peekskill in a month so I'm in the middle of a huge re-plumbing job myself.
Click to expand...

Let me know if you need help with the move.
OP


Over 20 years ago I moved into a small NY city apartment with my wife. We were about to get married and I broke down my bachelor pad in Hoboken to arrive with a 30-gallon reef tank and 2 cats. To say the least, she has some interesting memories of water on the carpet, RODI hooked up to the bathroom sink, a few random wires etc. So, I promised her this time around would be different.


I have to admit that when I first saw the Innovative Marine tanks, I was impressed. Rimless, clean design, and no sump to worry about. So I focused on building a system that my wife would appreciate more as art than the nasty science experiment in our living room. And at the time I was really over the typical hood and cabinet below the tank. So I opted for a stand that would float.


My original idea was to build a butcher-block top and then use industrial pipe pieces to build the structure. I was inspired by a few industrial pieces I spotted at a place in Connecticut that creates amazing furniture out of reclaimed industrial machines they must buy for almost nothing. Here are a few of the pieces that inspired me. 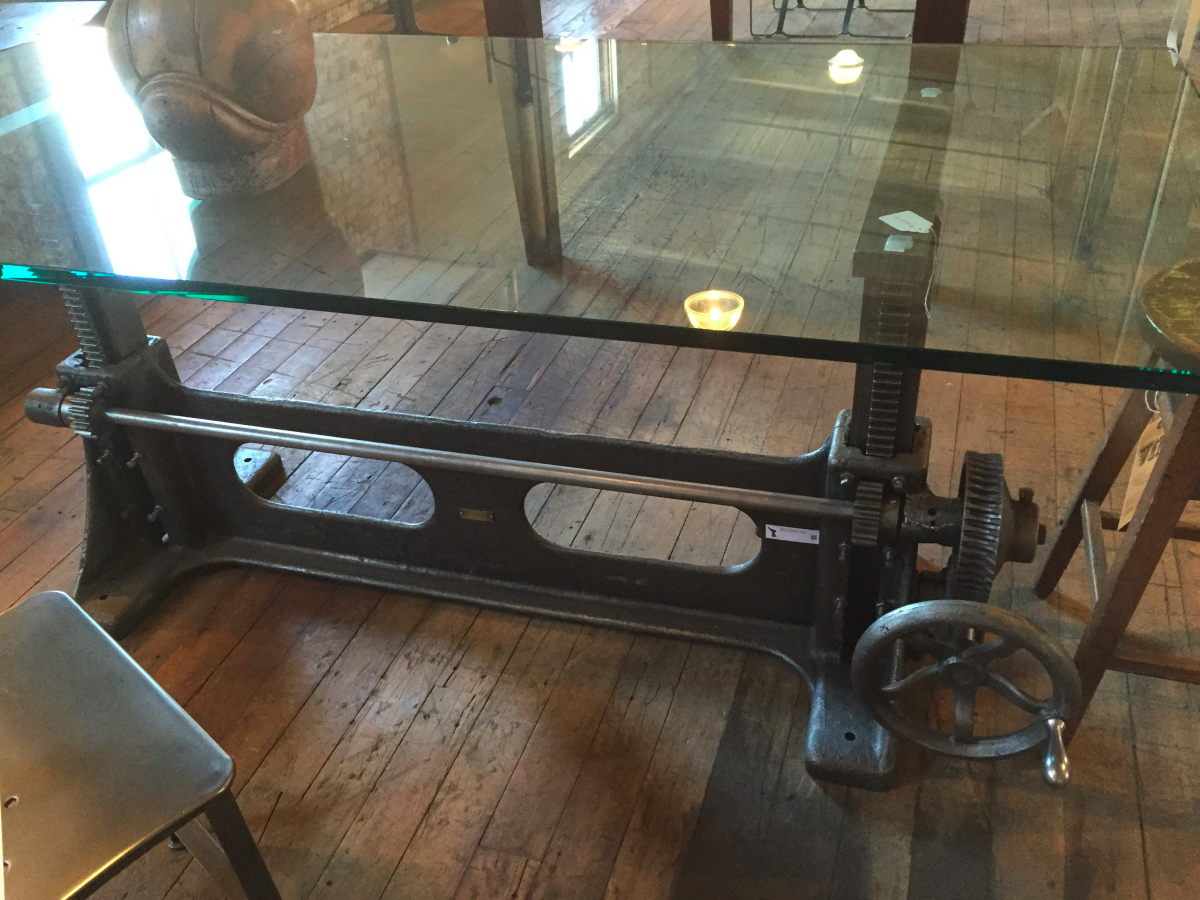 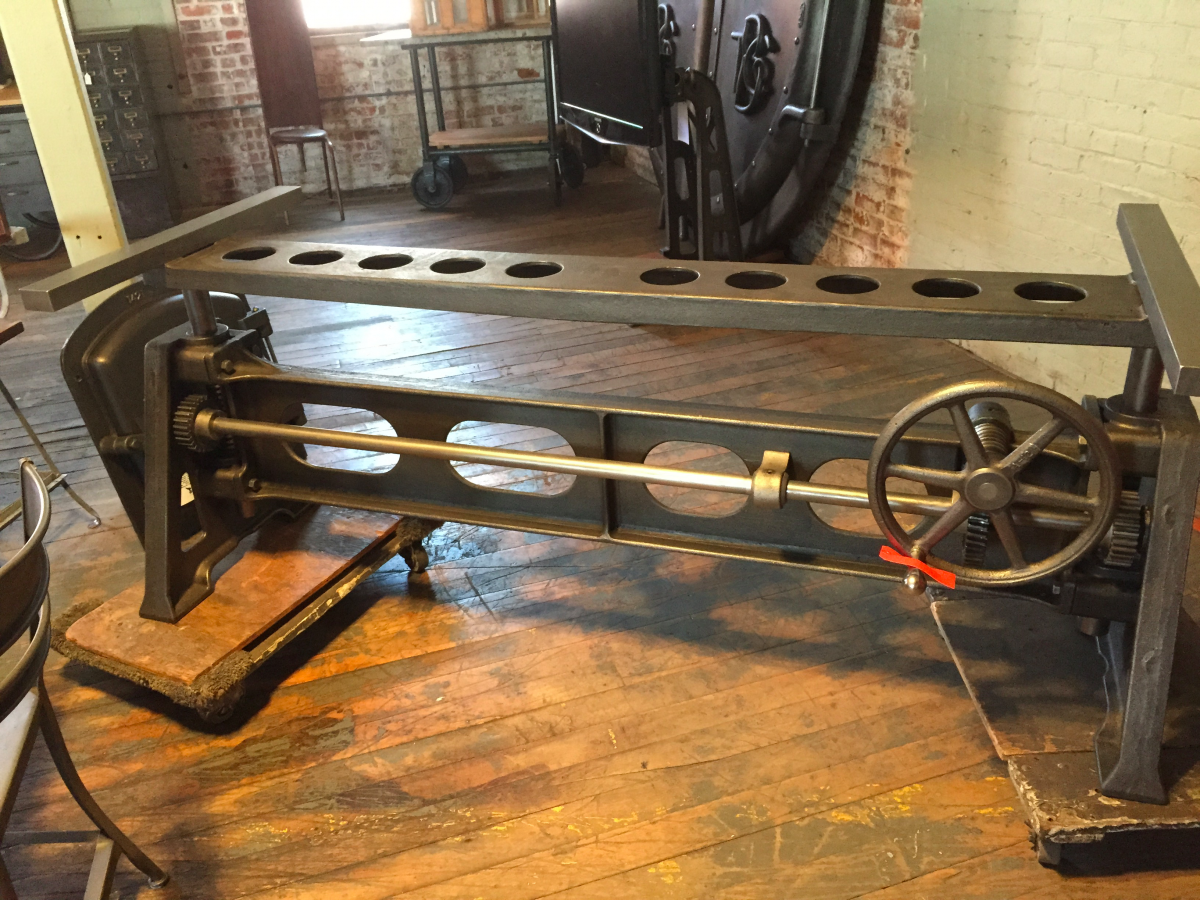 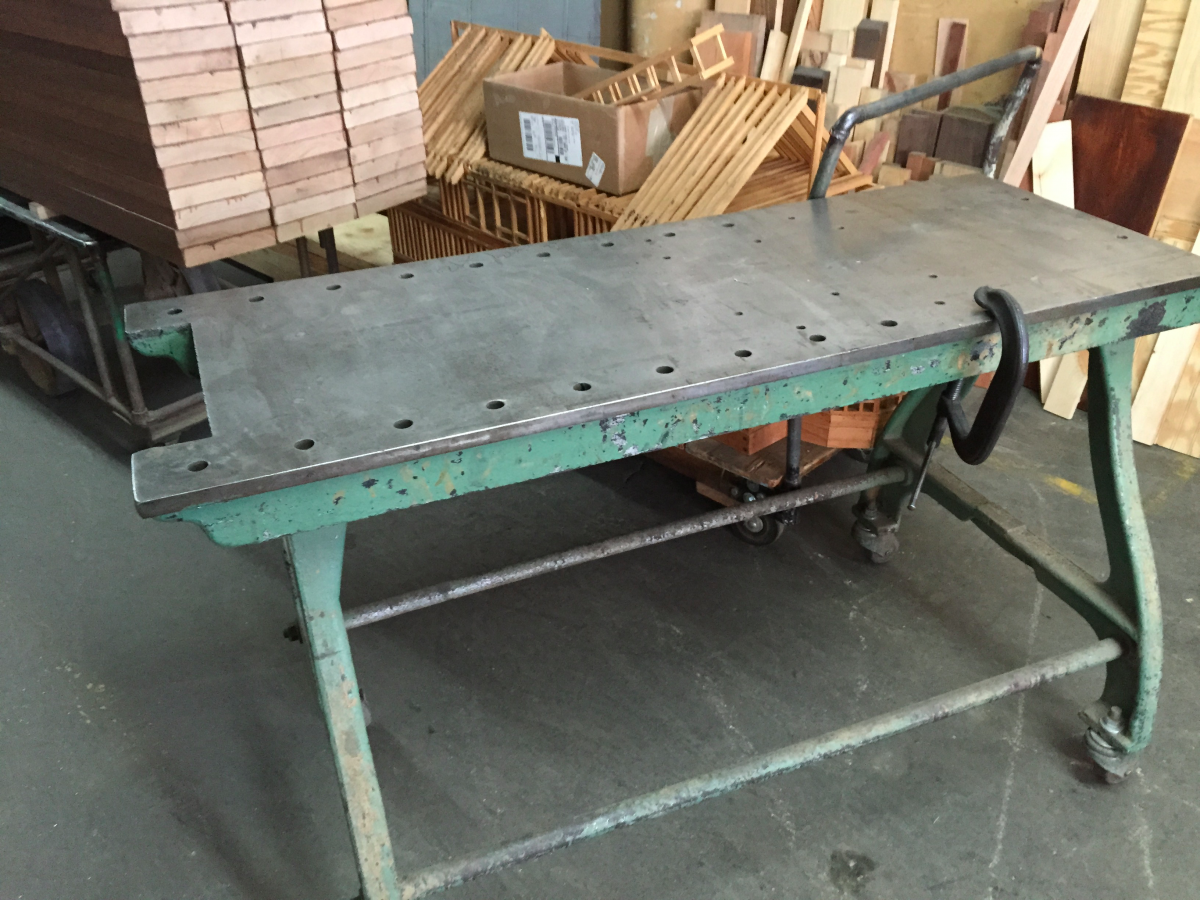 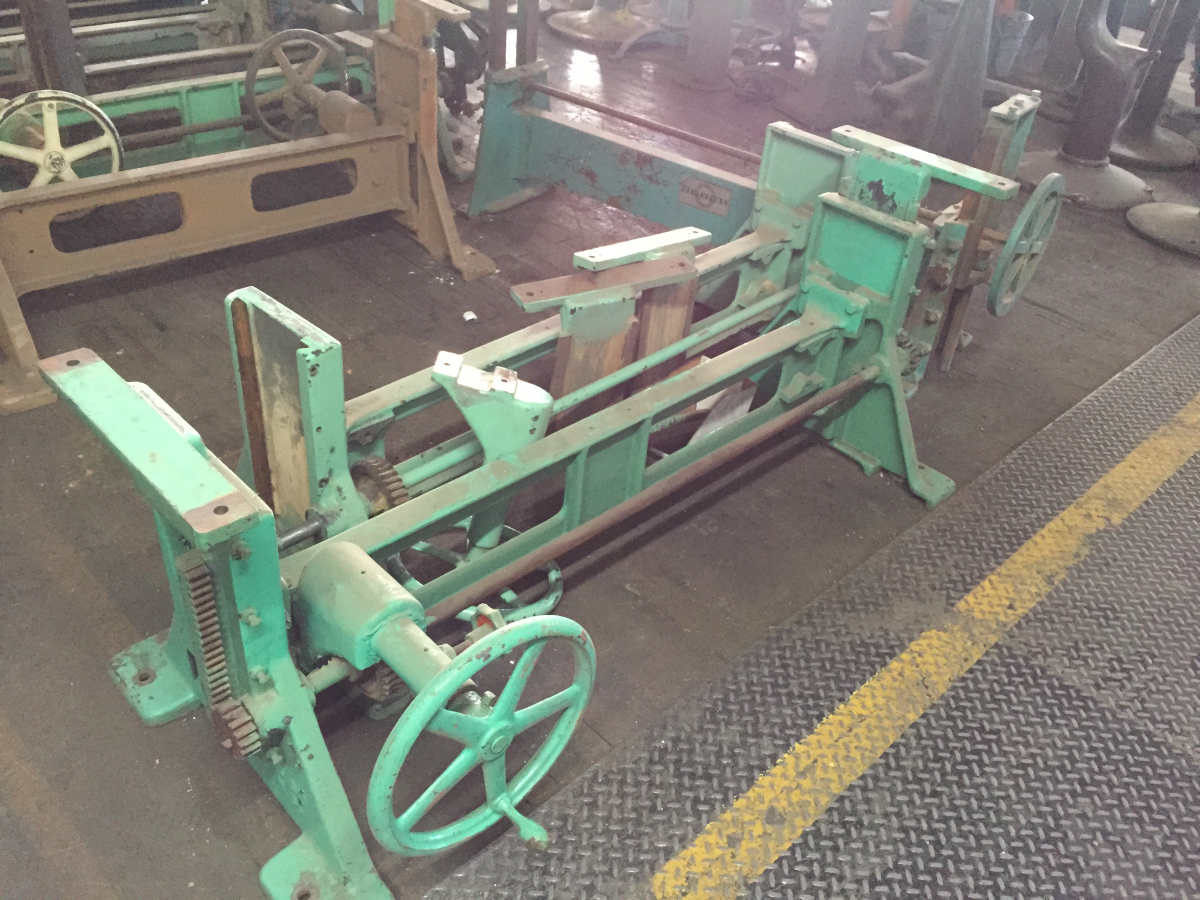 Then after lots of google image searches I picked up on a site called simplifiedbuilding.com. They sell industrial pipe kits for desks, shelves and other applications. I now had a super strong support frame and all I needed was the wood. I already had purchased the wood to glue up a butcher-block surface, when I found a lumber yard in White Plains NY that carries a huge amount of amazing reclaimed wood. I settled in on 1.5” thick walnut as the main surface for the stand. It came in a long 12” wide piece that I cut to 48” and glued together.

You can see the thickness of the walnut in this picture. Two rows of biscuits did the job. 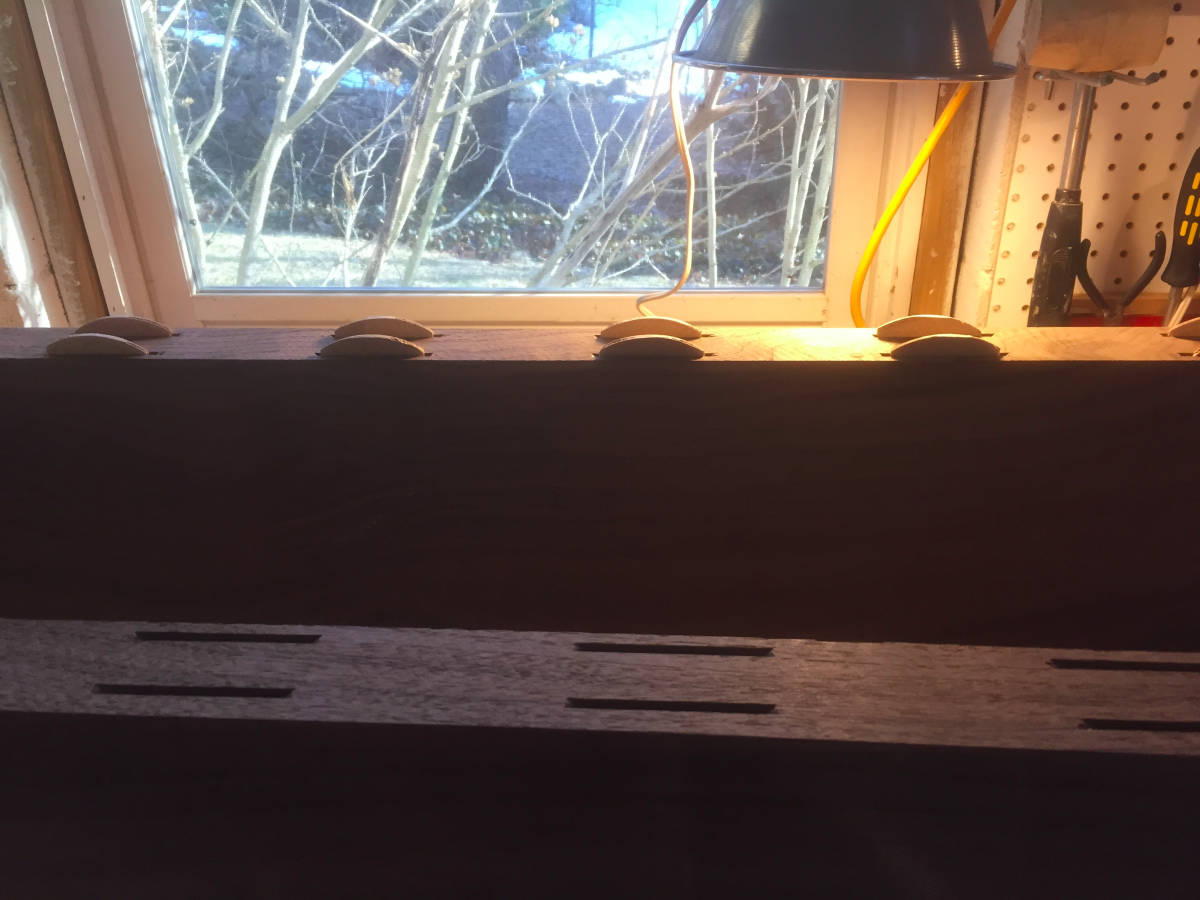 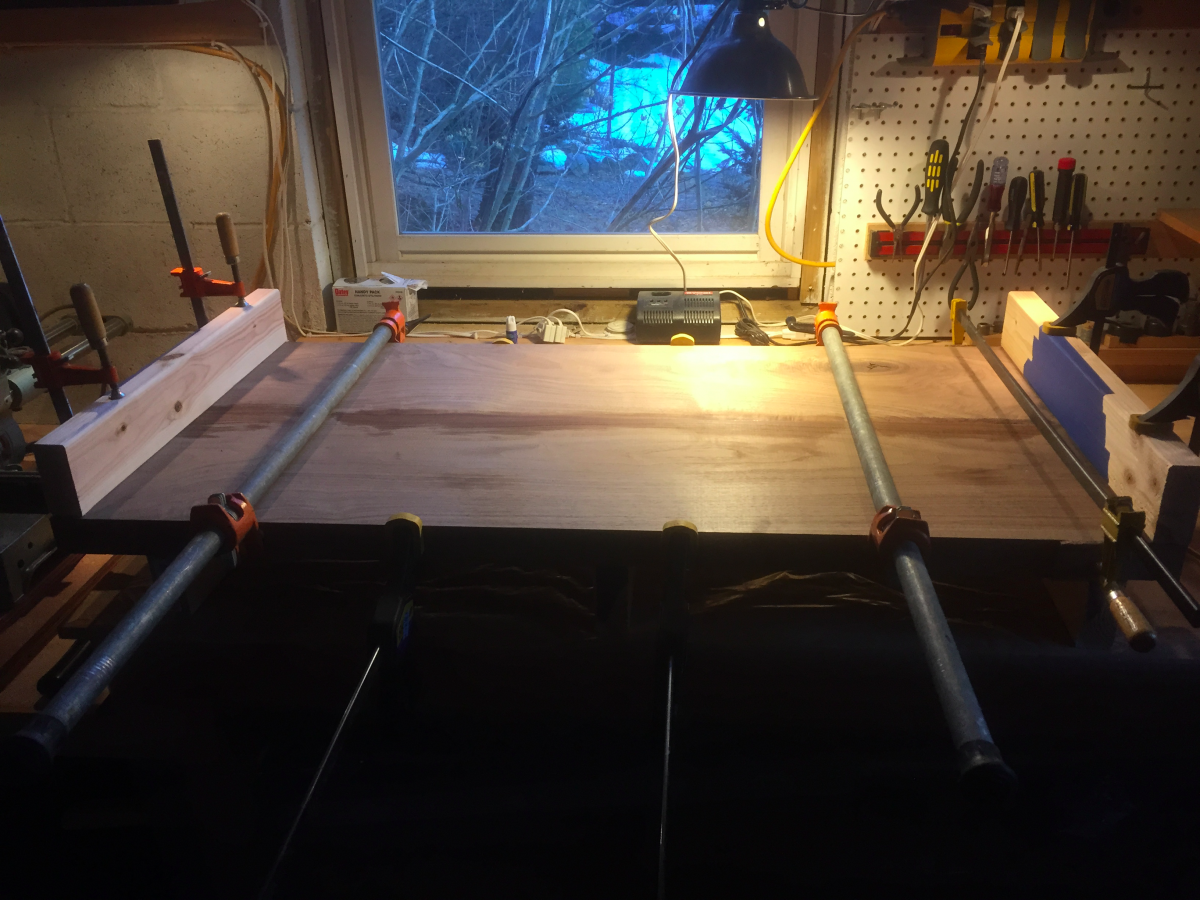 Here is a shot of the wood before 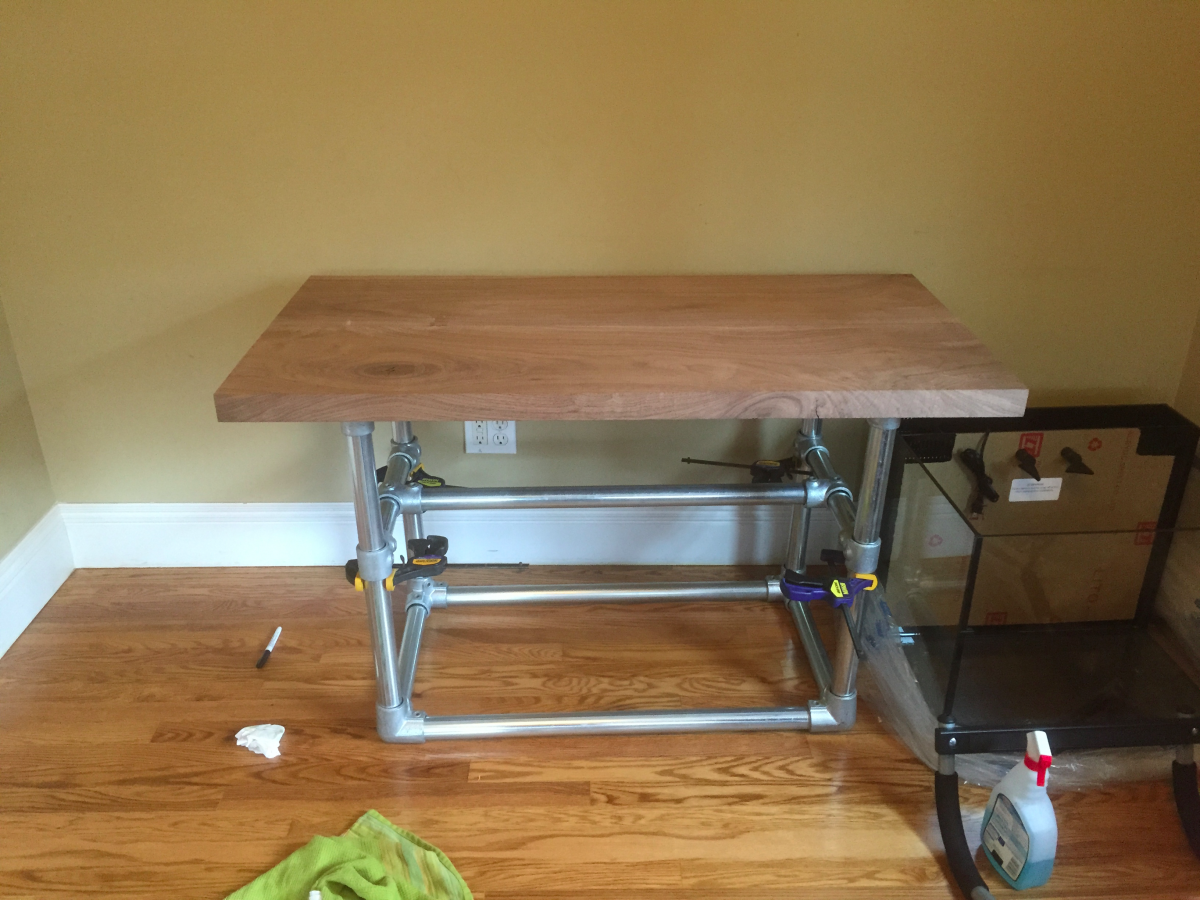 And after staining and poly 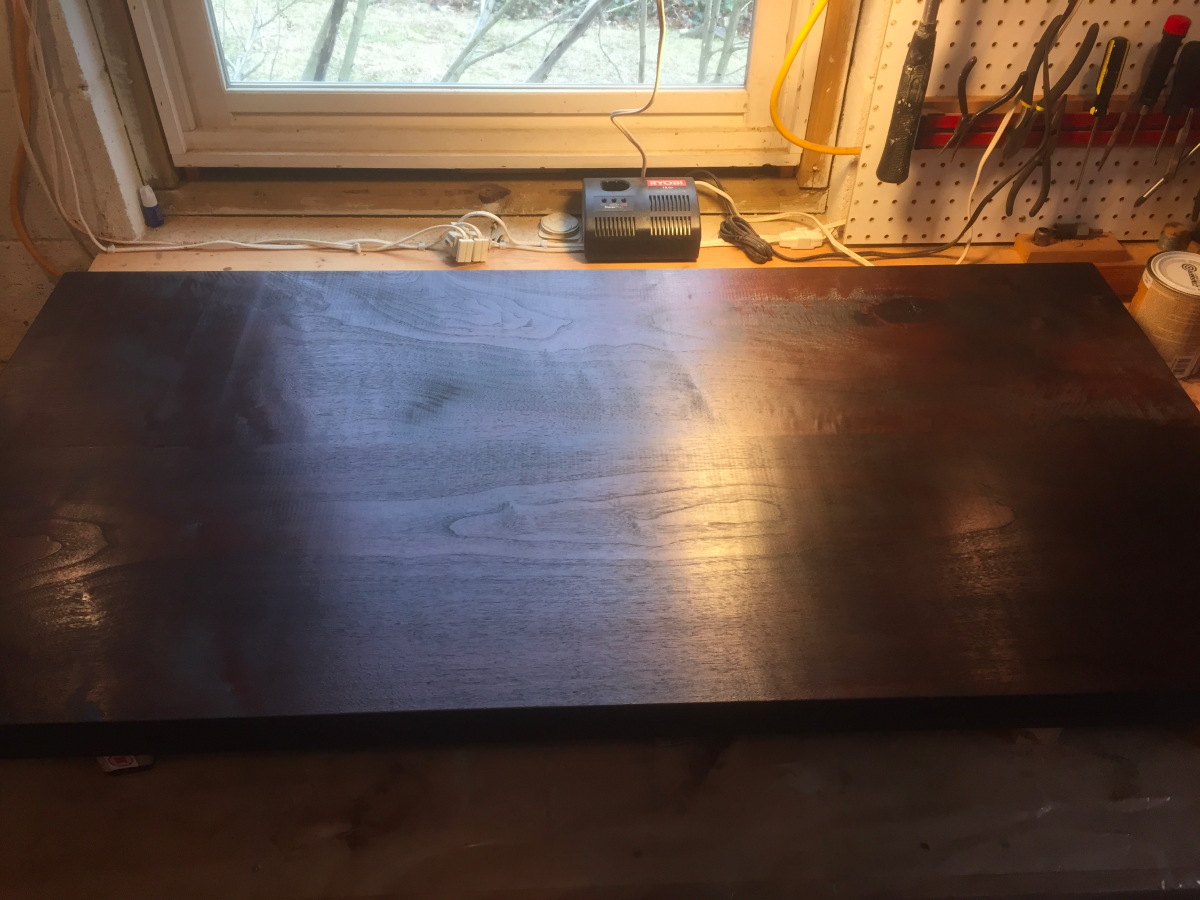 If you ever want to work with Walnut I found this video very helpful
I built the stand specifically so I could upgrade to a larger tank, but I realized that it would look out of proportion to have it hold a full 48” tank so again, I ended up going a little shorter with the Reef Savvy. Is it silly to build a custom tank to fit a stand? Absolutely, but in the end I really fell in love with the stand and the support furniture.

My original build thread was called “the less is more reef”, which sadly now is hard to follow since Photobucket took a big dump on us all and is holding us hostage for our images. Anyway, once I set up the 40, I quickly realized that I had a mess of wires that most reefers hide in their very practical cabinet beneath the tank. So, I started building a cabinet to hide the electrical and the top off container. The supporting cabinet is made of a walnut top, and a combination of boards for the sides consisting of walnut, poplar, and pine glued together at different lengths and widths to give the cabinet some variety in tones. However, once I applied the same stains as above, all the wood pretty much looks the same. Still, I like the way it turned out. 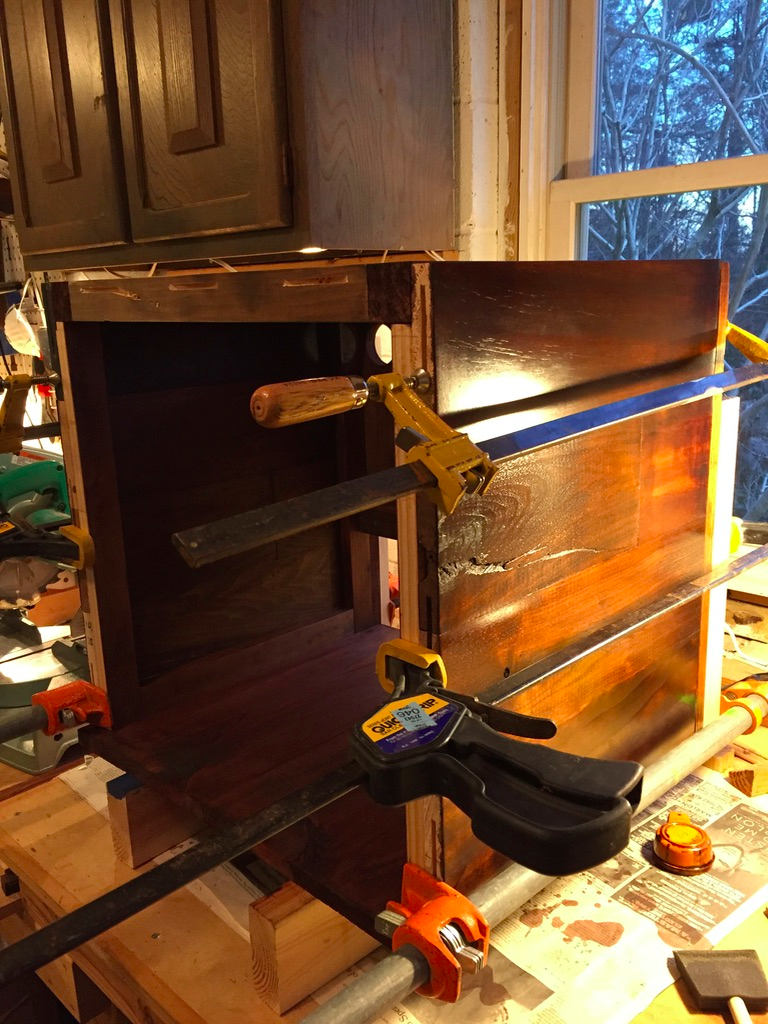 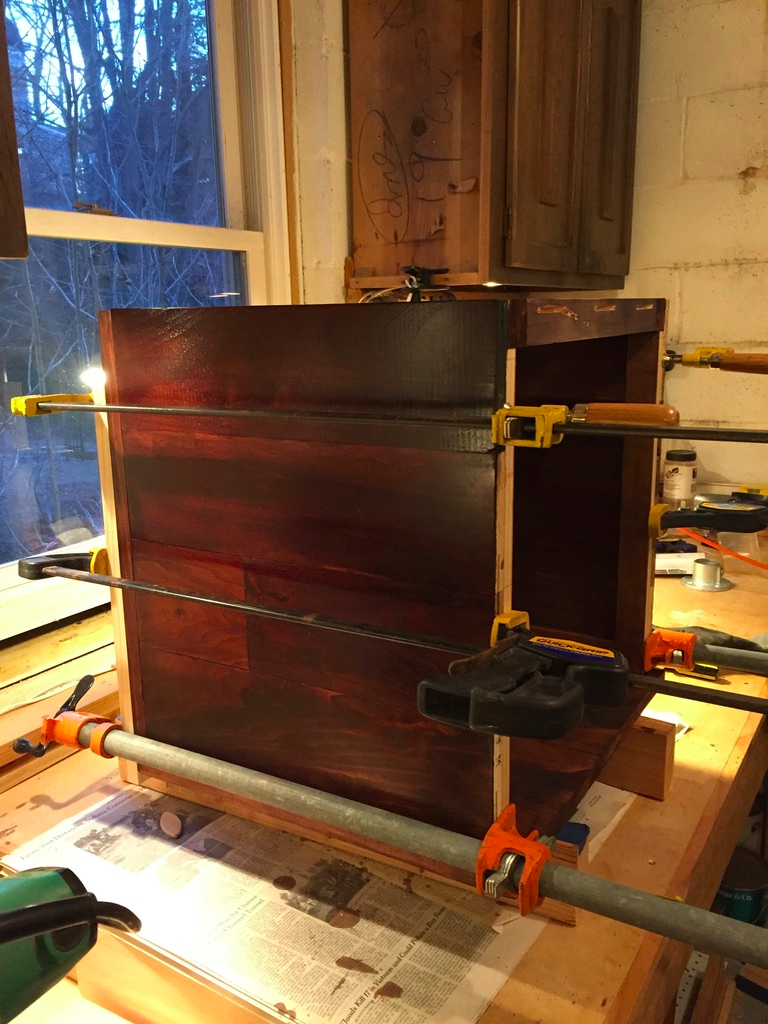 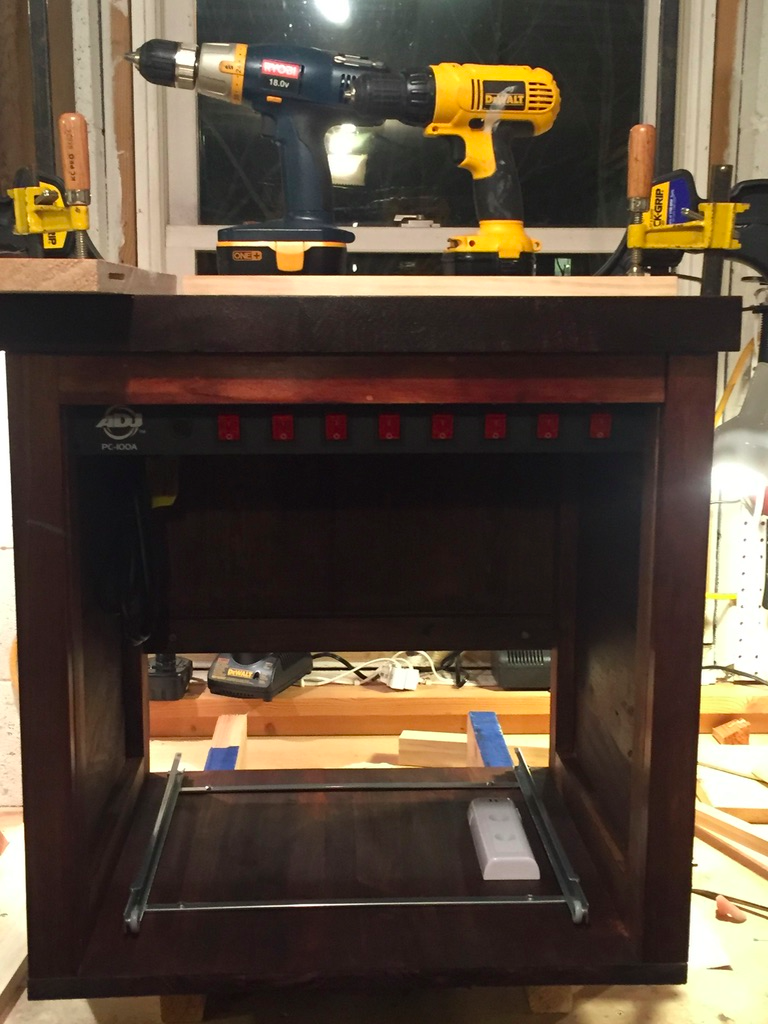 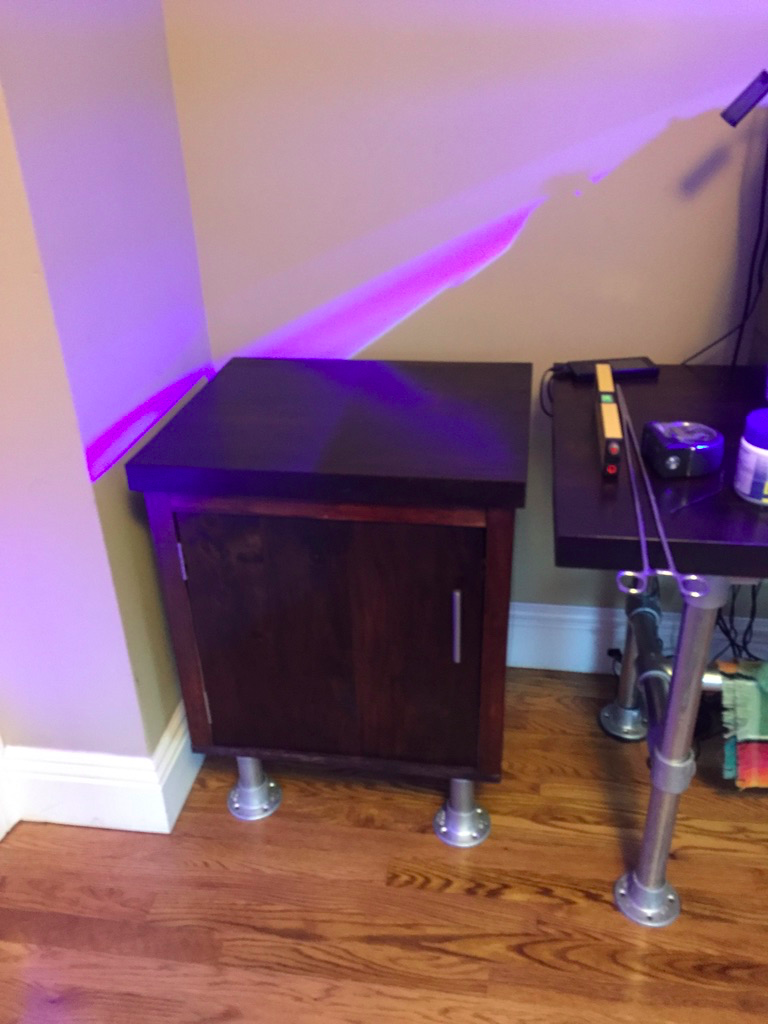 By the time I finished my cabinet I started to have a vision about the dream tank. The next day I called Felix at Reef Savvy and started to plan things out.


The final layout for the tank will be as follows: 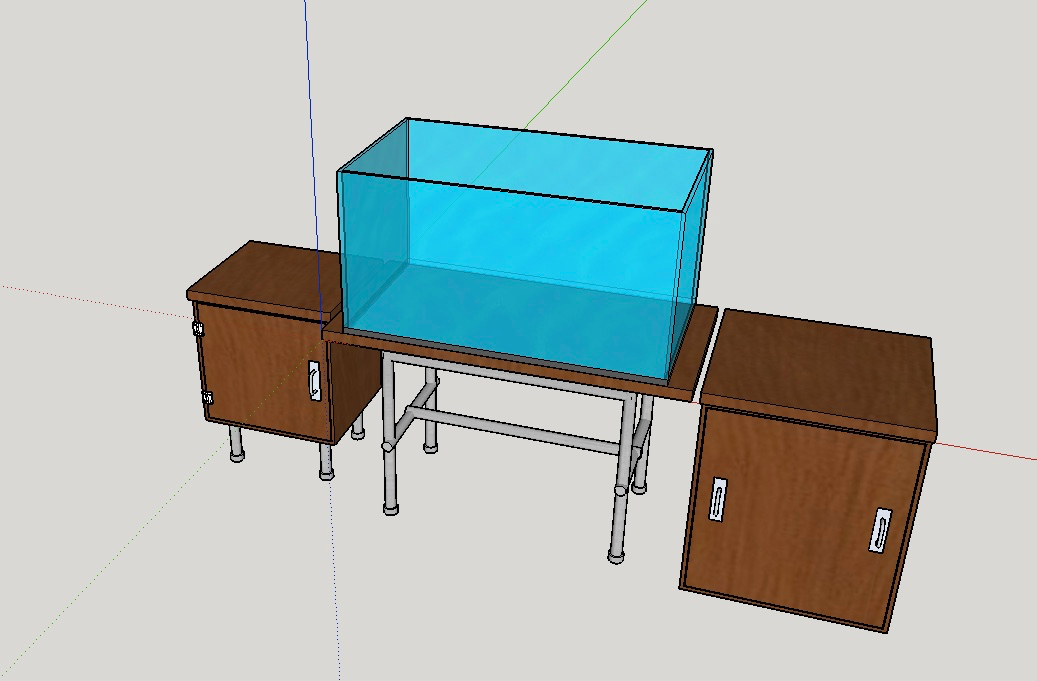 The new tank will have a 24 gallon sump hidden in a new cabinet to the right of the tank. This means that I will attach a board behind the legs of the display stand that will hide both the plumbing and the electrical, which will be located in the cabinet to the left. Top off will be moved to a room directly below the DT (more on this setup in a future post).
Last edited: Jul 6, 2017