The rebuild of my cube has officially began.

To keep it short I decided to rebuild my cube for a few reasons. First I had set it up a few years ago and wasn't focused on it at the time so I just let it stabilize. I did water changes and kept the glass clean. But I had only a few soft corals, my yellow tang, and a few chromis. I decided I was ready to get back into the cube and do it right. First issue was the tank had become over ridden with Hydroids, vermintide snails, and flat worms. I treated for the flat worms 3 times with no success. They would come back after a few months. With these issues I wasn't comfortable spending the time or resources on coral and new fish. I made the hard decision of just restarting it, moving the tank to a better location to allow for some automation and have it near my other aquariums. 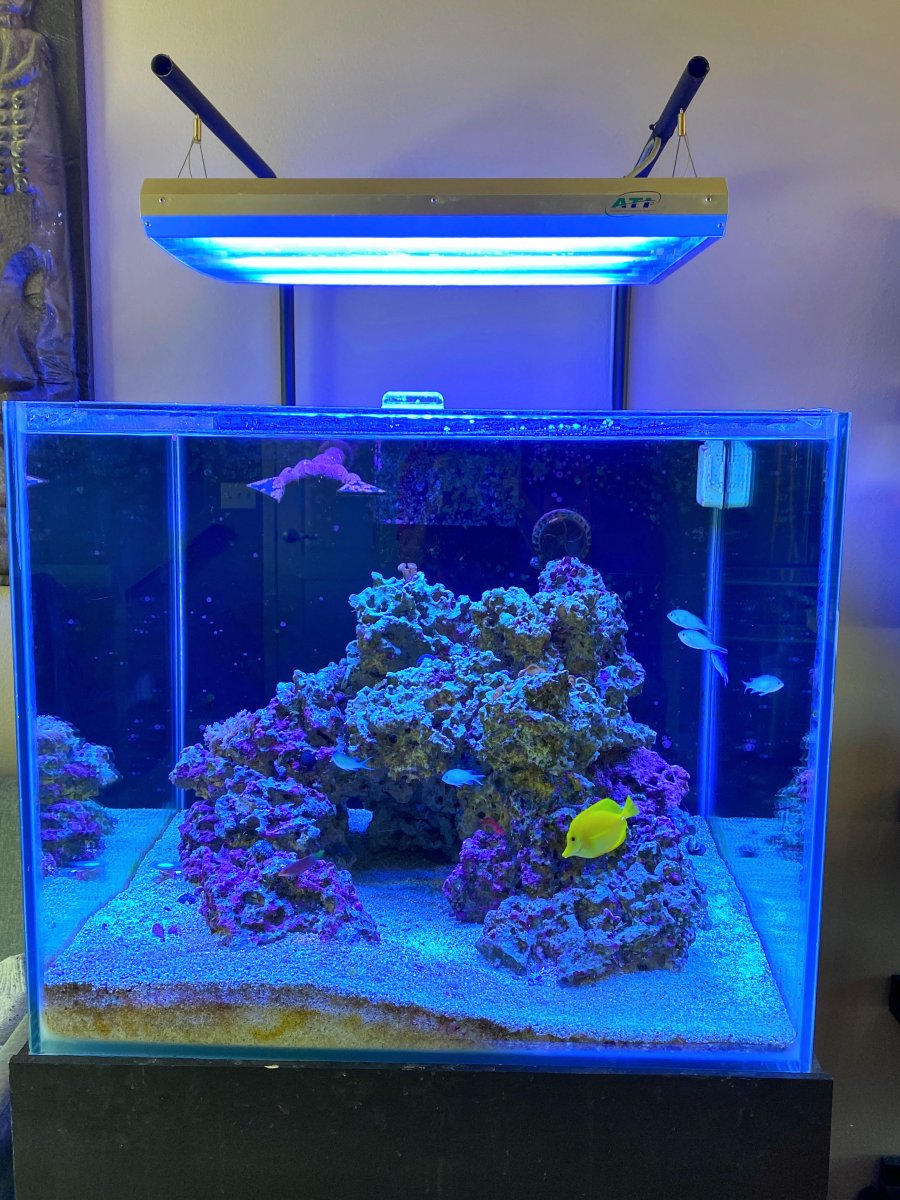 First thing was I built a 40g breeder stand and grabbed a 40g I had in the garage that I was going to use as a sump at one point but didnt. This was going to be my temporary tank for my few coral and my fish while the rebuild and cycle takes place on the cube. As Im sure you all know, when you have been in the hobby for awhile you have enough odds and ends laying around to toss a whole new tank together. Its been going fine. I don't plan to use any rock or sand that is in this tank. I will eventually frag off any corals I have on the rocks and put them on frag plugs so that I don't re-infect the new system. 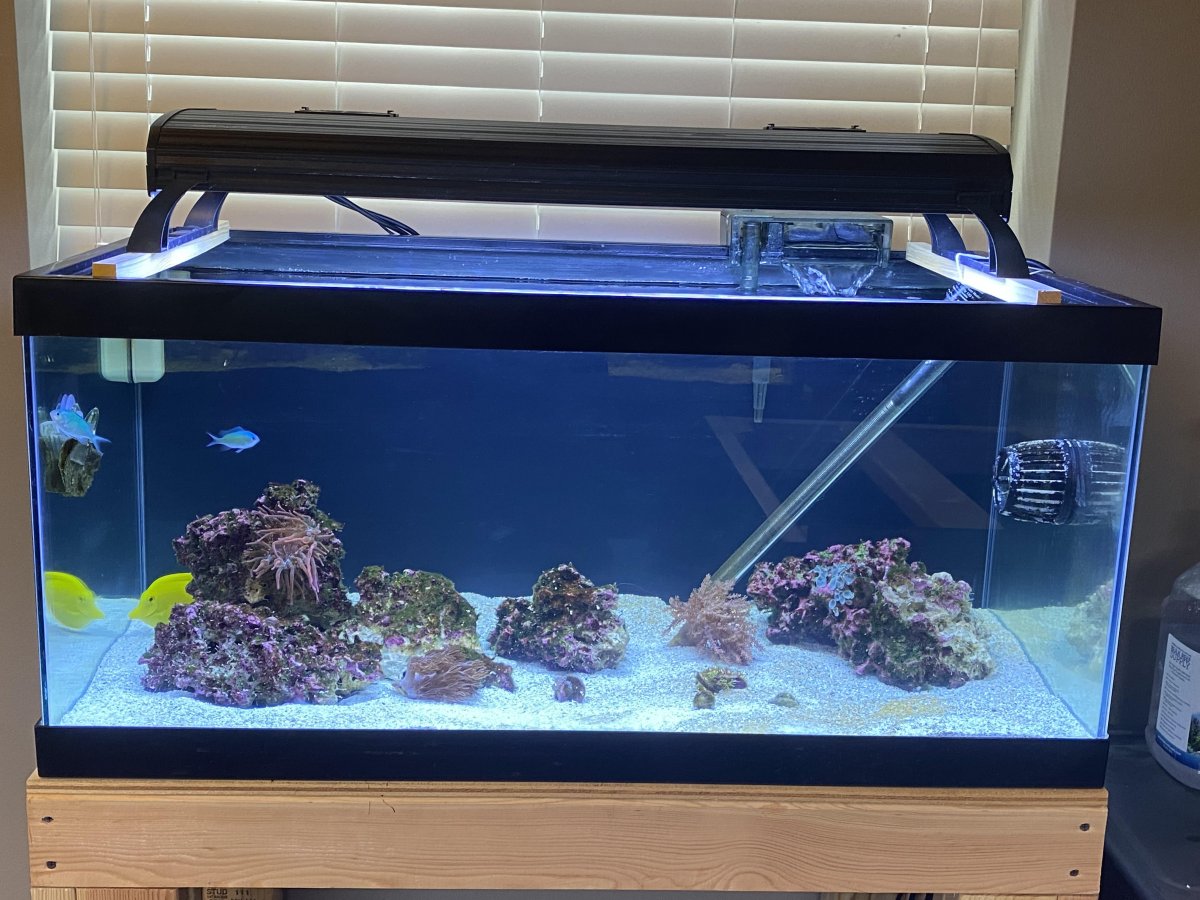 After I got the 40g set up I started breaking down the 93g, I removed all the plumbing, tossed all the sand. I ended up acid washing my rock so that I could reuse it. After I did the acid was I put it in a bleach cure and its been in that for about 5 days. It already looks great. Rock is white and doesn't have any life on it anymore. Ill leave it in in the bleach bath a few more days and then ill start the process of removing all of the chlorine. 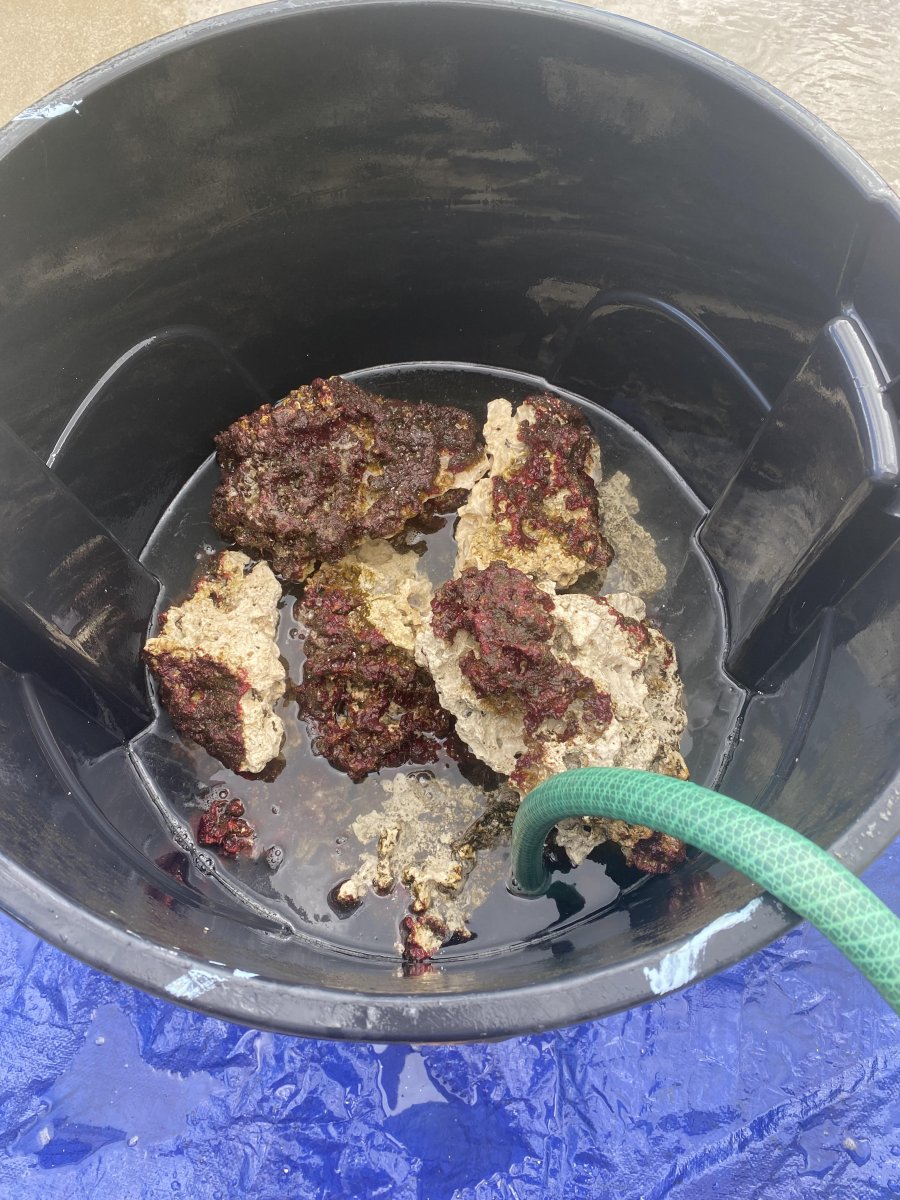 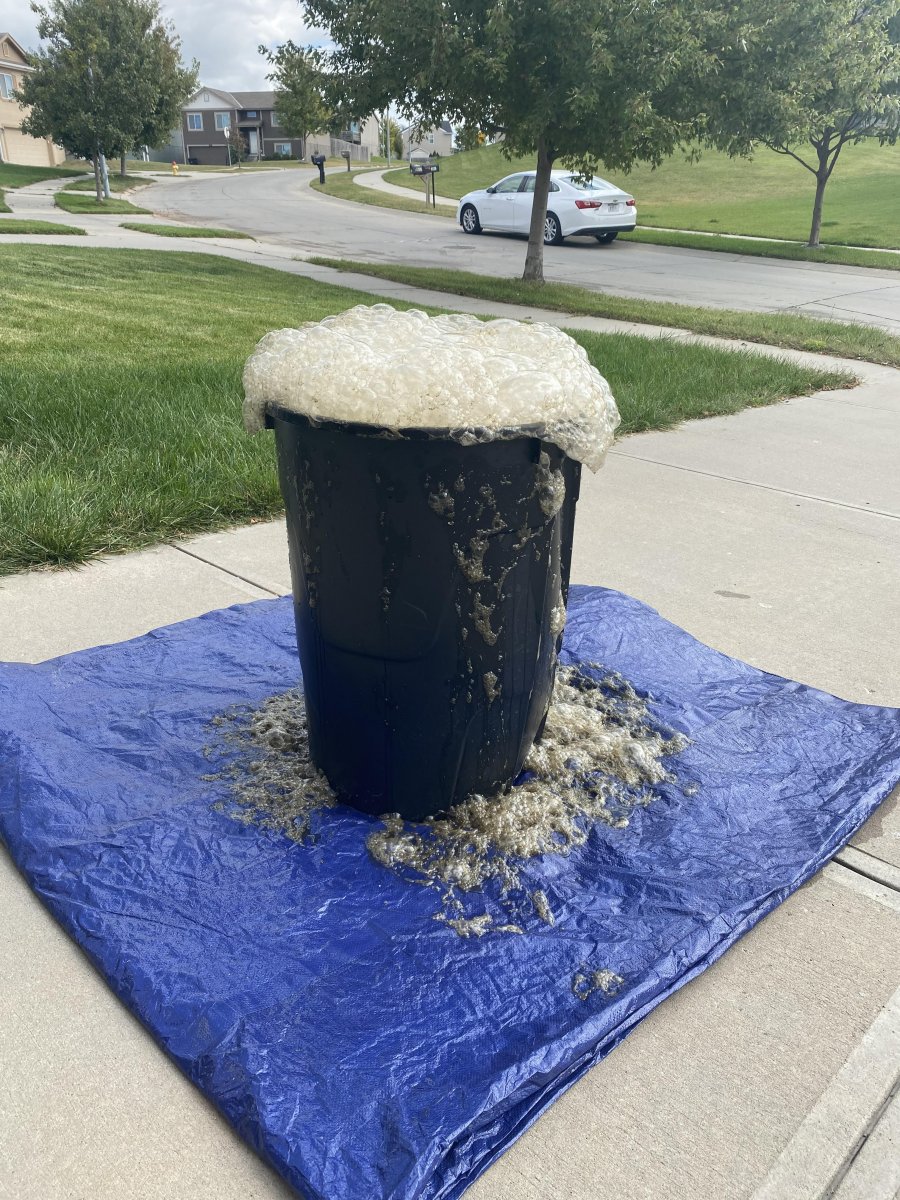 Today my brother in-law and I moved the aquarium and stand from upstairs to its new location in my office/basement. 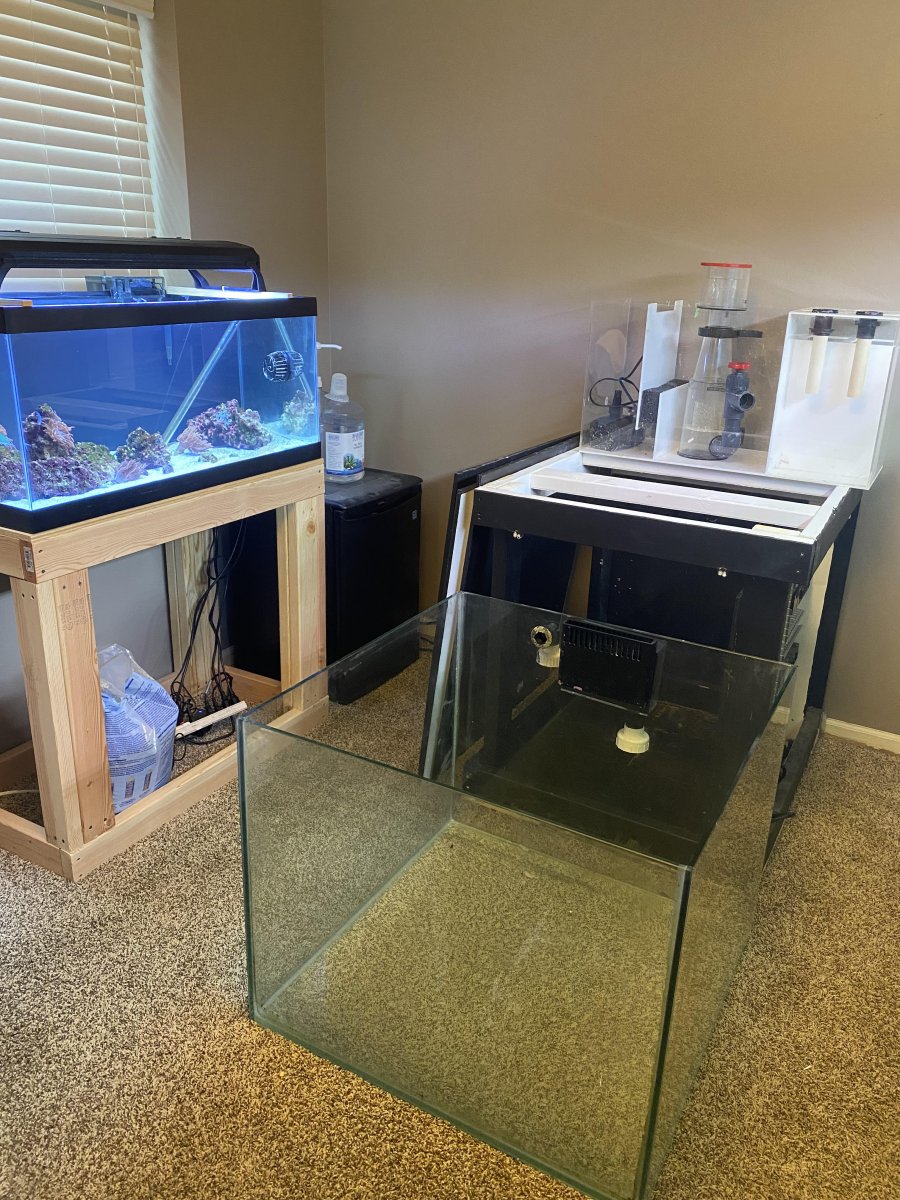 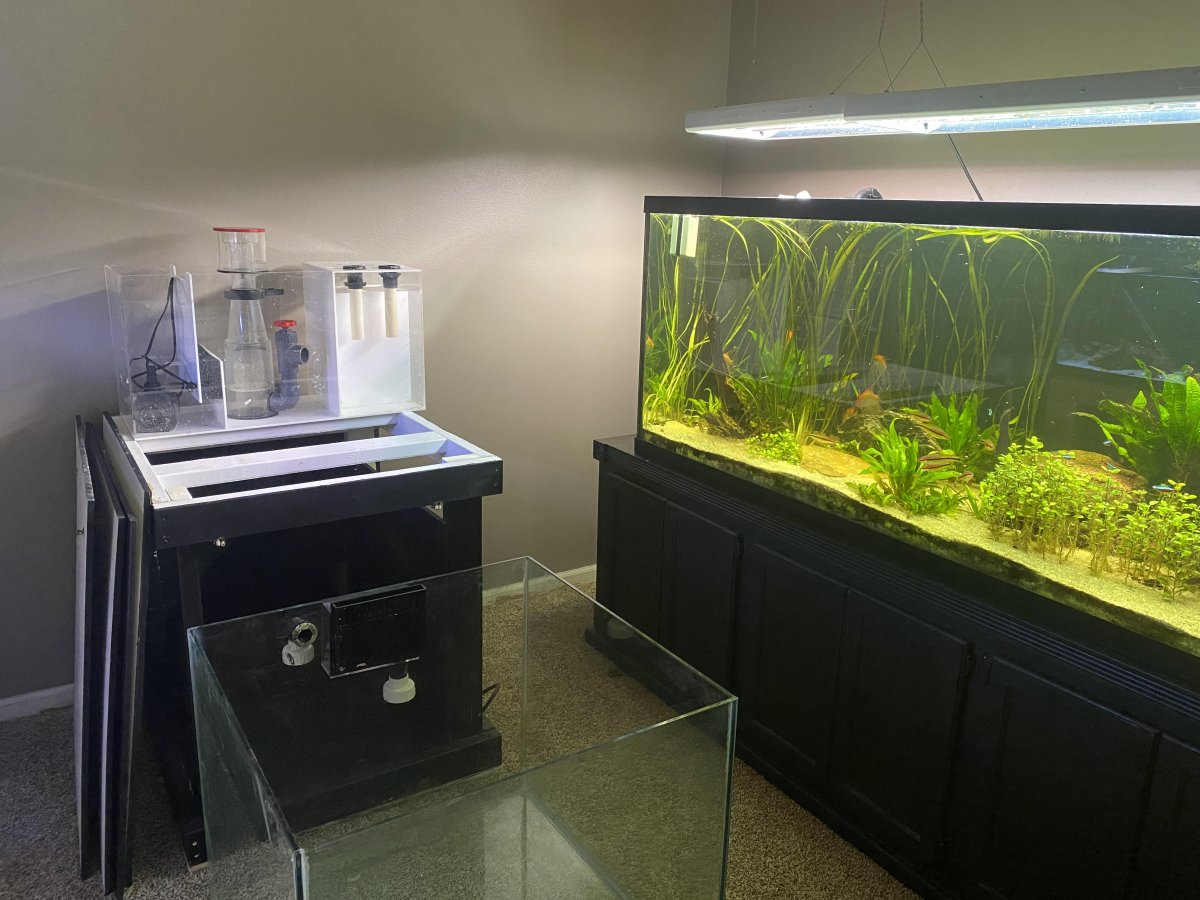 That's my journey so far. Looking forward to sharing it with you all and documenting it.

Off to a good start!
OP

Pulled my rock out of its bleach cure today. It was in for a week at a 20:1 water:bleach ratio. I got it all out and power washed the rock. I will let it dry for a few days to let the bleach gas off. I'm not too concerned. It will be a few weeks before the rock goes into water so it should be totally safe by then.

I was horrified by the infestation of bristle worms however. I don't think anything could have prepared me for the volume of bristle worms in the bottom of the brute and in the rock. Power washing it made short work of the ones in the rock. Im a little worried about the possible volume of dead worms inside the rock however. If anyone has any thoughts on this please share.

I have a lot more rock then I will need. I'm going to build a negative space structure I think. This should give me a good selection of rock to use for it. 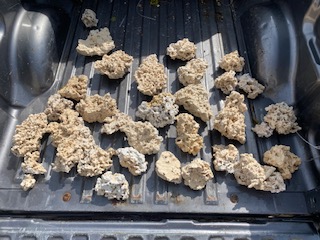 Thanks for posting this. Helpful info on treating rock.
OP

Figured I would post a current equipment list. Things may change before I set it up. This is just the equipment I already have and will possibly make some changes over time. My main focus on this build is to set it up right and make life for my future self easier not harder.

Been spending my weekends working on the rebuild. Last weekend I rebuilt the stand. Had a few issues I had to address with it. Also repainted it. I still need to skin the outside but that can wait. I also dry fit all the plumbing. Should be able to get it finished today. 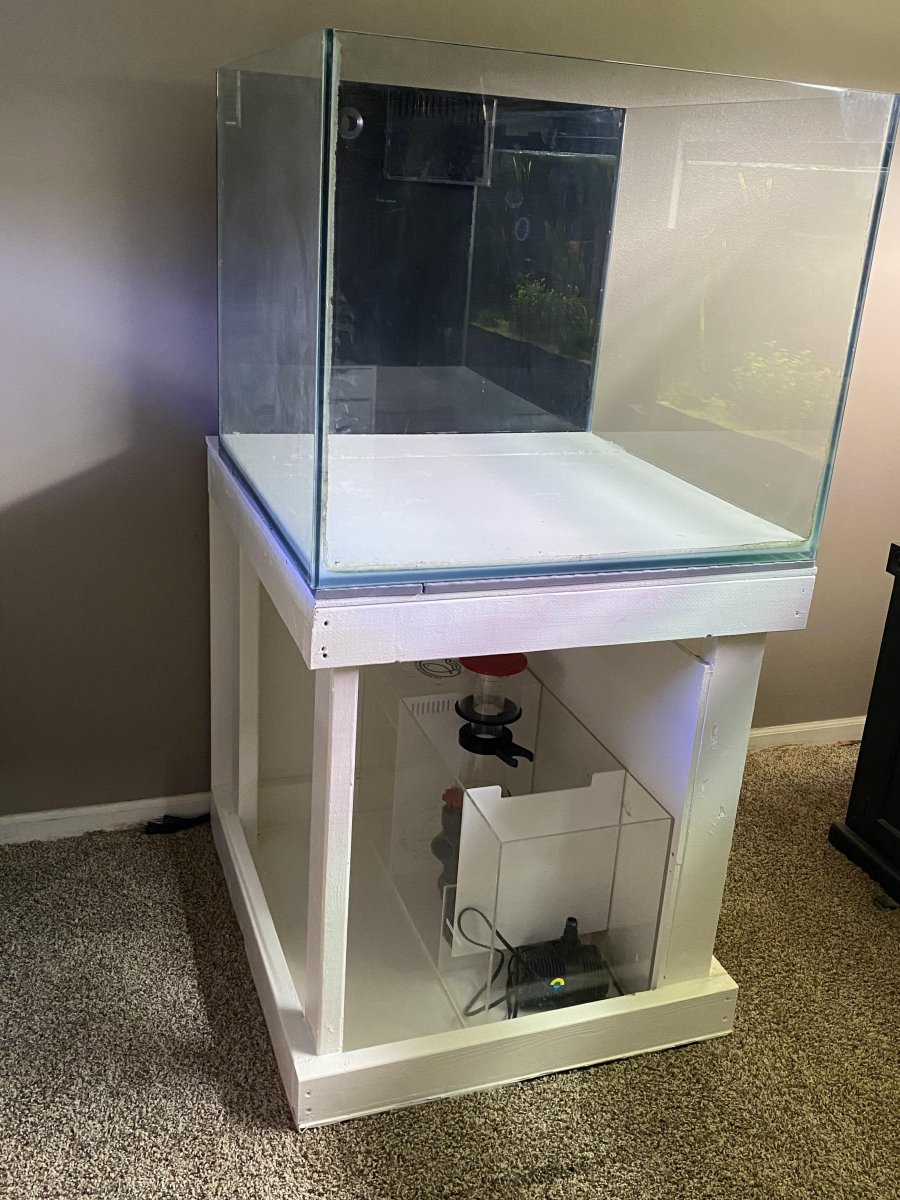 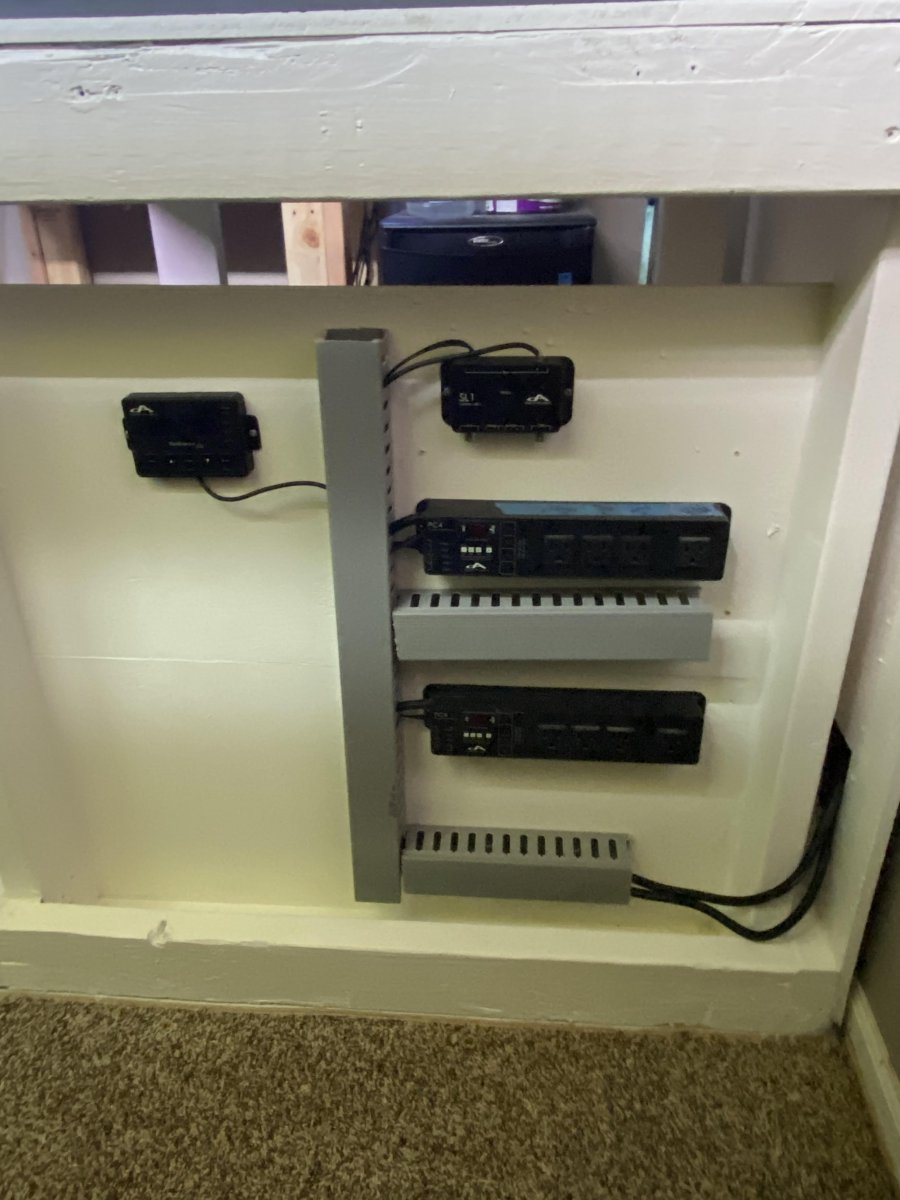 This week I worked on the negative space scape. It was my first attempt at it but I actually really like it. Let me know what you think. There will be sand but Its Ocean direct so I wont add it till I have water in the tank. 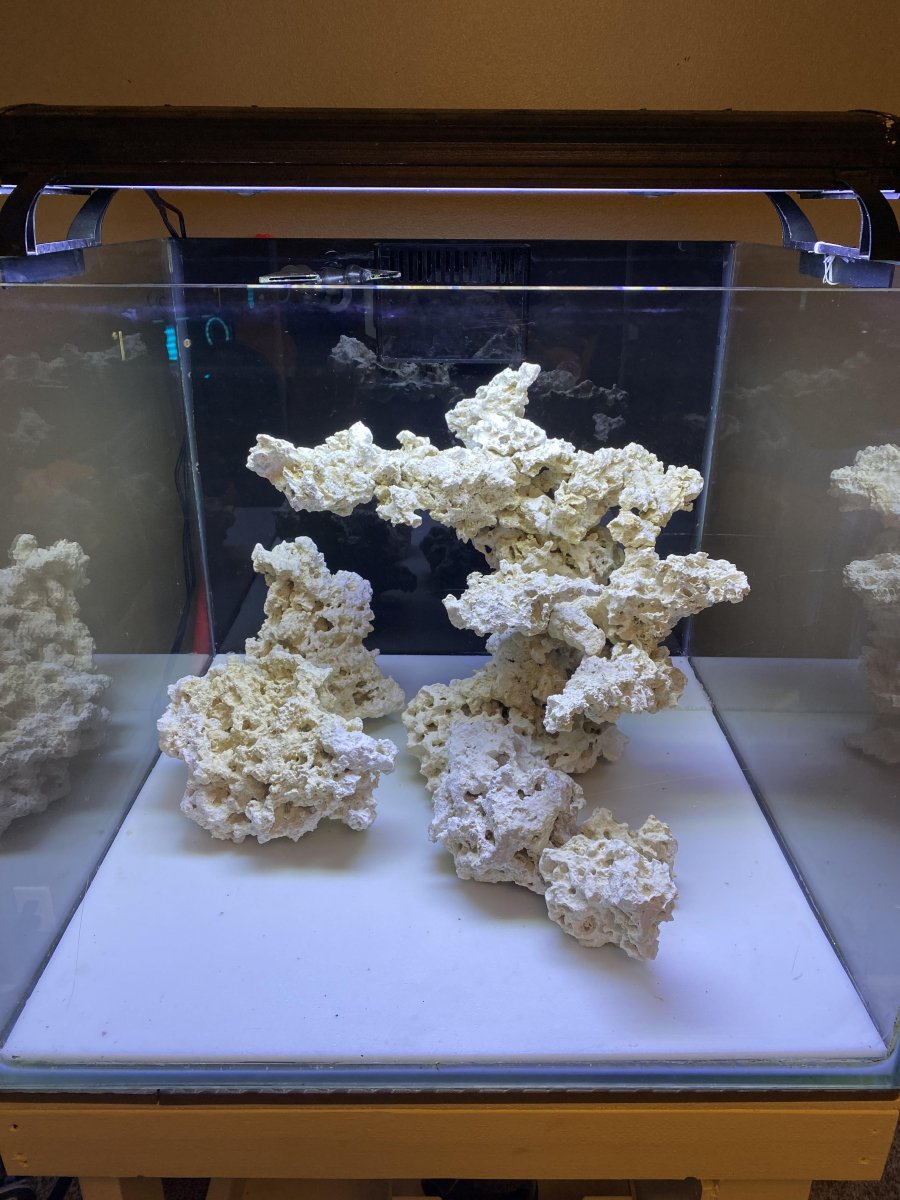 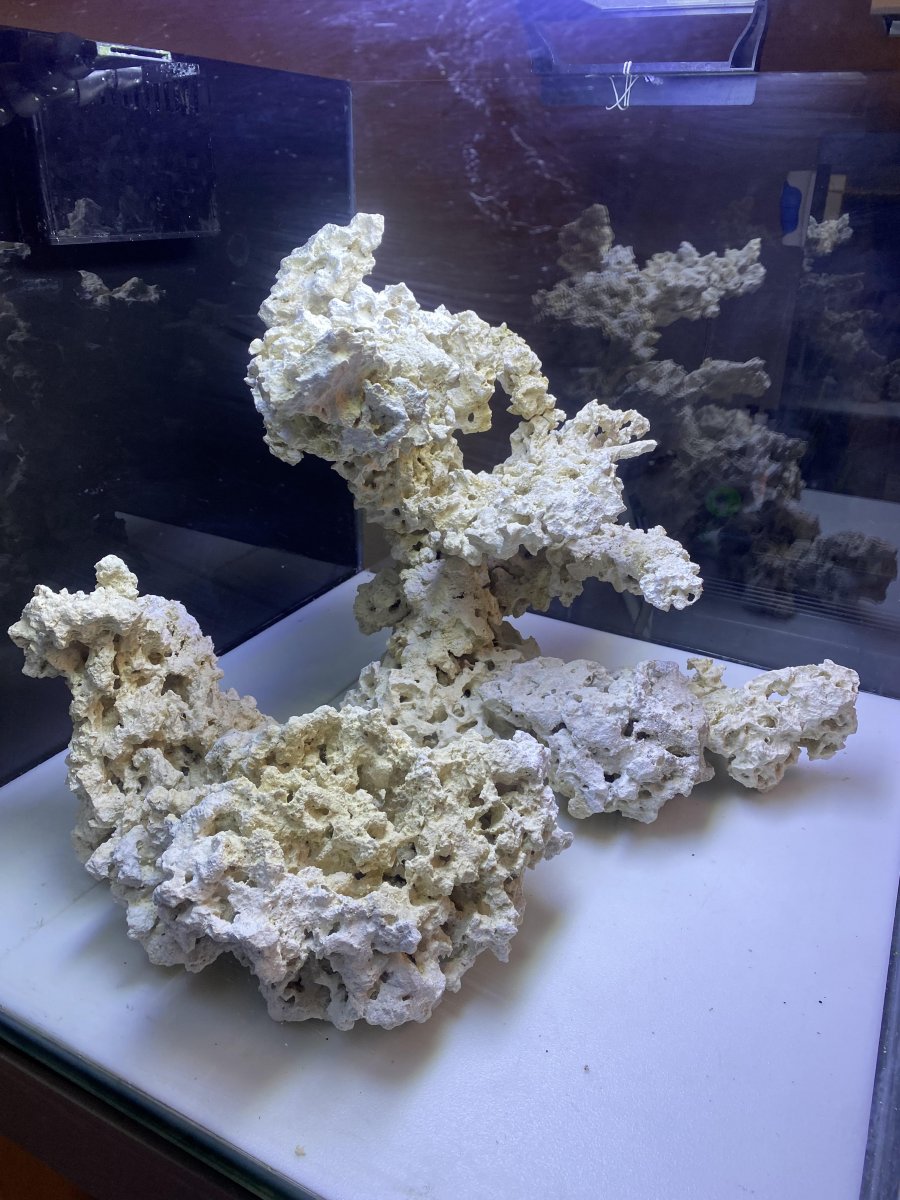 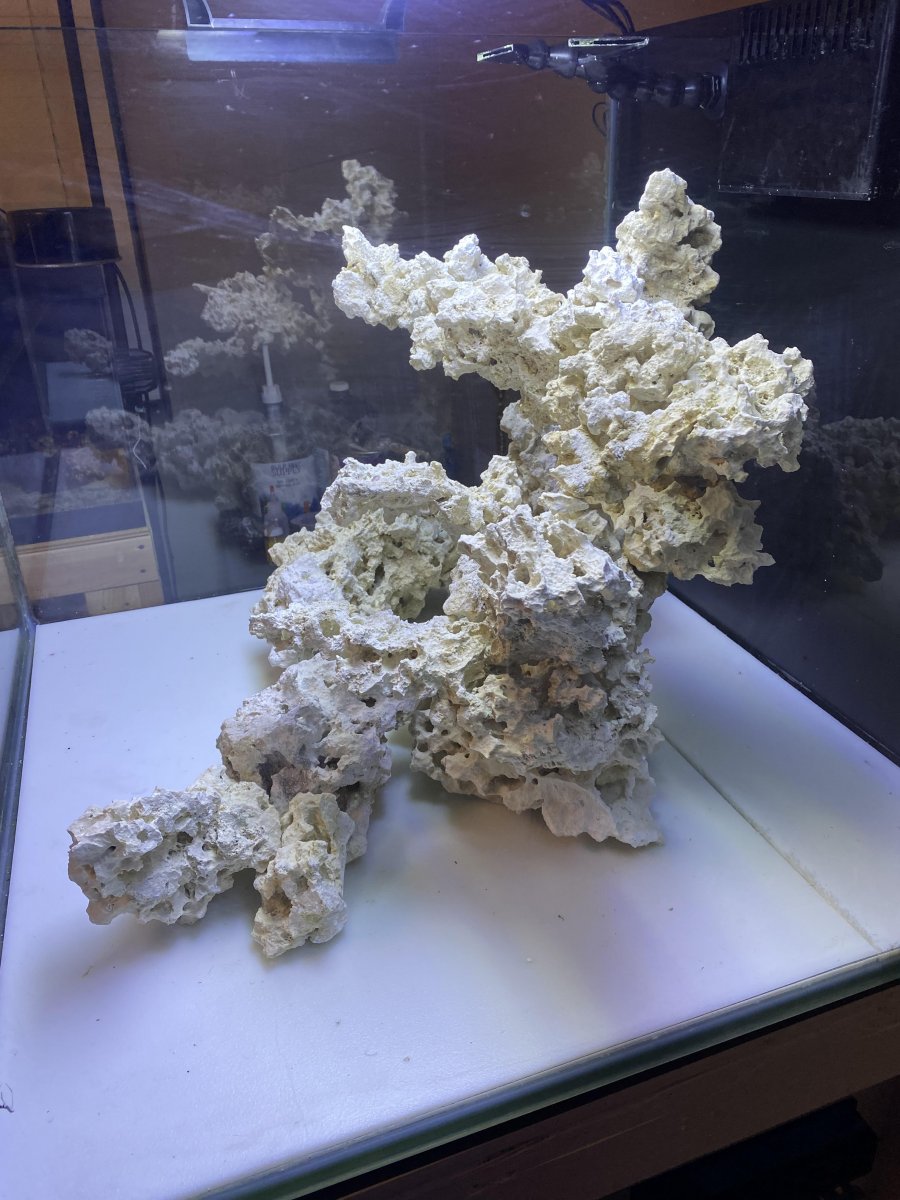 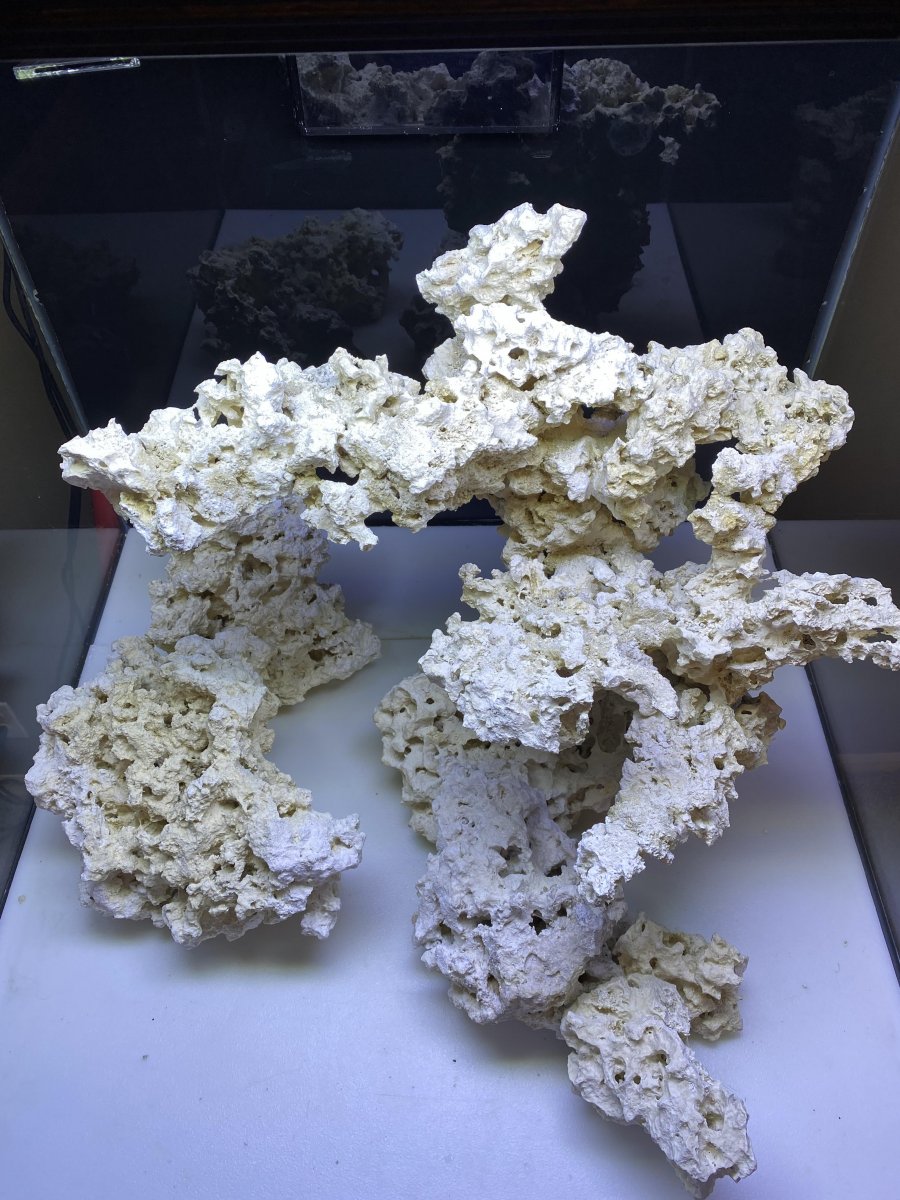 Finished getting all the plumbing together. Filled it up for a leak test. No leaks in sight!

Going to empty it and fill it with saltwater now. Lets get the long road of cycling underway. Not overly excited about this part but it must be done and done right.

I am excited to see if Ocean Direct sand has any benefit to the cycle process. I got a few products Im going to add to the tank to see how it helps. I got the brightwell MicroBacter7 and a bottle of pink and purple coraline algae from BRS. Try to promote as much bio diversity I can. I will not be adding any live rock to the aquarium. Hope to see some benefit from the "additives", sand, and then rely on coral brought into the system.
OP

Yesterday I got the tank filled up and salt added. This time around I am using high quality salt. I have always used instant ocean in the past. This time I am paying the little bit extra. Trying out Red Sea Salt. Not the Pro but just the standard. It is very close to the Calc/Mag/Alk I am going for an I hope it makes a difference.

Today I am going to add the sand. With it being Ocean Direct and being "Live" I wanted to give the salt 24hrs to mix and I wanted to let the water temp come up to 76/77
OP 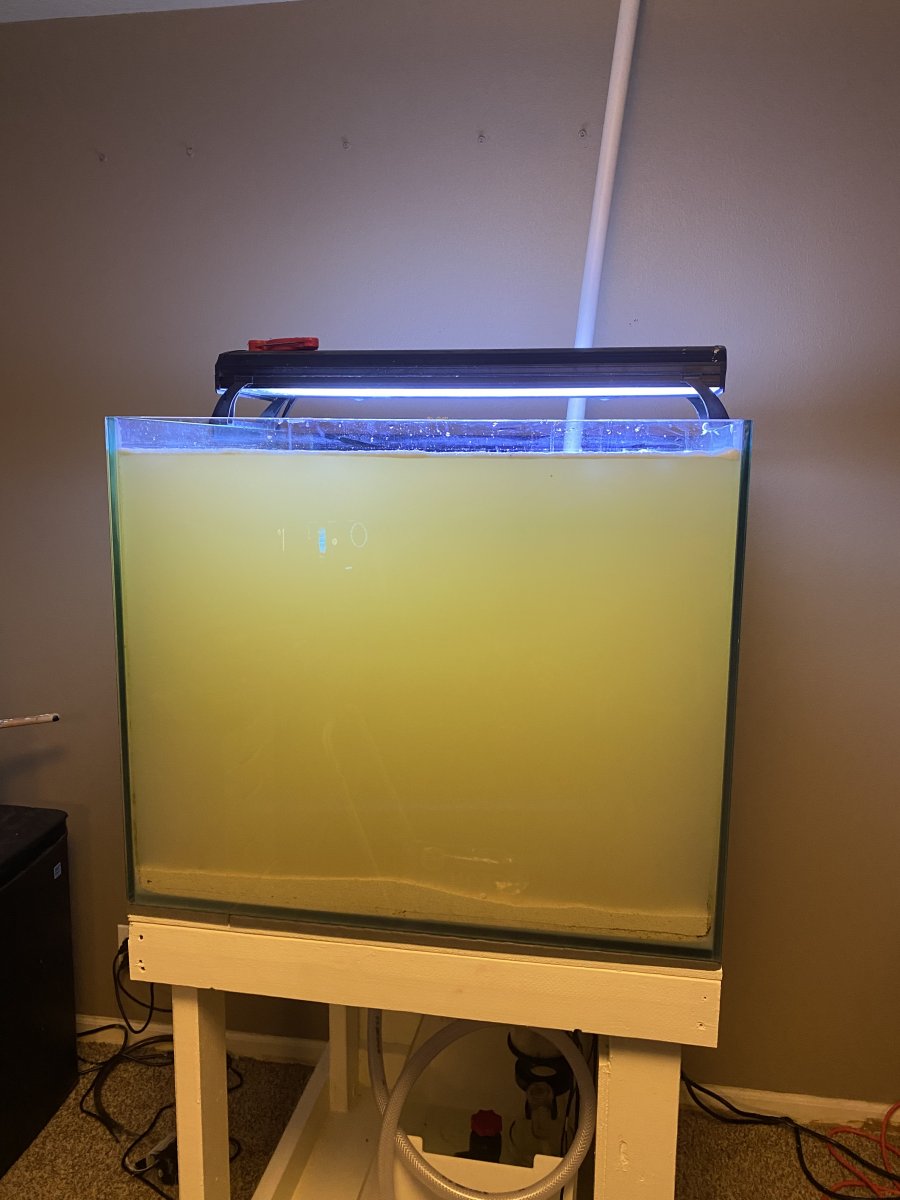 be warned. This is what the tank looks like if you add ocean direct to an aquarium. It’s been about 6 hours and there has been no change in clarity. That’s fine though. It will clear eventually.

few other things I did today was added led strips to the bottom of the stand. Iv always hated working in the dark under it. She’s bright now. 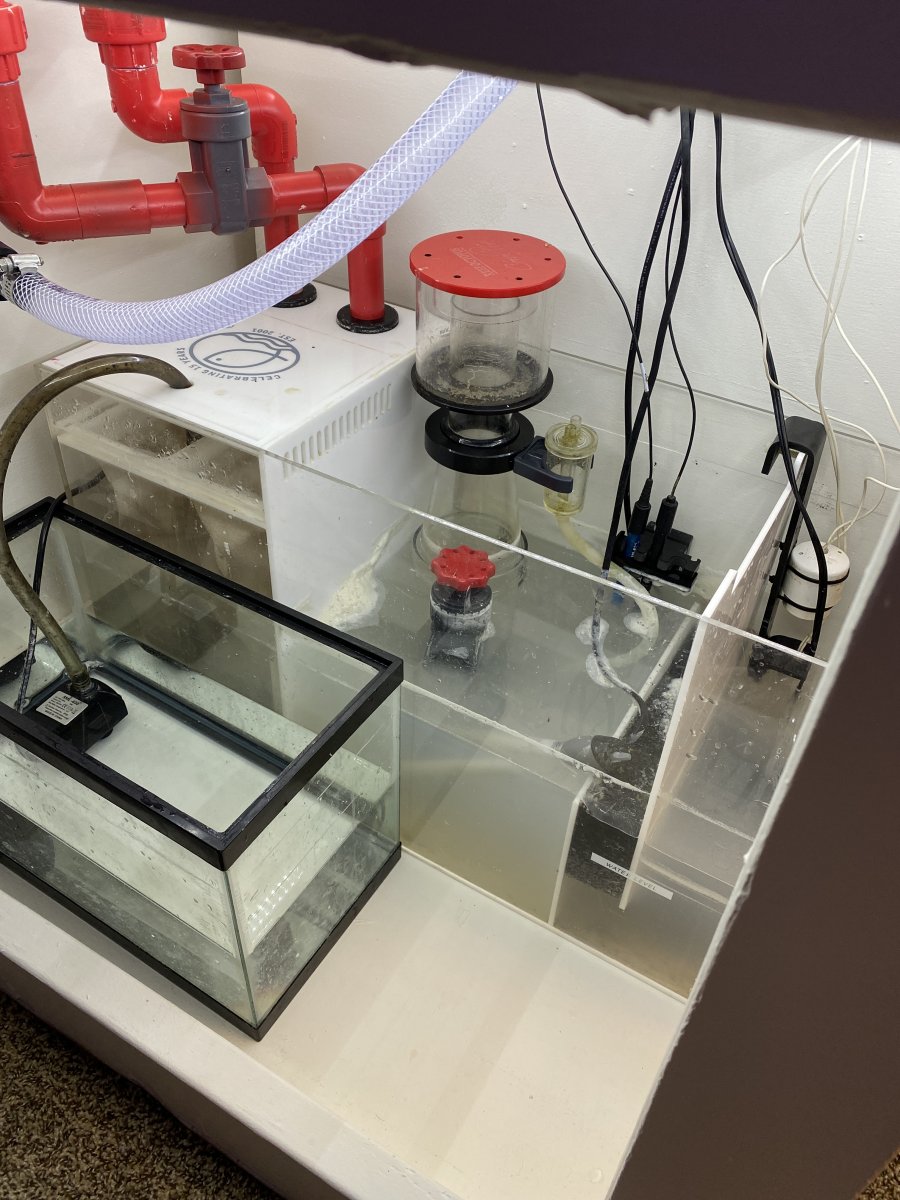 Added my first dose of brightwell microbacter7
i am very interested in seeing if the tank cycles any differently with the use of this and the ocean direct sand.

Just an update of the tank 30hrs after the sand was added. Still cloudy but it’s getting there 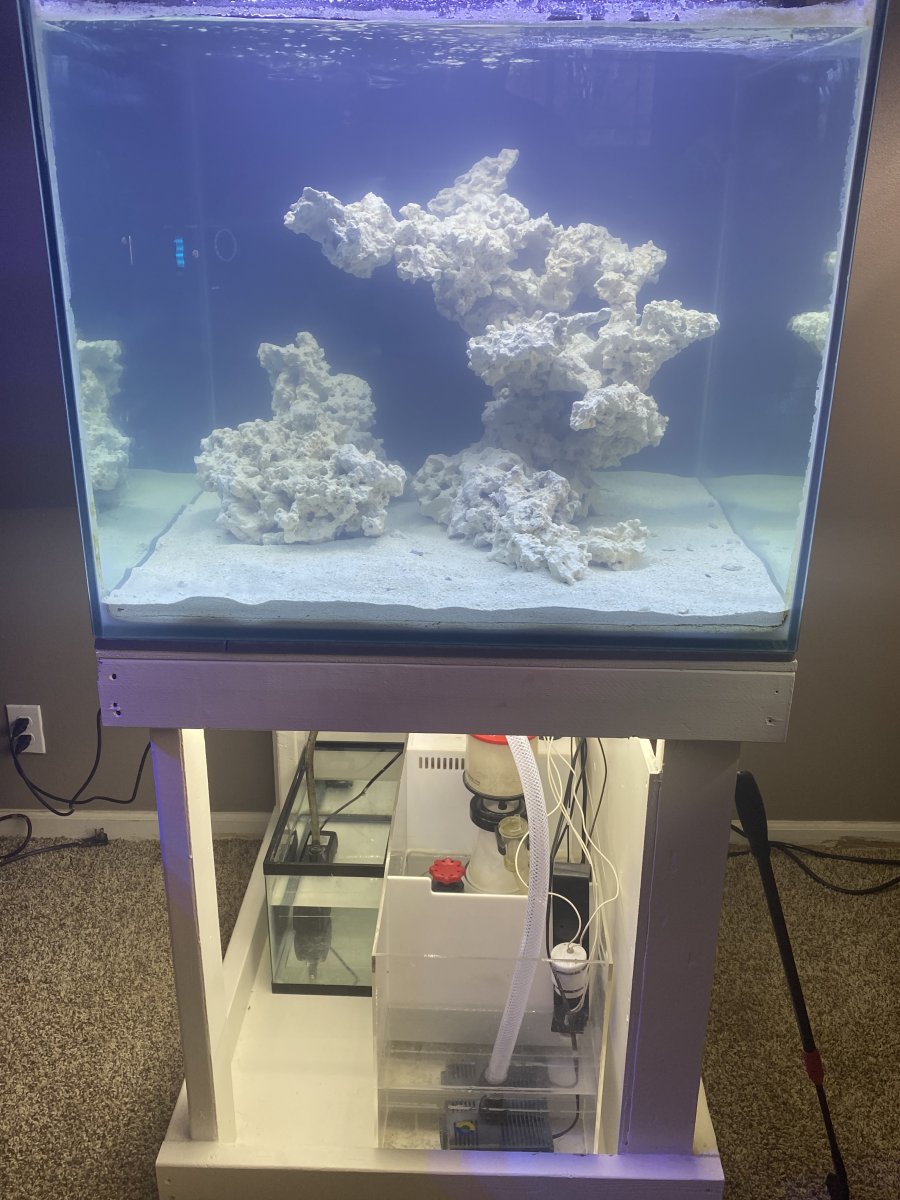 i would say she’s clear now 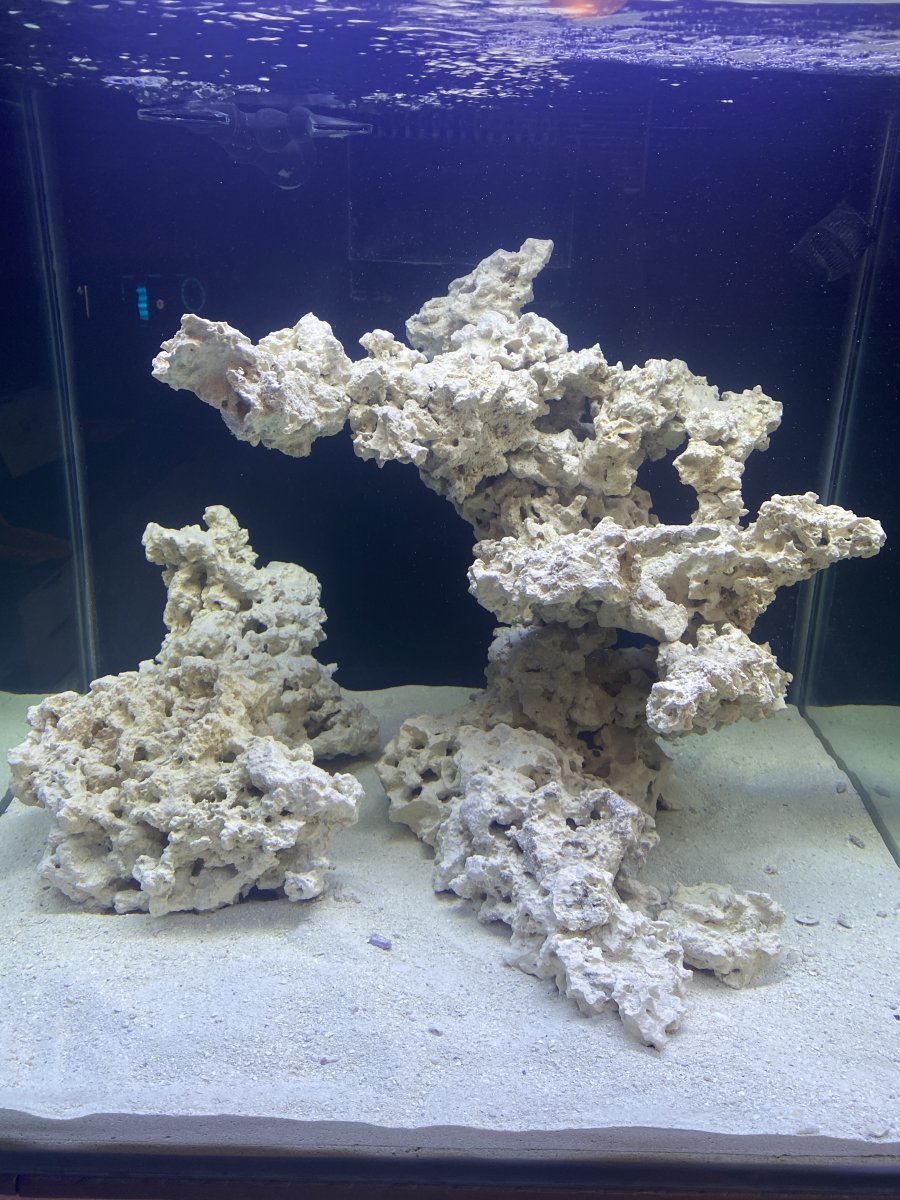 Also I did my first tests yesterday and got the following results. I found it strange that my Calc/Mag read so high. I haven't dosed anything and only used Red Sea salt. I also tested twice and got those results.

Bought the reef bright add on for the XR30. I was getting a lot of shadowing without it. Looks much better now with the additional fill light from the XHOs. It’s far more blue then any reef tank Iv had in the past. I’ll get use to it I’m sure. Outside of that I added all my corals. I keep seeing BRSTV talk about how we should put all our corals in during the cycle to help move it along. So figured I would give it a try. I only have a few zoas and some soft corals. I bet they will be just fine.

for the corals I ended up removing them all from the rocks or frag plugs I had them on and put them onto new bits of dry rock I had left over. I like the look of this much better then a frag plug (always hated them)

Pictures obviously came out terrible but you can see a difference. Its a much bigger difference in person. 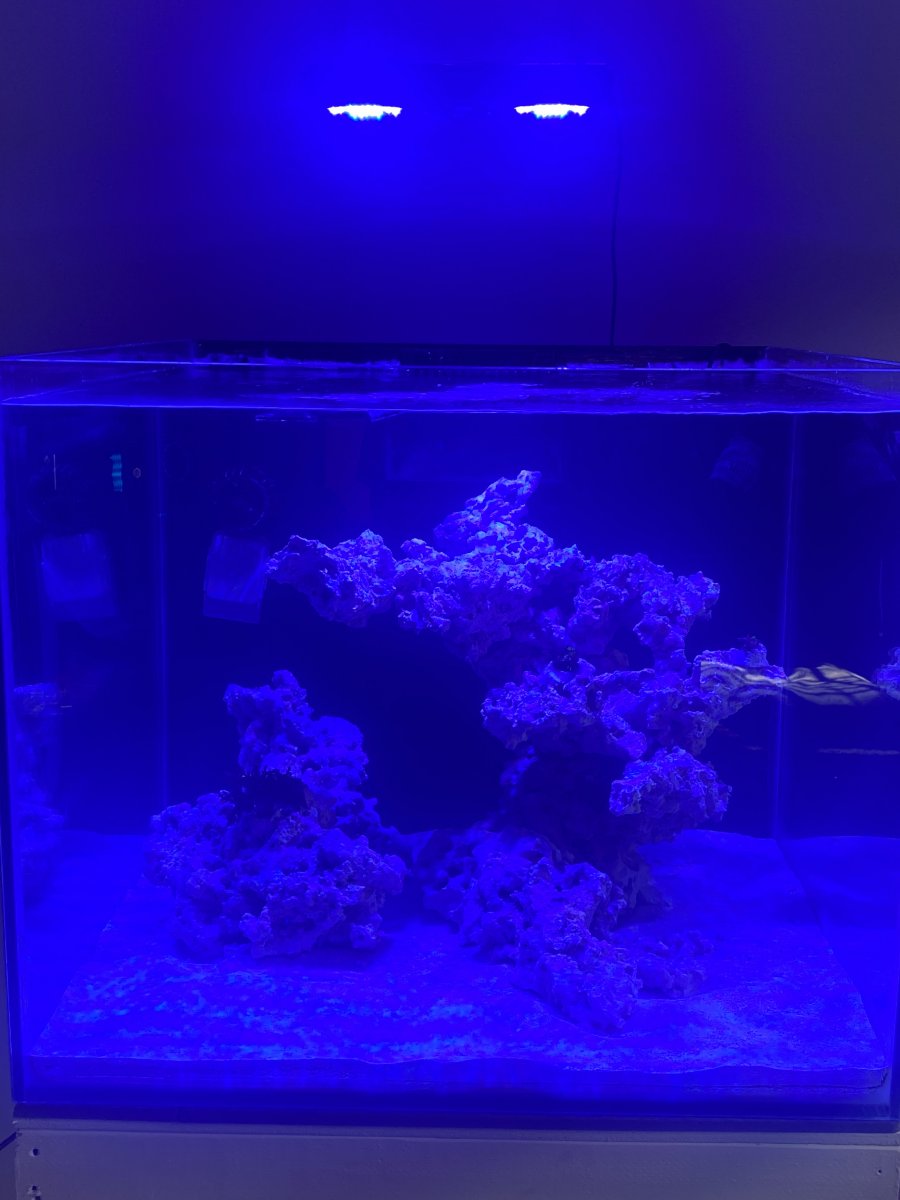 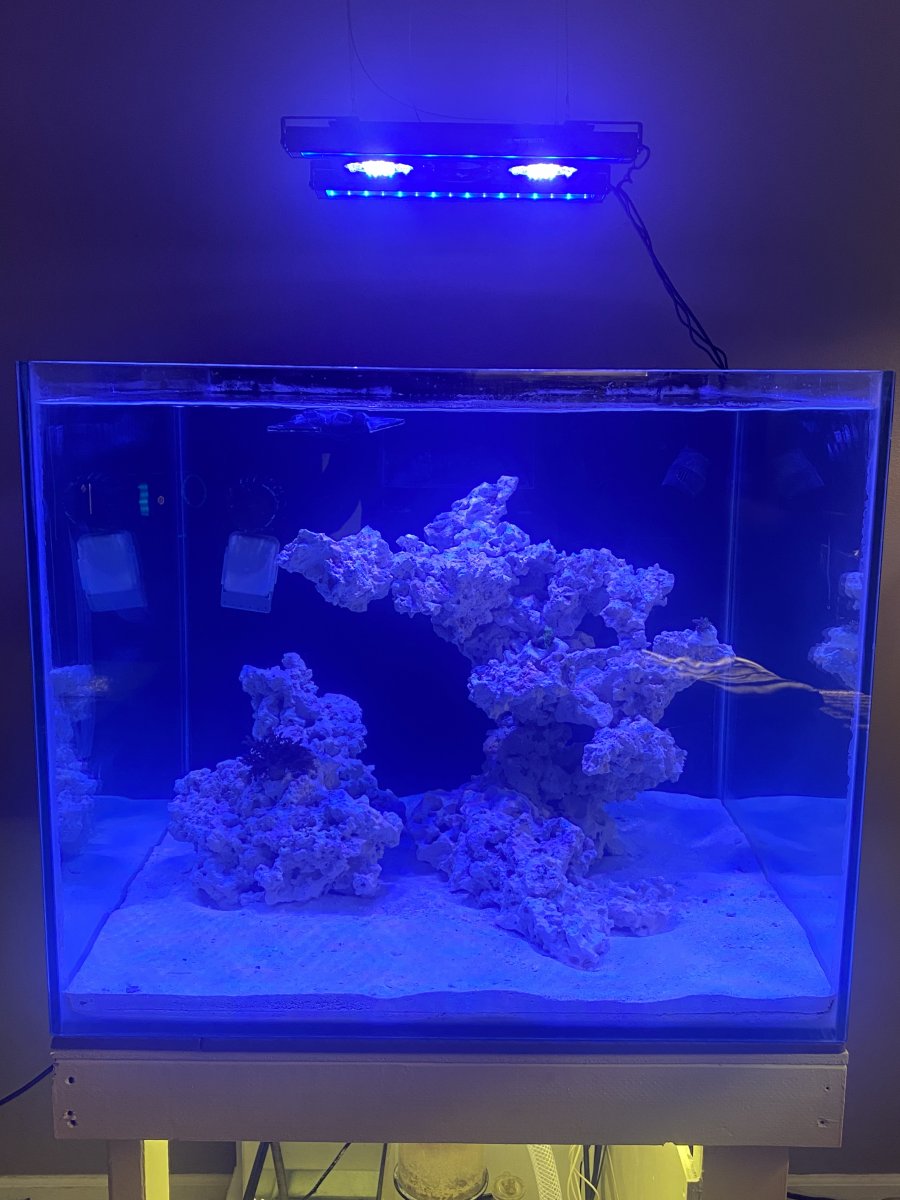 Today marks the day my tank is officially cycled. Dosed the tank last night with ammonia and it is all gone today.