Ok here's the install plan for my new diy large co2 scrubber. Redline is air out from skimmer. Yellow is air into the skimmer. The purple dot is my ozone t connection. Opinions Or suggestions? Selniod is ordered. I'm picking up a backup reactor today from a friend if this diy does not pan out 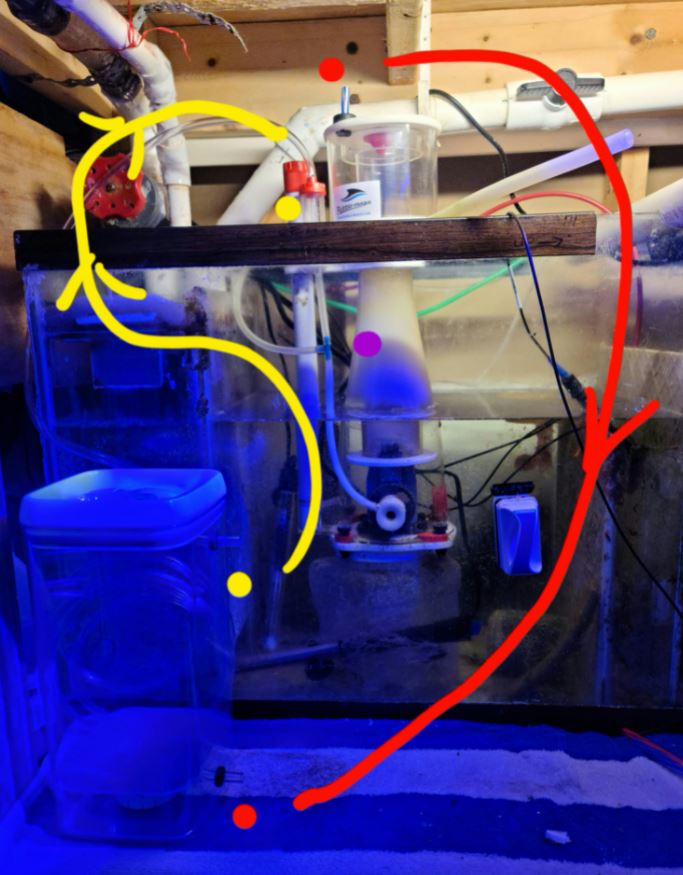 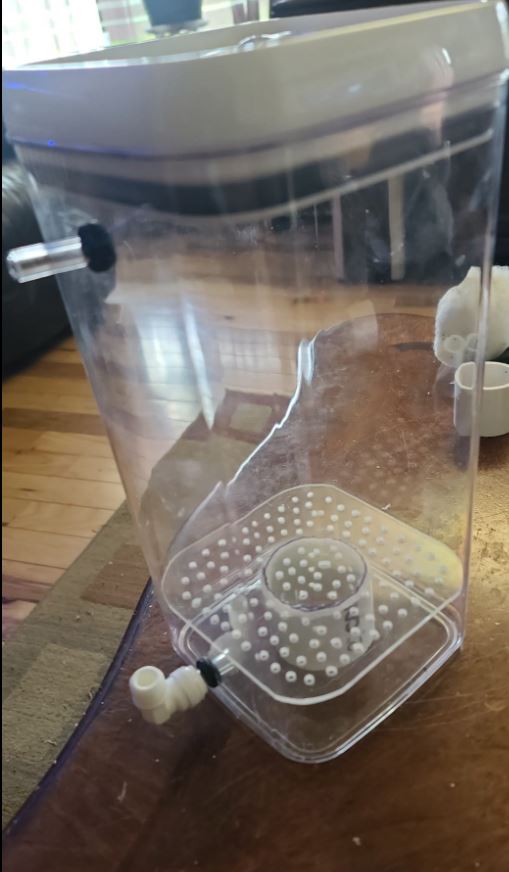 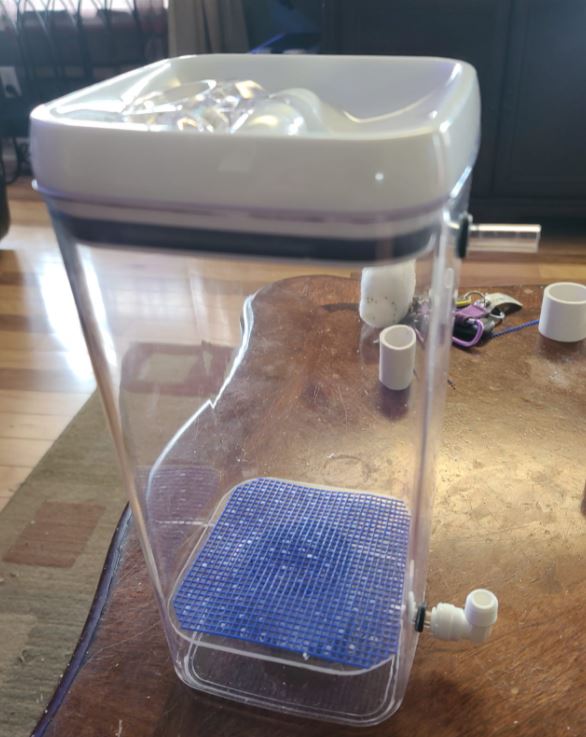 I do not know what effect that ozone has on co2 absorbing media. Something to consider.
May want to hit up our chemistry guru, @Randy Holmes-Farley
OP

ok so after one week of running here is what I have discovered. the star on the graph is when the reactor went online.

1. I installed the scrubber in a recirculation style. air puling from the skimmer cup, then entering scrubber, then back to the skimmer. The idea was to save media and get the same ph increase effect.

2 The ph has raised a very small amount. but did rise. nothing like some other threads I have read about. some claim to have gone from 7.9 to 8.5 after installing a scrubber overnight, so I'm a bit bummed and curious about the small increase I got.

3. I did remove the DIY scrubber and replace it with a real reactor (my BACKUP PLAN) but the results are still the same so there was no (massive jump) difference in ph increase between my DIY reactor and a store-bought reactor.

I believe next week I will pull air from the outside and see if there is a difference between running this scrubber in a recirculation air setup vs pulling outside air. so shout out to those that said these are useless, it appears you may not be wrong. the score is 0 its great to1 its not. hahaha but my testing is not done.
Last edited: Aug 29, 2021

What are your other parameters? Alk? Ca? When was the last time you calibrated your pH probe? Stick with it the way you have it plumbed now as a recirculating scrubber.

Can’t Remember What I Did Before Reefing?

Does your skimmer have air holes in the lid and if so, have you covered them up?

I did the same thing you did as far as recirculating scrubber. I added the valve (normally closed) and programmed on my Apex to open which grabs outside air if my Ph goes above 8.3. Well that never happened. I did see a gain but never 8.3 consistently. Overall I am happy since I did see and increase just not as much as I thought. To save on media I just leave the valve open (on) which grabs fresh air from a 3/4 pvc pipe with a few elbows. Come winter I may have to close the valve and utilize the scrubber. Right now my PH is 8.1-8.2 during day and 8.0 at night
OP

and i calibrated my ph probe on 8-15 and do so every two months. i did plug the air holes in my skimmer cup. with small square pieces of plex and silicone in place

I have read that water-soaked media can affect media and its function to properly perform. so I have modified the setup to include a condensation cup.
because the skimmer did overflow once after i installed this... so now I have fresh dry media in the scrubber. I may revert back to recirculating, but I want to see if there is a difference between fresh air and recirculated air on ph. because improved ph is what I am after. also i will be cleaning up the tubing once i deside on which way I want to go. the scrubber holds 5lbs of media. lol one thing i can say i hve noticed is the rltionship change between alk and the ph once the reactor went online. 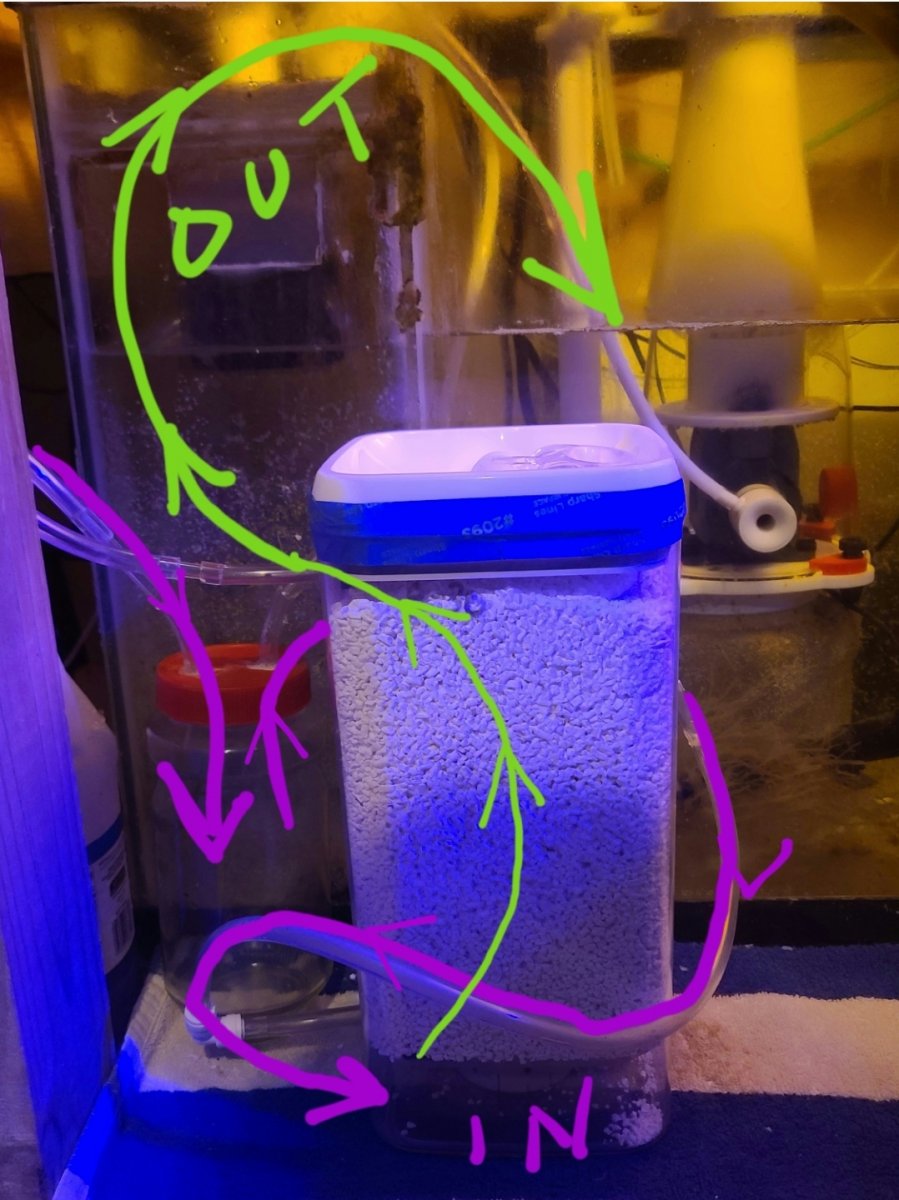 PeterC99 said:
Does your skimmer have air holes in the lid and if so, have you covered them up?
Click to expand...

I never knew you were supposed to do this…
D

Adamantium said:
I never knew you were supposed to do this…
Click to expand...

Yes and depending on skimmer you can get plugs from fishofhex.com

Delloman said:
Yes and depending on skimmer you can get plugs from fishofhex.com
Click to expand...

Hahaha I’ve been running a CO2 scrubber for ~8 months and I had no idea. Let’s see what this does
D

If your scrubber is not recirculating don't close them if it is then your media will last much longer as I am using a half in solinoid valve to add fresh air if ph gets to high in the 3 days I have ran it this has not happened I live in GA where the outside air is hot or cold most of the year has high pollen the rest of the year. My skimmer is a reef octo and it has 2 in puts on the silencer so I just have the loop on one hole and the solinoid on the other. Controlled by the apex ph probe.

I used to run a CO2 scrubber. I was facing low pH. High of 7.8 and low of7.6 at night. Added the CO2 and got a low of 7.9 and high of 8.1. I only run the CO2 during spring and summer months when the air is still. Fall and winter time the pH ranger between 7.9 and 8.1. I know it sounds strange but I have older windows in my house and winter and fall months there is always a good breeze.
OP

I would like to update yall. Since this post started. Well, i have become very well educated on ph. First I'm no expert. But I do like to educate myself. That being said.. one major cause of a low ph is High levels of co2 in one's tank.. and yes there are many items and methods that reduce these levels. None of those have worked for me so far, But in order to solve ph problems, one must know how to combat it.

Co2 enter our tanks in many ways and if you find that the fan or co2 scrubber or opening windows etc. still do not help you, then listen up. Hahaha. I tried all of these and other methods

Here is what I believe is the best approach for me... calcium hydroxide. Aka kalkwasser. The short version is this. We can not keep co2 out of our tanks, so why not use it..When calcium hydroxide (kalkwasswer) enters your tank a chemical dance takes place. The corals use the calcium ion. And the co2 ions in your tank bond with the hydroxide ions an creates bicarbonate or carbonate aka (ALK). NOTE THIS IS NOT A SOLUTION FOR LOW ALK OR CA PROBLEMS.

I have removed my scrubber fans and closed the windows. now Im running kalkwasser. Kalk itself is high in ph 12+ so caution and alot of research should be done BEFORE implanting it. Hopefully this chemical dance will use up the excess co2 an level them out in my tank an thereby raise my ph. I have just started my kalkwasser drip so I will keep everyone update. Again I'm NO EXSPERT and like I said this is the short version. Im Just a hobbiest that has done my fair share of research. An if you are an exspert then feel free to add to this or correct it. With helpful info an not tails of woooo. Just read up on kalkwasser, because done incorrectly will KILL EVERYTHING IN YOUR TANK.

This info may help you out, but do your own research first. Thanks to those that have pointed me in the right direction
Last edited: Sep 20, 2021

Recirculating co2-scrubber and ozone in skimmer?