Copperband Butterflyfish - A beautiful but hard to keep species.

Chelmon rostratus, one of the most iconic reef fish but one of the worst to attempt. If this wasn’t one of the first “unusual” fish to catch your eye then I’ll be surprised as many people will walk into an LFS for the first time and there will usually be one, two or in some cases four of this species. Now, you may be wondering why I’m mentioning this fish as many of you on here already know this species and even own one. Well, recently I have seen a lot more people getting interested in owning a species. Often, the people who become interested in this species will be told about how hard they are and turn away. I’m hoping this will stop most of that and show people how you can have an increased chance of success with this fish. The reason why I want to try this is the curiosity this fish has is endless, constantly turning upside down to look in nooks and crannies in the rock work. While this is supposed to be aimed around Chelmon rostratus, I will quickly mention the two alternatives to this species. One of which gets quite a bit larger more regularly. The two alternatives are Chelmon muelleri, to my understanding this one is rarer in the hobby but also looks browner, and Chelmon marginalis, this one will get larger more often though so will eventually need a larger tank, this species also lacks the middle band and often the false eyespot. Now that that is sorted, let’s get into it.

Personally, I wouldn’t buy a Copperband Butterflyfish (Often shortened to CBB) online. The reason as to why is simple, to reduce shipping stress to a minimum. Obviously, you cannot reduce shipping stress altogether as there will be some stress from an LFS to your tank. Another big reason as to why it’s better to get one in the LFS and not Online is feeding, which we’ll get onto soon. Another good reason as to why you should get this fish from an LFS as opposed to Online is you can see the state it’s in before you get it. We’ll dive in deeper with the issues they tend to come in with later.


This fish is commonly bought not just for its beautiful colours but also with the thought it will help eliminate Aiptasia. Now, while yes you will most often hear about CBBs that have eliminated or put Aiptasia down to a minimum many will fail to do this job. Due to this, these fish should not be brought with the expectation of it eating aiptasia and instead leave that job for species like Chaetodon kleinii, Lystmata wurdemanni. Among the family Chaetodontidae the CBB is neither easy but also isn’t among the extreme level of many corallivorous species. Another thing I’ll mention quickly is whilst many places say this species can get to 8 inches, it will take many years and quite often won’t occur. At first when you get a healthy specimen this fish will be rather shy and reclusive but over time, they will become rather tame and quite often one of the more boisterous fish.

Let’s start with what issues are often seen with a new CBB.

The first issue you will come across with this fish is the Bacterial and Protozoan infections. To avoid this, look for any red markings on the fish, this will often look like rashes. Any sign of a small white spot in the fish is also a bad sign, often resulting in brook, ich or velvet. Another thing to avoid is any sign of finrot, this could be torn fins or an outline of white. Other signs of an unhealthy fish is if it scratches on the rocks or decorations in the holding tank - this often is another sign of a protozoan parasite. Another sign of disease in this fish is if the gills seem irritated, in the worst cases (and this can go for any fish) they will stay at the surface with their mouth wide open as they are unable to breathe properly. Unfortunately I don't have any photos of disease in this fish currently so I can't show you what most of it would look like.
Here's a CBB with Lymphocystis on it's lower jaw;

Once you get past the disease part, the struggle still continues. I don't know about you but I would say the disease part is only about 25% of the issue with these fish, a good 65% of the issue with these fish comes in at this point. Many of you will understand what I mean but if you don't then now's the feeding part. I find a lot of the time these fish don't eat due to quarantine (I know it sounds ridiculous, just let me explain). The reason as to why I think this is a lot of the time I have seen this species not do well, they went through quarantine. Now, I don't hold anything against quarantining and think its a great idea but with this specific species I think we should avoid it altogether as they don't take too well to many treatments. I'd recommend having a well seeded observation tank filled with plenty of microfauna such as Aiptasia (I'll get back to this point), Copepods, Amphipods, Phytoplankton, Zooplankton ect...
I'd also recommend having many different foods on hand, such as Live blackworms, live brine shrimp, live mysis shrimp, frozen mysis, frozen brine, Clam/mussle on a half shell and possibly more. A good thing about starting this fish off in observation isn't only so they can be brought onto a varied diet but also you can test them out with certain coral that they will and wont peck at. Now, why did I mention the Aiptasia when not all of them will eat it? Well, Aiptasia is how I got my guy to eat. You may be wondering how, well first what I did was observe him in my 4' main display tank (It was well seeded and had some lovely aiptasia growing when the CBB went in). After observing him for a few weeks, I saw he was definitely pecking the aiptasia off the rockwork but he wasn't eating as ferociously as I would have wanted. I put the frozen food in the mouth of the anemones he pecked at and after a while he eventually ate more ferociously. Now mine is an absolute pig 2 years later. I will say this may not always work as I have only attempted this method once.

The final difficulty with Chelmon rostratus is getting it past the 6 month mark. Usually if you get it eating plenty, get it disease free and healthy you can get it past the 6 month mark. Very rarely will you lose one at 6 months if you have a healthy and eating specimen. Another thing about hardiness is supposedly ones from Malaysia and Australia are easier than ones from Indonesia, Singapore, and the Philippines. I'm not totally sure about that however there is bound to be some truth somewhere in it. If I remember correctly, some areas in Singapore, Indonesia and the Philippines are still using harmful toxins to get the fish to the ornamental hobby but soon killing them after (The name of it escapes me every time). Very rarely will a thriving CBB not pass 6 months, i'd say it'd probably only happen about 10% of the time from my experience.


I hope this helps someone and if I got anything incorrect feel free to correct me! The 65%, 25%, and 10% were all from my personal experience.

Heres a couple photos of my current CBB (They're all rather old as lights are off at the moment); 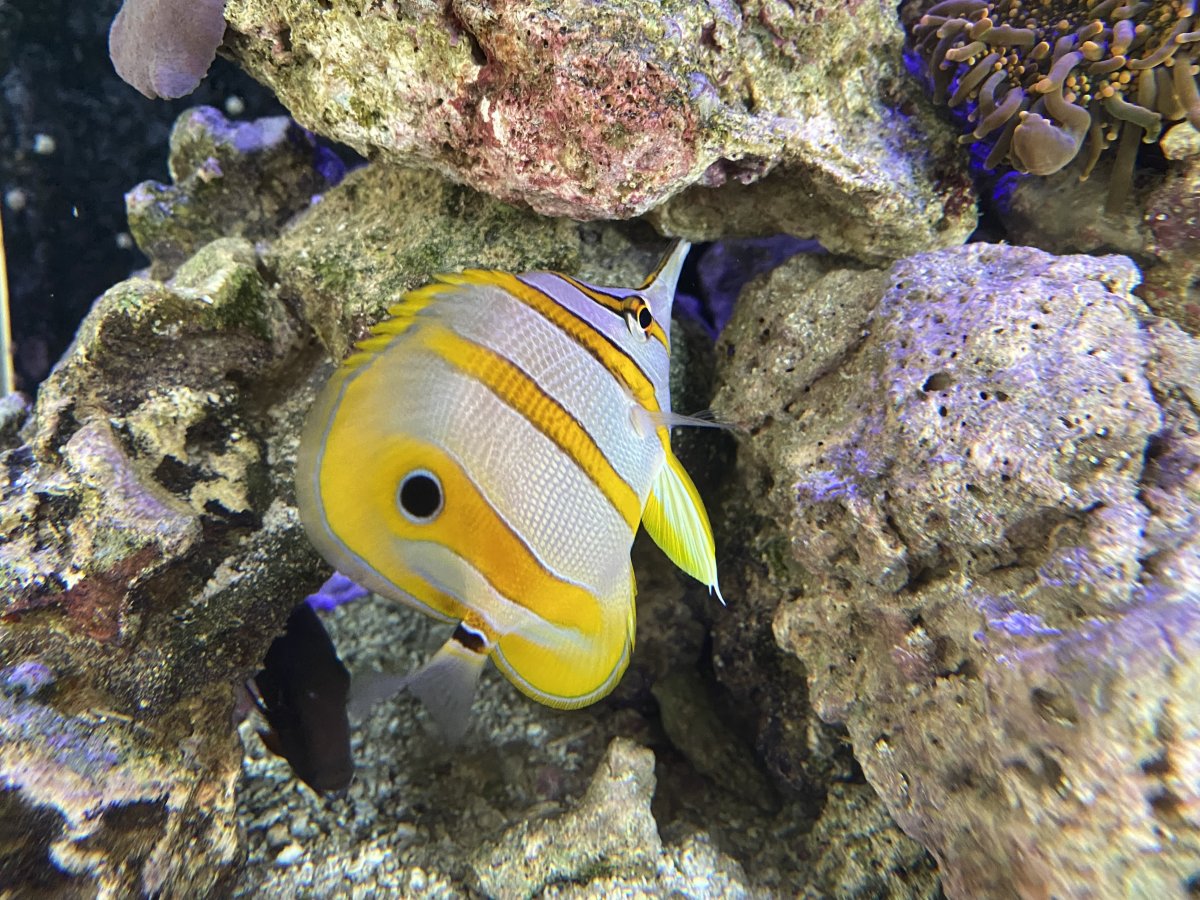 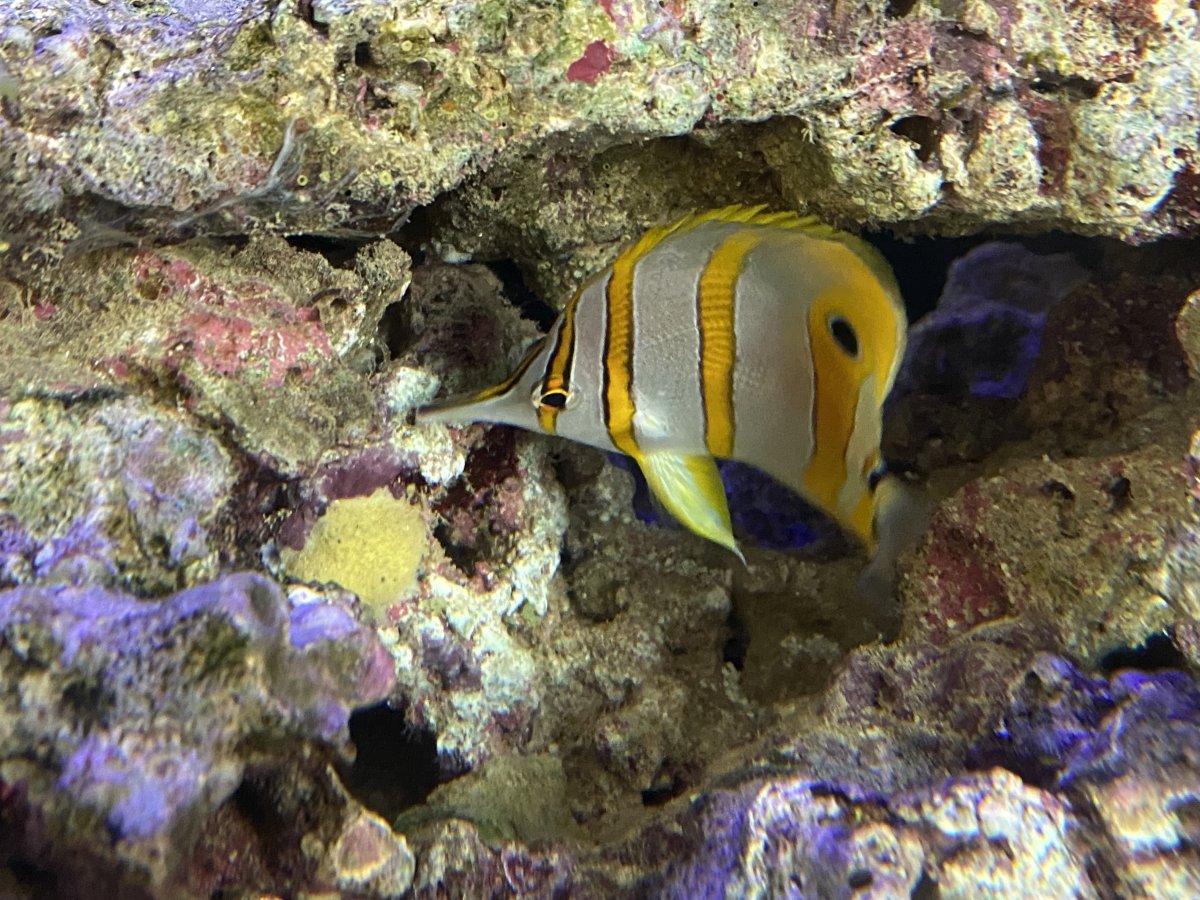 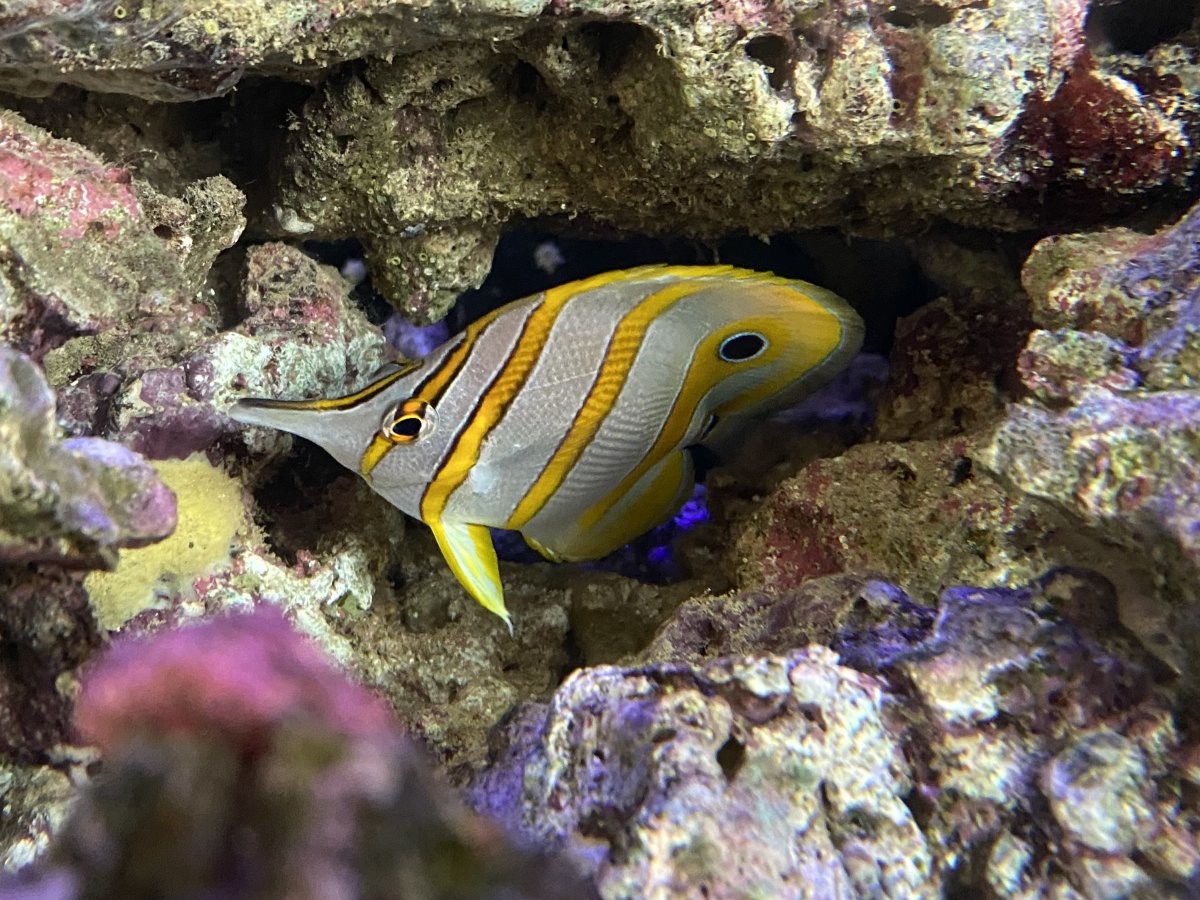 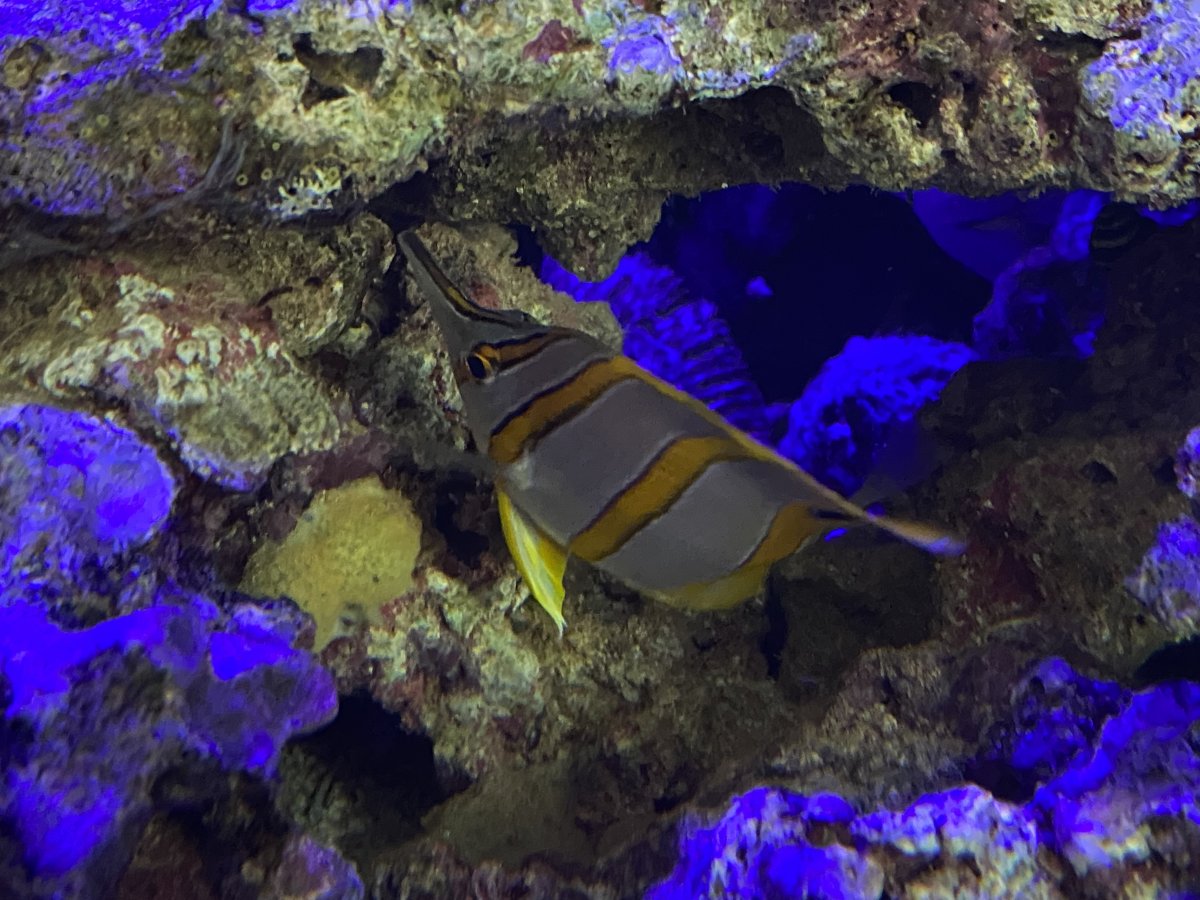 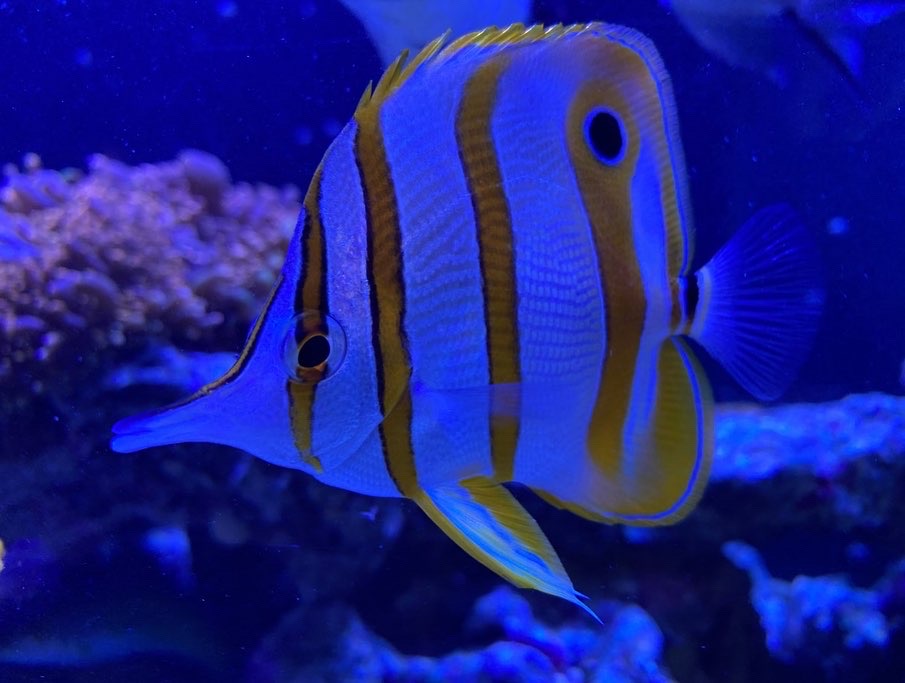 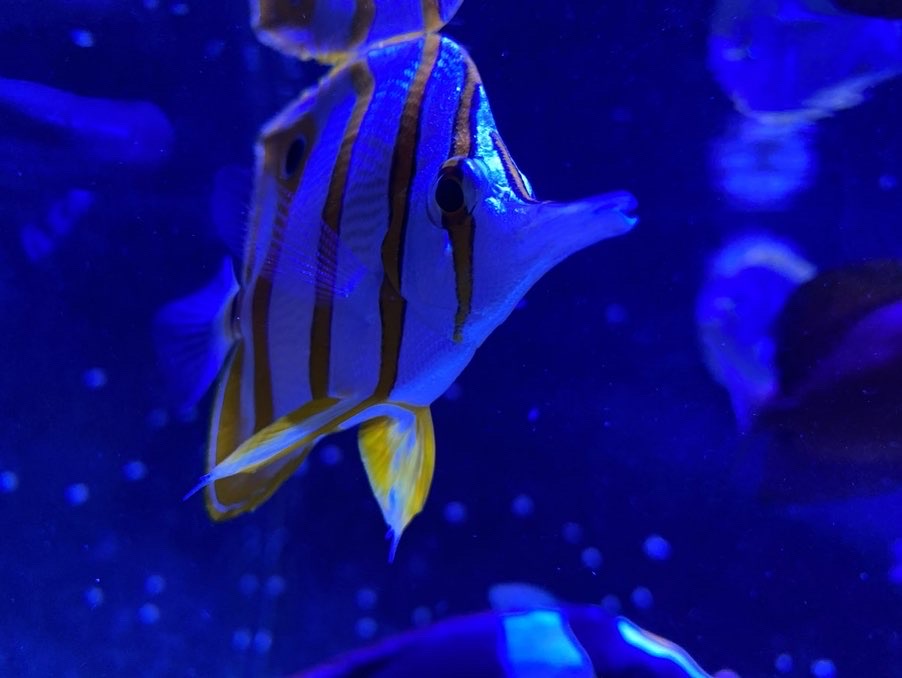 And some photos of when he first went in, this was around January 1st; 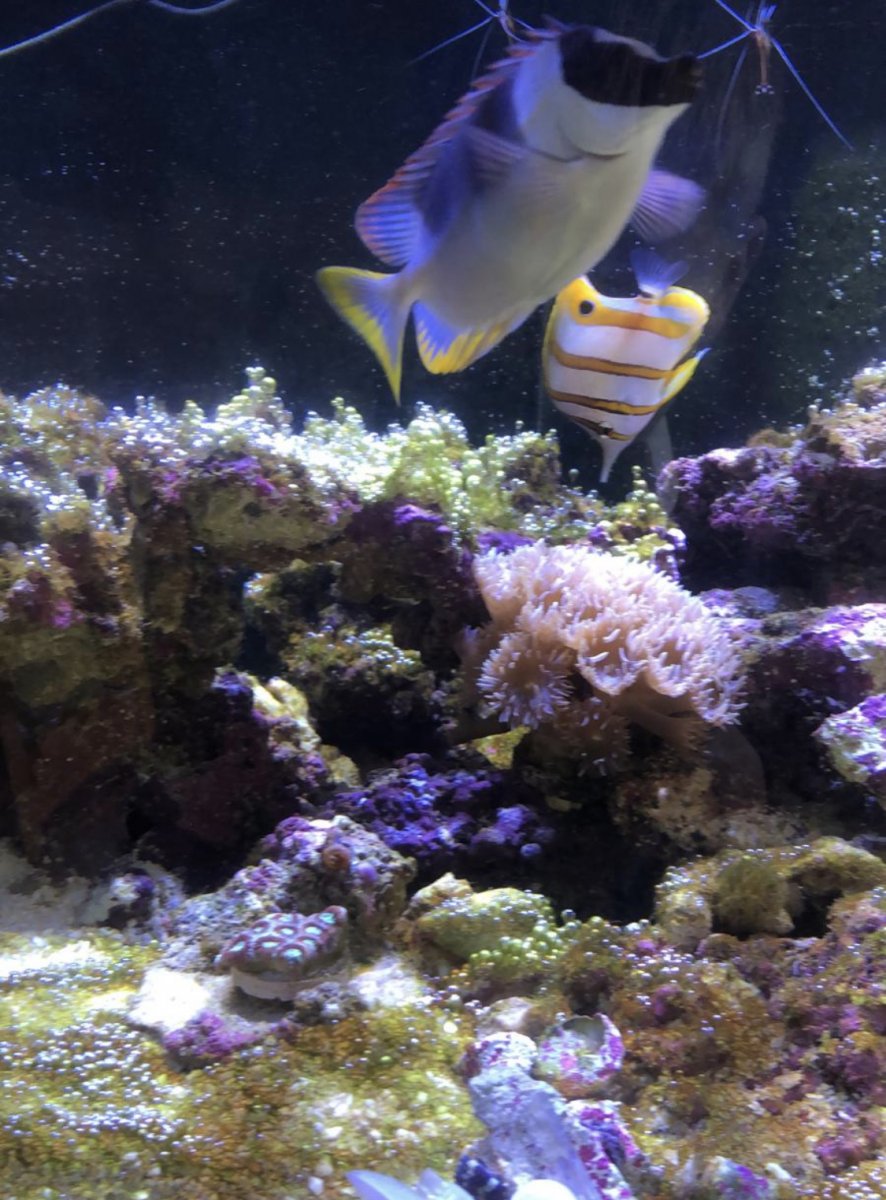 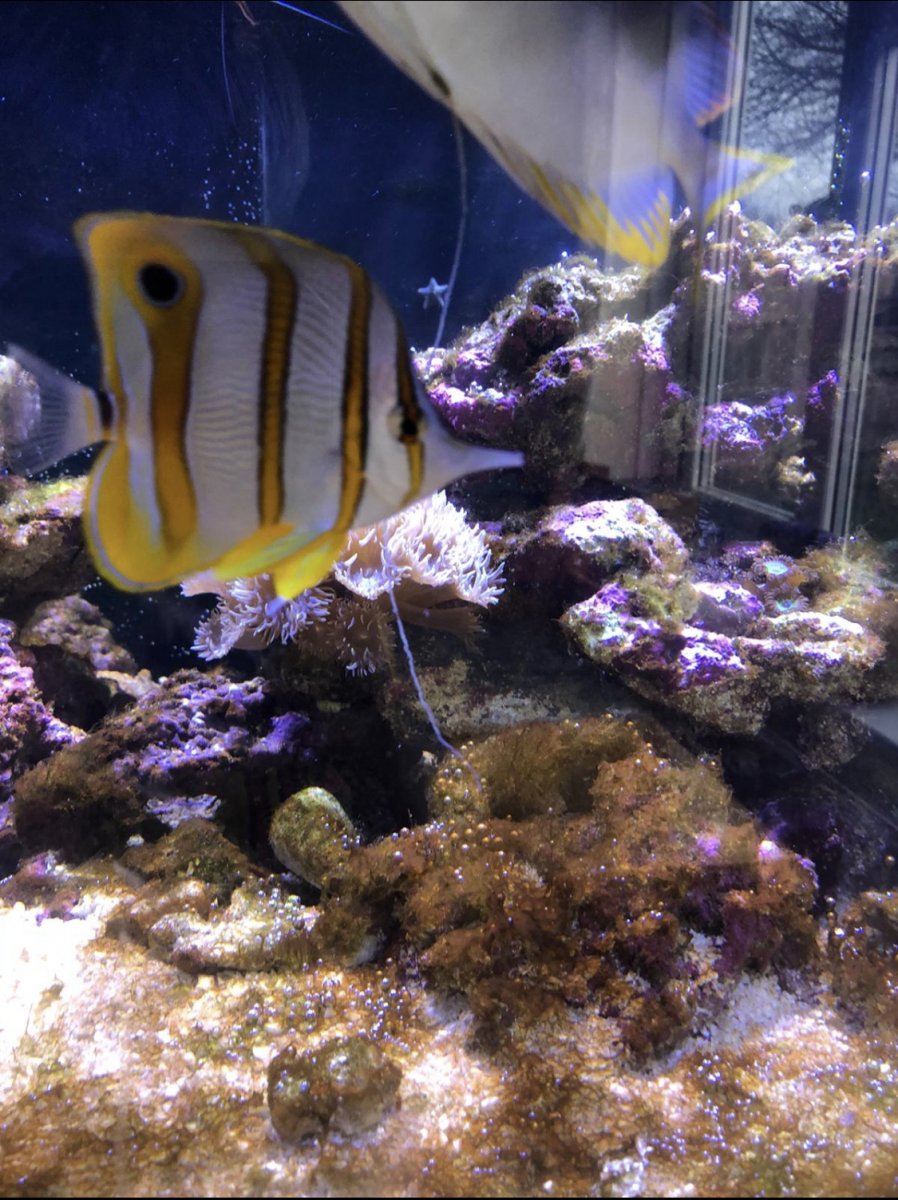 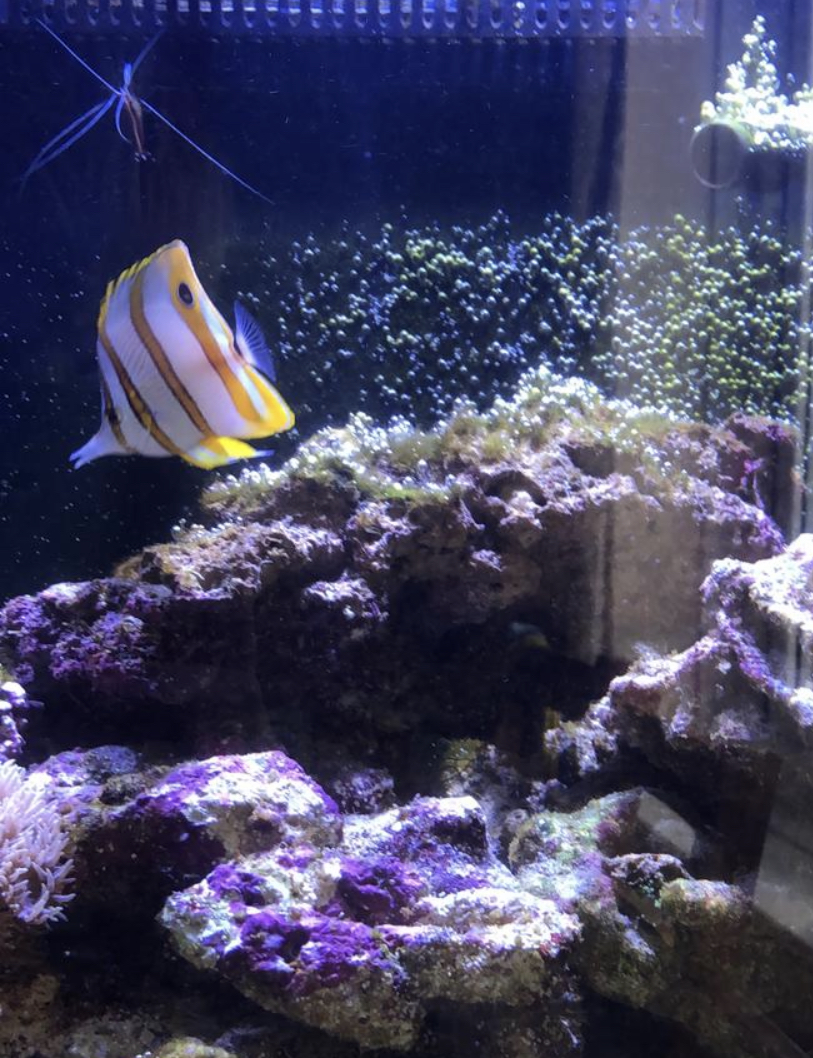 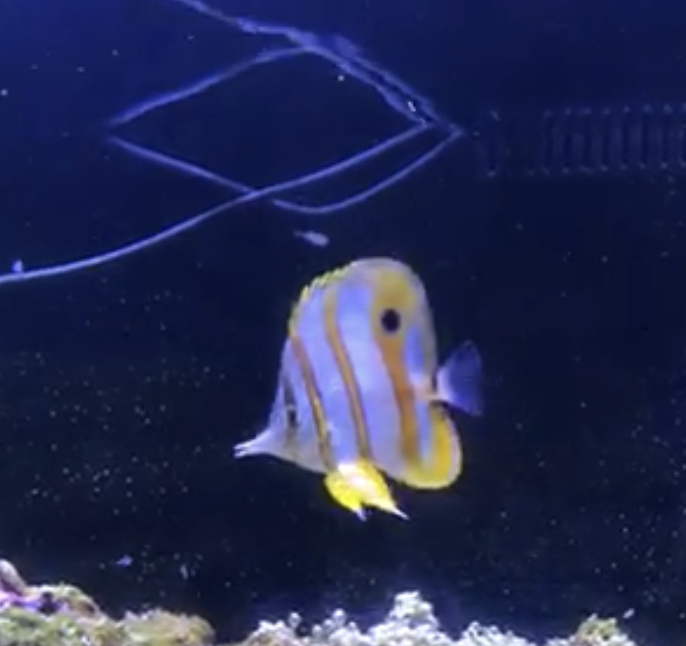 Excellent writeup! My LFS has a copperband that I'm eying and this helps greatly!
OP

blaxsun said:
Excellent writeup! My LFS has a copperband that I'm eying and this helps greatly!
Click to expand...

Thankyou! If you grab it, you wont regret it
It's a wonderful species if you know what you have to look out for.

i cant think said:
Thankyou! If you grab it, you wont regret it
It's a wonderful species if you know what you have to look out for.
Click to expand...

I'll have to double-check, but I this one is from the Indo-Pacific region.
OP

blaxsun said:
I'll have to double-check, but I this one is from the Indo-Pacific region.
Click to expand...

Theres a possibility of it being harder but I think my first CBB was Indonesian and he did great until a scopas tang had enough of him.

The Genus Halichoeres: The “Wrasses”
2

The Fairies of the Genus Cirrhilabrus