I recently set up a second tank because I finally was able to get a Mantis Shrimp that's not a peacock. (which is hard here in europe apparently!)
He is around 8cm, maybe a tad smaller and is missing one of his dactyl. It's color is a cyan to cream and the meral spot is seemingly either cream or feintly yellow.
I suspect it's of the genus Gonodactylaceus, because its tail looks very much like a g. falcatus/glabrous/ternatensis.
The seller informed me that they initially thought that it was a O. Scylarrus but it totally changed color after a molt according to them.
As mentioned before, my bet is on a G. Falcatus, or G. Glabrous but the meral spot is really very very faintly yellow even if that. It seems more white/cream, which would contradict the orange spots of the aforementioned species.

Help would be much appreciated, I've attached several pictures! 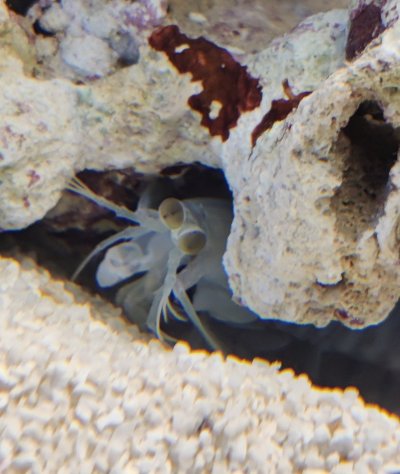 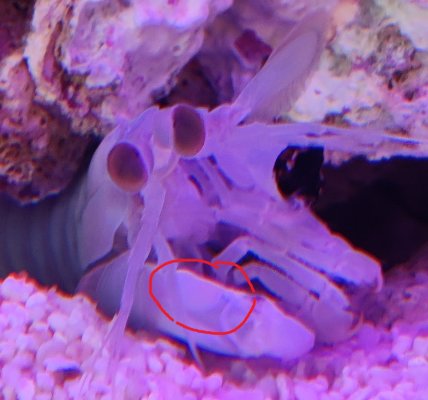 If you mean it's a Squilla Empusa, it's not, it's definitely a smasher, I've seen it hit rock/pumice I put in there. The telson also has a completely different shape

I think you have a very unusual G. falcatus color morph. But it is definitely not G.glabrous. Do you know where it came from? Indonesia? Philippines?
OP

nmotz said:
I think you have a very unusual G. falcatus color morph. But it is definitely not G.glabrous. Do you know where it came from? Indonesia? Philippines?
Click to expand...

Hi, I sadly don't have an origin region, but I kind of suspect it to be a G.Ternatensis, since I've seen a blue colormorph on the internet named "Chuck" where he also lacks the distinct orange/yellow meral spot, so it might be related that they have weaker color intensity on the merals when their body is pale/blueish. Tho that is prolly not exclusively the case with g. Ternatensis only.


I've been feeding it a small piece of enriched shrimp every day for the past week and the meral spot has slowly gotten a bit more yellow. He further has refused food since 2 days ago, so he hopefully will molt soon!

Have you ever been punched?

A few weeks in, I'm already starting to regret getting a mantis shrimp
5 6 7 8 9

Is my mantis shrimp preparing to molt?