I'm new to the salty side and haven't had a FW aquarium in over 20 years. In my quest to learn this hobby and the science end of things with so many different ways of doing the same thing I was honestly really confused by all the different information everyone was "recommending". However last night I really feel like the light bulb turned on and I'm better understanding this tank cycle process but I also am not naive to think I fully understand everything 100% yet.

Things that confused me in the start....

- Dr Tims Ammonium Chloride... It won't register on an API test kit after adding it to your aquarium like adding Ace Hardware ammonia will. I never knew if what I was adding was the right amount to get to 2-3ppm. It was guess work on my part and not seeing my test kit "work" made me doubt my test kit as well as the Dr Tims product.

- Dr Tims one and only... The directions on the bottle say to keep it refrigerated which I was assuming was to keep the bacteria alive. I was not able to purchase locally so I ordered from Amazon. My bottle shipped for 7 days non-refrigerated in the summer from California to Pennsylvania. I also don't know if it was refrigerated prior to that so I didn't trust that it helped and seeded the bacteria I was looking for.

- with doubting both dr Tims products, I opted to use shrimp to start my cycle AND introduce bacteria to the tank. I kept the shrimp in the tank for two full weeks and 95% decayed until I pulled it out a day ago. I liked the shrimp method because I could see the results on my test kit and follow the cycle along its journey as well as know that the shrimp was adding the bacteria I wanted.

I agree at this point my cycle is not 100% complete and I definitely want to build up my bioload more prior to introducing anything to the tank. I do however understand now better the difference between using a shrimp and using Ace Hardware ammonia + a bacterial source. I agree that the Ace Hardware ammonia is easily a more controlled approach regarding controlling the dose of ammonia in relation to the amount of water in the tank itself. Since I have removed the shrimp I will be moving to using the Ace Hardware to dose to 2ppm until the ammonia and nitrites reach zero in a 24 hour period.

My dilemma I face is coralline ... I want to seed my display now so I went to That Pet Place yesterday seeking a piece of live rock with some on that I could scrape at home to introduce... To my surprise they don't have any live rock with coralline in their tanks. The only option I had was hermit crabs with coralline covered shells (small hermits). At $0.99 a piece I bought 5. I've been seeding a sponge for my 10 gallon QT these last two weeks in my sump area of my Biocube so last night I mixed up a new batch of salt and setup the QT and put the hermits in the QT until I'm done dosing ammonia in my display. I'll maintain water changes in the QT to keep water quality stable for the next week or two.

Brandon I'm not sure what you mean by "you have the option of going full zero ammonia"? Can you elaborate?

And yes, by all means, you're more than welcome to link!
OP
M 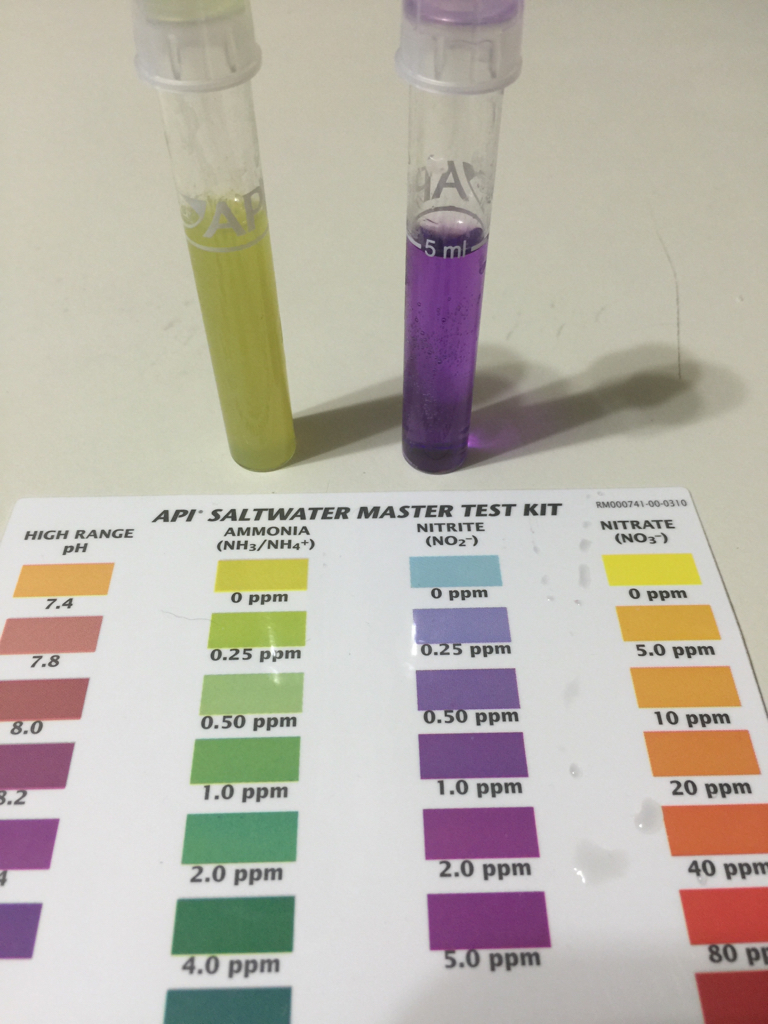 Yup... Not ready yet... But as soon as nitrites go back to zero I'll re-dose and test again and repeat until my tests are zero in 24 hours. Stay tuned!

By going zero I meant that you can either do a full water change to remove the free ammonia added, or use the various treatments like prime to offset. Be aware that prime interferes with api nitrite tests and registers false positives, google that to see. not really a big deal, but it will throw a curve to some users and its ok to point out ahead of time.

Coralline is a living organism and as such doesn't live well in a tank that's getting ammonia spikes on purpose, same for the crabs. Although some may tolerate the cycling just fine, its still against the grain of pure cycling in this manner because living animals shouldn't be exposed to free ammonia they are ready for use after the cycle has fully stopped. Its ok to add the coralline and crabs, they can be pretty tough, but the free ammonia dosing shouldn't continue if you want to be at that phase. Ideally you'd leave them for later when all the digestion tests show the required activity.
OP
M

I won't be going zero... I'm not in any hurry and will continue my ammonia regiment until I reach zero ammonia and nitrite.

I wasn't aware coralline wouldn't make it at this stage, however I was told the crabs wouldn't, hence why I setup the QT. so far all 5 are still doing well in QT. been feeding them daily a few pellets... Hoping they survive for around another two weeks till my cycle is complete.., at least I'm hoping its complete to be able to put the crabs in at that point. 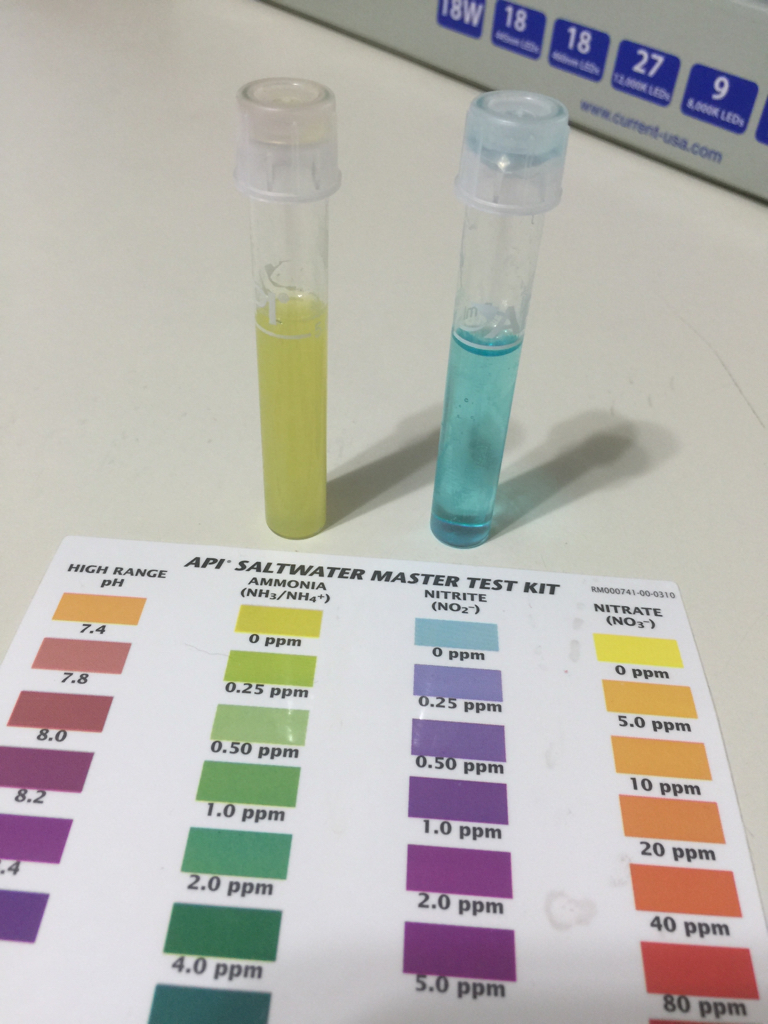 Dosing ammonia back to 2ppm and will repeat the testing phase in the next 24 hours...
OP
M

In case anyone is interested, here's what my bottle looks like that I am using to dose ammonia. 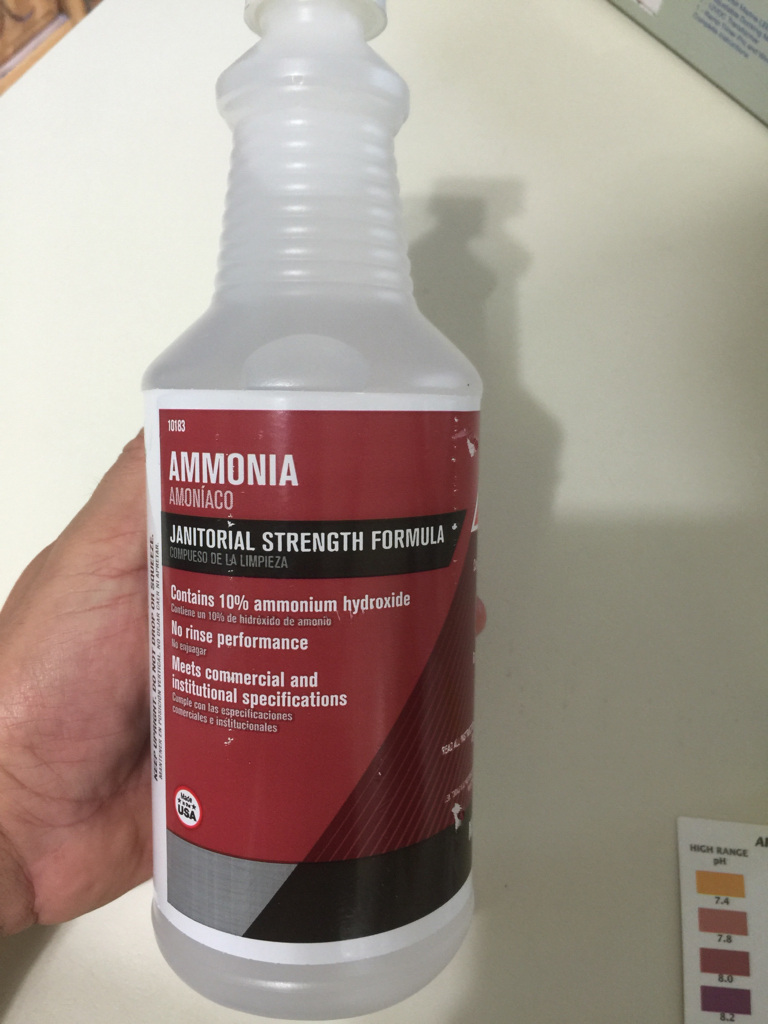 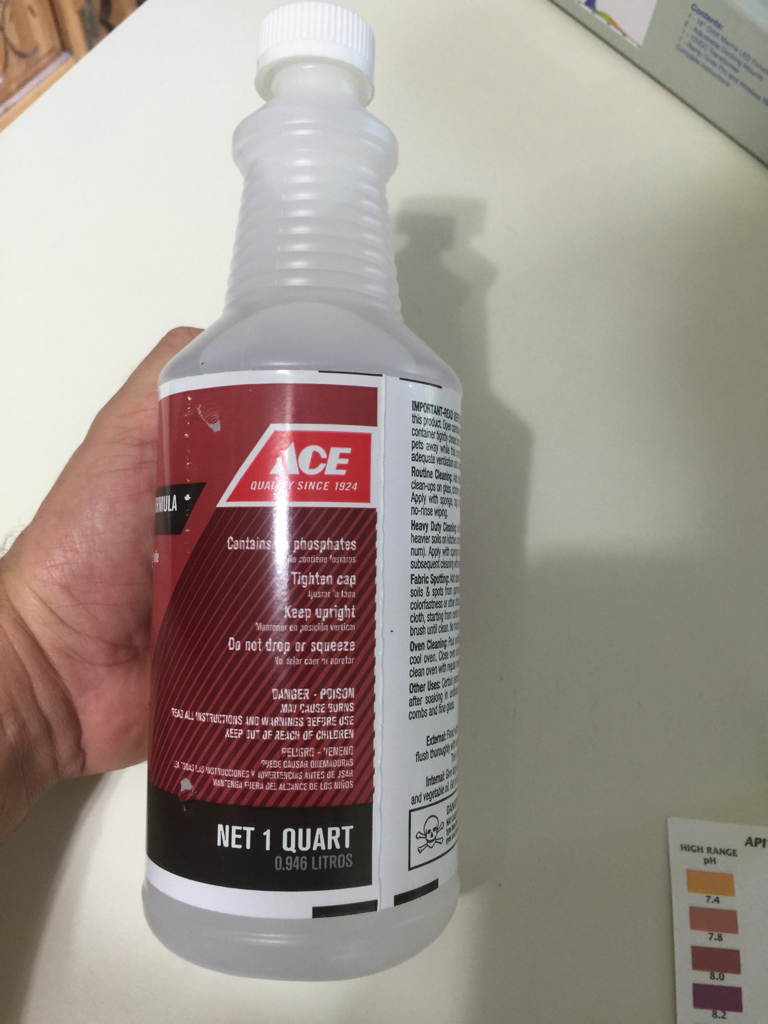 I must always point out when my nemesis API seems to be working. I think you have a kit that shows a true zero, you better clone that
OP
M

I shake my bottles up before I test... Rinse the vials in the tank water before I fill and then test per the instructions.
OP
M 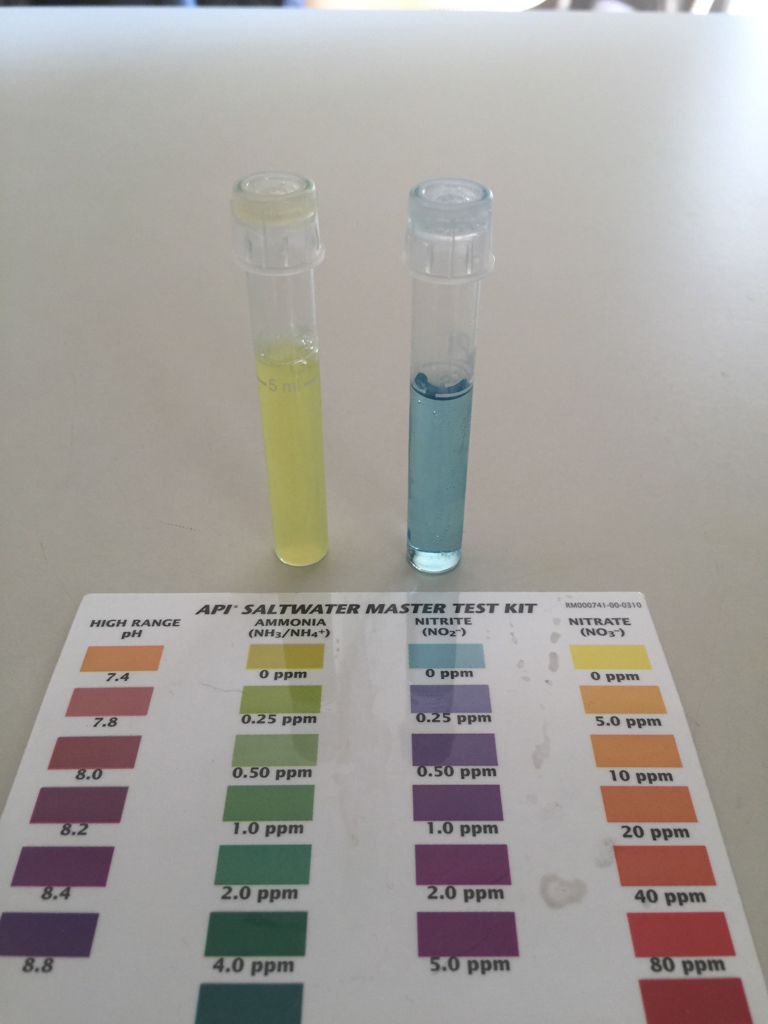 Wait before u do when do u plan on adding fish

Going to continue to monitor daily this week with dosing 2ppm each day until Friday. If each day everything goes to zero then Friday I'll do a large water change and retest my parameters.

the funnest part is how you can verify as often as you like, any set of rocks, with this specific action its so reliable and removes guesswork.

The nitrite readings Im a little less hesitant about as its not uber toxic, again its a test kit I don't own. if you can get repeated digestion tests to show the 24 burn, and there's some nitrate, I really wouldn't care in the least what the nitrite said *if* set time frames have been followed:

or roughly a month using either or boostings but not both

or instantly if using cured rocks or uncured living rocks, bacteria aren't in debate there its whether or not ammonia leaks from them and overcomes bacteria until we make that stop.
OP
M

UPS guy showed up today... Delivered my 2nd package... Test kits ready for the next phase... After the Cycle! 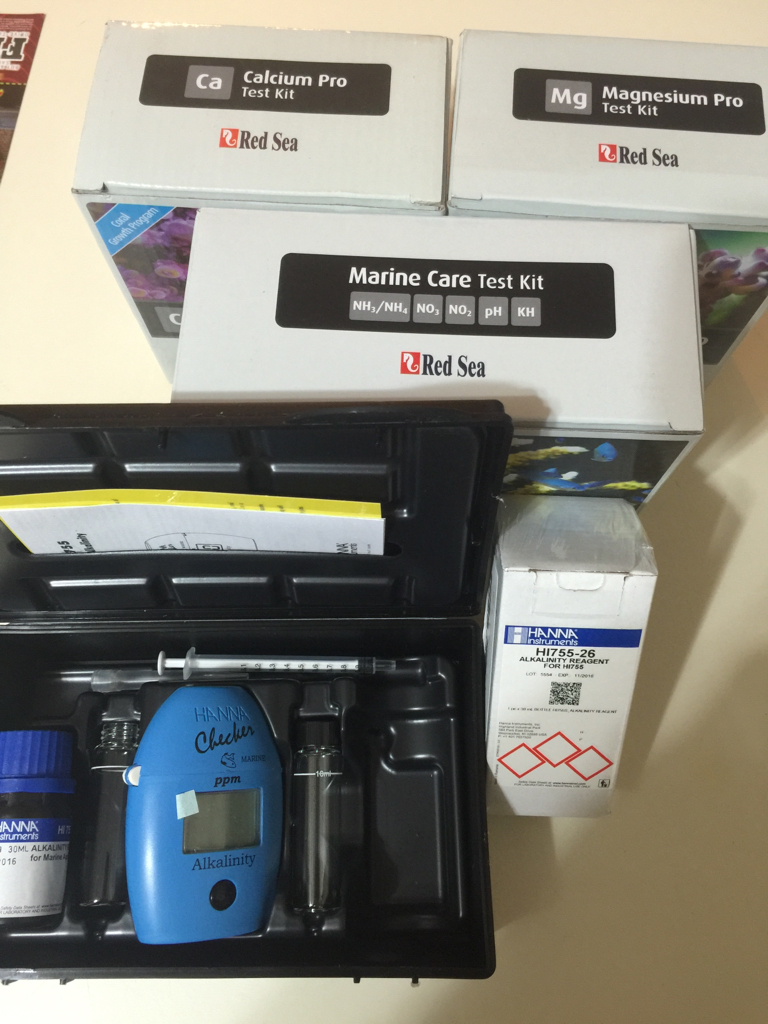 Just want to get the Hannah phosphate tester yet.... When I need it someday
OP
M

So I did a 10 gallon water change last night... Think I should do another one based on where my nitrates are sitting? What ph range should I be looking for? 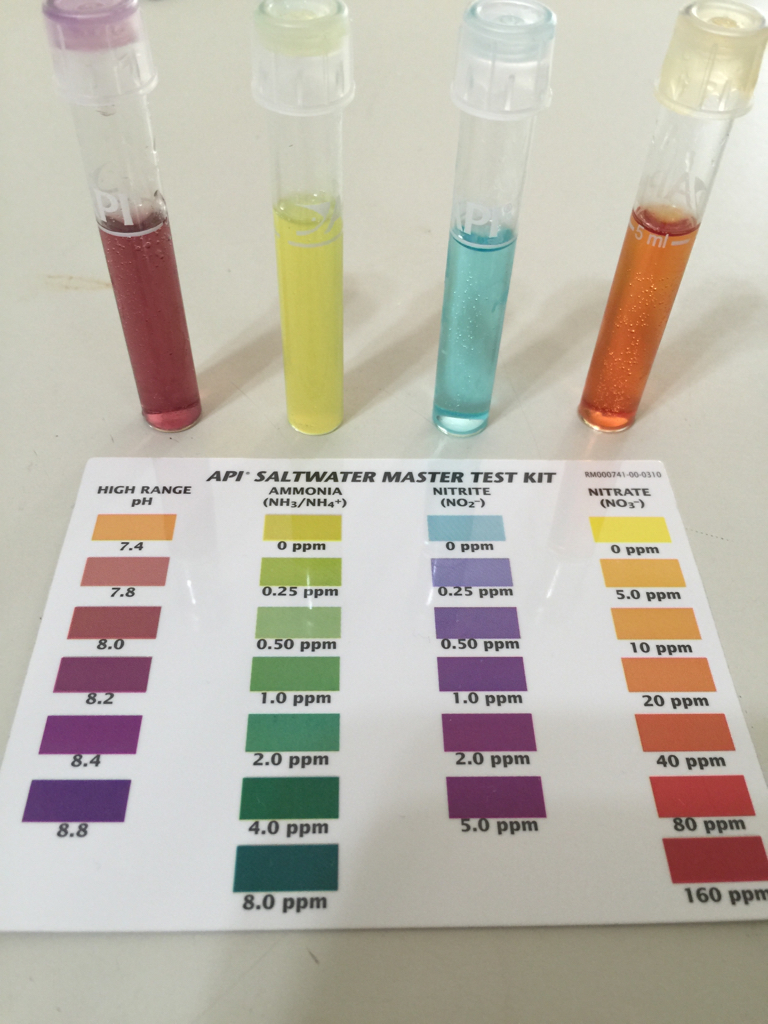