Hey guys… got a scope today and trying to identify these plague that’s been covering my sand, rock and corals for months as a form of brown - green goup with oxygen bubbles caught in the slime. I’m pulling out filter floss every two days. I’ve assumed it’s been dinos up this point but now I’m not so sure.

These guys are still super tiny at 250x and don’t move at all. Aren’t all dinos supposed to move at least a bit? 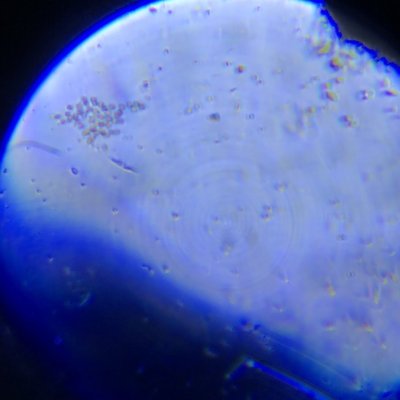 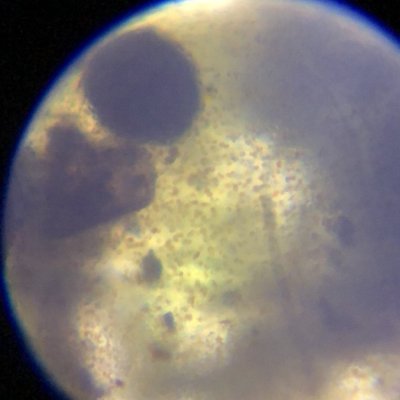 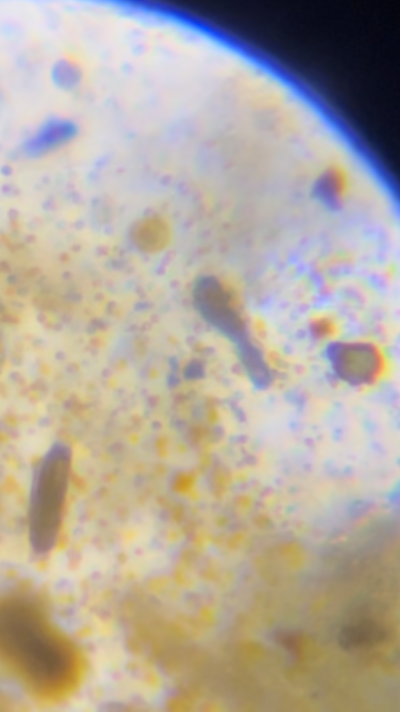 That video and lack of movement points to chrysophytes. I'd like to see a pic of what it looks like in the tank for further confirmation.
Upvote 0
OP

taricha said:
That video and lack of movement points to chrysophytes. I'd like to see a pic of what it looks like in the tank for further confirmation.
Click to expand...

Thanks a lot for your help!

My nutrients keep bottoming out and combined with this suffocating jelly I'm losing a lot of my corals.

I added a picture of what my filter floss looks like after two days in my HOB.

Yep. That second pic is one way that chrysophytes look.
Upvote 0

How did this turn out for you?
Upvote 0
OP

noobreefer2 said:
How did this turn out for you?
Click to expand...

A ton of improvement since those photos were taken! I honestly can't say for sure what has turned the battle around but I like to attribute it to a few things;

1. Getting a microscope to confirm the suspicion that it was chrysophytes to begin with. For a while I was thinking I had dinos and was treating as such. I know think that owning or having access to a microscope to ID tank problems is pretty much a necessity in this hobby.

2. Replacing my two HOBs with a sump for the 36 gallon display. I saw a big difference from the first day it was plumbed in- the increased flow leading to a ton more mechanical filtration was obviously superior to those two seachem tidals. For the first week I had to swap out filter socks daily because by day's end they would be filled with the foul chrysophyte jelly. I combined this with manual removal from the display tank using a brush (these things came off without much of a fight) I was not sold on the benefits of a sump before I installed one- now I am not sure I would recommend a serious tank build without one.

3. I have pretty crappy nicrew 50 watt hyper reefs on this same 36 gallon build, but I started to notice that all my soft corals, zoas etc were flat against the rocks with not a lot of extension. I decided to lower the intensity of the whites and blues at my tanks' mid -day (I use these two lights with a kessil controller) to see if I was just giving those guys too much light. Well the polyps started to stretch just a bit and as a side benefit I noticed the chystophytes started to recede even more. (Makes sense to me since a less intense photo period should equal less algae)

4. I dosed Brightwell's neo nitrate and neo phos for a while to get a reading above zero. Honestly that made these guys A LOT worse. I think like any other algae they were keeping my readings artificially at NIL because they were literally using every bit of free nitrate and phosphate the tank had. I have since stopped dosing.

5. Particular to my tank I still struggle with getting any readings of nitrate or phosphate and I cannot figure out why. Since the end of my initial cycle a year and a half ago- I have never had any measurable amount of NO4 or PO4 without dosing. I'm sure it's one of the reasons for my slow growing soft corals (and probably the sub-par nicrew- but if I had to turn them down are they really that subpar?) As an aside I'm in the Bahamas so I literally hand picked this live rock from the ocean -did I just stumble upon the best naturally occurring strain of de-nitrifying bacteria in the hobby? I guess it's possible but I want to believe something else is at play. (Any feedback on this please let me know!)

6. I still am at war with the chrysophytes! I just seem to be winning the war at the moment- I constantly struggle to keep a clean sand bed for example, this stuff will coat the bottom in a mat if I don't stir it every other day or so. During my battles I did read / understand that chrysophytes have a cell wall made of silica and an excess of silica may be causing the issue. (It's a really good thing I didn't blindly dose waterglass for dinos! I had almost purchased some out of agitation/ desperation.) From my understanding hobby grade silicate tests aren't that great so I am planning to send out an ICP test in the near future (hard getting tank water from here to the USA though for testing lol.) Remembering my hand collected live rock, I suppose it is totally possible for the rocks to be leaching silicate- prompting my tank's perfect environment for chrysophyte growth.

Nothing happens quickly in this hobby- you have to be in it for the long haul!
Upvote 0

And this is another thread to check out if you need any ideas: https://www.reef2reef.com/threads/symbiodinium-got-any-treatment-ideas.811322/ Lots of great people with great ideas on how to beat this stuff.
Upvote 0
T

russell.dexter said:
During my battles I did read / understand that chrysophytes have a cell wall made of silica and an excess of silica may be causing the issue. (It's a really good thing I didn't blindly dose waterglass for dinos! I had almost purchased some out of agitation/ desperation.)
Click to expand...

FYI, this confusion is mostly because an older definition of "chrysophytes" was a general description to include all diatoms, brown algae etc.
We are using "chrysophyte" to mean a much narrower group - which don't have silica walls.
Upvote 0
T

russell.dexter said:
From my understanding hobby grade silicate tests aren't that great so I am planning to send out an ICP test in the near future
Click to expand...

...but do update us on ICP results, please.
Upvote 0
OP

taricha said:
...but do update us on ICP results, please.
Click to expand...

Thank you so much for that info !

I will definitely update when I have my icp results back in a few weeks !
Upvote 0

C
Just defeated dinos. When to do WC?

Question about my Dino situation

A
Is this Dinos or something else?