Current plan is to do a 20L mangrove/macro tank with a coral "bommie" and a 20H mixed reef, with some gorgs/NPS (and a clam?). More pics to come.

My inspiration is mainly from the following 3 tanks: 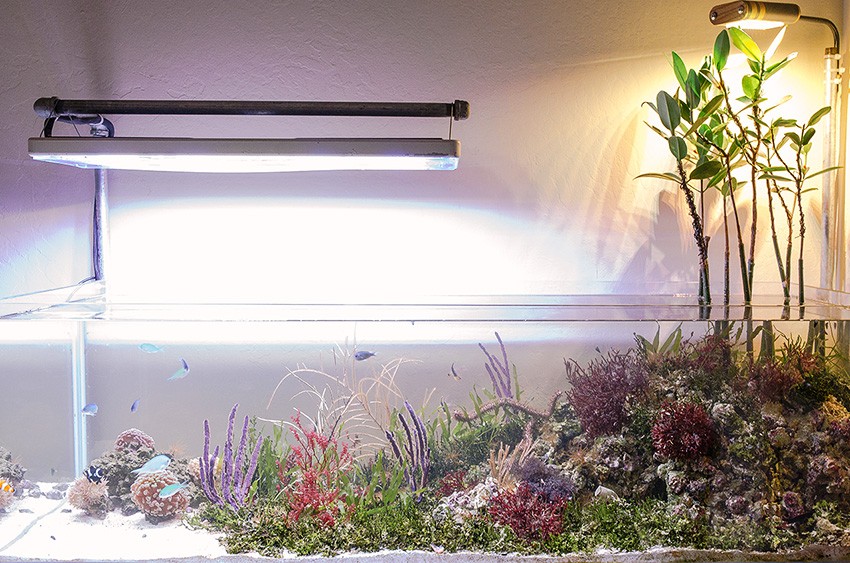 Congratulations to community member brad908 and his 40 gallon reef aquarium for being selected for our November Reef Profile! This all natural nano reef aqua...
www.nano-reef.com 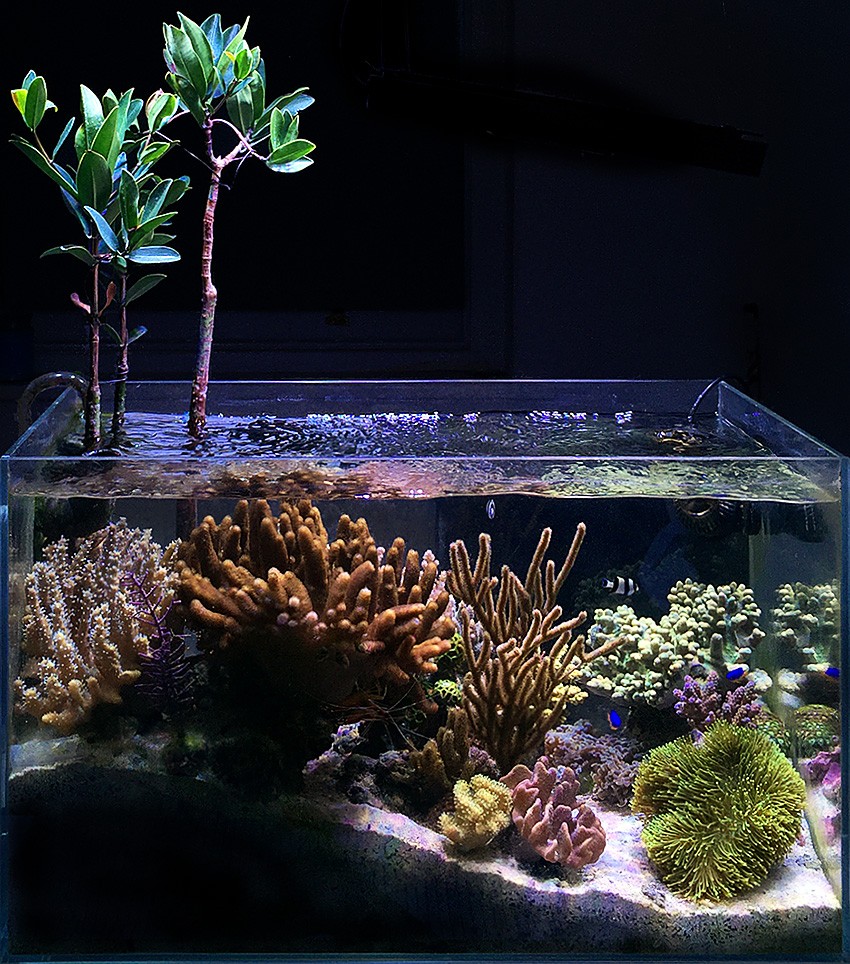 Congratulations to community member East1 and his 17 gallon reef aquarium for being selected for our March Reef Profile! Hailing from the UK, East1's nano re...
www.nano-reef.com 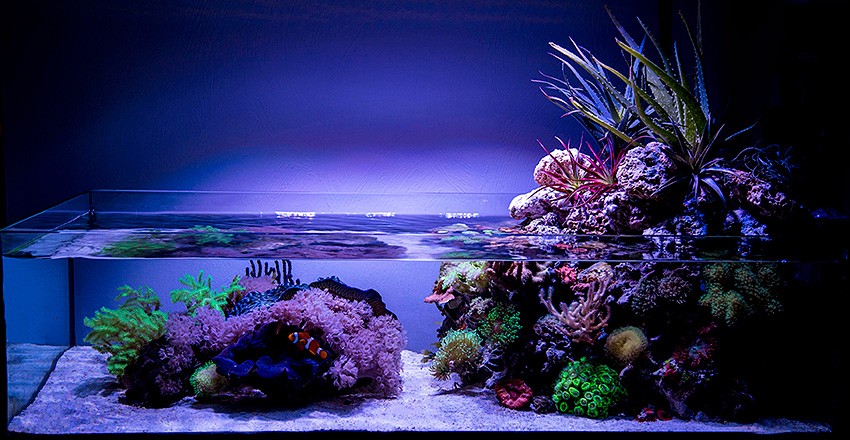 Congratulations to community member Wawawang and his 40 gallon nano reef aquarium for being selected for our June Reef Profile! Below is the aquarium profile...
www.nano-reef.com
Last edited: Feb 17, 2021

#WelcometoR2R !
Look forward to the build!

Welcome to R2R!!! I have always been fascinated by Mangrove tanks - good luck!
F

I LOVE planted marine tanks and brad908's mangrove lagoon is one of my all time favourites! I can't wait to see yours come together!
OP

Thanks for all of the kind welcomes! Can't wait to get going on this build and post some more updates. This week is the last week of classes in my graduate program, so I've been busy finishing assignments. Next week is finals and finishing grading, then visiting family out of the state for a week. So the tank will probably get fully rolling after that. There's a LFS that specialized in reef tanks about 30 minutes from here that I haven't been to yet either (opposite direction of travel from where I normally go, so I don't make it out there often!), and I plan to go visit after the holidays.

This week, I purchased some used equipment, so the plan has been (slightly) upgraded.

I'm also look at getting an ATO, currently my top choices are either a Tunze 3155, or the SpectraPure UPLC-II, especially if I can get it used. Any thoughts on ATO choice? I know that these both seem to be commonly for larger tanks, but I didn't like that the Tunze 3152 seemed to have less favorable reviews, and the other nano tank ATOs seemed to be lower quality. Hopefully running one of these on such a small tank without a sump won't be an issue.

Question: if you were doing this build, what would you use the Apex Jr. for (other than temp control)? Trying to figure out what modules to look into, it only comes with a temp probe and no display (I'll do all the programming from my computer, so not worried about that, it was a good deal). Also figuring I'll add a ph probe to help as a back-up for the ATO.

Will post some photos once the new gear arrives!
OP

I'm out of town visiting family for the holidays, heading back home Tuesday! I wanted to post an update before I left town because I had a bunch of new items for the tank arrive, but I didn't have time unfortunately. So I'll just have to list the new things I have, and then post pictures when I get home in a few days!

So I purchased some more items (mostly used through R2R, a few new things from sponsors), and the tank has gotten a further upgrade! I decided on most of the upgrades since they seemed like a good idea considering that I plan to hopefully upgrade to a larger tank in the not-too-distant future.

In addition to the Aquaclear 70, Mame Skimmer, and the Coral Compulsion lights, I picked up an MP10wQD, SpectraPure UPLC-II for an ATO setup, and I decided to get an Apex Classic instead of an Apex Jr. I also picked up a BRS 7-stage RODI setup.

I ordered 5 lbs of Marcorocks reef saver dry rock from BRS, as well as a bucket of IO salt. Time to start curing some rock when I get home!

So I've gotten a lot of boxes in with supplies to setup the tank, including an RODI system that I need to setup in the basement and 5 lbs of rock from BRS. I'll take some pictures of everything as I unbox and setup, but that probably won't start till next week at the earliest, since I'm out of town this weekend. 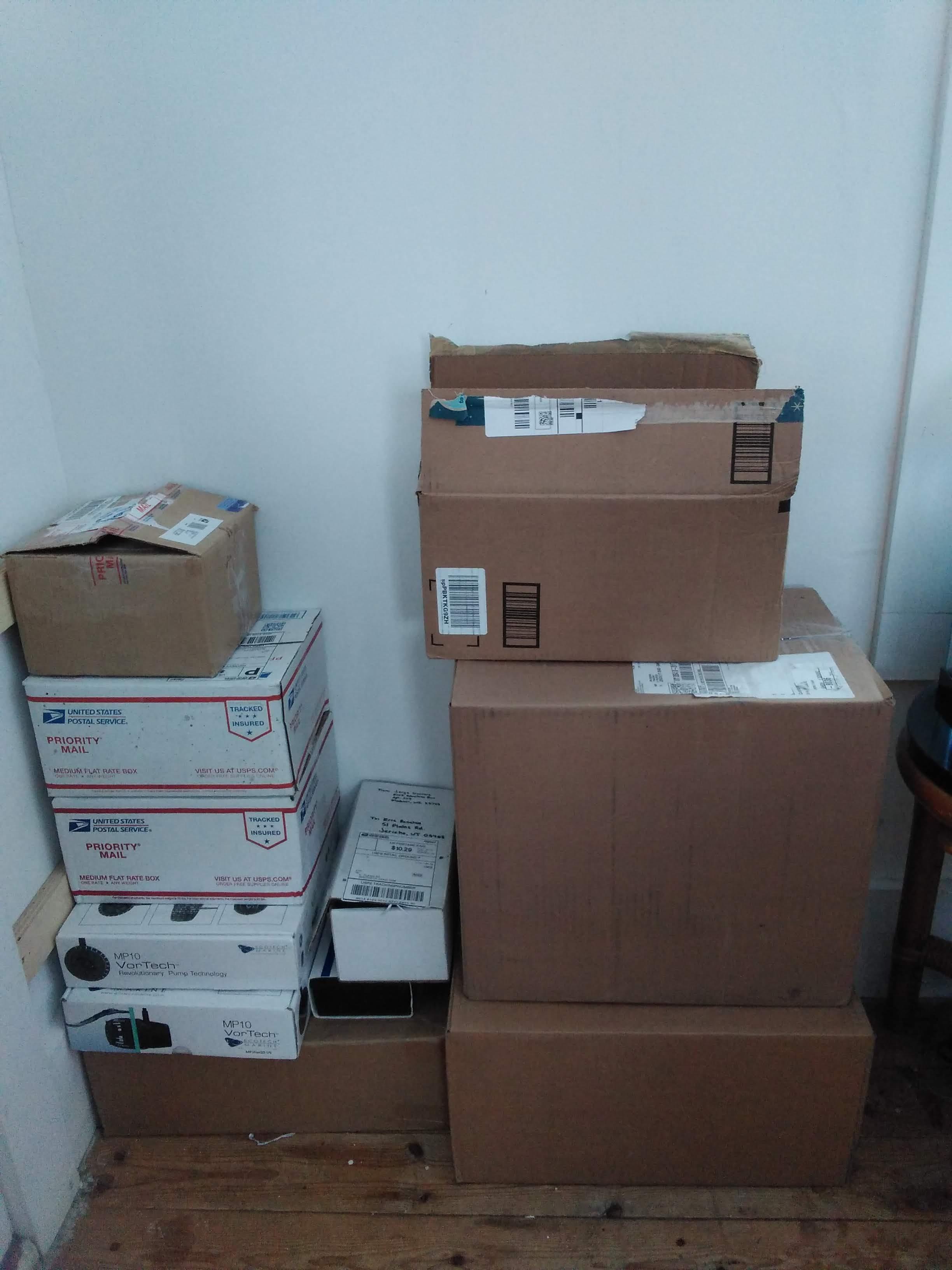 nice! I am also a fan of macro tanks I have a 20L a few years ago and playing around with the idea on another.
I am curious to see how the par38s work for you.

Yes, but not terribly exciting (yet!).

I received 5 mangrove propagules in the mail from Florida about 10 days ago. I'm experimenting with growing them out in a planted freshwater tank with dwarf cichlids (kribs), using the substrate I use for all my planted tanks + osmocote pellets + liquid trace fertilizer for iron, Mn, Mg, etc. I have them under a 36w Sansi full spectrum grow bulb.

The 10 gallon tanks I had in mind for the original build currently have a small breeding colony of dwarf African shell dwelling cichlids in one, and native North American nano fish in the other. In the meantime, I picked up a 20L, a 20H, and a 29, all standard Aqueon rimmed aquariums, for free from some local hobbyists. So I'm upgrading the build already before it's even wet. The 20L currently has the kribs and mangroves in it, the 20H is empty.

The 20L is going to be the macro/mangrove tank (with some coral), whereas the 20H will be a mixed reef (with hopefully some of the easier gorgs and NPS, like dendros/sun corals).

I just ordered some e-marco-400 from BRS yesterday and have had all of the dry rock (marco rock) for a whilte, so will hopefully begin scaping in a week or so. I also picked up 2 reefbrite LED strips from BRS, one 50/50, one actinic,to go with one of the PAR bulbs over the 20H. The 20L will have the full spectrum grow bulb on the mangrove/macro side, and the CC PAR bulb on the other. We'll see how this lighting plan works out, I may have to upgrade... A local reefer has already offered to let me borrow his Seneye PAR meter, so I'm planning to test the lighting setups in the tanks soon to get an idea of whether it should work or not. I don't plan on keeping much in the way of SPS, so I'm hoping it should be enough.

Here are some pics of the mangroves. They took a few days longer in the mail than I was expecting, and unfortunately the growing tip broke off one in shipping. Not sure if that one will recover, we'll see. At least 2 or 3 look like they are doing okay now. 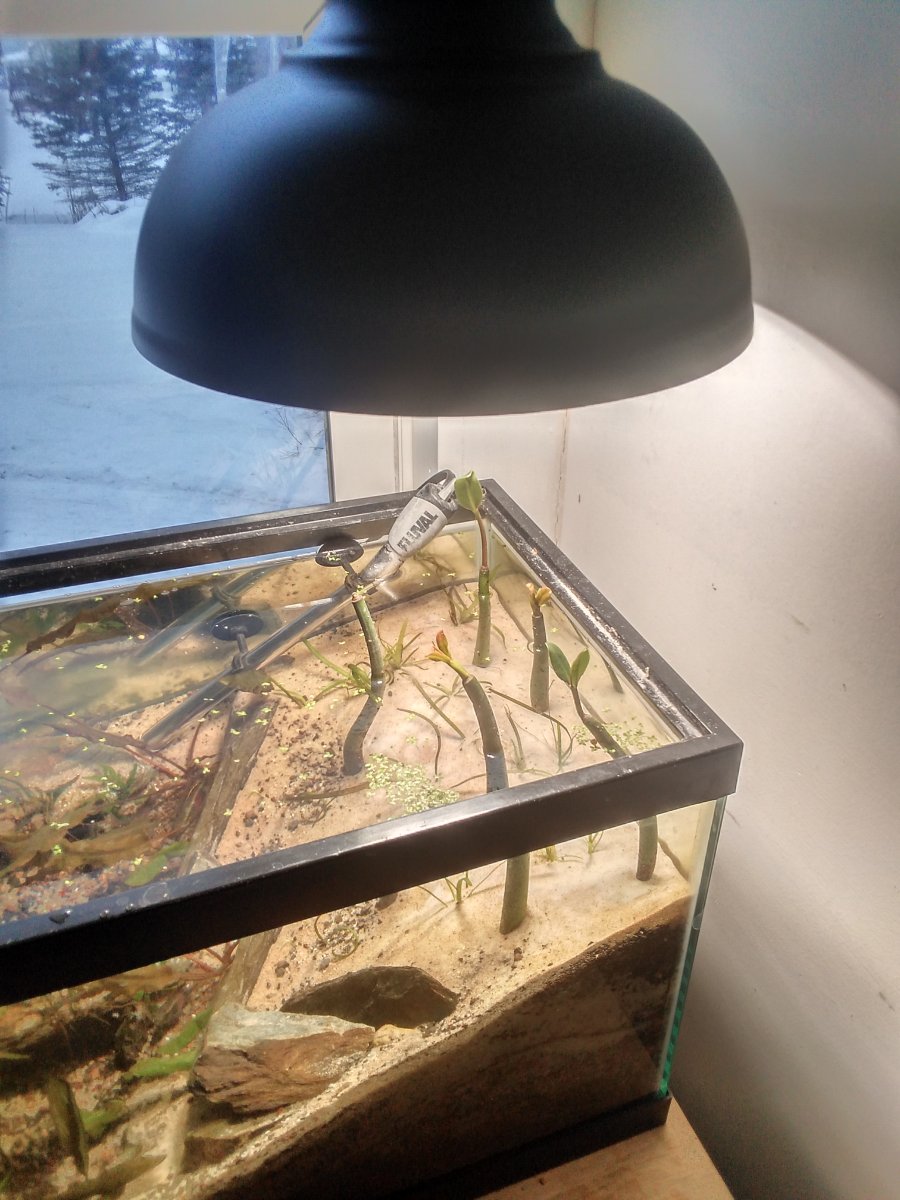 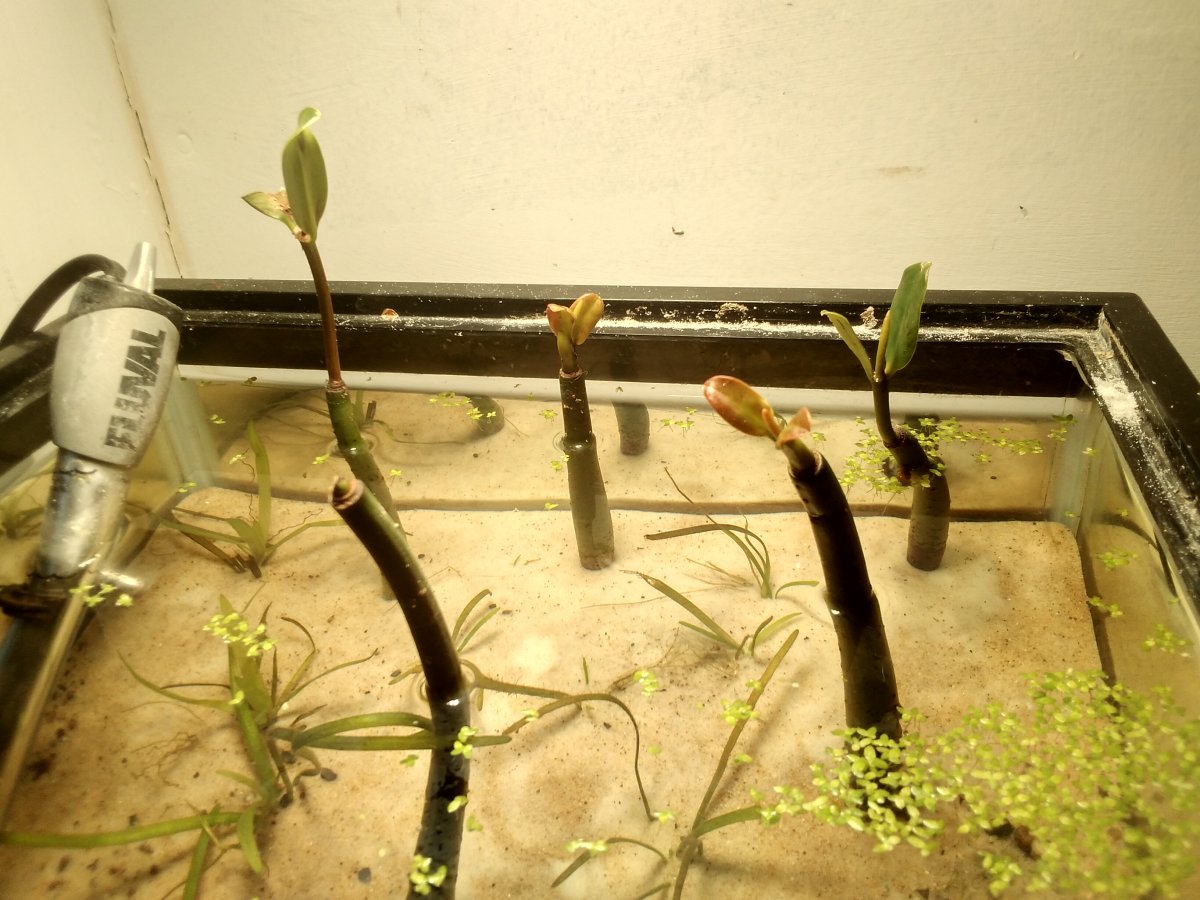 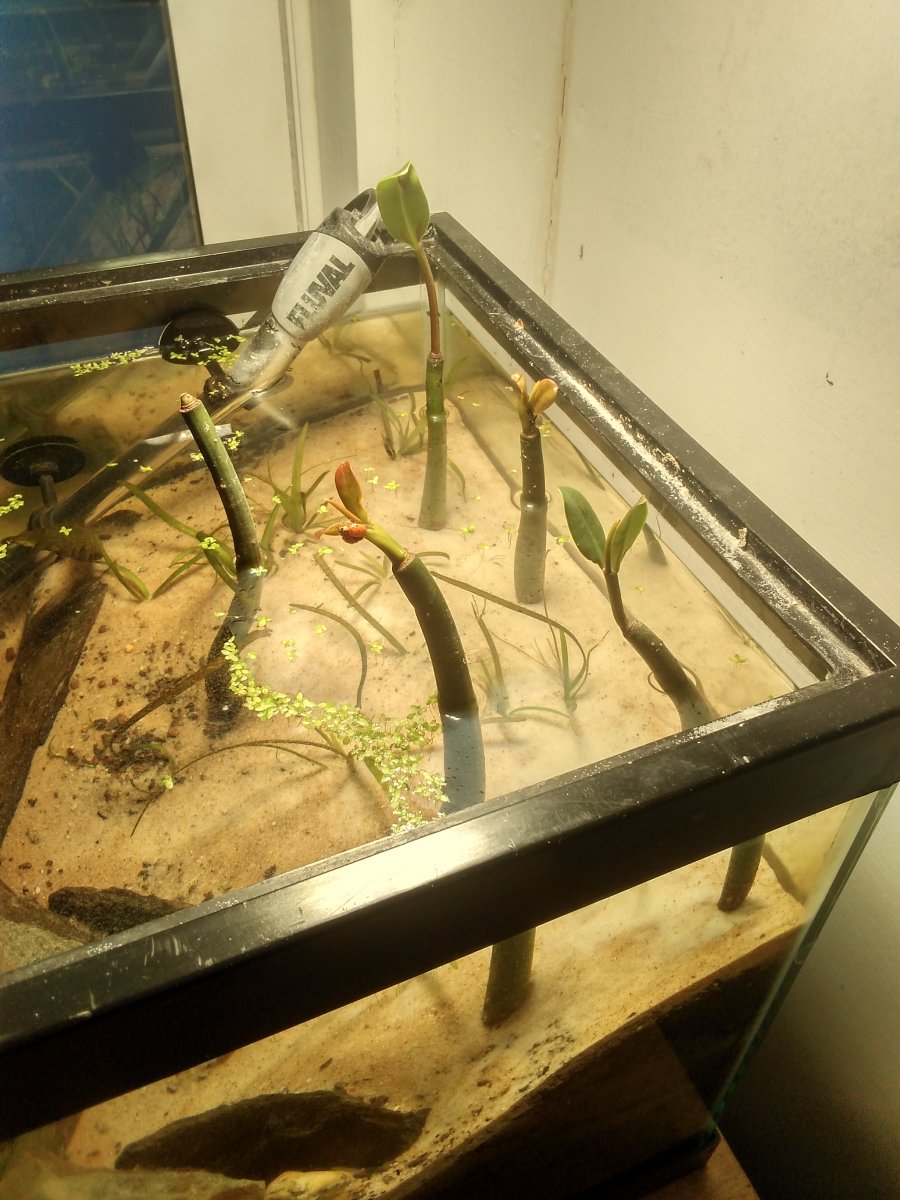 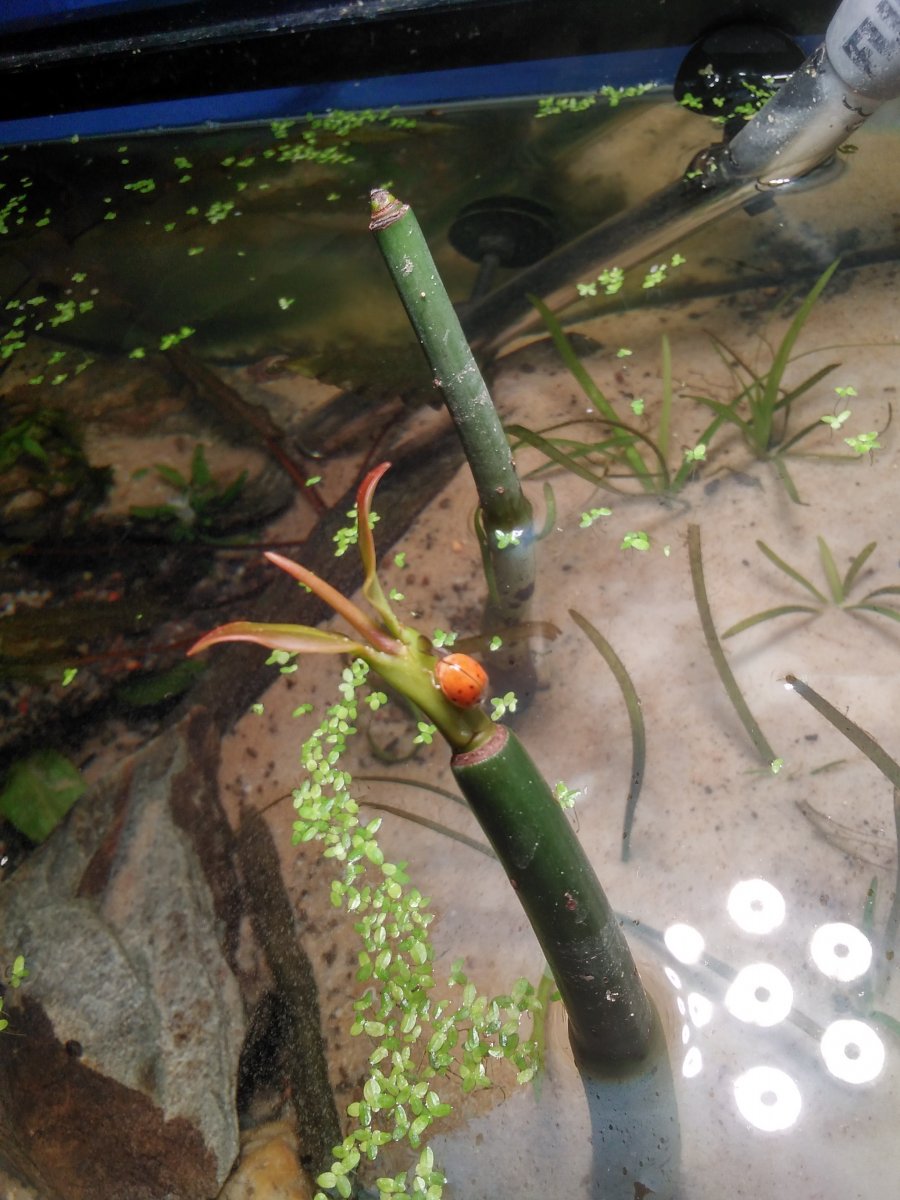 Build Thread First tank on R2R - 120g with all the goodies!