After battling some settling issues in my home which actually caused leveling issues with my current tank, I've decided to move my entire office downstairs. Since it's on a slab, why not go big? After some research I determined I can use some of my existing equipment, DIY some things, and essentially build a bigger tank for less than the off-the-shelf offerings from Red Sea, Innovative Marine, etc.

Unfortunately this has been a pattern for me: buy tank, get it stable and growing over a year or so, then change plans. First it was too small of a tank, then it was moving, then moving again, and now settling issues (and terrible Red Sea stands). Maybe a 2,500 lb monster will slow the rate of change?

The plan is to make a cost effective build without skimping or compromising on important parts.

Huge thanks to Advanced Acrylics for working with me on an accelerated timeline over the concerns of my existing tank. They were very accommodating and communication was great throughout the build. I picked it up directly from their factory in Anaheim. Pat is a friendly dude and takes good care of his customers. The tank looks fantastic!

A note on lighting:
I spent some time debating whether I should stick with old tech or go with LED's. I have 2 150W MH fixtures now that I love, and would have loved to throw a couple more over the tank for good coverage, but heat concerns and dwindling bulb options drove me away. Listening to BRS's podcasts and hearing quite a few "MH is disappearing" asides as well as seeing so many bulbs on clearance on their site sort of sealed the deal. It makes me sad because I loved the results I got from MH. I know BRS isn't the only reseller but I feel others will / are following the trend.

I then considered T5's -- I could light the tank on the cheap with 2 48" 6 bulb Vivosun fixtures but again the heat, bulb cost, and sterile look of T5 drove me away. The idea of little shadowing and incredible coverage is amazing to me but the lack of shimmer (I'd need to add LEDs for that, driving the cost right back up) turns me away as well. I also wonder how much longer T5's for aquariums will be produced as the T5 market is rapidly shrinking and I doubt aquarium sales are enough justification for bulb manufacturers to continue!

So I settled on LEDs, the way of the future. However I didn't want to compromise on coverage... which really left me with two options: A bunch of pucks (and the resulting mess of power cables and outlets) or the panel style like Atlantiks (or RB Photons). I looked at AI Primes but they don't have the punch... so then it was 8 XR15's (OUCH)... by elimination, the choice became clear: go with Orphek. The product isn't perfect but honestly none of them, other than the Kessils, in terms of UX and reliability, are perfect in my experience. That leaves me with 2x Orphek Atlantik v4 to start, adding another panel down the road. Now, BRS claims 1 Atlantik cannot light a 48" tank for LPS and soft, however if you look at the PAR charts they provide... you totally can. With SPS at the top. I understand they need to nail down a set of criteria to gauge PAR results, ie 75-150 PAR for LPS/soft and 250+ for SPS, but in reality I have LPS that don't even like 75 PAR and BTAs that want to be directly under my MH fixture at 250+ PAR. I believe with the appropriate light and coral placement I can achieve mixed reef goals with just two of these fixtures and add a third down the road when things grow in.

I'm leaving my thoughts here because as I've learned big tanks are NOT cheap to light unless you go MH / T5, but there are some other considerations with those fixtures and for me it was heat and bulb supply. In my experience, lighting requirements can be significantly overstated and I'm curious to see and report the progress I make with my choice.

Got the tank in today. Even though I had 4 guys and it's maybe 170 lbs, it was sketchy getting it down the stairs. I had to take a door off and scuffed up a couple walls but no big deal. I'm painting the house soon anyways (except this room, which will remain unremodeled for now so I don't have to stress about damaging anything with my hobbies). This thing is HUGE so I had to get in it to show the scale I'm 6'3 BTW.... 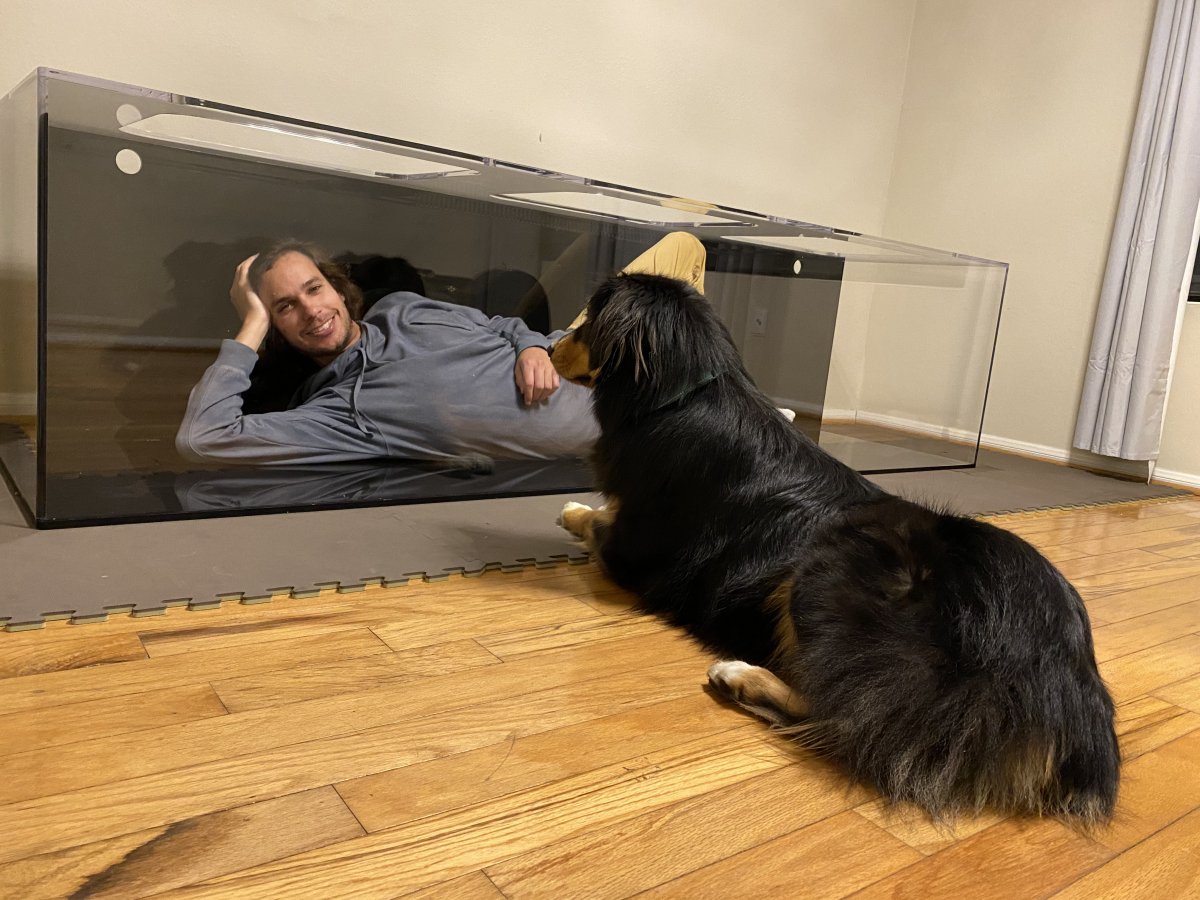 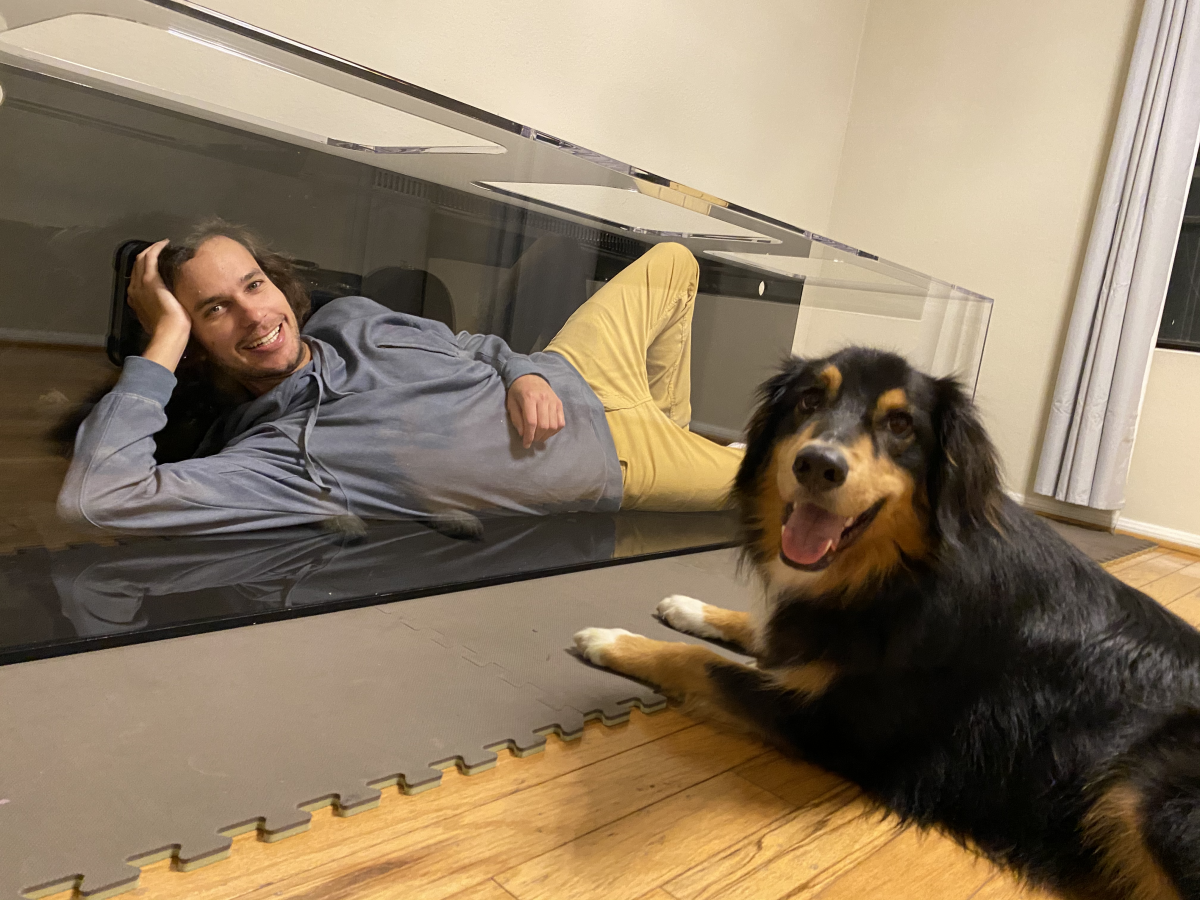 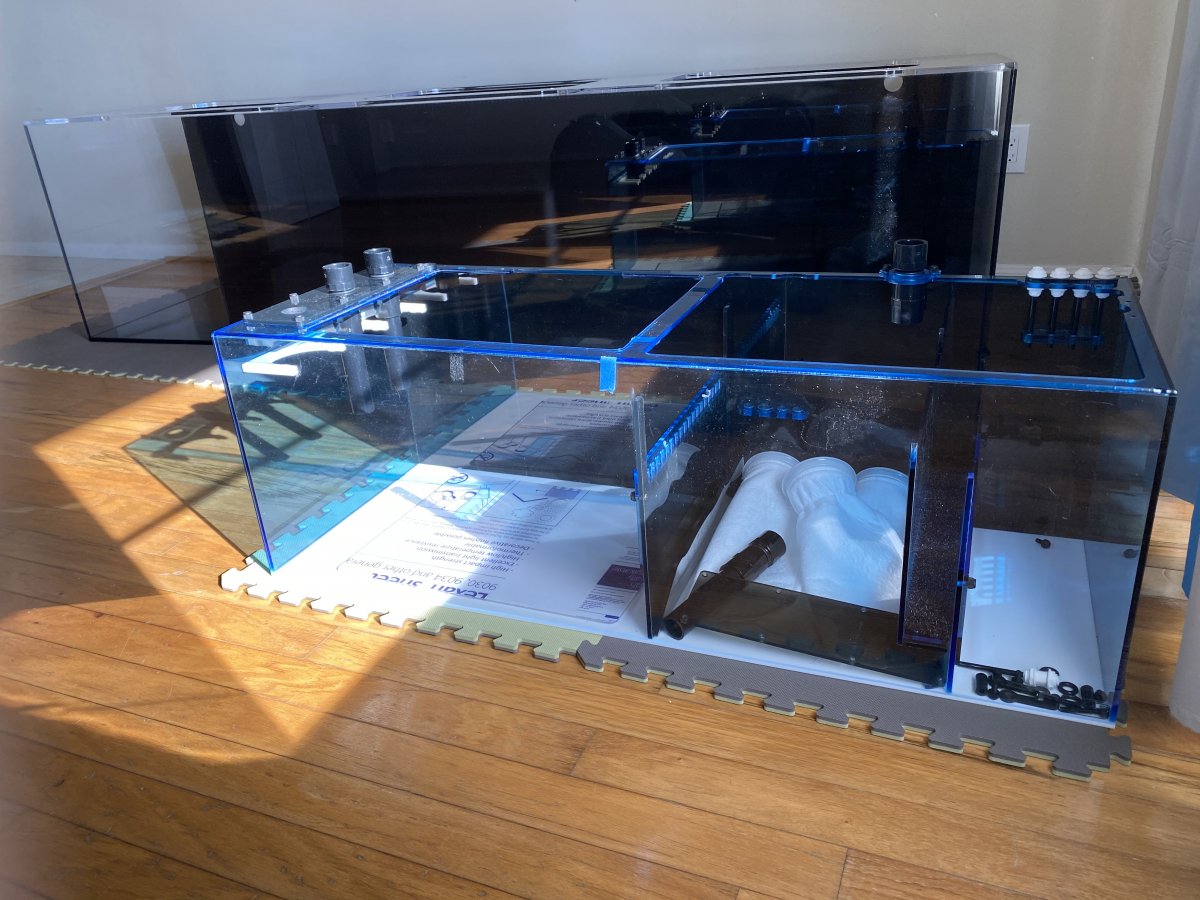 Sump came in today! Unfortunately one of the baffles is damaged but it shouldn't affect the function. The person packing the box just tossed 10ft of hose I also ordered in, jamming it into the compartment and breaking part of one of the baffles. I also received my current pump and second heater, also poorly packed and rattling around in the box. All good, hoping they will offer me a discount on the sump due to the damage. It sure would be a lot less effort than returning it, especially at this time of year.
OP 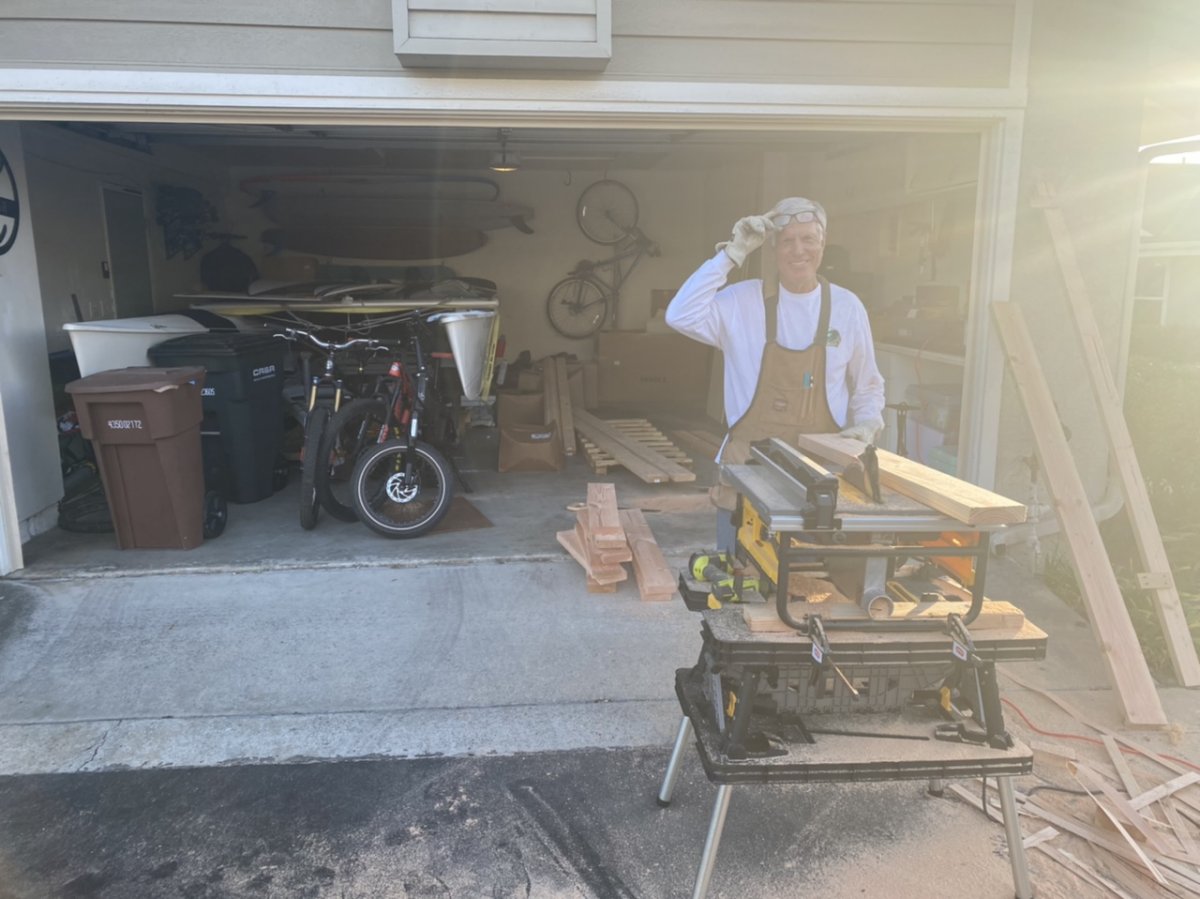 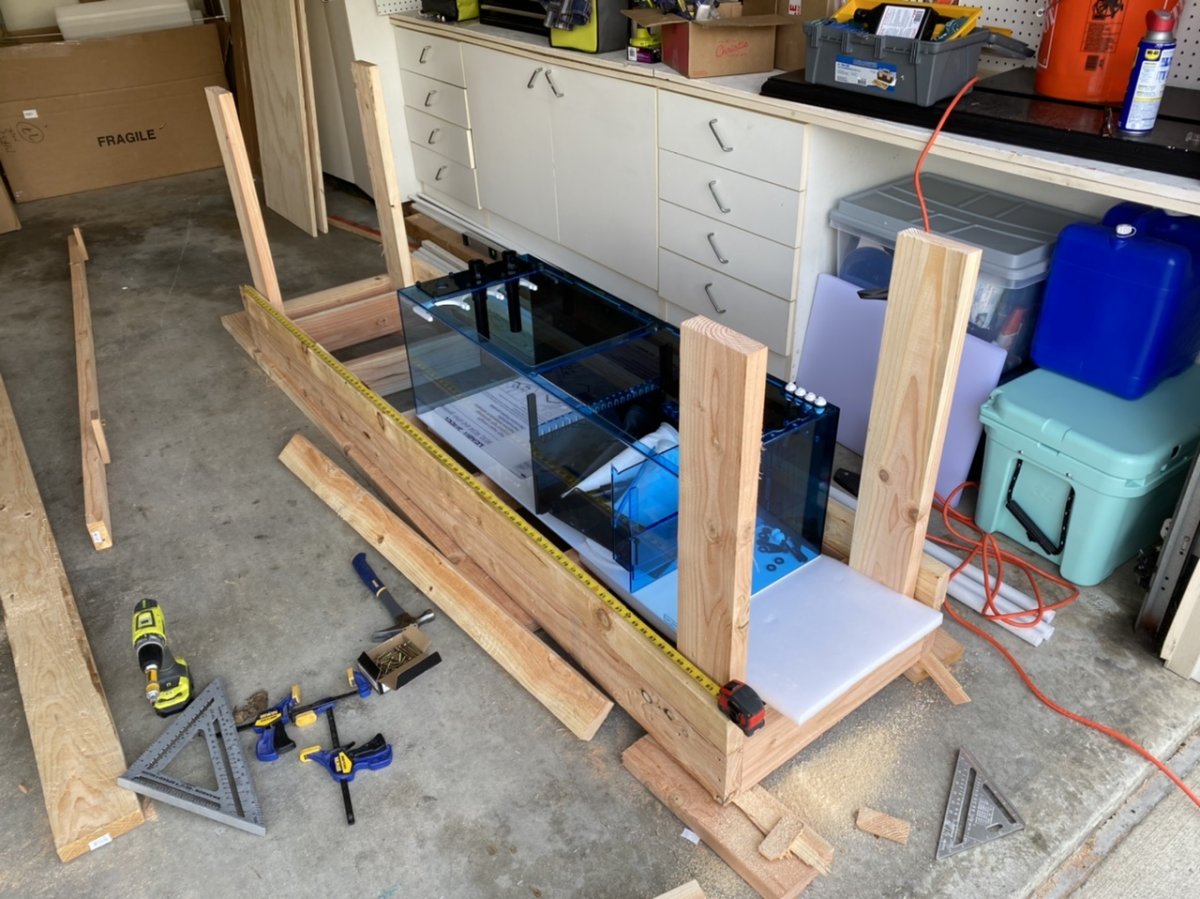 Making progress. I’m pretty clueless with woodworking but my dad is talented at building furniture. He’s helping build the stand while I figure out plumbing and diffusers for the Orpheks.
The plan is to build the stand now and skin it in a couple months when we have more time. We’re also building a hanging canopy so I can mount the Orpheks nice and high.

Looks very cool! I will be following along, thanks for sharing.

beautiful tank!!! ,you know i'll be following along
OP 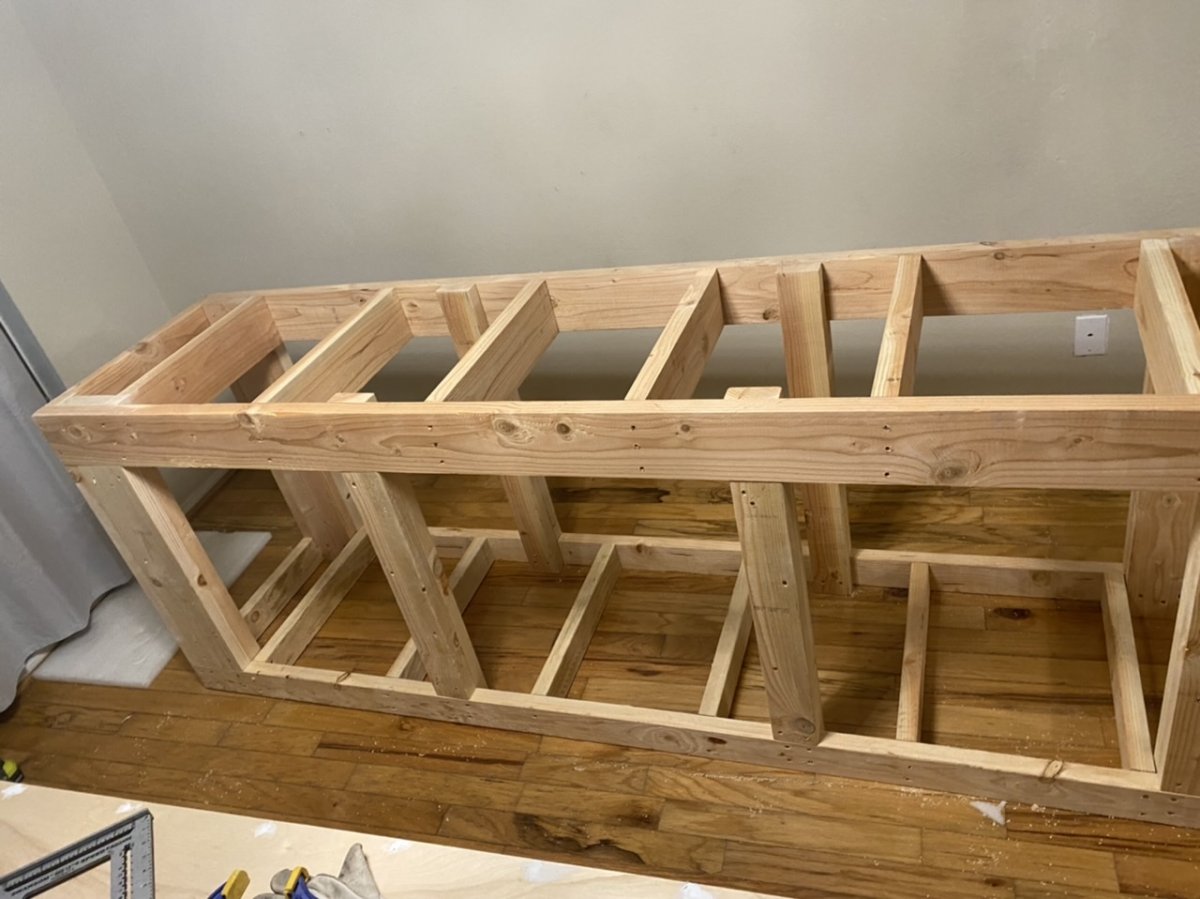 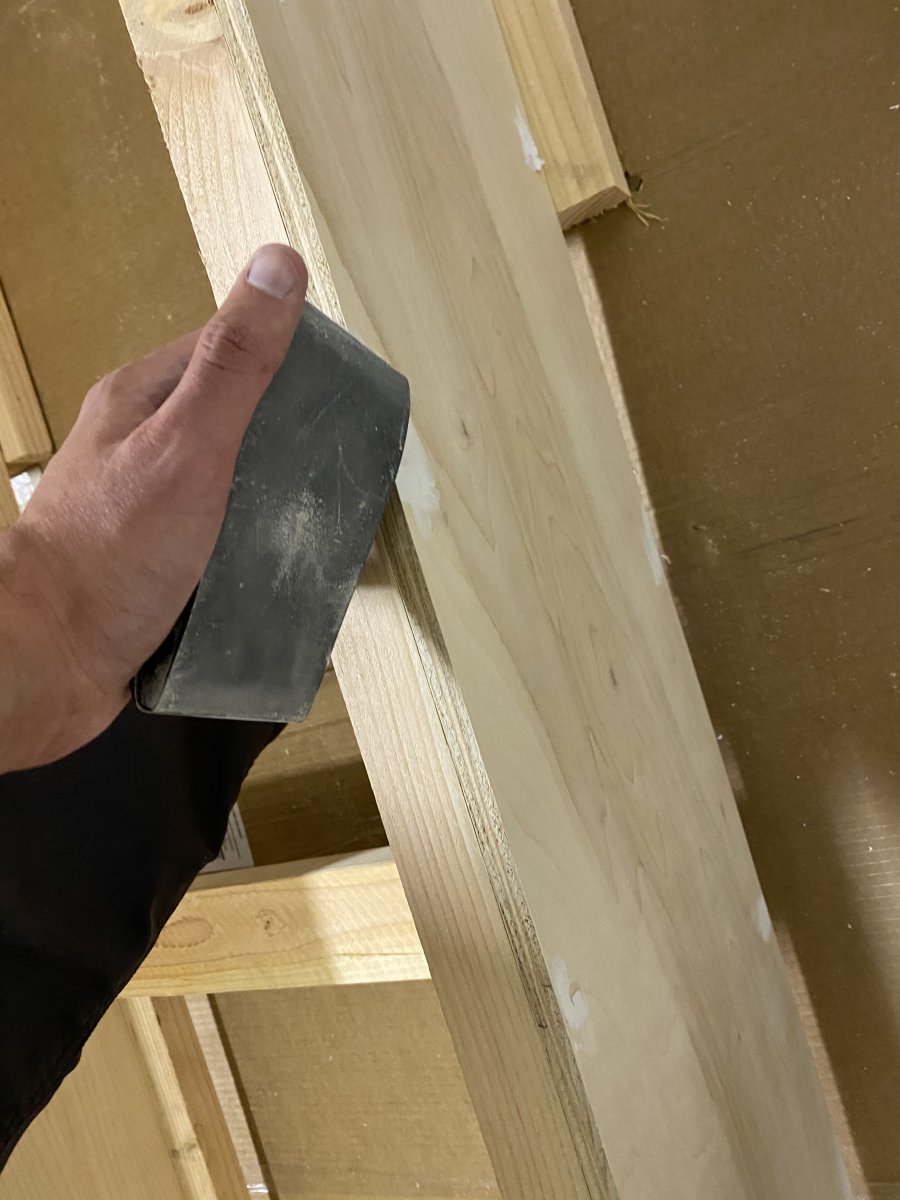 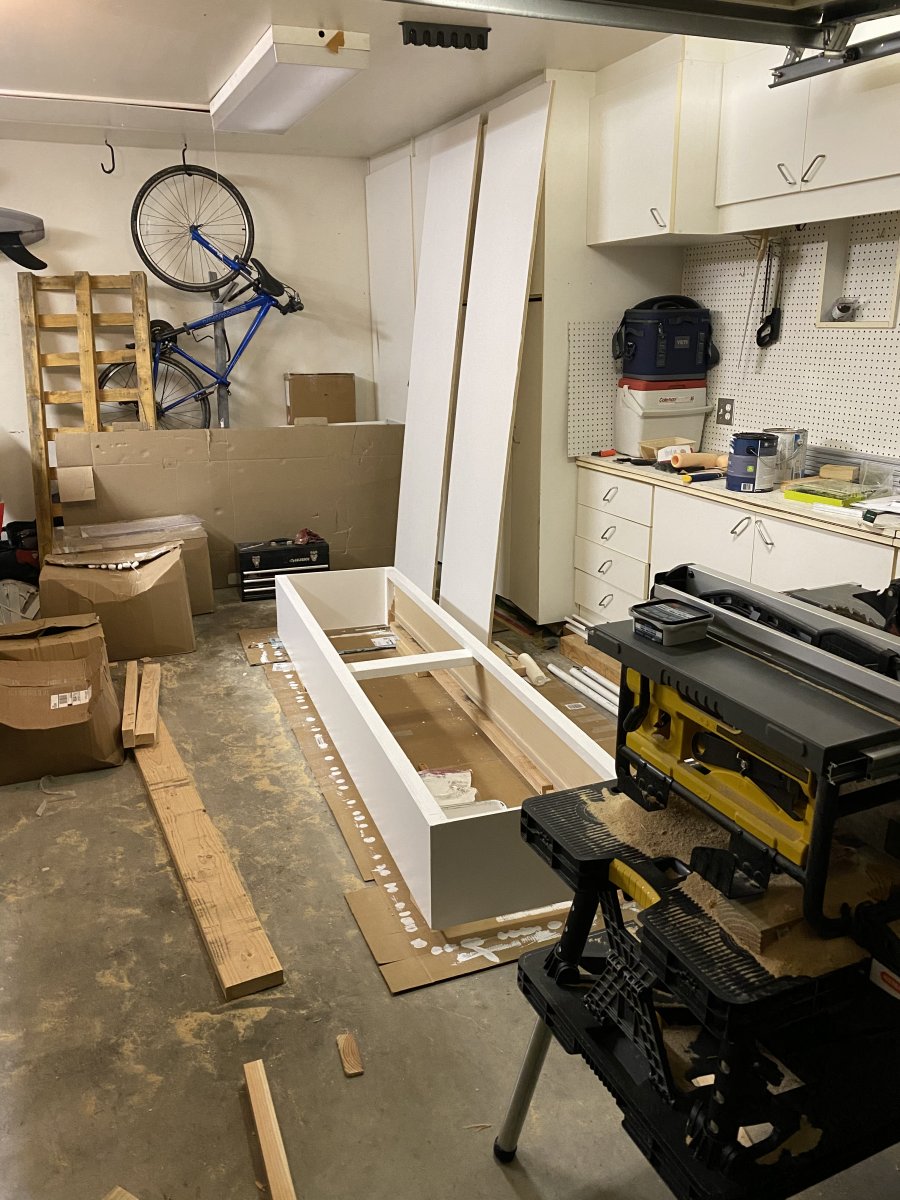 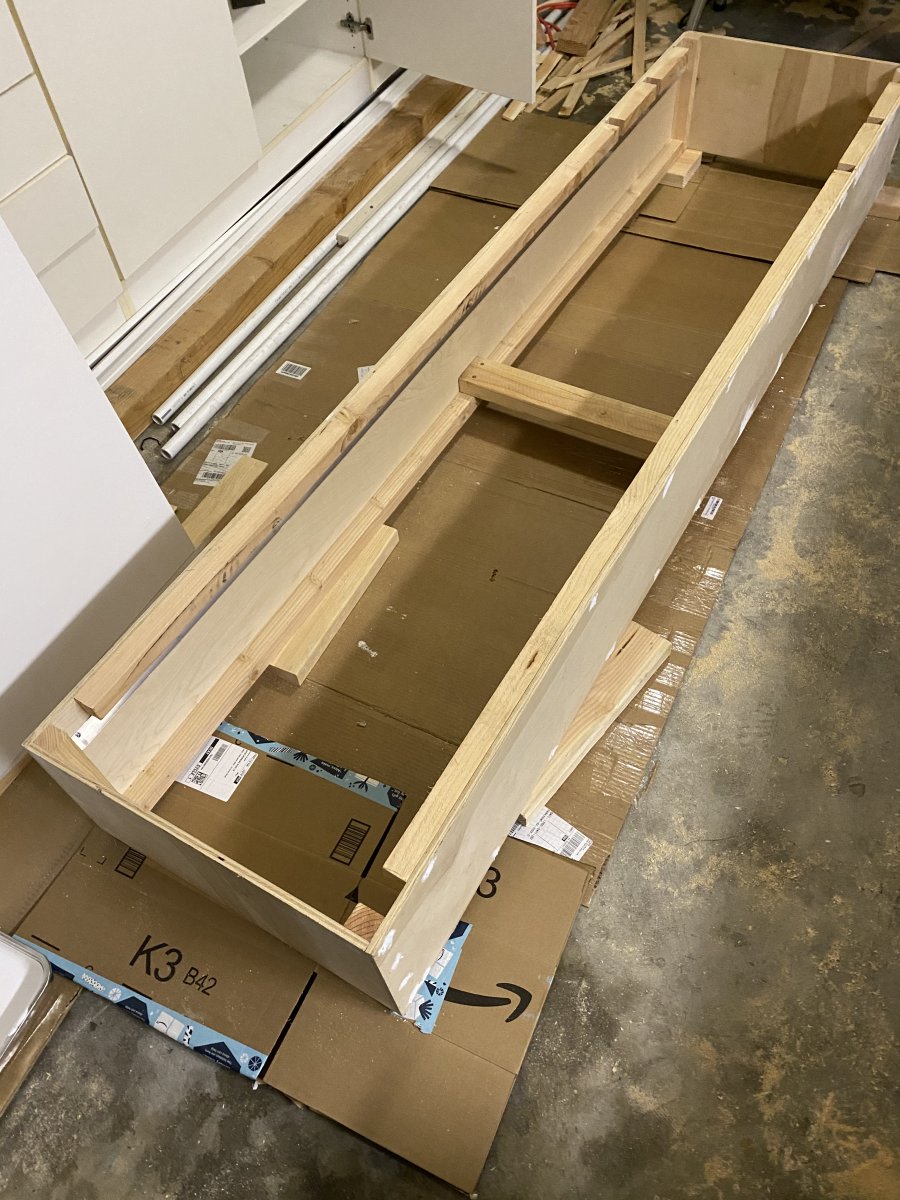 Made some progress. Canopy built and currently prepping and painting. Stand is complete for now. Going to get the tank on and worry about skinning it at a later date. Project is moving slower than expected and I’m getting antsy! I want to get the tank on the stand!

Looks like a great start! Can't wait to see it running...
I been working on my 300 gallon here is my thread

I got many request to start this post, so here it is. I Started building and planning a 300 gallon reef to replace my current 140 gallon. Tank is being made and I have started building the stand out of reinforced fiberglass and gluing it all together with special epoxy which is pretty pricey...

www.reef2reef.com
And look at what Santa brought to help me with this 300 gallon project.
I am building everything except for the tank, skimmers and pumps. Building my own 2 sumps(1 chemical sump,1 Biological sump), and 1 refugium that will over flow into each sump.

HI,you are putting ply and 3/4 foamboard under that tank ,correct??
OP

fishguy242 said:
HI,you are putting ply and 3/4 foamboard under that tank ,correct??
Click to expand...

3/4 ply and a 1/2” neoprene mat (per suggestion of manufacturer). I also sanded everything perfectly flat for the ply to sit on. We will also be making shims for the tank since the floor isn’t quite perfect.
Last edited: Dec 25, 2020

fishguy242 said:
HI,you are putting ply and 3/4 foamboard under that tank ,correct??
Click to expand...

Merry Christmas by the way 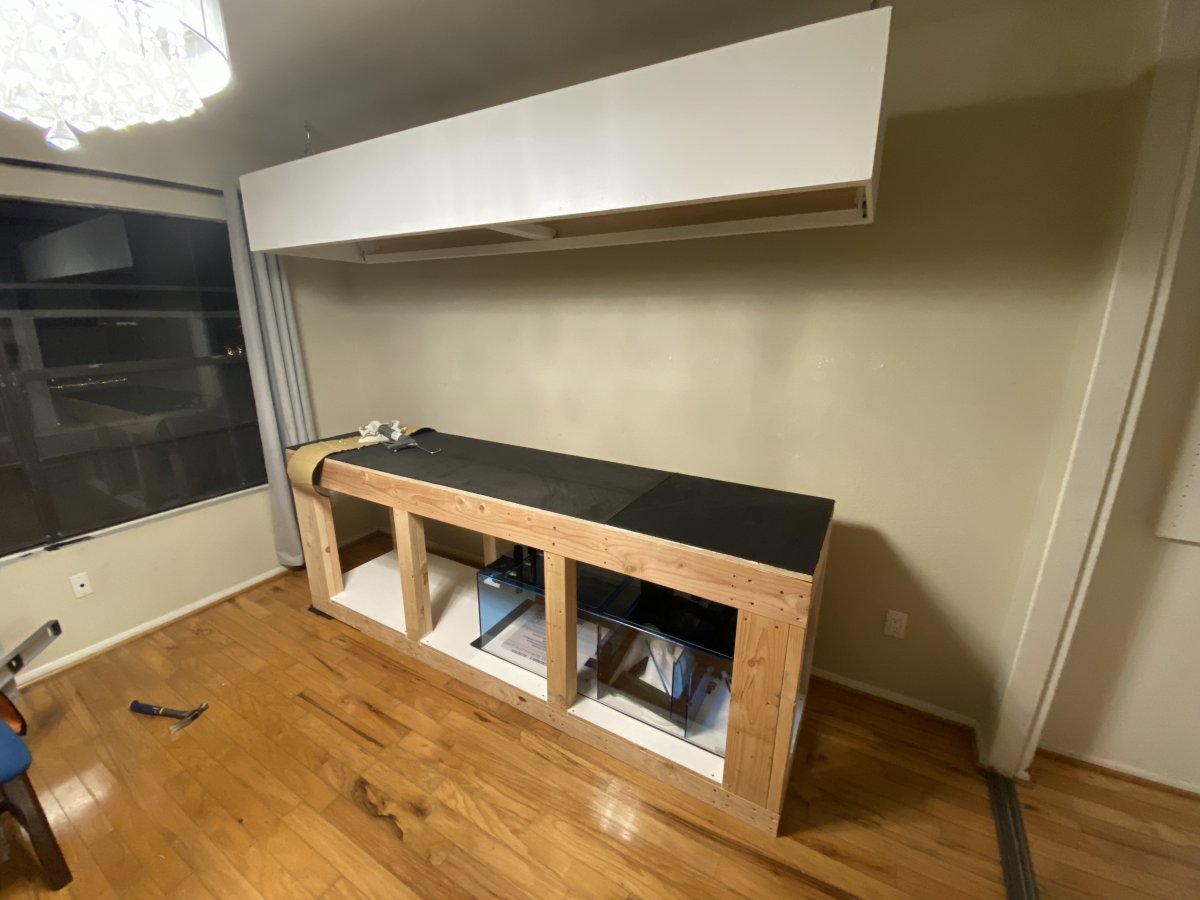 Progress! Almost done shimming (had to do a lot because of the slope). Caulked under the stand. Sump installed. A rough draft of the canopy has been installed. Think I’m gonna go with a different paint though. 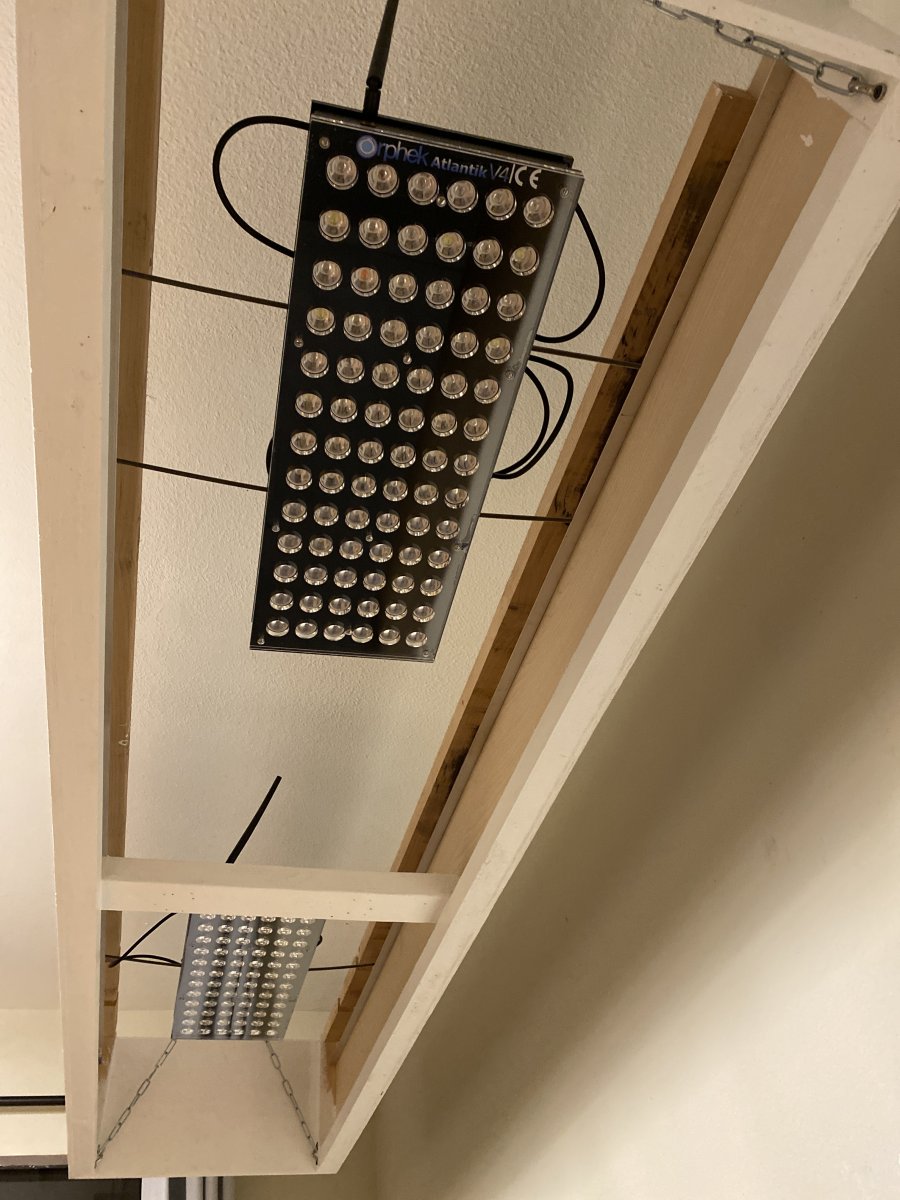 Orpheks installed. Need to beef up the mounting hardware, it’s sagging a bit as you can see. Easy to do and not in any danger right now. Just glad the idea works! 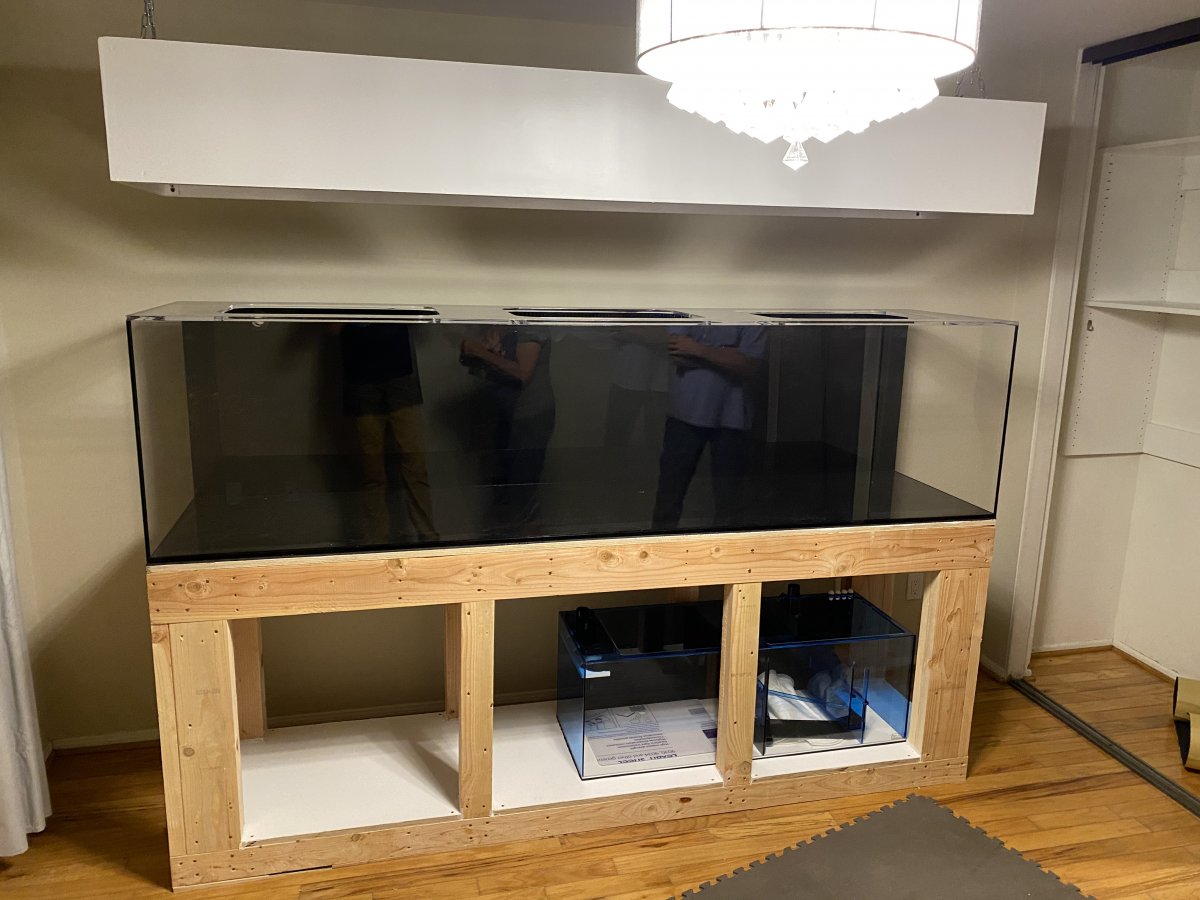 Well I was planning on having water in it by now but I had a pretty rough Christmas break and needed a few days to get my head back on straight so I could focus on the tank. Sort of lost all my motivation but I'm getting it back now. Nothing like a good project to help move your head along. Today is plumbing day. I've never plumbed a single thing before, unless you count installing a new shower head!

So far I've managed to spill primer everywhere, stain my pipes, make a dozen bad cuts, and I'm pretty sure I got some kind of weird high from the cement. It's getting better though and I hope to be done plumbing by tonight! 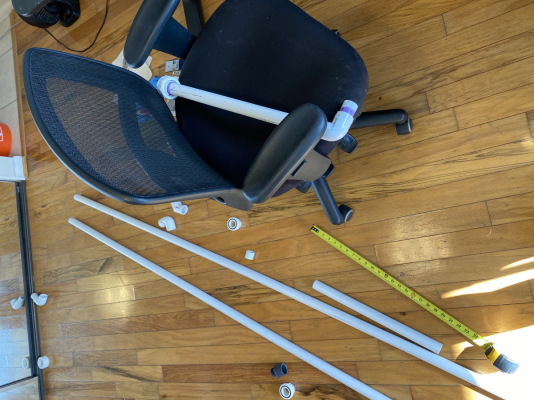 Oh, and why not start adding water since it's gonna take 4 days anyways 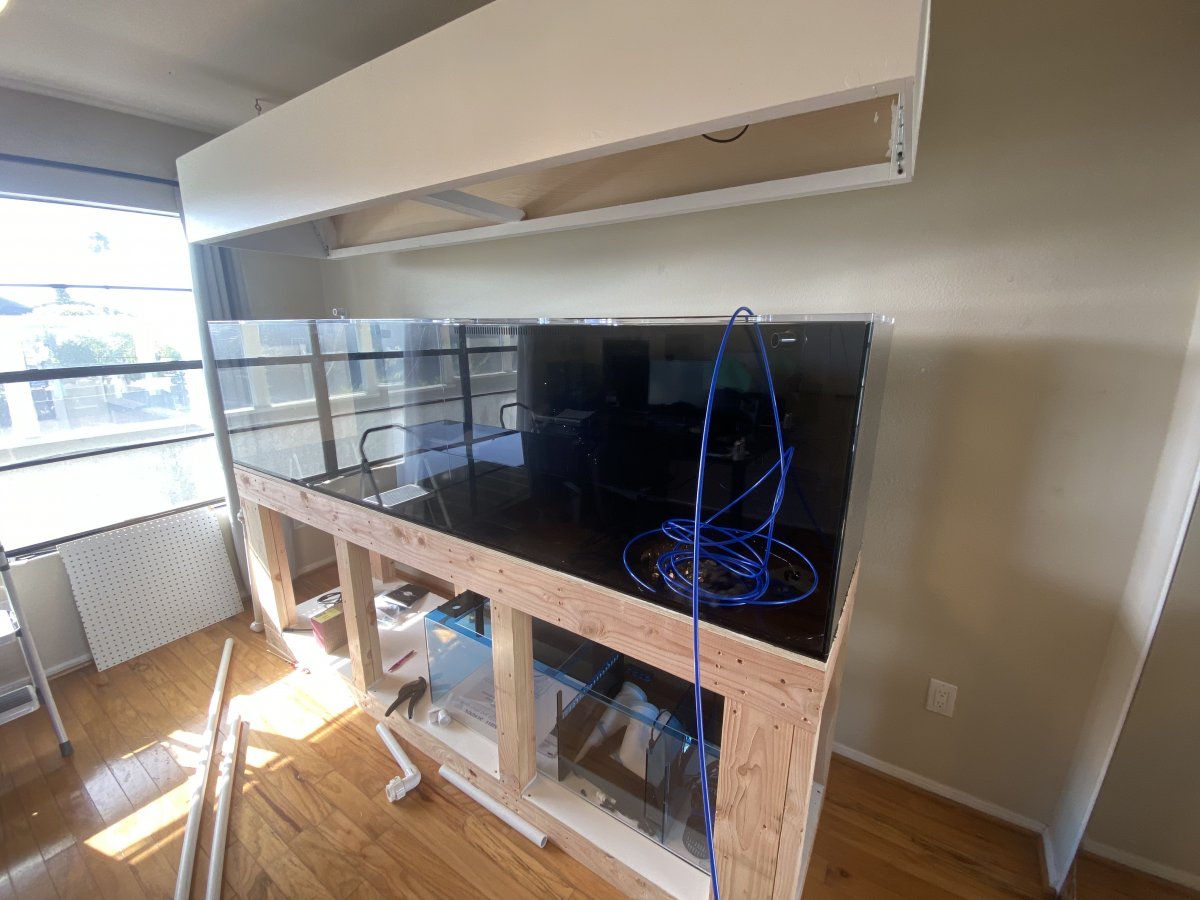 As a reminder, the canopy is a rough draft hence the bad paint job.
OP

I am so mad hahaha 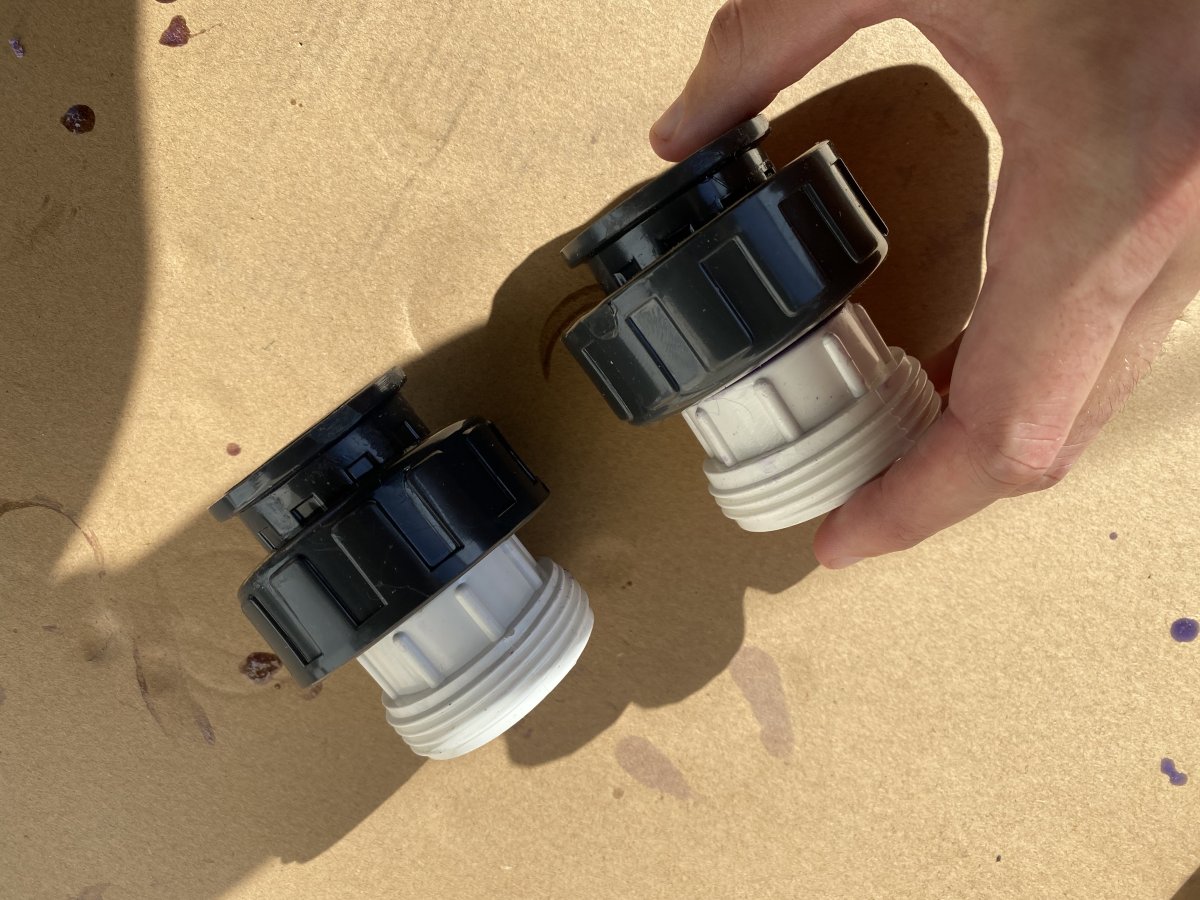 I am so mad hahaha

I did exactly this! It got launched down the garden

this one is easily fixed at least. (Collar on wrong side of pipe hangar) 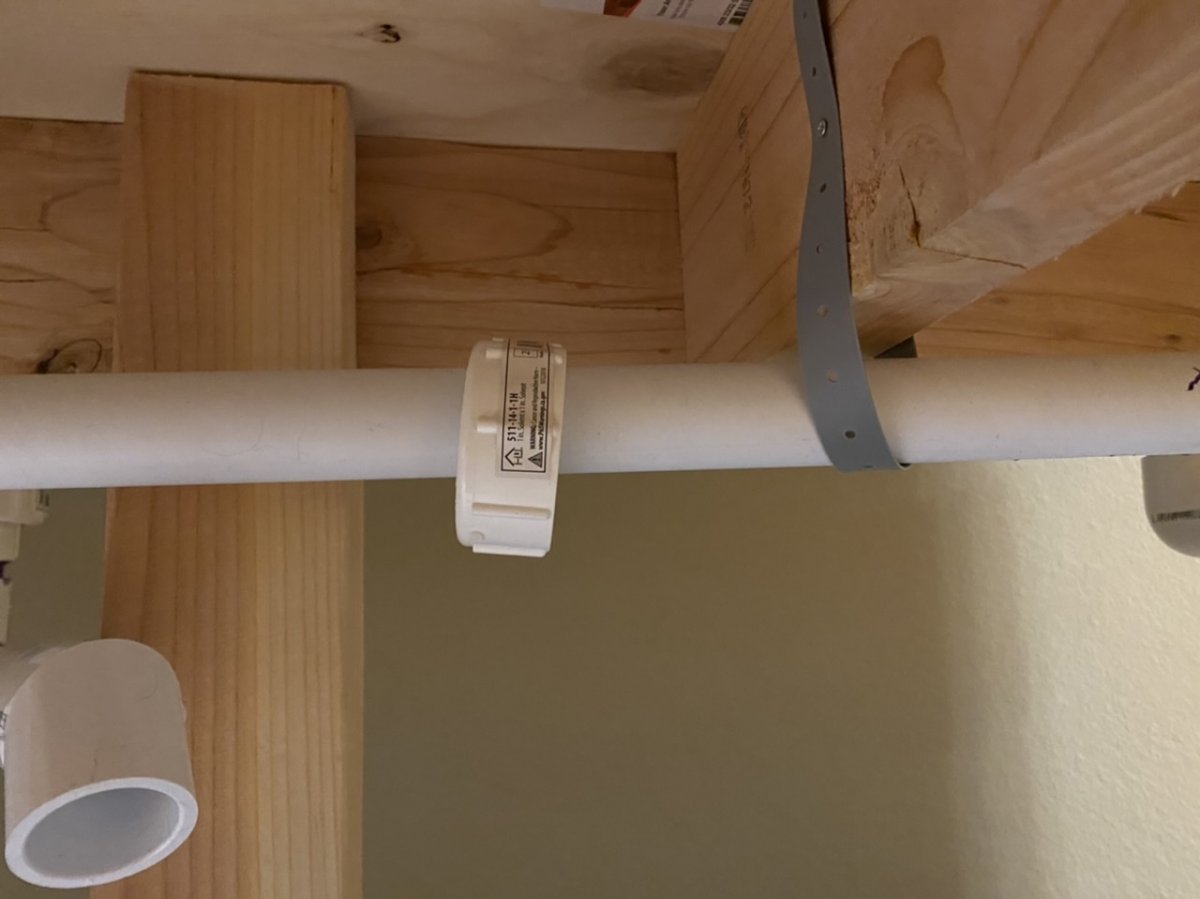