I have started cycling my new reef tank and have a question. I am using Dr Tim's bacteria and ammonia and dosed according to the instructions. My question is am I supposed to keep dosing ammonia after levels start to go down? The way I read the instructions I think I'm only supposed to do one dose and keep testing for ammonia and nitrite. I'm asking because I'm wondering if the bacteria that convert the ammonia start to die off after the ammonia is a 0 while I'm waiting for the nitrite to come down? I hope this isn't a dumb question.

epetrillo said:
I have started cycling my new reef tank and have a question. I am using Dr Tim's bacteria and ammonia and dosed according to the instructions. My question is am I supposed to keep dosing ammonia after levels start to go down? The way I read the instructions I think I'm only supposed to do one dose and keep testing for ammonia and nitrite. I'm asking because I'm wondering if the bacteria that convert the ammonia start to die off after the ammonia is a 0 while I'm waiting for the nitrite to come down? I hope this isn't a dumb question.
Click to expand...

It's not at all a dumb question, microbiology is fascinating after all. ^_^

So the idea of dosing ammonia is that it is an energy source for the nitrifiers, which can rely on it to constantly reproduce and increase in numbers. Dr. Tim's method is specifically to ensure enough has reproduced that there is an (excess) capacity to handle any amount of ammonia expected to be produced by a full tank stock. Here's his fuller guide, which details what you need to do: https://www.drtimsaquatics.com/resources/fishless-cycling/.

Long story short though, you don't have to worry about nitrifiers being ammonia-starved while waiting for nitrite to come down. Two reasons - 1. many nitrifiers utilize both ammonia and nitrite as energy sources, so basically they would just switch from ammonia (and nitrite) to rely just on nitrite for respiration and that's fine, but also 2. so far evidence points towards nitrifiers generally can go for a long time ammonia-starved. Like months. So a few days or even weeks will not cause any issues at all.

This process can be pretty confusing, so I made an easy-to-follow chart that should help keep track more easily. Quick note, a lot of people will come in to say nitrite does not matter to marine fish, so you should not need to fret about it. That is generally practically true. More precisely, it takes a very high amount of nitrite (like at least 100ppm or more) to be lethal to marine fish, and for ocellaris clownfish, it has only been recommended to keep nitrite under 25ppm. As you can imagine, these are really, really high numbers which you are unlikely to reach, so yeah generally it's not a concern. But I like to just give out the warnings because I think it's good for everyone to have the full knowledge of this, not just the bare minimum they'd need. 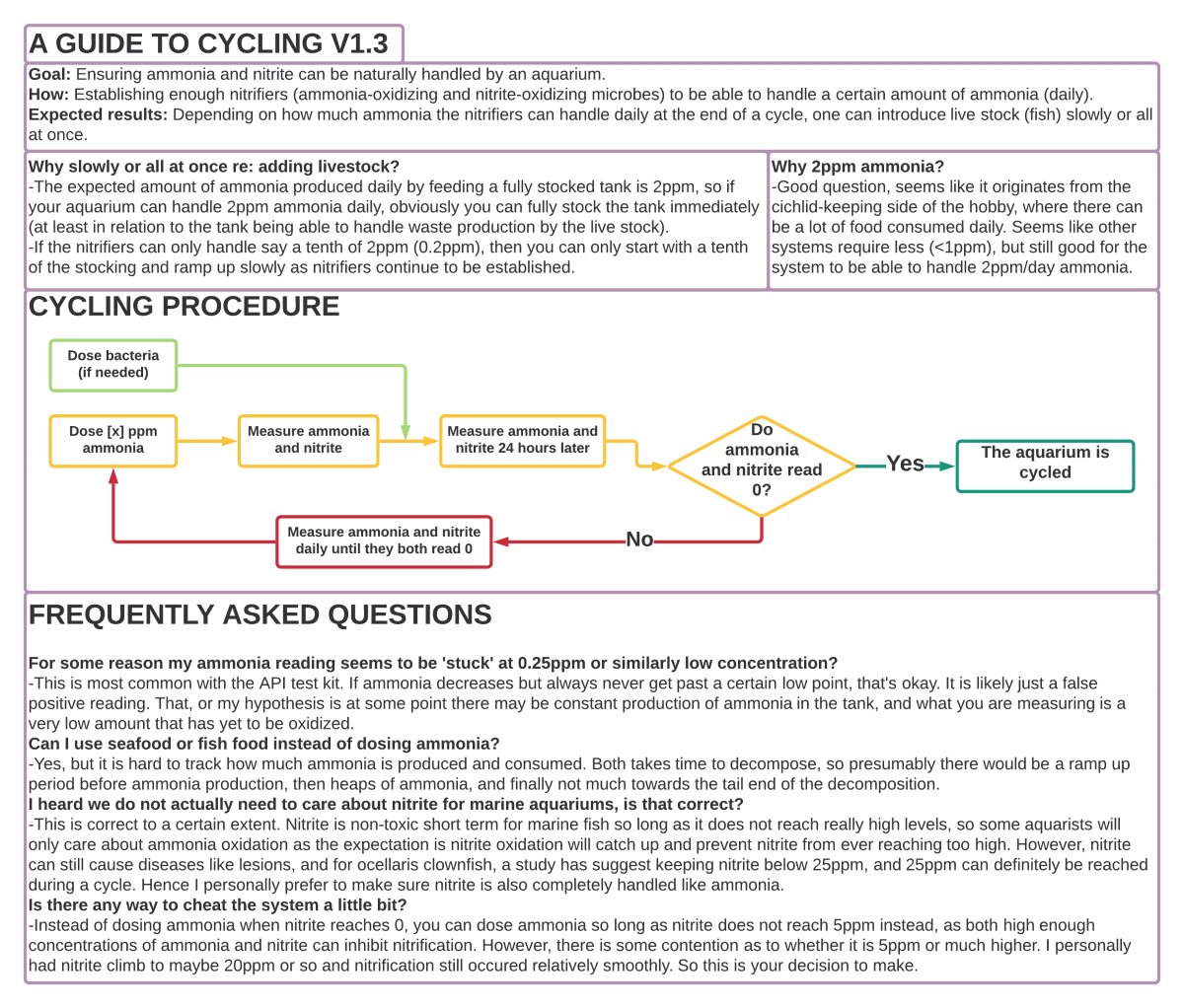 Thank you for helping. So if I understand correctly, my ammonia dropped to 0 two days ago and my nitrite is coming down now so I can add a pair of small clown fish when my nitrite drops to 0 as long as I take it slow after that? My tank is about 53 gallon total including sump.

I would say (and I am no pro) that you should dose 2ppm ammonia and see how long it takes to go back to 0. If it is within 24-36hrs, go for it. Unless of course your original post was after dosing a second time.
OP

No I've only dosed once. I didn't mean to but apparently threw out my bottle of Dr tims ammonia so it will be a couple of days before I can try that test.

If you have time, search for threads from @brandon429 he has some solid info on cycling.

epetrillo said:
Thank you for helping. So if I understand correctly, my ammonia dropped to 0 two days ago and my nitrite is coming down now so I can add a pair of small clown fish when my nitrite drops to 0 as long as I take it slow after that? My tank is about 53 gallon total including sump.
Click to expand...

It really depends on how fast it took for your ammonia to drop to 0 after dosing 2ppm ammonia. If it took 2 months for 2ppm to drop to 0, then that's not a very fast rate at all.

I checked your post history and seems like you started cycling about ten days ago? If ammonia dropped to 0 two days ago, that means it took about 2 weeks or so, the ammonia consumption rate was on average 0.286 ppm/day, though of course the expectation is as time goes on the consumption rate is higher and higher, so would be higher than that, but how much higher I have zero idea.

With that said, if you plan to stock slow and all that jazz, yes you should be fine to add two clownfish to 53 gallons of water with that rate of ammonia consumption. @taricha and I had a chat about this, and realistically ammonia production rates from just feeding is pretty low, even with heavy feeding. One of the reasons why I still suggest 2ppm/day, is not just to be 'extra careful', but also to ensure the nitrification capacity of your tank can handle spikes in ammonia, in the event of something like a death of a fish if you happen to get one that was sick or just bad quality or whatever.

Got him all covered here, he’s done

How to unstick any seemingly stuck cycle

If you are concerned about knowing the start date for your reef aquarium post here and we will name the date you can begin carrying a bioload plus its feed plus its generated waste. The whole point of the thread is that you think your cycle is stuck because some cheap test kits said so, and it...

seeing ammonia go down is all we need to know, given that he added bottle bac people successfully use during fish in cycles with no wait time. The degree of ammonia added is orders above what’s needed to cycle so he’s done per that thread.

we can see in those examples that directly match his cycle that no bacteria will ever starve, in any reef setting and we can also plainly see no cycle has ever stalled from a bottle there. We can easily see there above any arrangement we create is going to cycle just fine. Do not own or use a nitrite test kit in reefing, #1 takeaway from the patterns there
Last edited: Jun 30, 2021

His example of being able to move down large initial doses of ammonia added is the testimony to the power of bottle bac, and its quickness.
we do not need to dose it more than once

the initial drop wasn't a lark we need to re prove.


imagine the light light comparative bioload from two clowns in a starting nano, it can easily move that down instantly too.

this is why 100% of the examples we can search for about fish in cycles only show them working, I cannot find a fail of gray water and all dead fish and bad smell within two days of start. that's a dead cycle tank. Fish-in cycles were never, ever burning fish with ammonia or they wouldnt be feeding and acting normally as 100% of searchable examples show.


every example of a stuck cycle I can find, or a bad fish-in cycle involves merely api or red sea and no TAN conversion per paper instructions on the kit. I have never seen seneye prove a stuck cycle not once, not ever. There are now thousands of seneye reports online now for patterning to verify

The sole risk in cycling in 2021 is fish disease. any arrangement you attempt for ammonia control is going to work, they just are ready on different predetermined dates depending on boosters used. A completely 100% unassisted cycle, dry rocks and water only and time, will be fully self-cycled off natural inputs within 60 days. tested twice already. if anyone else is down for the test lets do more for patterning. That link above shows that even if his ammonia didnt move down quickly initially, it's still cycled after just a few day's wait (after a big water change to export the jolt large initial dose of ammonia)

Sounds crazy aware, but the very first example link among 100 was chosen because we see that action and track a nano reef out to carrying fish and anemone not long after. waiting for the initial wastewater to clear out (on API, its not really taking that long on seneye) is not required in cycling, its directly linked first read.
Last edited: Jun 30, 2021