Johnb65 said:
Looks great and I’m loving all the shapes coming to form. Your water also looks pretty clear. I’m struggling with it a little as my sand seems to hold so much detritus and all sorts even with good flow it seems it’s all not going through the filter. I’ve changed a few things today so hopefully see it clearer.
I’ve still only got 2 clowns and a pulsing Xenia which I love even with the potential take over 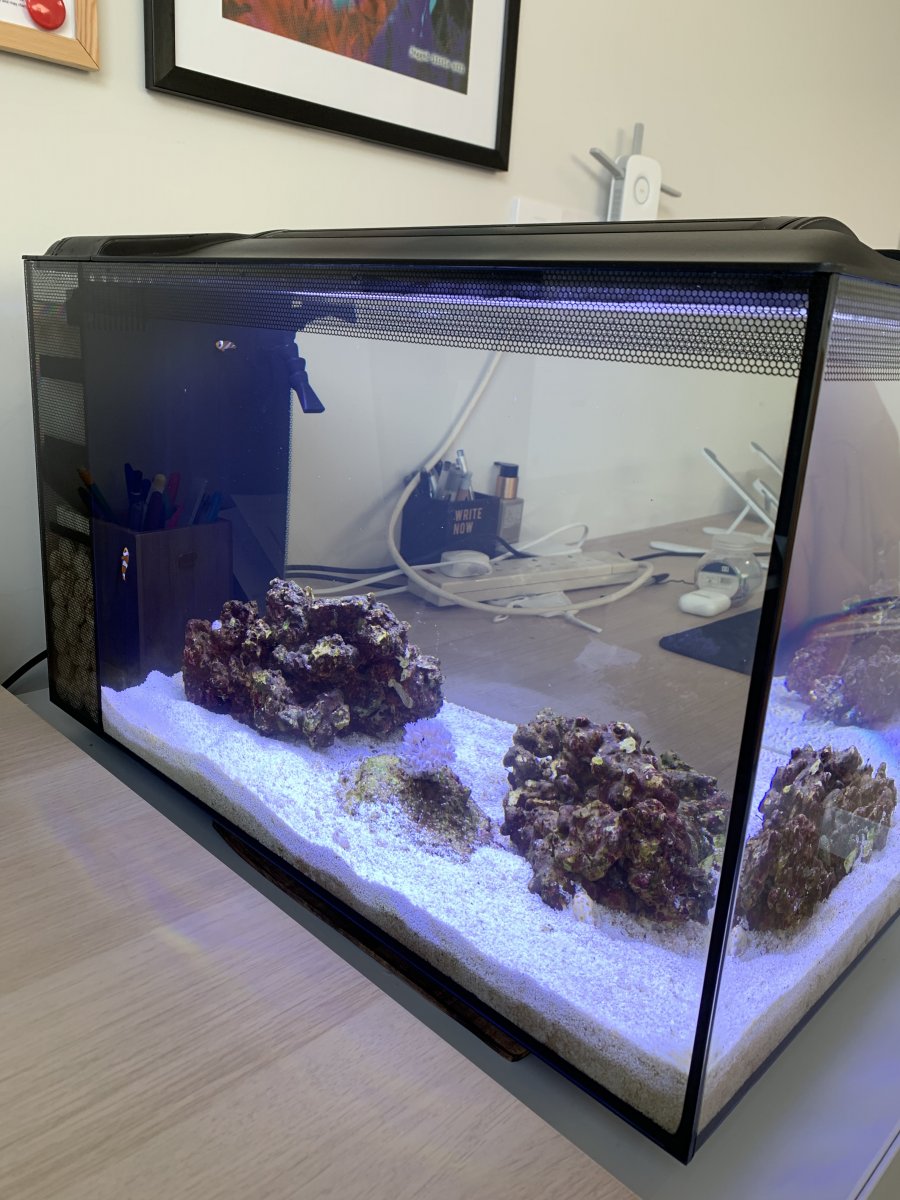 Have you upgraded the return pump and you need a powerhead of some sort in there, depending on what corals you want these Evos like good flow?

Johnb65 said:
Looks great and I’m loving all the shapes coming to form. Your water also looks pretty clear. I’m struggling with it a little as my sand seems to hold so much detritus and all sorts even with good flow it seems it’s all not going through the filter. I’ve changed a few things today so hopefully see it clearer.
I’ve still only got 2 clowns and a pulsing Xenia which I love even with the potential take over

Thanks! Yours looks really good to me (pretty clear). What are you using for filter media (still activated carbon and bio balls)? A little more flow from either the pump or a powerhead could help a bit. But it really looks pretty good.

I just switched about 3 weeks ago from activated carbon to Chemi Pure Blue (2x nano packets). Carbon is great for keeping water clear, but the Chemi Pure is even better (this is the first time I've used it) and it allegedly lasts longer. The down side is that I've notice my nitrates and phosphates start to dip a bit and I've seen what I believe to be some hints of dinos over the past few weeks. I'm trying to stabilize those numbers a bit by feeding a little extra and cutting back on the water changes (still biweekly, but only about 10% to keep other params stable). I'm also manually removing the algae from the sand and glass and replacing the filter fiber more frequently. It's stable (even getting better), but it's alarming as I'd hate to have a big dino outbreak.

If I were to do do it over again, I'd only start with one nano packet. I'm not unconvinced that Chemi Pure Blue does its job so well that it destabilized my young tank a bit by causing a nutrient crash. I'll monitor it and post updates if the situation worsens. I'm going away for 3 days this weekend, so we'll see how it goes.

I like your clowns - how big are they? They look TINY in the pic (my clown is maybe 1.5 inches). I'm also a fan of Xenia and have some in my tank (under the big palythoas). I'm going to stick some to the back wall when it spreads a little more. I'd like to let the GSP and Xenia do battle up there. Maybe a monti cap in the middle, but we'll see.
OP

So I’ve had a little struggle with algae on the sand bed for the past few weeks. At first I thought it was another bout of diatoms. Then I thought it might be GHA as it was stringier. Then I was concerned it might be Dinos as it appears to worsen as the day went on and it was limited to the sand bed and po3 and no3 were reading zero/trace amounts.

But after further review, I’m really leaning toward GHA. I let a tuft of it grow out (I’ve been diligently manually removing every few days) and under 100% whites it looks like pretty standard GHA (pics below). I ordered a microscope which should arrive early next week and that should help me confirm and decide how to approach treating it beyond manual removal.

The big difference between the Dinos or GHA will be how I handle nutrients. If it’s GHA, I’ll dial back the feedings, add the Chemi Pure Blue back in (I took it out and am running Activated Carbon right now). The GHA could be consuming no3 and po3 leading to my low readings. If it’s Dino’s, I’m going to likely try to increase nutrients as most variants thrive in low nutrient environments. I’m hoping it’s GHA which is much easier to manage. 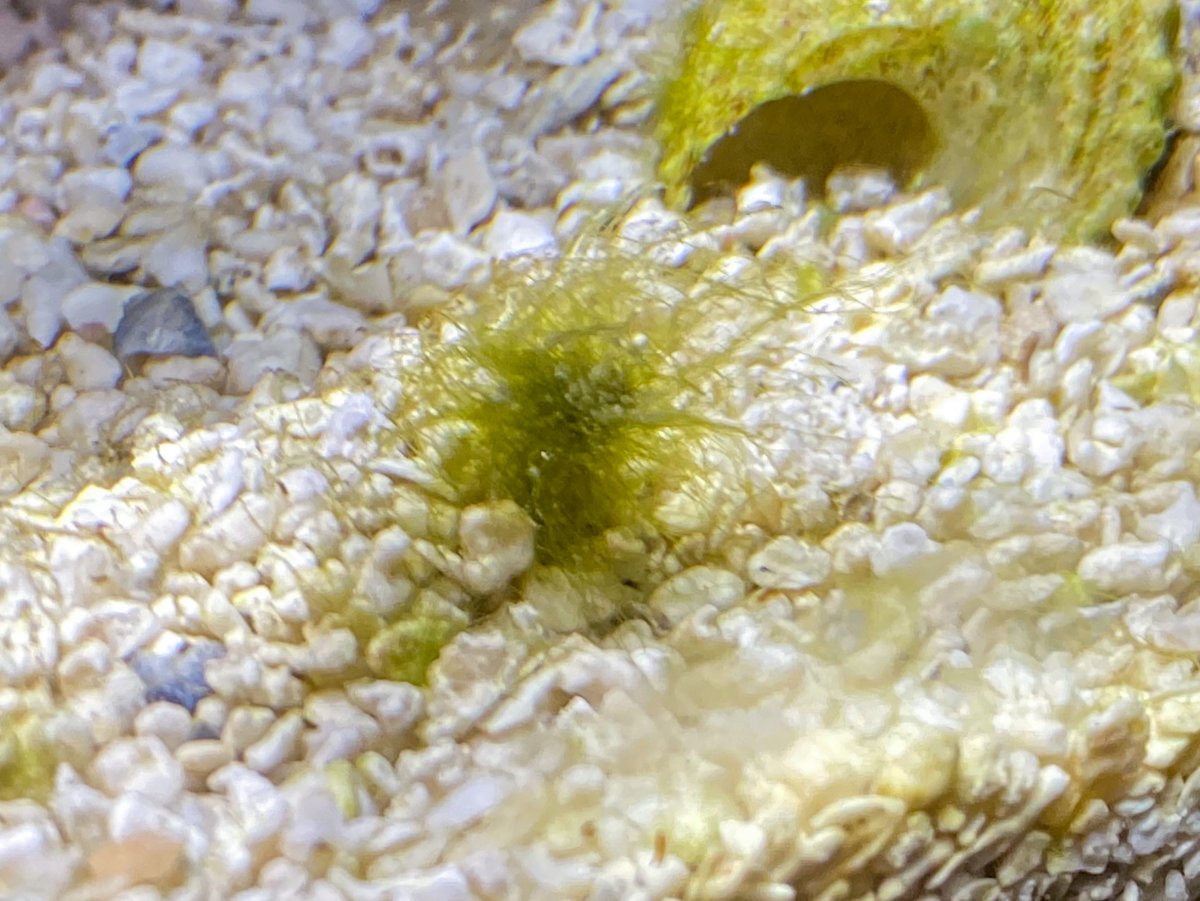 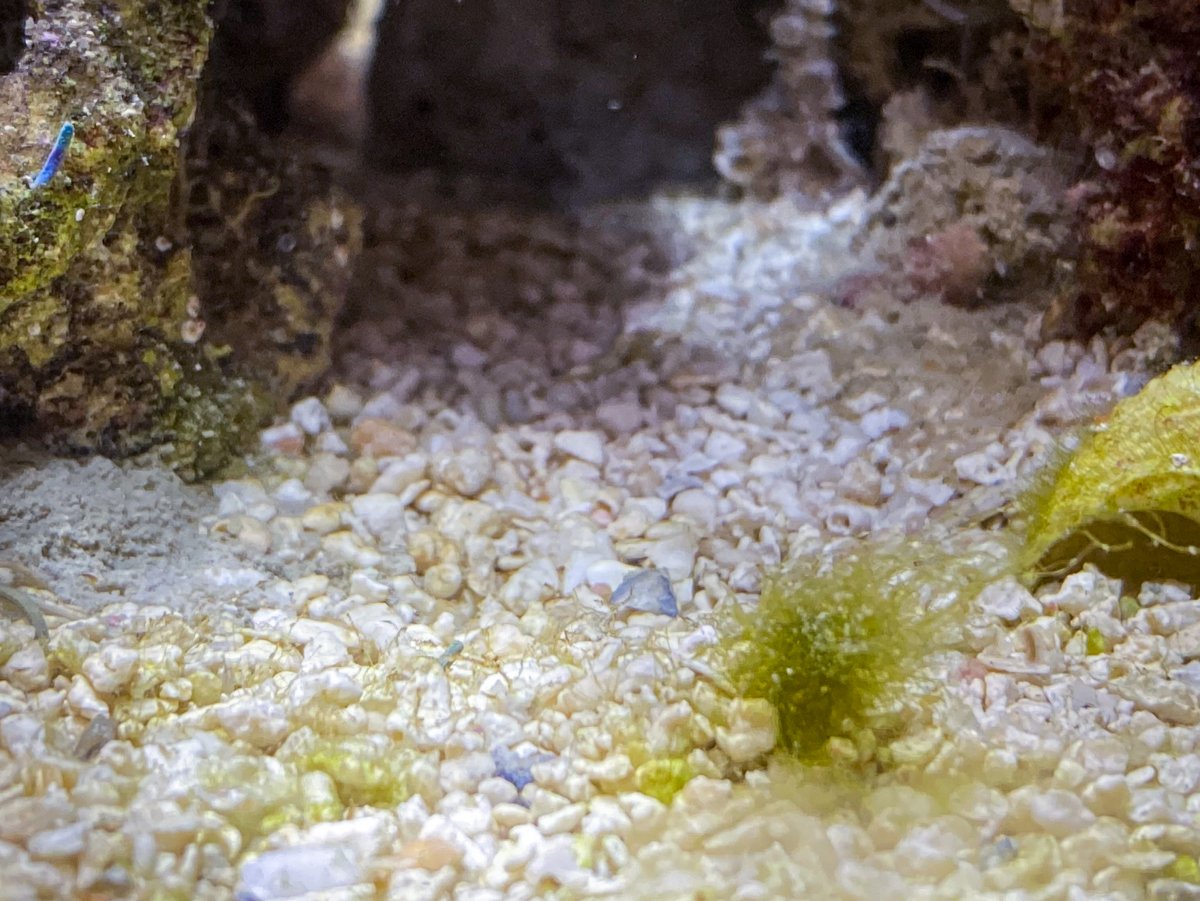 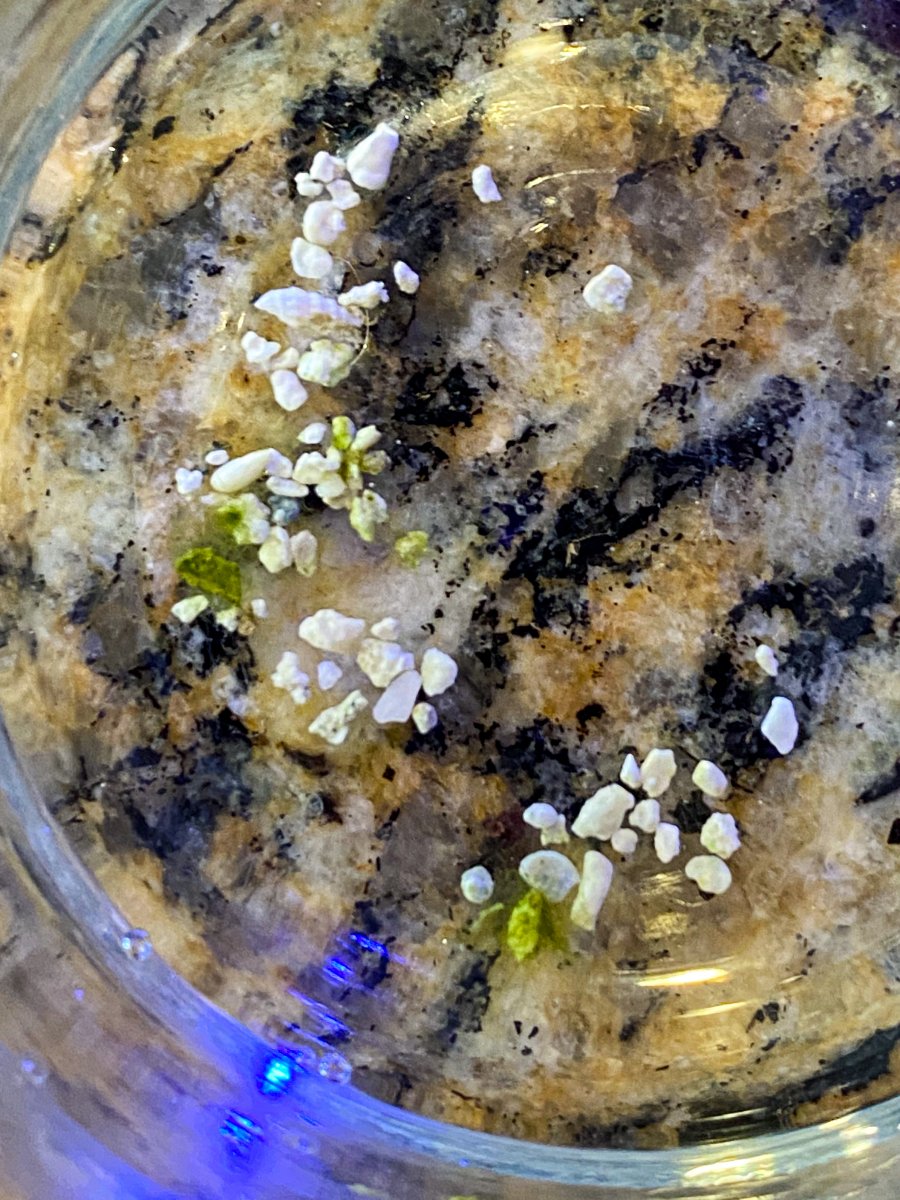 The last photo is my attempt at the strainer test for Dino’s/Cyano. This is what lead me to believe it’s GHA. In the strainer test you put a sample in a container with a lid, shake vigorously until the sample breaks up/dissolves in the water, strain through a paper towel into a clear container, then let it sit for an hour or so in sunlight. Dinos usually reconstitute on the new container, cyano does not (not as much anyway). Mine never broke apart when shaking. It retained It’s shape and clung to the small rock it was connected to. Combined with the very obvious resemblance to GHA, I feel like it’s likely not Dinos (or cyano). We should know for sure next week.
OP

I took a little video of the whole tank earlier this week:

I love the NSW ideal for the tank! I wish I was on the Atlantic side of FL. I don't think I would ever use the water here on the Gulf side. Definitely love this tank!

Green_Lantern said:
I love the NSW ideal for the tank! I wish I was on the Atlantic side of FL. I don't think I would ever use the water here on the Gulf side. Definitely love this tank!
Click to expand...

Thanks! What would your concern be about Gulf water? I would have assumed it’s better than where I’m collecting which is about 4 miles from downtown Boston. I would have guessed the Gulf is probably a closer representation of real reef water. I’m going to send some of my water out for an ICP analysis in the next few weeks.

Johnb65 said:
It is looking so good!!! Is that a green star polyp you have? Is so then I can’t wait for mine to cover rock like this.
How long is the tank running again??
Click to expand...

I appreciate it! It’s getting there (algae issue aside). It is GSP. I actually peeled the first little bits off the rock and stuck them to the back wall this past week. I want it to cover the whole back wall eventually. The stuff grows fast. The rocks I have are slightly separated from neighbors so it doesn’t take over. I put water in the tank on August 4th. So about 3.5 months now. In fairness, I got the GSP rocks for free from another reefer who was breaking down his 120. I didn’t grow them out to this extent myself.
OP

Grabbed 2 new additions this weekend. A local reefer was clearing some room, so who am I to say no. 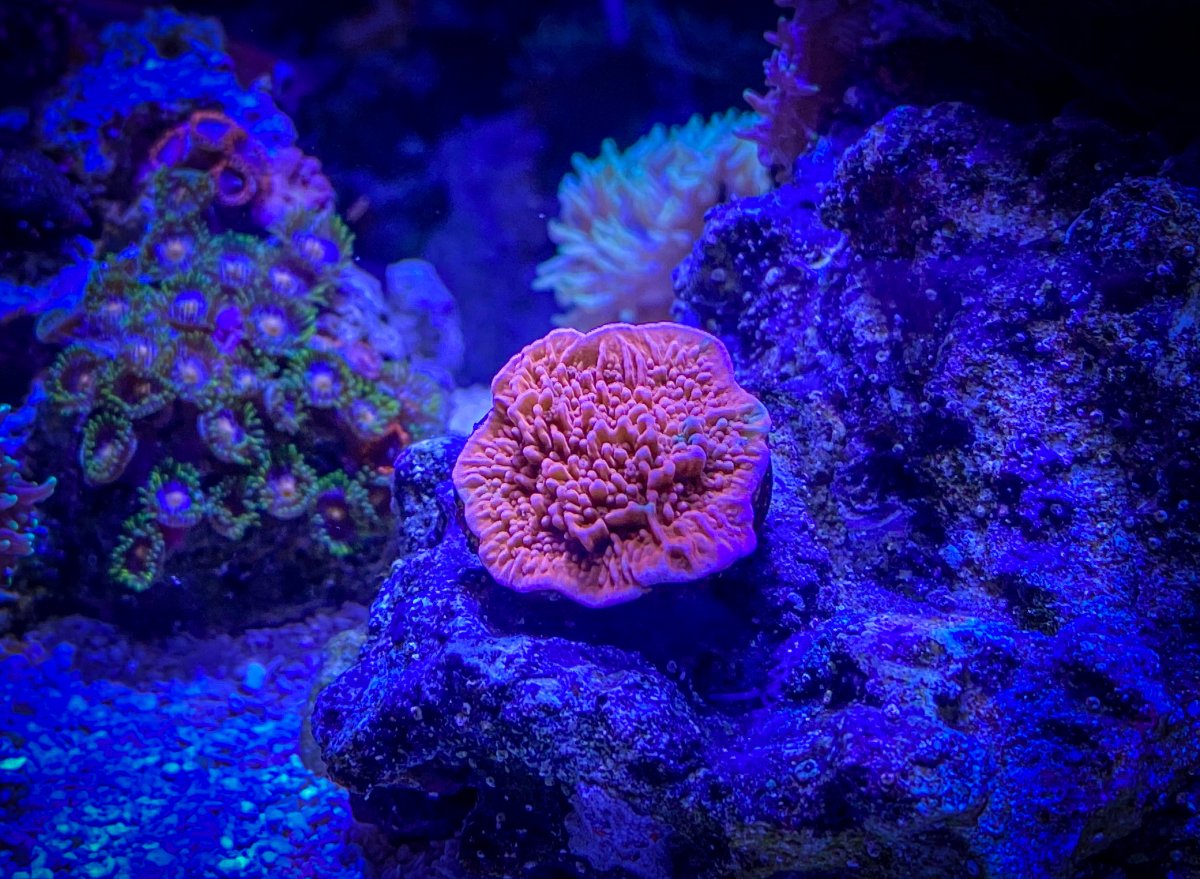 Green birdsnest (this wasn’t a 2 for 1… I broke a branch in transit and decided to glue it anyway): 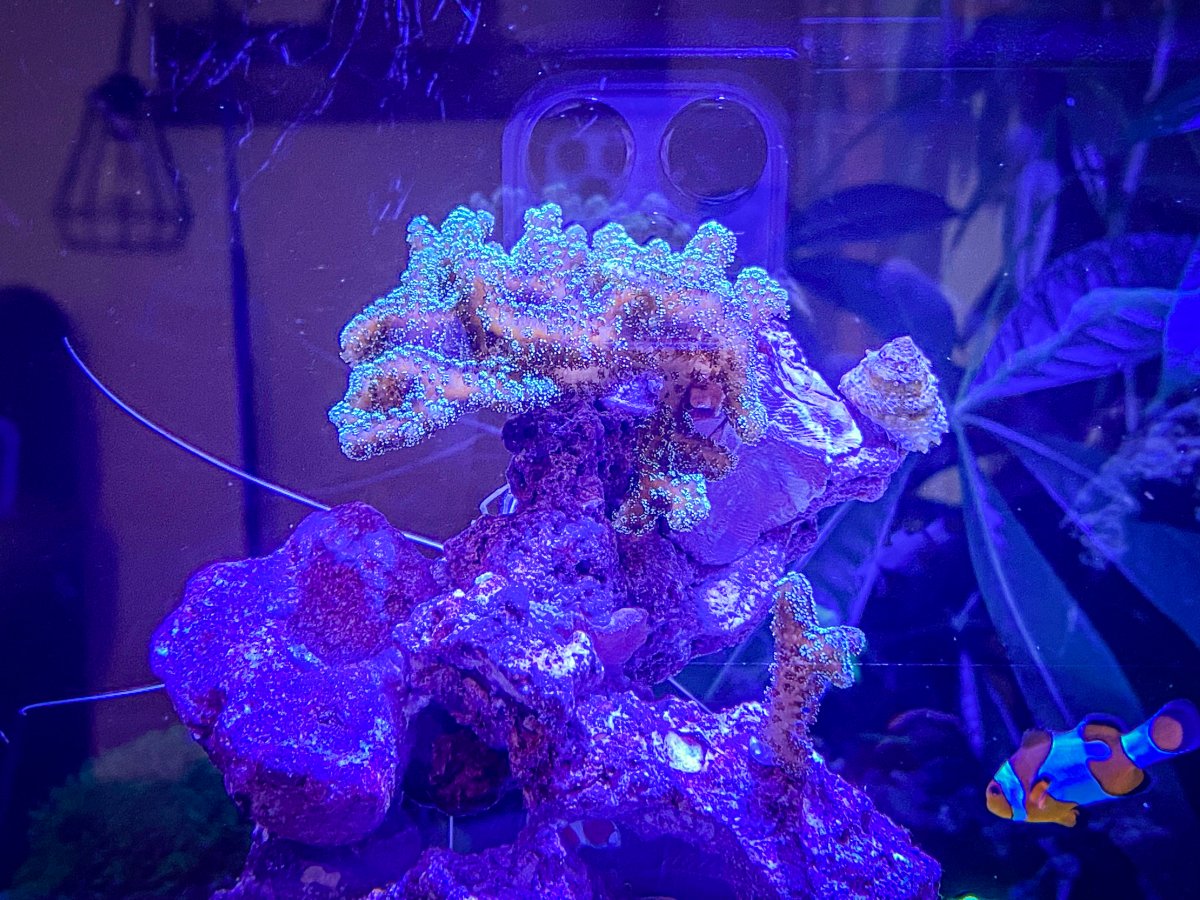 Also, when your fish are pigs and see you approach the tank to take a photo, this happens making it tough to get a shot without them: 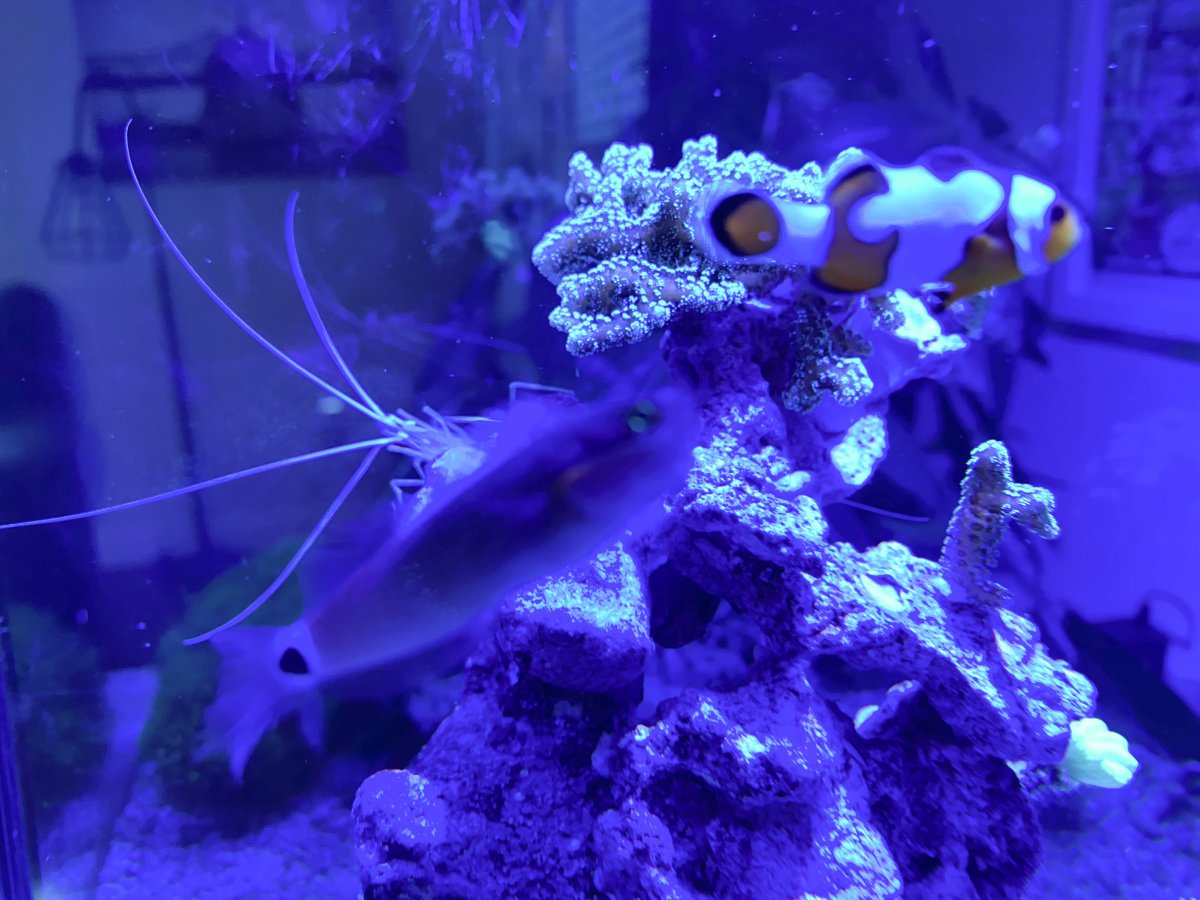 Update on the algae. I looked under the microscope and it's definitely not dinos. Looks (to me) like GHA (pretty similar to photos I've seen in some other forums) with some diatoms in the mix.

The good news is that it's definitely started to slow down. For the past three weeks I had been stirring and manually removing every single day. There were some dinos in there (along with the GHA and probably diatoms), I'm certain of it. There was some stringy brown slime in the rear chambers, on my filter floss, and a little in the tank (complete with bubbles on it). It's no longer there. Early last week after reading zeros for po3 and no3, I pulled my Chemi Pure Blue, replaced it with good ol' GAC and started reading po3 and no3 within two days. There is no sign of dinos at this point and the GHA isn't growing like it was. Diatoms are steady too - I haven't touched the sand bed since Friday and they're not any worse.

I don't see any reason to change things at the moment. I'm due for a water change, but I'm not collecting (this is natural sea water that I collect in Winthrop) again until we've had a few days with no rain. So I'm guessing that'll likely wait until this weekend or early next week. I'd also say that Chemi Pure Blue is probably too effective for a new tank. Especially a nano like this one. I'm absolutely amazed at how quickly my nutrients were zeroed after starting it. So for the foreseeable future, I'll stick to the GAC.

FTS from today (tough to tell but the sand looks a LOT better. Especially since it’s relatively untouched: 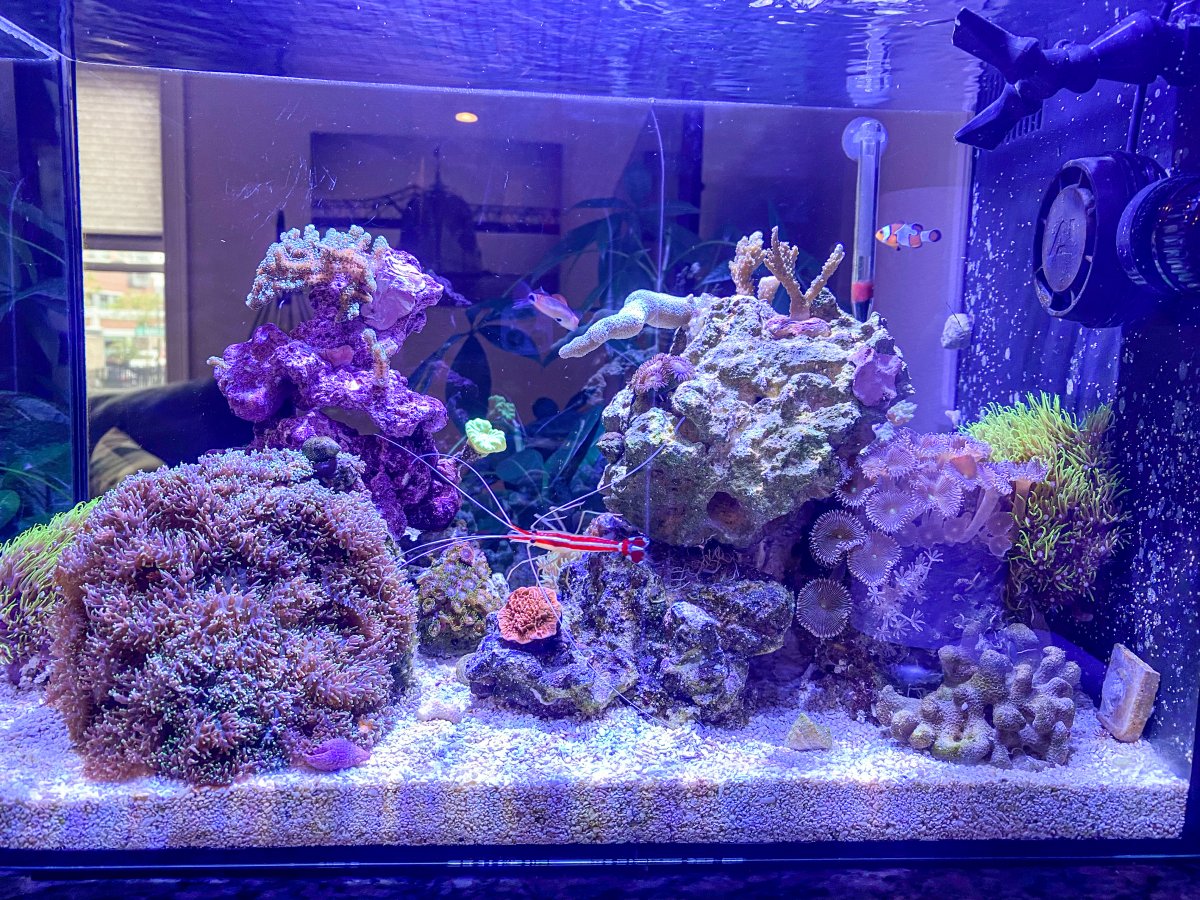 Those "frilly mushrooms" will take over very quick almost as fast as that gsp you got in there!

hexumjunkie said:
Those "frilly mushrooms" will take over very quick almost as fast as that gsp you got in there!
Click to expand...

Yeah, that was the first rock I got (from another reefer) to cycle the tank. They've spread fast. Right now that rock has a little space between it and its neighbors. But it will likely be replaced eventually. The GSP will likely be gone (except for the bit on the back wall) within the week. I like the movement, but I don't want it taking over.
OP

A quick video from Lunch on Monday:

I’ve made a few additions over the past several weeks. I added this Acro Tort thanks to a legendary local reefer who has a quarter of a century old tank and several Acro variants named after him.

I also added a 3rd (and likely final) fish - an Orchid Dottyback. They can be aggressive and to be honest, I almost decided to rehome it on day one (I have another thread on that roller coaster). By my fiancée pushed me to wait the weekend and things settled down quickly. The clown and dotty don’t even acknowledge each other. The blenny and dotty were flexing a little the first few days but now seem to be fine. I’ll be keeping an eye on them, but I hope it works. The dottyback is a beautiful fish with a great personality. 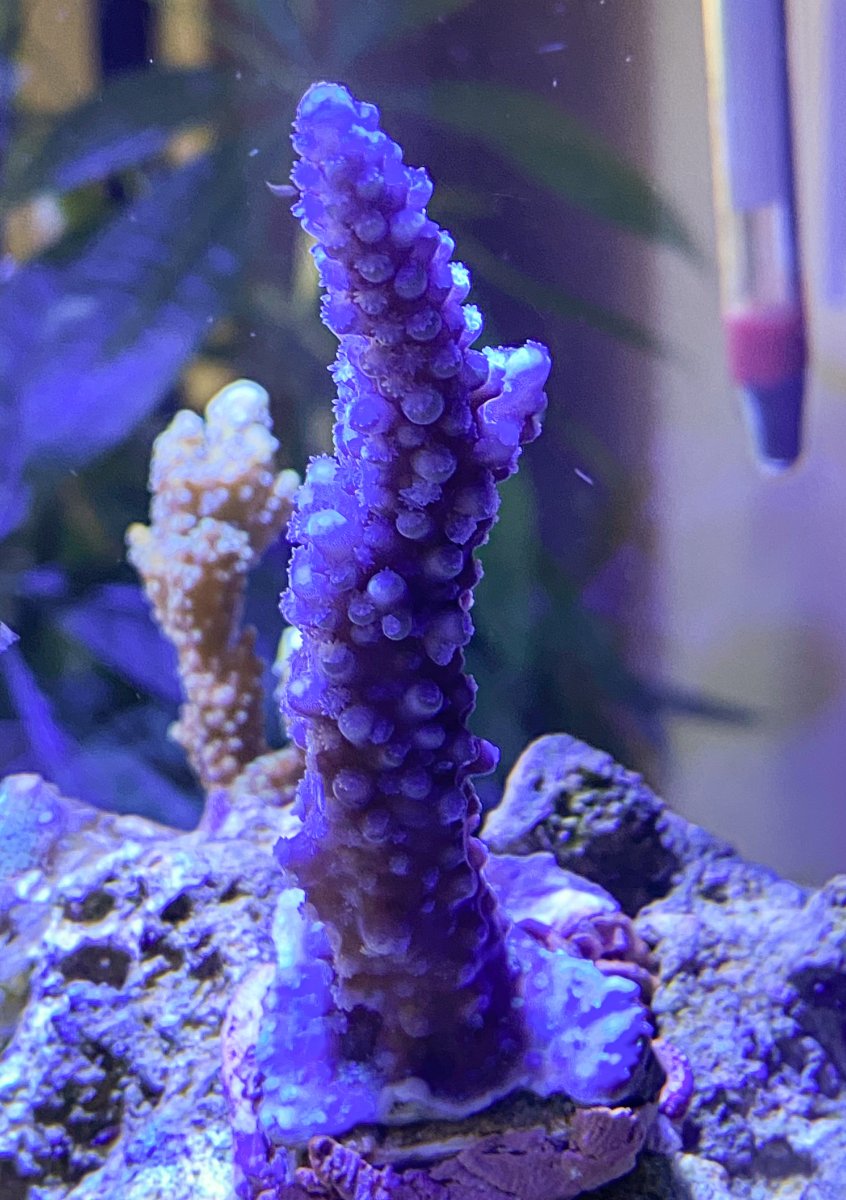 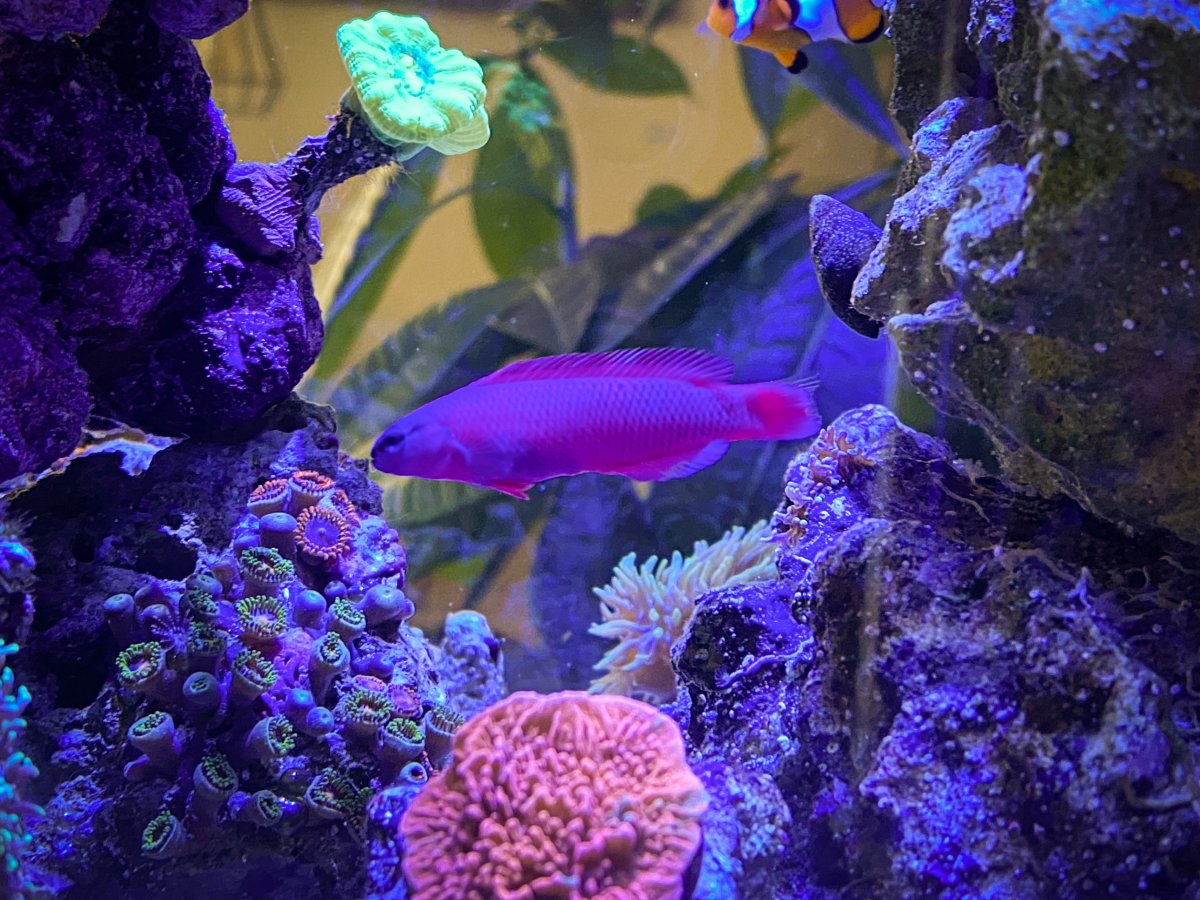 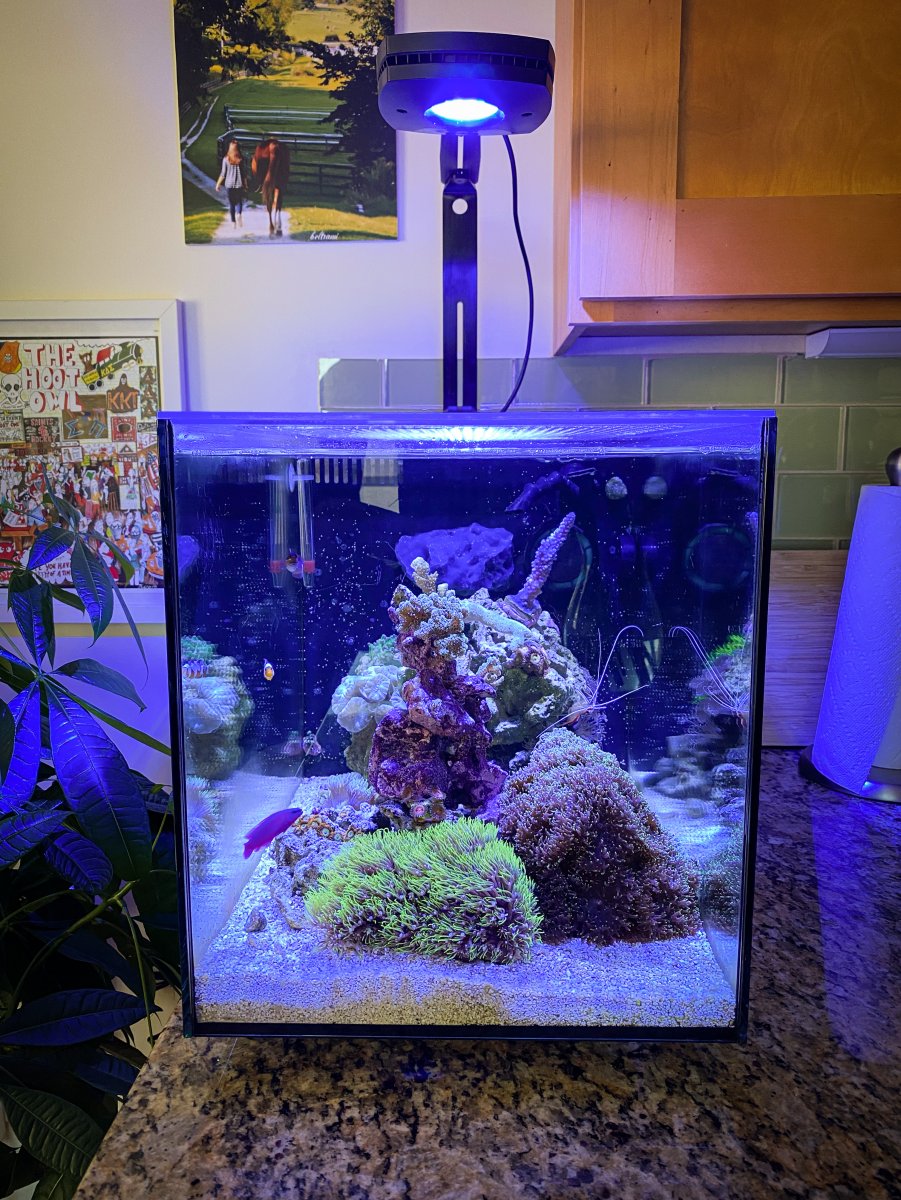 I don’t know why I’m seeing more today than normal, but there are a bunch of these on my filter floss. I believe they’re some sort of copepod. Maybe even little mysis. But they’re definitely a good source: 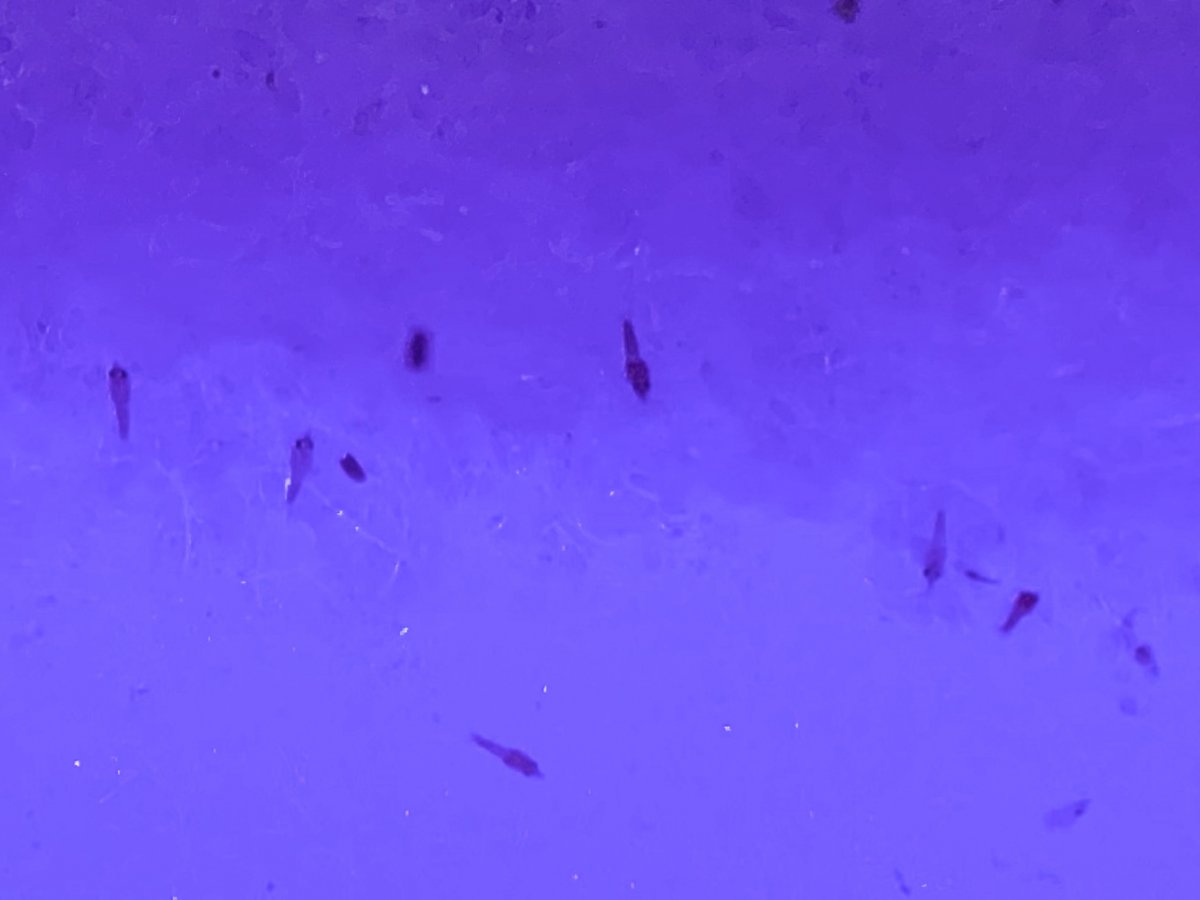 a video of them moving:

So it begins… I had strategically placed some GSP up against the back wall to get it to grow there and it finally took. These mats are stuck there and spreading pretty good already. I can’t wait until it fills in. 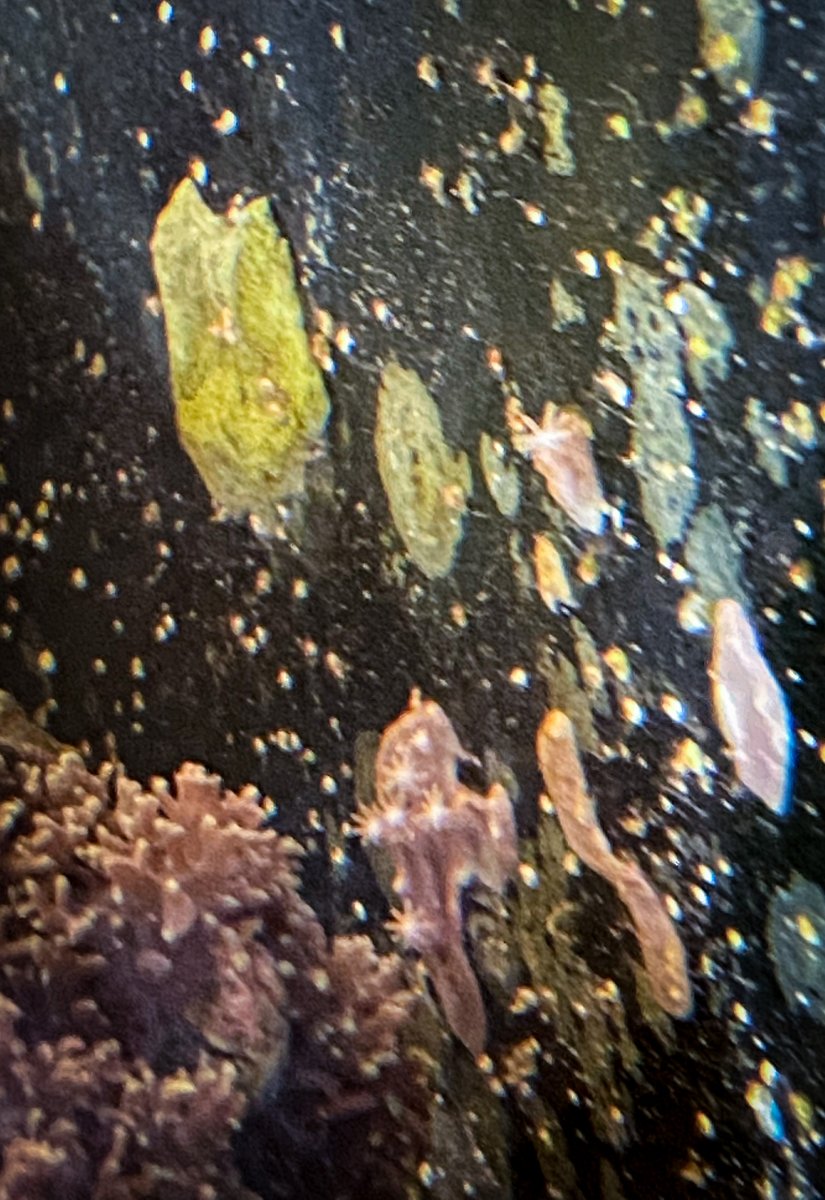 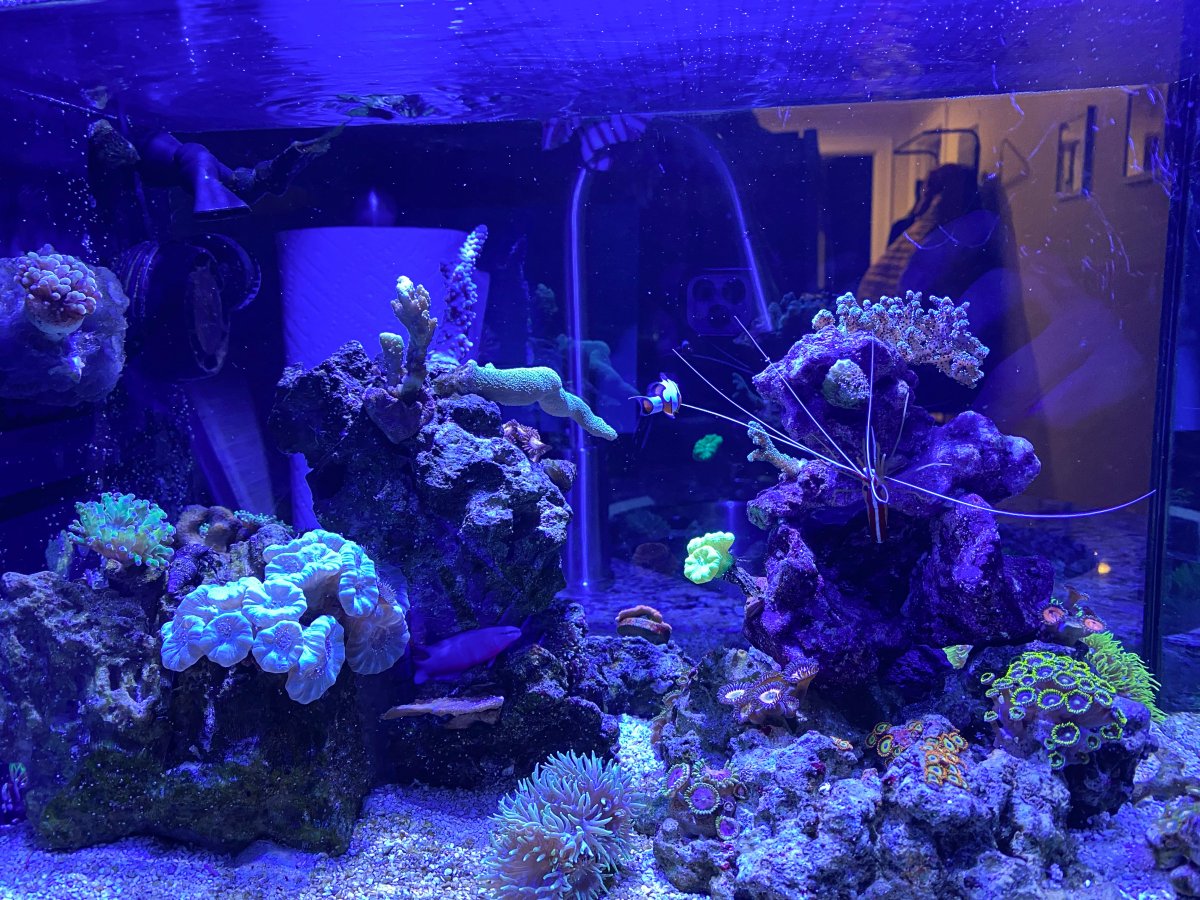 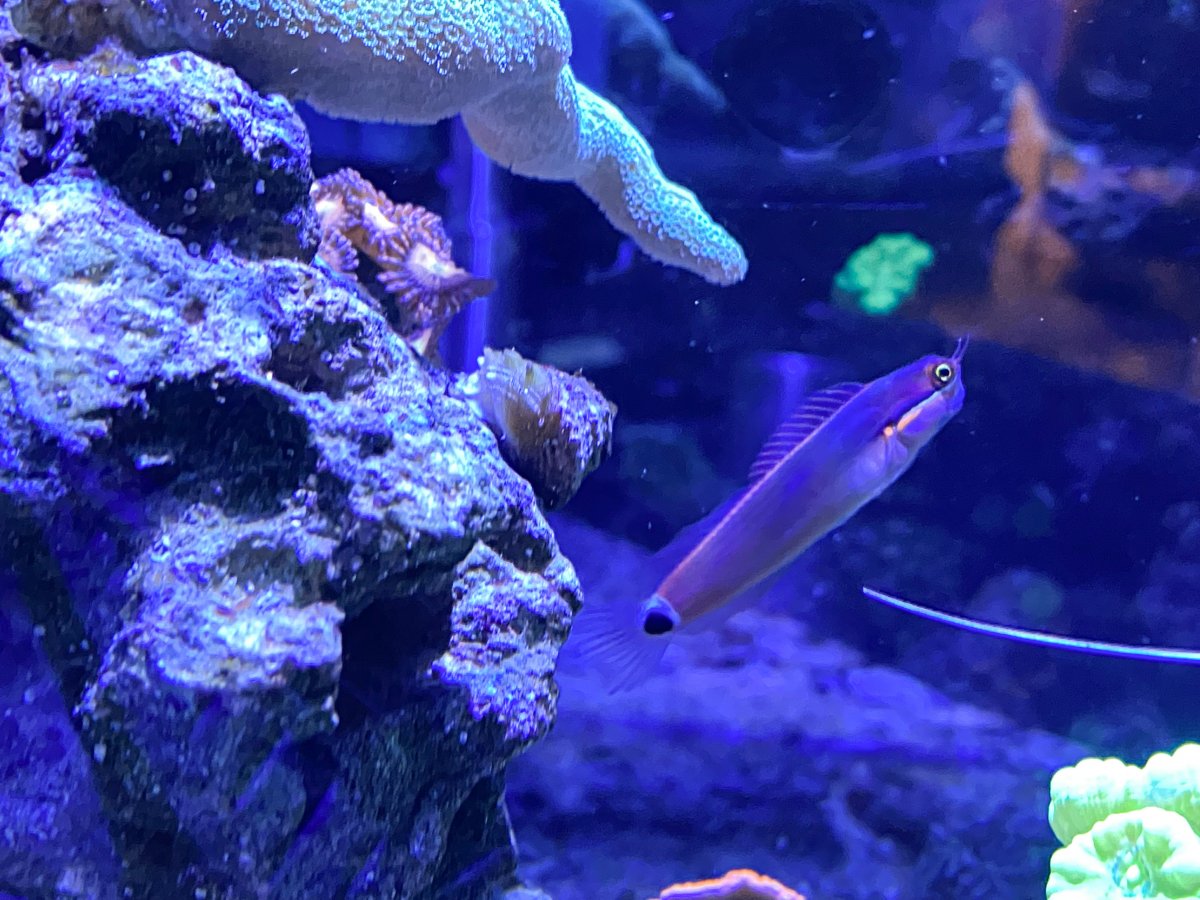 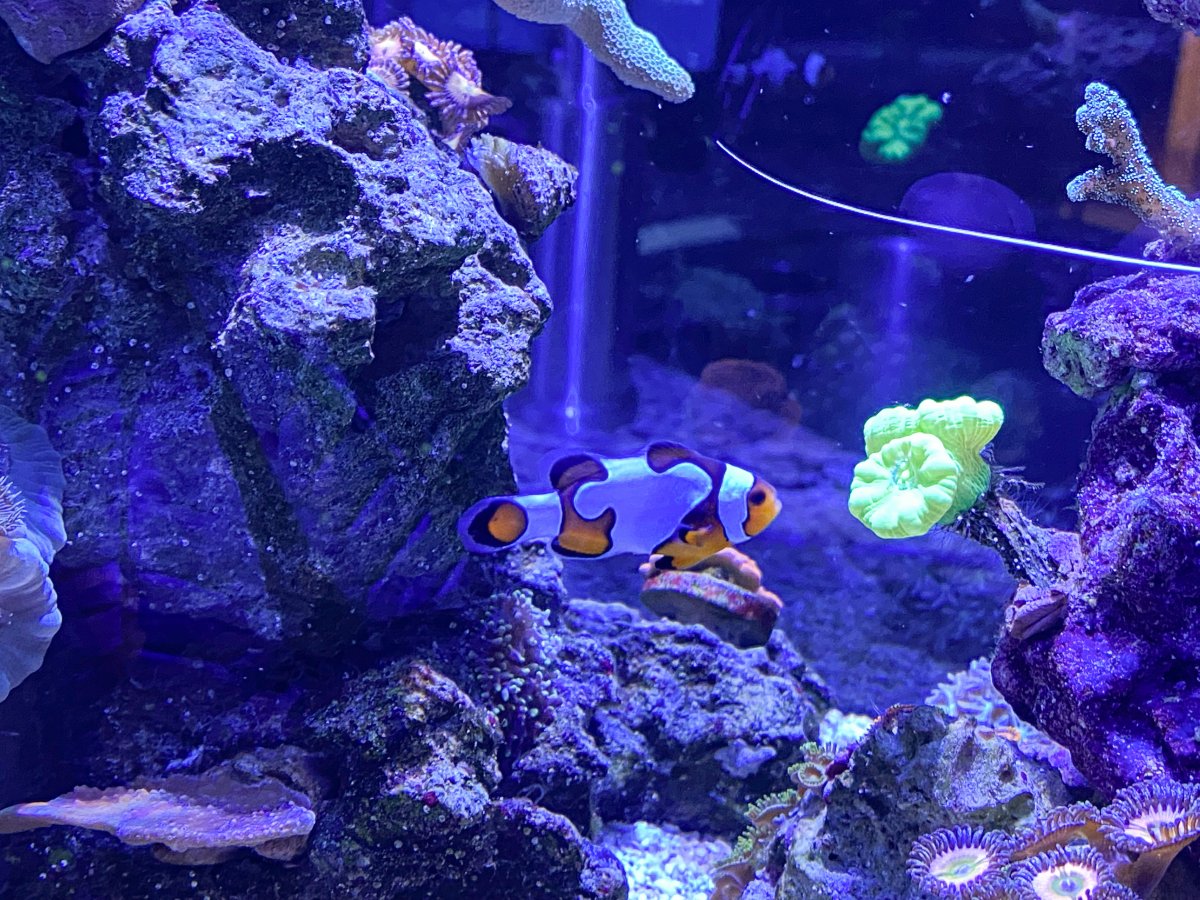 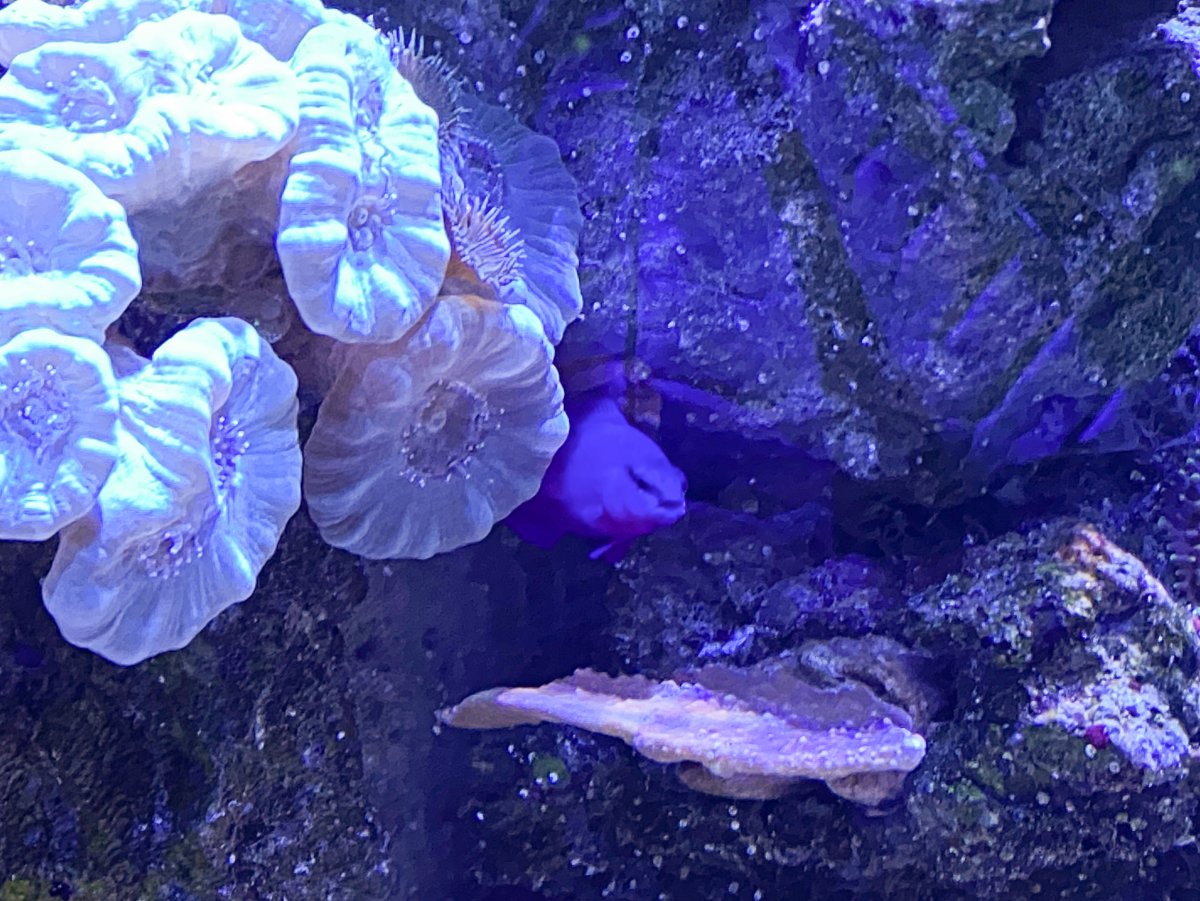 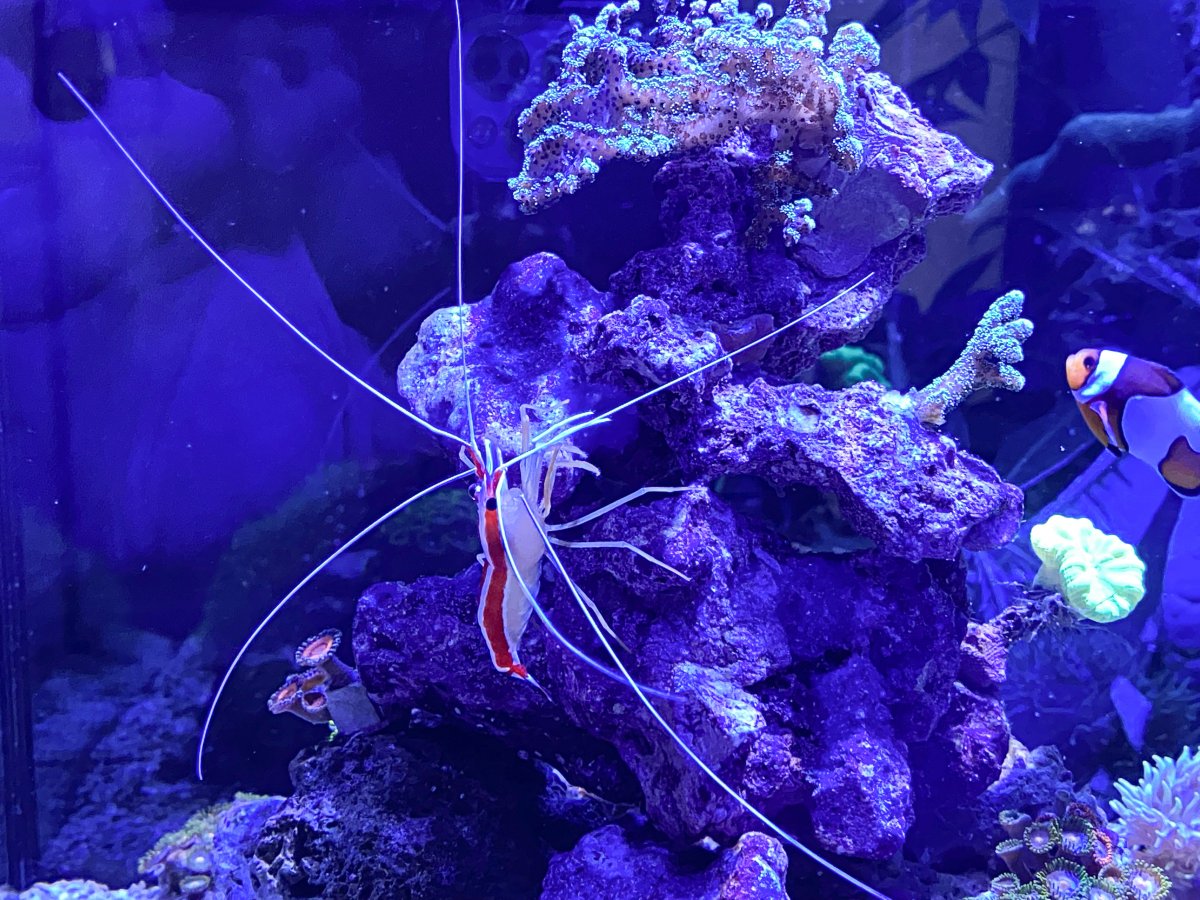 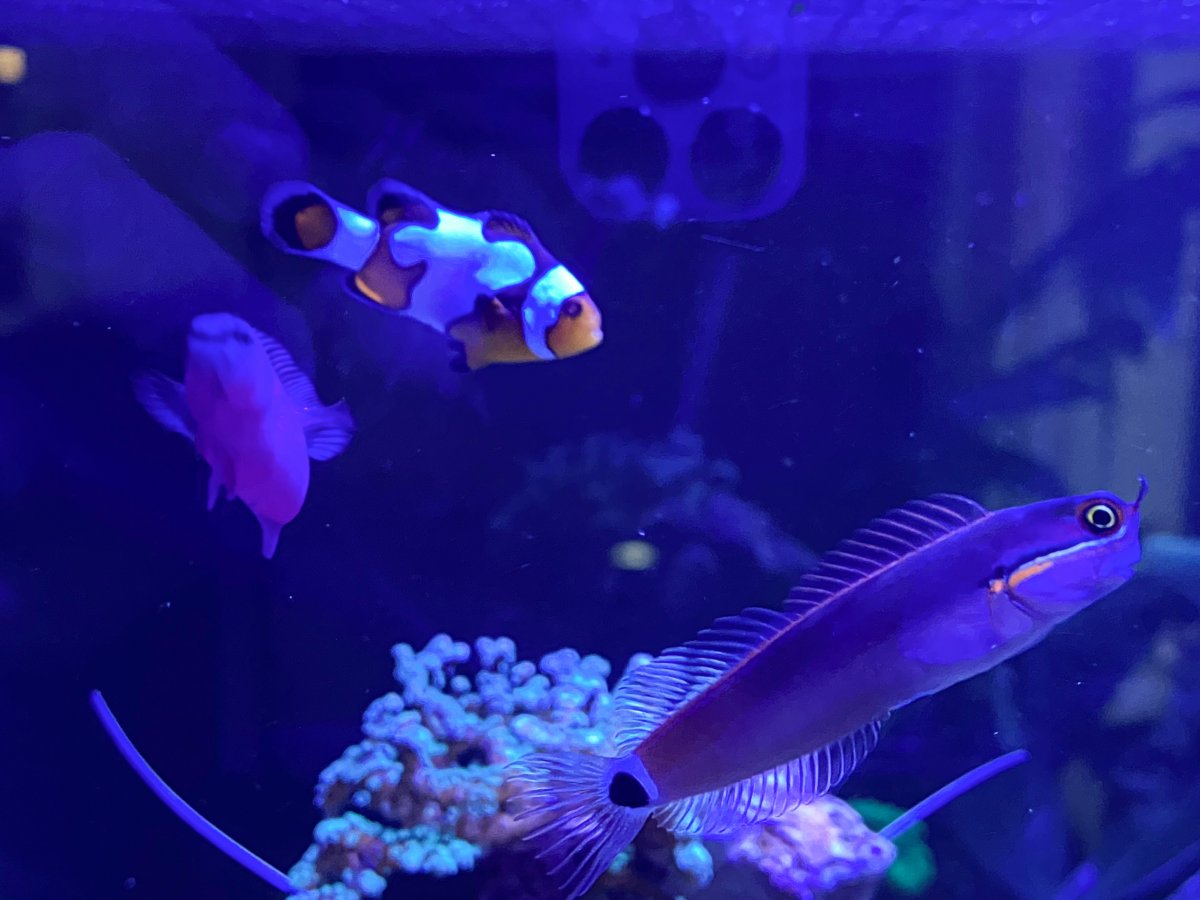 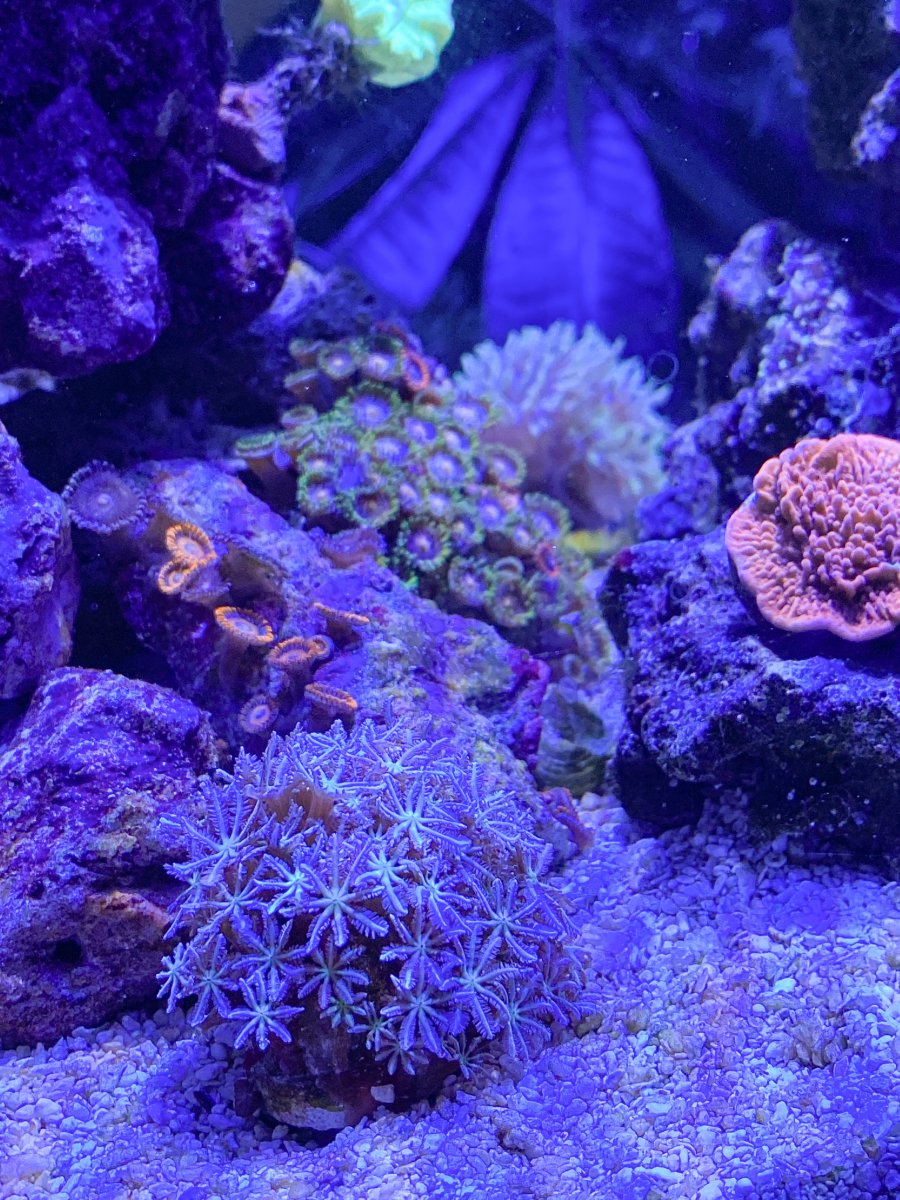