Backstory, been in hobby for off and on 9 years total over the last 22 years. Moving, having kids, etc. have caused me to sell off old tanks and not enough time to devote to the ones I still have!
Well kids are older now and can help as well.

Had a 15, 20 frag display, and the 57 gallon going for the past 4 years. Had zoas/palys, sps doing well in all of them and then it it all crashed, heater failure in two tanks. Lost all the corals, fish survived but they have since dwindled, due my laziness and them jumping out. Left is a six-line wrasse that came with my 20 frag display (bought it local from another reefer), my first fish into the 57g a snowflake clown, blood red fire shrimp (lost 1 and lost a coral banded), brittle star and numerous clean-ups (snails/hermits).

Well to get to the present! 57g Rimless is only tank with water in it as well as my survivors. I have cleaned it up and have been doing weekly WC. Removed 80% of the rock that was covered with hair algae, rock in it still has some. Did a 50% WC about 3 weeks ago and 20% last week and today.

My phosphate was at 0.14 (Hanna), but after today's WC it was reading 0. Will be checking again tomorrow.

SO for my rebuild, here is what my system is currently (but it's changing!!!!):
57g Oceanic Illuminata Rimless Tank
Aqueon Modular Proflex System 3/mag 9
SWC 120 cone skimmer
2 Avast Reactors (old versions, newer ones look sick!) for GFO and Carbon.
Avast ATO (This ATO with my RKE has never failed (ie. left in the on position and they probably have a better one now!)
BRS RO/DI 5 Stage for home drinking water (not sure they make this anymore)
Radion Gen 1 with TIR lenses (maybe upgrading)
3 mp10 Vortech. (2 i bought for the 57g (WWD) and 1 (ES, came with the frag tank),
Digital Aquatics RKE.

Some pics for you all: 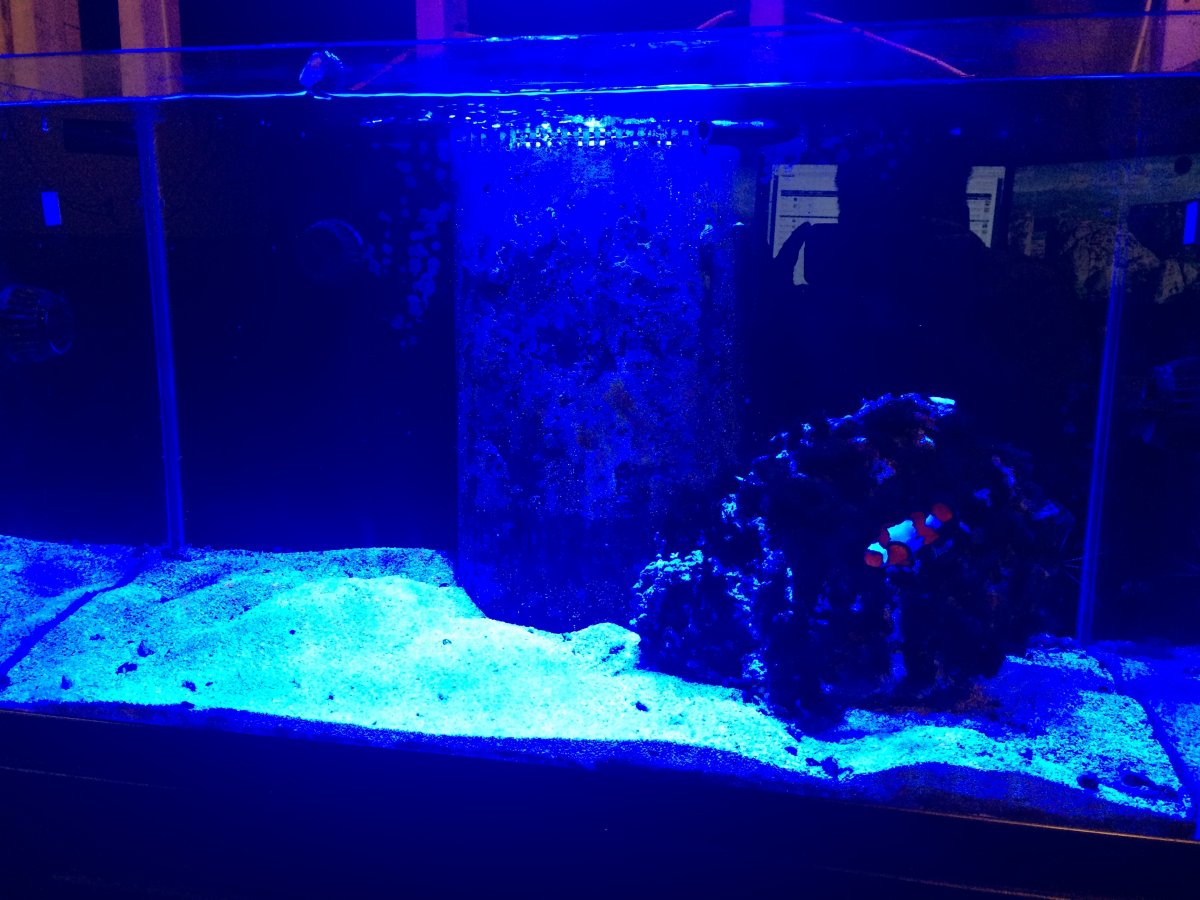 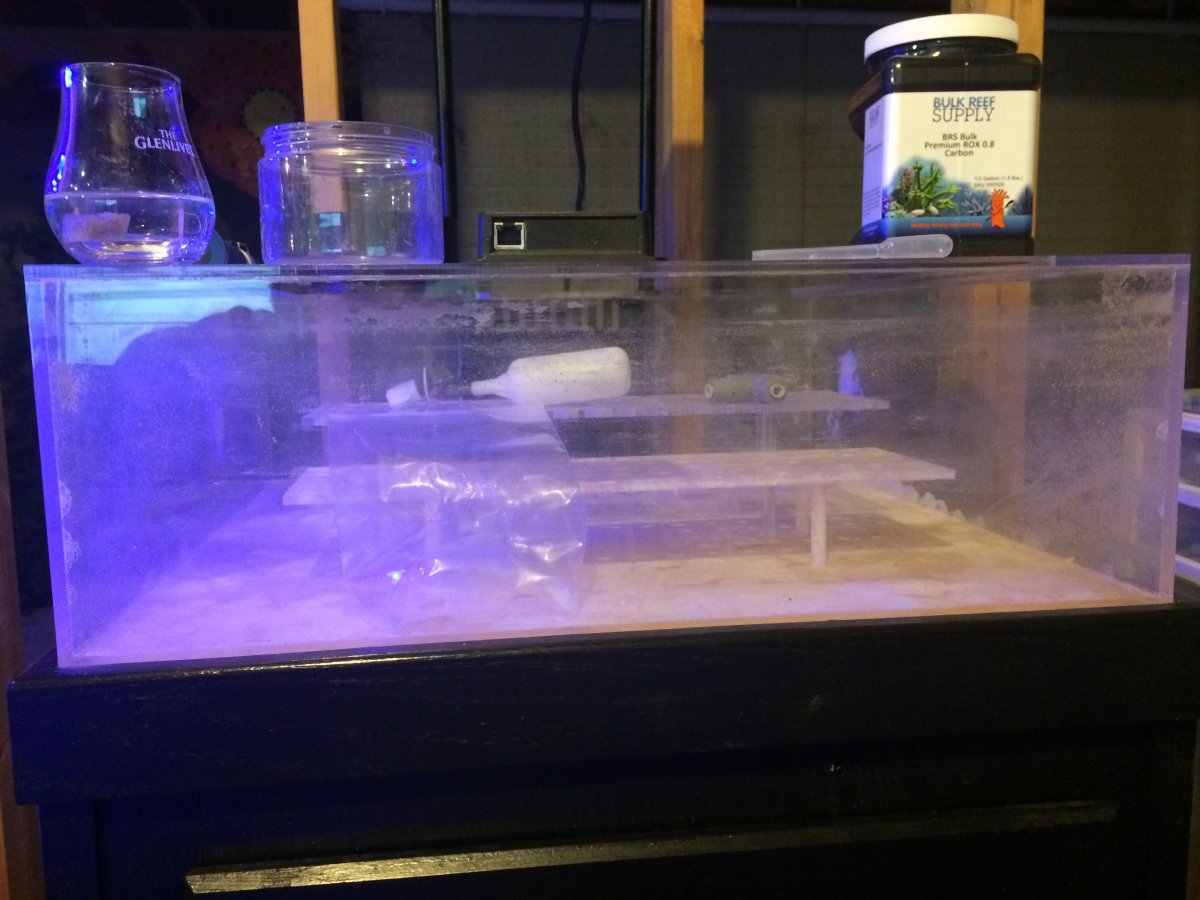 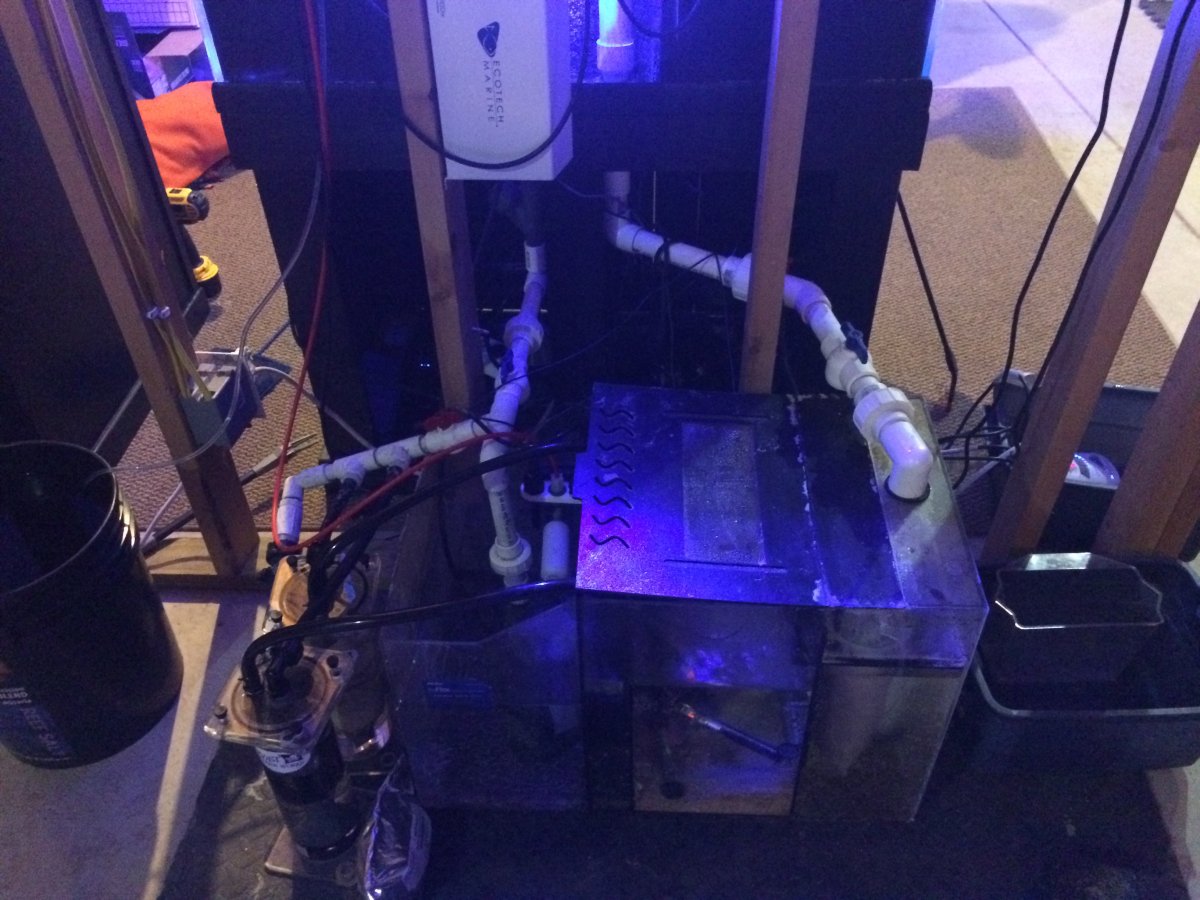 So whats ahead:
I've ordered a new sump and fuge from Lifereef. Big enough for 300 gallons, plumbing both the 20g and 57g into it with plans to go bigger.
WC station: 2 x 65 gallon storage tanks, have one, store has to get another one in.
One for fresh and one for salt! No more water on the floor from forgetting to turn my rodi off! Wife=HAPPY
And no more all day WC's, mixing salt heating it up! With the other tank, it will be flawless! Both storage's to get a heater/circulation pump. This is the one thing if you get in this hobby you should do first because WC's will make you hate the hobby! Set up a WC station! 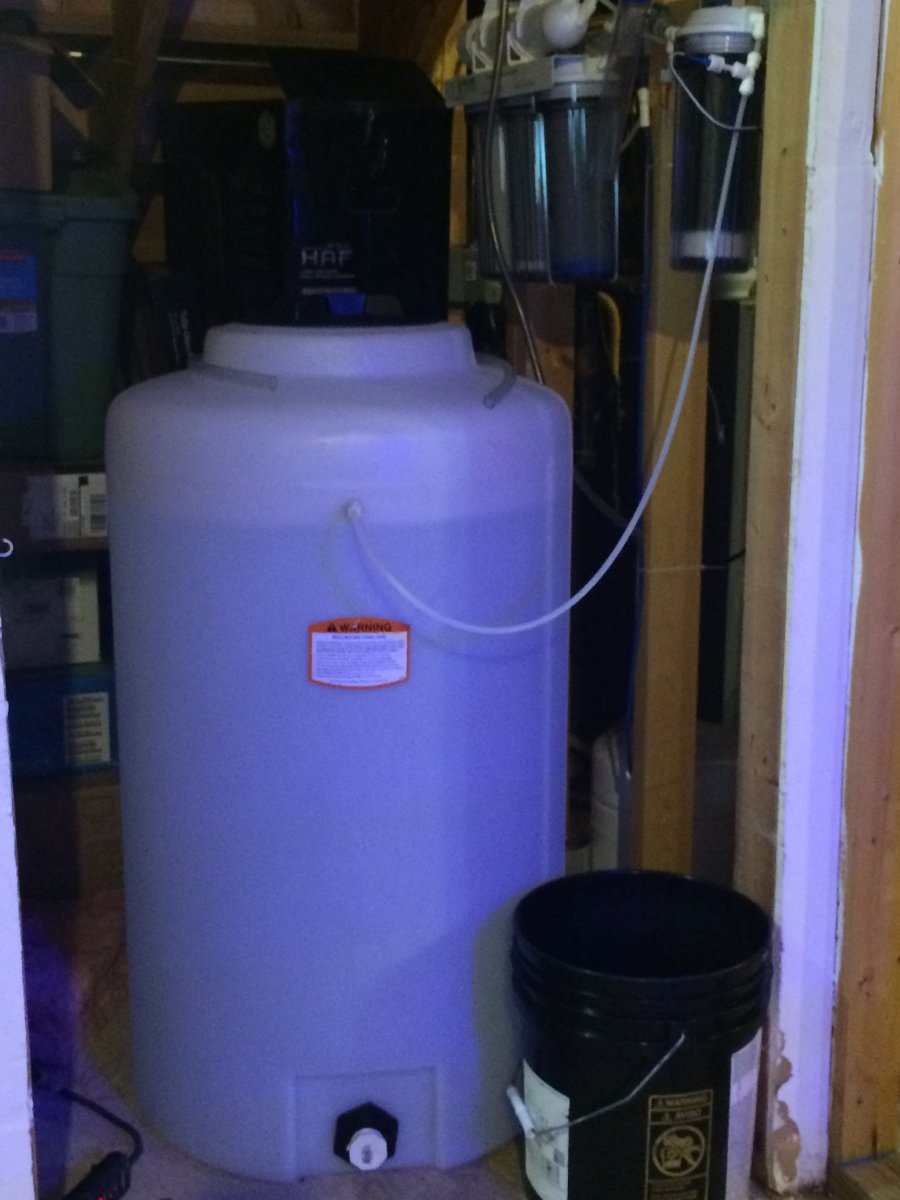 LED/T5 hybrid: utilize my Radion (on the fence on upgrading) and some Hamilton T5 retrofits into a hanging canopy above the tank. Going to build the canopy myself.

MP10's, will update the es to wwd, but not qd as i really don't hear them anyway! Tanks behind my gaming computer, which is louder with its fans!

20g frag: still trying to figure this one out, want to plumb to new sump, it's not drilled, but has an overflow box already in it. Never drilled or worked on acrylic before. And what overflow design to use? 57g uses a durso. Bean is too big for the tank without modifying. Herbie?

That about sums it up for now with the "rebuild"! Hope you all enjoy!

Forgot to say: bought new liverock as I wanted to change it up and use something different. That will deliver in Mid-March as well as the sump/fuge. For right now, its weekly WC and checking phosphate, no new hair algae growth, just trying to take care of what's on the one rock that's left, cleaner crew seems to be working at it.
OP

This is what I did today. I moved all the controllers to a piece of plywood that I hung. Finally in a spot I can manage a lot better and don't have to worry about water splashing on it! Waiting to get my mp10 brackets and then everything will be nice and neet. 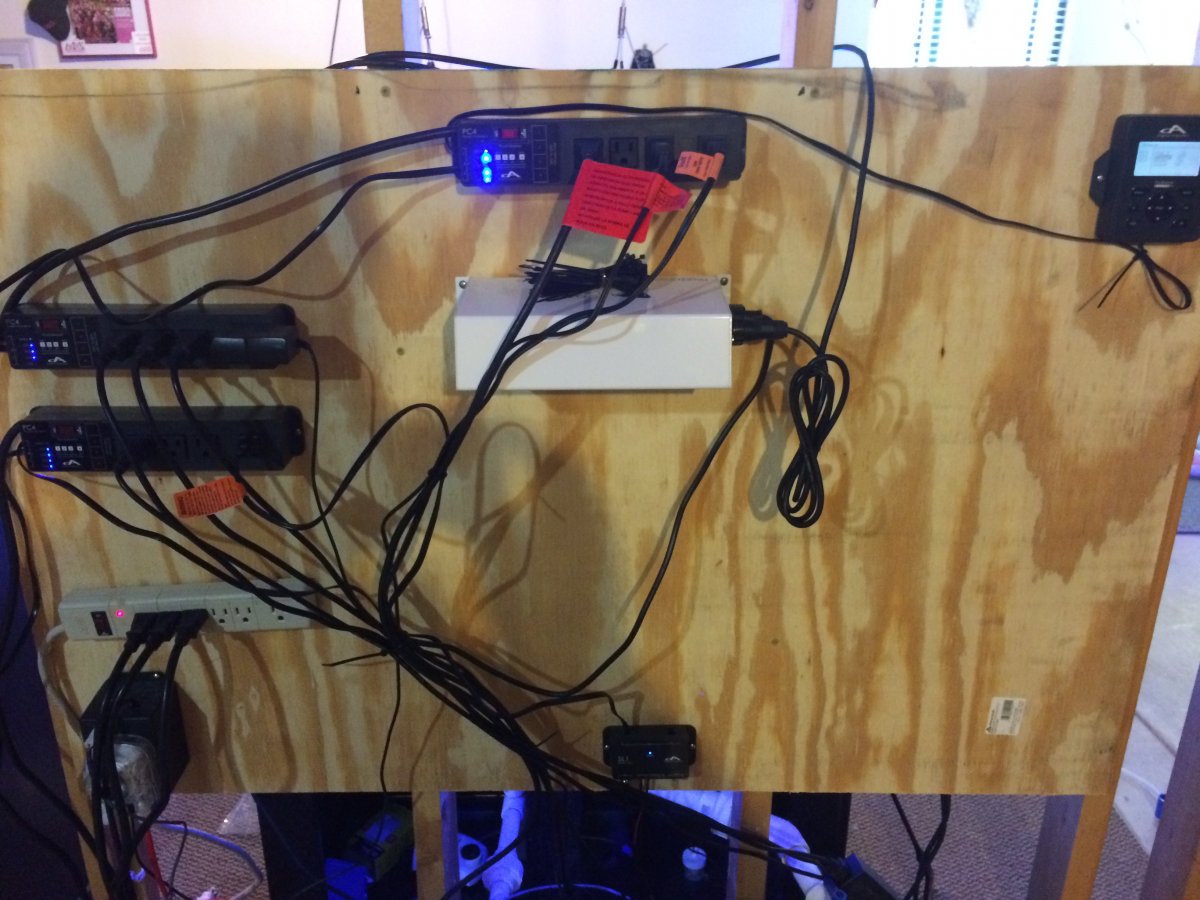 Seeing lots of 57's lately! Great tank! I really like the water reservoirs, need to get some myself. Best of luck with the rebuild!
OP

kschweer said:
Seeing lots of 57's lately! Great tank! I really like the water reservoirs, need to get some myself. Best of luck with the rebuild!
Click to expand...

I noticed that too! The 57 club is coming out in force! Going to have to get yourself one!

Gomery12 said:
I noticed that too! The 57 club is coming out in force! Going to have to get yourself one!
Click to expand...

Lol I love mine!
OP

Here's my small update today. Hung the MP10's and did some zip ties! 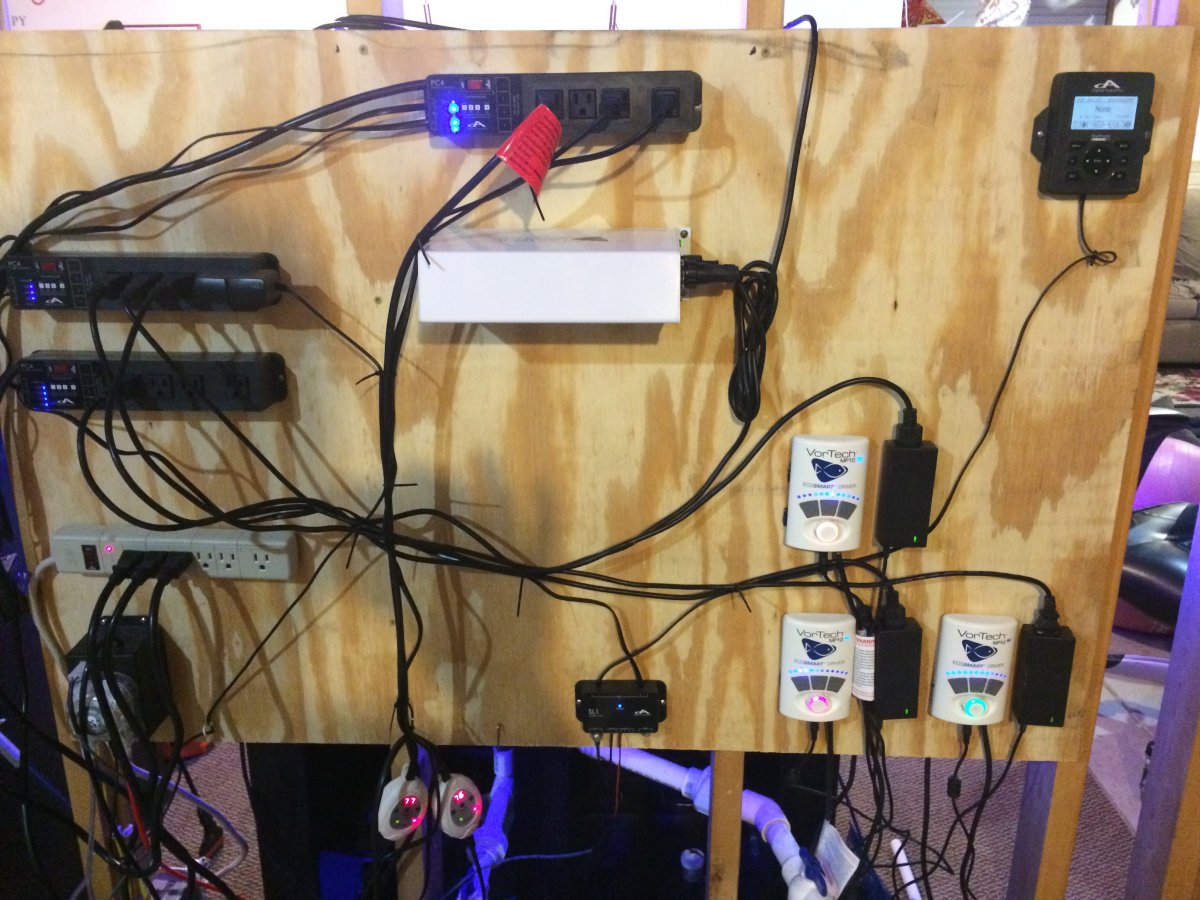 Got my new heaters in adn running, one is offset by 1 degree, temp has been really stable now! Struggled with this, due to not wanting another heater. Now I realize the importance of redundancy.
Here is the rest of the the tank and the plans of the rebuild. This is my current sump, Aqueon Proflex Model 2. I know you see no skimmer, I have a swc 120 with no working pump at the moment.
What is in the tank and sump has plenty of bacteria and can handle the current bio load. I have a sump and skimmer on its way from Lifereef. Levels are good and I do weekly water changes. Not adding any corals or new livestock at this time. I did get some cleaner crew due to the algae growth (all my fault) and today my tank looked the best ts been in awhile! 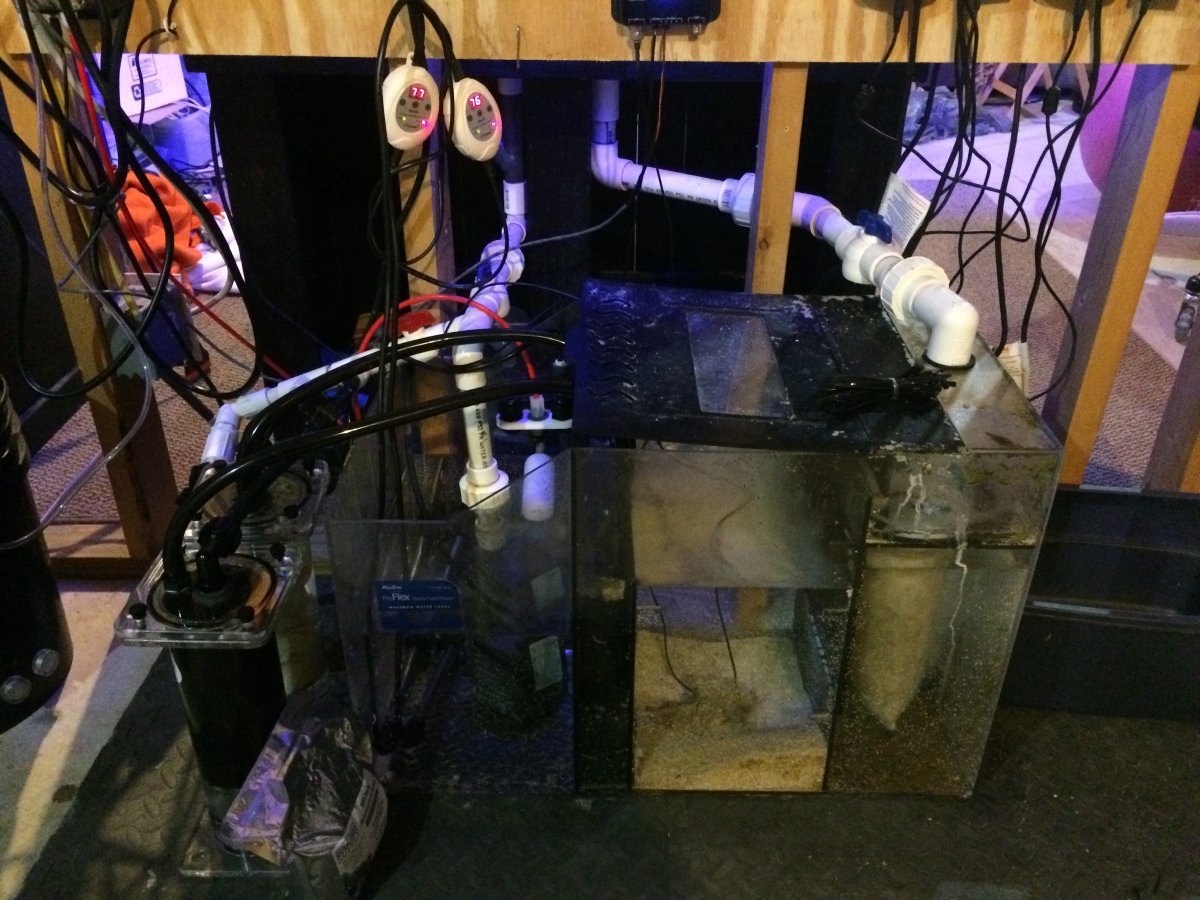 Here's a pic of the tank: 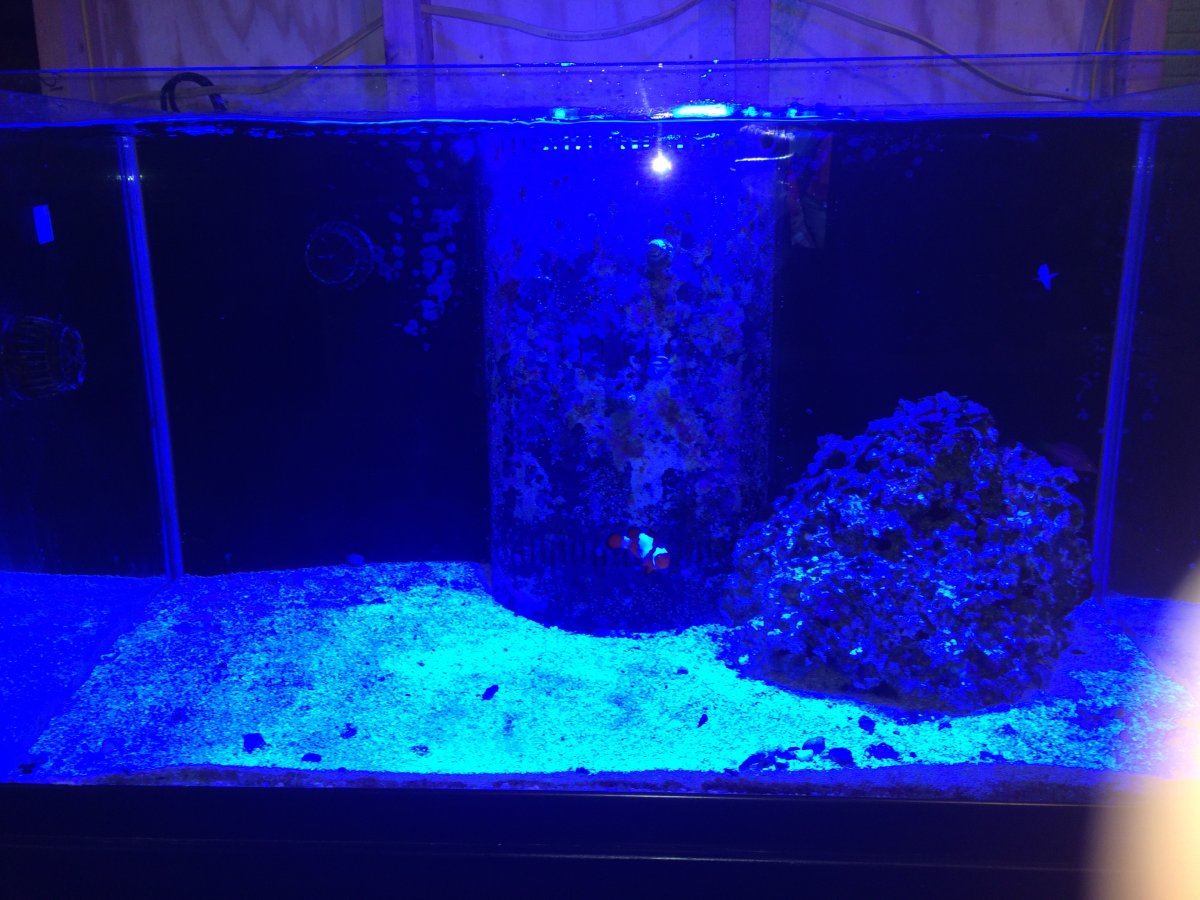 Sorry blues are on and I didn't want to plug it all in to turn on. But if you look at my first pics and can see the hair algae, it's 98% gone now! What's next?
Build a canopy for the hybrid light build, I've got new rock from BRS coming in, Reef Rock Live 2.0, which I will try and figure out a new aquascape with. Work on new plumbing for the new sump.
Keeping me busy. Sorry about the bad Iphone pics. I'll do better with my dslr next time.
OP

Got some goodies today! Sump, Skimmer 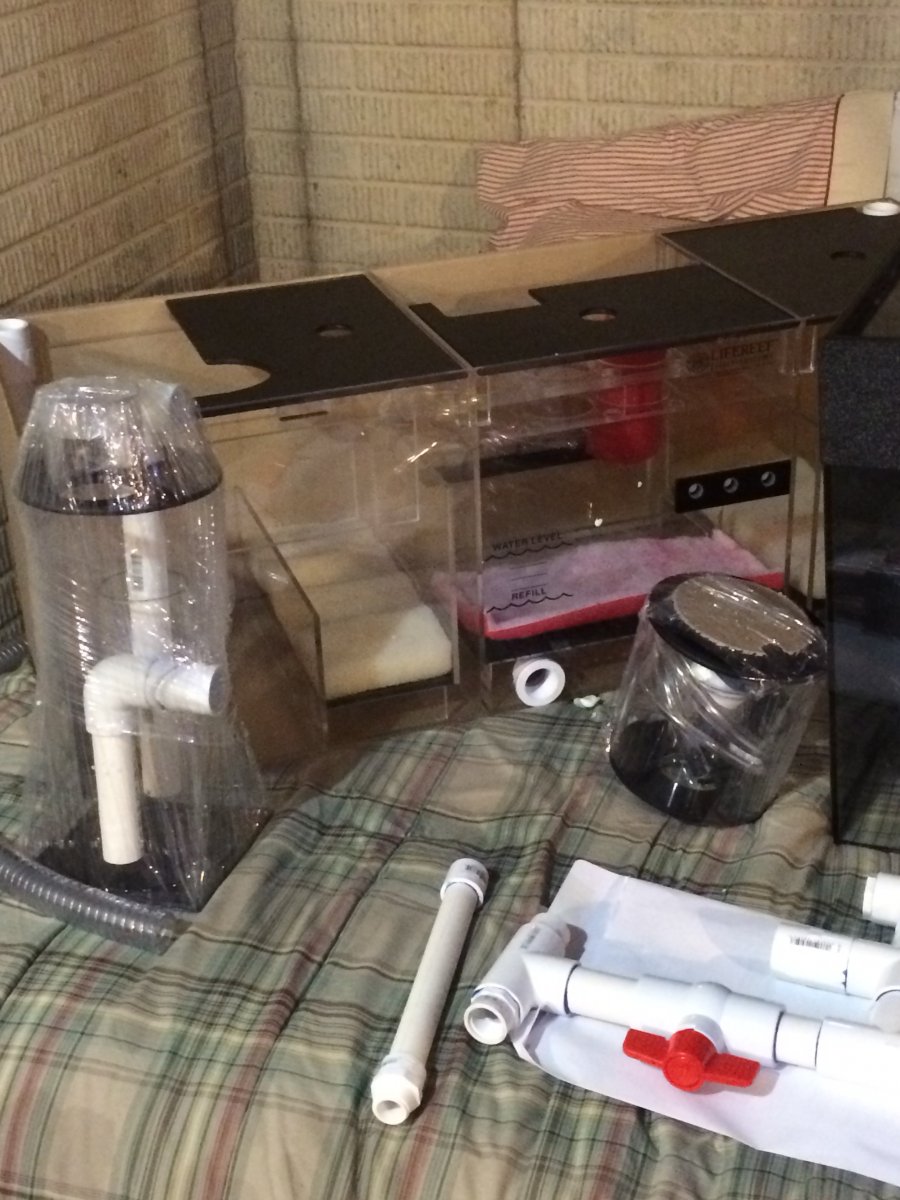 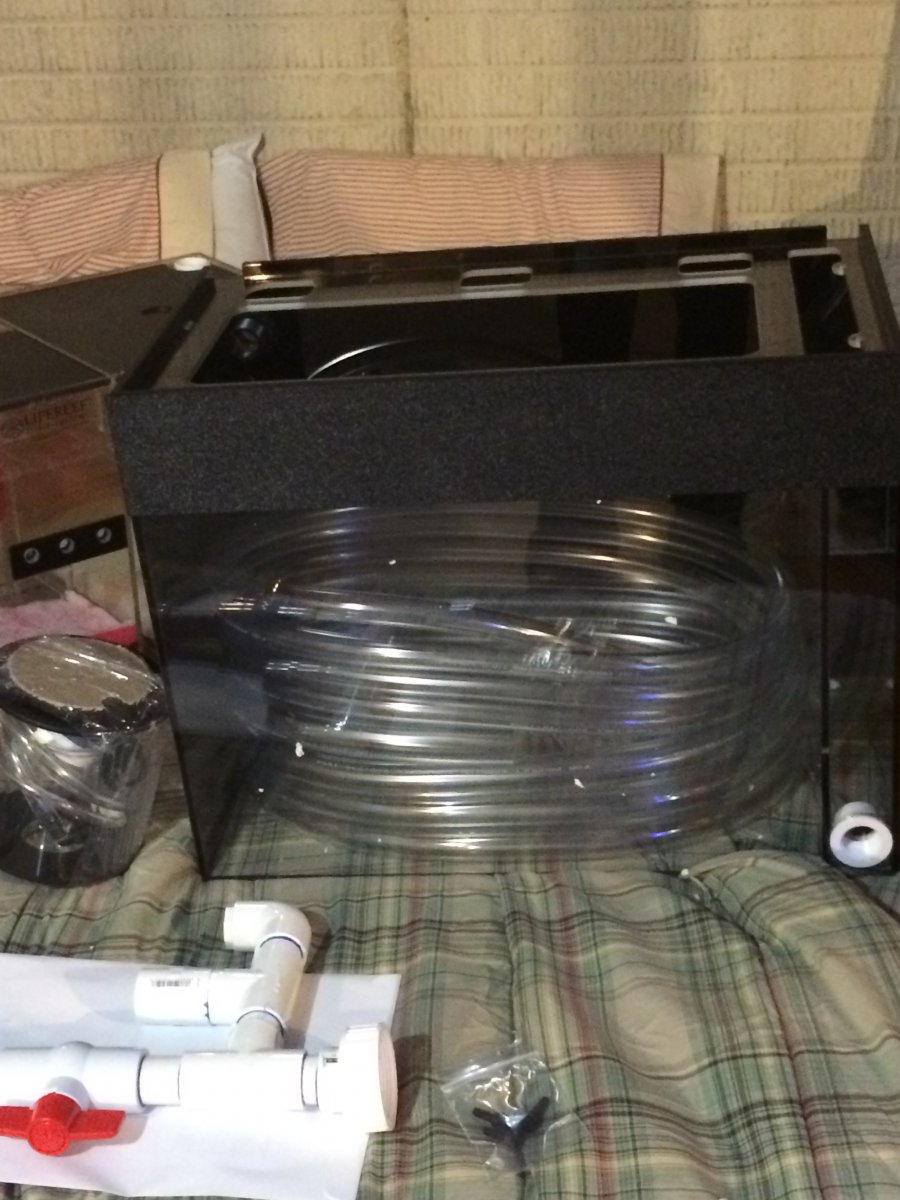 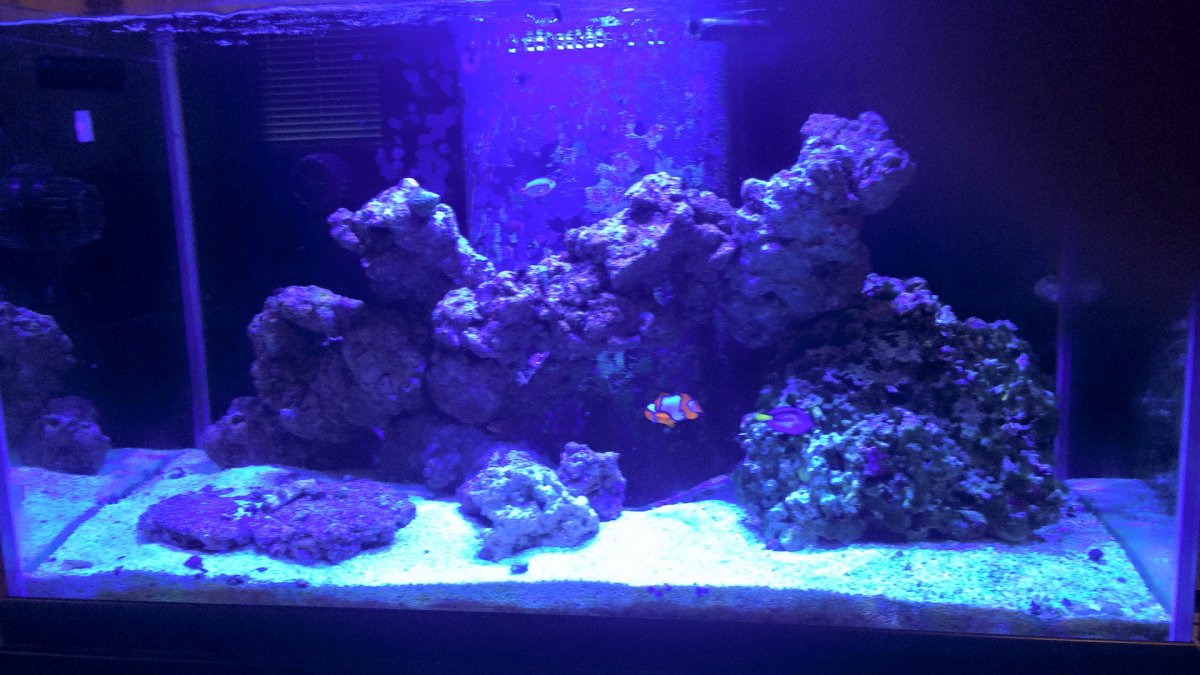 Here is an update of my tank redo progression.
The new rock is in after my cure. I got the BRS reef rock 2.0, which actually came pretty clean. My question is this. the big rock on the bottom right, I had left in from the previous rock work as to keep beneficial bacteria in for the fish that survived. Fish are all doing great. Problem with that rock is that it contains hair algae, which is definitely under control and seems to be going away. I really like this look and would like to keep this rock but if it's going to be an issue with the hair algae, then I'll take it out.
Currently running a skimmer and reactors with carbon/gfo. It's been running with the new rock for about a week now, same light schedule (Radion Gen1). I don't have any hair algae growth on the new rock. Should I remove it and run it through curing process?
Doing a 7.5 gallon WC weekly.
OP 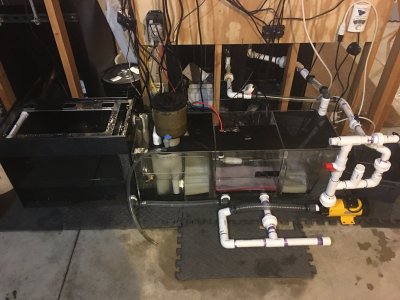 Finally got to installing my Lifereef Berlin and Refugium! Excited and it's not leaking! First time doing my own plumbing! 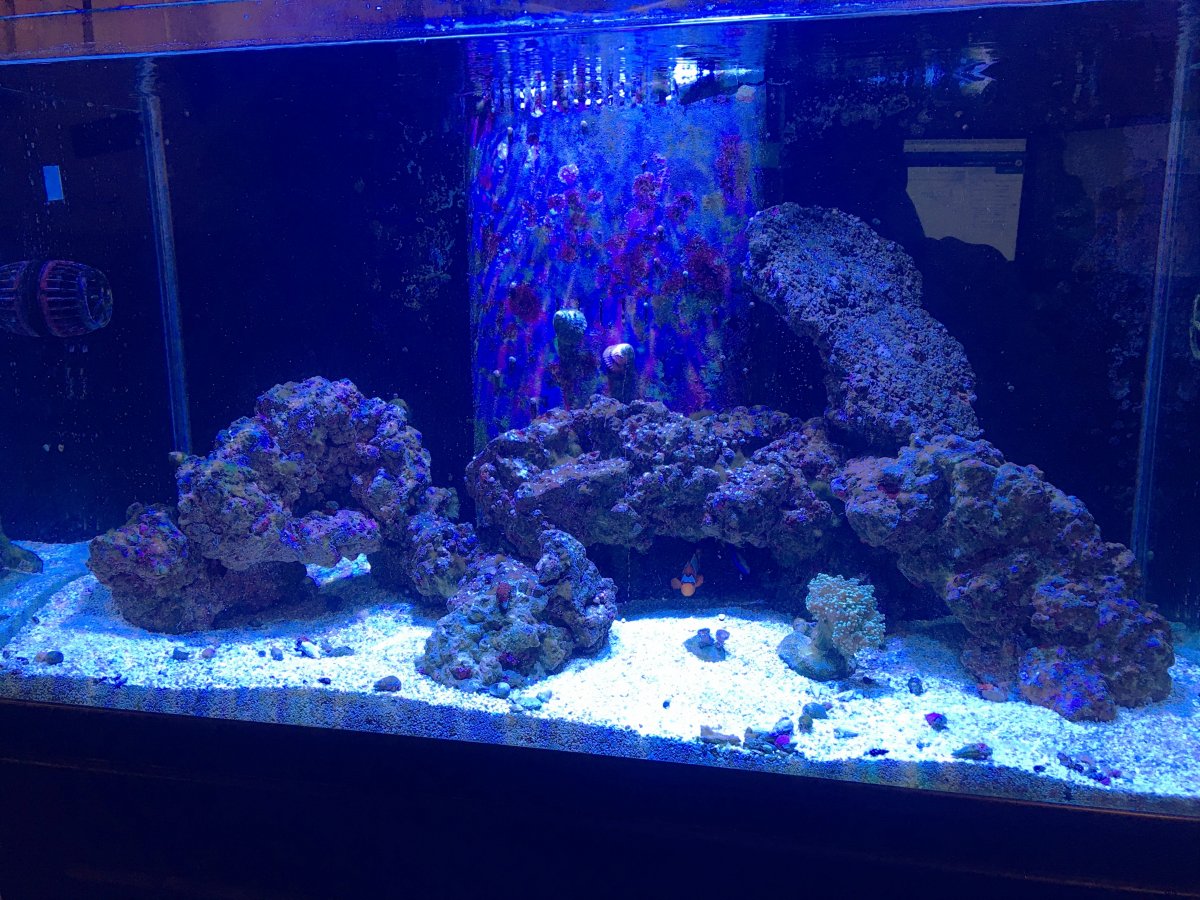 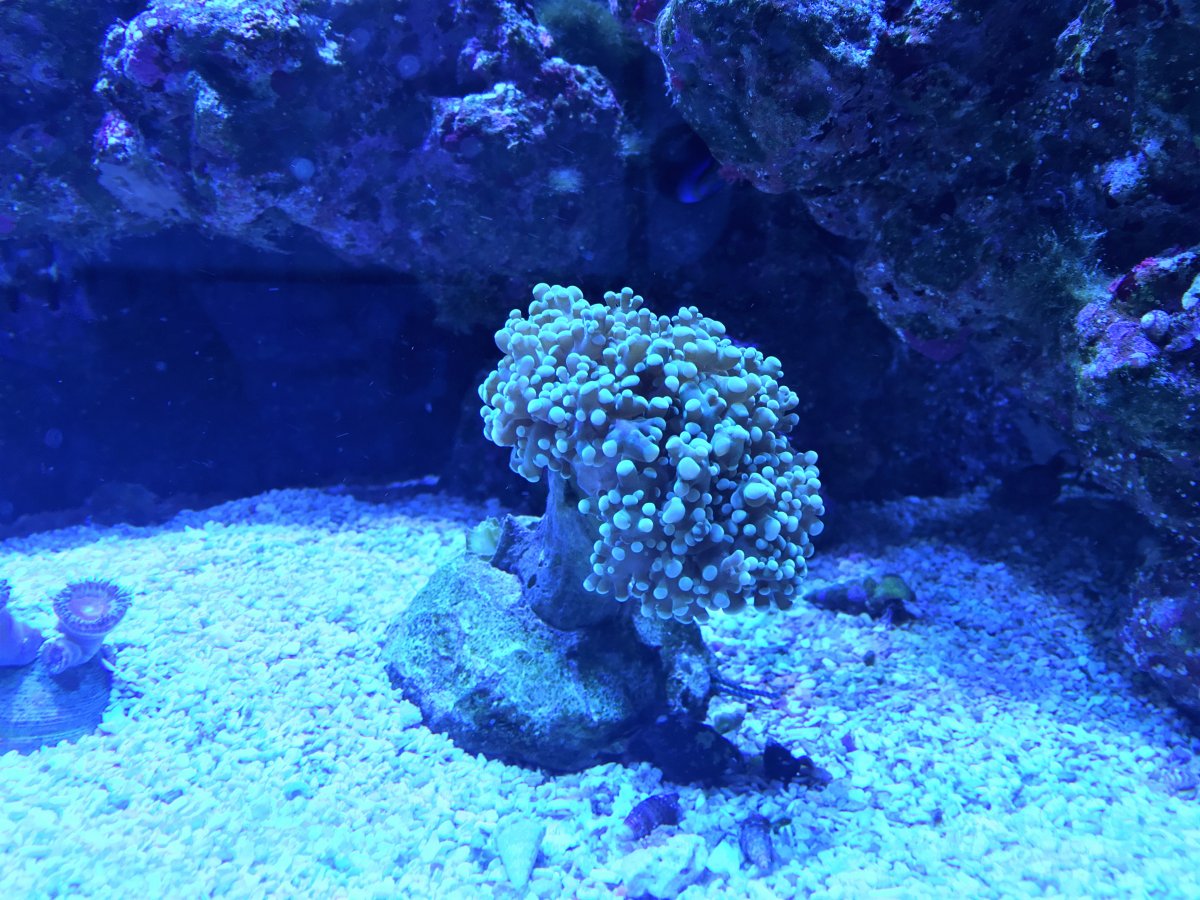 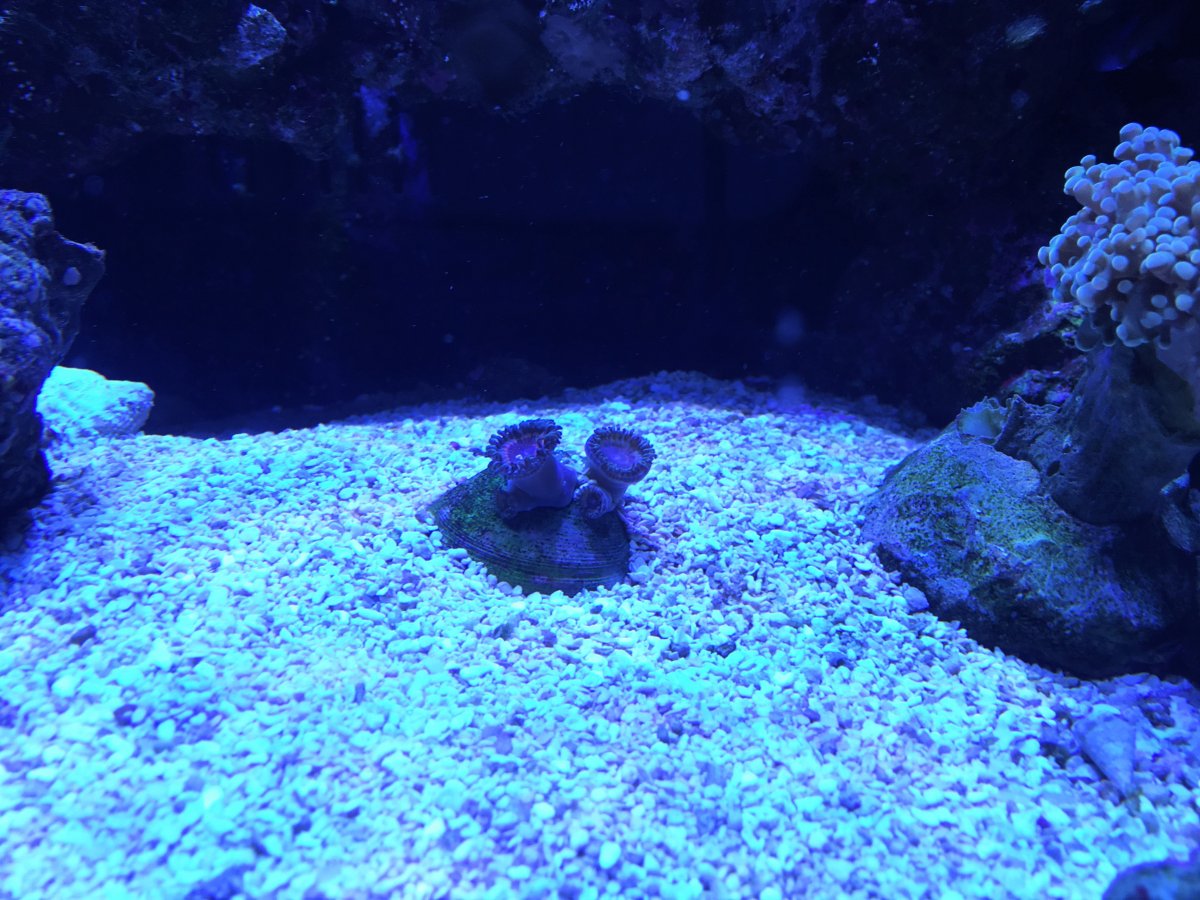 I love all the caves in your scape.

What kind of stocking plans are you thinking?
OP

cpschult said:
I love all the caves in your scape.

What kind of stocking plans are you thinking?
Click to expand...

Going to get another light, Radion Gen 4, and then look at my par levels and see what i can do. Probably going to add some more base rock to get higher levels. I've got some BRS pukani around, so scape is going to change. But the caves will definitely be there!
OP 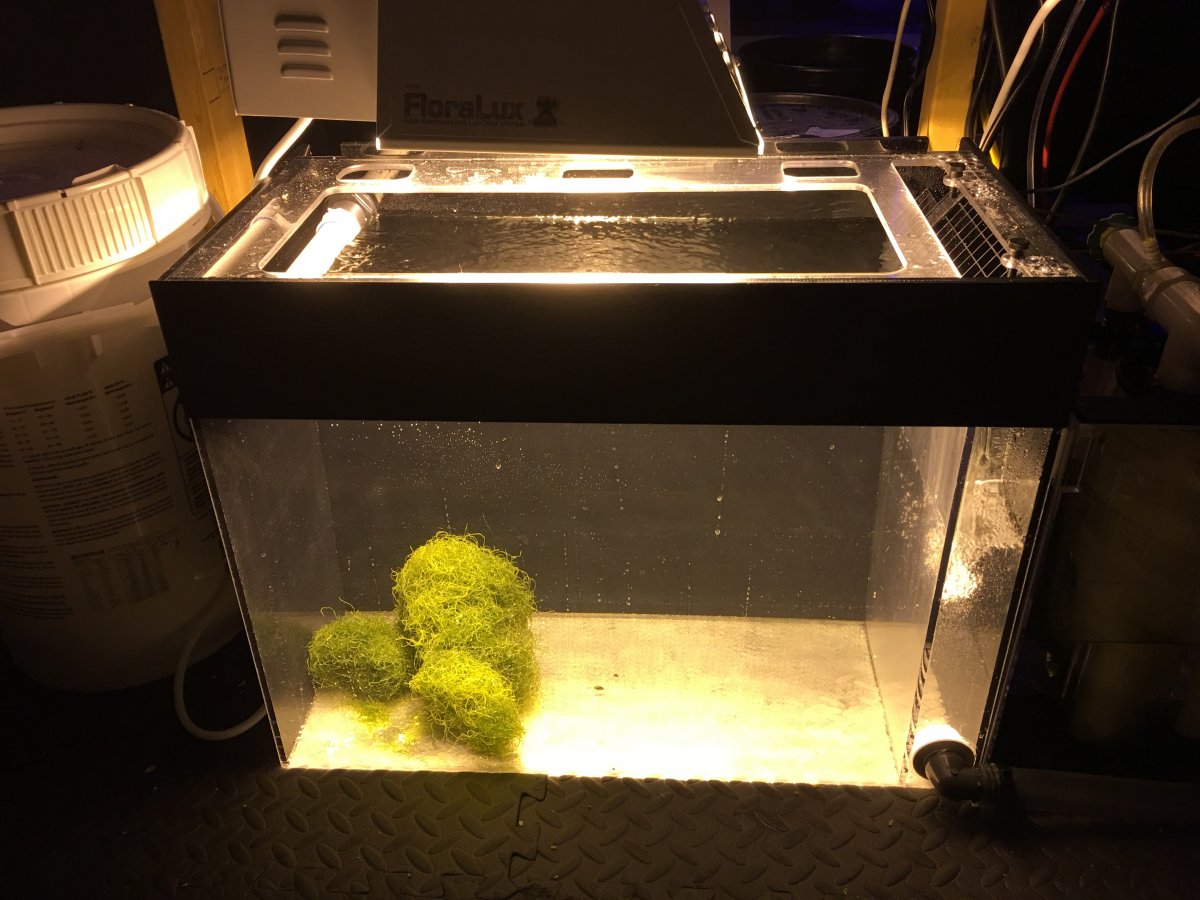 Fuge is up and running. 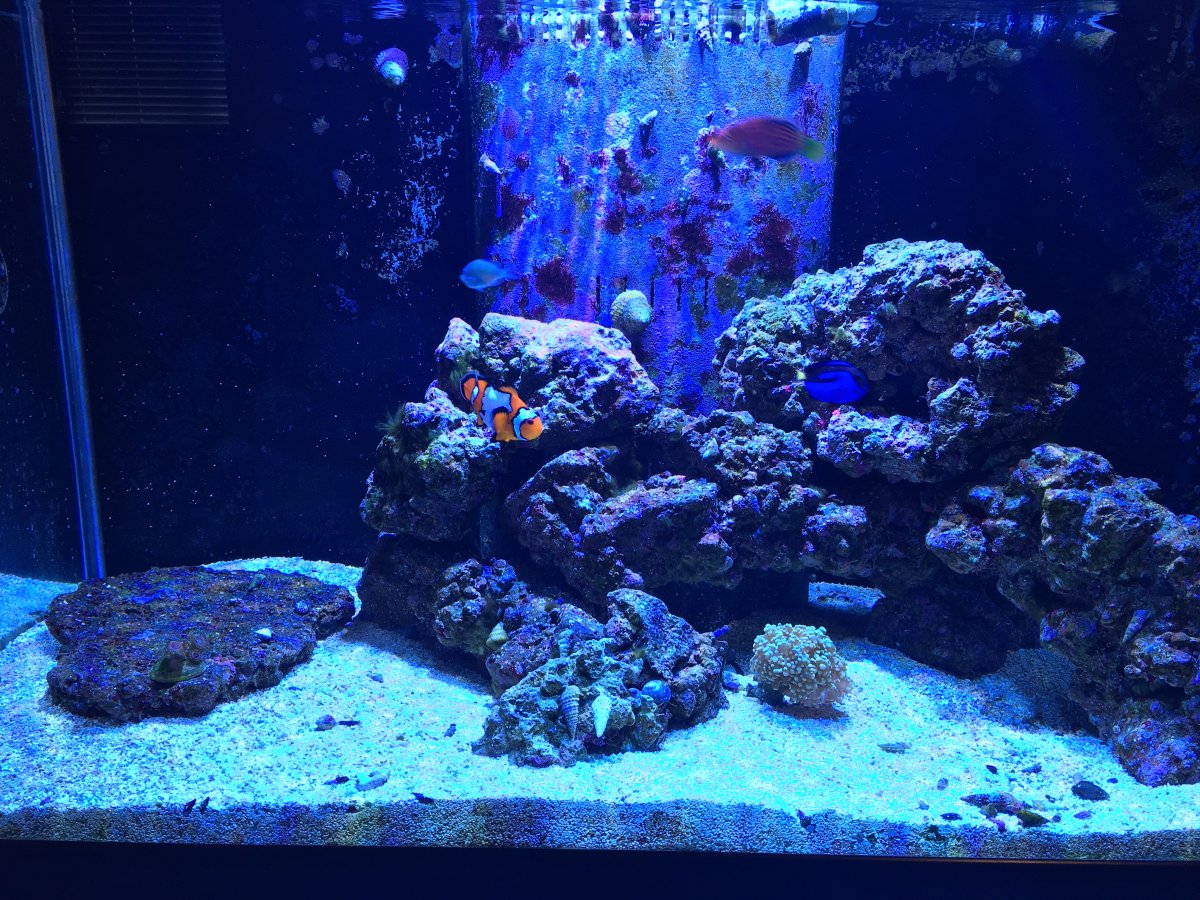 Redid the scape and ordered some Tonga branches to come up from behind in the right back and some on the left side.
OP 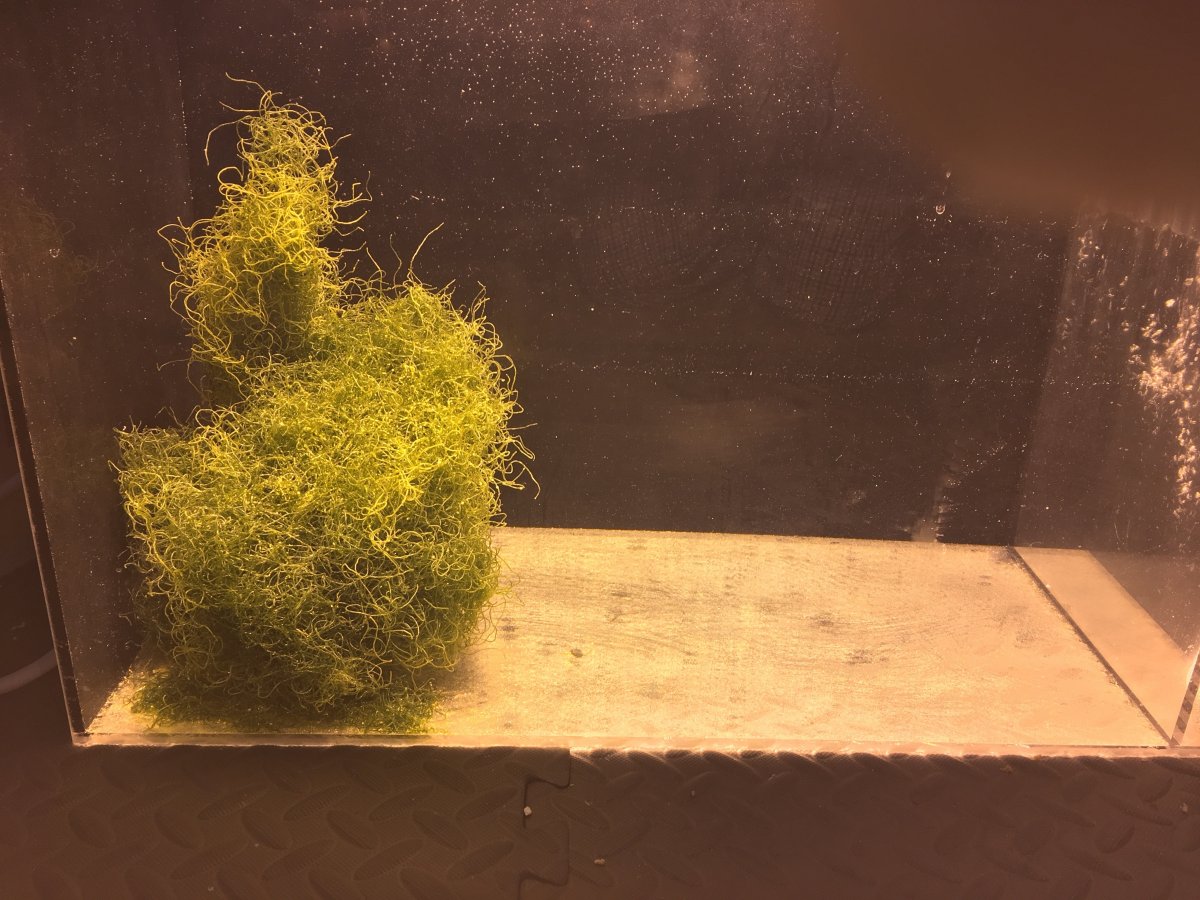 2 days in and i got some growth
OP 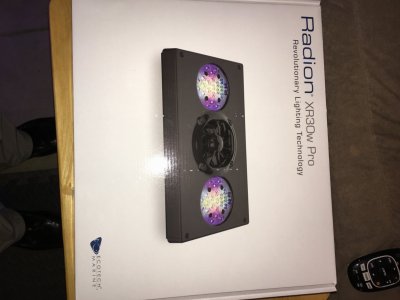 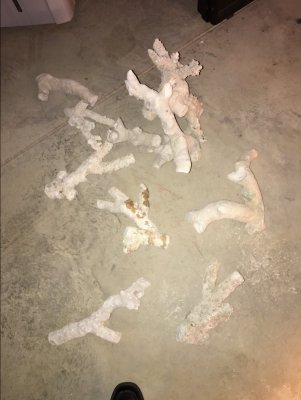 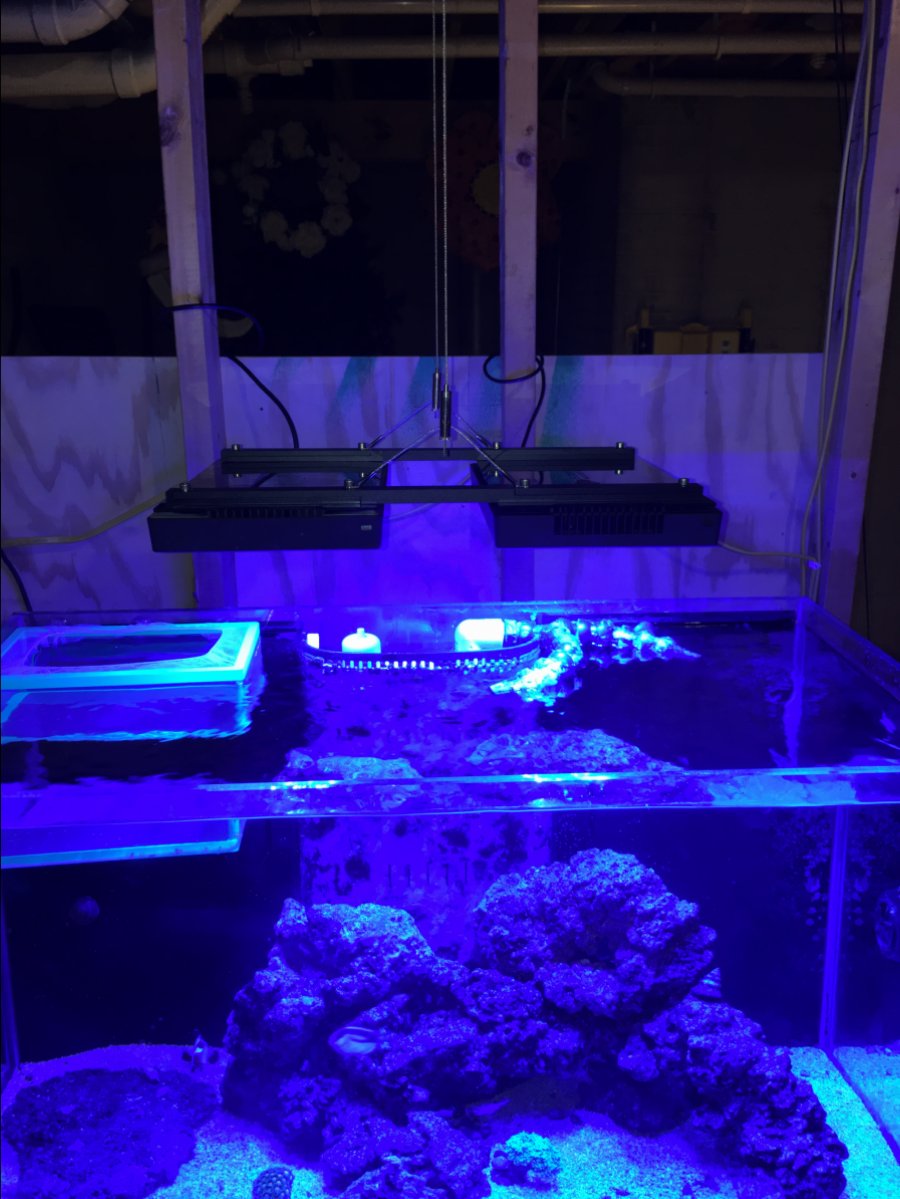 Did a little rework to make thing look neater, amazing what a few holes will do! 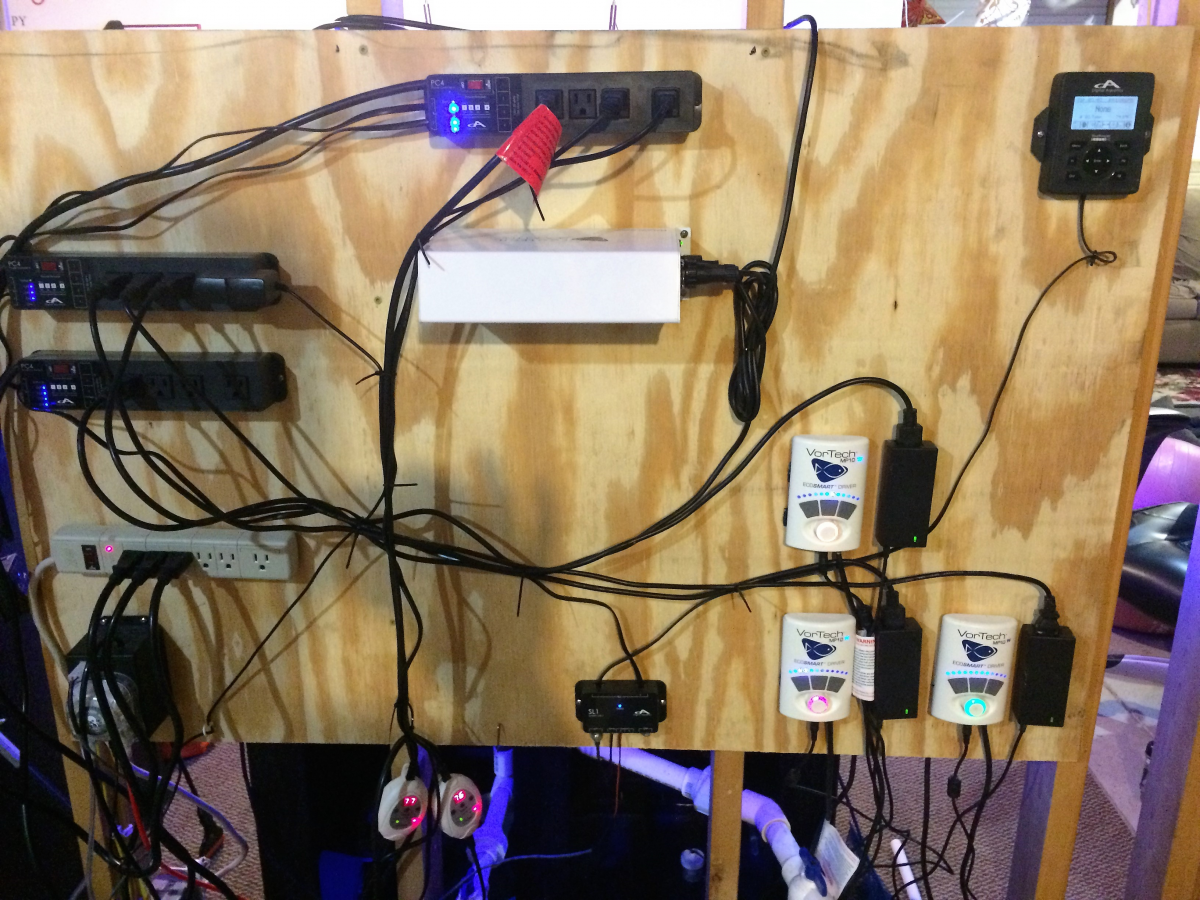 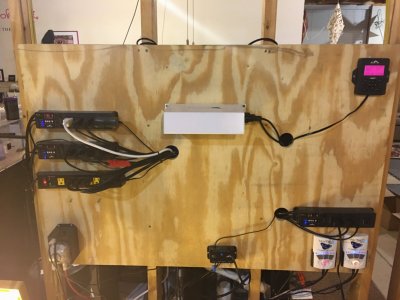 Full Tank Shot for the day! 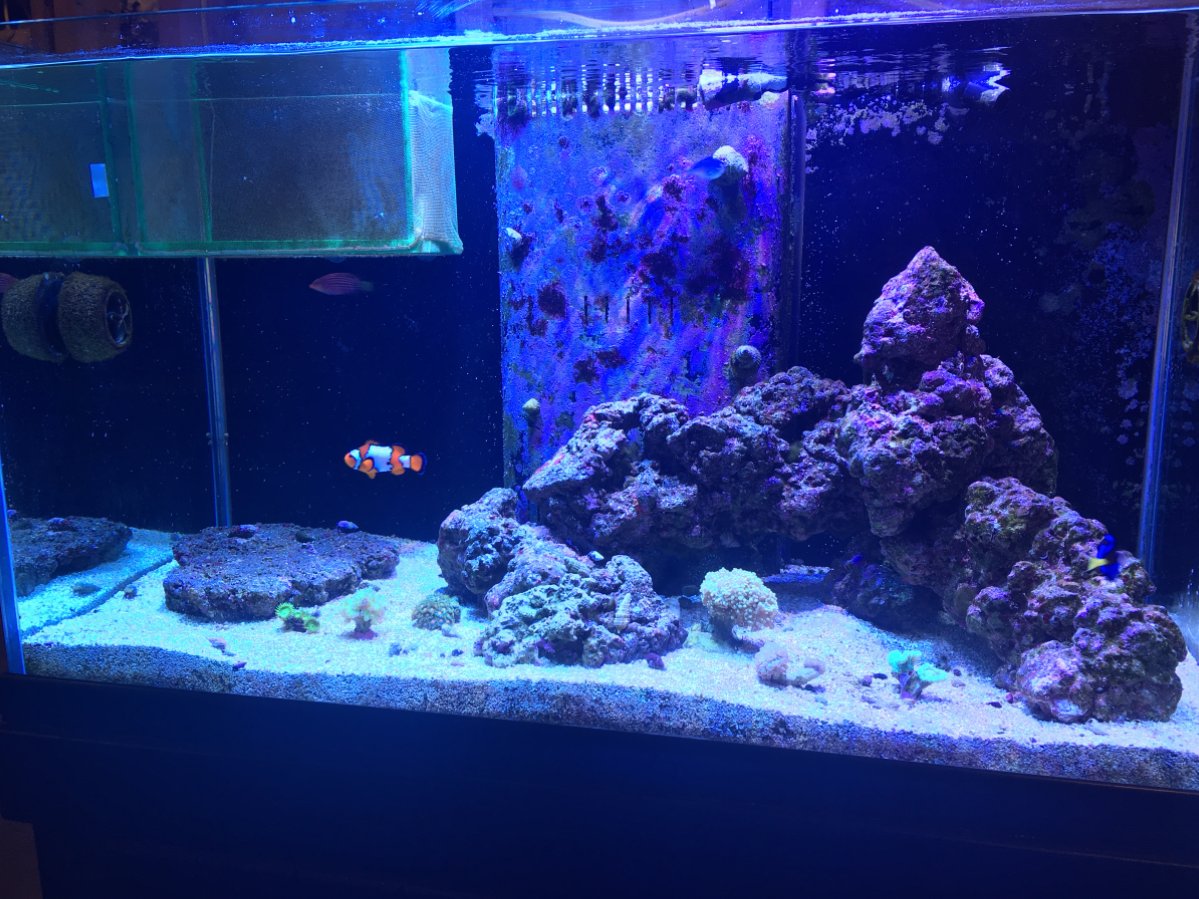