Greetings from the Palm Coast FL our tank

Okay, we had vacationed in FL and said we would move here, we did and now we have a saltwater tank and we are quickly becoming enthusiasts.

My wife had stopped in a place in St Augustine where another person had purchased 4 or 5 tanks and they said one more was too much and they were selling the tank complete for him for 1200.00 - the owner of the place seem to know what he was talking about and said it was worth 4-5 thousand so I offered him 1k, he called the guy and we agreed on 1100. Then I paid the shop owner 700.00 to come out and stand up the unit, and we agreed that he would come bi-weekly for us to help out until we got it up and ready for fish.

We purchased sand from him, live rock, and some frags as well as 4 clownfish, some crabs, etc. Fast forward, we stop in there constantly wanting to understand and support our new joy and from what we have learned, we were told just about everything wrong. Finally, the guy who we were paying to come out, just never showed up or called again. whew..

We found another place in Ormand by Daytona Beach and they are a legit company, we have been using them for a few months now and our tank and our knowledge are night and day from where we began. The one thing he did leave us with was red tide, finally, that is gone.. ugh

We now have 2 of the clownfish left (both of the others jumped out, not funny) an Orange Storm, Premium black phantom, blue eye coal tang, Yellow blotch rabbitfish, a blue tang, and a yellow watchman. We had a blemi (Spelling?) who was bright orange and really cool but he also took the leap of faith. We have added more coral, and around 12 or so new frags, had to replace a lot of things and rework the entire sloppy install.

Today I stopped up to get 10 gal of RO and picked up some new frags, I wanted one of those Angel fish and was advised not to!

So excited to find this place, thank you!! 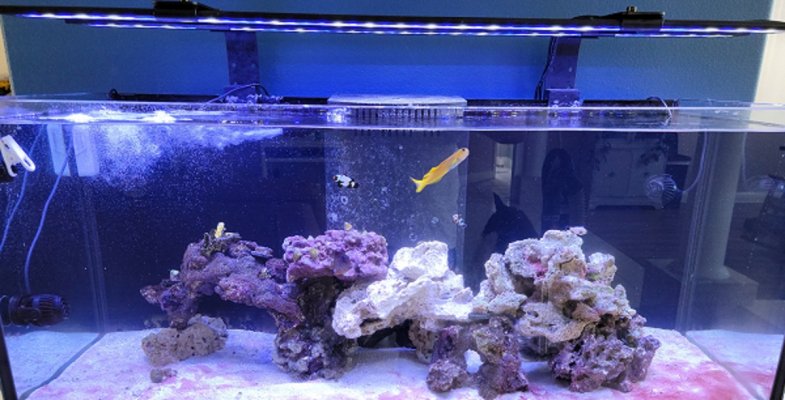 Get a dwarf angelfish. The Coral Beauty is relatively peaceful and has amazing colors!
OP

blaxsun said:
Get a dwarf angelfish. The Coral Beauty is relatively peaceful and has amazing colors!
Click to expand...

Thank you, we are going to look into that for sure. I need to update with my latest image, that tank has come a ways since this image. Having a problem with the image size restrictions, my camera takes really high def pics

Looking for Pink B Chalice
2

Build Thread IN THE BEGINNING......