Grow your own LIVE food! But which one is the easiest?

Is there any shrimp to hatch bigger and more nutrition than brine ?
L

Teku1998 said:
Would love to see more white worm setups, thinking of doing that myself, also based on the expertise of Paul B.
Click to expand...

Doesn't take much. They do better cold it seems, and my house is pretty warm. People use wine fridges. I just bought a styrofoam cooler and rotate a couple ice packs. KISS 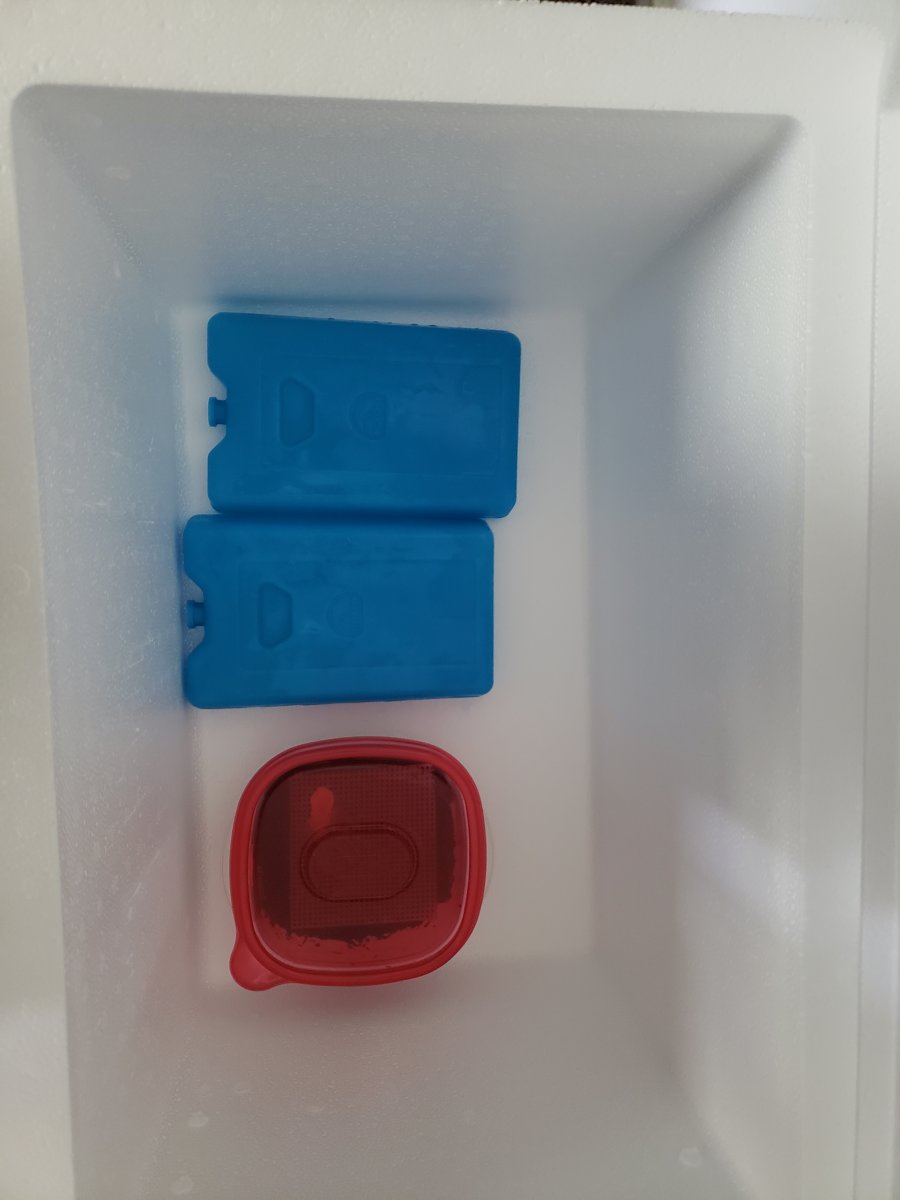 Probably gonna split this into two containers this weekend. Glob of yogurt with some nutritional yeast sprinkled over it to feed. 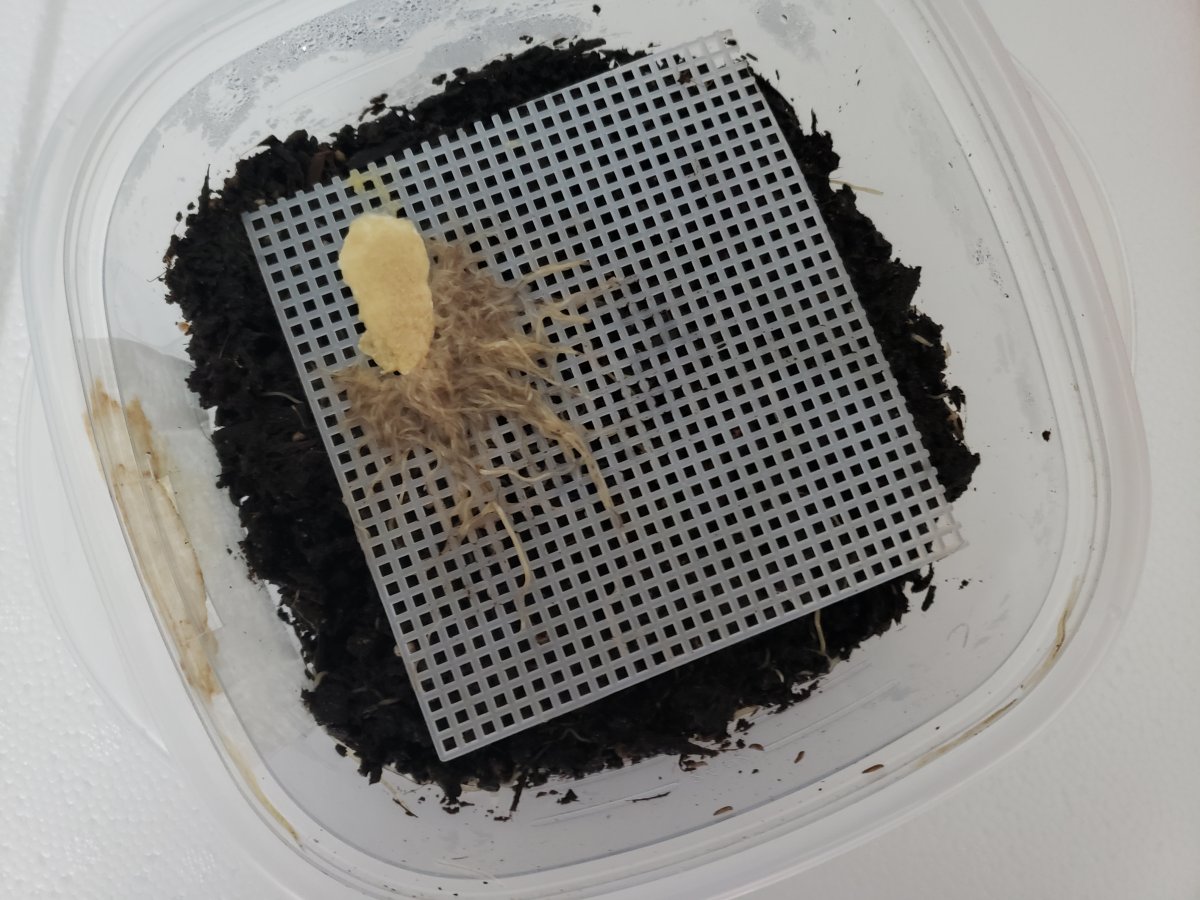 I use this brine shrimp hatchery. One of the most ingenious things I've seen. Eggs go in the outer ring. A lid goes on, shrimp hatch, swim through the rings to the middle, to the cup. Shells stay behind. Mine typically start hatching in 12 hours. All you need is salt water. No pump, no heat, no bubbles, or extra light. Most of my fish get BBS throughout quarantine, and I feed the DT from time to time. 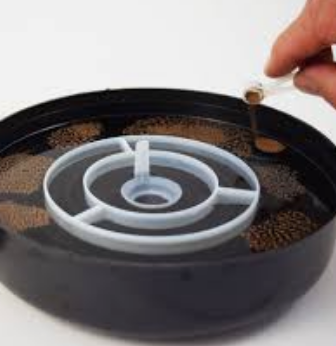 Another vote for baby brine shrimp. It's so insanely easy and my fish go crazy for them. I'd like to figure out how to grow my own phyto at some point but that looks like it takes a lot more work.

Sure-- Hatched Brine Shrimp eggs but use an iced tea jar on a raised platform. That way I could put a container under the spout. Stop the air supply and place a net under the spout. The net turns pink when you collect enough and then pour the water, from the collecting jar , back into the hatching jar and add fresh eggs. Then white worms-- never a success until I put them into a wine chiller. That worked. Live Black Worms-- a real pain changing the water in the fridge but, a tupperware container with a layer of brown paper with an airstone and 1 inch of water. Perhaps a couple of rocks because much easier if worms break sections than laying eggs. In any case a month streches into two or three.

Lukeluke said:
I started skipping the bread after a week or so. I found the worms would dig in, meaning I'd throw them away when I tossed the moldy bread. Maybe wouldn't be a problem once the culture is big enough to eat it all. Is there any reason just yogurt and yeast would be bad? I just put a dollop of the yogurt directly on the mesh, and sprinkle some yeast over it. Worms seem to be doing well so far. Big gross snotty mess of them on the mesh when I check on them in the morning anyway.

I use tortillas instead. They certainly don't moulder as quickly as does bread, and the worms seem to like them, too. I sometimes soak them in yoghurt or selcon to up the nutritional content.

Yes , when we decided on dragonet's we knew we would need a supply of pods First we found which pods would b best and decided on tisbe( column swimmers and rock climbers) and apacocylops( substrate inhabitants). After seeing a lot of complex ways to grow these guys we simplified the equipment w a cheese puff ball container x 1 , adjustable air flow fitting and a pump. It was very successful to grow and harvest these guys

I have raised baby brine shrimp in the past- easy and fast. Don’t really have any spare space now.

I voted "other" as although I'm culturing live foods, I haven't done so long enough to consider it a success yet.

Due to an order of Dr. Reef's QT'd fish coming soon (which includes a Copperband), within the last 2 weeks I've started culturing white worms, black worms, copepods & brine shrimp (got to have all bases covered!). The white worms seem to be ultra easy, hardest part is just to remember to feed them daily, as they are ravenous (they seem to love Hikari sinking wafers, wich I also feed to my black worms). The black worms seem to be going well, but you do have to stir them up every couple days in order to facilitate breaking them into multiple parts, as they're supposedly slow reproducers. The copepods also seem to be doing well. I put 1/2 in my sump (turn off pumps for 30+ minutes daily and dose phyto) and 1/2 in a separate culture, with hopes to continue overstocking my reef from the culture. Hatching baby brine is super easy (I have the BRS hatching dish) but I'm still identifying the right qty/conditions to grow them into adults, which is my plan.

Now, I just need to figure out the best way for me to culture phyto and I should be set. Anyone have any links to a sure-fire KISS method of raising phyto easily?

looking for recommendations for starter cultures.

Phytoplankton, rotifers and baby brine shrimp when I was raising clownfishes. A lot of work and time required to maintain these cultures.

i culture grindal worms. they are so easy and my fish love them. done bbs before too

Magic worm food
Equal parts of Purina cat chow, Gerber baby rice cereal and Cheerios cereal run through my food processor.
I give it to the culture by the teaspoonful so it is easy to not over or underfeed. No mold.
I fold a 1/2 sheet of Bounty paper towel and lay it on the soil and wet it. I do not put any water on the dirt. Just the towels. I place the food on the towel. If I do get it too wet I just put a dry towel in and let it suck up water from the culture. Just fold it a lay it on top of the old one. The worms eat the towels too. I have 3 towel stacks per culture.
I have 4 cultures going. This is the oldest.
11-13-20 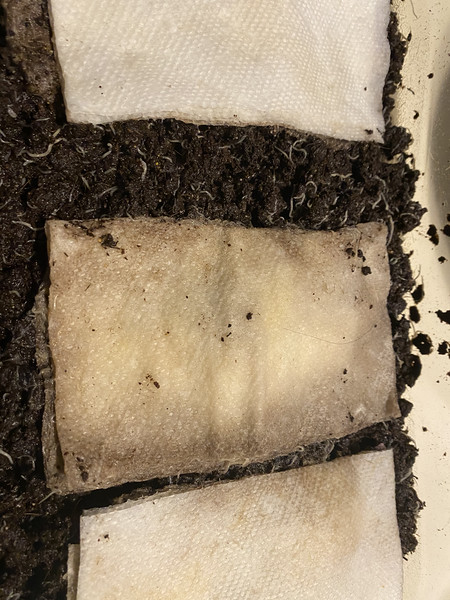 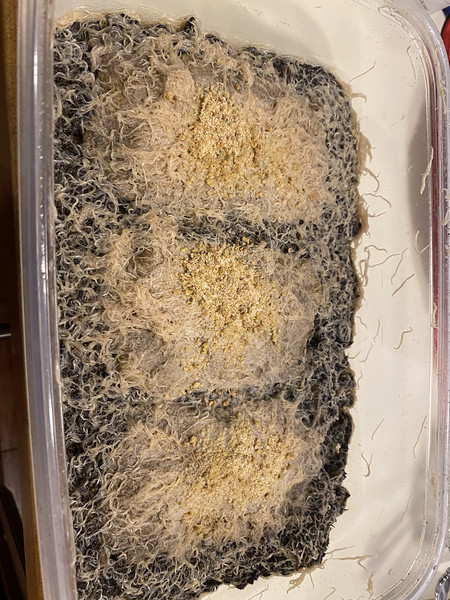 I had flying bugs in my old cultures. Now I make holes in the tops and glue cloth over them with Amazing Goop.
No more flying bugs. Scratch the plastic with sandpaper, make a ring of glue and press a piece of old rag into it. 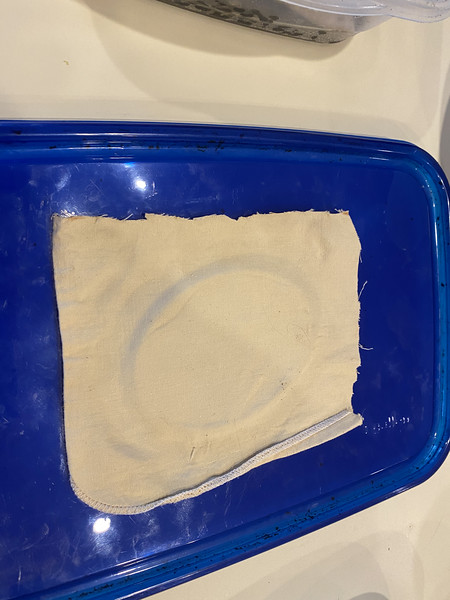 I am now getting enough worms to give some to 3 tanks every day.


PART 2
Dirt - I am using this I got at Home Depot
https://www.homedepot.com/p/Kellogg...oil-for-Flowers-and-Vegetables-6850/205617876
I tried peat, coco fiber and the potting soil I already had. None of it worked. The soil above is the closet to what the worms come In I have found.
I tried the yogurt on bread thing. I didn't find a brand at Kroger they would even come near and the bread molds fast.
I put down about an inch of the dirt above then fold a half sheet of bounty into a rectangle. Then lay the towel on the dirt put the food under it then I moisten the towel. The worms will eventually start eating the towel too. When the towel starts to go I put the food on top of it and put a new one right on it. If you get it to wet just place the towel dry and let it soak up the water from the dirt.

I am feeding a mixture of Purina cat chow, Gerber baby rice cereal and Cheerios that I ran through my food processor until it is mostly powder. 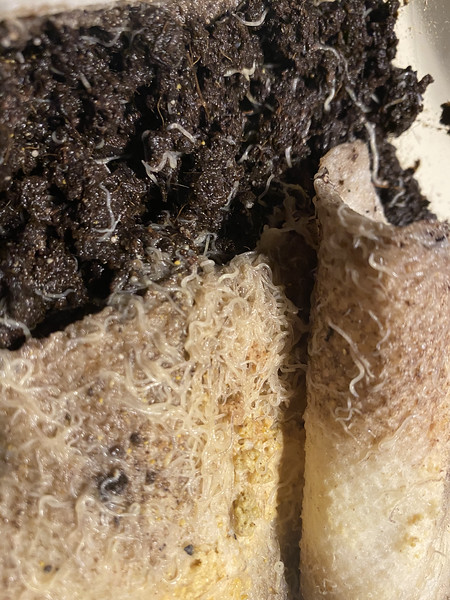 Yes I watched all the videos. My worms never mass up on top of the food. They live in the dirt.
They come on top of the towel once another covers it and are easy to collect then. 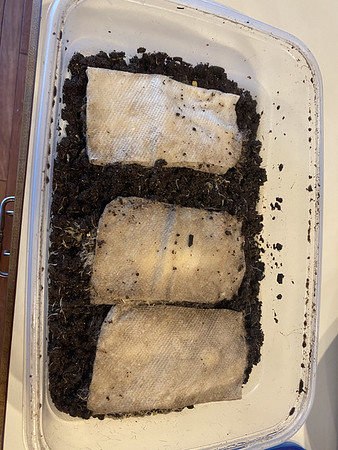 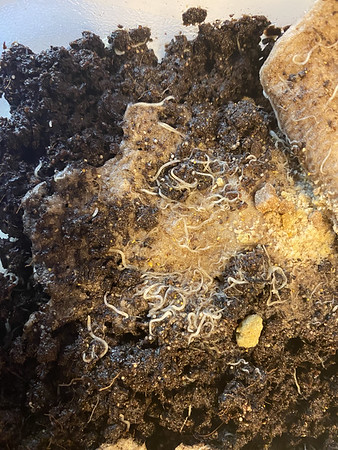 Gnats will grow in the culture. To stop them make some larger holes like 1/2 inch and then glue a piece of cloth over them. Scratch the plastic with some sandpaper and then use Amazing Goop glue to make a ring around the holes and press a cloth into it. This keeps the bugs out. 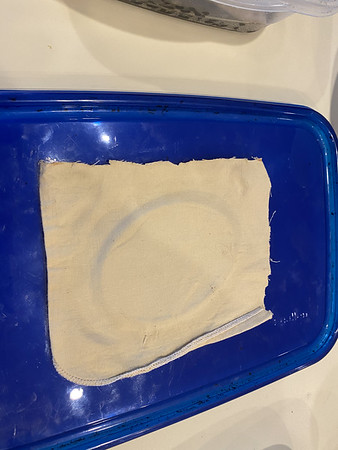 I have found mine only do well if I keep them under 70 degrees. This is my 2nd attempt. The first ones slowly died out over the summer and got bugs. I now keep them in a wine cooler at 56 degrees.
I have started two more using the same methods. Not many worms in them yet. It's only been a few weeks though. 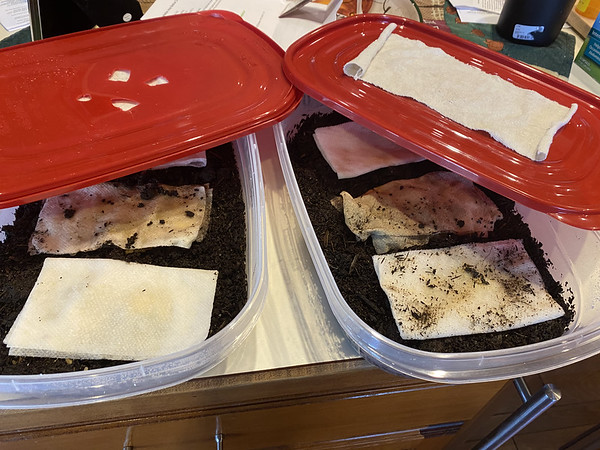 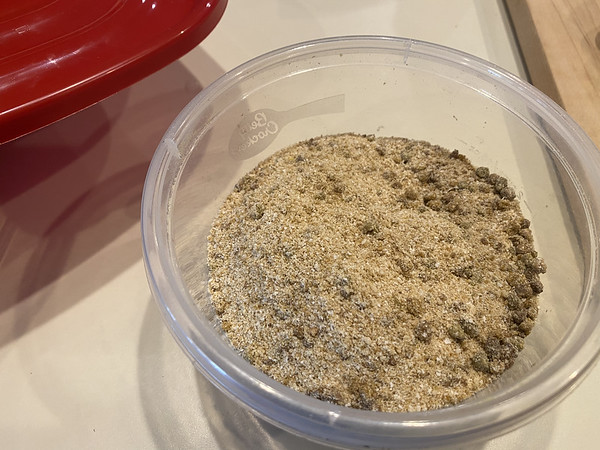 If you want to know more search the net about pot worms. That's what they are called by gardeners.


That was after a long period of trial and error.

This is the state of things this morning.
Pics of the 4 cultures, my food and todays catch. 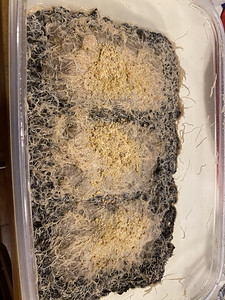 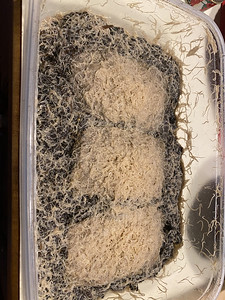 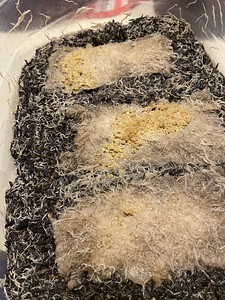 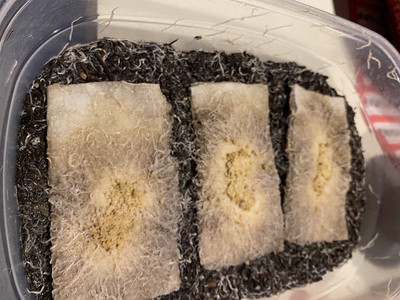 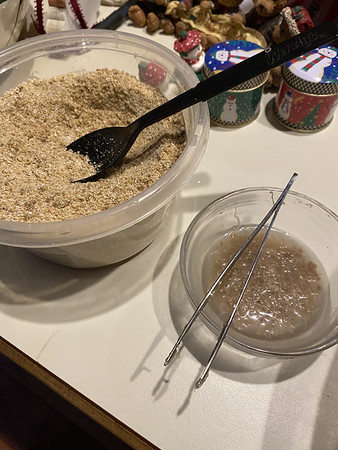 time to give them to the fish. They are escaping. 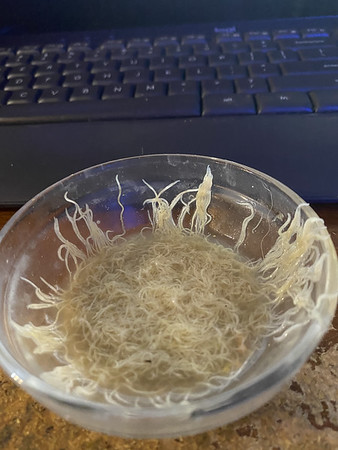 I have been growing copepods and nannochloropsis continuously since 2004.

Where do you get eggs for baby brine shrimp? Also does anyone grow amphipods? Any advice for growing copepods?

BBS using the hatchery dish is the easiest one for me. Takes literally 5 mins. I also culture phyto and copepods with the Poseidon system. Also extremely easy.
Next step, white worms. But don't have those yet.

Rocketfish said:
I did several types of redworms, black worms, daphnia, and vinegar eels for raising Apistogrammas years ago.

I have done some baby brine shrimp, but I found the set up a bit more labor intensive for the amount of brine shrimp I got from it. I saw a new little dish that looks fairly simple and have been thinking about getting one and trying again.

Can anyone give insight on the Brine Shrimp Hatchery from BRS?
Click to expand...

I have the dish one. Few lines about it on my build thread. Easiest thing to use, fully recommend. It takes me 5 mins every few days. Daily harvest is big enough for my 2 mandarins.

Nanno phyto seems to be easiest.

I'm growing 3 types of phytos - nanno, tetra and iso. Just started with iso. Once I feel good with iso, I want to start with pods. 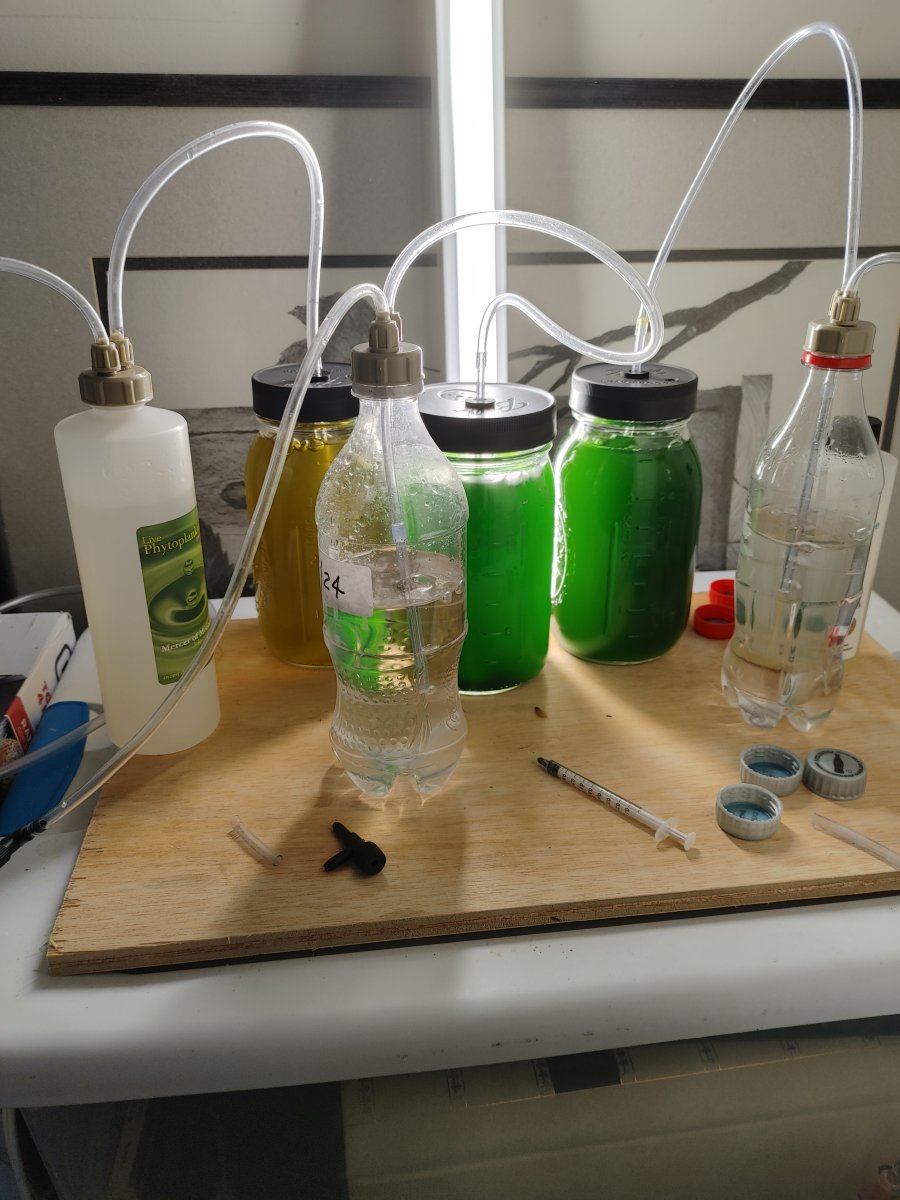 R
What Live food do you think is easiest to culture for your Reef aquarium?
2

QUESTION OF THE DAY PODS: Should you see them in your tank?
2 3 4

QUESTION OF THE DAY How important is coralline algae to you and how long did it take?
2 3 4