A few months ago on a 6 month old tank I had an issue of snails that die for unknow reasons. (no fish, crabs or predators)
They just become slower and slower until they won't able to hold on to anything and just die.
At that time I had something like this on the rocks: 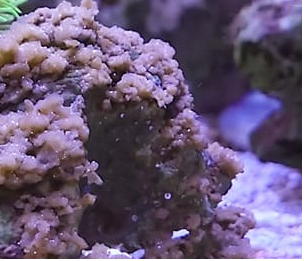 After some time my Po4 went down and No3 stayed normal and... short story... cyano. Lots of it, covering everything. (cyano confirmed with microscope)
During this time tank looked like crap but no snails died.
After months of fighting trying every method possible. Unable to get nutrients up, killing corals despite all attempts I used erythromycin a few weeks ago.
Worked like a charm, some small dino patches here and there but got solved naturally fast as I kept a hawk eye on tank parameters to avoid swings. Tank is now 1 year old...so yea ,about 5 months of fighting cyano. (I got enough of it)
Today, No3 is around 3-4 and Po4 around 0.05.

Trouble is, that the stuff above appeared again and of course, snails begin to die again.
This is under microscope:


What is this? Is this killing snails? How do I get rid of it?

aaagh.
This is chrysophytes, but I do not think we have had reports of it killing snails before. However your snail behavior (increasing lethargy, eventually death) is very much how algae toxins would be expected to behave.
OP

Yes, comparing google results with what I have, indeed looks like it is some sort of chrysophytes. Strangely they don't seem to be toxic. So I wonder what's up with snails. Anyway, thanks for info, now I need to figure out how to deal with this.

thats wierd i had the same thing happen to a Mexican turbo a while ago did they constantly retract into their shells like they were having a seizure?

P
Diatoms or something worse?

Help with I.D. Bubbles on rock.