How Much Can Lighting Spectrum Change the Actual Color of SPS?

Could you explain? If I understand the top coral is a more blue spectrum, the bottom is more white spectrum, 10k?

brahm said:
Makes sense, I have the same corals often in different places under the same lights and they don’t always colour up the same. What this does for sure remind me is I need a frag of pinky
Click to expand...

Yeah, my Pikachu has turned a shade of green since bringing it home. It was a cool yellow when I bought it from the store’s display tank. I’m using AI Hydra 32 on the David Saxby setting.

gws3 said:
Ok, this was a rhetorical question. The answer is a lot. Check out these two chunks of pinky the bear I cut from a large colony that was shadowing other colonies. The colony is lit by a combo of Radion G4 Pro / Blue Plus T5 / Reefbrite XHO in my one display.

The top piece I cut a couple months ago and put in a tank lit only by Radion G5 Blues. The bottom piece I just cut last weekend. They were both cut from the same exact colony.

I was blown away by the difference. Figured I’d share. 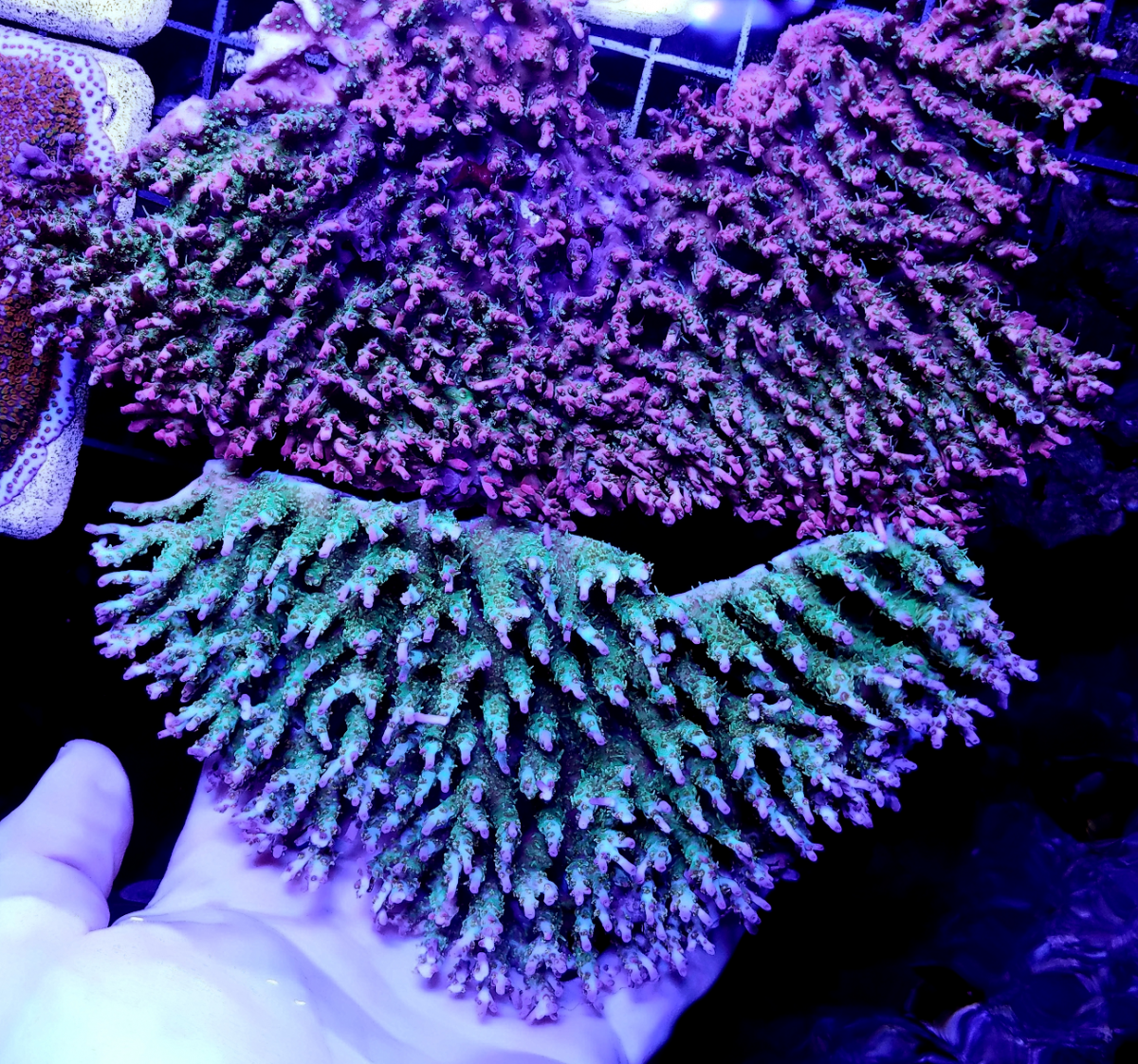 This is a question a little off topic, but has anyone ever seen changes like this by changing the settings of their existing lights?
OP

Robinson said:
Nice growing and observation. This make me think about what is contributing more to the difference on the bottom frag; the t5 or the Reefbrite?

Always have been a fan of Reefbrite and currently run some in my tank.
Click to expand...

Personally I suspect the difference is mostly caused by the predominant lighting, the difference between G4 Pro and G5 Blue. The G4 Pro is really a mixed spectrum or whiter light, while the G5 Blue is pretty darn blue. I only have two T5s on that tank to help with shadowing and smoothing out the light spread, and the reefbrites are for more pop and spread as well.


jda said:
As you have found, it can matter a lot both in actual color rendering and also illumination.

Always found that more daylight made the best actual color in the coral. You gotta blue-them-up to look at 'em, though.

What is nuts is that some acros don't seem to mind different light and look near the same under many different types. This is why some will just never understand this since they have an acro or two where it doesn't matter and they assume that all act this way.

Then, you have arguments over which looks better - I am a contrast guy. I prefer the look of the piece on the bottom, but many others will disagree.
Click to expand...

Not sure I agree with your second sentence. Not trying to argue by any means, just providing illustrating a different experience.

A few years ago I switched out all my radium halides for G5 blues. Folks were always surprised I was still running halides at the time. But I wanted to make sure LED performance was mature enough that I was taking a step forward not back in terms of coral health and coloration. Personally I think radions got there by G4/G5.

I have to say when I went to G5s I started pulling better colors (actual coral colors not just rendering) on most of the SPS. I really am convinced strong blue lighting is better for most corals, personally. Now there were a number of corals that were without a doubt happier under the spectrum of the halides. I imagine these corals came from shallow waters in nature where the spectrum is more white.

Completely agree with the third sentence. For instance a solid green SPS is always solid green no matter what. And a lot of other corals with more complex palettes. Now some of the rainbow tenuis, they change colors like crazy under different conditions in my experience.


ceaver said:
Super interesting! Are you able to say which of these two is more representative of how this piece "normally" looks?
Click to expand...

In other systems Pinky is somewhere between the two. Usually it has that green at the base, especially in the center where the growth is older, and the purple on all the branch tips.


blstravler said:
Very interesting - do you run the G5 Blue all channels at 100%?
Click to expand...

Nope. When I set them up I adjusted them to what looked good to my eye. On tanks where I supplemented with reefbrites I turned the blue channels down a bit. On my main display which also has blue plus T5s and reefbrites most channels are 100% with cool white, cyan and lime at 50%. On the tank where I just have the G5s I have all channels at 100% except Red is at 50% and Cool White, Cyan and Lime are at 25%. I don't like running cyan and lime at 100%, it adds a green hue that is unappealing to my eye. Now from what I understand is people see colors differently, so what may be unappealing to me may be appealing to someone else. So to each their own.


DannoOMG said:
And both those cuts are completely healthy? Just different color?

I dont deal with acro's. I just lurk.
Click to expand...

Yup, they're both doing great. The top piece had some shadowing towards the center when I first cut it and was starting to get a bit pale there, but it bounced right back after cutting and moving it.


ninjamyst said:
Could also be flow right?
Click to expand...

Yup, flow could definitely be a factor. Subjectively it's in a similar level of flow in both tanks, and my gut tells me the difference is mainly cause by lighting. But flow can certainly have a huge impact in some cases, so you are correct, it should not be discounted.


Reefs anonymous said:
Could you explain? If I understand the top coral is a more blue spectrum, the bottom is more white spectrum, 10k?
Click to expand...


ClownSchool said:
This is a question a little off topic, but has anyone ever seen changes like this by changing the settings of their existing lights?
Click to expand...

I can't say I have, but I typically set spectrum and never change it again. Sometimes I bump up intensity as corals fill in, but I can't think of anytime I've ever changed settings on the same light to something significantly different.

Can I use chemipure blue and carbon together? Can I completely cut out white spectrum for a few days?

The Benefits of Captive Grown Corals