If you could go back to your first reef tank….

I've had/have 2 tanks not counting the 40gal observation tank or previous qt tanks. First was a RS Max 250c. It was an awesome tank until I had a disaster strike (noxious primer used in 1 room that crashed both tanks). Current tank is a 125g

Going a 60g AIO tank was a good choice for a beginner. I learned a lot and had lots of room. And lots of success. When I decided to upgrade, then I made my mistakes:
1-Too eager to buy and wanted a used tank to save money--read: wanted it now. Got an aqueon 125g with twin overflows. 72x18x22.
a) not the nice starfire glass and scratches and the silicon not perfect. Knock on wood here that it has held. If I knew now.... I'd have passed
b) tank not wide enough for aquascapes with the overflows taking up valuable width. Managing flow a nightmare
Not going high end equipment like powerheads. They keep failing. And lights. Did better with the second set but they still might be good enough but are okay. Also forgot to rinse the marco rock so have had issues from day 1
c) used too fine a sand. Changed it a year ago.
this tank has been a disappointment from day one so lesson learned, go with what you ultimately want. No regrets on the 1st tank. A great learning tank.

Waiting on my dream tank right now--Oct 6th. RS Reefer 3xl900. Will have the width, nice overflow and more than enough room. Plumbed for 2 returns for redundacy. And I'll have my beloved starfire glass. Also went high end equipment: RS 900 skimmer, 2 RS 45's gyres & doser and 4 RS 160s lights. Also 2 mp40s and apex (which I have to learn in a m onth!) Also went with Real Reef Rock and Caribsea. Also doing a salt water mix station in garage with ATO and AWC instead of brutes in the kitchen. In short, dream tank, trying to do it right this time. There won't be any larger tanks for me. Oh, have 2 battery back ups

also learned to pay attention to corals. Had a blue toadstool that became massive. What I didn't realize, with the clowns using it as a host, was it was probably irritated all the time and putting toxins/chemical warfare in my tank. It continued to kill any LPS or SPS I tried. Only a handful of softies lived with it. It's out and gone and so far, the new corals are surviving!

60gal before crash. Everything growing well. esp duncan with over 30 heads 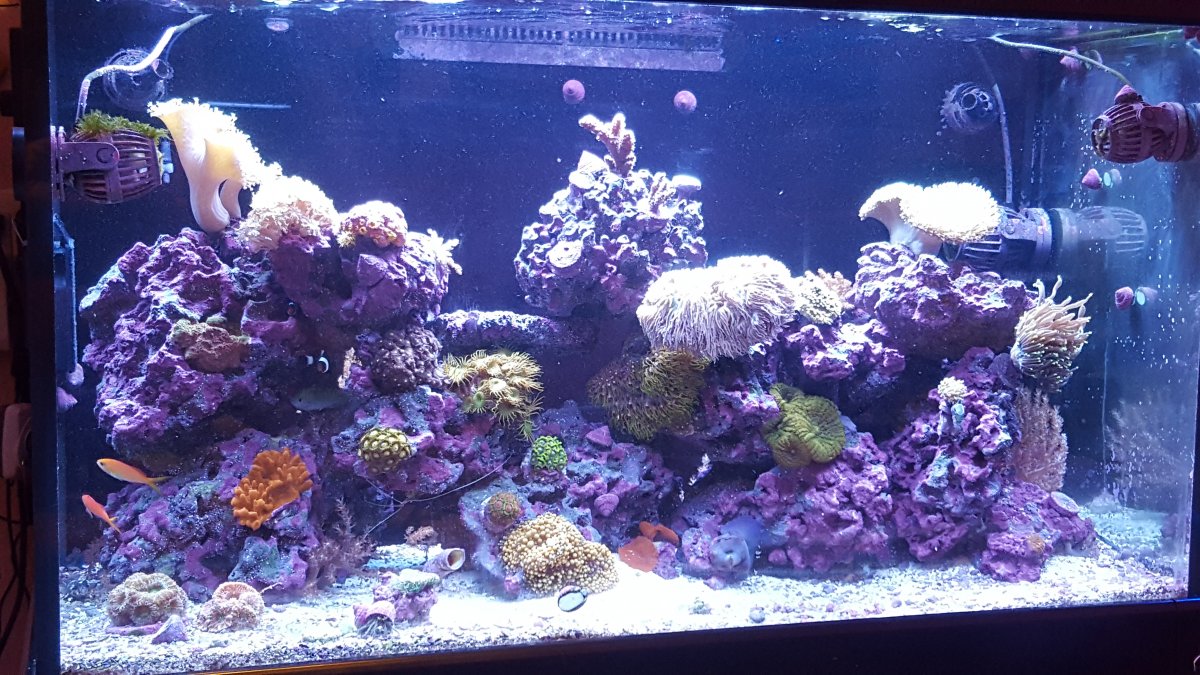 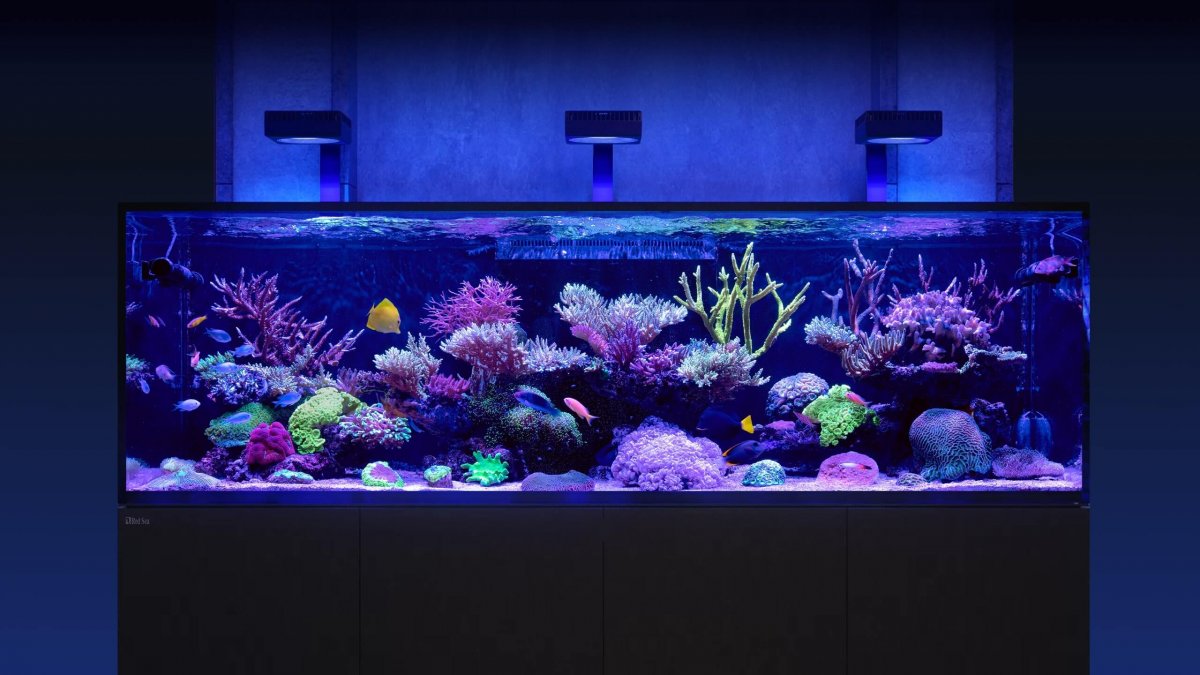 No more leathers! Except maybe a weeping willow... Which I will keep controlled and maybe keep in the 40 gal 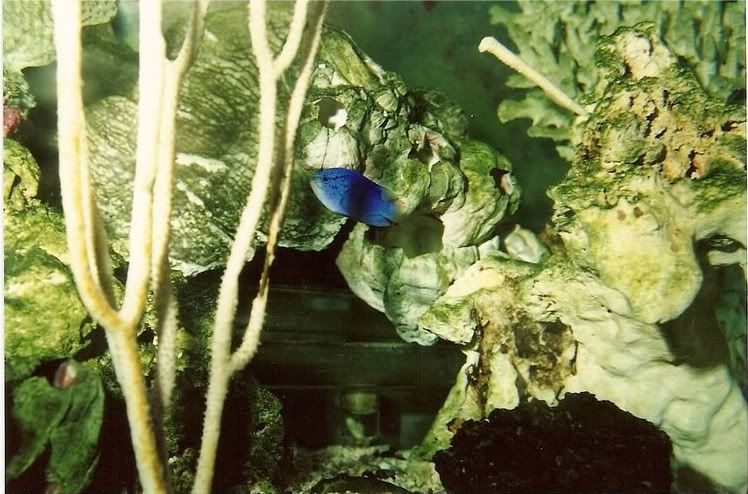 would have gotten a chiller

I would have told myself "save your money, buy a million dollar home on the water in 35 years".

I would have put my RO/DI system in the garage - instead of the kitchen - and saved myself a few thousand bucks on new hardwood flooring. Also, I should have read the chapter more carefully about Alkalinity. When I read that 6 to 12 dKH was acceptable, I missed the part that whatever number you pick needs to be STABLE.

bReefedBaker said:
If you could go back to your very first reef tank, what would you have done differently that you know now? Even with your current aquarium, is there something or anything that you wish you had done differently?
(I’d like to see what others have learned and applied since they’ve begun the hobby)

- Would you have started with a bigger tank?
- Would you have chosen a different substrate or gone bare bottom?
- Dry Rock vs. Live Rock
- Aquascaping
- Aquarium location

We all learn from our mistakes. If there was just one thing (or a few) you could tell a new reefer just beginning the hobby what would it be?


— For myself, I’ve learned a tremendous amount and still learning daily —
I’d have to say, I learned to never rush the aquascape. I began with some great aquascape in my eyes, but that quickly changed. I’ve moved my rock countless times to make it just right for the actual aquarium livestock. I also believe I would’ve gone with a shallow substrate compared to the common 1” bed. Lastly, I regret buying coral from a reef shop that was attached to true live ocean rock and the hitchhikers were astronomical. Trust your sources as well, because not everyone is in the hobby for your pleasures. Some may be in it to just make a buck off the uneducated. #happyreefing #reeflife
Click to expand...

I would have know more about the equipment needed and most importantly the fish themselves. Mine was an Asfhur Angel and had no idea what he needed but he was pretty which motivated the purchase. Given what I know now...man I was uninformed and stupid as to marine fish and reef keeping.
R

In 1987 I had a 60 gallon "FOWLR" tank, with fluorescent fixture 3 bulb, Eheim canister filter and HOB filter. About 2" sand cover, 17 lbs of "hot live rock". Biggest mistake was not having a cover on the tank- evaporation leading to "salt creep" made a mess! It was so bad the wife said enough, salt over the rim, on the wall, etc lol. Better lighting, more live rock, and a tight fitting cover would have been a major improvement.

I think like most, I'd have gone bigger to start with and MOST definitely, would have shelled out more on tried and trusted equipment, rather than trying to do it the cheapest way first. IMHO, the whole 'budget reef' is the most expensive way to start. I've got quite the collection now of 'cheap' wavemakers, lights, filters and pumps, media, tubs, RO systems, etc...

Hindsight is always a beautiful thing

I wish I would have learned that this is a game of balance and trading. That it is all about the formulas that have been paved so we can follow to have great success.

I wish that I would have picked a good secure pathway forward with a designated fish list and plan to put my tank together. This would have helped me not move the live rock around so much and would have helped give me a better direction to learn proper maintenance for the set up I would enjoy taking care of.

one thing I am glad I listened too! Bigger is better! I have 2 tanks rn a 150 with a 30 gallon sump and a 20 gallon QT. I listened and got a deal on a used 150 gallon set up and it is so awesome! It helps with keeping balance easier. However the 20 gallon is finicky and kinda drives me nuts like that one car we have all gotten in and hated because you barely touch the break and everyone flies thru the windshield!

I wish I would have gotten all the water checkers before I even bought the tank. That way I had time to figure it all out before I needed it.

I wish my wallet was prepared for the hobby because expensive+colorful=beautiful+empty bank account. (I have even toyed with the idea of getting a part time job to get more reefing stuff!). Maybe they should have put some big warning labels “caution extremely addictive” and “caution, point of no return” maybe “your wallet may never recover.”
All jokes aside it’s a piece of peace in my life which helps me tune out all the noise from the media and news. I’m finding I have no time to waste of things that don’t matter. I wish people would have gotten me hooked sooner.

If you could go back to your first reef tank….​

I would NOT! Like many others I walked in with a little internet knowledge??? etc and guidance from a small store. I started with a 50 gallon hex? Moved to a NEW! 60 gallon cube w/ sump.... which blew a seal at 3am!!! Water everywhere. Then temporarily??? Got a fluval evo 13.5 while I researched. Now, I have a Waterbox Marine X90. Love it!! But can't sell the evo.. nobody wants it! Hahhahahaha. 4 years later, I've love this hobby. Corals are only softies. I believe in water changes, All4reef AND feeding live clams and mysis. Im Still learning.
Last edited: Aug 28, 2021

QUESTION OF THE DAY Do you want to re-aquascape your reef tank? Click ahead!
2 3 4

What I learned from my first reef tank